from the gorgeous beaches of the Caribbean to the pristine slopes of Aspen to the chilly boulevards of Europe, celebrities had quite a few adventures in January. If you’ve been saving your pennies for a bucket-list trip inspired by Lifestyles of the Rich and Famous, dive into the list below of the top celebrity travel spots in January 2022 — and take note of how much it’ll cost for you to go there, too.

We hope you love the paces and stays mentioned below. Just so you know, Matador may collect a small commission from the links on this page if you decide to book a stay. Listed prices are accurate as of the time of publication.

Singer Camilla Cabello soaked up some sun and sailed the high seas during her vacation to the Republica Dominicana (a.k.a. the Dominican Republic). While she didn’t mention where she stayed, it was likely in the popular tourist area of Punta Cana. As far as celebrity travel spots go, it’s fairly affordable. According to Hotels.com, five-star beachfront hotels in February in Punta Cana like the adults-only  TRS Cap Cana Hotel start at around $150 a night. But it’s likely Cabello stayed at one of the area’s more luxurious properties; we’d guess the Eden Roc at Cap Cana ($1,600+ per night), the Zoetry Agua Punta Cana ($1,700+ per night), or the Iberostar Grand Bavaro ($730+ per night). Oh, and that yacht photo? Rentals in the DR start around $100 an hour for small private yachts, according to GetMyBoat.com.

Paris Hilton celebrated the New Year with her new hubby, Carter Reum, deep into the South Pacific. The pair shared a smooch at the Waldorf Astoria Ithaafushi Resort in the Maldives. Depending on the size of the villa, winter rates for the over-the-water options start at around $4,400 per night. Of course, Hilton and Reum likely stayed in one of the more luxurious rooms — the two-bedroom over-the-water villa with a pool will set you back $9,000+ a night in February. But we suspect she may have some family connections to get the rate down a bit.

The “The Real Housewives of New Jersey” star (and former inmate) Teresa Giudice rang in the New Year with her fiance, Louie Ruelas, a bit closer to home. Though she may be known for on-screen drama, Guidice enjoyed the fireworks (rather than starting them) at Taboo Los Cabos Resort in Mexico. Taboo Cabo is a Beach Club located in the five-star hotel ME Cabo, where the average cost per night is roughly $400.

Actor, TV show host, and — hey, who knew? — Broadway star Mario Lopez and family strolled along the beach at the Beaches Resort in Turks and Caicos. The Beaches Resort is an all-inclusive resort catering to families on 12 miles of beach in Providenciales, the most popular tourist city on the island of North Turk. Rooms start at $1,000 per night, but judging from Lopez’s photos, the family likely stayed in one of the resort’s villas with private butlers, which start around $2,100 per adult, per night, according to Hotels.com.

TV host and model Sylvie Meis frolicked in the crystal clear waters of St. Barths to ring in the New Year. St. Barts, officially called St Barthélemy, is part of the French Caribbean just east of the British Virgin Islands. It’s known for being one of the most popular luxury celebrity travel spots, attracting names like Leonardo DiCaprio and Dua Lipa. Meis tagged herself at the Shellona Restaurant at the five-star Hôtel Barrière Le Carl Gustaf. According to Hotels.com, a mid-week stay in February starts around $2,900 per night, with a three-night minimum stay. If that’s a bit out of your price range, consider the Hotel Villa Marie Saint Barth or Tropical Hotel St Barth, both of which start at $955 a night — St. Barths isn’t kidding around when it comes to luxury.

A real housewife from a different franchise, Kyle Richards of The Real Housewives of Beverly Hills hit the slopes in Aspen with partner Mauricio and their adorable pup Storm. According to Trip.com, the average cost of a five-star hotel per night in Aspen is $2,400 during the winter. If you need a lift ticket, you’ll pay $194 per person per day in the peak season, and a private, full-day ski lesson will set you back $889 per person. But by those standards, gear rentals look downright cheap at $71.16 a day for skis, poles, and boots. If you’re willing to stay a few minutes away from the slopes, the St. Mortiz Hotel is usually closer to $200 a night mid-week.

Despite the chilly weather, Chrissy Teigen and husband John Legend took their children to the historic streets of London. The family seemed to get confused by the difference between London Bridge and Tower Bridge, though they learned the difference (according to their Instagram captions, at least). It seems from photos that the fam stayed at the Rosewood London, where the most basic rooms start around $600 a night in February.

The recently engaged pair posted a few snaps from what appears to be a quick getaway to Italy’s Lake Como, near the Swiss border. The two bundled up in furry winter coats for a ride on the lake and strolled through the cobblestone streets, though they didn’t say where they stayed. While Lake Como is actually somewhat affordable in the winter, with four-star hotels like Hotel Castello Di Casiglio and the Albergo Terminus Hotel starting at under $150 per night, they most likely stayed at a luxurious hotel such as the Vista Palazzo (starting at $780 per night in February) or the famous Mandarin Oriental, which starts at $760 per night.

What will be the celebrity hot spots in 2022? 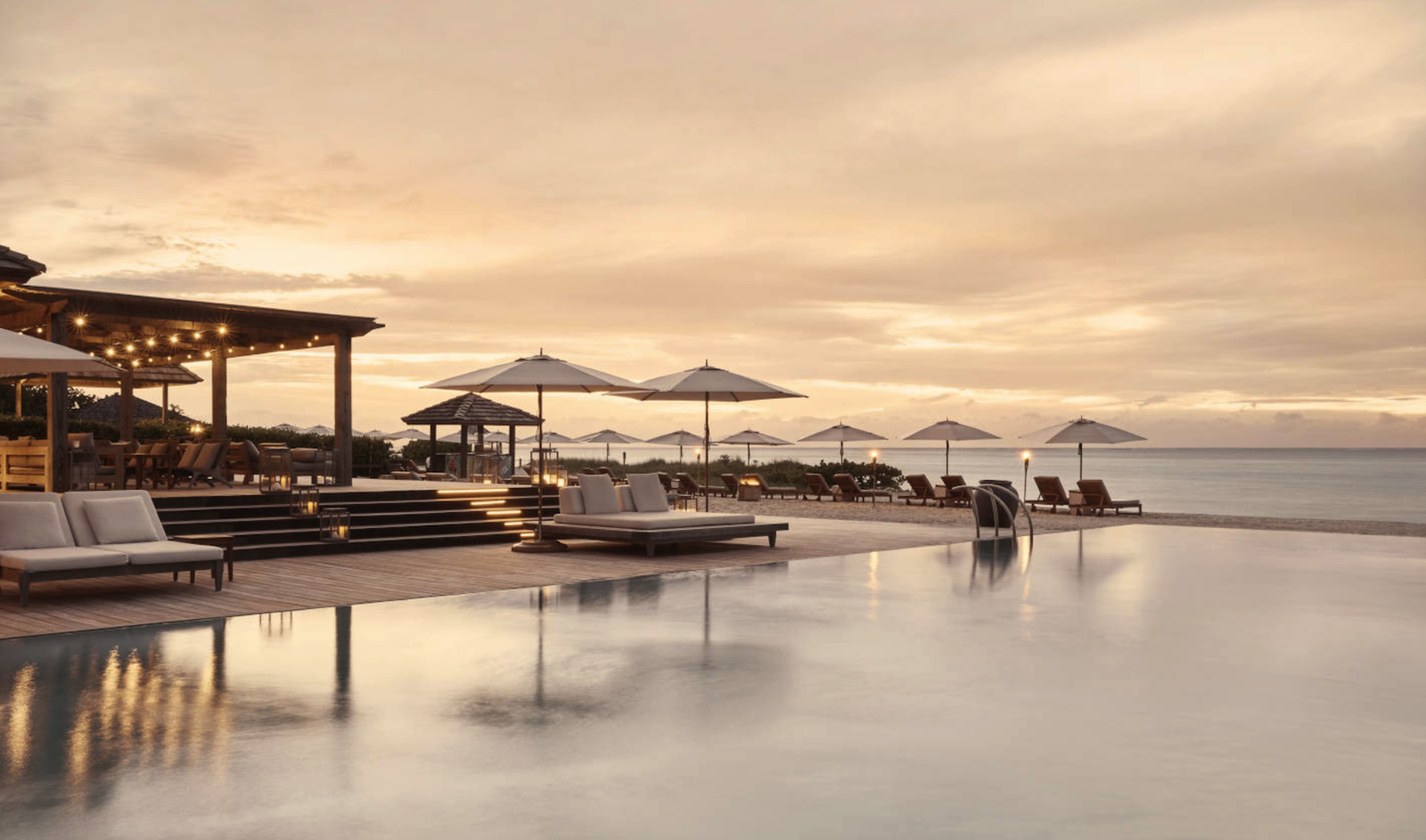 According to Brian Harris, owner at boutique luxury travel agency Aspen Travel Advisors, you can expect to see more trips from celebrities in 2022, rather than multi-country trips. “COVID regulations have complicated border crossings and wealthy travelers are much more hesitant with complicated itineraries. Simpler itineraries, slower travel, and longer duration trips are more common now.”

Oh, and if it seems like celebrities, influencers, and even average Joes are filling their feeds with travel photos more than ever before, you’re not wrong. “‘Revenge travel’ is a real thing,” says Harris. “Travel was taken away from [wealthy travelers] entirely, new regulations have complicated travel itineraries, and an explosion of net worth from investment and a lack of travel spend has created a bigger demand for travel than we have ever seen. We are making hotel reservations at $5,000, $7,000 and even $10,000 per night.”

Harris says that the top necessities of his wealthiest travel clients include exclusivity, privacy, and space. He’s booking remote destinations instead of urban escapes. “We have one family who books a separate bungalow for each family member and an additional hotel room for extra private space as they sometimes have to remote broadcast on CNBC,” he says.

So where are the wealthy, privacy-seeking who’s-who going in 2022? Harris thinks three international destinations will be the next hot spots — French Polynesia, Fiji, and the Caribbean — as well as one domestic location: Hawaii.

In French Polynesia, he thinks you’ll see celebrities staying at resorts like The Brando, a private resort on a former royal Tahitian island; and Nukutepipi, a resort on a private island where the only option is a week-long buy-out for a cool $1 million.

In Fiji, he’s seeing interest around private islands like Laucala Island, the largest private island in the world, which offers private yachts and submarines, among other offerings. (It’s also entirely self-sustaining).

And finally, if you’re heading to the Caribbean, head to Parrot Cay in Turks and Caicos, a resort co-owned by celebrities like Keith Richards, and Donna Karen. Harris thinks St. Barths will continue to be popular, and is also exited about a small island known for being a celebrity hide-out: Mustique Island. Don’t be surprised if you haven’t heard of it — many of the island’s rental homes start at more than $50,000 per week.

CelebritiesThe Oscars Are Coming, and These Are the Best Places in LA To Spot the Stars
Tagged
Celebrities Entertainment Lux Travel
What did you think of this story?
Meh
Good
Awesome