Buffalo may have the wing, but in Miami, we’ve got the strip.

Not strip clubs. Not “the strip” along Ocean Drive. Chicken strips, the deep-fried, often-breaded bar-food favorite that you can eat in Miami unlike anywhere else in the world. No, we didn’t invent the chicken strip, nor did we perfect it. But you can have more fun eating them here than you can anywhere, and that is why Miami is king of the chicken strip.

Before we get started, yes, I’m well aware there’s a difference between chicken strips, tenders, fingers, and boneless wings. There’s also a difference between Miami and South Beach, but much like LeBron and everyone else doesn’t seem to care about that, nor do I care about poultry nomenclature. For today’s purposes, any oblong piece of white meat deep fried and served with a dipping sauce is a chicken strip. If this works you up, you probably need to get out more.

And what better way to get out than spending a day eating chicken strips all over Miami? Laugh — or cluck — all you like, but let me run you through a chicken-strip-eating itinerary me and some friends did as part of our annual chicken strip tour.

“Chicken strip tour?” you ask? “Not wings?” No, not wings. Wings have bone and gristle and all kinds of stuff I personally don’t care for, which is why me and my friends began a tradition of going to as many restaurants as we could in a day in different cities and eating chicken strips. We’ve been doing it for 16 years, and have hit Vegas, Seattle, Vancouver — lots of places. And nowhere came close to Miami.

Now, can you find any one of these experiences in another city? Sure you can. I’m sure you can find some good chicken strips to take to the beach in San Diego. And Vegas allows you to say you’re going on a strip tour of the Strip. But is there another city in the world where you can lounge in a lazy river, float on a pink flamingo, lay on the beach, take in the sunset from a rooftop bar, cheer with passionate and attractive football fans, then finish the night at one of the most famous clubs in the world, all with a chicken strip in your hand? No, friends, no there is not. Unless you make your way to Miami, which quite simply does chicken strips like no place else on the planet. Dale!

Follow along and you’ll see why you’ll never find another city better to eat your body weight in dippable fried chicken.

Stop 1: The water park and the lazy river 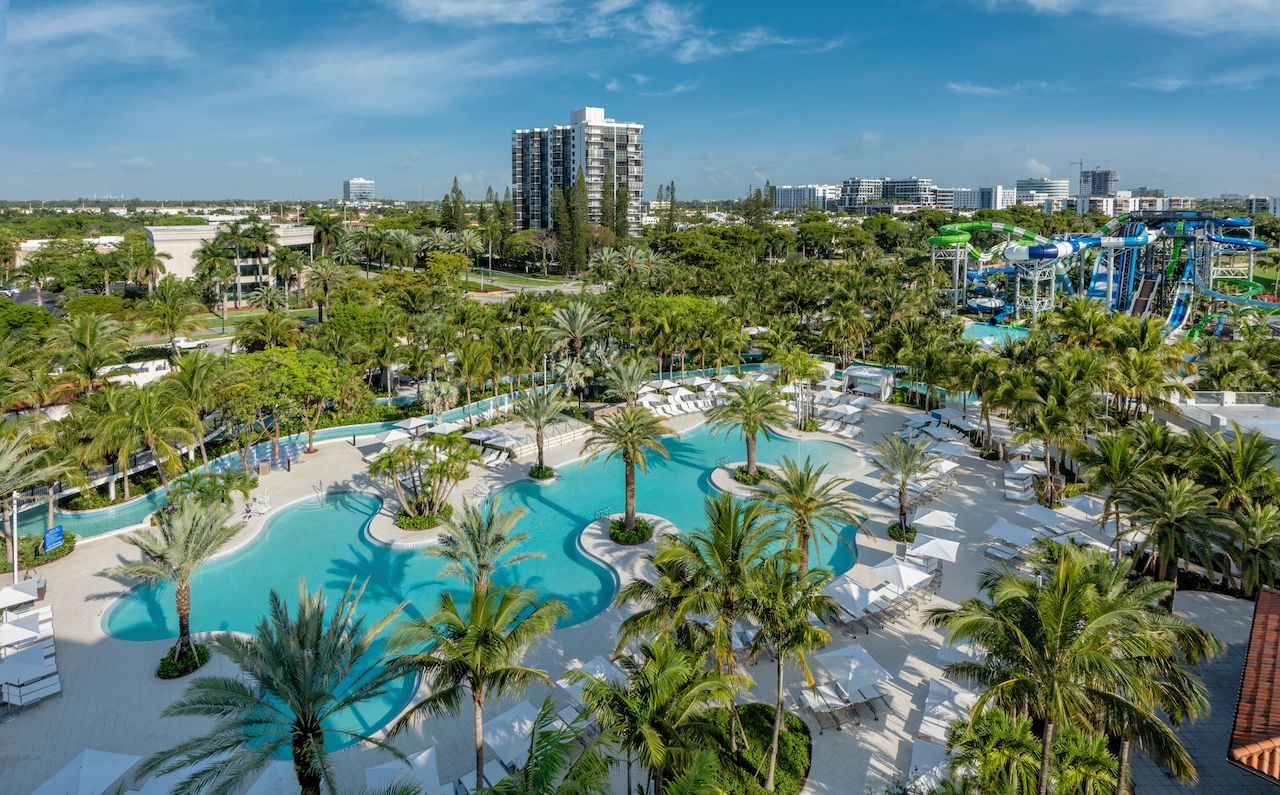 In Miami, you can start your day ordering strips into the lazy river at Tidal Cove, a place best described as a dayclub with waterslides. This park is at the JW Marriott Turnberry and offers private bungalows with beach chairs and friendly waiters who deliver your strips with fruity mixed cocktails (or whatever else your stomach desires).

You can devour your deep-fried goodness in the comfort of said cabana, but you’re best served to take it with you on a float through the lazy river, enjoying every bite like your inner eight-year-old would want you to. And when you’re floating with your strip through Tidal Cove’s chlorinated Amazon, passing under palm fronds and past massive waterslides, you’ll wonder why during your childhood you wasted so much time at snack bars. 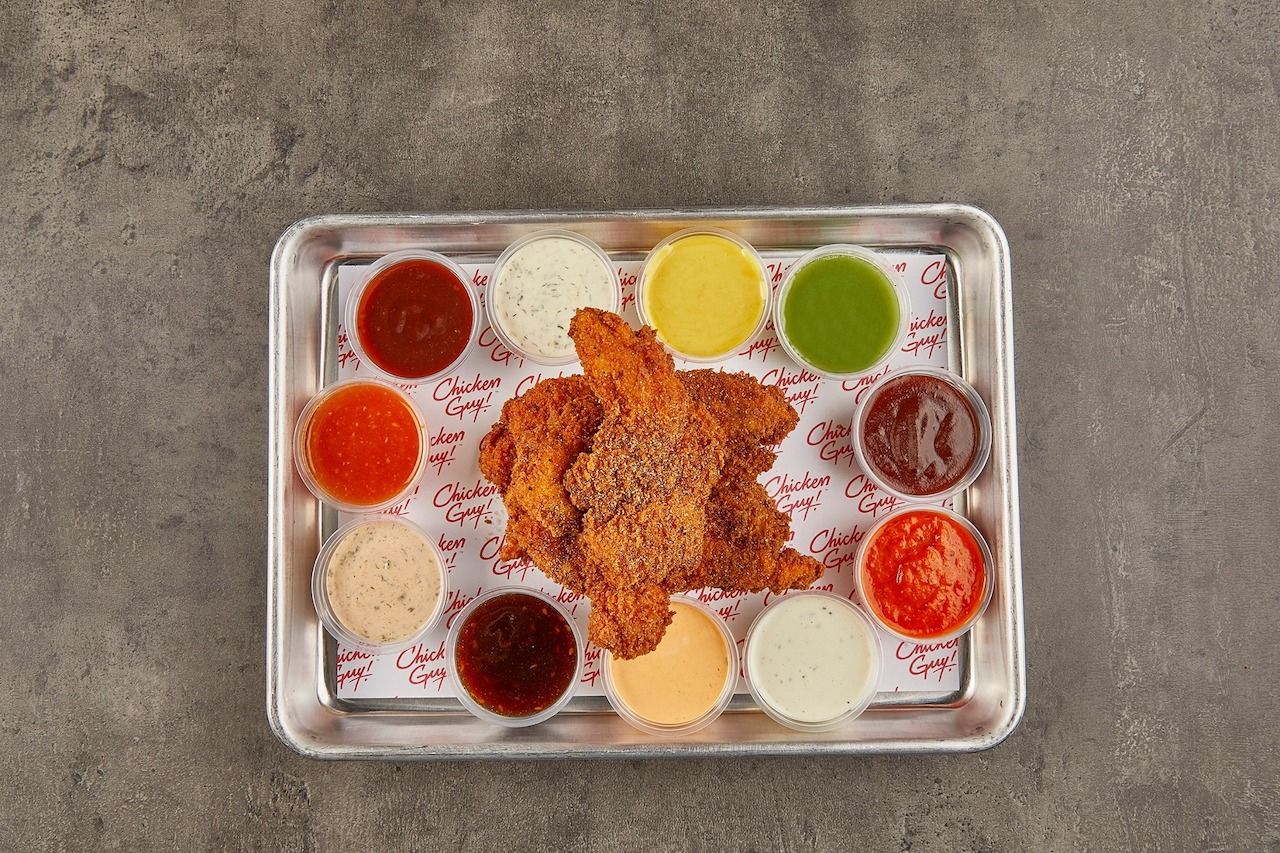 Miami is nothing if not a magnet for celebrity chefs. Just a short drive from Tidal Cove, Guy Fieri has an outpost of his Chicken Guy strip emporium at the Aventura Mall. Here, you can try strips made by arguably the most famous chef in America at the moment and even take a picture in front of a life-size cutout. Of Guy, not the chicken. 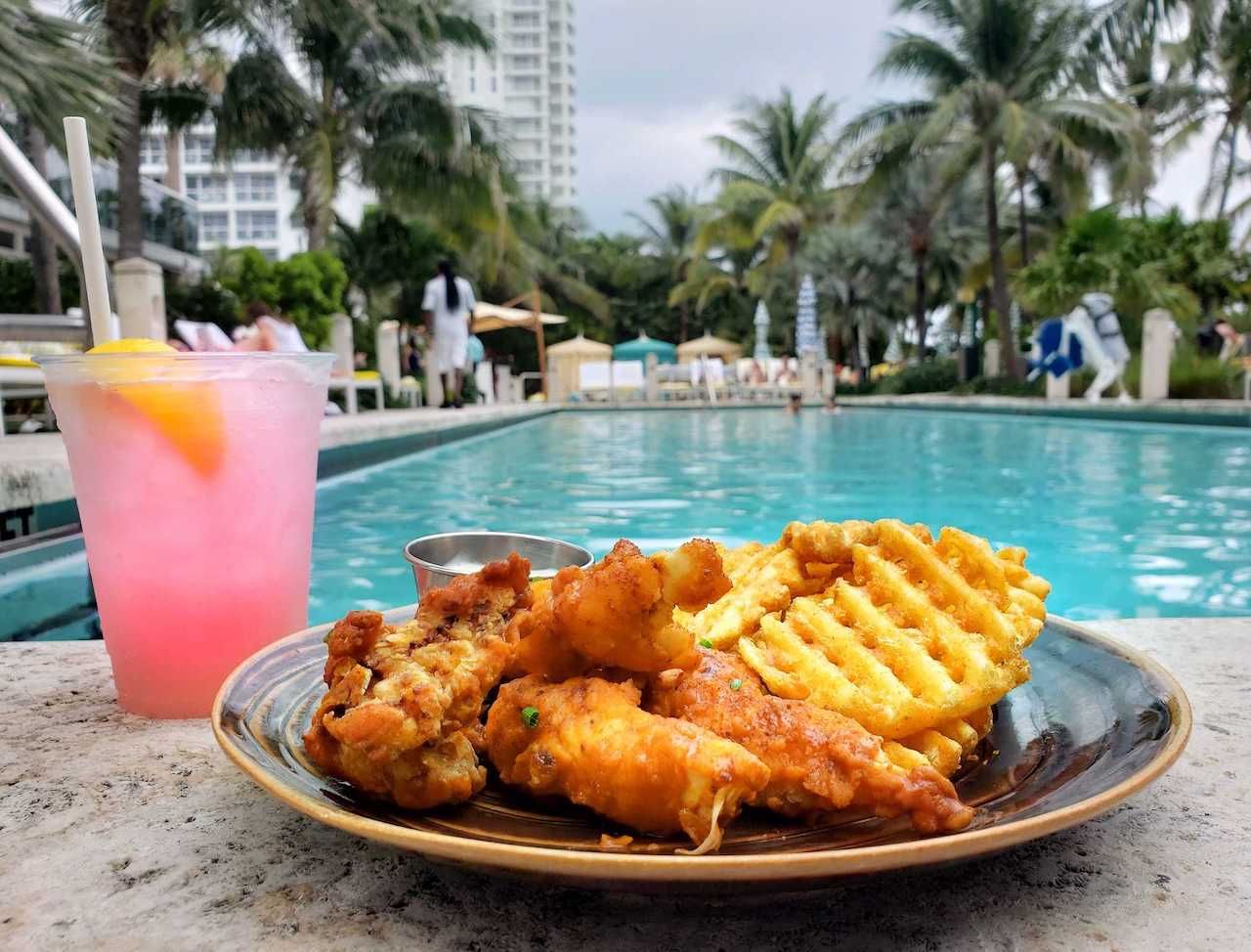 No trip to Miami is complete without an oversized floatie selfie from a fancy hotel pool. And you know what tastes especially good on top of said floaties? That’s right, chicken strips. At the Confidante Hotel in Miami Beach, you can refresh your oily palate with a fruity gourmet popsicle paired with a craft cocktail, then call the pool’s Floatie Concierge to blow up a giant floating flamingo for you to ride through the pool. While riding, call a waiter and have them bring you chicken strips as you tour your plastic stallion through the kingdom you now own.

Stop 4: The Pub Sub on the beach

If two things signify Florida more than bad drivers and Medicare fraud, it’s beaches and Pub Subs. Pub Subs, for those who’ve never had the pleasure of listening to a Floridian talk about them for an uninterrupted hour, are sandwiches from the deli at Publix, a Florida-based grocery chain. They come in many varieties, but the signature sandwich is made with chicken tenders, which you can have tossed in any sauce you want.

One of the great Miami traditions is getting a Pub Sub, throwing it in a cooler with a dozen of your favorite beverages, and taking it to the beach for the day. The combination of the hot, peppery breading and the cool, soft sandwich roll is both refreshing and satisfying on a hot beach day. It tastes especially glorious when devoured on the sand after a quick trip into 88-degree ocean water.

Stop 5: Strips on a boat 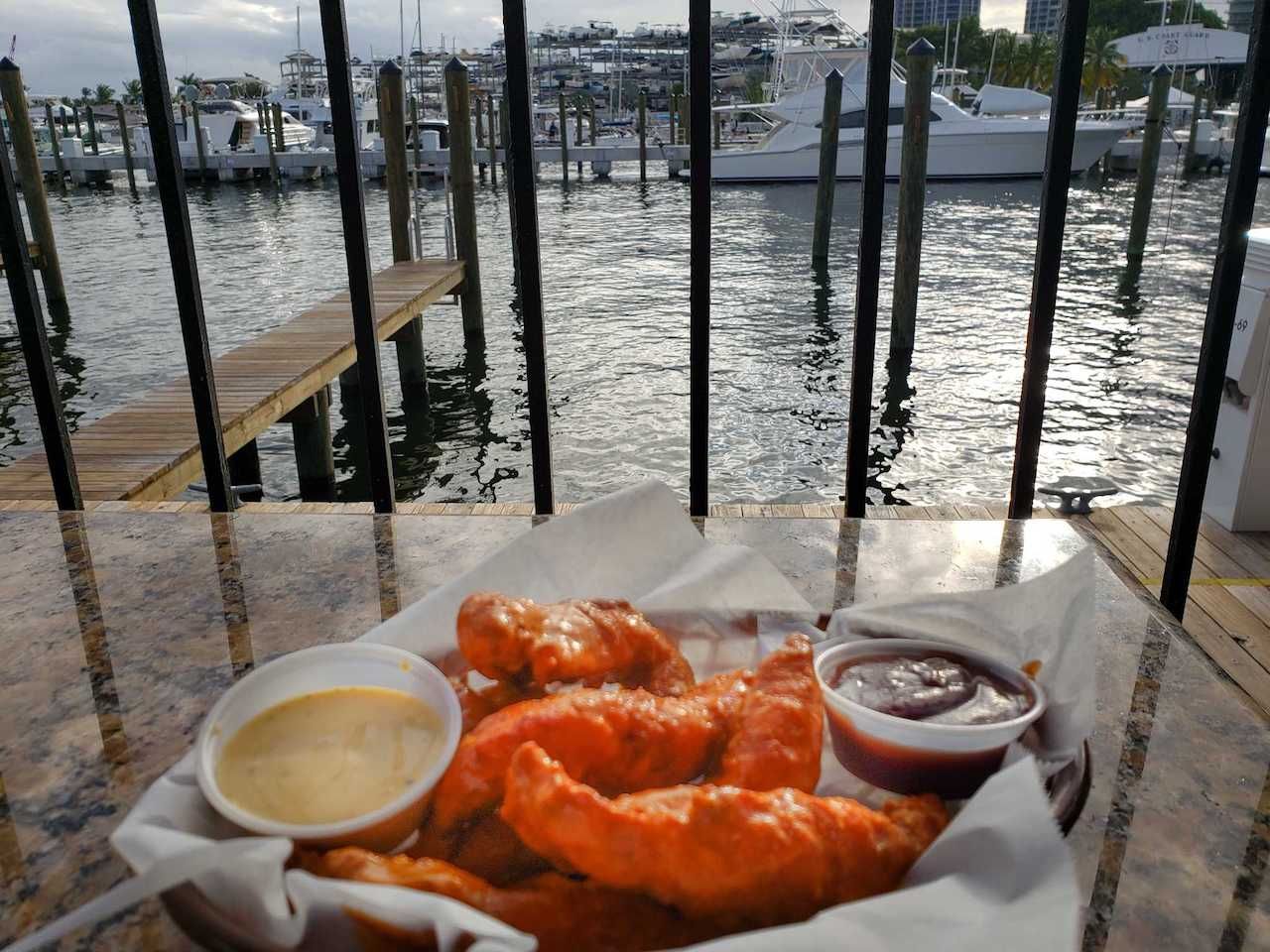 T.I. made boating in Miami famous when he teamed up with Lonely Island to record “I’m on a Boat,” the song that launched a million basic Instagram captions. In Miami, you can pull your boat right up to dozens of bars that, among other things, serve hot baskets of golden chicken strips. Chief among them is Monty’s Raw Bar, which is set right on a marina in Coconut Grove. During the week it’s a happy hour hotspot, and on the weekends you can arrive on a boat, order some strips, and either take them with you back on the water or mingle with the crowd.

It feels like Brickell, Miami’s financial district, has the highest concentration of single people of any neighborhood in America. It’s also home to throngs of alumni from both the University of Florida and Florida State, all of whom treat regular season football games like their own personal Super Bowl. This meeting of young, single people and off-site tailgating comes to a head at Batch Gastropub, where weekend football games feel like a trip back to campus, and the boneless wings fuel parties that last well after the game is over. Can you find hot college bars full of passionate fans in a lot of cities? Probably. But few will have a crowd that looks as good as it does in Miami.

Stop 7: Strips and sunset at the swanky rooftop bar

The best sunset in Miami can be found at Sugar, an Asian-inspired garden set atop the 40th floor of the East Hotel in Brickell. From here, you can see all the way from the Everglades to South Beach, and if you get there just before dusk you’ll witness the city transform from a turquoise paradise to a neon wonderland. Though Sugar’s cocktails make a case for best in the city, the real star of the menu is the Korean boneless wings, served atop beds of lettuce with a tangy yogurt sauce. Enjoy them while the purple sky envelops the city, and the still water of Biscayne Bay reflects the lights flashing on at sunset.

Stop 8: Strips that taste like your grill-obsessed buddy made them 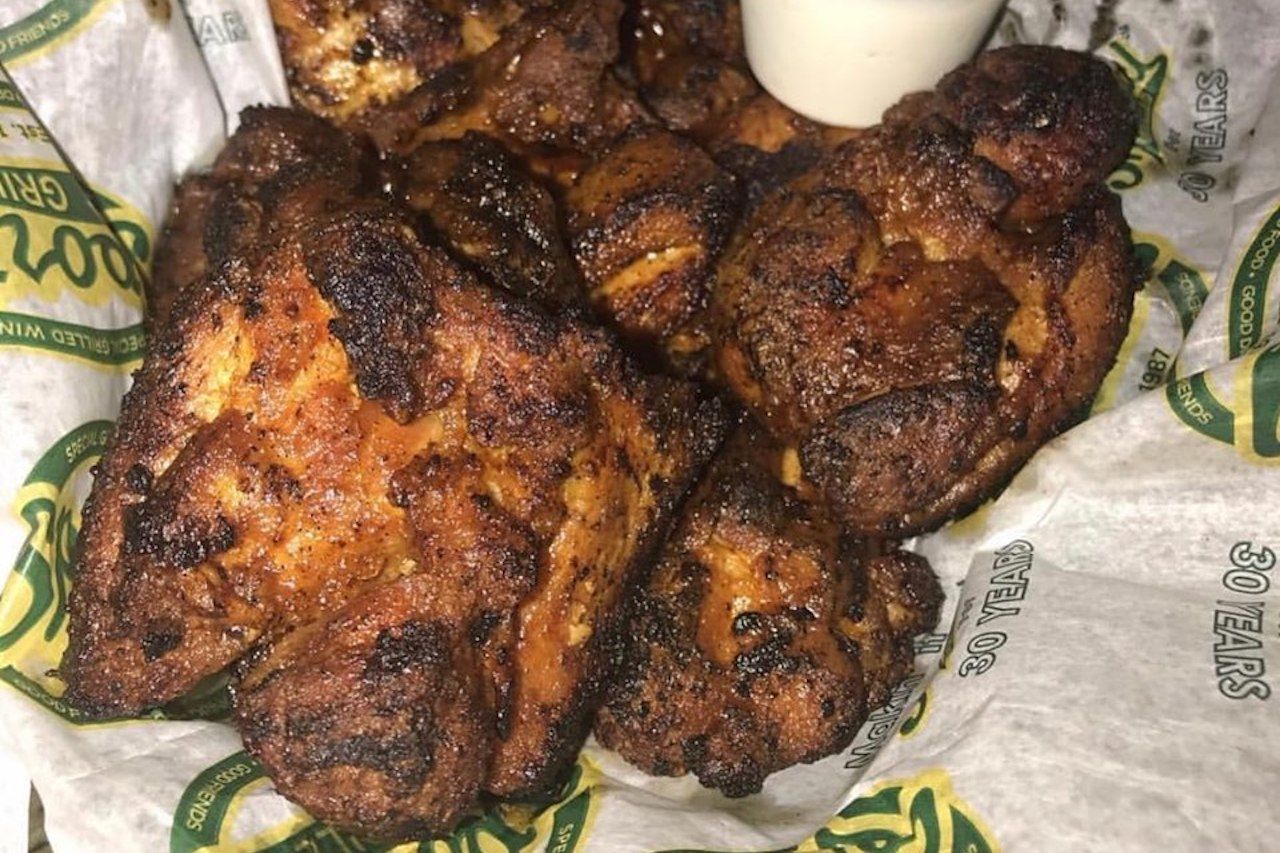 Ask any Miamian, and they’ll tell you the best wings — or in this case strips — in town come from Sports Grill, a very un-glamorous sports bar where a full order costs you $5.99, and you’ll probably have a kid’s birthday party at the next table. None of its suburban locations offer the glamor of a South Beach pool party, but Sports Grill makes a strip the likes of which you’ve probably never tried: fried then grilled, and covered in a spicy sauce called “Dale.” This is pronounced like Mr. Gribble on King of the Hill, and not “Dah-lay” like you hear Pitbull scream 14 times a song. In Miami, you have to differentiate. 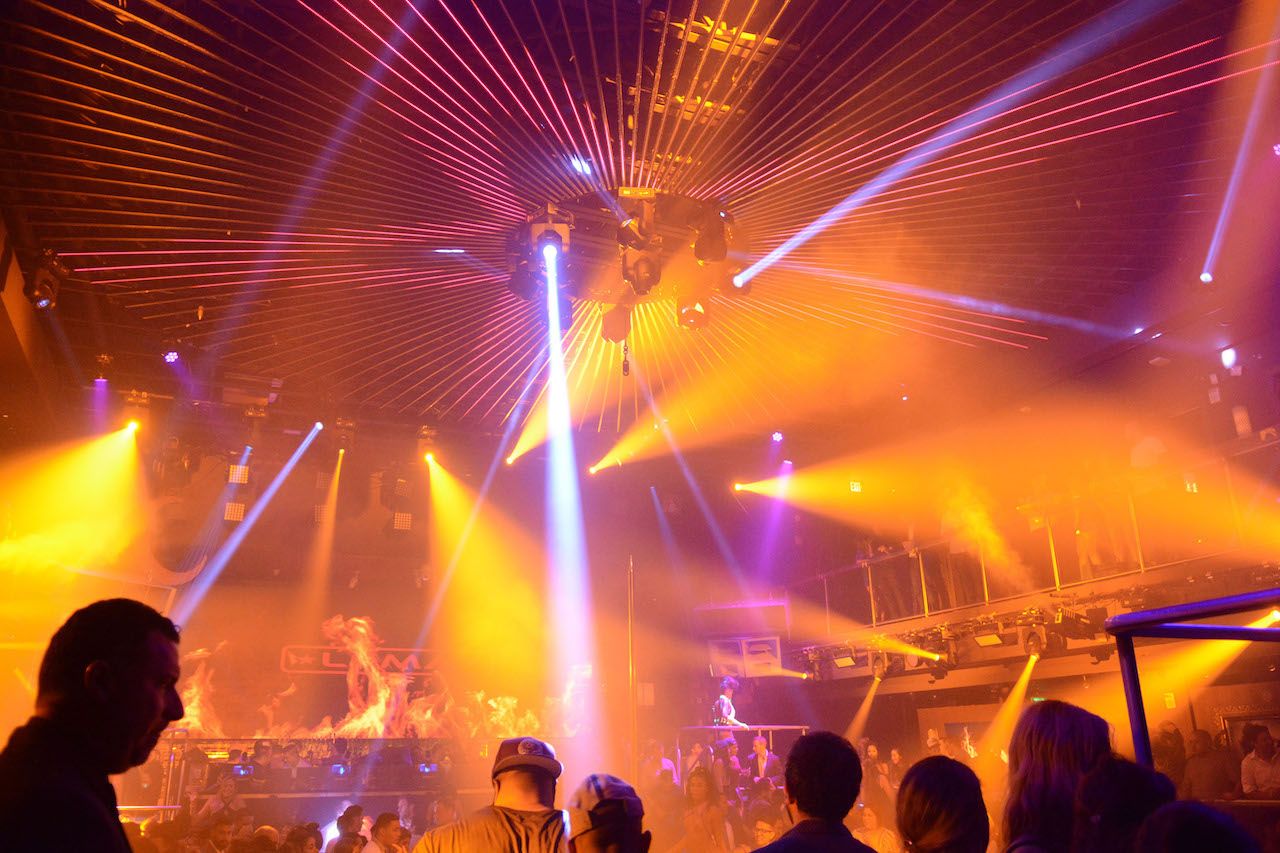 Where better to finish a day of eating chicken in Miami than in a big, thumping nightclub? There is, quite simply, no club in the world quite like E11even, where topless dancing girls on elevated stages greet you when walking through the door, and A-list rappers are both loyal customers and frequent performers. The crowd and music feel like any megaclub in Miami, or Vegas, or Ibiza. The only difference is the place never closes, and you can get private dances with the dancers if you’ve got enough cash. Oh, and you can also order chicken strips anywhere.

E11even’s rooftop restaurant isn’t a bad option for your late-night chicken strip consumption. But for the full experience, get an order of these panko-breaded beauties delivered to your VIP table. Or enjoy them on the rail as you make it rain with greasy dollar bills. You can even enjoy them in a private dance booth, as one local female food writer did and recounted to me, “When I was sitting down getting a lap dance with a chicken strip in one hand and a glass of Champagne in the other, I knew I’d made it.”

Restaurants + BarsWhere To Eat in Miami, According To Miami’s Best Chefs
Tagged
Restaurants + Bars Insider Guides Miami, FL, United States
What did you think of this story?
Meh
Good
Awesome