A flying house is not a common sight, especially one that’s gliding over grasslands pulled by 12 galloping oxen. Yet, not a single face in the crowd of denim and cowboy hats suggests that the sight is unexpected. Mysticism and solidarity saturate Chile’s Chiloé Island, and here lies a tradition conjured up from both — a minga.

The very word minga embodies the heart of island life. It means “an exchange of help for benefit,” and can be applied to everything from helping your neighbor plow and plant potatoes, sheer their sheep, or even move their entire house. In Chiloé, sweat for sweat is fair trade on any scale. 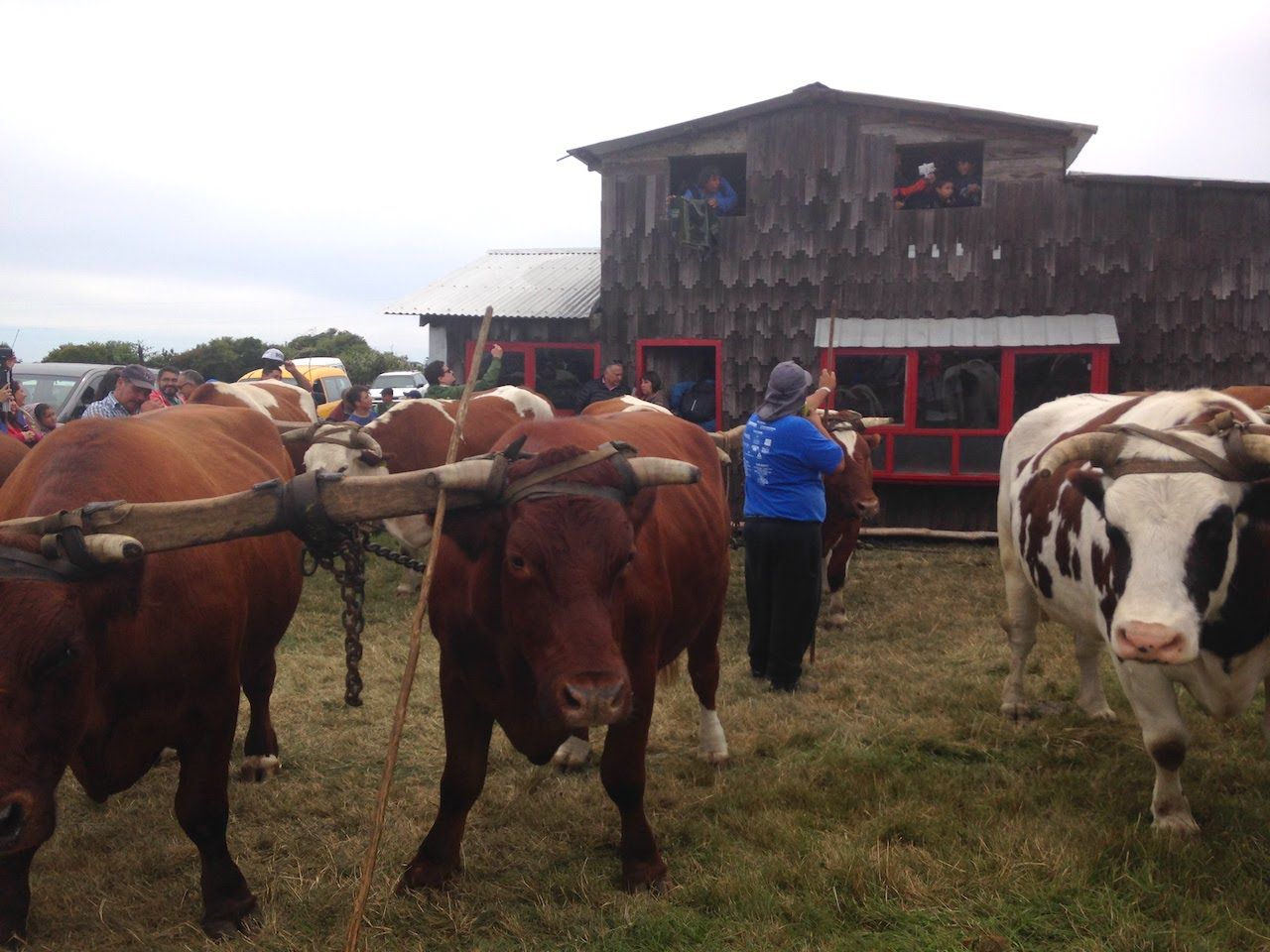 When a Chilote, a resident of Chiloé, needs to move house, they mean it literally. Their entire community comes together to help carry their home to greener pastures. How it’s done has made the minga de tiradura de casas, Minga tug of houses, legendary.

First, workers build a sled underneath the house. Parallel wooden beams run from front to back and act like skis. This part is much easier than it sounds. Many Chilote homes are constructed on stilted foundations to rise above the island’s spongy, wet marshlands.

Next, farmers strut out their burliest oxen. They line the animals up in pairs, place a padded collar over their shoulders, and harness them onto the front. The house transforms into a giant sleigh. Often a farmer will stand in the doorway with a whip, like a coachman on a gigantic horse and carriage. 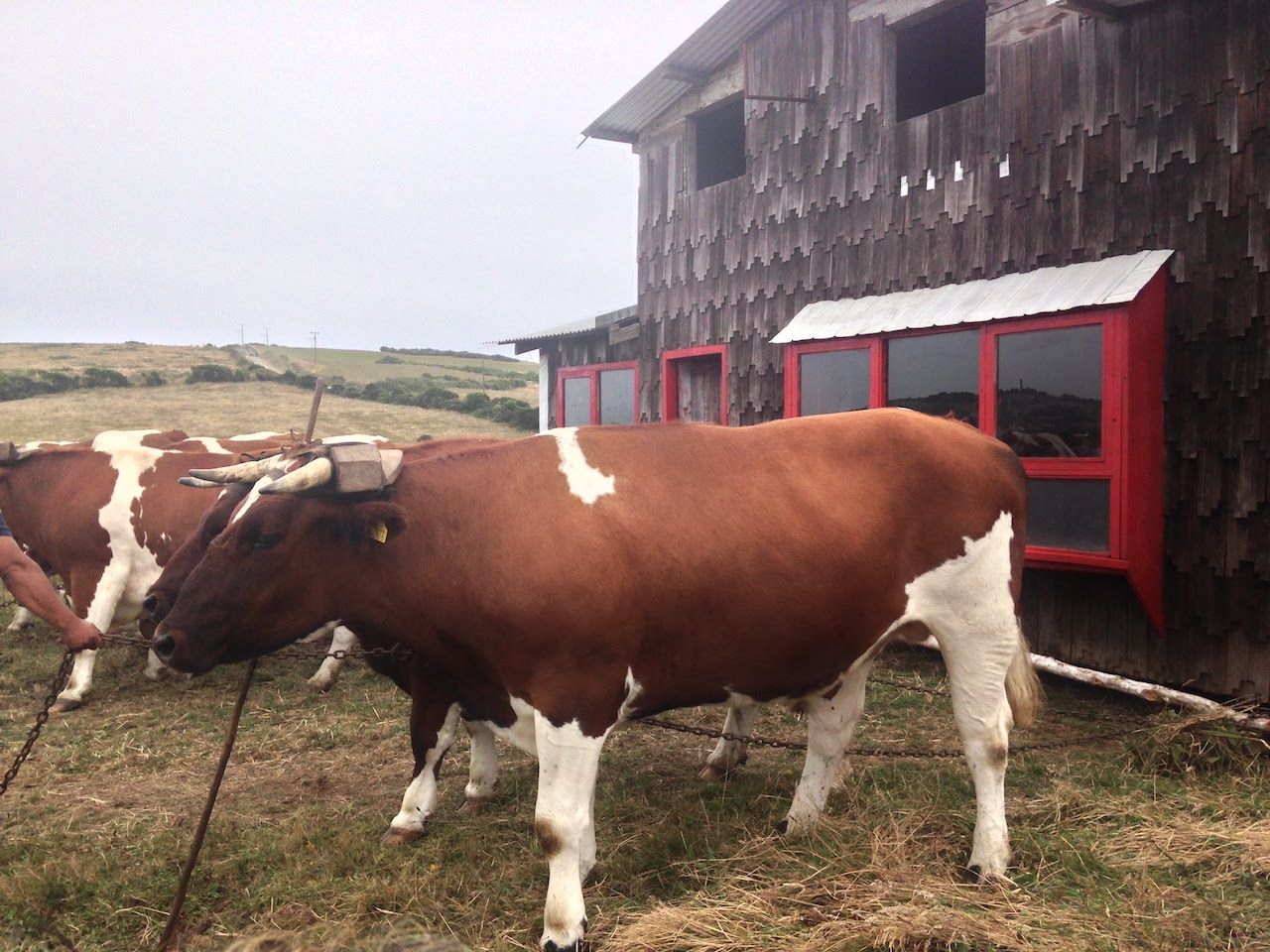 “Adelante!” Forward! With a few whistles and taps, the now mobile home coasts across fields dragged by oxen. A crowd of onlookers runs just to keep pace — or sometimes to jump out of the way.

If needed, the home can be maneuvered onto a raft and towed over the sea. By working together, nothing stops the Chilotes.

While the oxen work, people assemble food shacks at the house’s landing site to feed crowds that can number in the hundreds. Vendors light gas stoves and serve up traditional favorites like empanadas, milcao potato cakes, and cazuela de cordero (a hearty lamb stew).

Mingas are day-long fiestas and important social fixtures. People come together from across the remote countryside to catch up on news and strengthen relationships.

Secluded by the ocean, Chilotes have always depended on soil and sea to sustain them, and each other’s help to survive. The island’s human history dates back nearly 7,000 years, four millennia before Egypt’s first pyramid was built.

No man is an island, especially on this island.

The Huilliche and Mapuche indigenous people who first lived here interacted with the Inca, and the concept of minga may have originated from Inca ideas of communal service for the greater good. The tradition is at least 500 years old.

The Mapuche gave Chiloé its name. It translates to “place of seagulls,” giving a sense that islanders have always felt more anchored to the sea than the mainland. Unpredictable Pacific storms, short growing seasons, and a gloomy climate have long forged solidarity among its isolated inhabitants.

When the Spanish settled here in the late 1500s, they too found themselves marooned. Ships rarely arrived from their large northern colonies as the island offered no riches to make voyages lucrative. The stranded colonists married into local communities and absorbed their traditions, including the minga.

This allowed a unique mythology to brew here with little outside influence for centuries. Mysticism from the Catholic settlers, Jesuit missionaries, and indigenous cultures soaked into the soil of Chiloé.

The sinister cause of a minga

Shrouded in fog amid temperamental seas, the island’s ambiance inspired supernatural beliefs. Amongst Chileans, Chilotes are famous for their collection of ghouls and history of dark magic.

Chiloé’s tourism brochure makes a good read for a dark and stormy night. Caleuche, a ghost ship that blinds seafarers with its light, is still feared by Chilote sailors. A coven of island warlocks were once so influential that they collected a yearly fee from residents lest they face “an accident.”

These dark forces are exactly why Chilotes go to such lengths to move houses. Bad fishing or farming seasons may be attributed to supernatural forces, in particular hauntings or curses.

And, moving into a new house is not an option. A protective, uniting island spirit is said to dwell inside each home. To abandon your house is like discarding your spiritual protection. It attracts mala onda, bad energy.

So, when you need to move, the whole house moves with you. 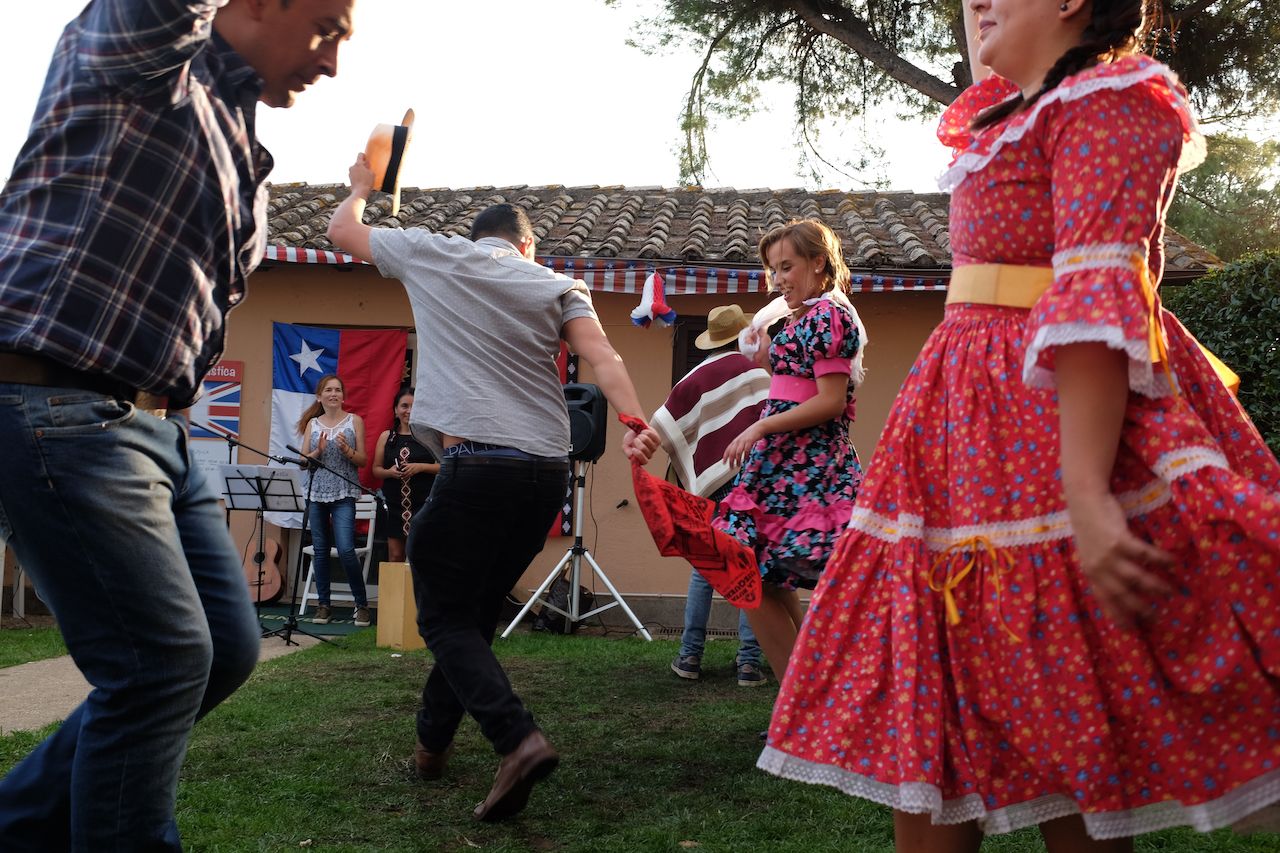 By providing live music and food, homeowners show gratitude to their community for the heavy lifting. That is their side of the agreement — their trade in the minga. It’s also understood that they’ll join the work crew the next time someone needs to haul house.

In excited sprints and cheers, the house makes the journey to its new spot. A minga may take several days from building the house’s sleigh to reaching its goal, with a big party taking place on the last day.

As the home grates to a halt at its final location, a live band breaks out in country music. They play Chile’s national square dance cueca, done Chilote style. Clap clap. Clap clap. Two repeated claps call everyone to the dance floor.

“Whoooo-eeee!” Men and women face off in pairs, and holler at one another while dancing their square sets. Men sweep their cowboy hats at the ground to playfully chase the feet of the women. The ladies scold them by whipping a handkerchief back. This is not formal cueca parlor dancing, it too has adapted to lighthearted and social island life.

How to find this living legend

Mingas are widespread across farming communities on the Chiloé archipelago. However, they are rare, being such rigorous labor, and are becoming less and less common as outside social influences and opportunities draw people away from the countryside.

This lonely island and its culture are no longer as isolated as they once were. It’s now just a 30-minute ferry ride away from Puerto Montt, a major transport hub.

Modern mingas are held to celebrate and pass down the Chilote way of life, to ensure it endures like its islanders always have. During Chile’s summer holiday season, from December to March, several are organized to promote and protect the culture.

TravelWhy Chile Is the Perfect Gateway Trip To South America
Tagged
Culture Chile
What did you think of this story?
Meh
Good
Awesome