Chile is at the southern end of South America, so while northern hemisphere days are getting shorter and colder, Chilean summer is around the corner. By December, school’s out for the year, and the beaches are in full summer swing.

Chile’s 2,600-mile shoreline is the longest Pacific stretch in South America. With so much coastline, the variety of beaches is endless. Add in incredible seafood, hopping surf towns, and sleepy fishing villages, and Chile’s beaches are the perfect escape from the winter. Here are all the reasons you need to be at a Chilean beach this winter. 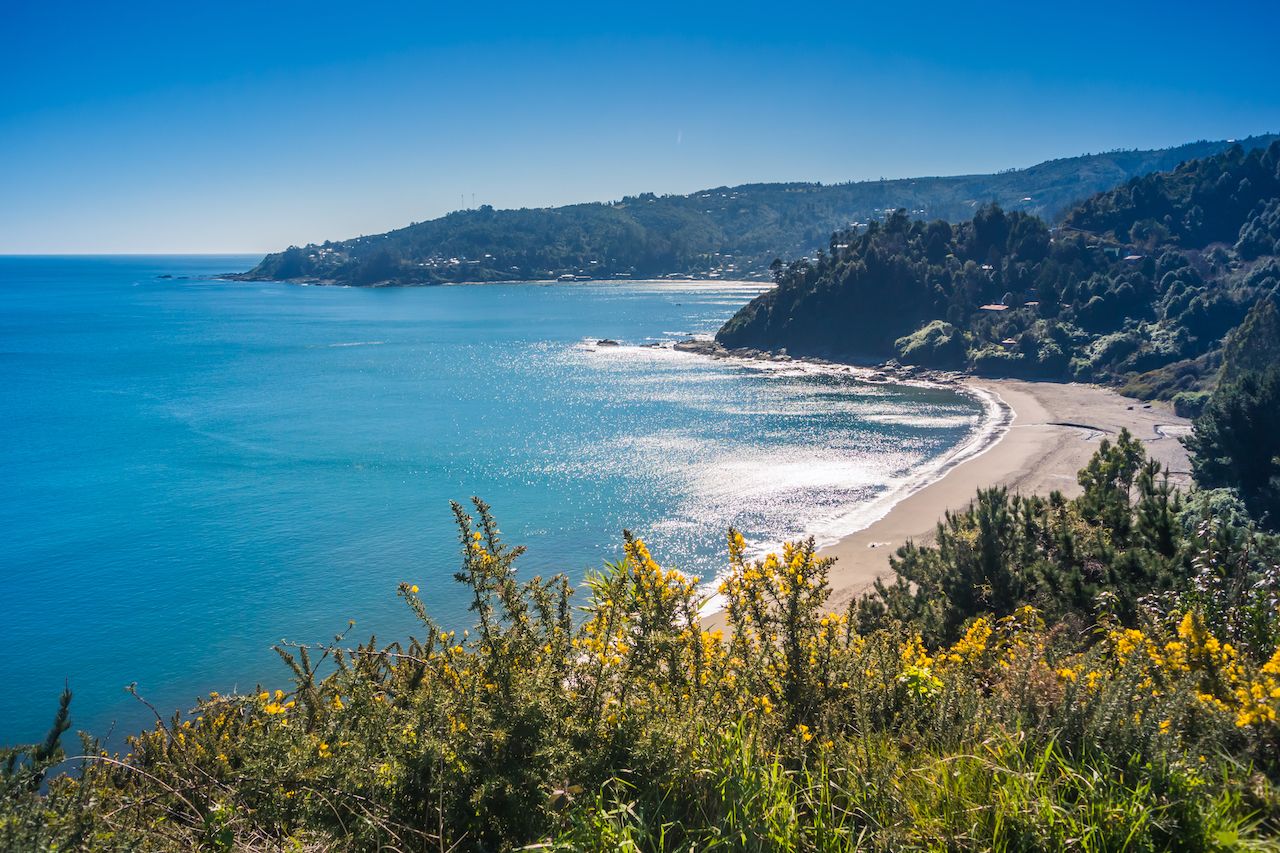 During summer, Chile doesn’t just have warm weather. It also has one clear day after another, since it hardly rains — all but ensuring a dry, sunny vacation. Now the big disclaimer: The main reason Chile gets little rain is that the ocean water is cold. When water is too cold to create water vapor, rain clouds don’t form. The Humboldt current that runs north all the way up Chile’s coast from Antarctica keeps the ocean nice and chilly.

So if you’re expecting to soak in warm seas, pisco sour in hand, think again. If you plan on an activity like surfing, a wetsuit is a must. But, to keep things in perspective, Chile’s summer water temperatures are higher than those in Northern California — especially as you head farther north. Plus, at a few beaches along the coast, natural outcroppings and bays keep the sea calm and warm.

Some beaches have turquoise blue water. 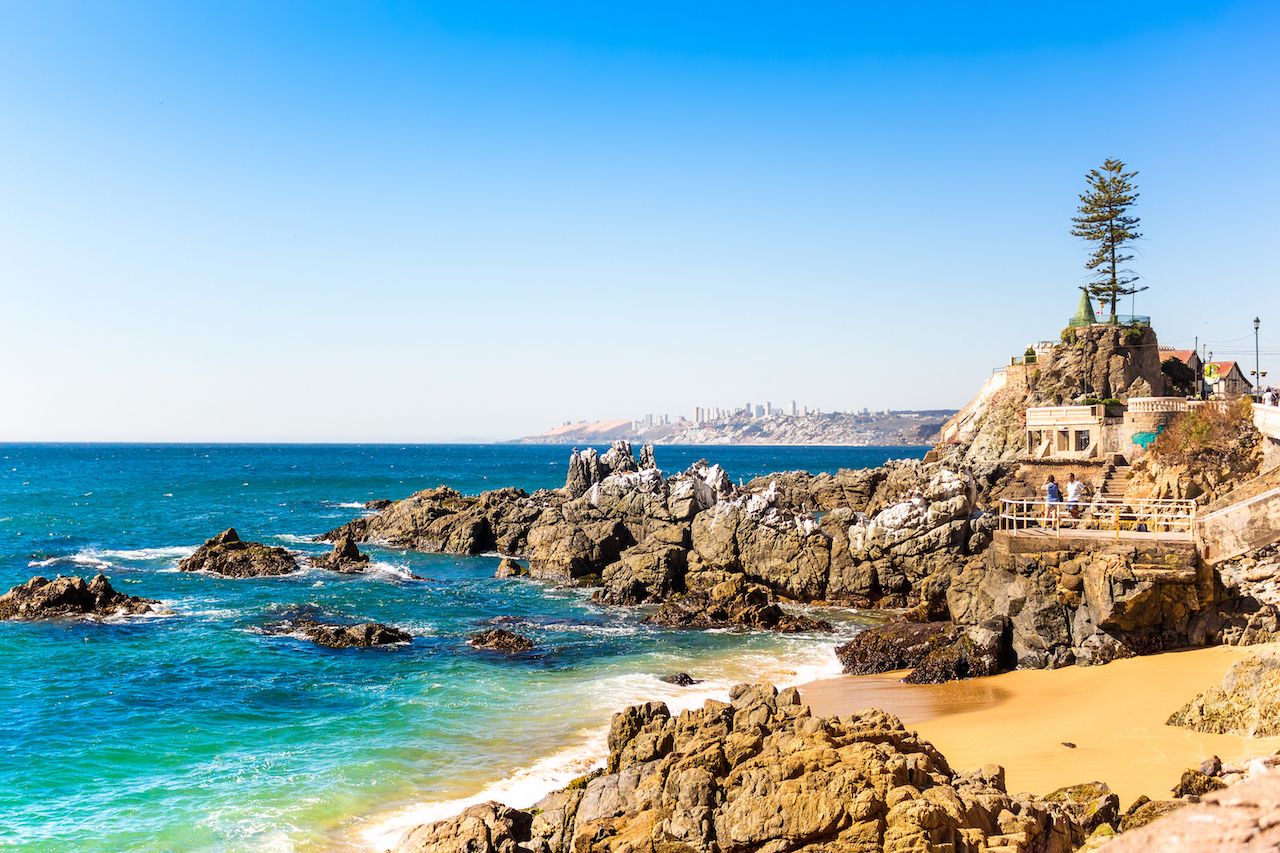 In Chile’s northern beaches, the water looks so tempting you might be fooled into thinking you’re in the Caribbean — until you jump in. In the far north, though, the water will be more refreshing than bracing, and the color will definitely be beautiful. At Bahía Inglesa in the ultra-dry Atacama region, the ocean’s turquoise hue looks bright against the pale sand. The bay is protected from southern swells, so the water is tranquil and balmier than just a few miles away. The small restaurants lining the beach are a good place for a lunch of local seafood, especially the oysters for which the area is known.

South of Bahía Inglesa, La Virgen Beach is only accessible by car via miles of dirt road. Driving in, you’ll be impressed by the sight ahead — intense blue, light sand, and thatched beach umbrellas — even before you reach the beach. If you stay at one of the cabins or the campground, the dry desert air and absence of light pollution will reveal a nighttime sky absolutely packed with stars.

It has beautiful beaches for long walks. 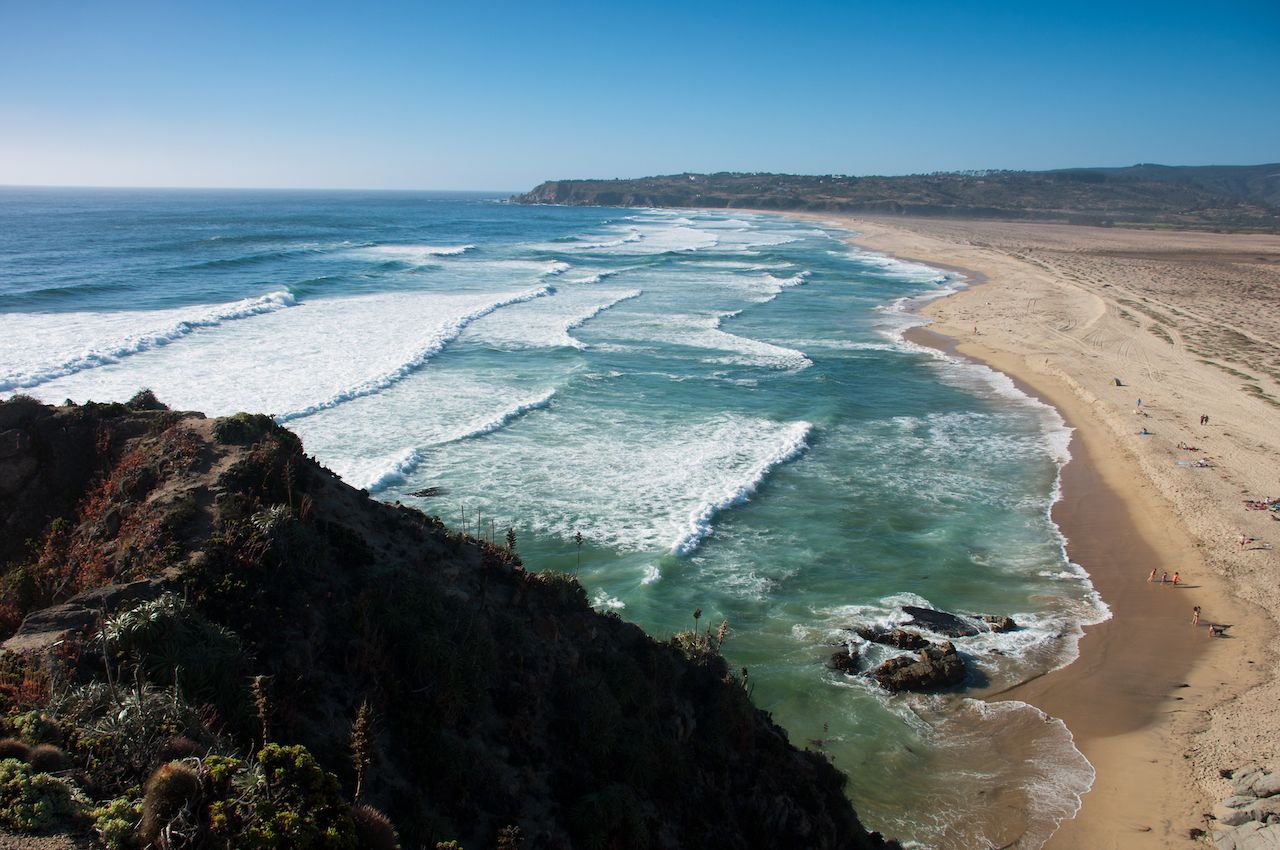 Chile has beaches tailormade for long walks and gazing at the sunset. A two-hour drive northwest of Santiago, Zapallar is one of the most beautiful beaches in the country. Elegant summer houses tucked into the forested hillside overlook a protected cove. From there, a paved path along the coast leads over massive rocks and above crashing waves. Eventually you’ll arrive at Cachagua Beach, the perfect place to continue your walk. If navigating rocks and crossing over pounding swells is too scary, you could just take a long walk on Cachagua beach itself, a flat and lovely three-mile-long stretch of sand.

There are beaches for adventurers and surfers. 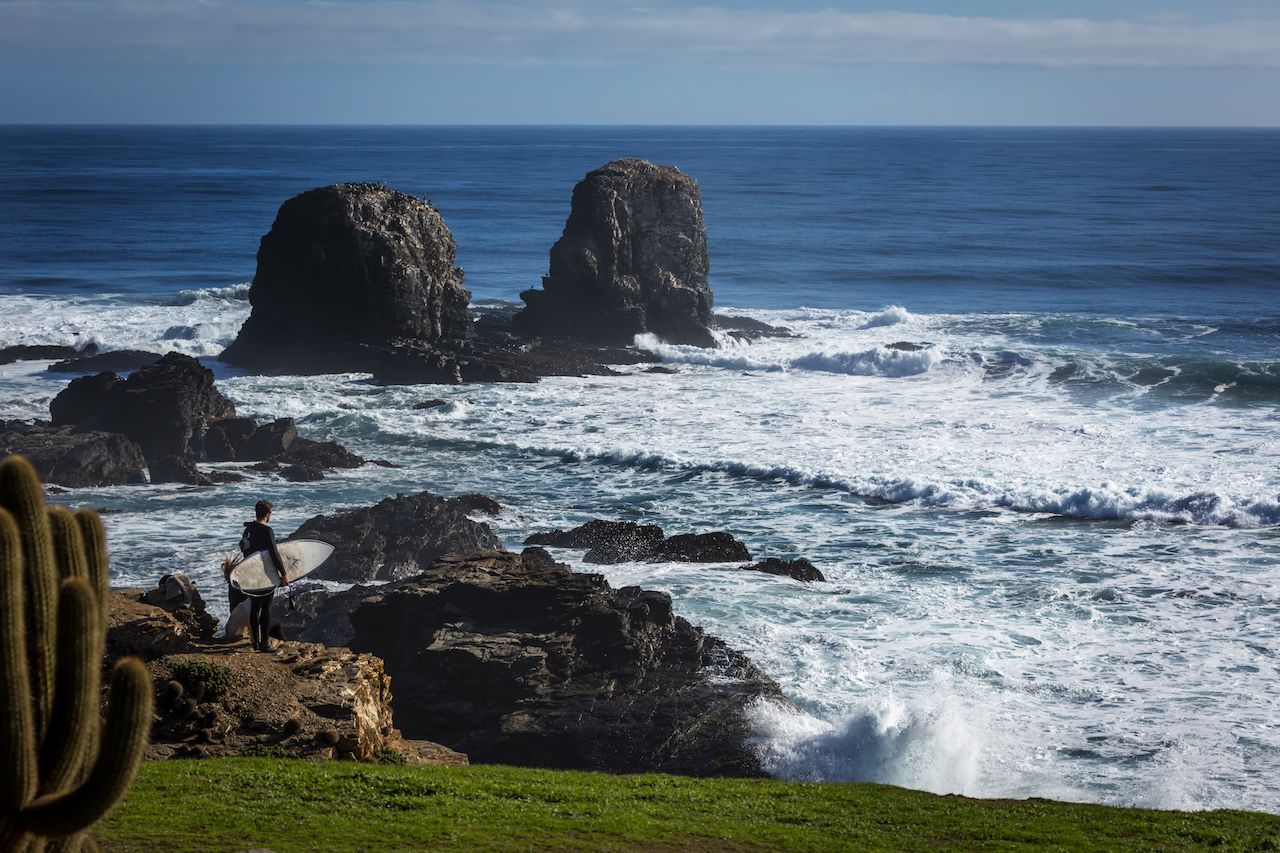 Surfers and kitesurfers can find waves — or wind, if that’s what they’re looking for — up and down the Chilean coast. Even Cachagua has plenty of surf breaks, including an excellent one at the north end of the beach. However, Pichilemu in the Navidad area southwest of Santiago is Chile’s surf capital. Nearby Matanzas beach also has waves, plus a laid-back feel and accommodations of every type. In Matanzas, you’ll also spot sea lions, seabirds, and mollusks that may end up in your ceviche or empanada in the evening.

In the same Navidad area, you can access Puertecillo beach in a four-wheel-drive car by way of a private road through the Topocalma farm. Besides surfing and boogie-boarding, Puertecillo has unusual rock formations, caverns like Cueva del Chivato, and wind-sculpted sand dunes. At the south end of Puertecillo, you’ll find a campground and a surf school. A little ways beyond Puertecillo is Buchupureo, a rural coastal town in the Bío Bío region. If you aren’t a surfer, you could always go horseback riding on the seashore at sunset there.

It has beaches with a chill, hippie vibe. 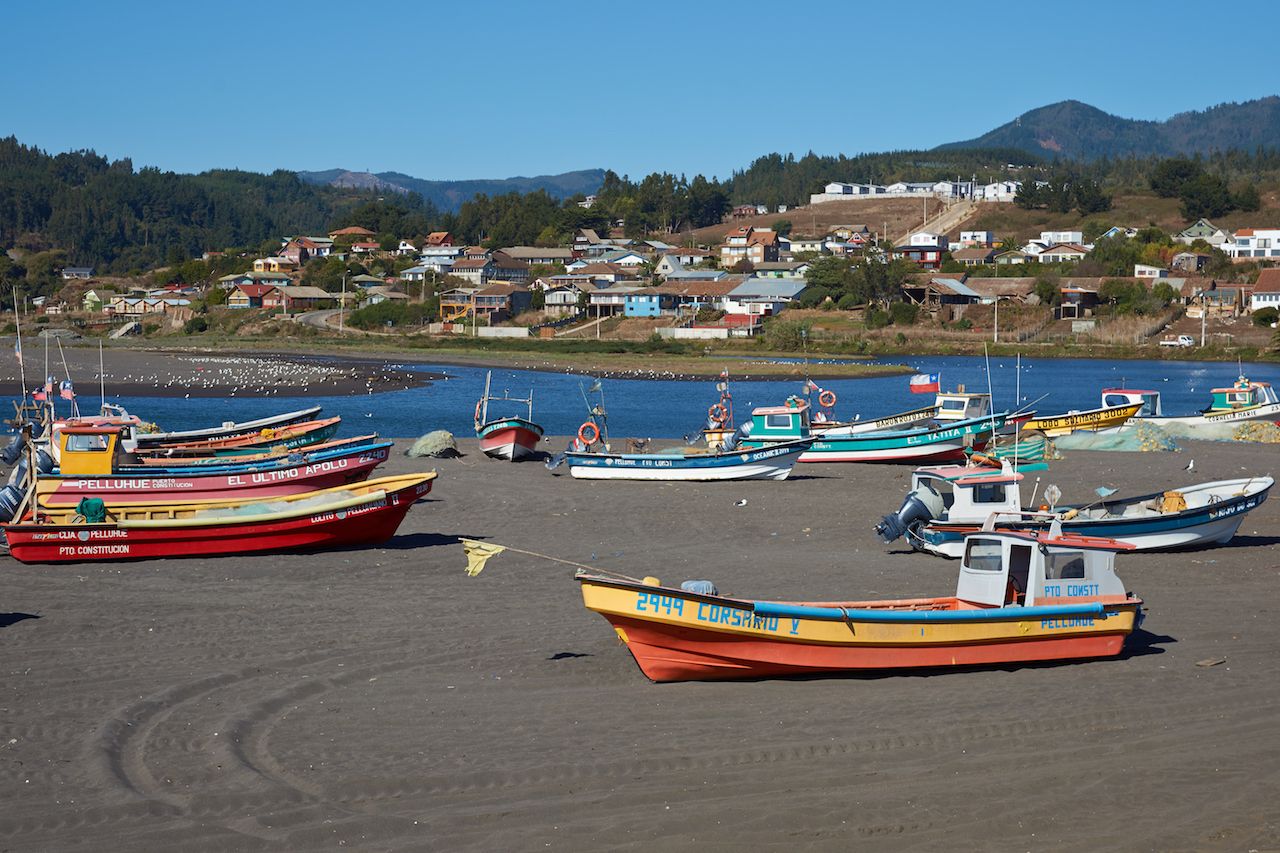 If you want to pitch a tent and pass the night watching the stars with a guitar, connected to Mother Earth, you’re in the right place. The hippie Hornitos area up north gets its name from the fact that the sand is crazy hot in summer — since hornitos means “little ovens.” At the Los Hornos and Punta Hornos beaches, the desert meets the sea while colored houses dot the dust-colored shore.

Hornitos lies above a bump in the coastline that protects it from southern swells. You’ll get calm waves and water that’s actually warm enough for a nighttime dip. This part of Chile is remote, though. Even the summer homes don’t have electricity or running water. If you decide to go, bring everything you need.

In the opposite direction, well south of Santiago where the water is definitely brisk, you’ll find the fishing village of Curanipe. This area has managed to escape the radar of most tourists, but it’s well known among surfers who use it as a base to explore Buchupureo and other nearby breaks. Despite being nearly 10,000 miles from Indonesia, Curanipe was hit hard by the 2010 tsunami, and a memorial at the pier stands in memory of those who lost their lives.

On a summer day in this unassuming fishing village, you can listen to live music, sip a Pisco sour outside, and check out wheelbarrows full of live crabs. The best beaches here are the Bohemian black-sand beaches of La Sirena and Curanipe, which have places to camp nearby.

Chile even has Polynesian-like beaches. 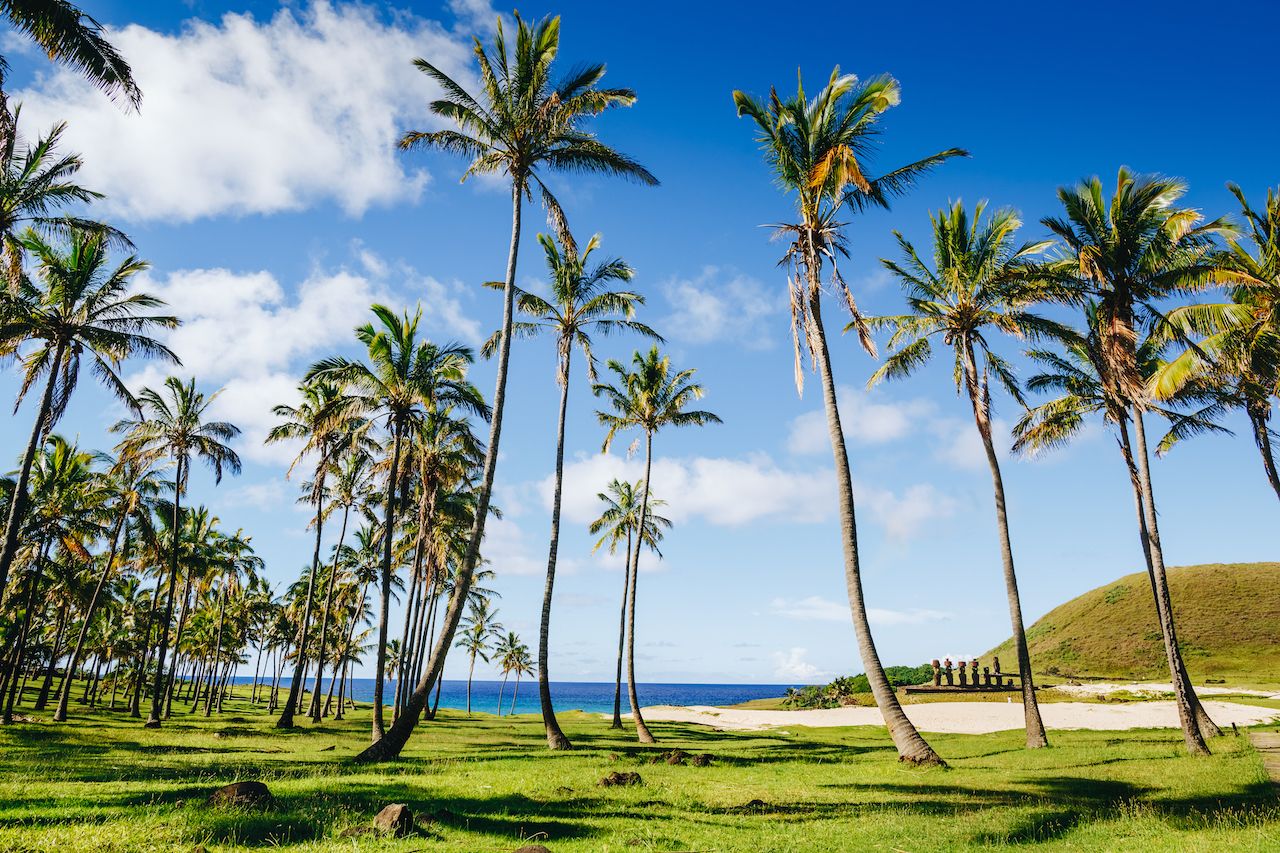 Although it’s one of the most isolated places on earth, Easter Island is part of Chile, and you can get there on a daily non-stop flight from Santiago — although the trip is over five hours and will cost you at least $600 round-trip. Easter Island, also known as Rapa Nui, only has two sandy beaches. Anakena Beach is flanked by palm trees and the Moai statues of the Ahu Nau Nau, with white sand and warm, crystal-clear water. You won’t find many places to buy something to eat, so take a snack, but don’t forget to leave this island beach as pristine as you found it.

You can even find a nudist beach. 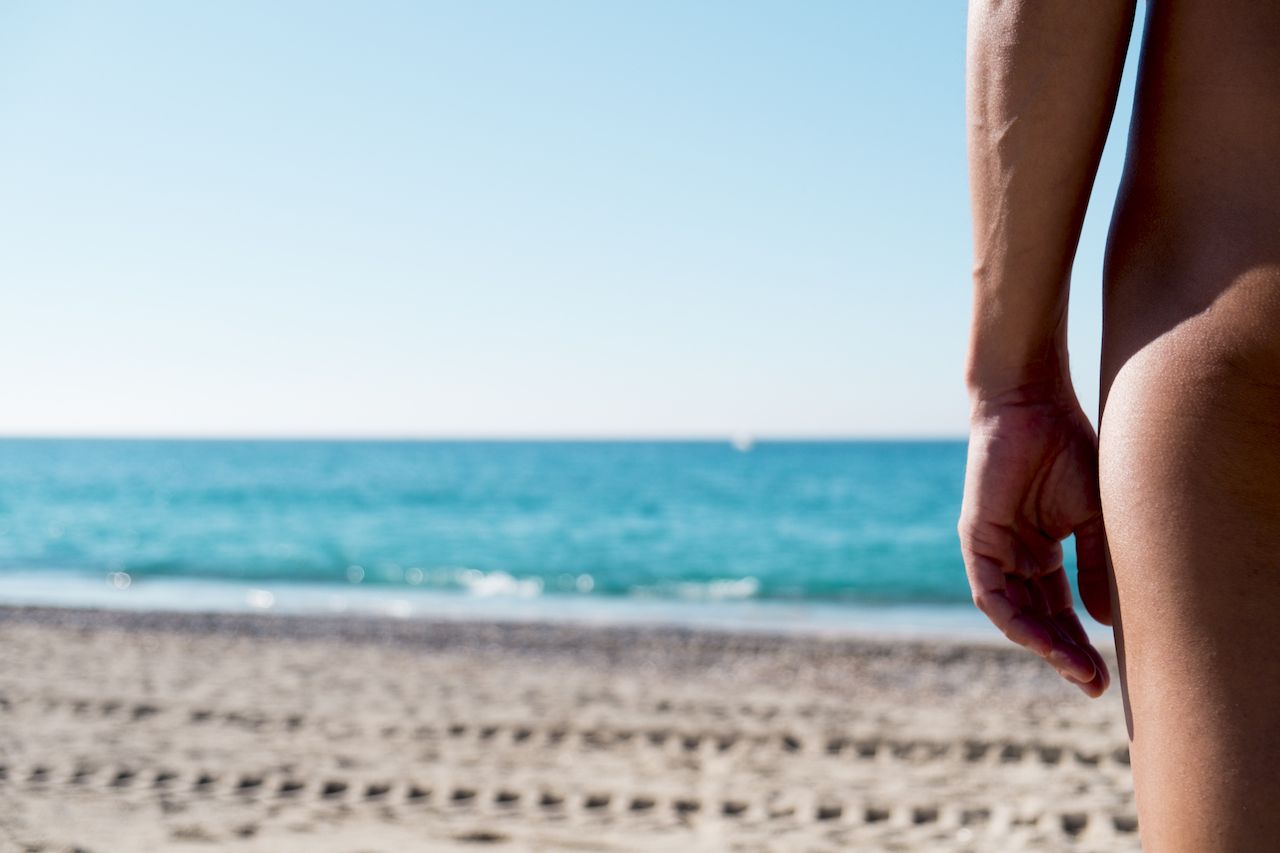 There’s only one nudist beach on Chile’s very long coastline, but if stripping down is important to you, you can do it here. Luna Beach is sandwiched between more popular beaches, like Playa Larga del Horcón, protected by the coastal cliffs of Puchuncaví. This beach, less than a third of a mile long, is part of an environmental reserve — so in addition to enjoying naturalism, you can enjoy nature in its purest form. Getting there requires a hike through a local farm. For directions on how to reach it, contact Turismo Playa Luna. 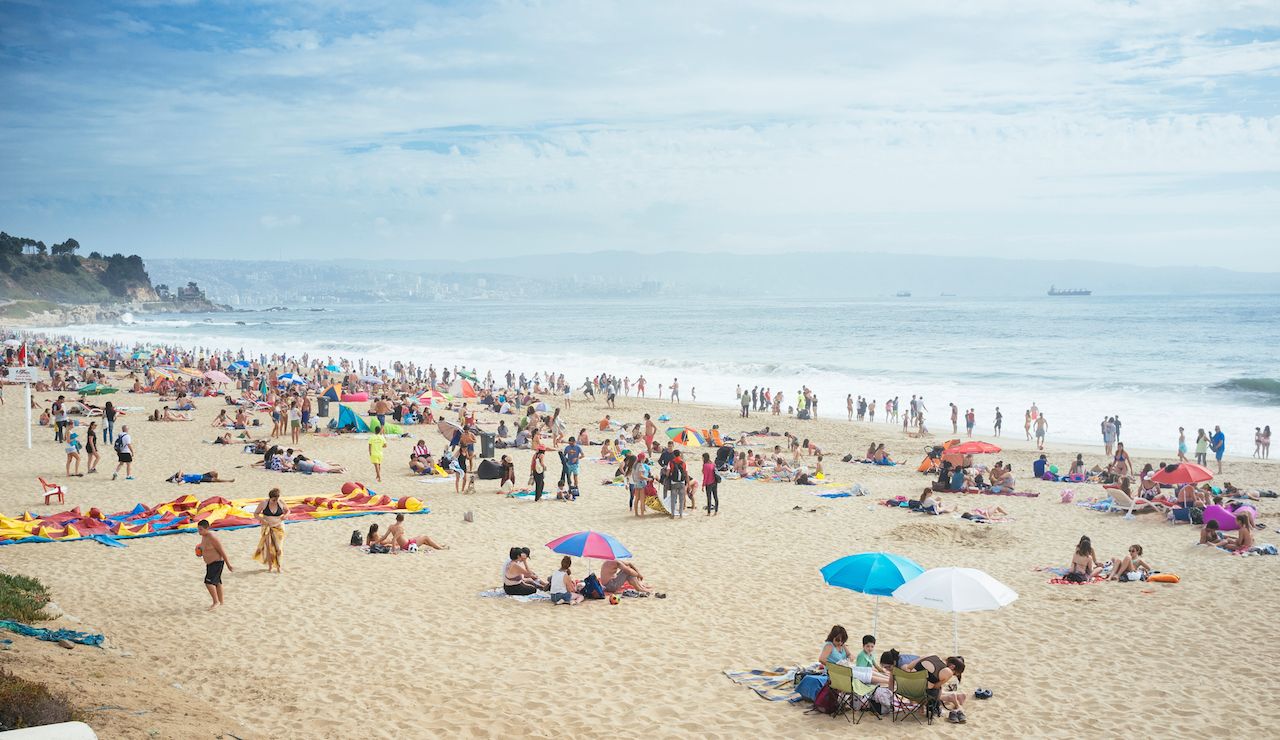 It’s not all kumbaya on Chile’s beaches. Some are loud, packed, and best enjoyed with an icy beer in hand. Reñaca beach on the central coast of Chile is just 20 minutes from Viña del Mar (the closest beach to Santiago) and is Chile’s version of spring break — except it lasts a full three months from December to February. In the afternoon, the music starts thumping, and the beach fills up with teams sponsored by different beer brands participating in silly contests, cheered on by Chileans in matching bikinis just barely big enough to feature each beer company’s logo. After sunset, the party continues until dawn at the nearby bars.

The party scene at the Mantagua and Maitencillo beaches just north of here is more refined. Locals with beach houses take in the sunsets, Pisco sours in hand, from terraces overlooking beaches or host pool parties at home. You can also hit up the area’s many dance clubs, which hold huge electronic parties during the hottest months.

You’ll have the beaches to yourself. 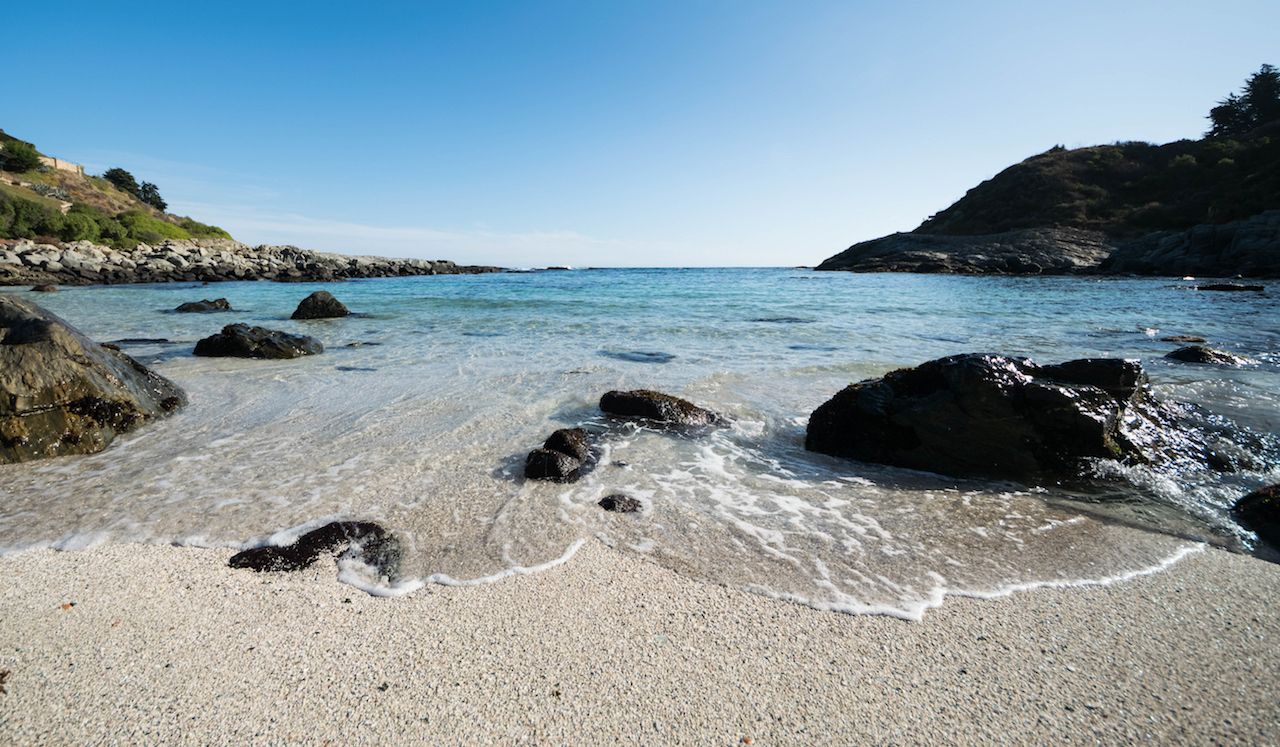 Up and down the Chilean coast, you can find uncrowded beaches that each have their own appeal. Just north of Cachagua beach, Las Cujas is a tiny cove with clear green water, rocks, fine gold sand, and placid seas. Snorkelers will see starfish, crabs, and crayfish among the rocks.

Due south of Las Cujas, Cau Cau Beach is surrounded by cliffs, accessible only via a wooden staircase through a forest. The trek pays for itself when you reach the small oasis of deep blue, serene water. After CauCau, head to nearby Horcon beach to tie a colored ribbon on the colorful bridge of wishes and make a wish.

In the Bío Bío region well south of Santiago, a one-hour walking path through forests of cypress, pine, and eucalyptus eventually gets you to Ramuntcho Beach. Ramuntcho has soft, ivory sand that contrasts with the deep emerald of the ocean. Trees line the horseshoe-shaped cove, providing shade and a perfect place to relax.