Christmas comes with a few guarantees in the United States. Lights go up the minute Halloween decorations come down. Reindeer take up their posts on front lawns, and mall Santas man their stations in shopping centers, where Christmas albums play on repeat all month long. When it comes to the big dinner, however, Americans never did settle on a menu; the quintessential Christmas dinner can vary pretty dramatically between American families. This year, take advantage of that culinary identity crisis with some inspiration from these traditional Christmas dinners around the world. 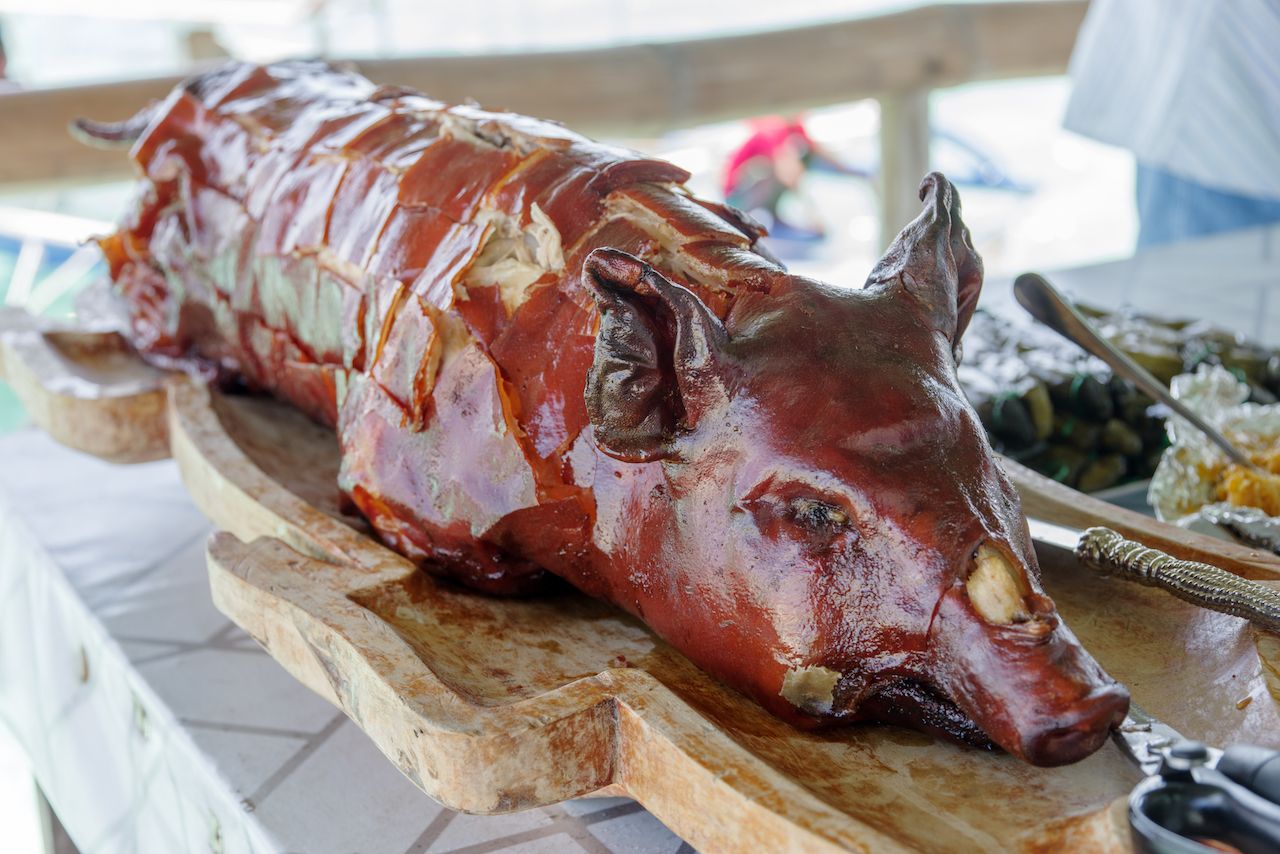 Christmas is serious business in the Philippines, the majority of which is Christian. The countdown to December 25 begins in September, the first of the “ber” months that mark the start of the holiday season, which finally wraps up each January.

Noche Buena is the main holiday meal, traditionally held after midnight mass as Christmas Eve slips into Christmas Day. Pork is bound to feature, either in the form of lechón (roast suckling pig) or Christmas ham. Accompanying dishes may include Pinoy-style spaghetti, a take on Bolognese with a banana-ketchup-sweetened sauce and hot dog pieces, or keso de bola, a ball of edam cheese. Though cheese is scant in Filippino cuisine, the red-wax-wrapped Dutch dairy product is ubiquitous on Christmas and eaten with pandesal bread.

Puto bumbong (black glutinous rice with coconut sugar) makes a perfect dessert for those with a mild sweet tooth. For a proper sugar rush, there’s leche flan or fruit salad, which is no ordinary bowl of berries in the Philippines. It’s a sweet, soupy dessert made with fruit cocktail and a condensed-milk-based sauce. Buko salad is another take that uses shredded young coconut. 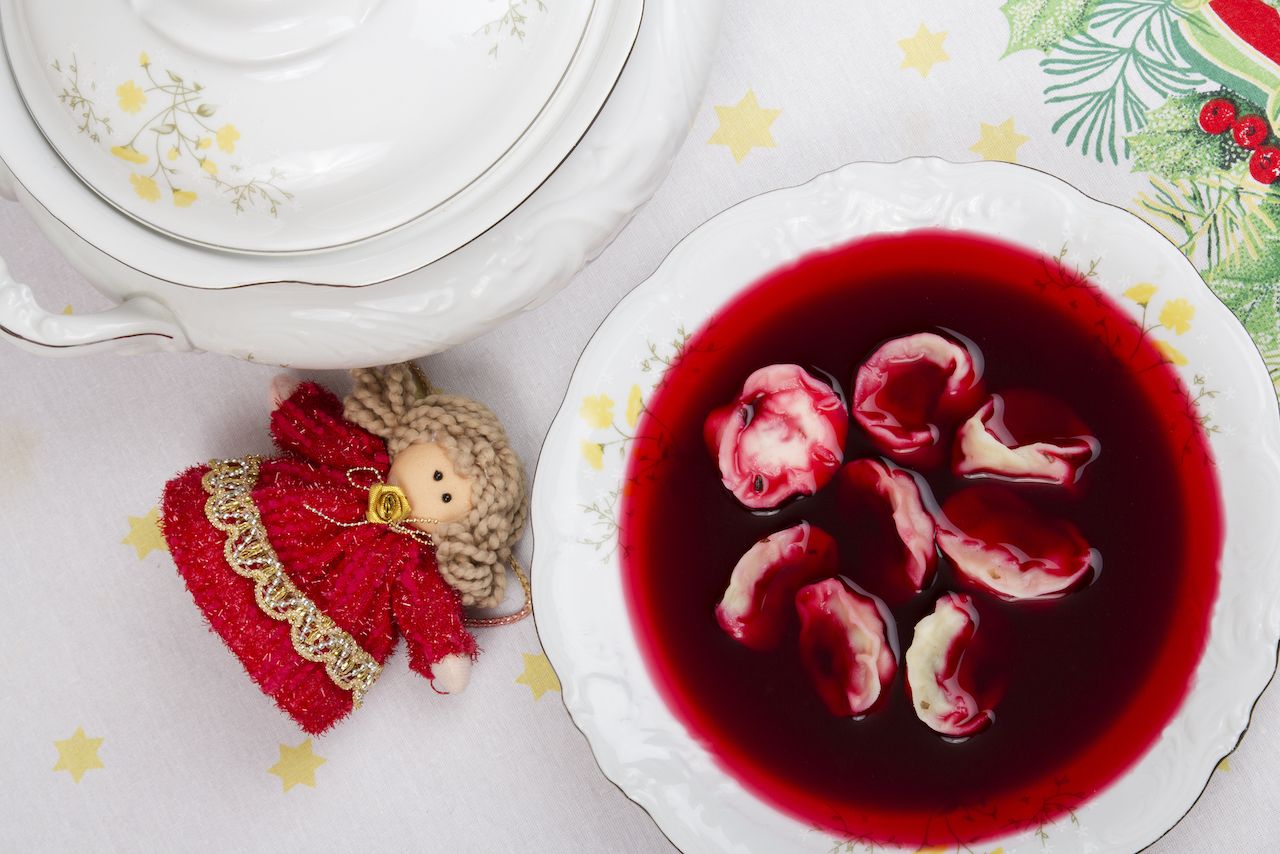 In Poland, a traditional Christmas Eve dinner is an hours-long affair called Wigilia. The meal is meant to begin when the first star, the Star of Bethlehem, appears in the sky, and it kicks off with everyone in the family breaking off a piece of the opłatek, or Christmas wafer.

Though early Wigilia celebrations featured an odd number of dishes, today’s dinners traditionally incorporate 12 dishes, one for each of the apostles and months of the year. Borscht (beetroot soup) is a holiday staple and may appear alongside other soups, like fish head, rye, or mushroom. Red meat is rarely served, but fish like carp, herring, and tench are inevitable. As are pierogies in true Polish fashion. Once everyone’s done feasting, it’s customary to exchange gifts under the tree on Christmas Eve, and some families end the night with midnight mass. 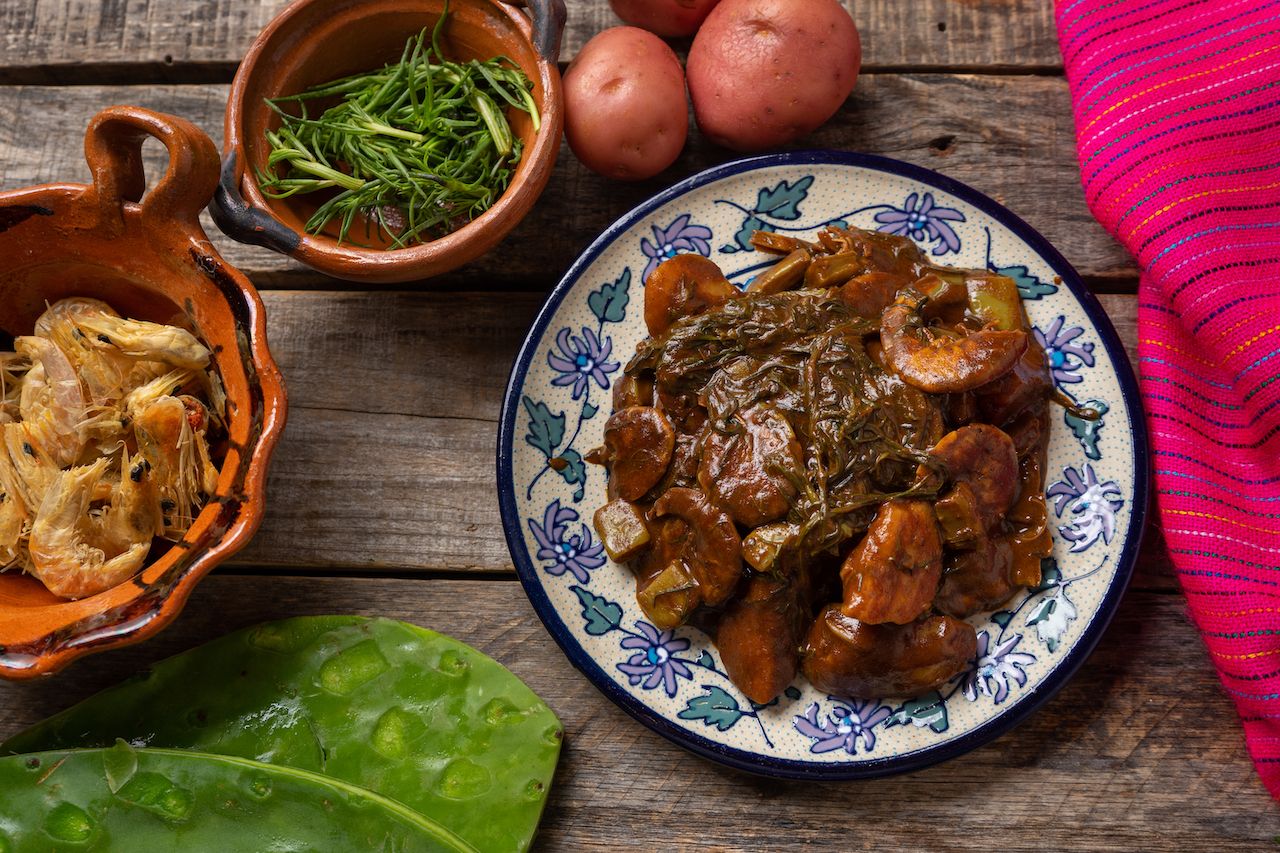 The lead-in to Christmas is just as special as the day itself in Mexico. Festivities begin on December 16 with Las Posadas, a nine-day celebration commemorating Mary and Joseph’s search for shelter on their travels to Bethlehem (posada means “inn”). The festivities typically involve Mexican Christmas carols, piñatas, candlelight processions, and lots of good eats, including tamales, pozole (hominy stew), and ponche Navideño (a type of mulled wine).

Like in the Philippines and many Latin-American countries, Christmas Eve’s Noche Buena is the biggest feast of the Mexican holiday season, which officially ends on King’s Day on January 6. Roast turkey often sits at the center of the table, sometimes slathered in mole, a rich, dark, chili-based sauce. Roast pork may take its place as the main protein. 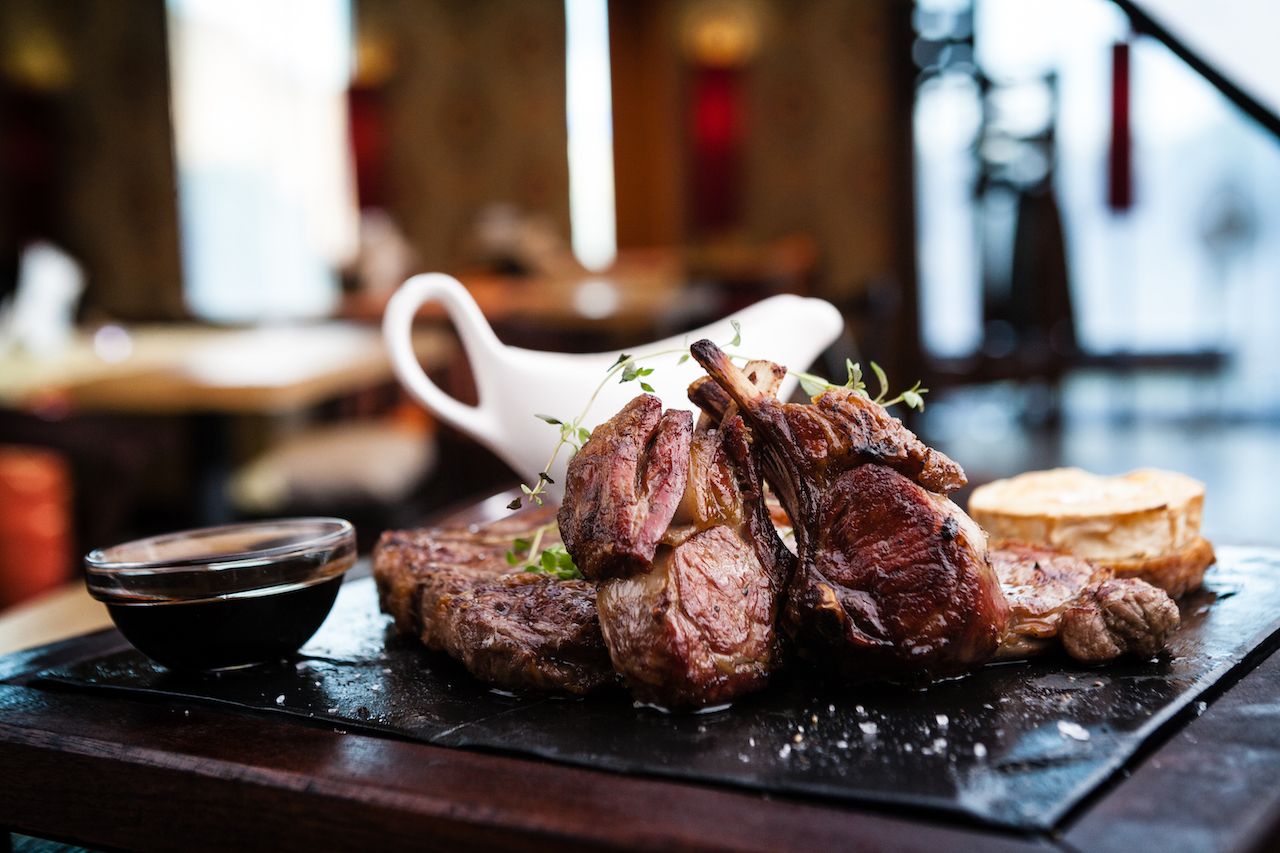 Roast dinners used to be standard Christmas fare in Australia, but in recent years, barbecues have won out in popularity. After all, Christmas is a summer holiday Down Under. Whether families throw more meat or seafood on the barbie varies by region, but lamb, sausages, ham, prawns, and barramundi are all classic options. Really, anything goes as long as there’s enough beer to go around. Sides generally include cold cuts, oysters, and salads that reflect the season’s freshest fruits and veggies (cherries are particularly popular around Christmas).

Though traditionalists may serve plum pudding for dessert, pavlova has become the sweet face of Aussie Christmas. The meringue-based dessert is light and delicate, crisp on the outside yet slightly chewy, and perfect for hot summer days topped with berries and whipped cream. Not just enjoyed on Christmas, pavlova is celebratory dessert in both Australia and New Zealand. 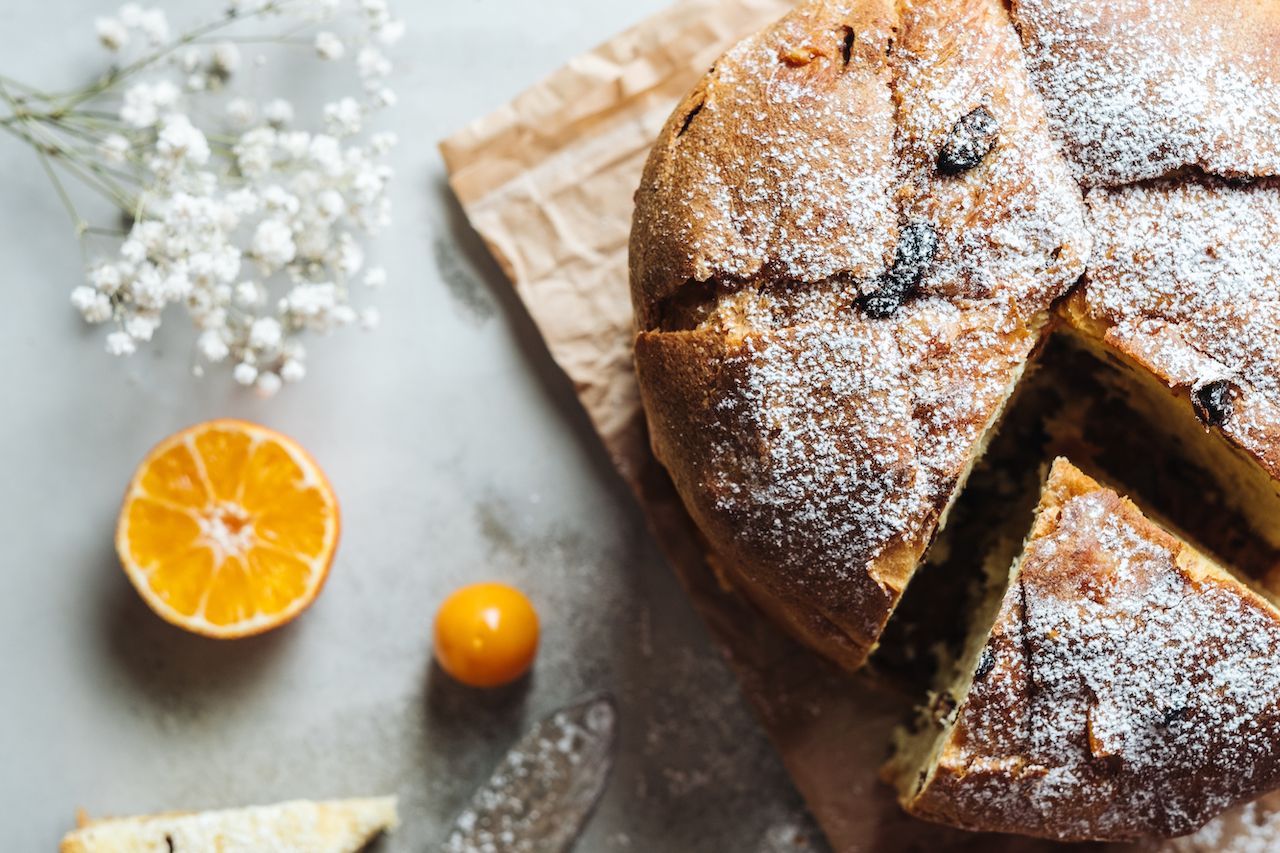 Christmas menus look different in Naples than they do in Bologna, but there are a few rules most Italian families follow. First, the Christmas dinner should be seafood-based. Southern Italy originated the now-Italian-American Feast of the Seven Fishes, or La Vigilia, which turns the night of the 24th into a seven-dish seafood extravaganza following a day of fasting. The next day, on Christmas, families swap recipes like linguine with mussels and baccalà (baked salt cod) for meat-heavy dishes like lasagne alla Bolognese and braciole (rolled, filled flank steak).

Most famous of all is Italy’s classic Christmas bread, panettone. Panettone is a sweet loaf filled with candied and dried fruit. Originally from Milan, it’s now enjoyed across the country come Christmas, although Verona has its own version. Called pandoro, the Veronese loaf is star-shaped, has no added fruit, and comes dusted in powdered sugar. 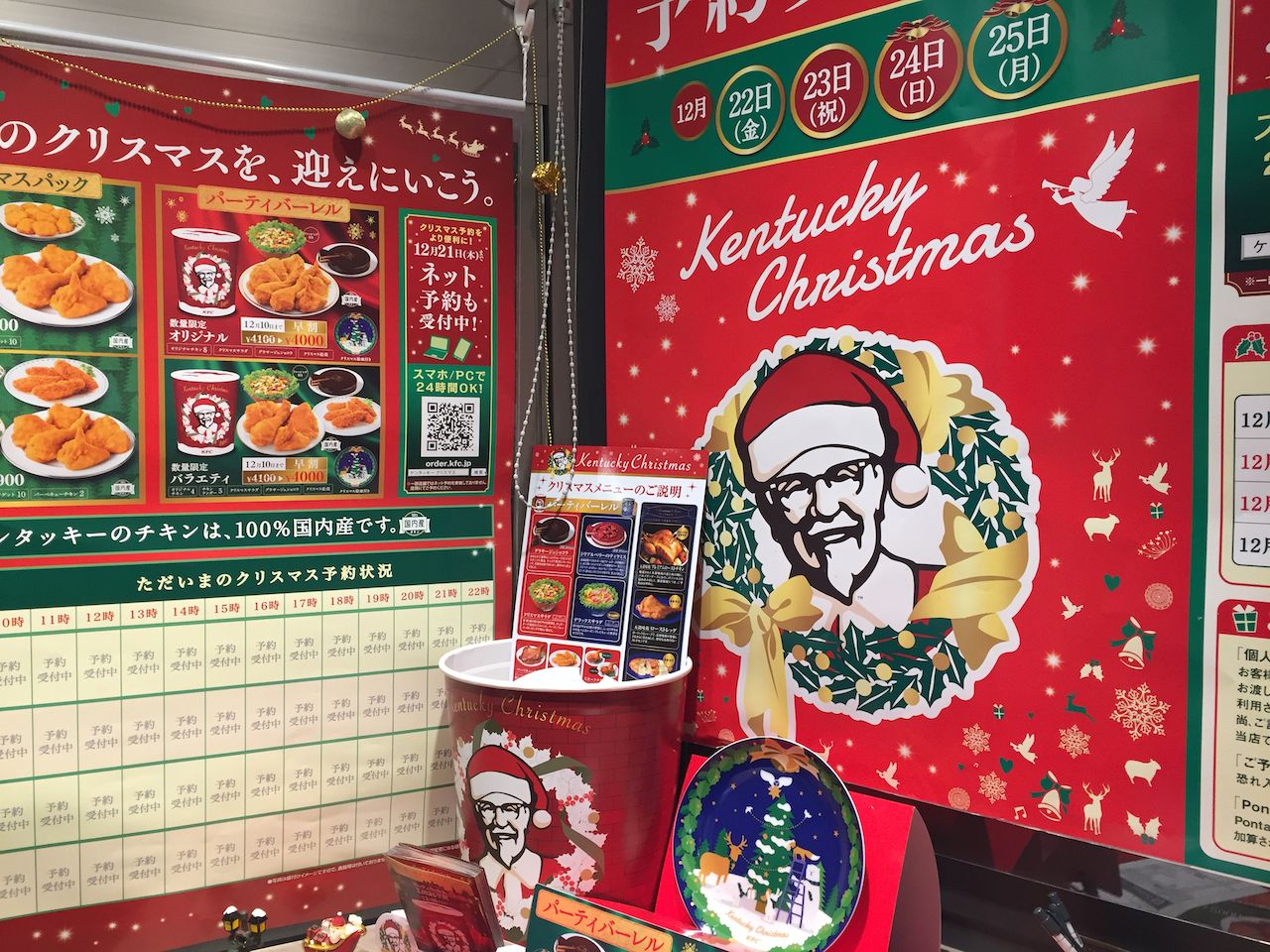 Though the majority of Japanese citizens practice Shintoism, Buddhism, or both, many acknowledge Christmas as a cultural holiday. It makes sense, then, that Japan’s traditional Christmas dinner is the result of a marketing ploy. It all started when the former manager of the first KFC, and later CEO of the company, saw an opportunity to advertise chicken dinners in Japan as an alternative to the Western turkey dinner. Now, millions of families participate in Japan’s Kentucky Fried Christmas, with many ordering KFC’s special Christmas dinner in advance due to the high demand. Others may simply celebrate the occasion with a nice dinner, much as they would a birthday or anniversary. 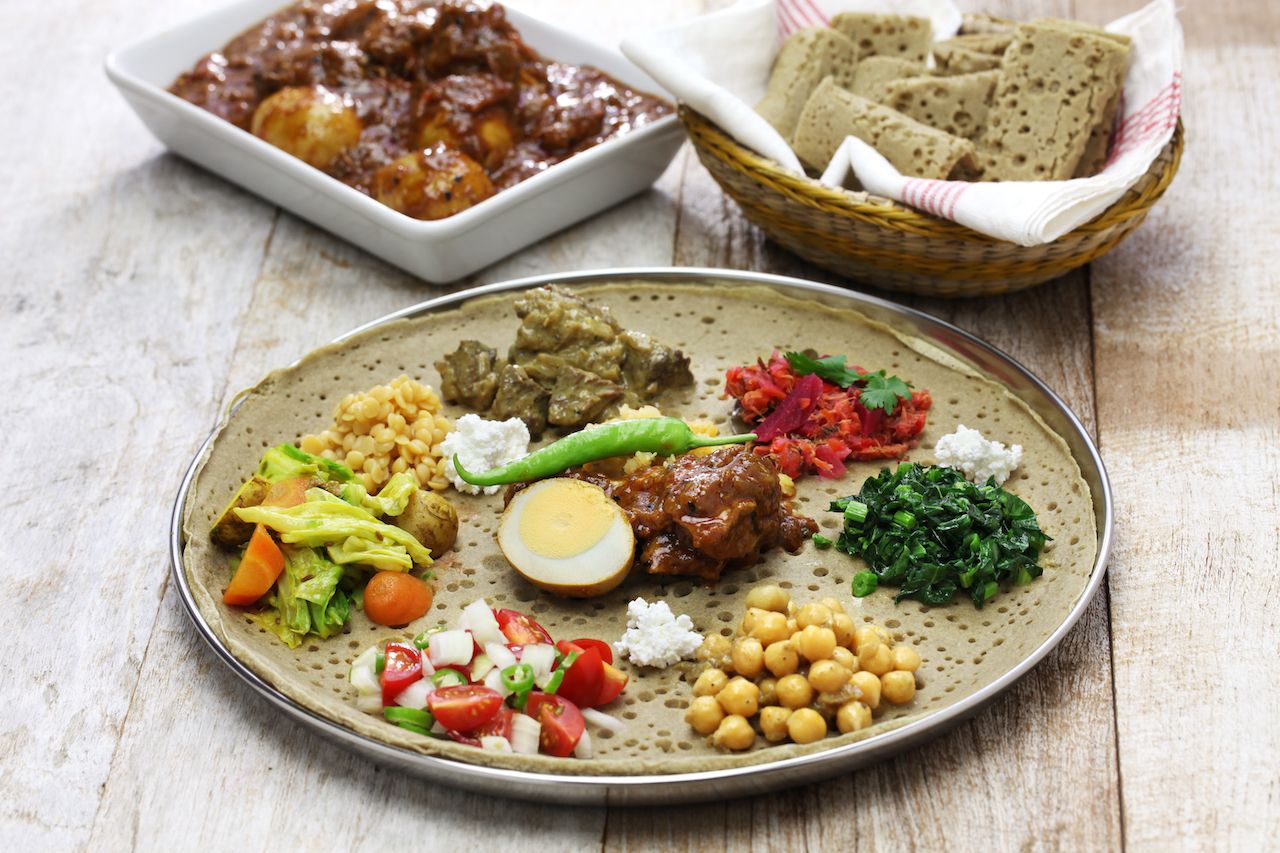 In the Ethiopian Orthodox tradition, Christmas is celebrated on January 7 (when Christ was born according to the Julian calendar). The holiday is known as Ganna, and it’s customarily preceded by a 40-day advent fast. On Christmas Eve, the fast culminates in a massive meal that typically features doro wat as the main dish. Wat refers to stew in Ethiopian cuisine and typically contains beef, lamb, or chicken, and an assortment of veggies. On Christmas Eve, rooster meat is often substituted for chicken and carved into 12 pieces in honor of the apostles. (Twelve hard-boiled eggs may also be served.) The meal is served with national dish injera, a thin, spongy bread that can double as a serving platter. To wash it all down, Ethiopians drink tej, or “honey wine.” 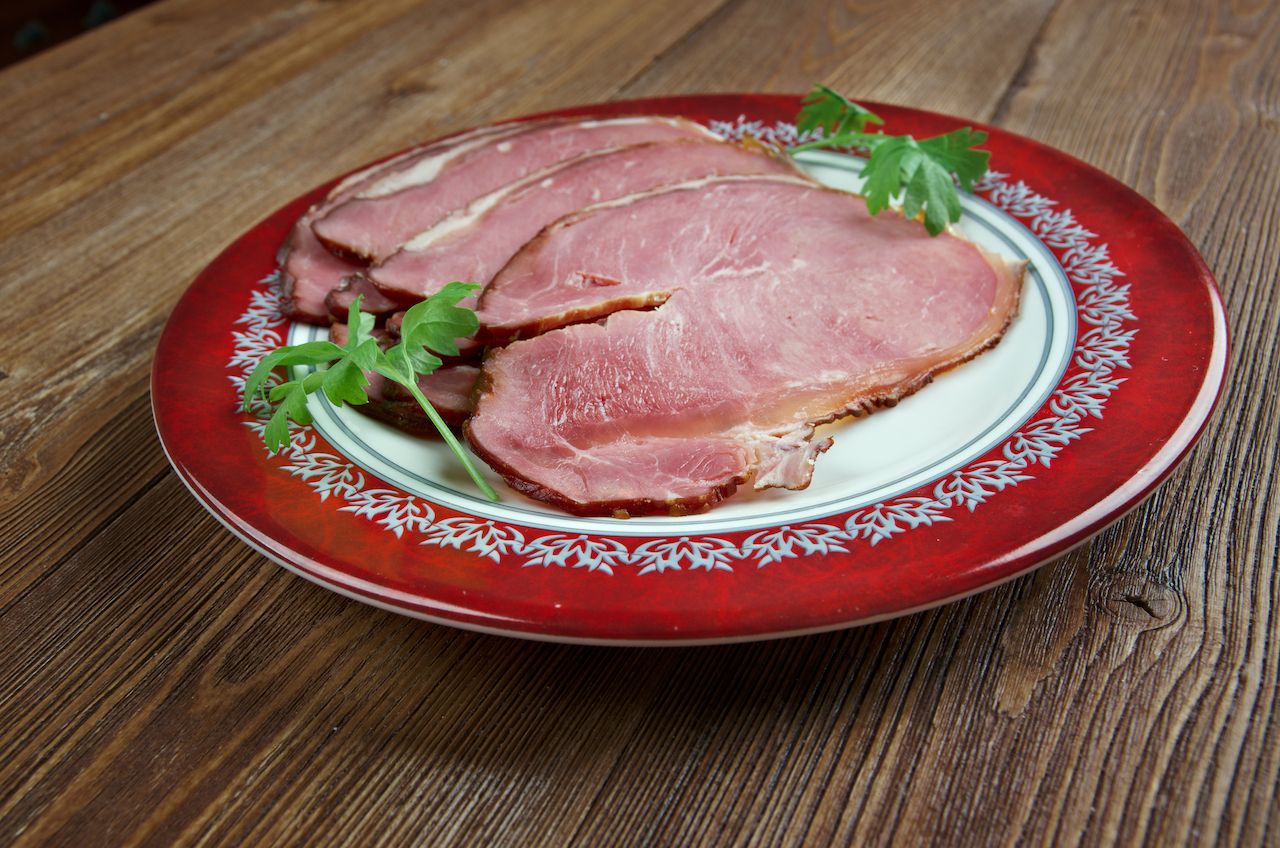 Smoked lamb, or hangikjöt, signals Christmas dinner in Iceland, where merrymakers also pile their plates with veggies like potatoes, corn, peas, and cabbage. Ham or ptarmigan, a type of grouse, may serve as additions or alternatives to the hangikjöt, and there’s likely to be herring somewhere on the menu. Rye bread accompanies most meals in Iceland, Christmas included.

There’s another bread, however, that really steals the show during the holidays. Known as laufabrauð, or “leaf bread,” it’s actually thin sheets of fried dough with patterns cut out to look like leaves rather than a single, crusty loaf. Many families gather together to create the patterned dough as a holiday activity similar to baking Christmas cookies, though laufabrauð also comes store-bought. To quench their holiday thirst, Icelanders drink malt og appelsín, a non-alcoholic beverage made from a mixture of malt and orange sodas. 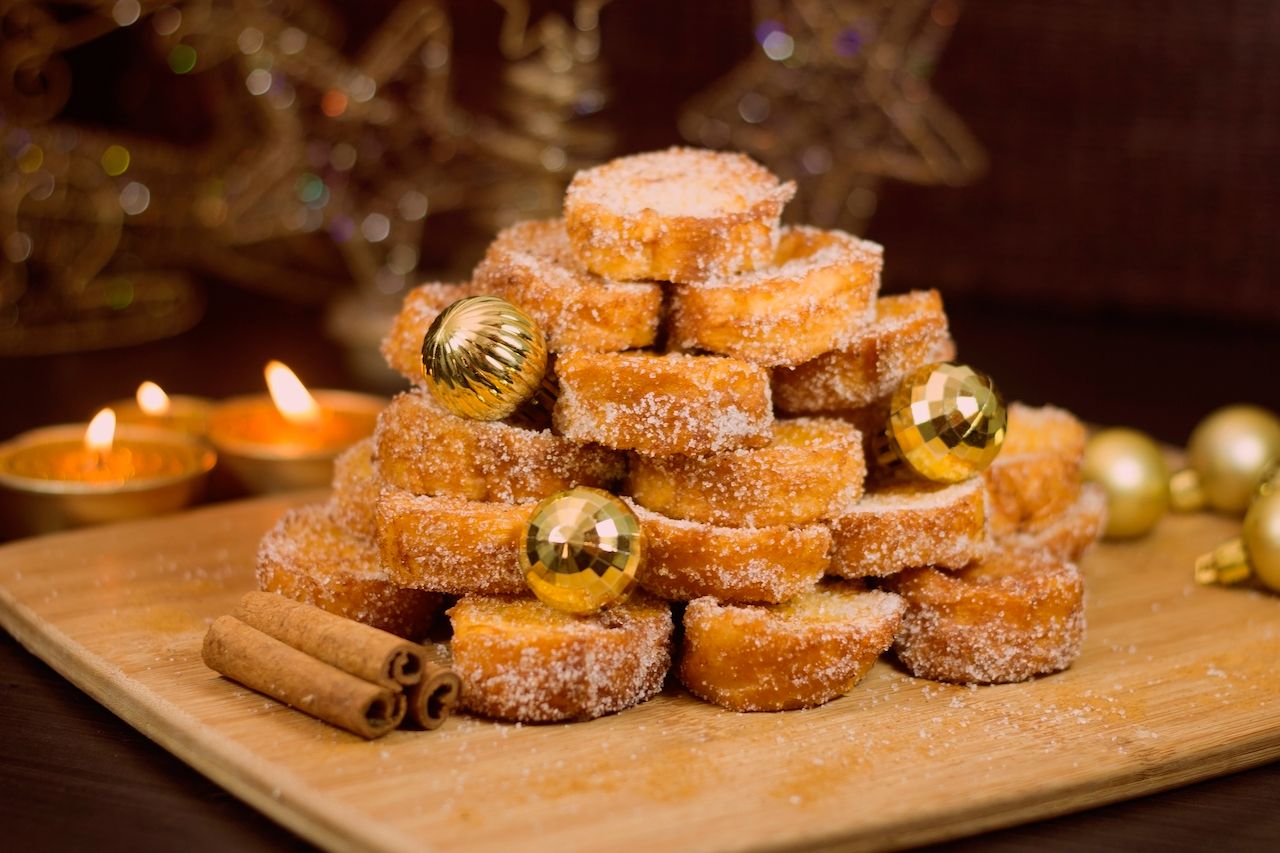 Home to more than 200 million people, most of them Christian, Brazil is as lively as you might expect when Christmas rolls around. On Christmas Eve, nearly everyone in the nation stages a big feast with their family using ingredients native to the region. Though specific dishes vary, there is one uniquely Brazilian Christmas tradition: trading in roast turkey for Chester, a genetically modified super chicken, as the star of the meal.

Alongside the pumped-up birds, Brazilian families serve dishes like bacalhau (salt cod) fritters and farofa (a manioc or cassava flour mixture). Farofa has a bread-crumb-like texture and often incorporates bacon or other smoked meats, perhaps qualifying it a distant relative of stuffing. Given the summer heat when Brazil celebrates, the rest of the meal usually comprises fresh fruit- and vegetable-forward sides. For the proverbial cherry on top, Brazilians indulge in sweet treats like rabanadas, similar to French toast, and panettone.

Spirits + Cocktails7 creamy and boozy eggnogs made around the world
Tagged
Food + Drink Holidays
What did you think of this story?
Meh
Good
Awesome