The homemade eggnog in front of me had been sitting at room temperature for more than a month before I cracked the top. Still, Aaron Goldfarb, a writer for places like PUNCH and Esquire and the author of Gather Around Cocktails, reassured me that the mix of raw egg, cream, and liquor would remain shelf-stable. He would know — he made it, and it’s just a small (and, for Goldfarb, young) sample of the nogs he’s made and aged over the years.

Eggnog has been a staple in liquor cabinets around the world for centuries (albeit it’s now made with much fancier rum, brandy, and whiskey). Goldfarb’s eggnog is closer to the traditional eggnogs people drink on nearly every continent than the plastic jug found on the grocery store fridge come November.

In the United Kingdom and across Europe, beer and wine, and later liquor, stabilized medieval egg and cream drinks to make a thick, creamy beverage. Nearly every country in Central and South America has a version, as does Japan. In America, various versions of eggnog using rum and whiskey have been around since the first colonies. George Washington even had an especially booze-heavy recipe for visitors to Mount Vernon that incorporated a pint of brandy, half a pint each of rye and rum, and a quarter pint of sherry. All of these nogs were aged and consumed merrily, without any fear that leaving raw egg and dairy out in the open for months might be hazardous. 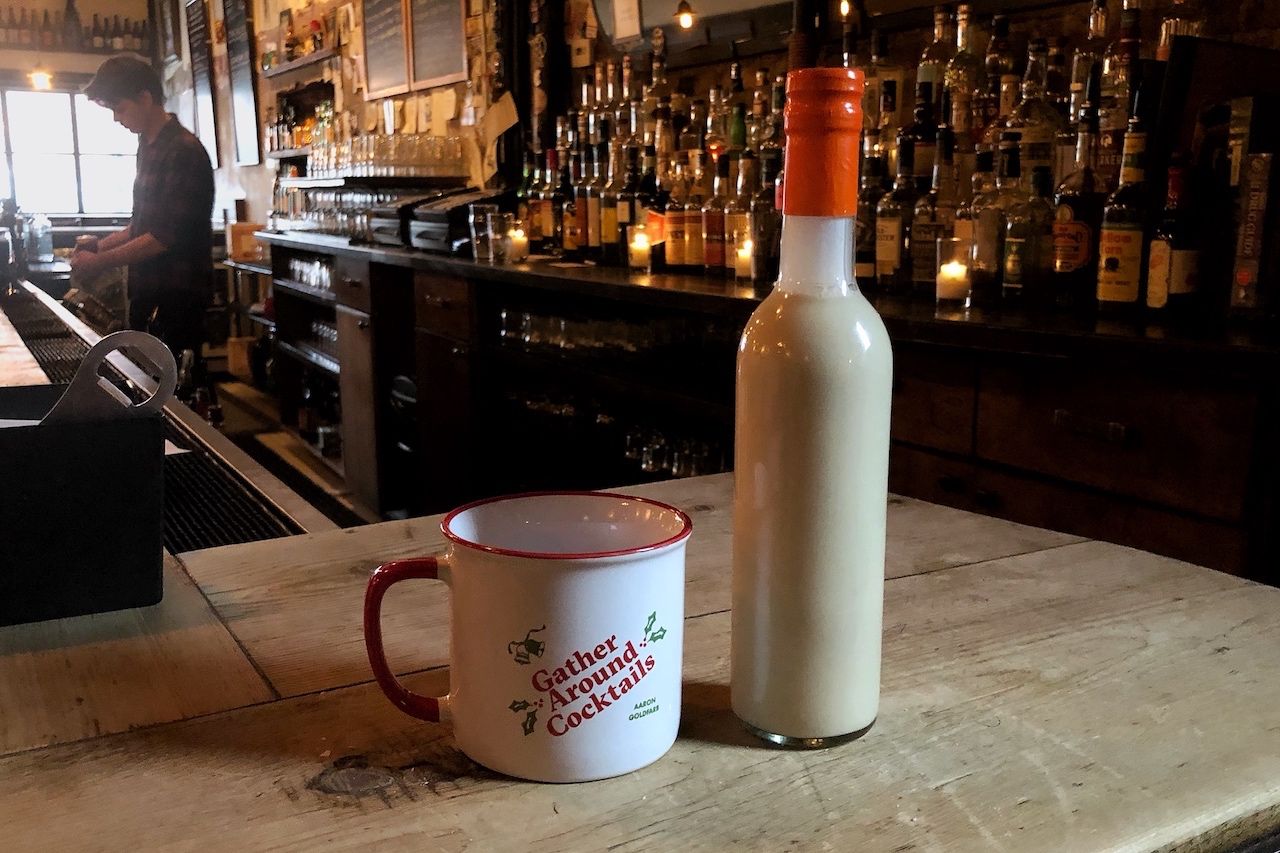 Goldfarb admits to me that he came to eggnog late in his life. He’s more than made up for lost time, though. His holiday cocktail book is dedicated to his wife, “the daughter of a Christmas tree farmer who taught this Jew to love eggnog.” In it, he describes his own recipe that he has perfected over the past five years as well as variations from other countries. Variations, he adds, that were easy to recreate.

“Why does every country have an eggnog? I don’t know,” Goldfarb says. “I guess every country has eggs, milk, and booze. The holidays are about decadence, and this is about the most decadent thing you can put in your body.”

Goldfarb keeps a batch of five-year-old eggnog that he occasionally samples to see how it ages along with the new batches he makes every year. Homemade eggnog, he notes, peaks in the first couple months. His recipe is simple: eggs, whole milk, heavy cream, sugar, bourbon, dark rum, and brandy. This comparatively young eggnog is silky, nutty, and hard to put down despite the side-eye from my sister, who’s a food quality auditor at a grocery delivery company (to be fair, the alcohol makes the raw egg safe, according to researchers from Rockefeller University).

If you decide to dive as deep into the world of nog as Goldfarb has, give yourself plenty of time because the options and variations feel endless. Below are seven different nogs from seven countries and four continents. Some lose the egg, others lose the milk, but all are creamy, warming, and boozy. 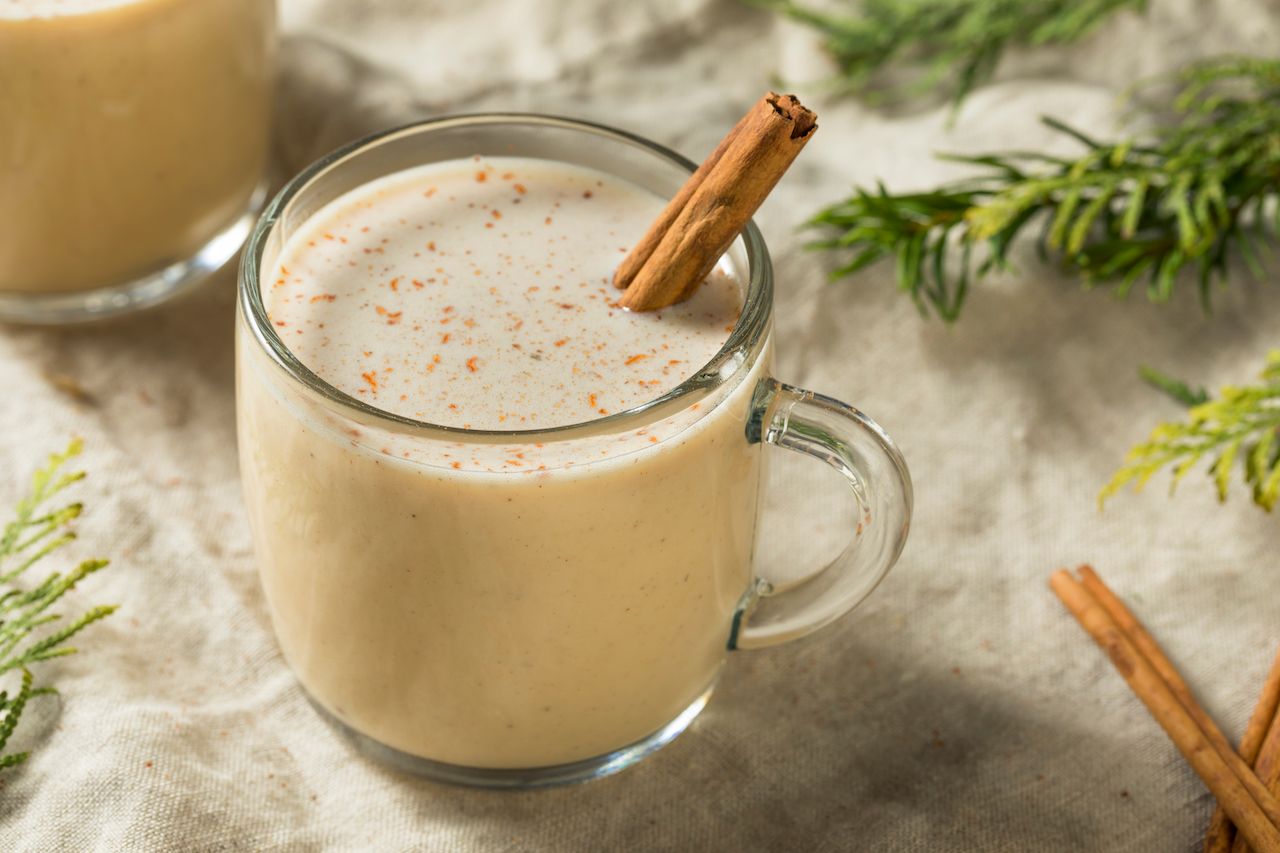 Coquito is an eggless nog that’s much more drinkable when lounging in tropical weather than traditional eggnogs from colder countries. The name means “little coconut,” and it’s made with coconut milk, coconut cream, sweetened condensed milk, and rum (though pitorro, the island’s strong sugarcane-based moonshine, is also often used).

Make it yourself: Puerto Rico’s tourism site lists an official recipe made with two cans of coconut milk, one can condensed milk, one can evaporated milk, a teaspoon of vanilla extract, two cups of rum, and cinnamon and nutmeg to taste. Let it sit overnight before drinking. 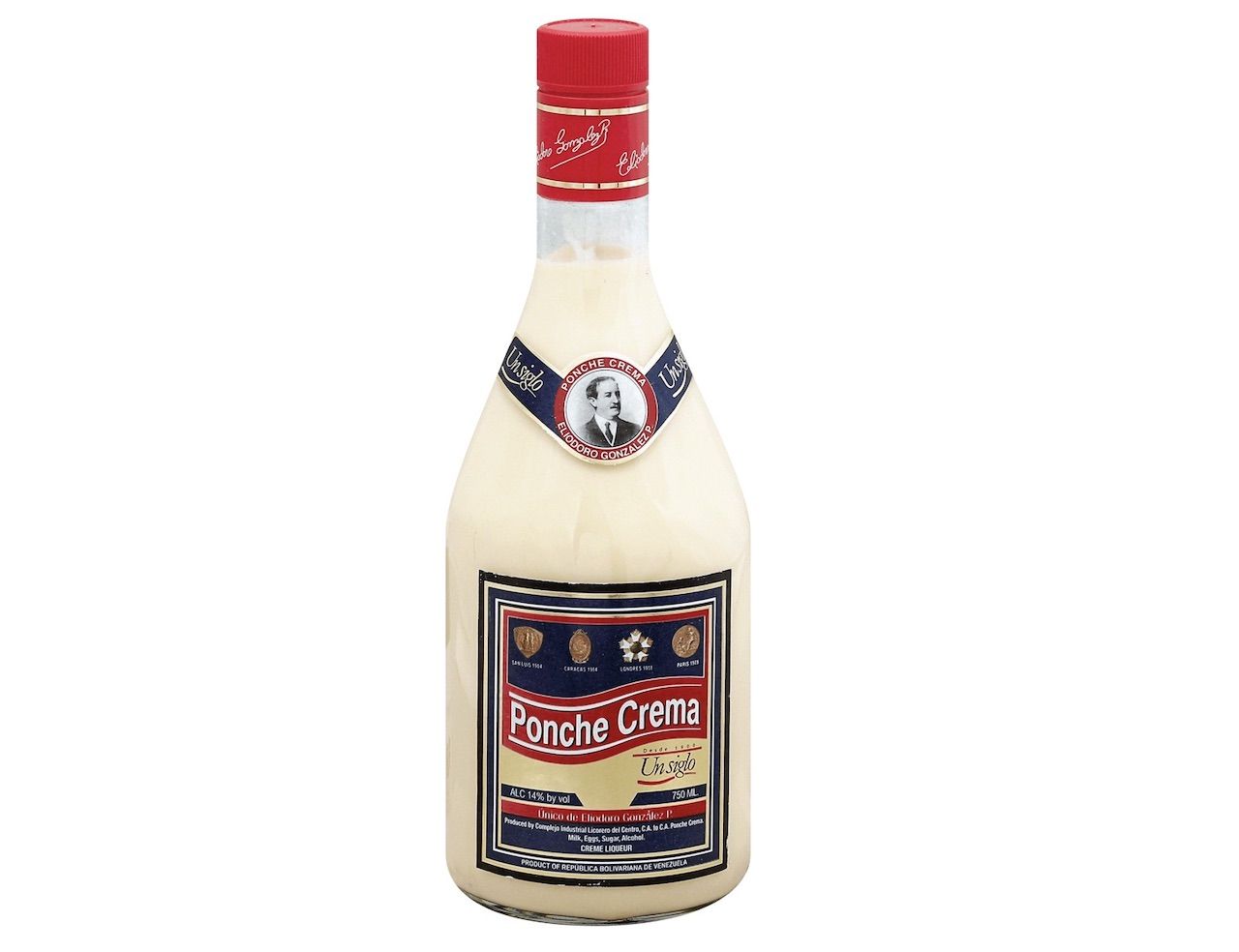 Ponche Crema is not just a traditional holiday drink — it’s a century-old Venezuelan brand. Eliodoro González P.’s company Licoreria Central made the first batch in 1900, using a patented blend of milk, eggs, sugar, and brandy. Cipriano Castro granted a patent for Ponche Crema in 1904. Homemade versions are popular in the country today as well (the Venezuelan blogger behind Anna’s Pasteleria notes that it’s also called leche de burra, or donkey’s milk), and some recipes add in flan as a thickener.

Make it yourself: The crowd-sourced recipe from Anna’s Pasteleria is made with 350 grams of flan powder, one liter of milk, one can of condensed milk, one teaspoon of cocoa powder, and a half cup of rum. 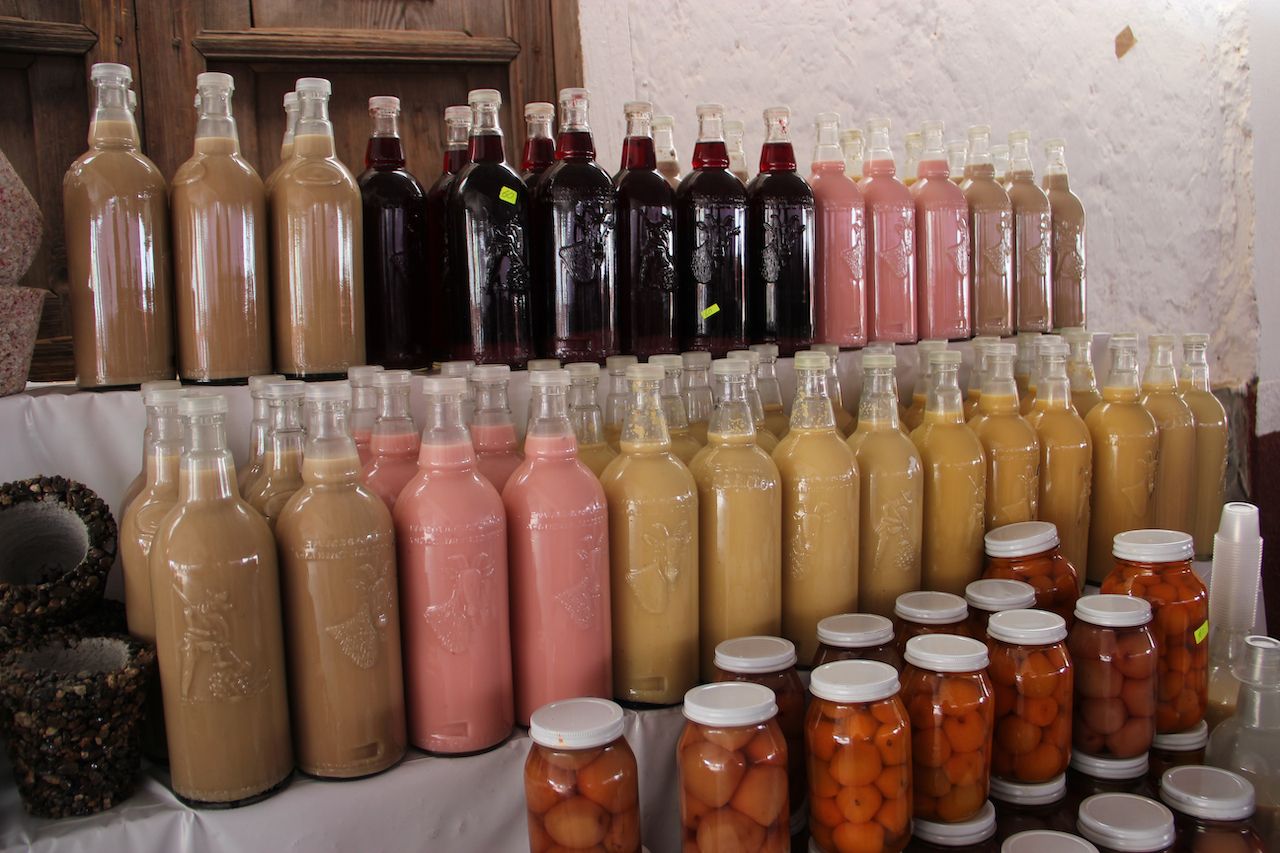 Rompope is a popular holiday drink in Mexico and Central America. Legend has it that nuns from the Santa Clara convent in Puebla, Mexico, created the drink. The ingredients list is straightforward: egg yolk, milk, sugar, rum, cinnamon, and vanilla. Ground almonds can be added for a nutty flavor, and, unlike popular eggnogs farther north, it can be served either hot or cold.

Make it yourself: A basic recipe that serves 8-10 people uses six cups of whole milk, one and a half cups of sugar, one teaspoon of vanilla extract, eight egg yolks, cinnamon to taste, and one cup of aguardiente (a rum-like sugarcane spirit). 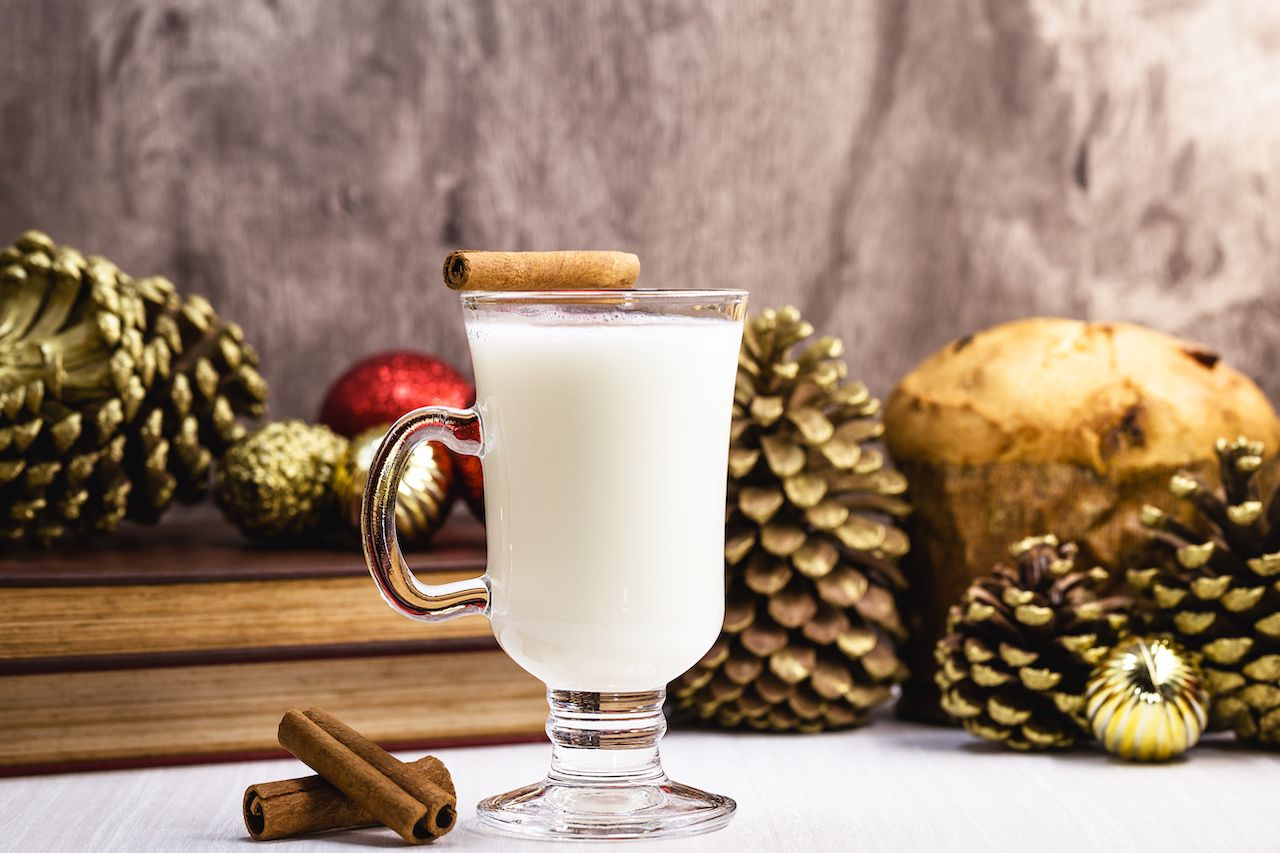 This German cocktail is popular at Christmas markets and holiday parties. Eierlikör, a thick, egg-based liqueur (though it’s not unheard of to make your own with eggs, sweetened condensed milk, and brandy or whiskey) is the central ingredient. What sets it apart from other eggnogs is that it’s thick enough to eat with a spoon. Also, a sweet white wine is usually added, though some recipes call for black tea to lighten it up.

Make it yourself: Mix one bottle of eierlikör with two cups of sweet white wine (riesling, if you want to be regionally accurate) and a quarter cup of aged rum, brandy, or whiskey. 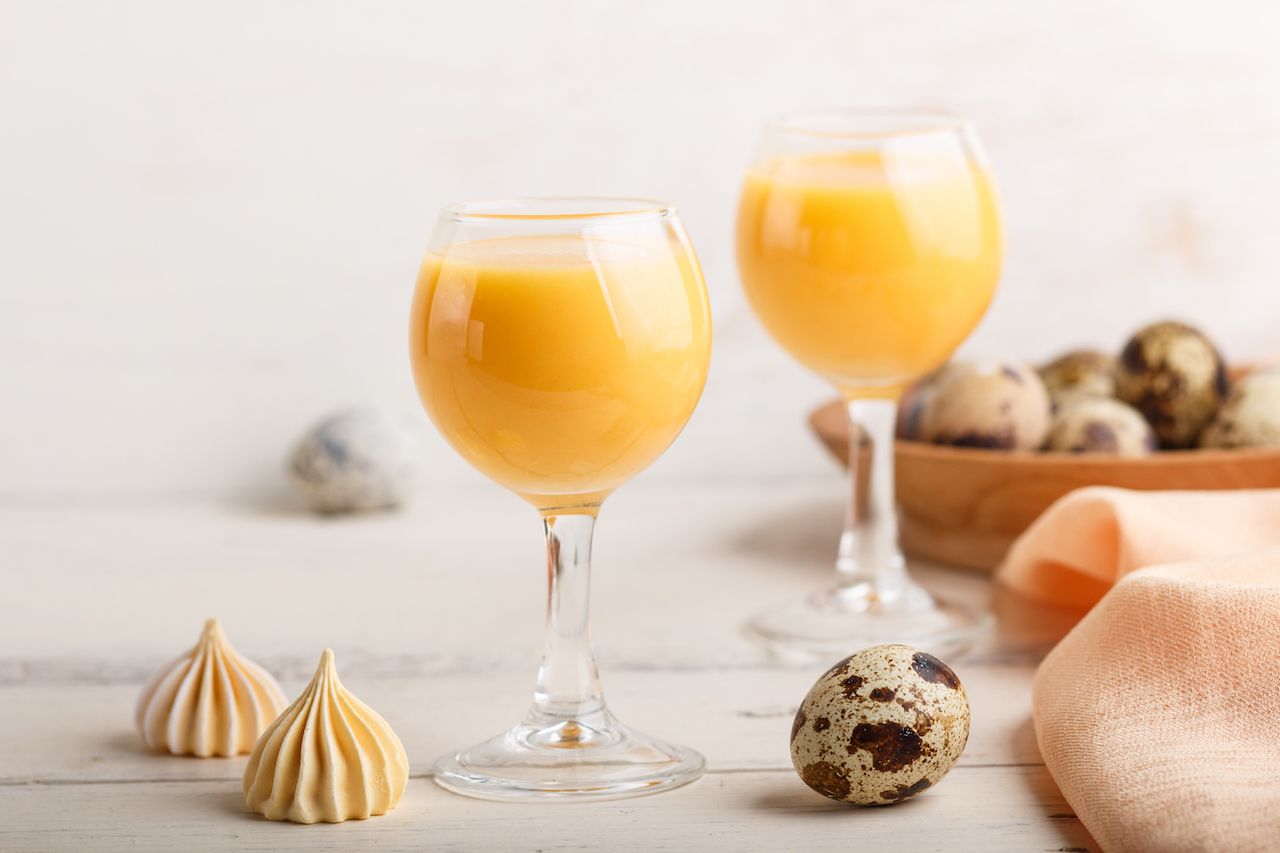 Nearly identical to the German eierpunsch, the Dutch advocaat is made with a base of egg-based advocaat, similar in flavor to eierlikör. Legend has it that the liqueur was invented on the Dutch-German border in the late 1800s when a distiller tried to remake an avocado drink that Dutch colonists were sipping in Brazil (hence the name). Avocados were much harder of a thickening agent to come by than they are today, so eggs took the spotlight.

Make it yourself: Start with a bottle of advocaat (Bols and Verpoorten make popular versions) and simply pour it into a glass.

The Scottish like their thick and creamy winter cocktail particularly on the New Year’s Eve celebration Hogmanay, which starts on the last day of the year and can run into January 1 or 2. The drink’s name is inspired by Auld Lang Syne, the New Year’s song written by Robert Burns. To honor Scotland, only Scotch whisky should be used in Auld Man’s Milk.

Make it yourself: Separate the eggs and yolks of six eggs and beat them separately. Add the yolks to two cups of sugar, a quart of milk, and two cups of scotch. Add the egg white and mix before garnishing with nutmeg.

It’s not a seasonal drink per se, but tamagozake has enough of the most common eggnog ingredients to be included on this list. The name translates to “egg sake,” which accurately describes the egg, sugar, and hot sake ingredients, and it’s traditionally drunk as a cold remedy.

Make it yourself: Add an egg and two tablespoons of sugar to a bowl and beat it. Whisk in half a cup of warm sake.