You’ve almost certainly indulged in mulled wine during the holiday season, but head to various cities around Europe and you’ll discover a lot of different festive drinks featuring spices, whipped cream, and plenty of alcohol. But it’s not just the ingredients that set them apart. From lighting things on fire, dancing around trees, and eating 12 dishes for Christmas dinner, these drinks have various rituals surrounding them and are important in European culture. Here’s where you can go to try some of these traditional festive drinks in Europe. 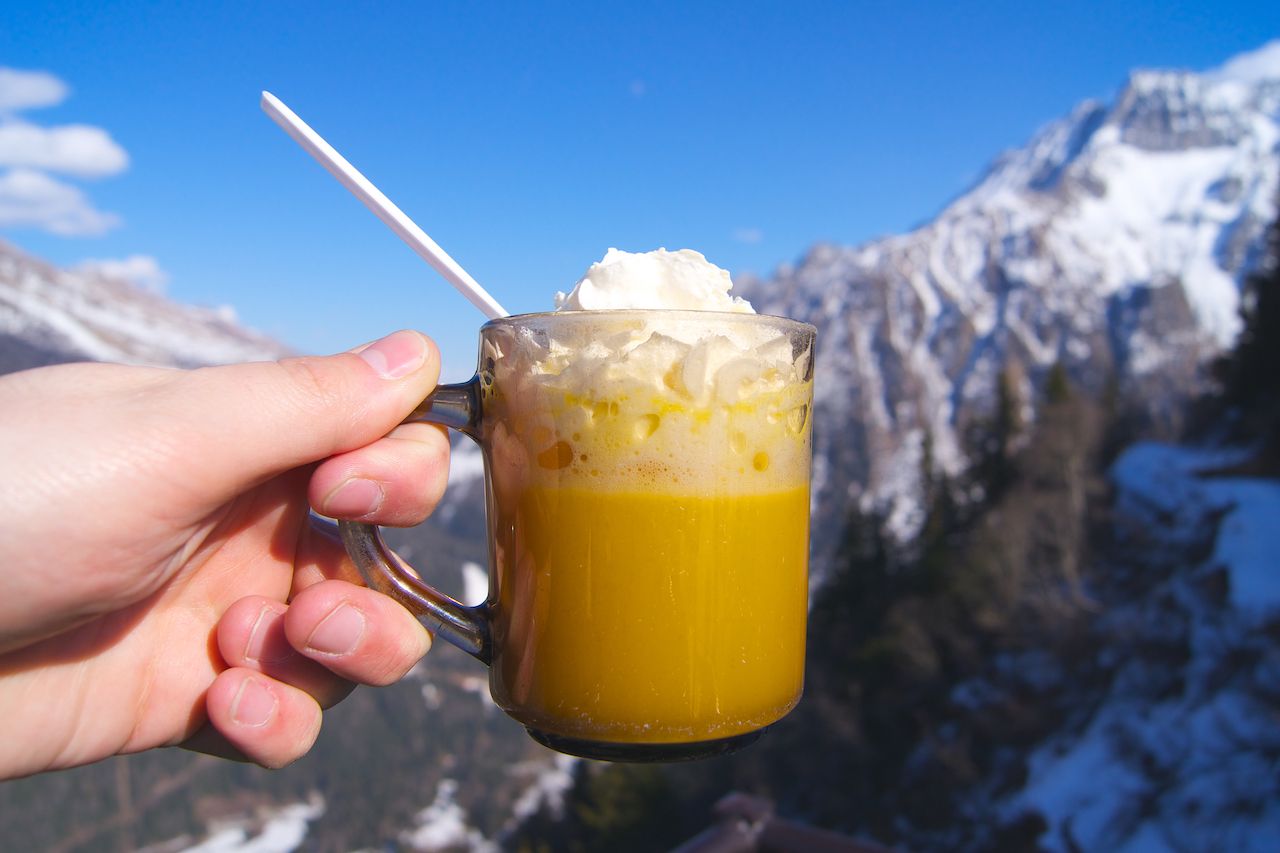 Italy’s answer to eggnog is bombardino, which uses a mix of brandy and alcoholic egg-based zabaglione to create a potent, orange “bomb.” Being Italian, it naturally has a flourish of whipped cream on top. It’s commonly found at ski resorts bars across the Alps as well as most Christmas markets in the north of the country.

To have a taste, head to the famous Christmas markets in Bolzano, just south of the Austrian border, and make regular pit stops for bombardino to warm frozen hands and feet. Alternatively, visit the markets of Asiago and sip bombardino while you browse the handmade holiday decorations and admire stalls set against a snowy mountain backdrop.

If you want the real Italian mountain experience, however, you need to visit a rifugio, a restaurant with accommodation found high in the mountains. Rifugio Mulino di Laval, for example, can serve you a toasty bombardino as you look out across the Piemontese landscape. It’s a great place go skiing, too. And if you’re skiing in popular resorts like Courmayeur, you’ll find bombardino is the drink of choice. 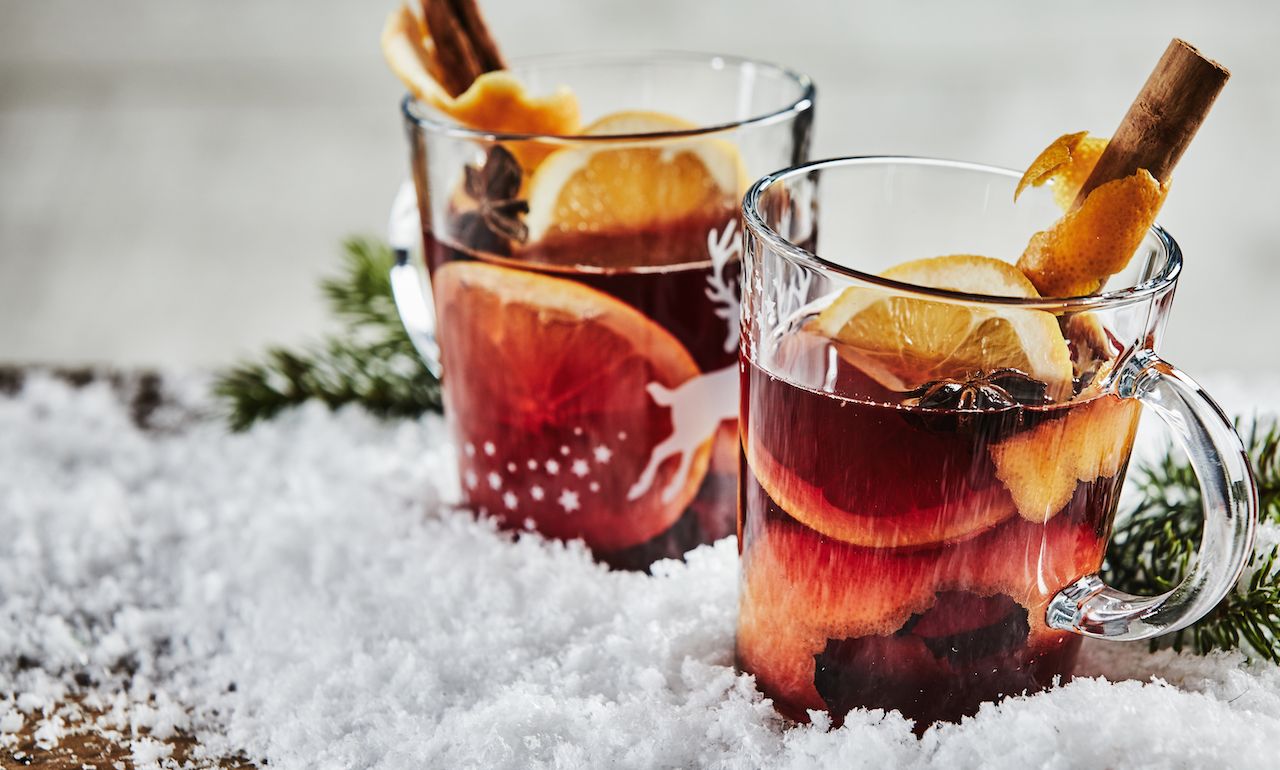 Hot and alcoholic also describes England’s traditional festive tipple. In medieval times, Twelfth Night saw people singing and drinking in orchards in a ritual that was intended to help the apple trees thrive in the coming spring. They drank a mulled cider, which was warm and spiced, called wassail. In recent years, this ritual has been revived by young people in England, becoming quite an event in some places.

For a wassailing experience, visit the award-winning restaurant, the Ethicurean, for its annual wassailing on the 11th and 12th of January where there’s storytelling, live music, and a four-course seasonal meal accompanied by mulled cider. Alternatively, join cider experts at Sheppy’s Cider for an evening of food, fire, and dancing.

If you’re not really one for dancing around trees, then head to London’s Mayfair neighborhood and sip on a sophisticated version of wassail at Manetta’s Bar. This tipple mixes Champagne cognac with apple juice, nutmeg, cinnamon, vanilla, and allspice for that festive flavor. 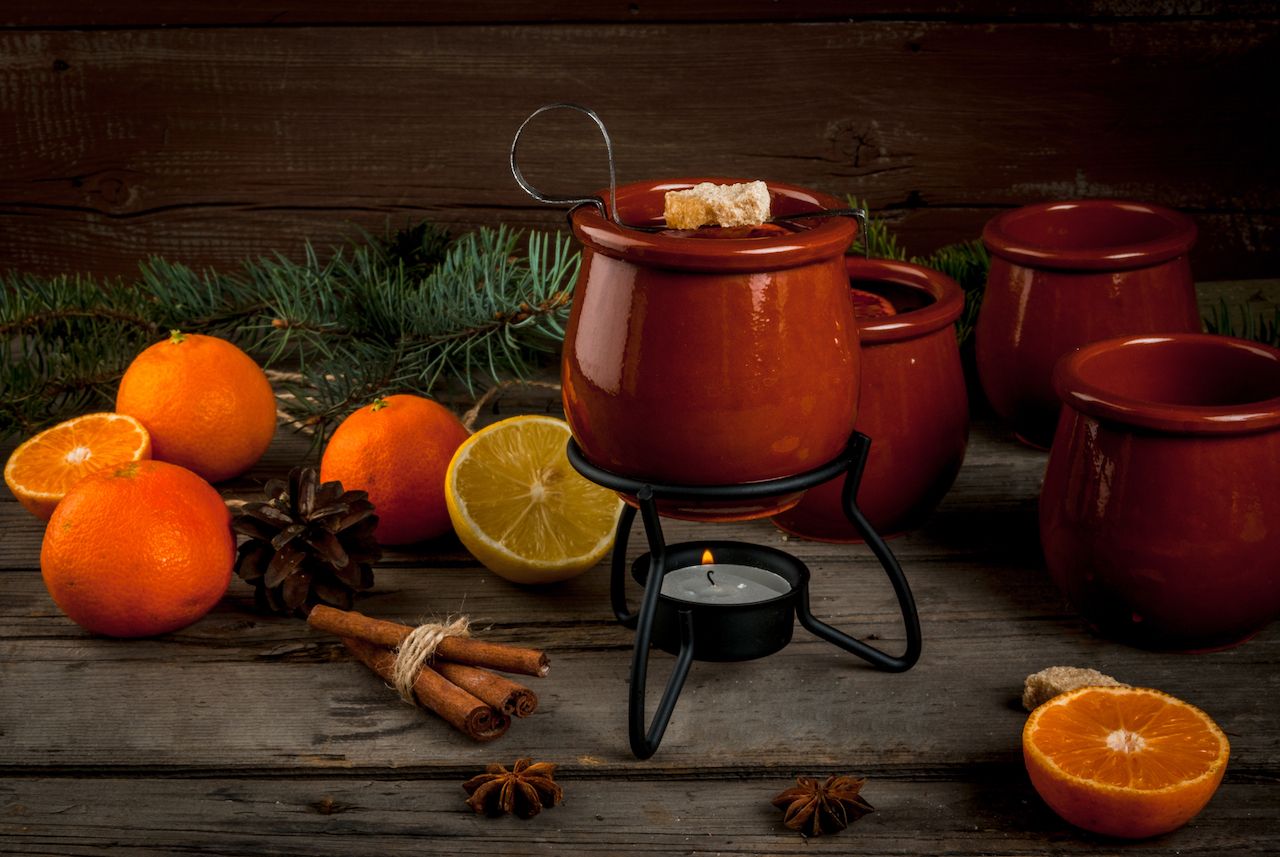 Specific rituals are also upheld when it comes to Christmas drinking in Germany. Feuerzangenbowle is not quite as easy to pronounce as the more commonly known glühwein, and the procedure for drinking it is also a bit more complicated. Red wine is poured into a bowl that’s heated underneath with a flame. A metal grate is then put over the top of the bowl and a rum-soaked sugar cone is placed on top. The sugar is then set on fire and allowed caramelize and melt into the wine.

An essential place to try this is at its dedicated festival in Tübingen. While a giant vat is prepared, everyone gathers in the central square to watch a film called Die Feuerzangenbowle, where the tradition of the drink partly originates.

But if you want to see something quite spectacular go to Nuremberg’s Christmas markets, where this year the organizers are aiming to take the title of largest feuerzangenbowle in the world through their dedicated Feuerzangenbowle Village. With true German efficiency, giant bowls have been engineered to stay hot with help from central heating company Stiebel Eltron. 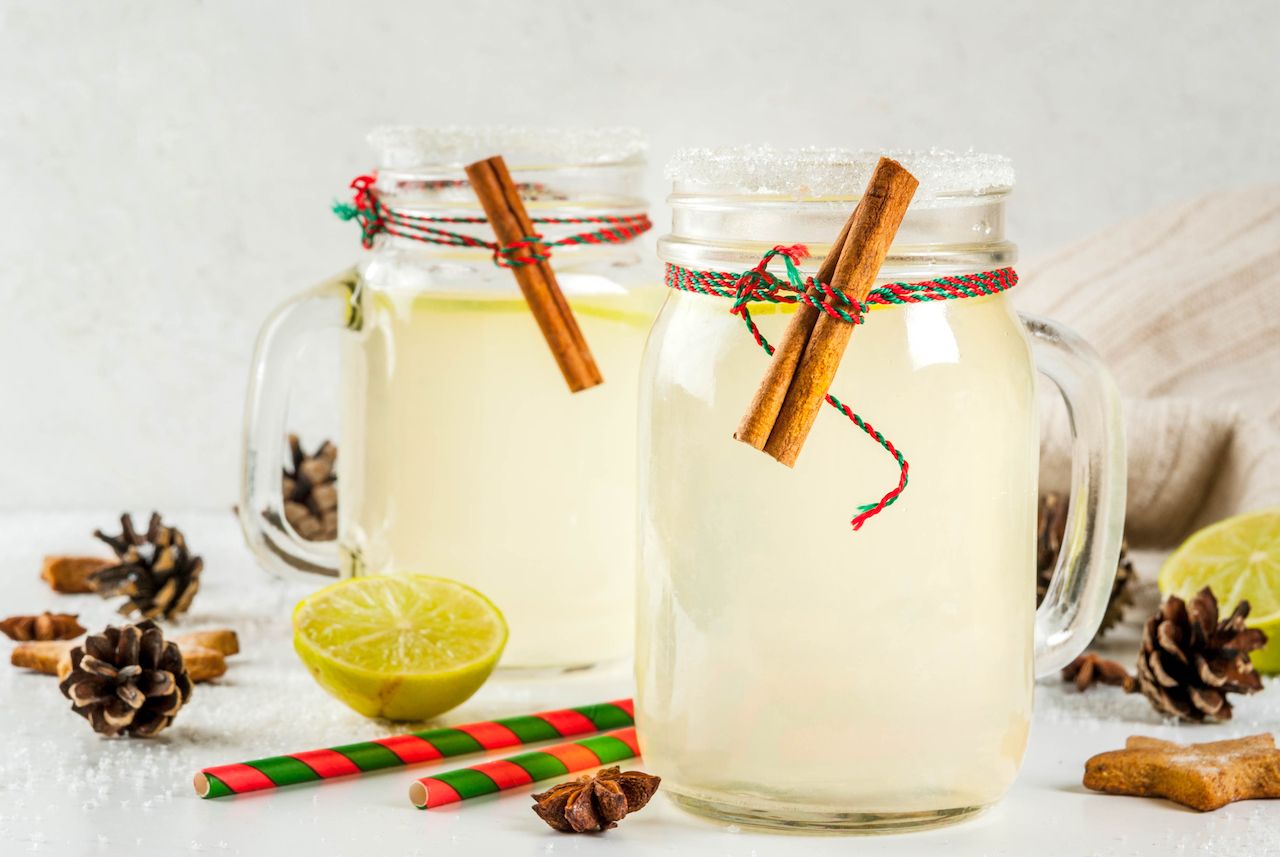 Archaic rituals aside, one vintage cocktail is making a comeback in the UK. The snowball is traditionally made from mixing advocaat and lemonade. Despite being a British classic, it fell out of favor for a while, but it now seems to be appearing on menus again along with many other popular cocktails from the ‘70s.

Visitors to London this Christmas should head to Covent Garden and visit pop-up bar Miracle. Not only does this Christmas-themed bar make you feel like you’ve stepped into a chalet in the Alps, but you can try a snowball old fashioned made by experts from Experimental Cocktail Club. LINO is another new opening in the Square Mile which is going to offer twists on kitsch favorites including, of course, the snowball.

Outside of London and right across the country, the snowball is also popping up on Christmas cocktail menus. George’s Great British Kitchen in Leeds serves British food with a twist, and its snowball has a sprinkling of cinnamon for added warmth. In Liverpool, recently opened Dirrty Doughnuts specializes in alcoholic doughnuts, so naturally, for the holidays, it has a snowball “drunkin doughnut.” 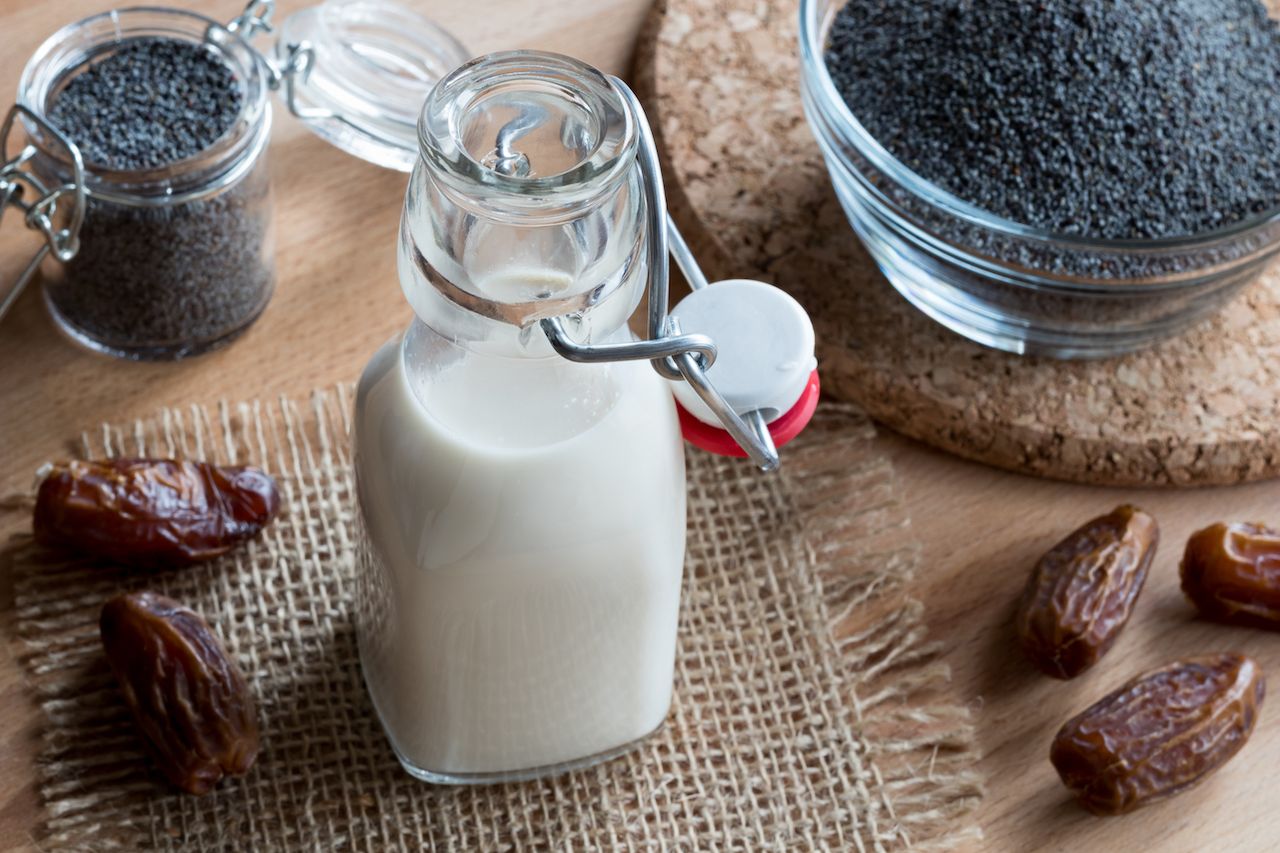 Alcohol may seem a vital part of any Christmas drink, but Lithuania’s traditional festive drink, gauonų pienas, offers a non-alcoholic way to finish off Christmas dinner. It’s usually one of the 12 dishes prepared for Christmas Eve supper, as is tradition in Lithuania. It’s made from poppy seeds softened in hot water for a couple days and crushed, and then sweetened with honey or sugar. It’s used as a dessert, accompanied by kūčiukai, which are little poppy seed biscuits.

The drink is a core part of family Christmas meals, so if you’re interested in actually having it in Lithuania, you better aim for having a traditional Christmas Eve supper with a local family. That said, fish restaurant Žuvinė in Vilnius is hosting a Christmas Eve meal this year. Its menu contains the traditional poppy seed milk and biscuits for dessert. 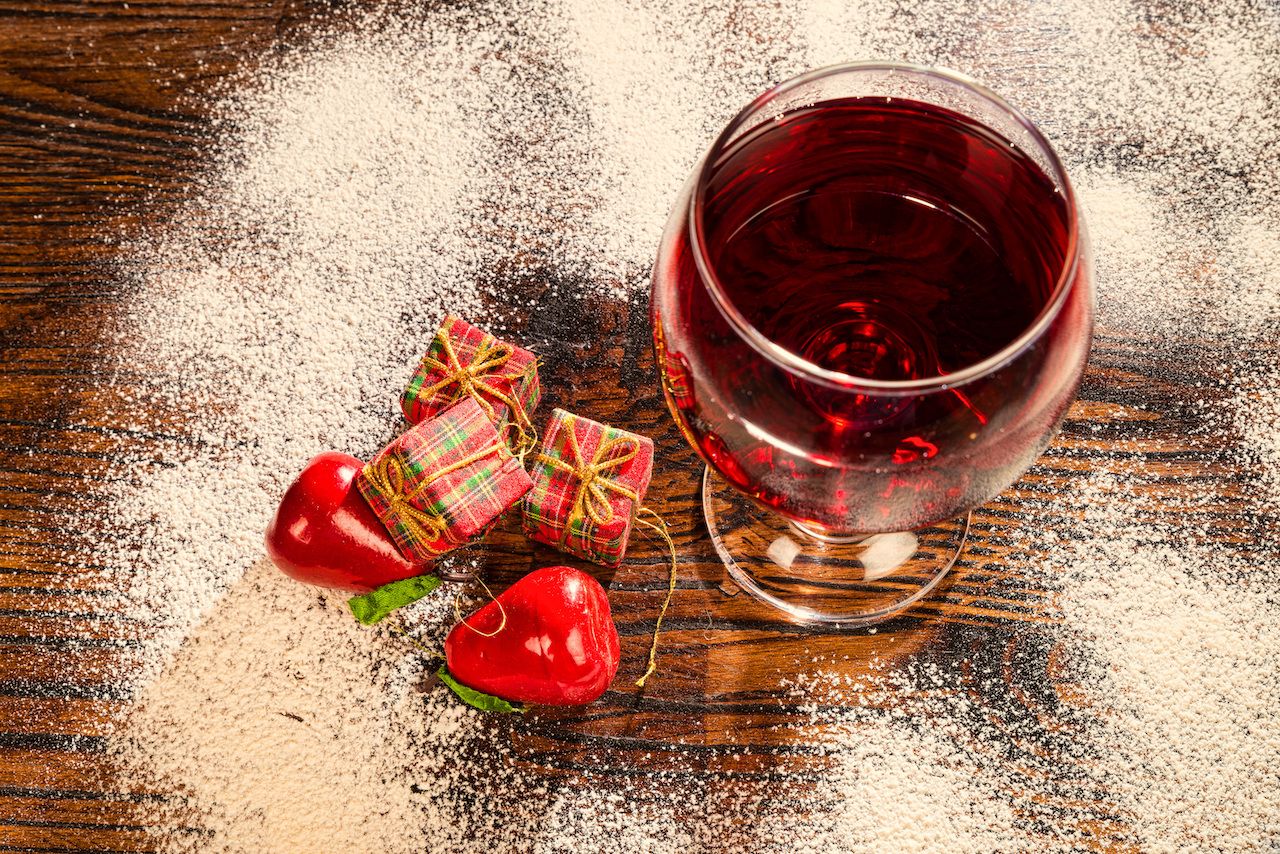 Sweden, too, offers some respite from the prolific alcohol consumption with its extremely popular soft drink, julmust. It has a hoppy root beer-like flavor, but the actual recipe is a secret. It’s so popular in the region that Coca-Cola sales drop by around 50 percent over the festive season.

To try julmust when you’re in Sweden, you just need to pop into a supermarket or shop. There are several producers of the drink, but the biggest in Sweden are Nygårda and Apotekarnes. Julmust is hard to find outside of Sweden but, if you’re desperate, try locating the nearest Ikea which often stocks the drink over the Christmas season.

The top Portugal Airbnbs for an unforgettable trip to the country’s coasts, hills, and cities