Costa Rica is known for its waterfalls, beaches, sustainability, and pura vida lifestyle. One thing that should be on that list as well: the food.

“Our cooking reflects the tropical abundance we have everywhere in Costa Rica,” says Isabel Campabadal, a chef born and raised in San José.

Today, Campabadal is considered the creator of modern Costa Rican cuisine, and is the first to say that the country’s dishes more than deserve to share the pedestal with the cuisine of the European countries where she studied cooking.

In Costa Rican cooking, Campabadal says, three things are important: different textures, different colors, and different flavors. Dishes are filled with fruits, roots, and vegetables from the region, like the nutty pejibaye fruit, yuca, and plantains. Mangos, originally from Southeast Asia, have found a more than welcoming second home in Costa Rica. Fish is abundant, as to be expected in a country with two coasts, and dishes filled with rice, beans, chicken, and pork are as delicious as they are nourishing.

It would take years to fully explore the cuisine of Costa Rica, but you could do worse than start with these 12 dishes. 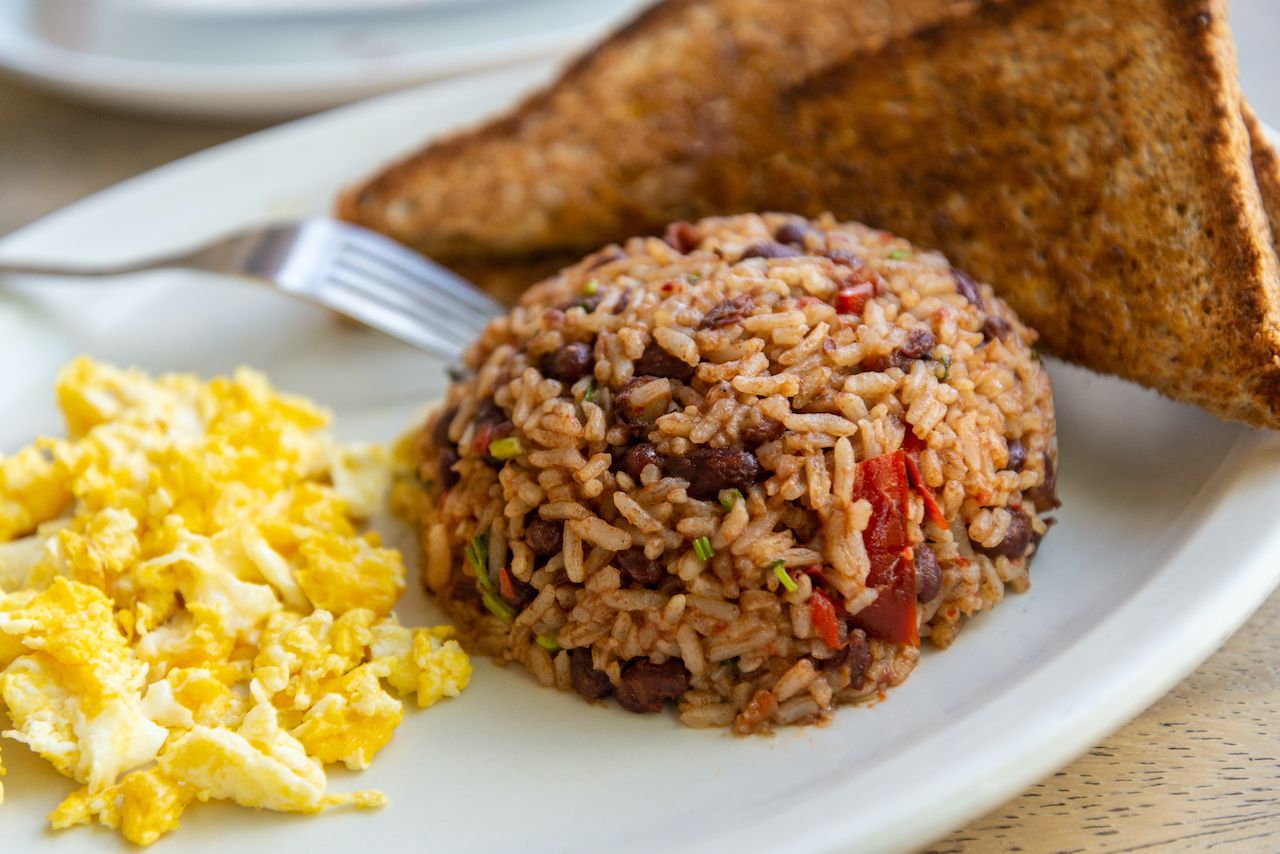 Gallo pinto translates to “spotted rooster,” and it’s made with rice and either red or black beans cooked with onions, garlic, sweet pepper, and cilantro. The name comes from the speckled look of beans in rice.

In Campabadal’s book Costa Rica Cocina y Tradición, she writes, “If any one dish defines Costa Rican cuisine, it is Gallo Pinto: the omnipresent mixture of rice and beans that’s served with egg or sour cream of breakfast, or with beef, chicken, fish or a pork chop for lunch.” 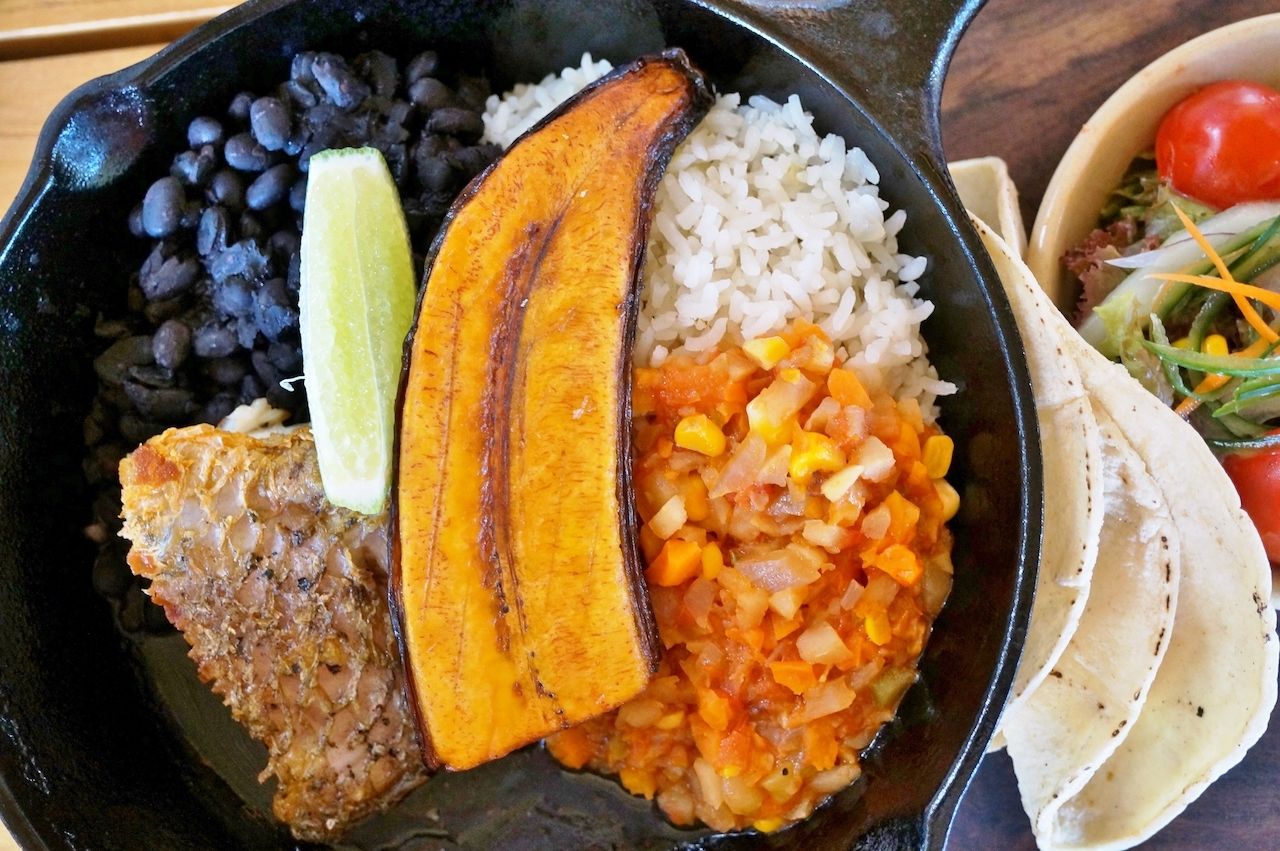 Casado translates to “married,” but in the case of food rather than relationships, it refers to a popular dish of black beans, rice, a protein (usually chicken or fish), plantains, tortillas, and, occasionally, a fried egg. The hearty meal is typically served for lunch.

According to Campabadal’s book, legend has it that the dish got its name when the workforce shifted from the country to the cities. Laborers would bring packed lunches made by their wives, and “city workers soon began to ask for lunches like those enjoyed by the ‘casados.’” Though there’s also the possibility it’s named after the marriage of flavors on the combination plate.

This dish is made with pork, garlic, onion, tomatoes, cilantro, and corn — specifically pozol (also spelled pozole and also known as hominy). The corn was important to both Mayan and Aztec religious and warrior traditions. The name itself comes from the Nahuatl word pozolli, which means cooked corn.

Pigs were introduced to the Americas by Europeans in the 1500s, and the meat became a natural fit for this savory meal of cooked corn. 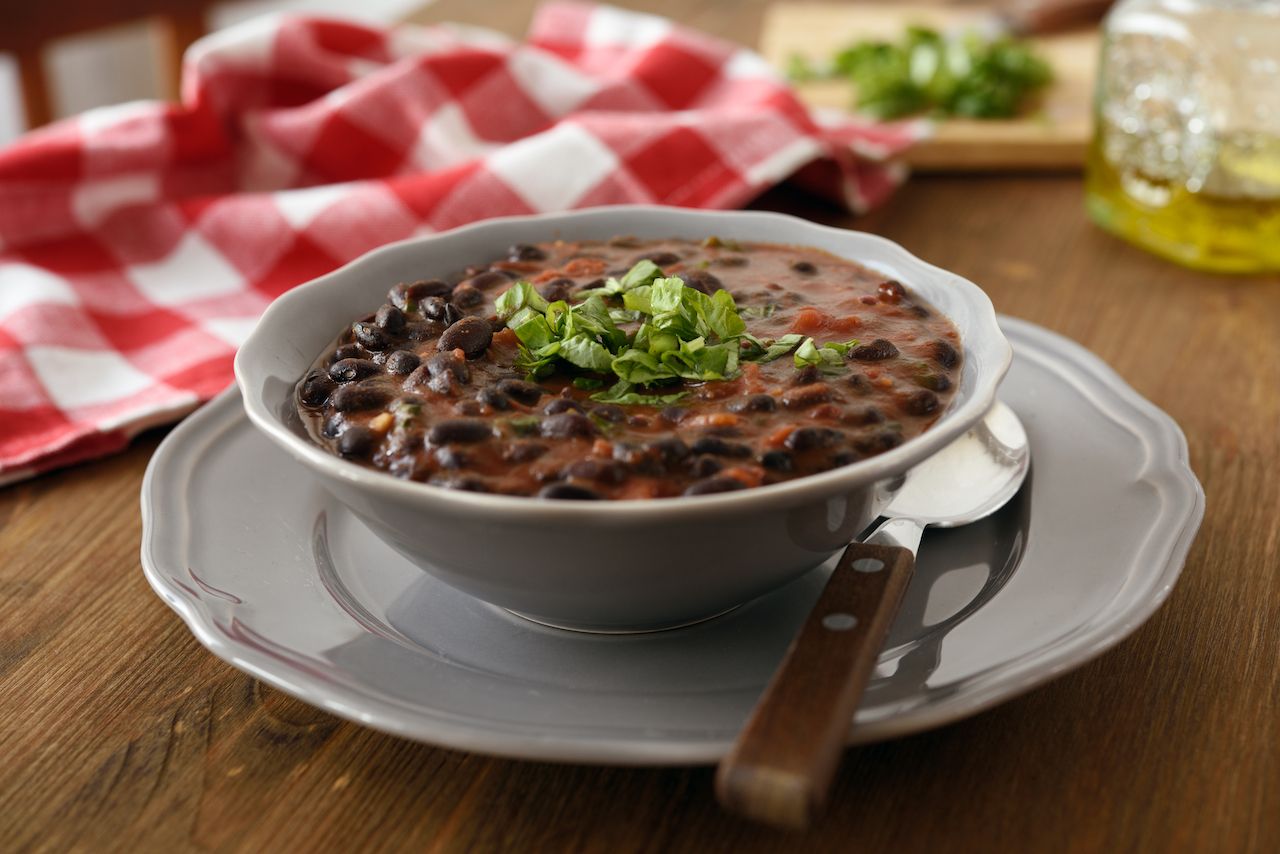 This simple soup is made with onion, garlic, black bean broth, black beans, cilantro, and egg. Variations can be found across Central America, but the protein-rich soup has found a loving home in Costa Rica.

The most traditional way to cook the eggs for the soup is to keep the egg in shell and cook it at the same time as the soup is cooked. When it’s done, take the shell off of the now hard-boiled egg and pop it right back in the soup before enjoying.

Picadillos are side dishes that are more characterized by the cooking style than the ingredients. It’s essentially a hash of finely chopped vegetables, meat, or vegetables and meat that’s served alongside tortillas (a picadillo becomes a gallito when served on a tortilla).

There’s an almost infinite number of variations, Campabadal writes in her book. Some of the most popular are made with potatoes, corn, green beans, chayote squash (also known as mirliton or choko), breadfruit, and papaya. 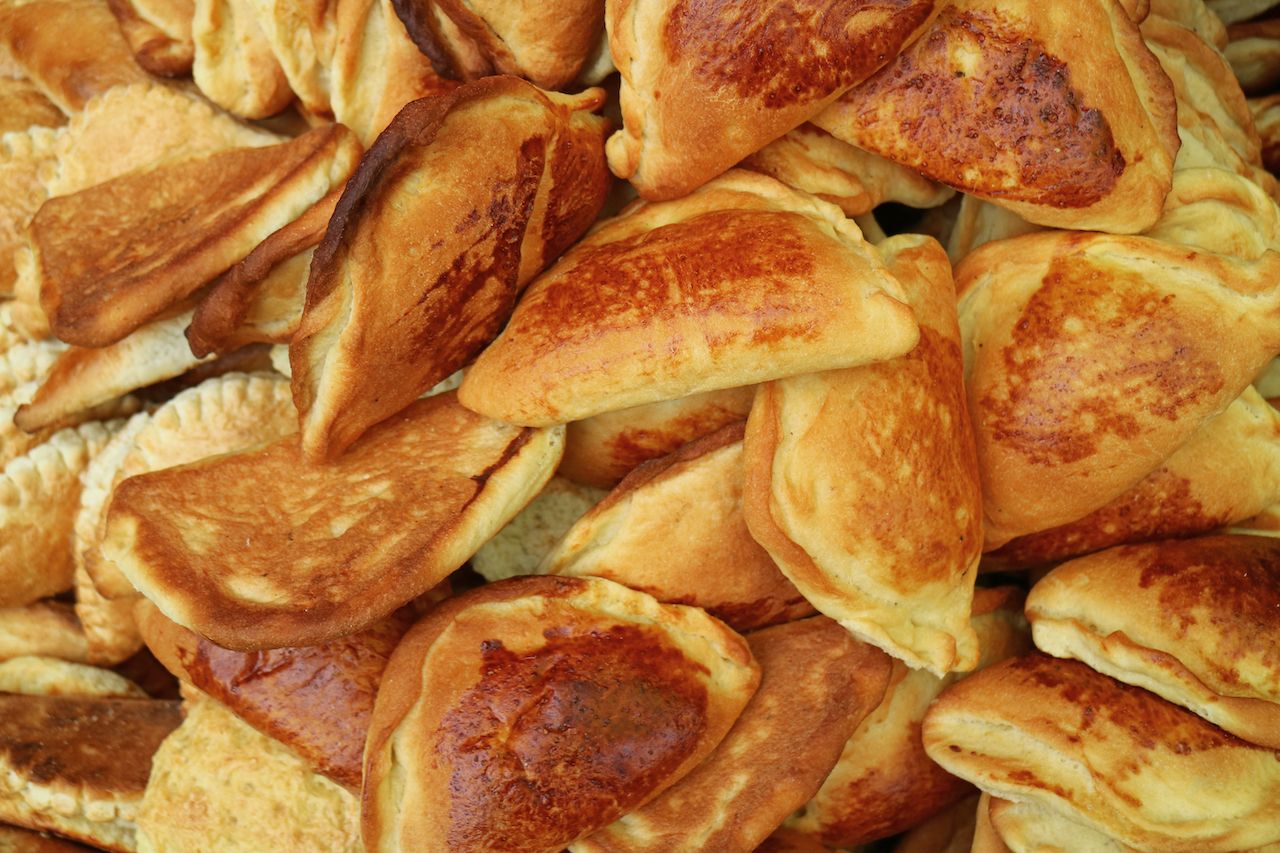 There are many types of empanadas enjoyed in Central and South American countries. These are made with wheat flour and egg dough and are filled with a locally loved fruit called chiverre. Chiverre is a type of squash grown in the Costa Rican highlands that’s sometimes called a fig leaf gourd in English, and the green-skinned squash looks somewhat like a watermelon on the outside. On the inside, chiverre looks similar to a pumpkin.

Empanaditas de chiverre are most popular, as to be expected, during the plant’s harvest season, which falls around Easter.

The direct translation of gatos — “cats” — doesn’t make a whole lot of sense if you’re unfamiliar with this small Costa Rican treat. When it comes to food, gatos are small, jelly-filled cakes with fluffy dough that are sprinkled with sugar. Gatos are popular at neighborhood bakeries.

One legend Campabadal writes about in her book states that the inspiration behind the name comes from a French baker in Cartago, which is a city near San José. The baker was known for the dessert and, allegedly, for offering people his cats (gateaux in French); the hispanicized version of the word came to represent the cakes instead of the cats. 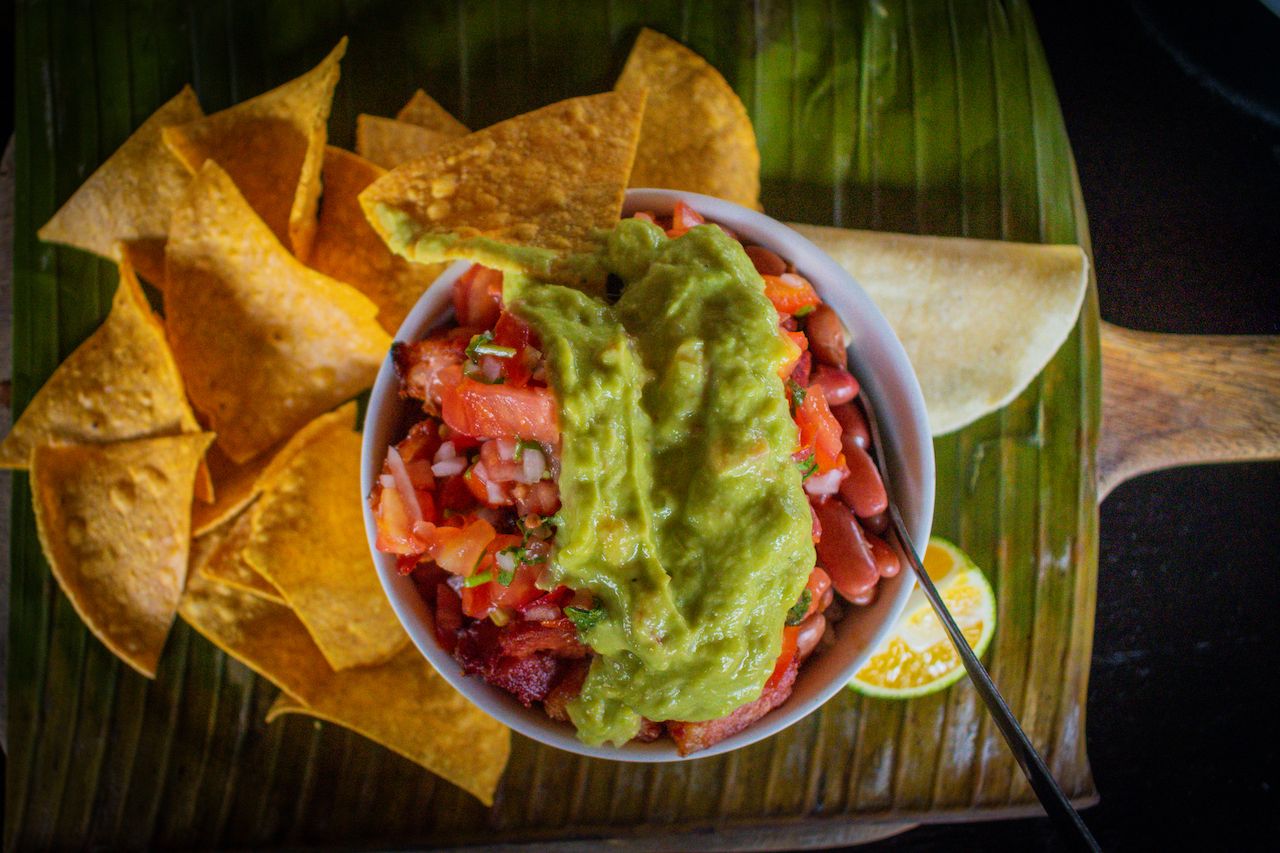 Chifrijo gets its name from its ingredients: chicharróns (fried pork skin) and frijoles (beans). Chifrijo is a popular bar snack and can be found at events around the country as well. Other than the two namesake ingredients, chifrijo can have any number of added ingredients. One popular addition is pico de gallo, which is a light salsa made with diced tomato, onion, cilantro, and lime.

As Campabadal puts in her book, “It goes down best with a cold beer.”

Enyucados are yuca croquettes that make for a satisfying snack served with pico de gallo or another salsa. Yuca, which is also called cassava or manioc, is a South American root vegetable. It’s an easy swap in for potatoes, and croquettes are no exception. Enyucados are made with mashed yuca, onion, garlic, and other spices, and a meat, egg, or vegetable filling of your choice. The croquette is fried until the outside is crispy. 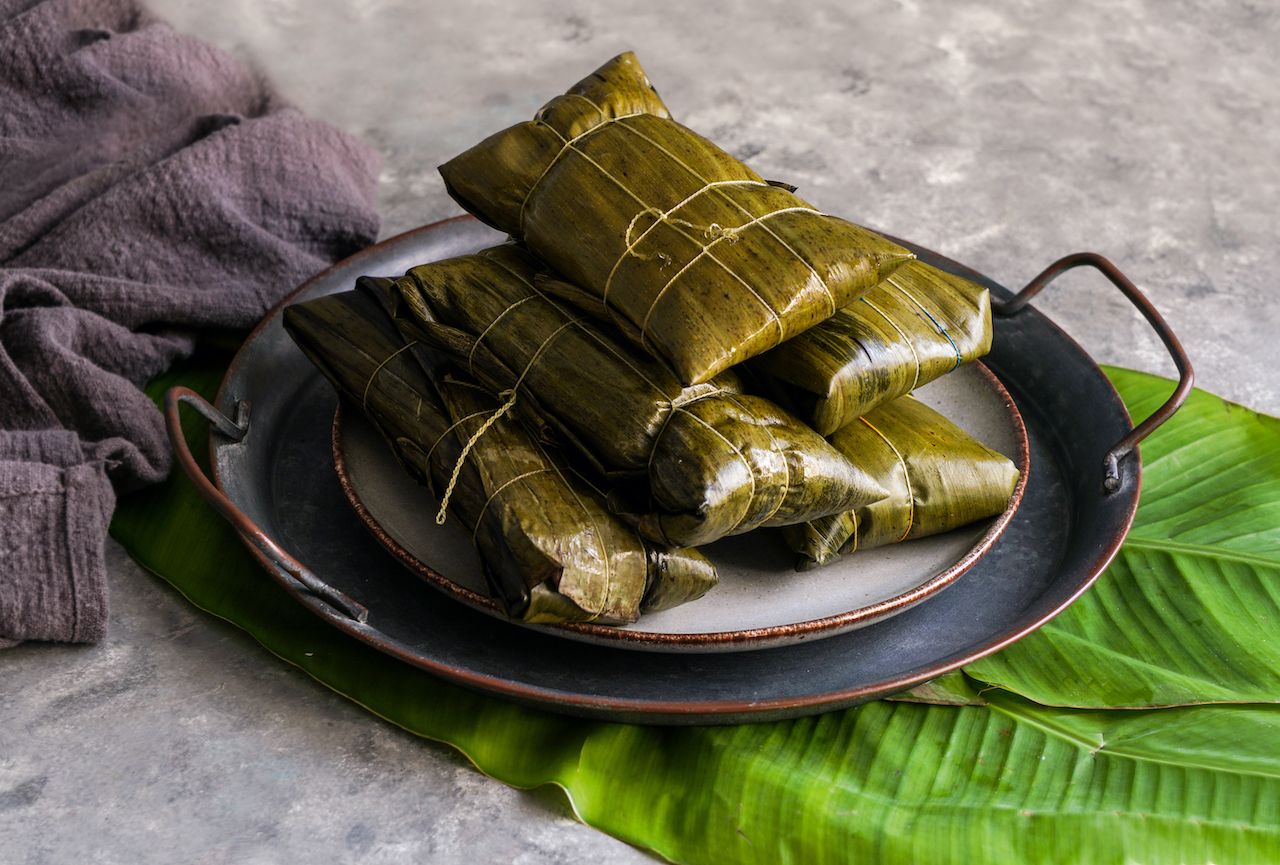 Costa Rican tamales are similar to the tamales found in Mexico. Each tamale is made with a mashed corn base that’s filled with meat, cheese, or vegetables. The main difference between the tamales in Costa Rica and those from farther north is that Costa Rica’s tamales are wrapped in a banana leaf rather than a corn husk. Tamales can be found year-round, but they’re especially popular around the holidays and family gatherings.

This simple yet satisfying beef soup is made with rump roast, cilantro, peppers, onion, celery, garlic, plantains, corn, squash, potatoes, and yucca — though the exact ingredients vary depending on who is making it. It’s a restaurant staple, and the flavors only get better the longer it’s cooked. 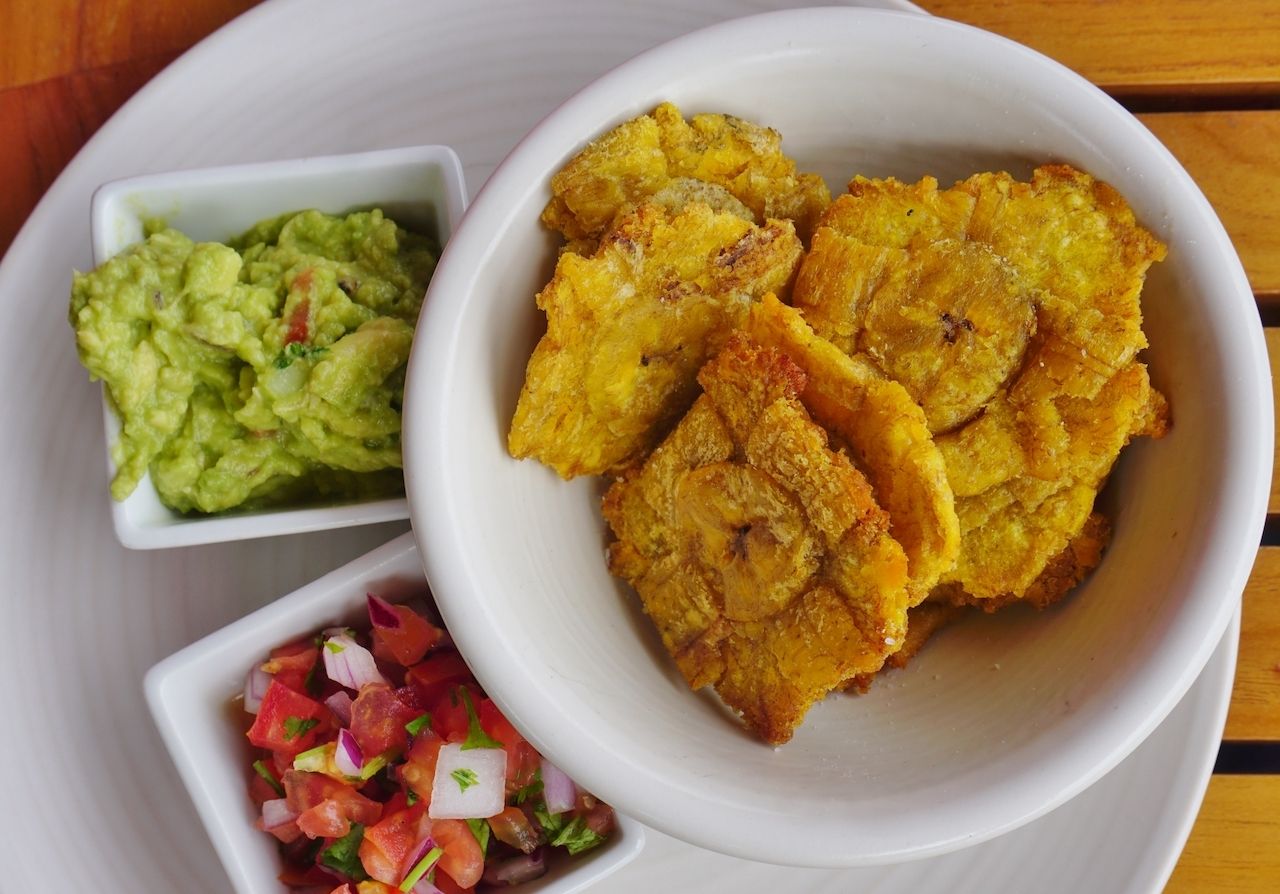 Patacones are fried plantains, which are similar to bananas, but these are cooked before eating. Patacones are green plantains sliced into thick pieces, salted, and double fried. They’re a popular snack that can be found just about everywhere in Costa Rica, and it’s hard to eat just a couple.

WellnessHow to bring Costa Rica’s ‘pura vida’ attitude into your life
Tagged
Food + Drink Costa Rica
What did you think of this story?
Meh
Good
Awesome

10 of the most iconic regional sandwiches to try across the United States
Searching for the best Mexican food in Texas? You need to visit El Paso
The difference between butter chicken and chicken tikka masala
New Jersey sandwiches are an art form. These are the 9 sandwiches to try.
This neighborhood in New Jersey has some of the best Portuguese food in the country

Costa Rica is giving away 15 free trips in 2021, and you can nominate your loved ones