If there is one undeniable truth, it’s that humans around the world love chocolate. But like so many of the foods people love and consume on a regular basis, chocolate as we know it is threatened by climate change. That could mean price hikes in the short term or completely new chocolate regions in the long term. While it’s not fully understood what the future holds, one thing is clear: The chocolate in our candy, cakes, and confections — and, more importantly, the people who make it — will face a series of climate-related challenges in the near future.

Chocolate is made from cocoa, which are the dried and fermented seeds from the cacao tree. The trees are finicky and mostly grow in a humid 20-degree band to the north and south of the equator. This means nearly all cocoa beans come from a relatively small number of countries. Farmers in Ghana, Côte d’Ivoire, and other countries in West Africa grow around 70 percent of the world’s cacao. Central and South America, where the cacao plant originates, is home to important growing regions in Brazil, Ecuador, Mexico, and Peru. Cacao is also grown in Indonesia.

All of these places are susceptible to the ravages of climate change. One study found that, while climate change’s impact is global, tropical equatorial regions with little yearly temperature variability will be hit the quickest and the hardest. A 2011 report from the International Center for Tropical Agriculture predicted that cacao suitability in West Africa could start to decline as soon as 2030. Scientists are still figuring out what that means for where commercial cacao trees will grow as temperatures rise. 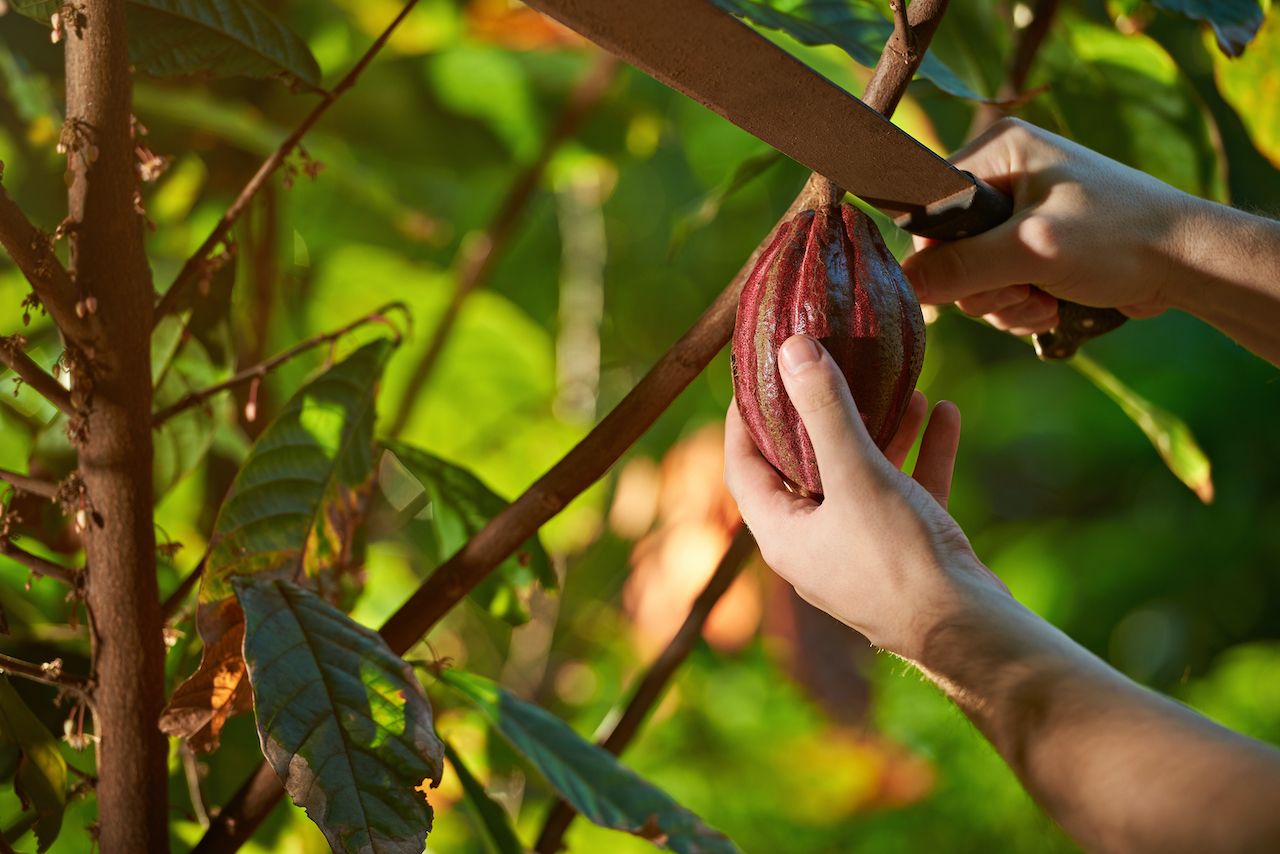 ClimateAi, a company focused on improving climate resilience in agriculture, uses data sets and artificial intelligence-based forecasting technology to help agriculture businesses plan ahead. Using its tools and agricultural surveys from the Food and Agriculture Organization, it mapped the current and future climate in cacao growing regions for Matador Network. 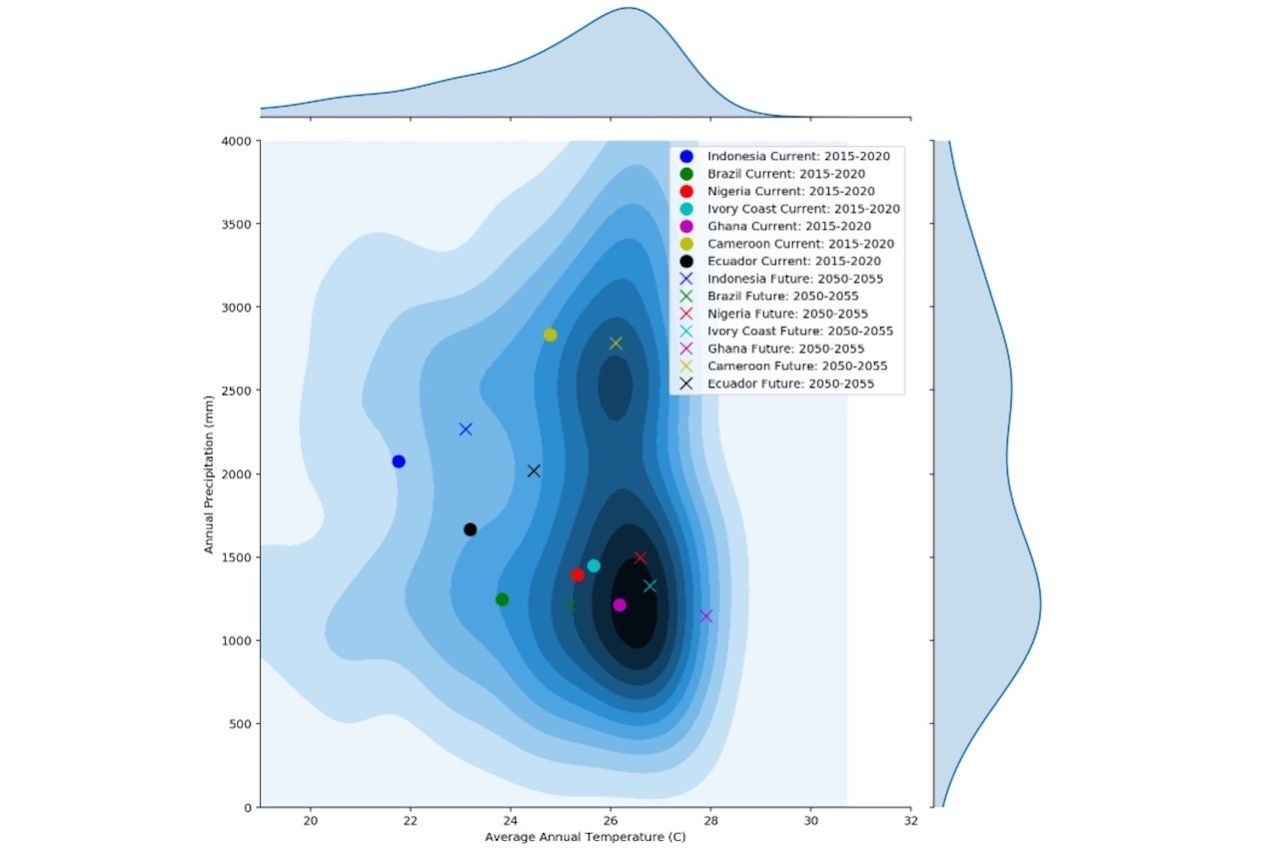 “Ghana’s climate is shifting from basically the center of the high yielding acres to the fringe,” says Anthony Atlas, head of product and growth at ClimateAi. “And while a two-degree increase in average temperature might not sound like a lot, it’s huge.”

The average temperature includes all months and both night and day. The summer months could be brutal. Summer days could pass the temperature threshold of cacao plants, and the likelihood of an extended heat wave will multiply, Atlas says. This could cause large amounts of the current cacao plants to dry out and die. It could also impact the surrounding foliage that can’t survive increased heat, which in turn would lead to soil erosion around the roots of cacao plants and make them more vulnerable to disease and pests.

On the other end of the spectrum, some cacao-growing countries could see a more favorable climate in the future. Nigeria and Brazil have the potential to become the sweet spot for high yielding farms. It’s not entirely a reason for celebration — when crop viability increases, the land devoted to those crops increases as well. Deforestation is one problem that could arise as farmers clear land for cacao plantations. Another problem that cacao regions could see is a lack of farming investment and education in places that hadn’t previously grown cacao. Rapid growth could force farmers who were working with other crops to transition quickly without the opportunity to learn the best climate mitigation practices or build out the necessary infrastructure.

ClimateAi also looked at another metric: places that aren’t particularly suited or noted for cacao today but that could have the ideal climate in 40 years due to an increase in temperature, rainfall, or both. This includes parts of northern Brazil and Guyana, as well as regions farther from the equator than cacao is typically grown today. 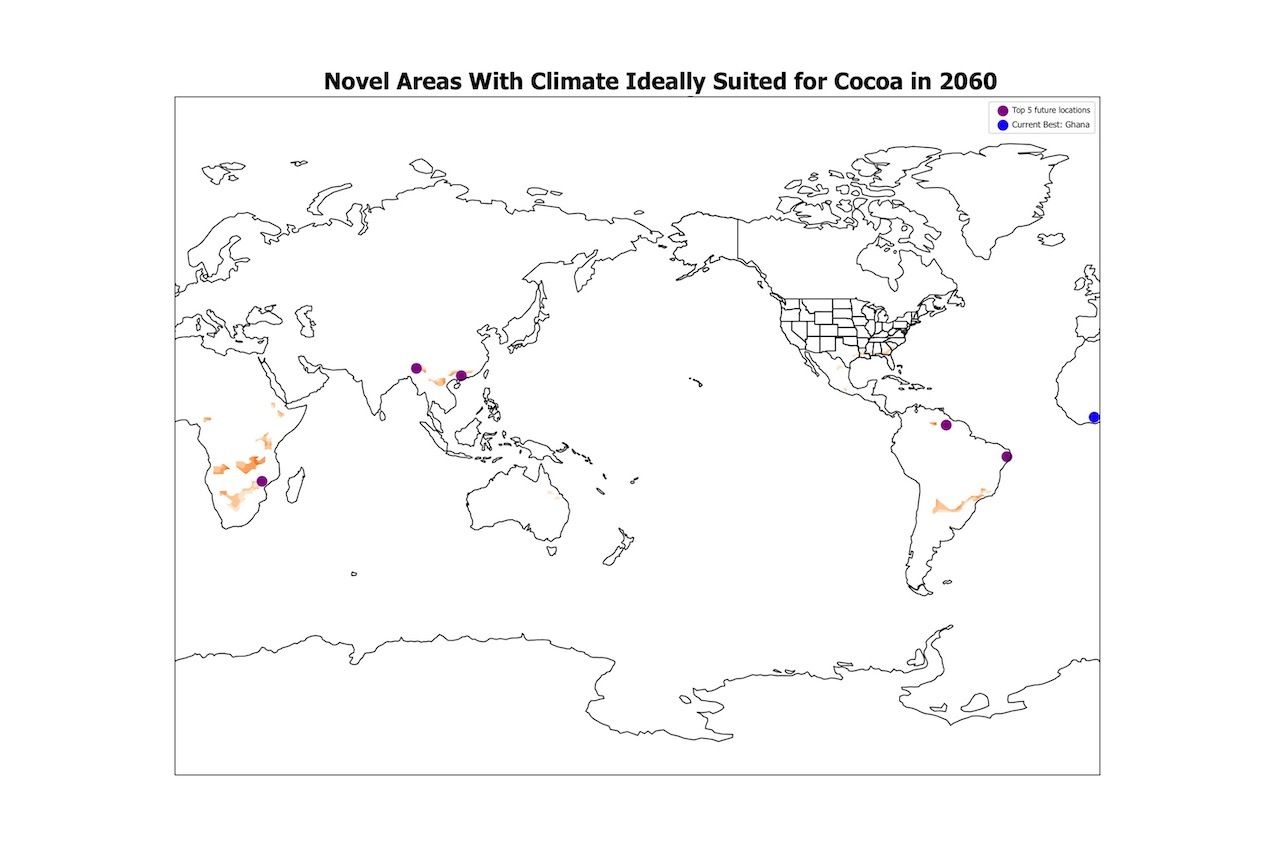 The biggest climate challenge facing cacao growing regions isn’t the heat, it’s the amount of water available. The National Oceanic and Atmospheric Administration notes that increased evapotranspiration (the combination of evaporation from the soil and transpiration from plants) is what will most hurt cacao plants. That’s why the most impacted regions are where the temperature rises without an increase in rainfall. A study published by the Intergovernmental Panel on Climate Change found that West African cacao farms would need to move higher in elevation toward protected mountainous forests in order to find a suitable growing climate with enough rainfall. It also found that 90 percent of cacao producing locations could be less suitable by 2050. This won’t happen in a bubble. As land at higher elevations are subjected to deforestation, the wild plants and animals in the area — many of which are already vulnerable — will be further threatened as the ecosystem is disrupted. 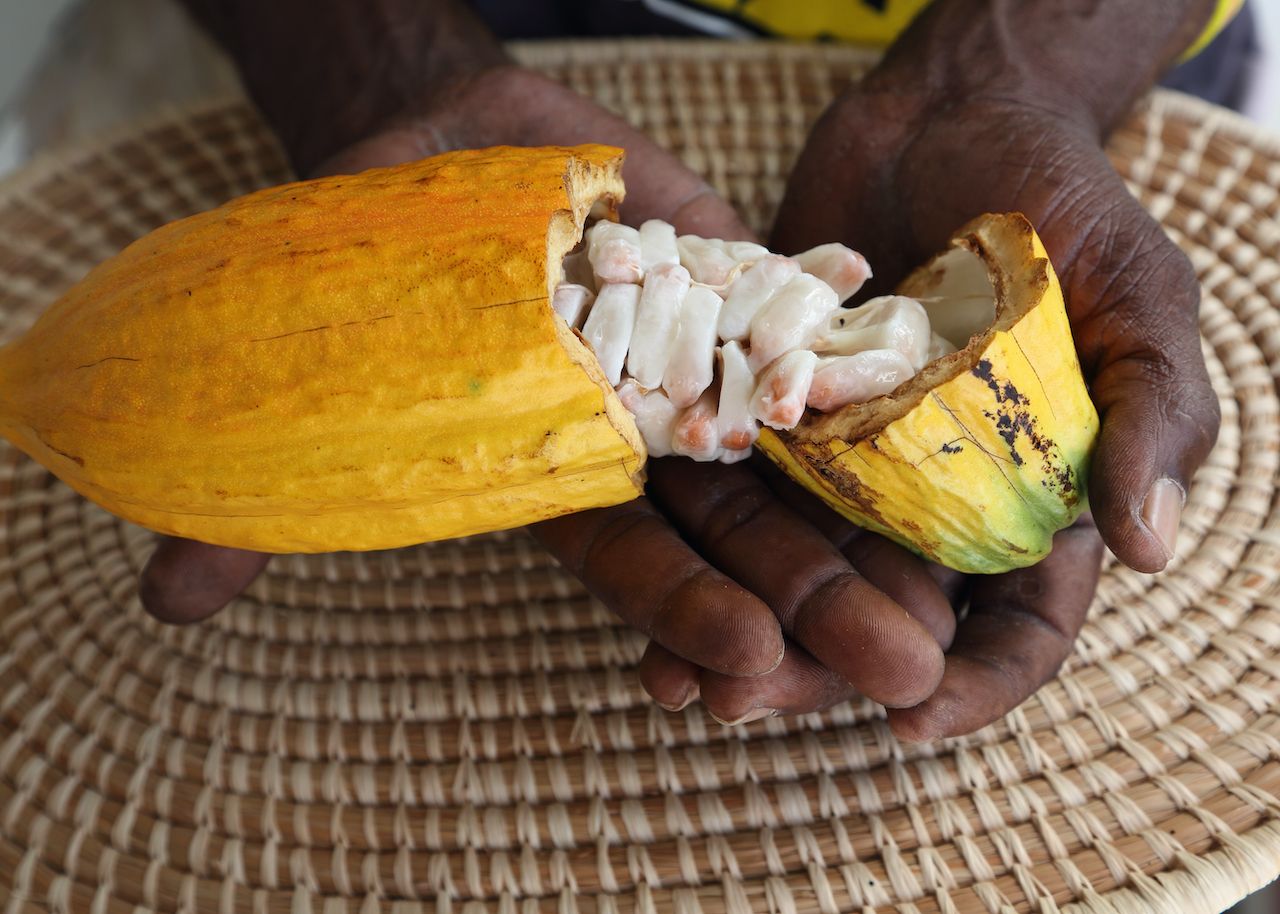 Rainfall is only one way for a region to get enough water. Improved crops and agriculture techniques could help farmers.

“Public and private partners have joined together to work with farmers on various initiatives to support mixed agroforestry systems to help diversify farmer incomes and protect fragile soils,” says Bill Guyton, an agricultural economist who helped form the World Cocoa Foundation and who is the executive director of the Fine Chocolate Industry Association. “Research is underway for more drought resistant cocoa at research centers in different countries.”

Some researchers also see irrigation as a possible solution.

“The best way to prepare is to introduce irrigation, especially drip irrigation or micro-sprinklers for the dry period,” Eduardo Tugendhat, a supply chain expert with a focus on cocoa and palm oil and the director of thought leadership at Palladium, says. “This would also more than double yields, but the problem is that most farmers are extremely poor and cannot afford the technology. The other way of adopting has been to move into new jungle areas (e.g., national parks) and clearing new farms that are somewhat higher and wetter (at least initially).”

Unfair wages is a known problem in the chocolate supply chain — one that’s only been exacerbated by the global pandemic. It’s impossible to confront the climate change problem without first and foremost confronting the inequality between the large chocolate corporations and the people who are paid substandard wages for their crops. In the worst-case scenario, farmers and millions of children are forced to work cacao fields for less than $1 a day. Underpaid, and in some cases disenfranchised, workers don’t have the resources to farm sustainably.

“Without a living wage to feed their families, they are much more susceptible to climate change because they don’t have the capacity to plan long-term,” says Mel Bandler, a partnerships manager at Fair Trade USA. “Since the sharp price dips in 2017, farmers have been struggling overall to produce sustainably. If we take Ivory Coast (the world’s largest producer by tonnes of production) as an example, 80 to 90 percent of primary forest has been lost since the 1960s, 75 percent of which is due to agricultural (cocoa) expansion. Furthermore, there is not money to invest in new trees or agroforestry, so the overall ecosystem is very susceptible should there be sudden climatic shifts.”

Investing in education is one way to increase yields and improve the viability of farms for both people and the climate. Many farms practice monoculture, a farming method that directs all resources toward growing a single crop, which makes the economic and land viability problems worse. Other types of crops like cashews and rubber trees can be grown in the same regions as cacao plants, but those too are susceptible to climate change. Coffee grows in similar areas, but also faces just as much of an uphill battle as chocolate.

“The reality is that the cocoa supply system worldwide is not sustainable because it is built on farmers in extreme poverty,” Tugendhat says. “This cannot be addressed solely as a climate change problem. It requires systemic transformation that allows farmers to gain access to technology and the financing needed to expand and intensify their farms in climate-smart ways, and have the profitability to be able to pay back the financing.”

Empowering people at the start of the supply chain improves the final product for the workers, the consumers, and the environment. Adapting to the changing climate takes investment that’s not currently being put into the communities that grow cacao trees.

“Unfortunately, this comes at a cost that most companies and consumers aren’t willing to pay,” Bandler says. “It is important to vote with our dollars and support companies that are empowering cacao farmer’s well-being, and in turn we can mitigate climate change.”

Coffee + TeaHow Climate Change Will Drastically Change Coffee as We Know It
Tagged
Dessert Sustainability
What did you think of this story?
Meh
Good
Awesome