Buenos Aires is an international hub for excellent cafes and coffee culture. The city is famous for its timeless cafes that have been serving coffee and cakes to Porteños (locals of Buenos Aires) since the mid-19th century. These cafes rival the best establishments in Vienna or Paris. What many people don’t know is that the city is also home to a community of people who love comic books. Several comic book cafes where those people can gather to read illustrated stories have sprung up around Buenos Aires.

In Buenos Aires’ comic book cafes, baristas and store owners team up to bring you an experience that blends the city’s famous cafe culture with pop-culture. At these cozy spots, you could easily find yourself spending hours sipping a super hero-themed cappuccino while reading your favorite manga or unpacking a new collectible. Many of these cafes are inspired by Japanese cafe culture, and feature not just traditional comics on their shelves, but anime, manga, and graphic novels.

With Marvel movies at their absolute peak of popularity, Star Trek and Star Wars both receiving the reboot treatment, and a slew of DC movies upcoming in theaters, there’s no better time to explore the wide and wondrous world of comic books and nerd culture. You’d be lucky to do it in Buenos Aires, a city full of wondrous architecture and history.

Take a break from exploring the Plaza de Mayo, the iconic Casa Rosada palace, and the glamorous Teatro Colón opera house, to relax at one of these comic book cafes with your favorite edition and a cup of strong coffee. 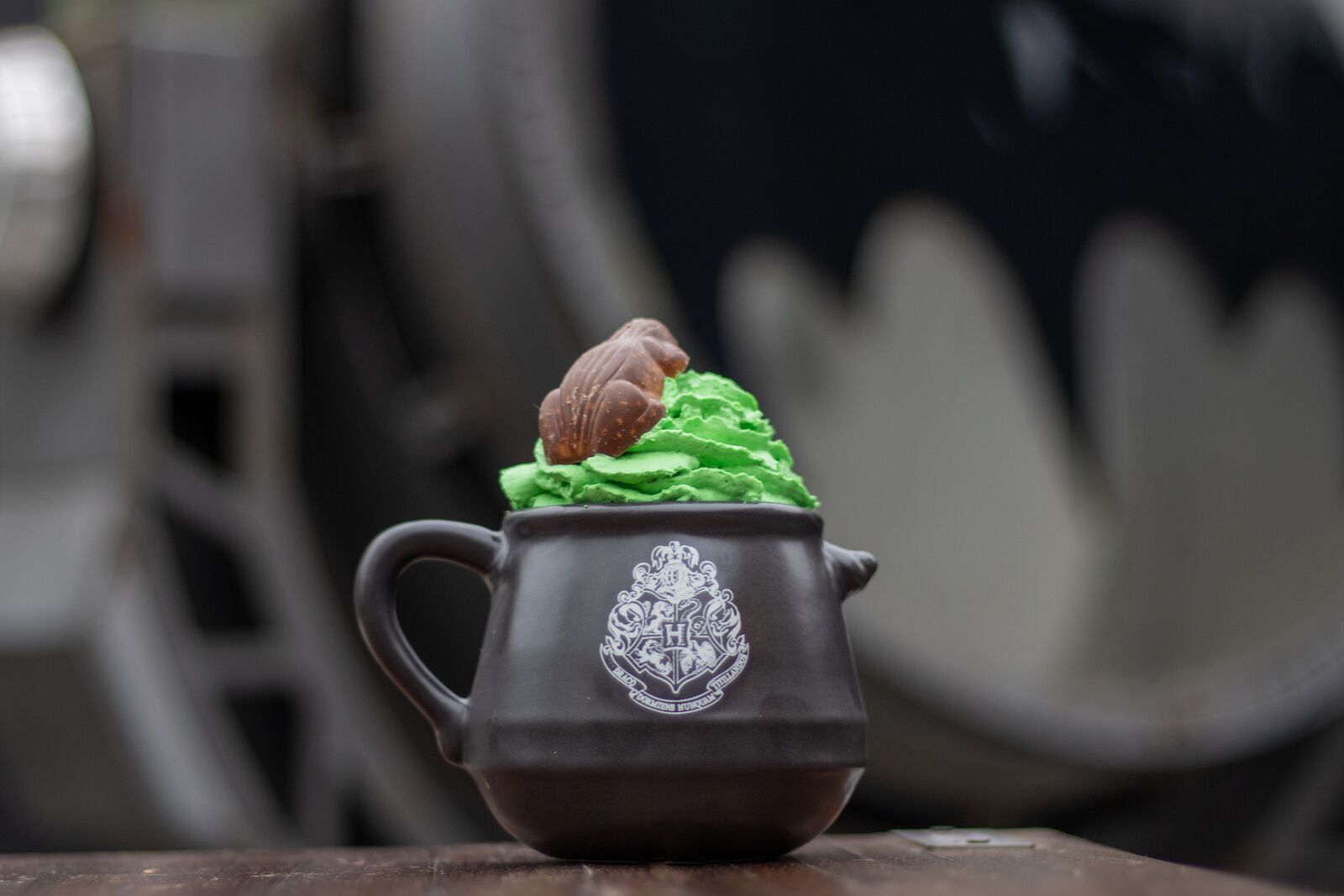 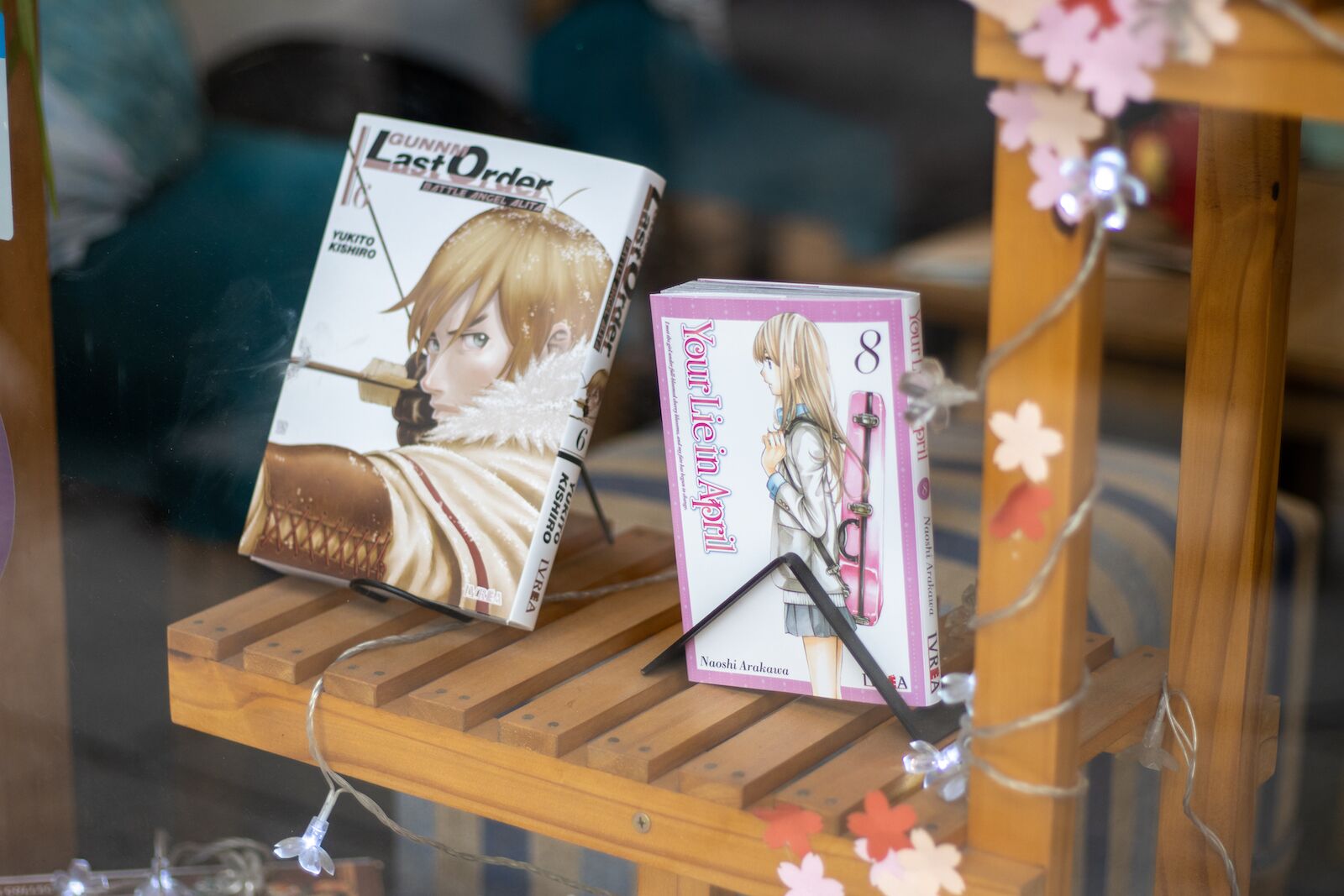 Tucked in the vibrant Palermo neighborhood is Ao Kuma Cafe. Inside, customers can order specialty coffees and treats designed like popular anime characters. Stacked along the cafe’s walls are volumes of manga, all translated into Spanish.

What also attracts customers is Ao Kuma’s welcoming atmosphere. Fans of coffees, manga comics, and Japanese cuisine line up outside Ao Kuma daily, patiently waiting to get a table. Once you’re inside, you’ll realize why Ao Kuma has become one of Palermo’s most popular hangout spots. 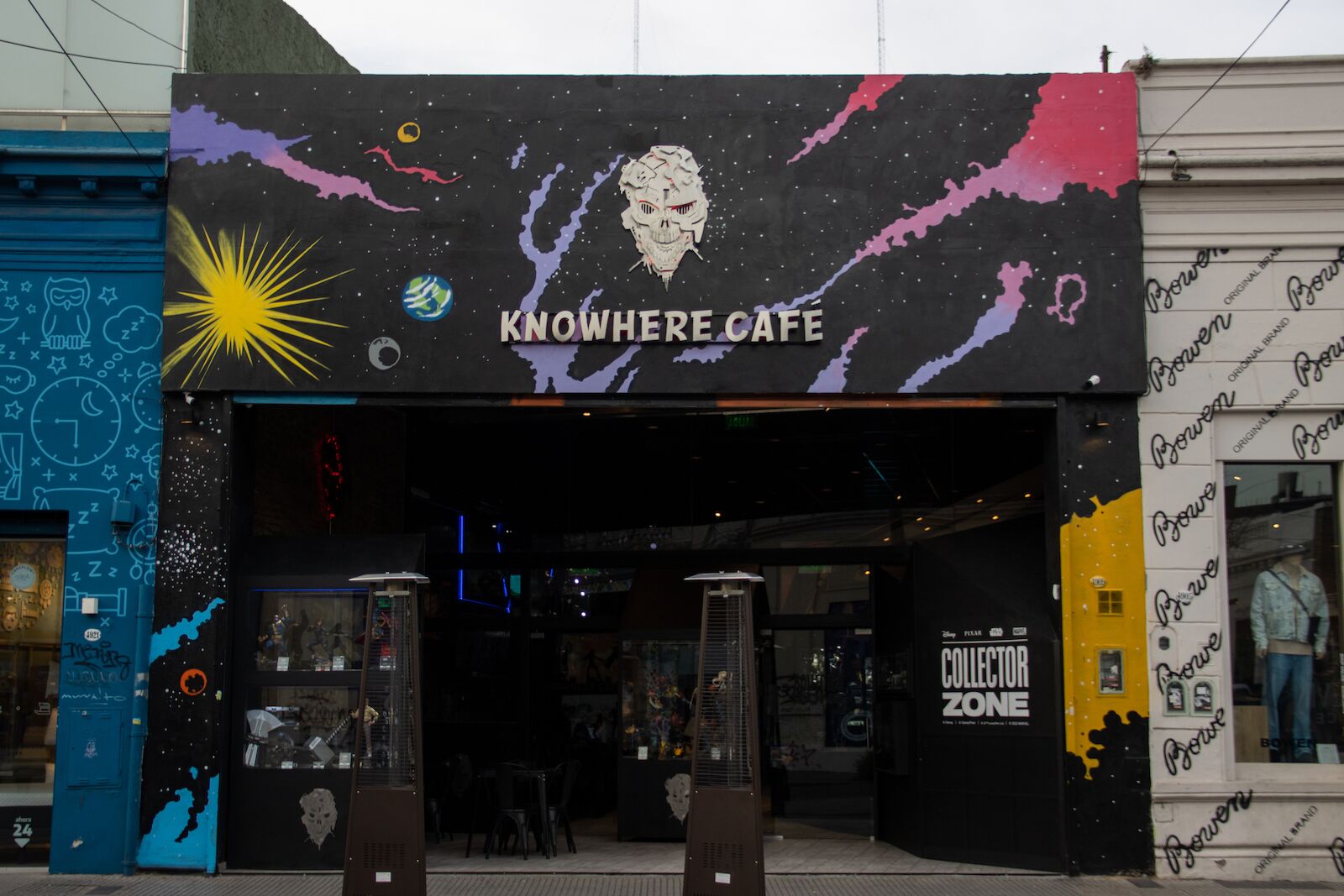 Both Knowhere Collectibles cafes are located in the Palermo neighborhood, and are full of life-sized collectable figures from the MCU and DC Universe. Fans of comic and pop-culture characters can come to purchase, unbox, and show off their collectables. The cafes also host several events around the year which celebrate movie releases by serving themed drinks and other promotions to attract comic book enthusiasts. 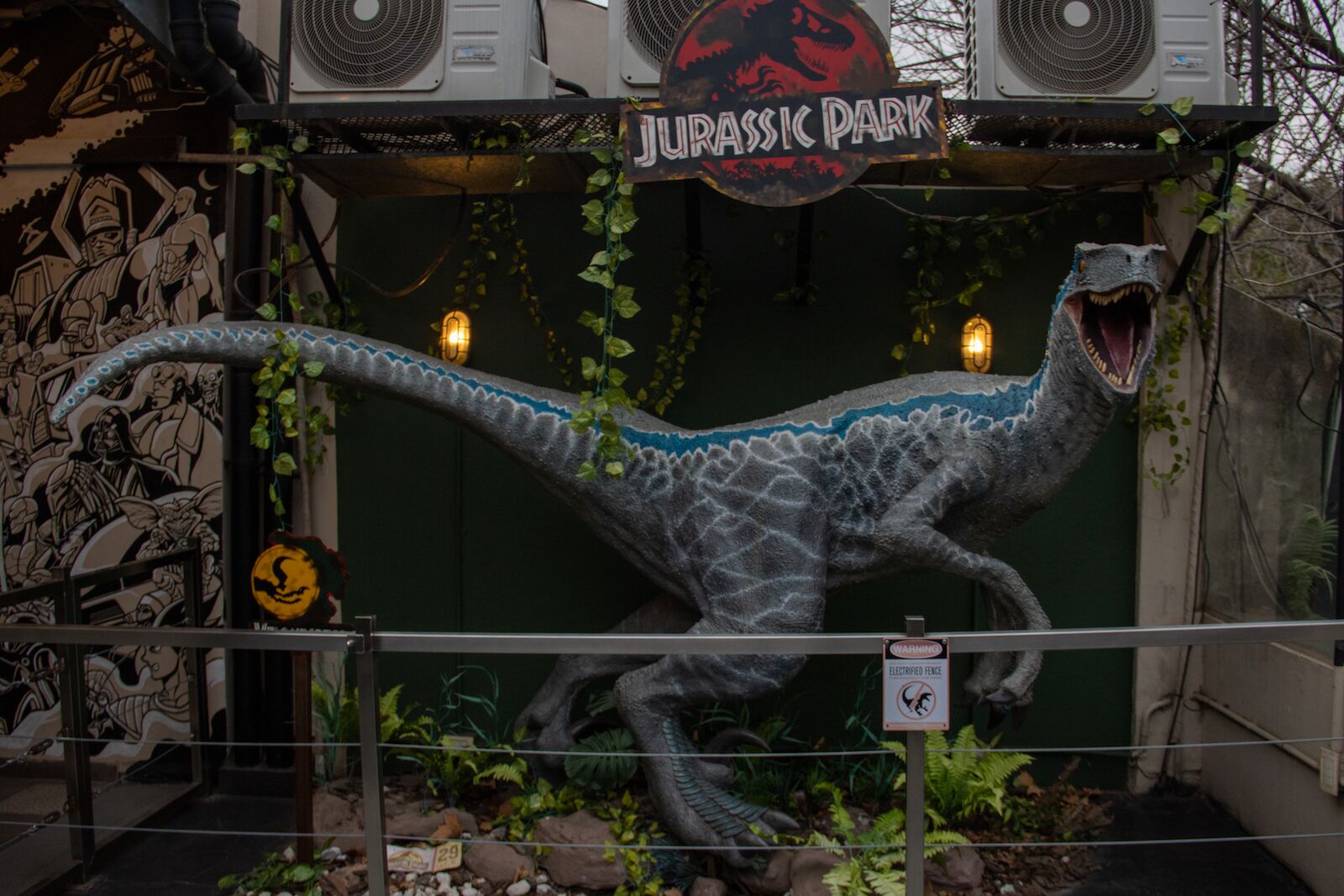 Originally a collectables store, as its name might suggest, Knowhere Collectibles grew into a staple of the city’s cafe scene. Nowhere else can you enjoy a cortado (espresso with milk) and a fluffy pastry while sitting next to a towering Jurassic Park velociraptor and a Boba Fett statue. Besides their two cafes, Knowhere Collectibles also has a superhero themed sit-down restaurant called Knowhere Gallery that serves food and cocktails. 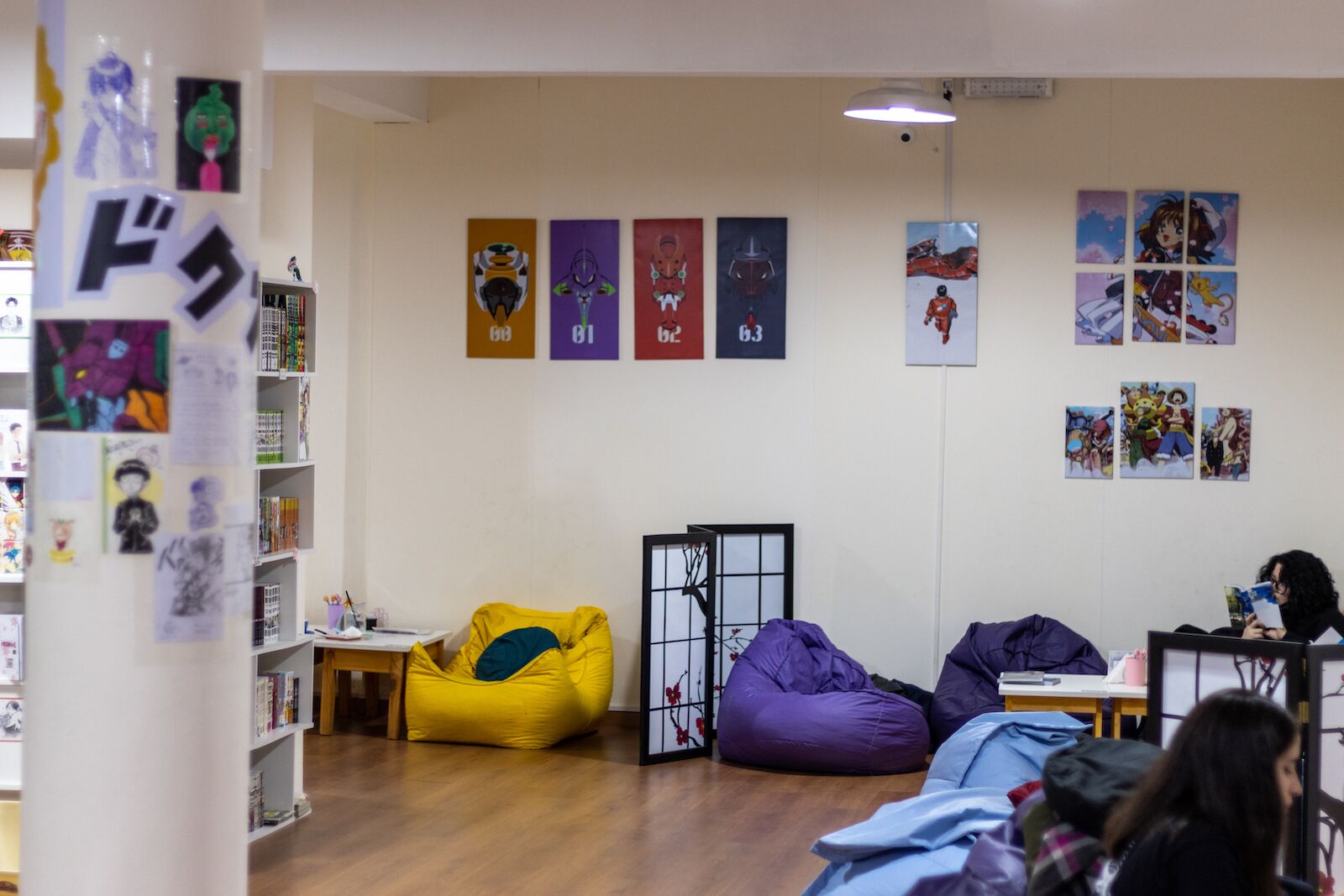 The latest manga cafe to open during the pandemic in Buenos Aires is Momo Manga Cafe. The cafe is hidden ‌on the second floor of an office building in the neighborhood of San Nicolás. You need reservations to grab a comfy bean bag seat in their cafe but customers can drop in anytime to purchase the shop’s manga-themed merchandise.

Momo Manga teamed up with several small companies and local artists to sell its anime and manga themed merchandise inside their cafe. Once you reserve your table, you can also enjoy their wonderful menu of teas, coffees, and food, all served in a cozy environment. Every weekend, Momo Manga serves a rotating menu of traditional Japanese pastries.

Momo Manga is easy to miss. Outside there are currently no signs other than plastered manga pictures on the windows above you and the adorable momo (peach in Japanese) icon. To get inside, ‌ring the doorbell and the clerk will let you in. 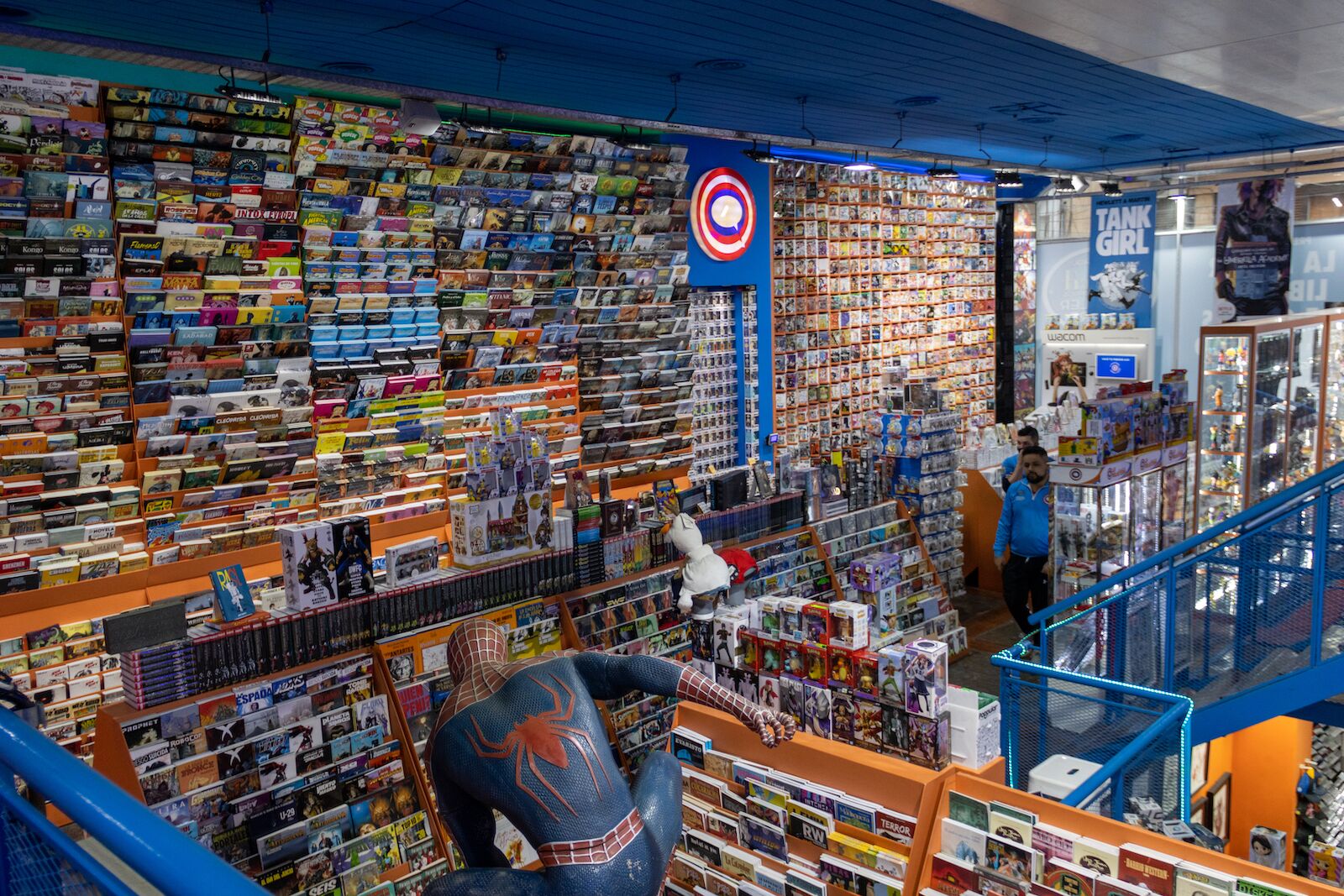 In the bustling central neighborhood of Buenos Aires, is the popular La Revisteria Comics & Coffee. Just blocks from the Galerías Pacifico mall and the city’s famous performing arts centers, the cafe and comic book store is one of the city’s largest comic book cafes. The company built the cafe following a wave of interest in comic cafes in the city.

La Revisteria has three floors with an attentive team of comic experts on hand to answer ‌questions. Fans of everything from Marvel to Naruto can find their favorite comic books stacked high and perfectly organized in neat rows on towering shelves. Like many bookstores in the city, their collections are stacked so high that employees need to use ladders to access their full catalog. 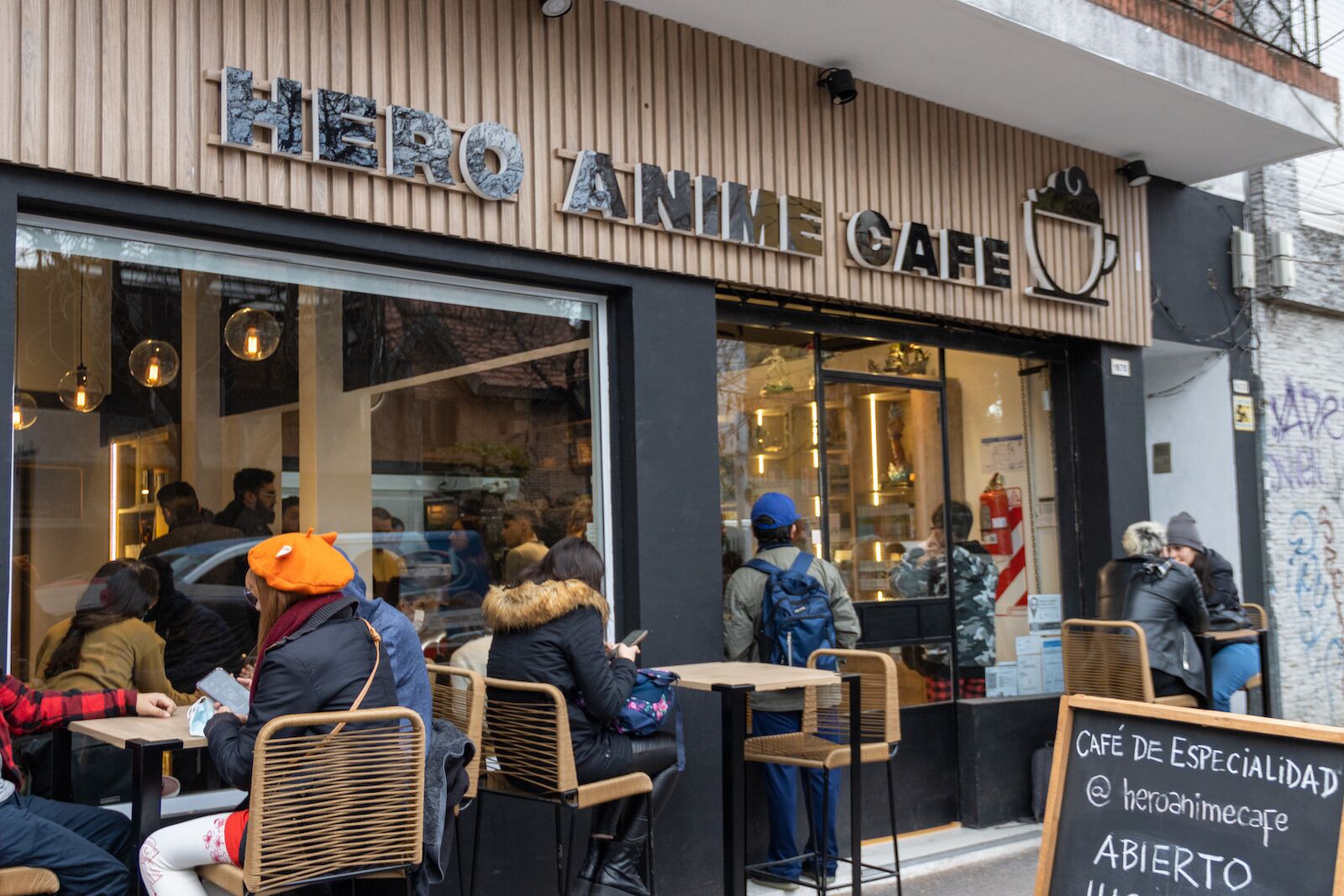 The Palermo neighborhood has a monopoly on comic cafes and Hero Anime is one of the most beloved. For Porteño manga fans, this cafe has everything: great coffee drinks and snacks, friendly and attentive staff, and an ambiance that was created by manga fans for manga fans. Characters from Dragon Ball Z, One Piece, and many others adorn the walls. If you’re new to manga, don’t worry. Their knowledgeable baristas will eagerly help you discover your new favorite manga to read with your coffee. 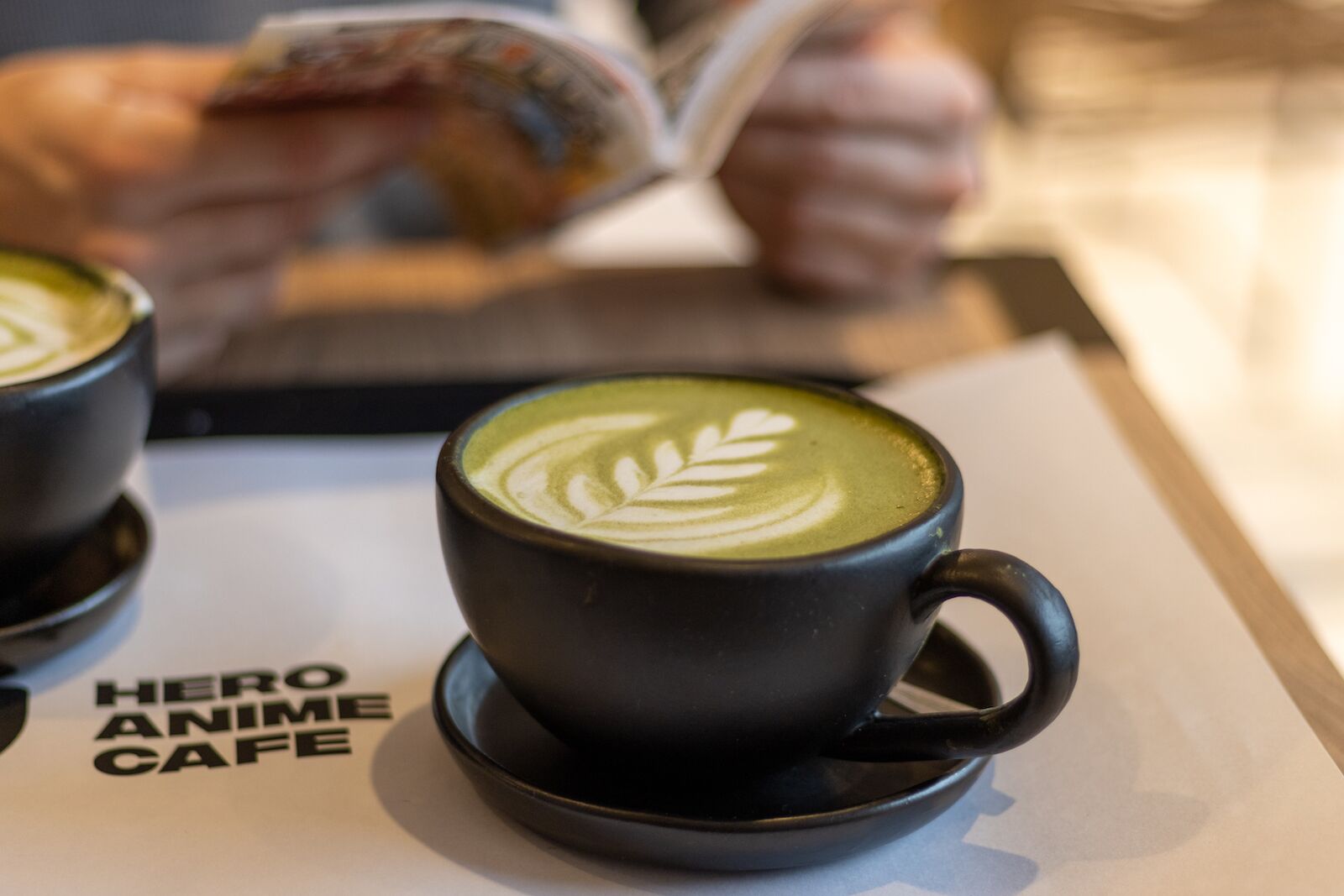 Hero Anime opened on June 4, 2022 by two friends and colleagues who wanted to create a place for people to enjoy manga while drinking coffee. Since their opening, Hero Anime has become one of the most popular cafes in Palermo. You don’t need reservations for Hero Anime Cafe, but because of their popularity, it’s best to get in early so you can find a seat. 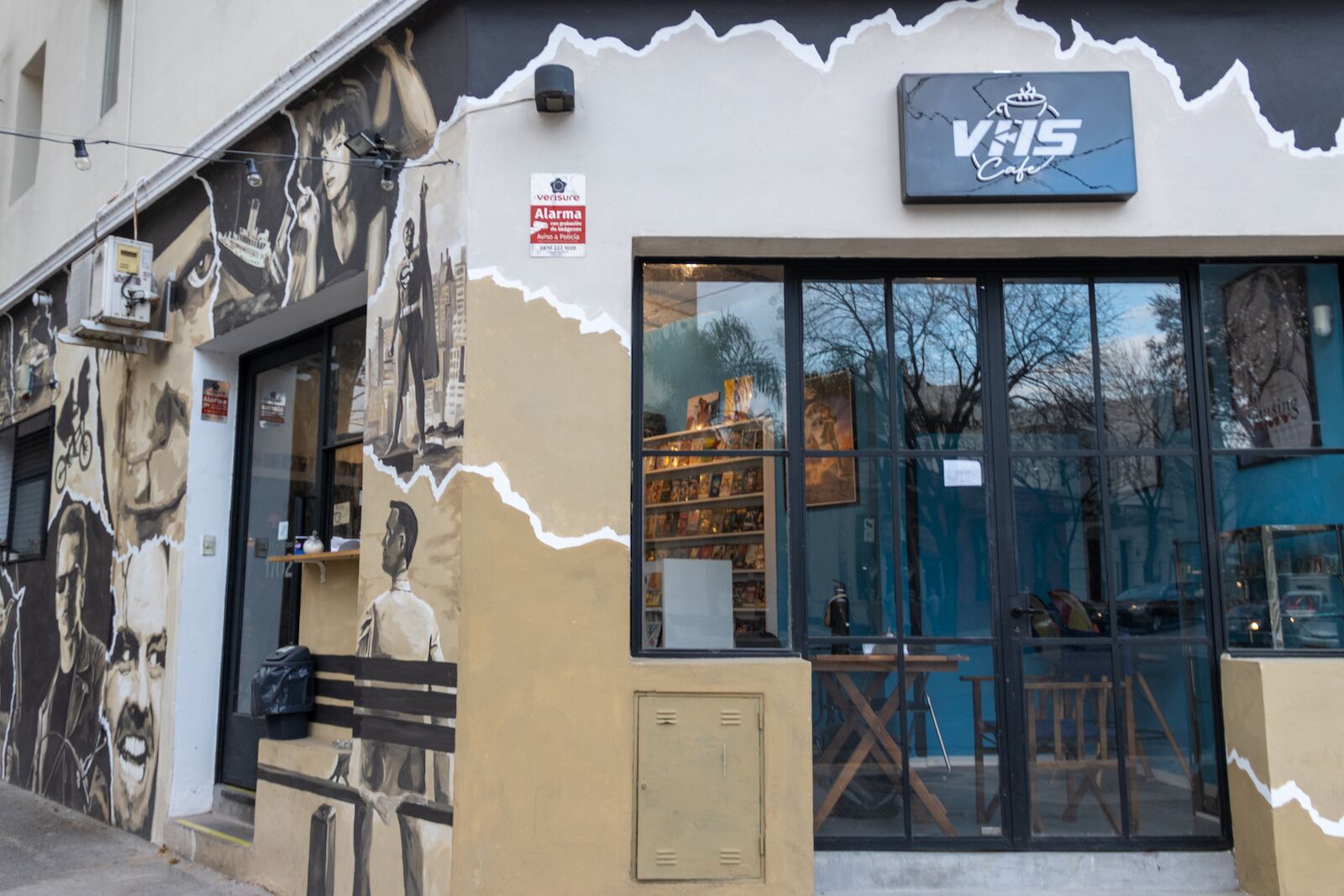 Although they don’t have comics, VHS Café in Palermo is a must-visit destination for pop culture aficionados. Nostalgic VHS tapes and movie posters from the 80s and 90s cover the walls, harkening back to old-school VHS stores and Blockbuster video rental stores. You can browse through famous Hollywood classics like Die Hard and Ghost on VHS while enjoying their delicious home-brewed coffee and munching on alfajor cookies. 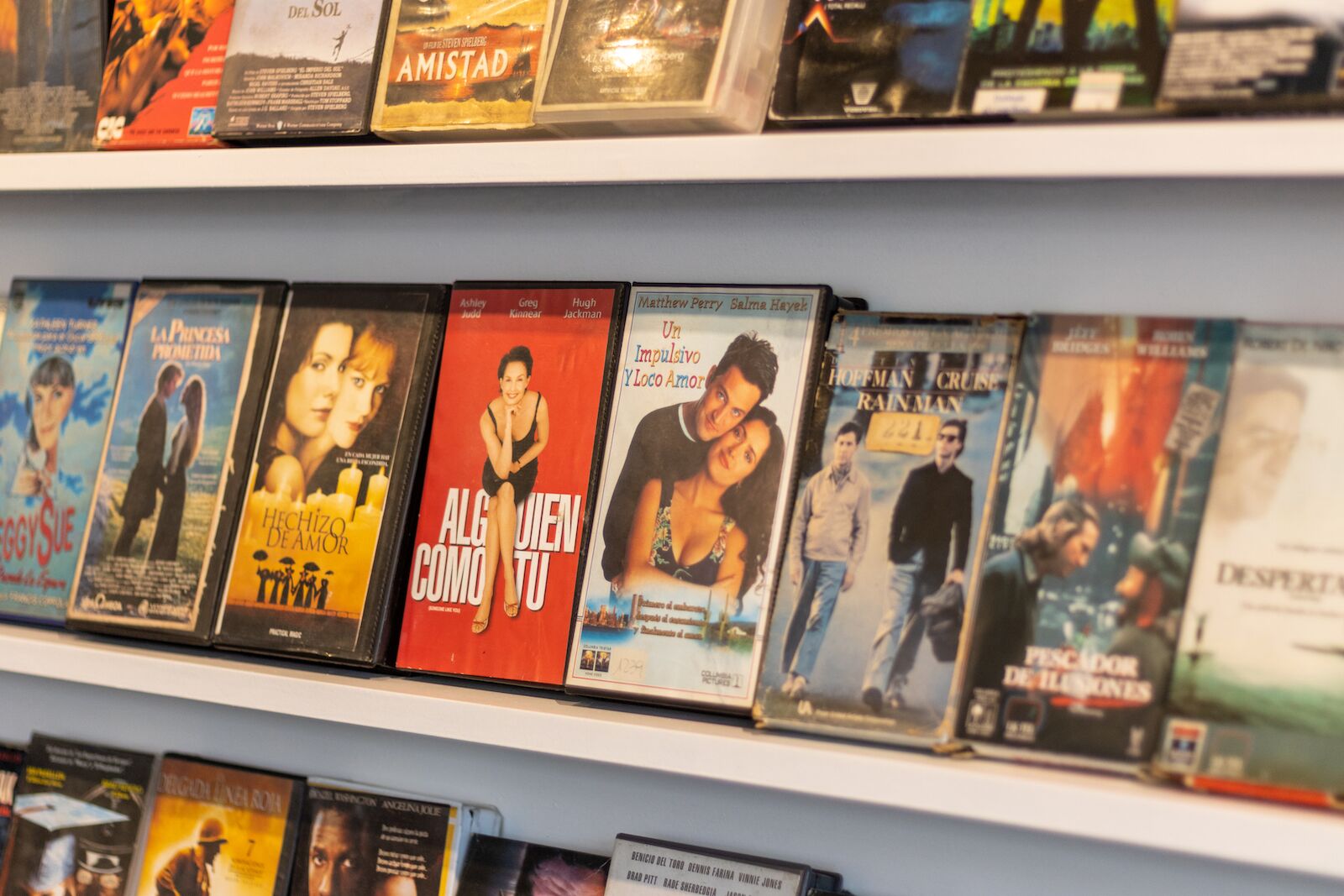 VHS Café is made extra special by its warm atmosphere and friendly baristas. The cafe has become a local hang out spot where neighbors come to grab coffee and share tables with movie fans and coffee aficionados. 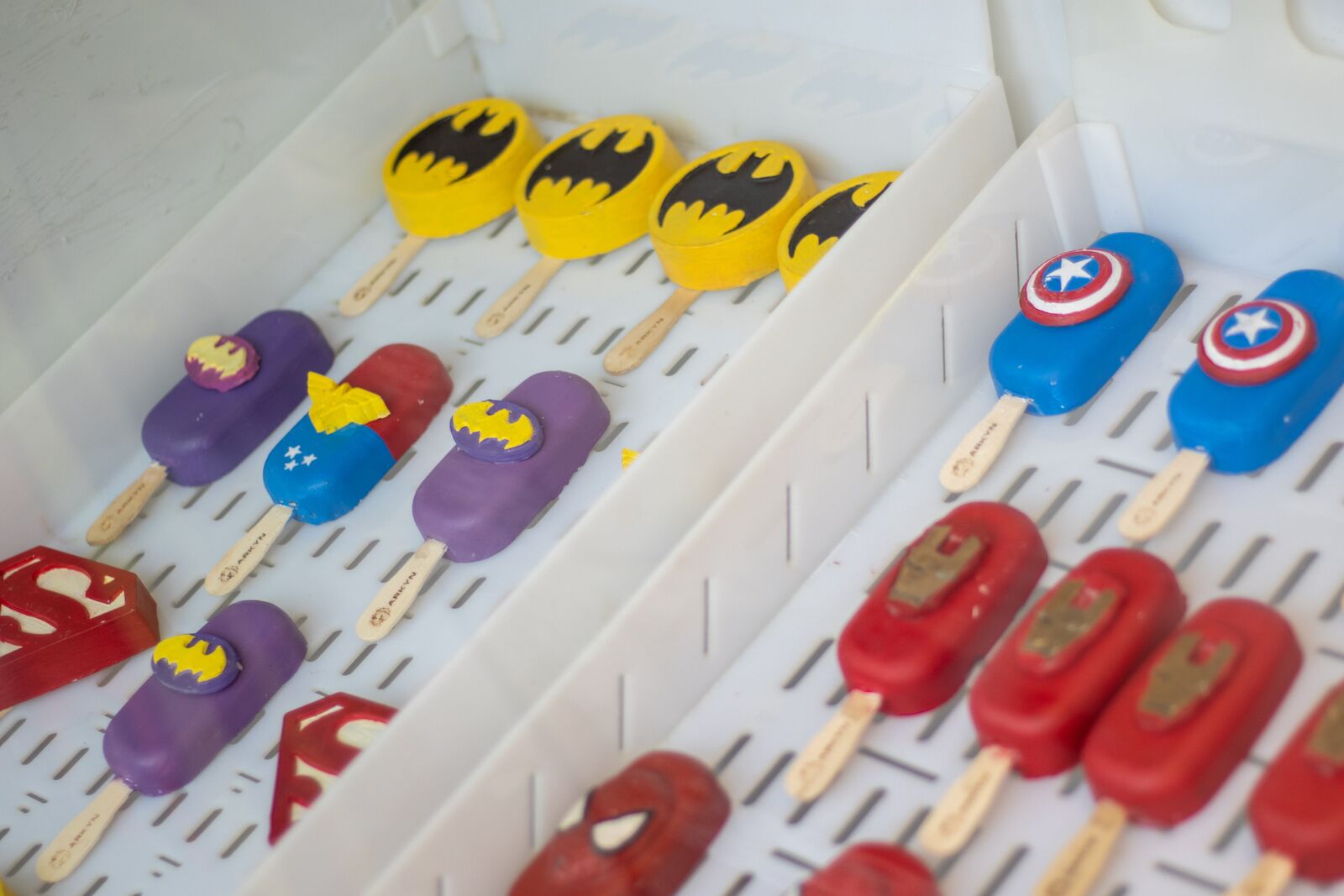 The cafe is outdoors and close to Palermo’s popular park and picnic hub Plaza Inmigrantes de Armenia, making it the best comic book cafe to enjoy during the city’s humid and festive summer. When the summer heats up, their ice cream and coffee drinks are seen all over the neighborhood.