The coffee scene in Buenos Aires, Argentina, is captivating. Even though porteños (Buenos Aires locals) always seem to be stressed and in a hurry, they stop, sit, and enjoy for hours when it comes to coffee.

To understand why, you must simply have a cortado in a historic cafe. The quality of the coffee won’t be the star, but you’ll immerse yourself deep in porteño culture. Then, experience the city’s ever-growing specialty coffee movement in shops where you can nerd out with the baristas and finally have that flat white you’ve been longing for.

These are the two sides to coffee culture in the Argentinian capital, and both are equally important. Buenos Aires is a city of contrasts where the classical and the modern coexist, and the coffee scene is a perfect place to experience both the old and new. 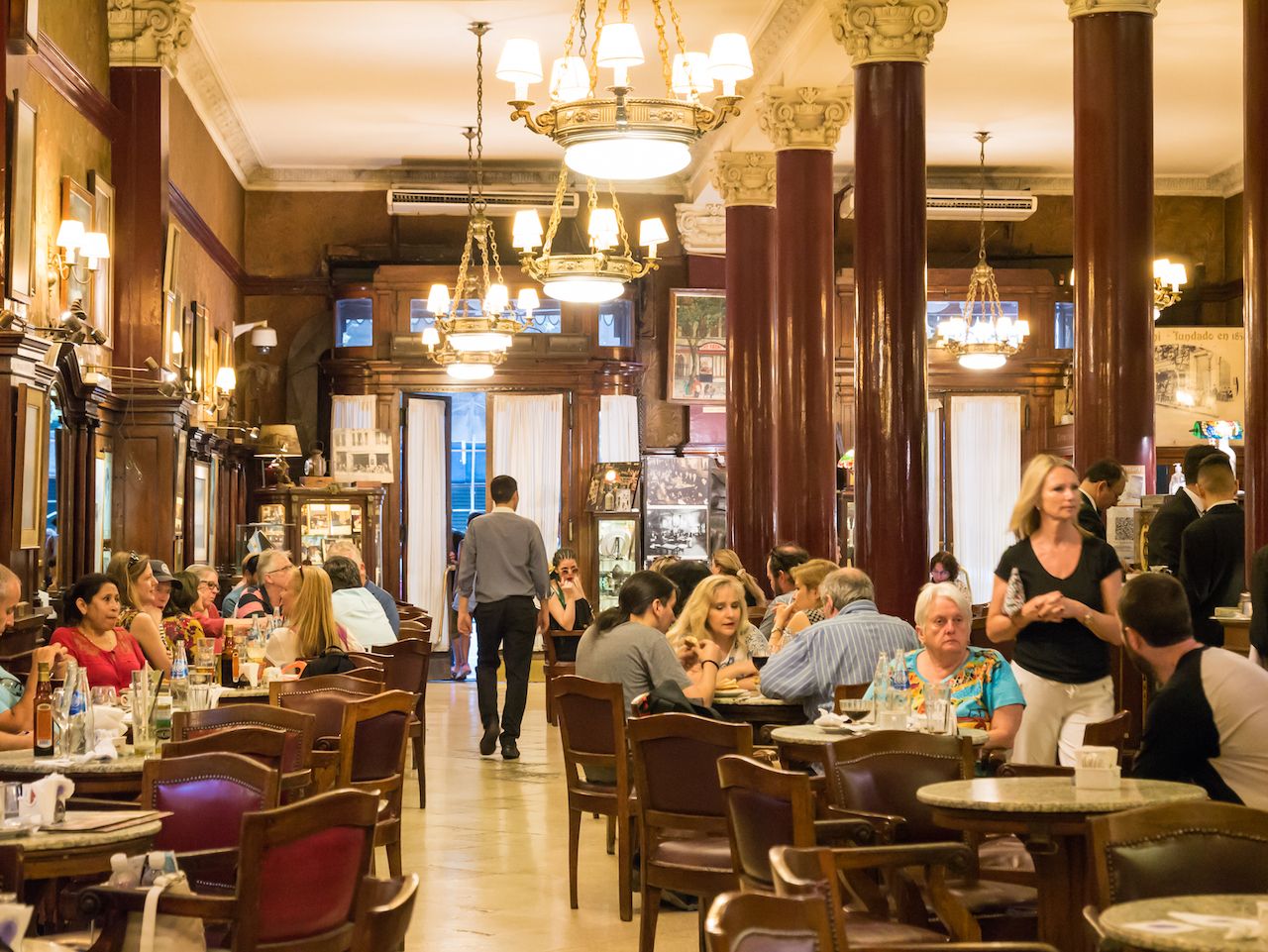 Buenos Aires is a historically rich city, and travelers don’t need to go on an expensive tour to get a feel for what the city was like during its golden age. Instead, walk through Microcentro and stop at a bar notable for a cup of coffee and a slice of cake. Bares notables are historic cafes that are significant contributors to the capital’s cultural heritage, and there are more than 70 recognized bares notables today. Inside, the decor remains untouched and walking through a bar notable’s doors can feel like traveling back in time.

One of the most popular among tourists is Café Tortoni, which dates back to the 1850s. It’s the oldest cafe in the city, and is known for past regulars like painter Quinquela Martín, writer Jorge Luis Borges, and tango singer Carlos Gardel. There’s often a line of people at the door waiting for a table, particularly on nights when the cafe hosts tango shows. Arrive early on show nights and, no matter when you visit, allow for plenty of time. No one is in a hurry here.

There are other options for people who aren’t a fan of lines. Visit El Viejo Buzón in Caballito, where the decorations mostly consist of old football jerseys hanging from the ceiling, for a neighborhood feel. Las Violetas features classic Art Nouveau decor, and was voted the best historic cafe by locals in 2017. Grab a cuppa at London City and people watch as crowds come and go in the frenetic financial district. Finally, Don Victoriano, formerly known as El Gato Negro, is where to go for a twist on the historic. Here, the coffee is roasted in the same machine as it has since opening in 1920, and you can order coffee with spices like cardamom, or with milk and turmeric.

Chances are high that the coffee won’t be the best you’ve ever had at any of these spots, but you’ll be looking through the same window Gardel and other historic figures used to gaze through. If that doesn’t convince you, there’s always the pastries.

How to order at a historic Buenos Aires cafe 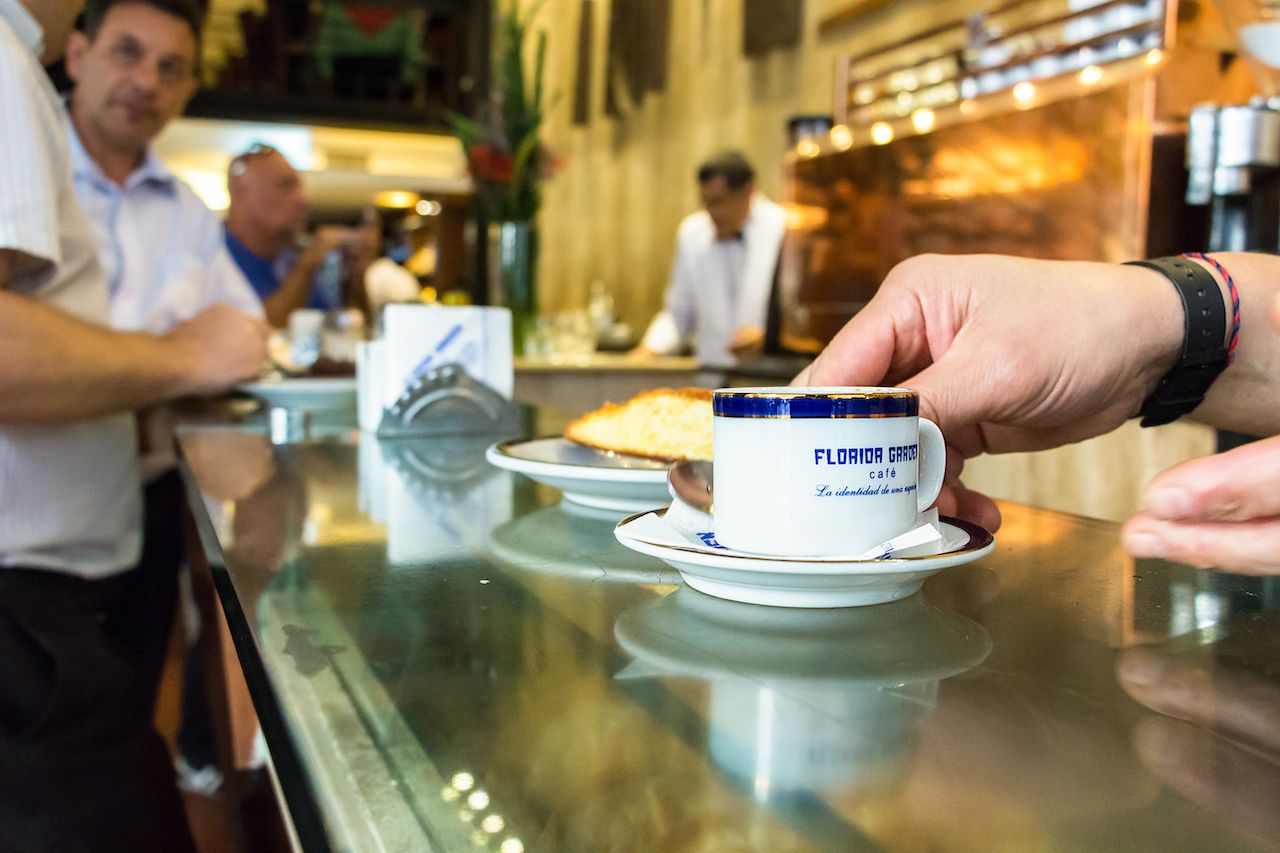 The first words you need to know when ordering at a bar notable are cortado and lágrima. A cortado is an espresso with a dash of hot milk, while a lágrima is mostly milk with a dash of espresso.

Coffees are served in two main sizes — pocillo, the smallest espresso cup, and jarrito, which is slightly larger. Café chico (small coffee) is an espresso, and to order like a locals, make a letter C with your index finger and your thumb when ordering. For a regular coffee with milk, ask for a café con leche.

That’s all you need to know for porteño coffee 101. The second step is to order your drink of choice with two medialunas (sweet croissants). 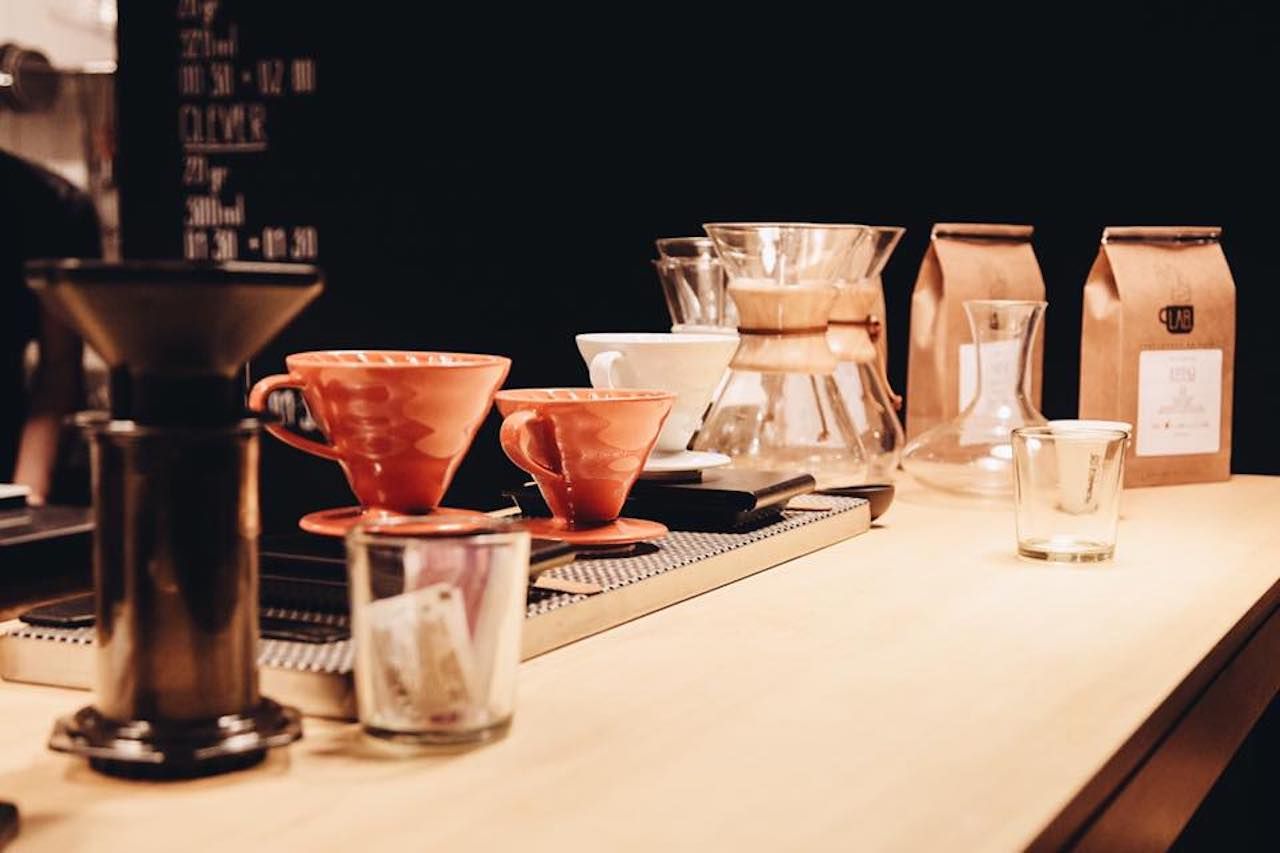 Over the last few years, Buenos Aires’ Palermo district has become the hub of a Latin-American specialty coffee explosion, which has since expanded across the city. At the center of the scene is LAB, one of the first coffee roasters to open its shop in Palermo back in 2014. LAB offers espresso and a variety of filter-style coffees like V60, Chemex, and Aeropress, but the drink that defines its legacy is the flat white.

The cafe’s organization allows customers to engage with the baristas and learn about the coffee beans and extraction methods. If you want to learn more, sit at the big bar with high stools that surround the coffee machine.

This new style of cafe has been a learning experience for the people used to the historic style, where coffee is served hot and in full cups. In these new shops, beverages are served at drinking temperature, and the menus lack options like jarritos, lágrimas, and cortados. LAB baristas have bridged the gap by taking time to converse with customers as they sit with their flat whites, slowly turning this new market into a trend.

The best option for vegans and non-dairy consumers is Birkin, which has locations in Botánico and Palermo with options of soy or almond milk. Birkin is perhaps the most innovative cafe in town, having added a matcha latte and a golden latte made with turmeric to its menu, both available with dairy or non-dairy milk. 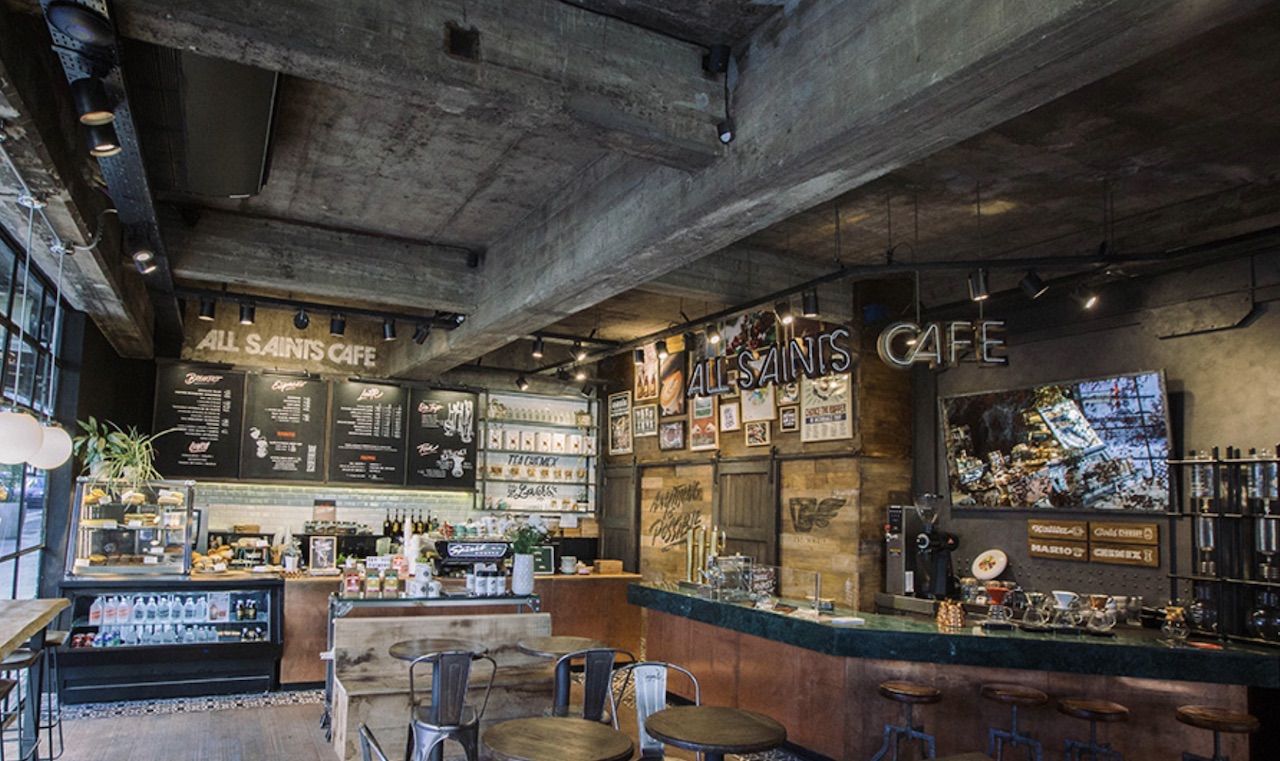 Modern coffee culture is easier and easier to find as porteños continue to embrace newer brews. Many, such as Cigaló in Doho and Duca in Palermo, resemble cafes in Melbourne and New York City. Negro has a number of locations in the center of Buenos Aires, and the flat white here rivals the one at LAB. Coffee Town is a little shop worth a visit in the heart of the San Telmo Market. In Recoleta, stop by The Shelter. All Saints Cafe is like Argentina’s version of Starbucks. Both locations, in Belgrano and downtown, offer everything from caramel frappuccinos to flat whites.

Food + DrinkEverything You Need To Know About Asados in Argentina
Tagged
Coffee + Tea Insider Guides Buenos Aires, Argentina
What did you think of this story?
Meh
Good
Awesome