Buenos Aires has a number of well-known neighborhoods. Palermo Hollywood and Palermo Soho come to life at night with their bars, restaurants, and nightclubs. Recoleta is an affluent suburb with leafy streets, home to 19th-century mansions designed by French architects. La Boca, settled by Italian immigrants in the 1830s, attracts visitors to its brightly painted corrugated buildings.

Then there is San Telmo, the oldest suburb of Argentina’s capital. Historians believe that the first settlement was founded here by the Spanish in 1536. Prior to the mid-1800s, it was home to dock workers then, the wealthy moved in and built mansions. When yellow fever swept through the area, they fled. Those mansions became homes for immigrants who arrived in the late 1800s. Take a walk through San Telmo’s slightly shabby, cobbled, narrow streets and discover one of Buenos Aires’ most historic neighborhoods.

Learn about its working-class history. 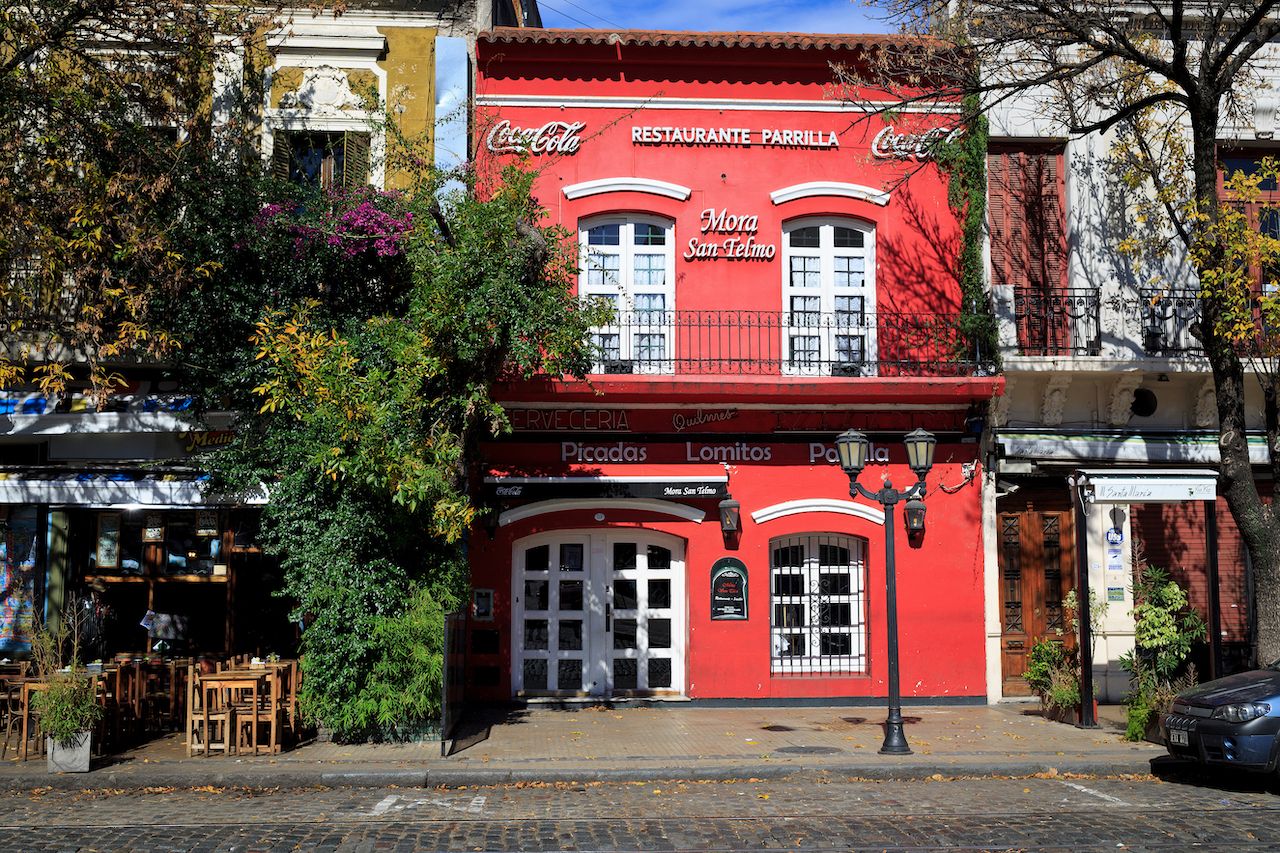 Once in the neighborhood, accessed from the city center by the 33A bus in about 20 minutes, your first stop should be the El Zanjón Museum. Situated at Calle Defensa 755, this 1830s mansion was abandoned during the yellow fever epidemic and later turned into apartments, with minimum standards of sanitation, for working-class families. Declared off-limits in 1985 — the government declared the building too dangerous for occupation — it was subsequently bought to be converted into a restaurant.

El Zanjón, which translates as “ravine,” once had a stream running below it. After its ground floor was dug out of dirt and rubble, excavators found tunnels below extending just over a mile, which rerouted this water. The story goes that when the stream subsequently dried up, the tunnels were used to get to other areas of the city. Old photographs, china, combs, toothbrushes, keys, and other artifacts found in the excavations can be seen on display in the museum. You can also walk below ground, sighting the original brick walls of the tunnels, a well, and a water-storage facility that resembles a brick kiln. It’s a great insight into old Buenos Aires and accessible as part of a guided tour, in English, at set times during the day.

Also in San Telmo is the Museo Histórico Nacional, which primarily focuses on Argentina’s 1810 revolution, the War of Independence, and the rest of the 19th century but also contains information on the country’s pre-colonial history. The sword of Independence hero José de San Martín is on display, guarded by a soldier. You’ll get a lot more out of the museum if you take the English tour, as most exhibit descriptions are written in Spanish. Situated in Parque Lezama, you could take a break from walking and relax in the gardens and sip a mate, a caffeine-rich herbal drink consumed by the gallons across Argentina.

As you walk through the streets, have a read of the various information boards in the area, there’s one in Plaza Dorrego and another on the side of Bar Plaza Dorrego. The area has two art museums, Museo de Arte Contemporáneo Buenos Aires and Museo de Arte Moderno de Buenos Aires, which displays thousands of modern and contemporary Argentinian works along with international artists’ work. Both are in Avenida San Juan. 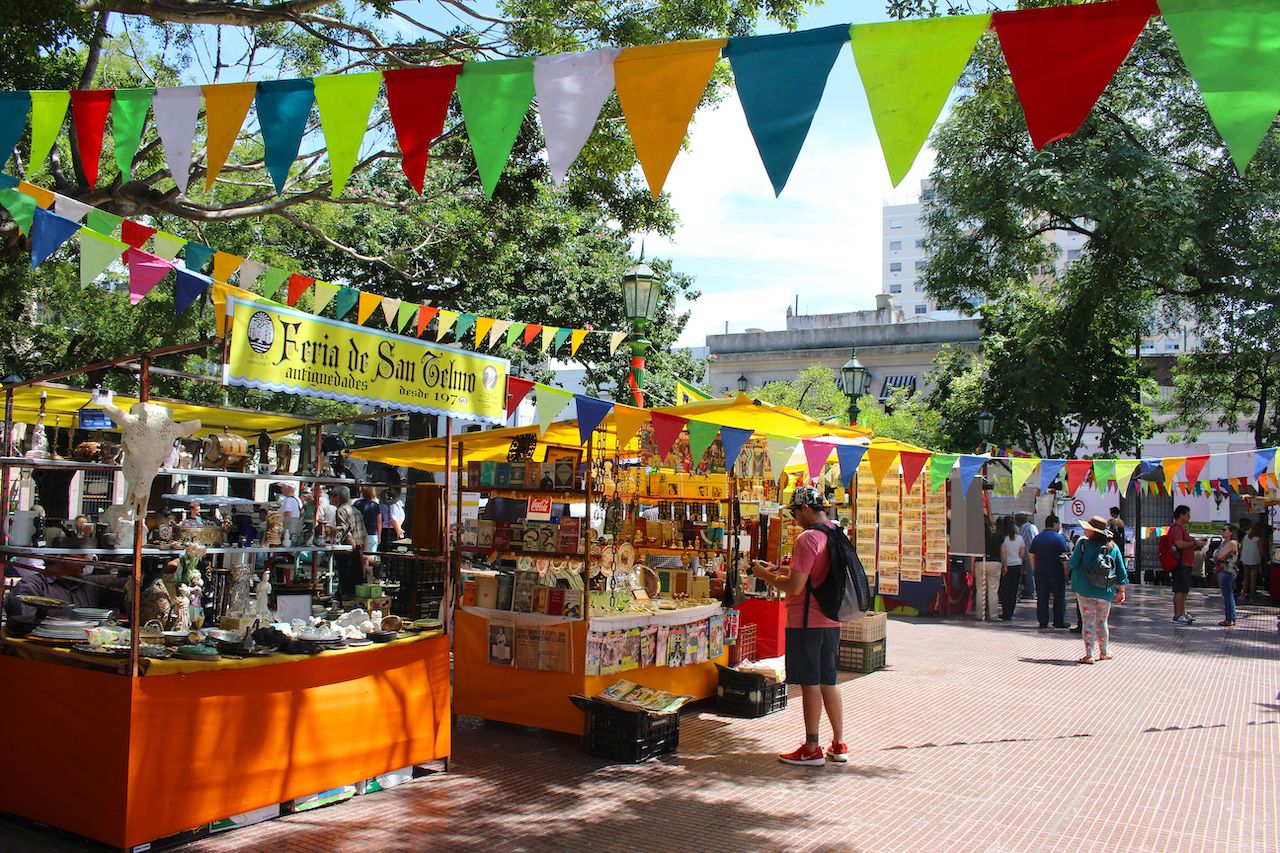 On weekdays, San Telmo’s streets are rather quiet with little happening, great for strolling and taking in the architecture and atmosphere of the neighborhood, and checking out of its numerous antique stores. Rundown buildings sit amongst well-preserved colonial structures, giving the neighborhood a unique vibe that stands apart from the rest of this massive city. On Sundays, though, San Telmo is bustling with hundreds of people trawling the stalls of Feria de San Telmo along cobbled Calle Defensa. The market itself is massive — around 10 blocks of vendors and people — and has been in operation since 1970.

Your best bet is to start at the far end and walk through the market until you reach the Plaza de Mayo, home to the Presidential Pink Palace, Casa Rosada, where Eva and Juan Peron gave speeches from the balcony back in the 1940s and ‘50s. The market begins around 10 AM and runs until about 5 PM, being busier in the afternoon — sometimes lose-your-friends-in-the-crowd busy. Several hours can be spent viewing handicrafts, jewelry, antiques, paintings, and clothing, amongst other items. To take a break from the crowds, pop into the El Zanjón Museum as you pass. 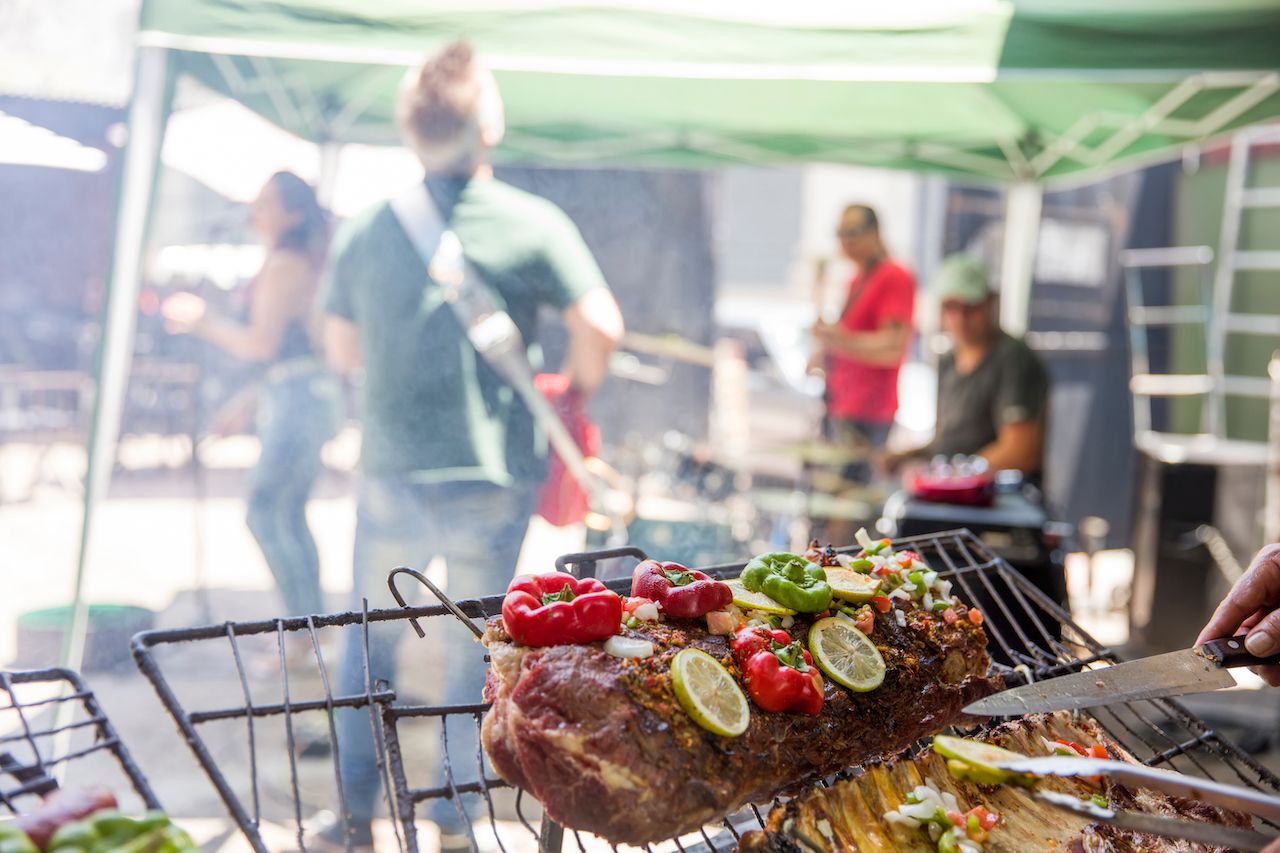 Street food is the forma preferida de comer at the market. In courtyards resembling car parks without cars, you can smell meat and chorizo sizzling over open grills, cooked by singlet-wearing men behind wisps of white smoke. Try out a hamburguesa (hamburger), choripan (sausage in bread), or bondiola (strips of meat in bread). Live music follows you through the streets, and you’re sure to catch sight of tango dancers either outside or in cafés and restaurants. This is a great place to stop for a beer or meal and be entertained. Back on the street, don’t forget to look up. Colonial buildings with wrought-iron balconies and shuttered narrow windows are reminiscent of Paris. The market finishes in Plaza Dorrego, which is packed with antique stalls.

If you miss the Sunday market, wander San Telmo Market — a permanent fixture located in a building designed by an Italian architect back in 1897. Opened for the European immigrants, this large indoor market now sells fruit and vegetables and is home to a large number of antique shops. It’s like stepping back in time — be sure to check out the wrought iron and glass central area. Opening daily at 10 AM., during the week it’s quietish with a few stalls only trading at the weekends. You can also eat here at the small cafés/restaurants. 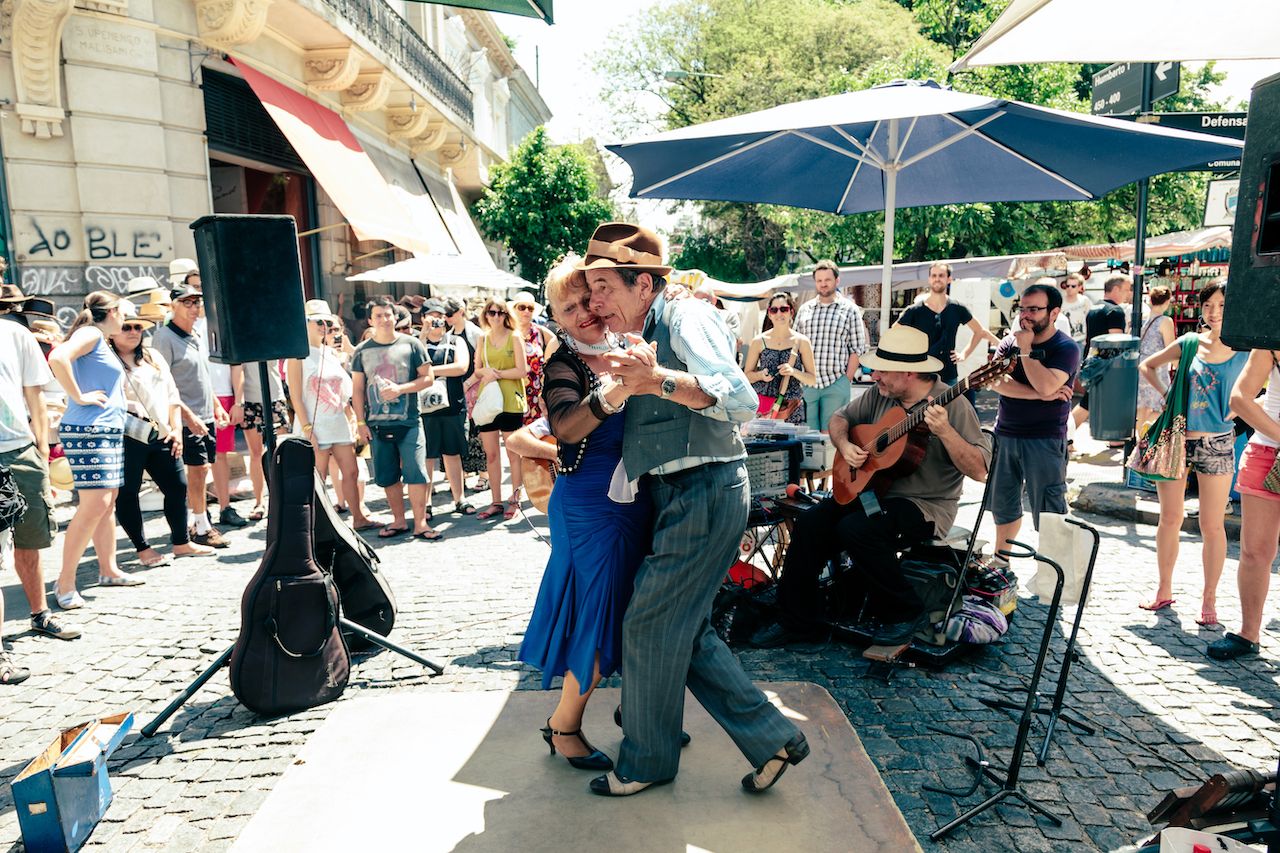 Sunday really is the time to visit San Telmo. In the evening the antique stalls have gone from Plaza Dorrego, replaced with tables and chairs to dine at and, at one end, wooden floorboards. Below colored light bulbs strung between trees, well-dressed locals tango amongst a few shuffling tourists to scratchy recorded accordion music. It sounds a lot like 1930s or ‘40s radio, but you’re there for the dance party not the tunes.

It’s like a scene from an old movie set, with the square intimately lit by old-style street lamps and overlooked by 19th-century balconies. The tables are served by the surrounding restaurant, so everyone in your crew can eat what they want and still dine together. Booze flows freely, and the party tends to stretch long into the night — often into the next morning. To see a more professional display of tango dancing, visit one of the tango music halls in the district that offer dining and a show. You can also sign up for individual or group classes at a number of local schools. 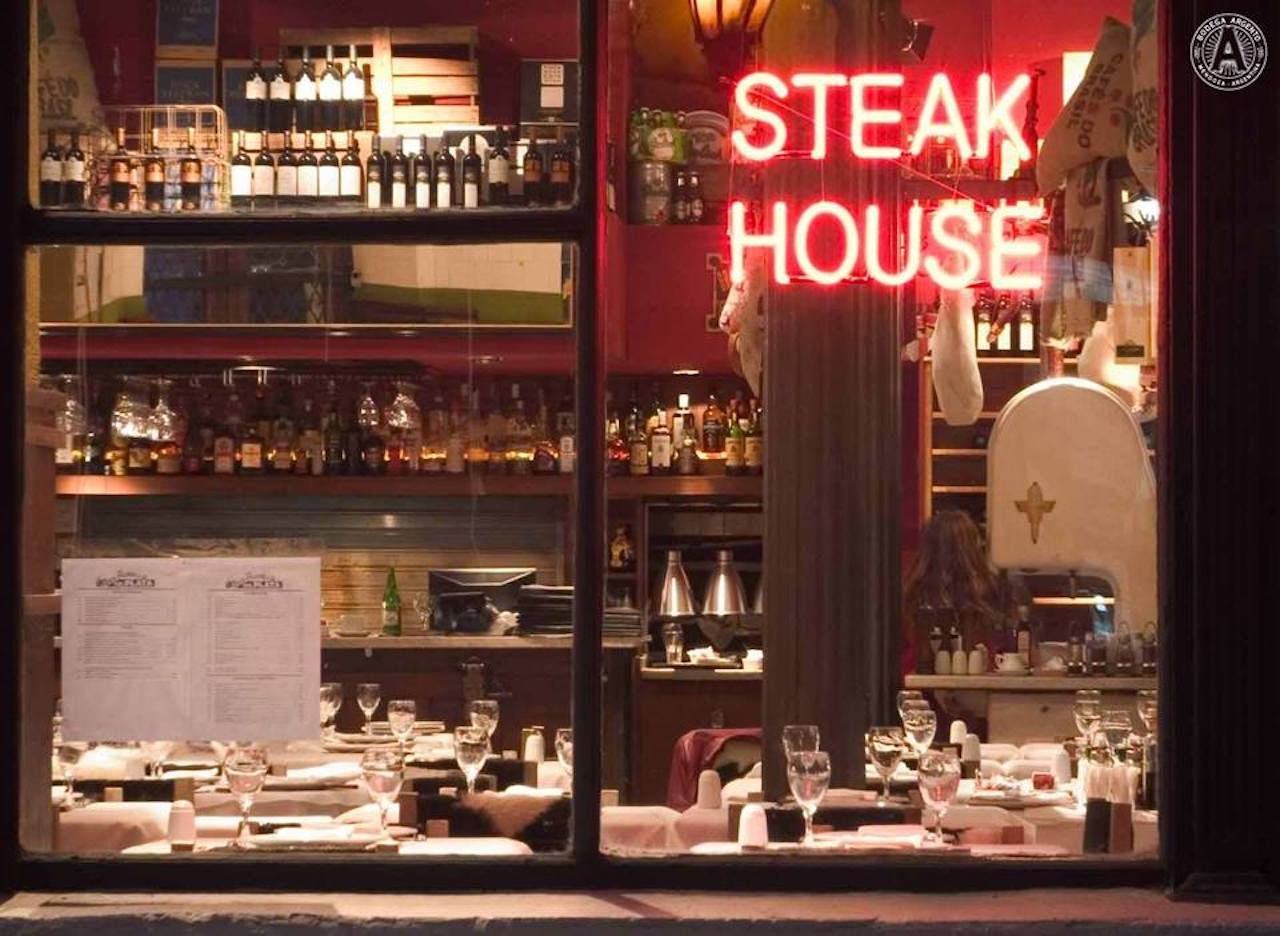 With all the walking you’ll do around Buenos Aires, you’ll need to eat. Get yourself into one of the traditional Argentinian steakhouses that are all over town. Argentinians eat more than 100 pounds of beef per head every year. San Telmo has quite a number of steakhouses, especially along Calle Defensa, so finding one isn’t a problem.

Argentinians tend to eat late, with many restaurants not opening until 8:00 PM. The meat cooks slowly over a parrilla, a grill heated by wood or charcoal. Start with provolone, a grilled circle of cheese that, in addition to being delicious, will make it look like you’ve done this before. A thin crunchy outside hides a smoky, salty, soft inside. Gran Parilla del Plata, where Michelle Obama dined while in town, is a busy corner restaurant in an area of otherwise rundown, graffitied buildings and random rubbish piles. It shines like a lighthouse in the dark. Reservations might be best, or you could be in for a long wait. The steak will quite possibly be the tenderest you’ve ever had, though there’s plenty else on the menu, including blood sausage, chinchulines (small intestine), chorizo, kidneys, and ribs. There’s chicken, fish, pizza, and a number of vegetable dishes.

Another good option for first-timers in the neighborhood is the dim atmospheric interior of Bar Plaza Dorrego on Plaza Dorrego. This café/bar has been there for over 100 years. Watch San Telmo’s people go by through the large windows looking out onto the square while trying out the local drink, Fernet Branca.

Budget Travel7 Ways To Save Money on Your Trip To Buenos Aires
Tagged
Culture Trip Planning Buenos Aires, Argentina
What did you think of this story?
Meh
Good
Awesome