Every year since 1983, thousands of people dressed as mermaids, mermen, pirates, and all types of sea creatures have flocked to Coney Island to celebrate art and culture at the Mermaid Parade in Brooklyn. It is, by some accounts, the largest art parade in the United States. On June 22, 2019, nearly 850,000 people attended — some 160,000 more people than live in the city of Boston. And when it comes to pure spectacle, those 850,000 people aren’t let down by the 3,000 or so costumed masses marching in the parade.

The goals of the Coney Island Mermaid Parade, according to the event’s website, are to “bring mythology to life for local residents who live on streets named Mermaid and Neptune,” as well as “create self-esteem in a district that is often disregarded as ‘entertainment.’” It’s also, importantly, a parade that lets “artistic New Yorkers find self-expression in public.”

The Mermaid Parade was started by Dick Zigun, a local advocate for the arts. Inspiration came from the sea-themed adornments that topped Coney Island’s buildings in the 1970s when Zigun moved there. Today, it’s gone from a community event to a well-publicized parade with a queen mermaid and king Neptune. (Woody Guthrie’s kids Arlo and Nora Guthrie were crowned in 2019.)

Along with costumed revelers, there are antique cars, dance groups, hand-pulled floats, marching bands, and live music acts. The water theme is taken loosely by some, as each float has its own agenda and message to push — whether that message is whimsy, immigrant rights, or climate change.

It costs $200,000 to put on, according to CNN, and is funded by the nonprofit Coney Island USA and sponsors like the local Coney Island Brewing Company, which brews beer across the street from the start of the parade.

Words and numbers, however, don’t do the Mermaid Parade justice. For that, there are photos. 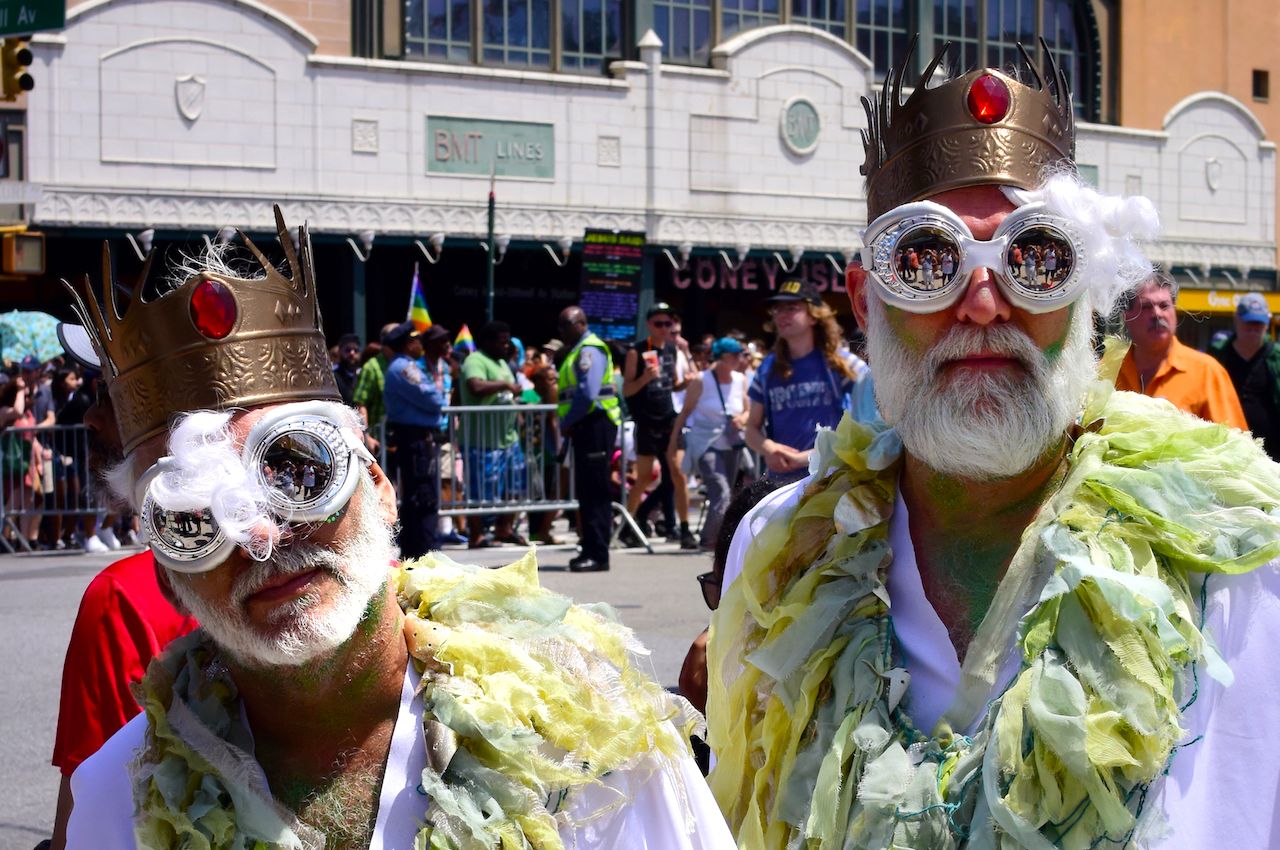 A couple of crowned mermen take their spot along with the other bystanders on the parade’s path. 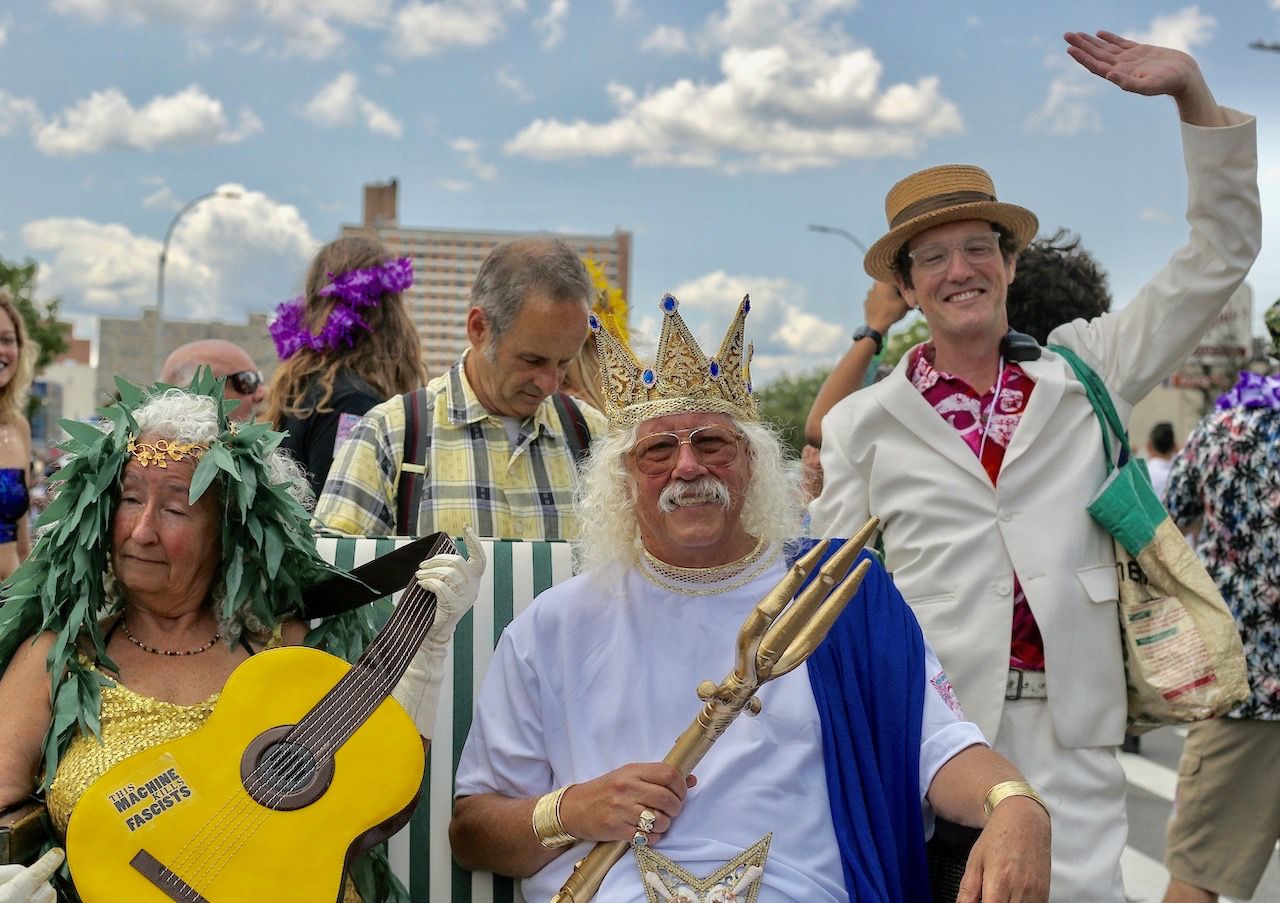 King Neptune and queen mermaid this year were Arlo and Nora Guthrie, the kids of the late Woody Guthrie. Nora carried a guitar that read, “This machine kills fascists.” 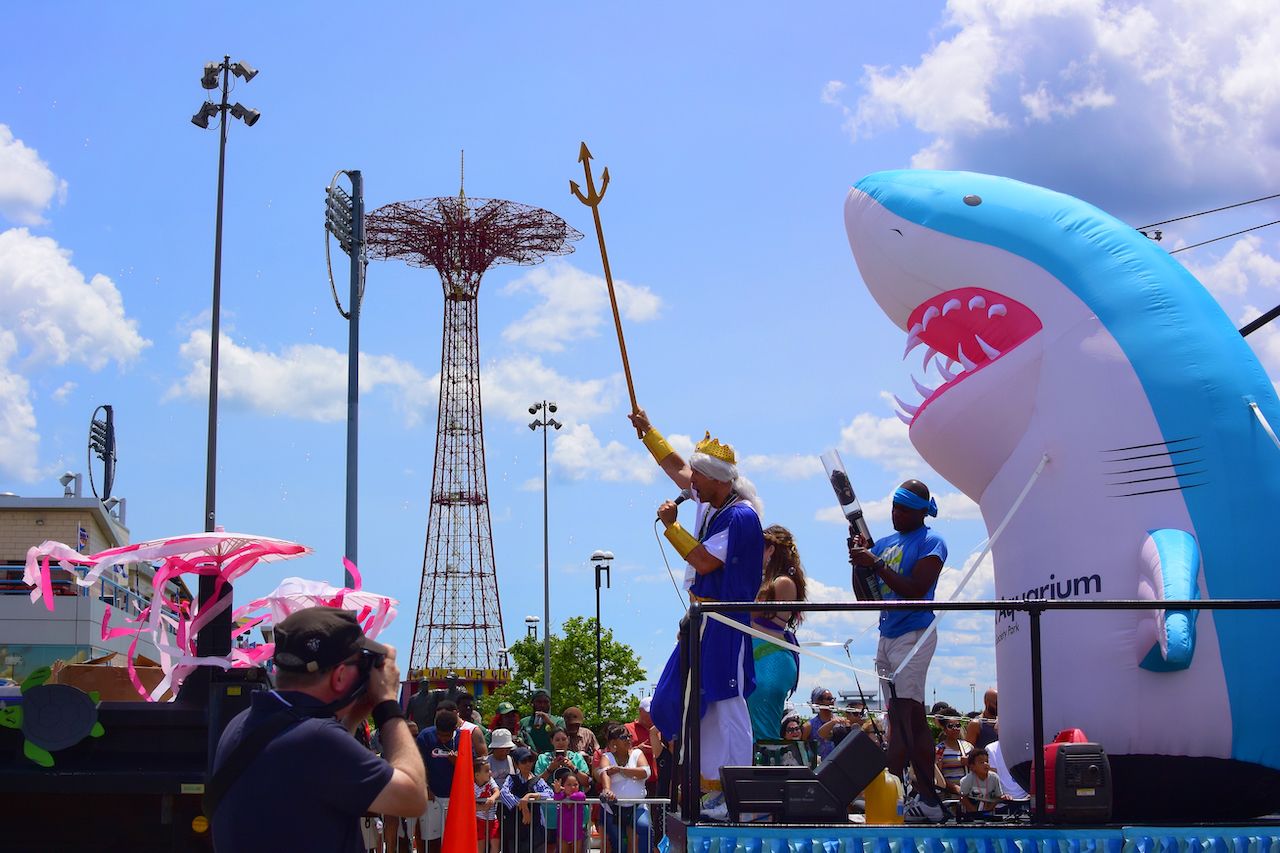 A man with a trident pushes onward riding the aquarium’s float. 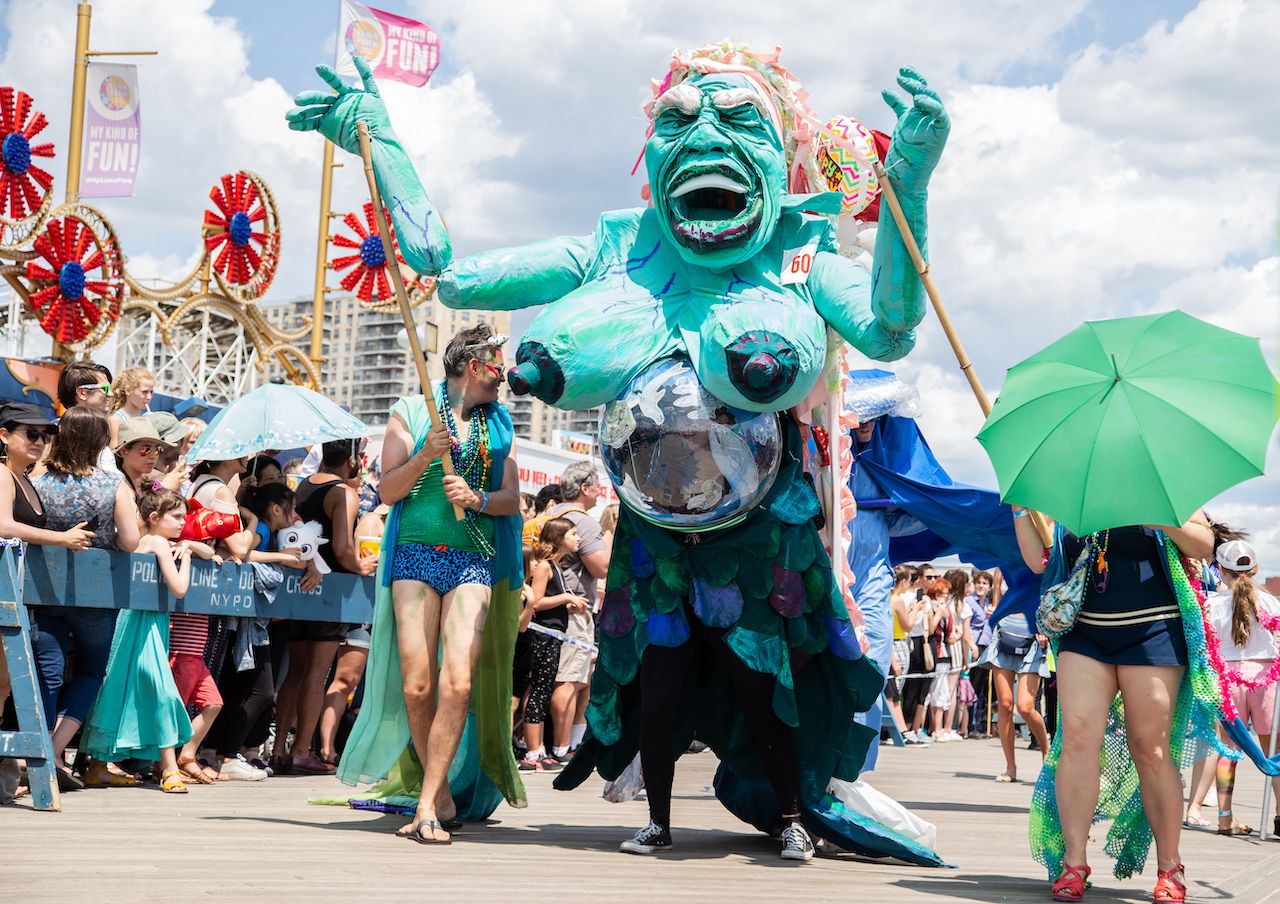 The Mermaid Parade may be about mermaids, but it’s far from a beauty pageant. Other sea creatures make appearances as well. 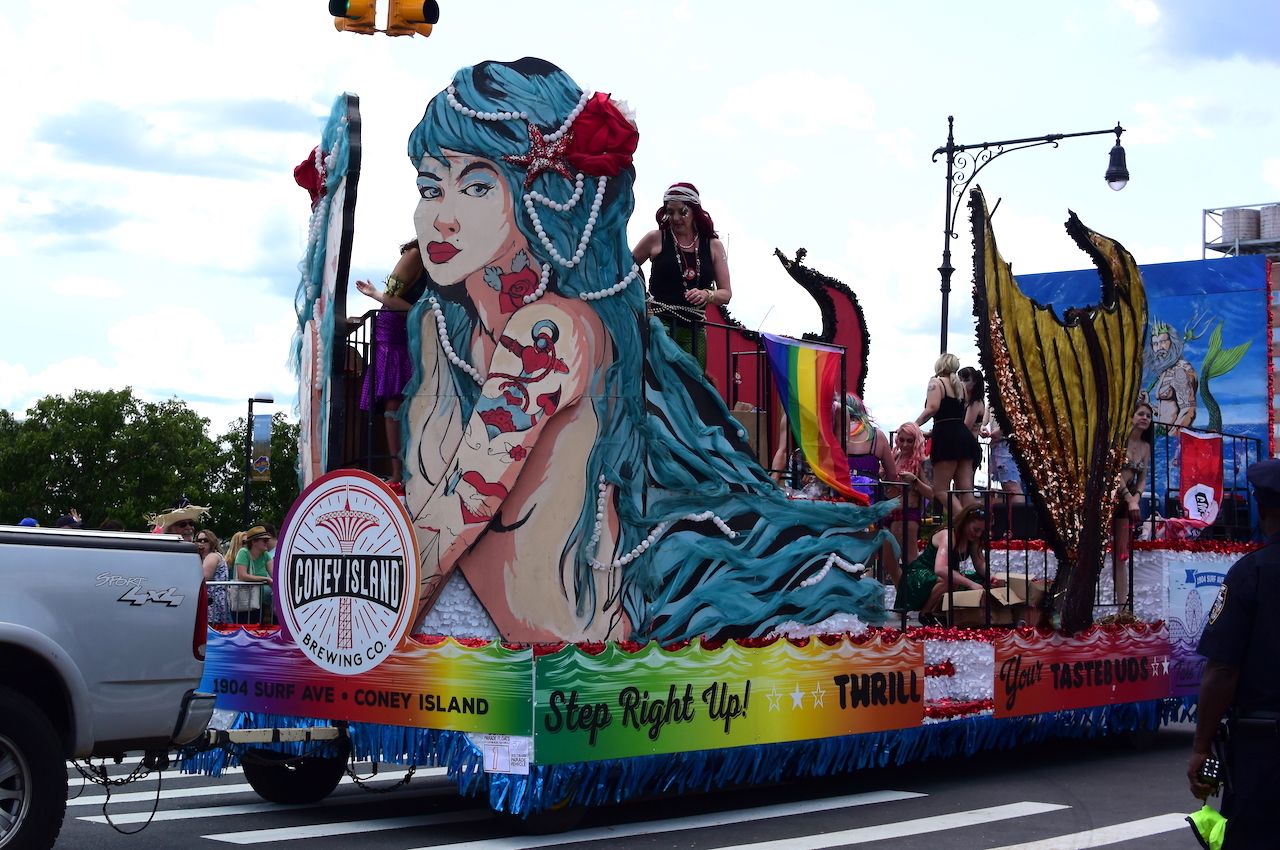 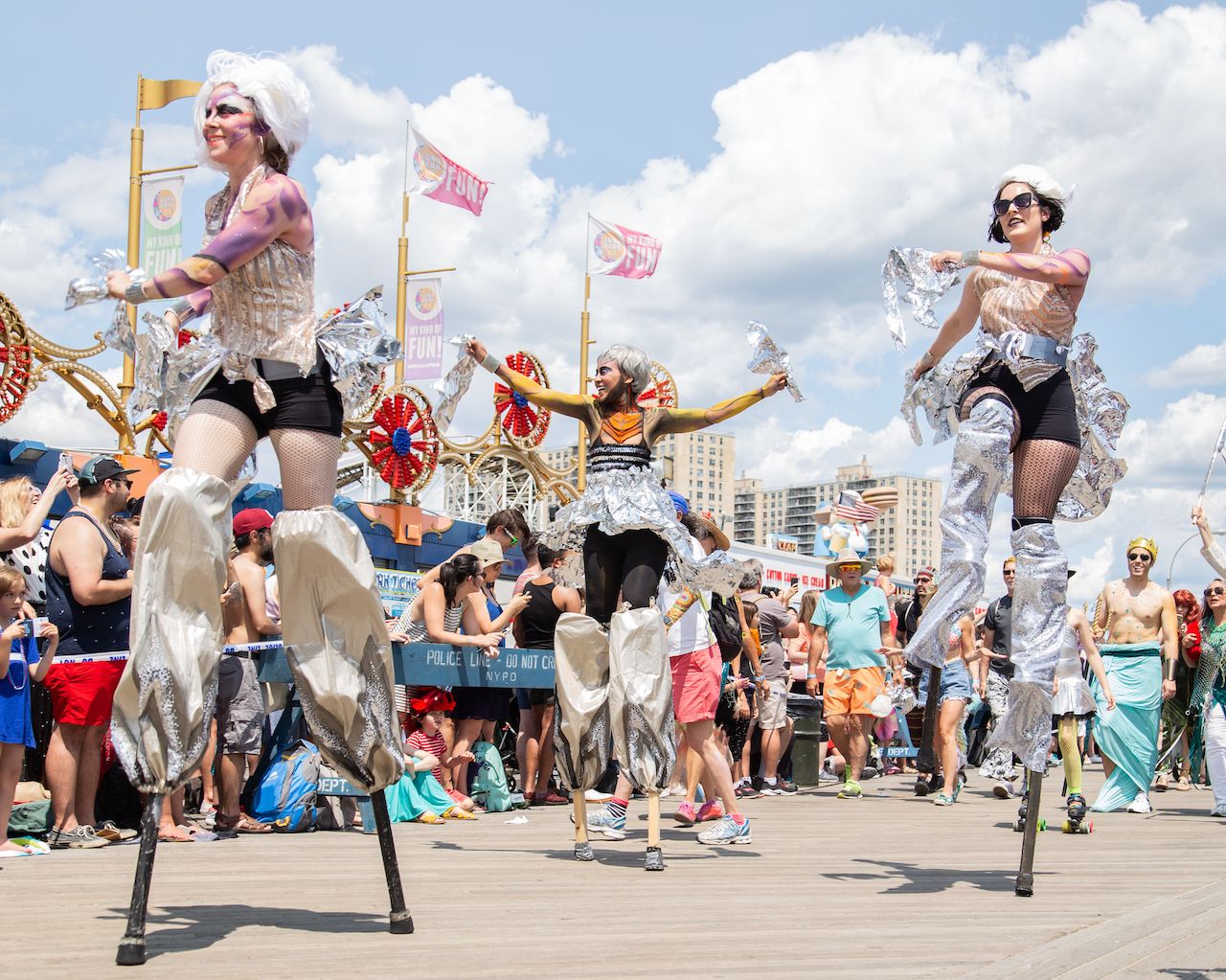 High flying acts make an appearance, as to be expected at an event so close to Coney Island’s much-loved sideshow. 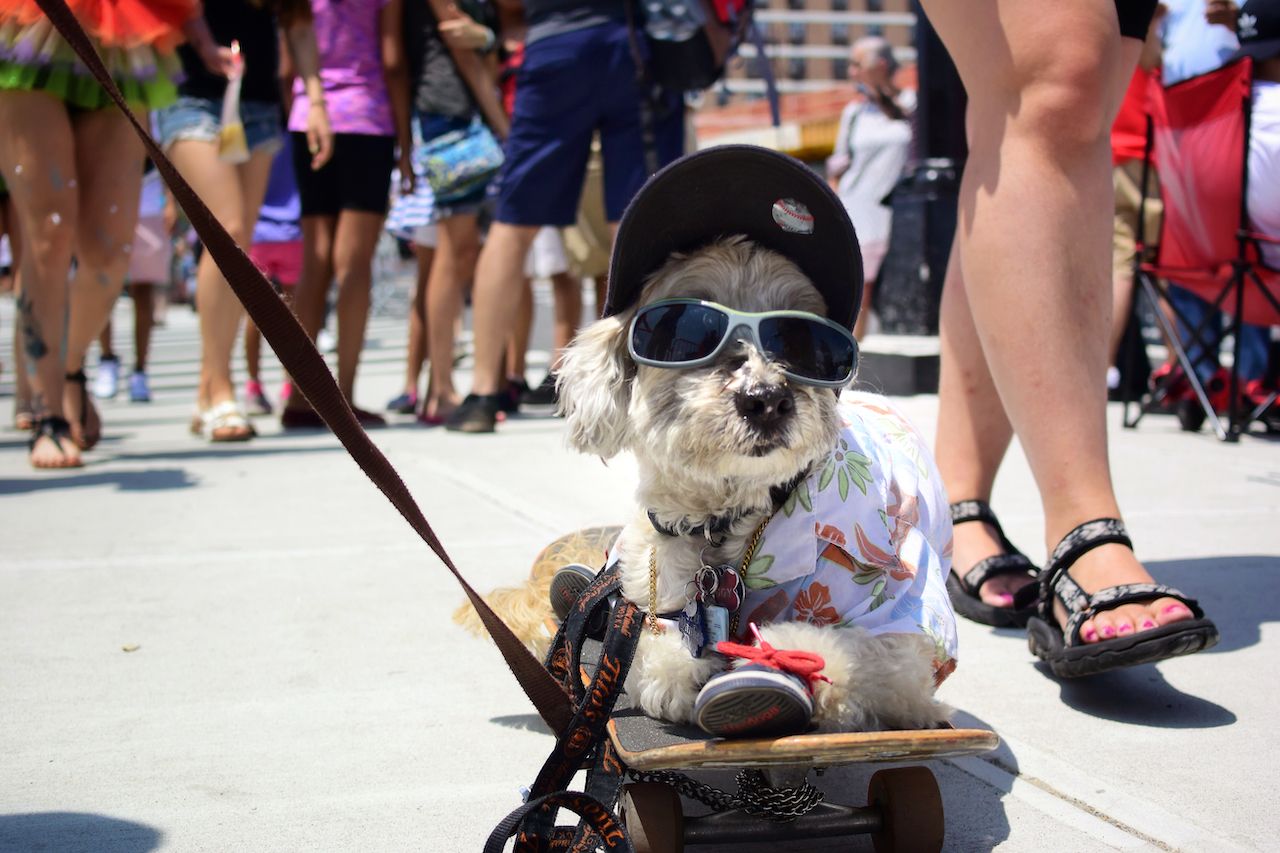 Dogs in beach attire also took part. This is Shaggy, a skateboard loving dog who stole the show. 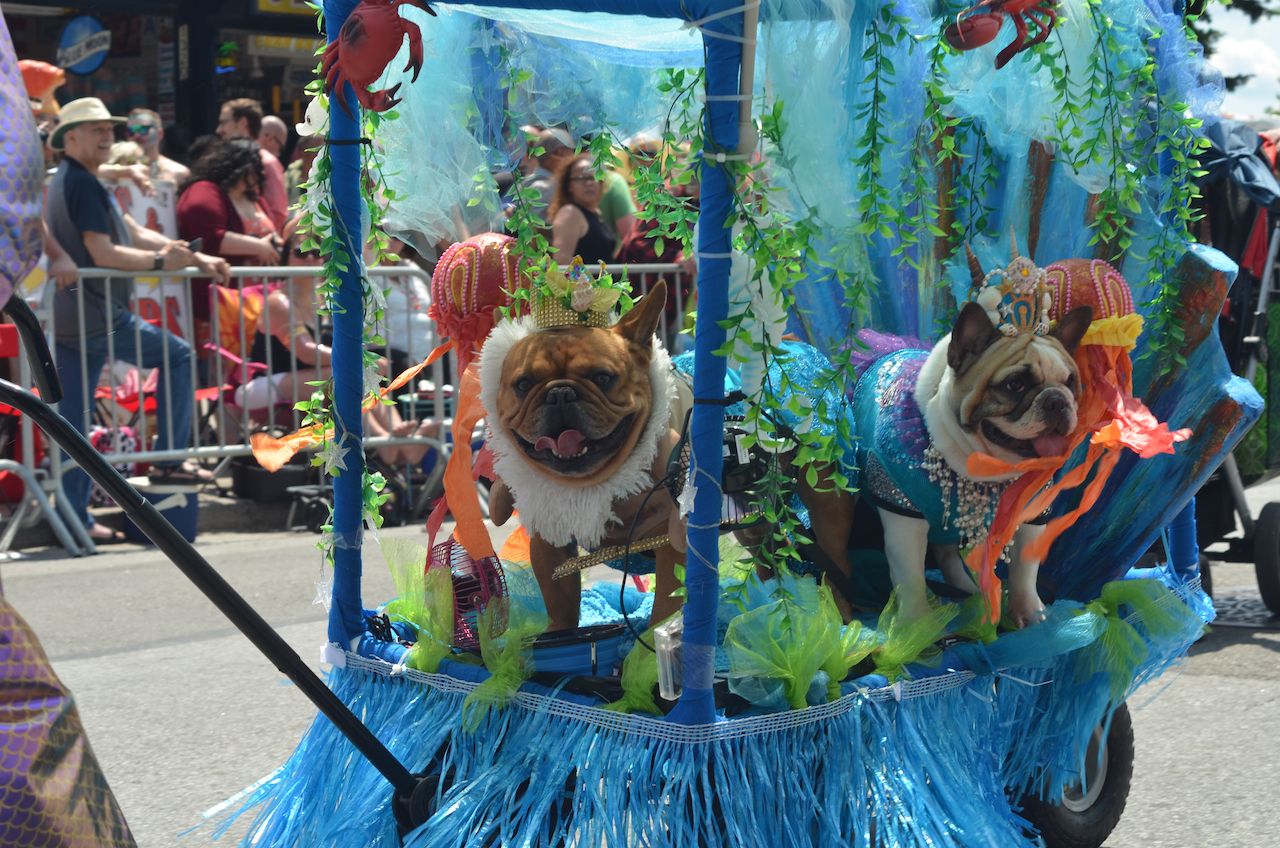 Some dogs were in more regal attire. 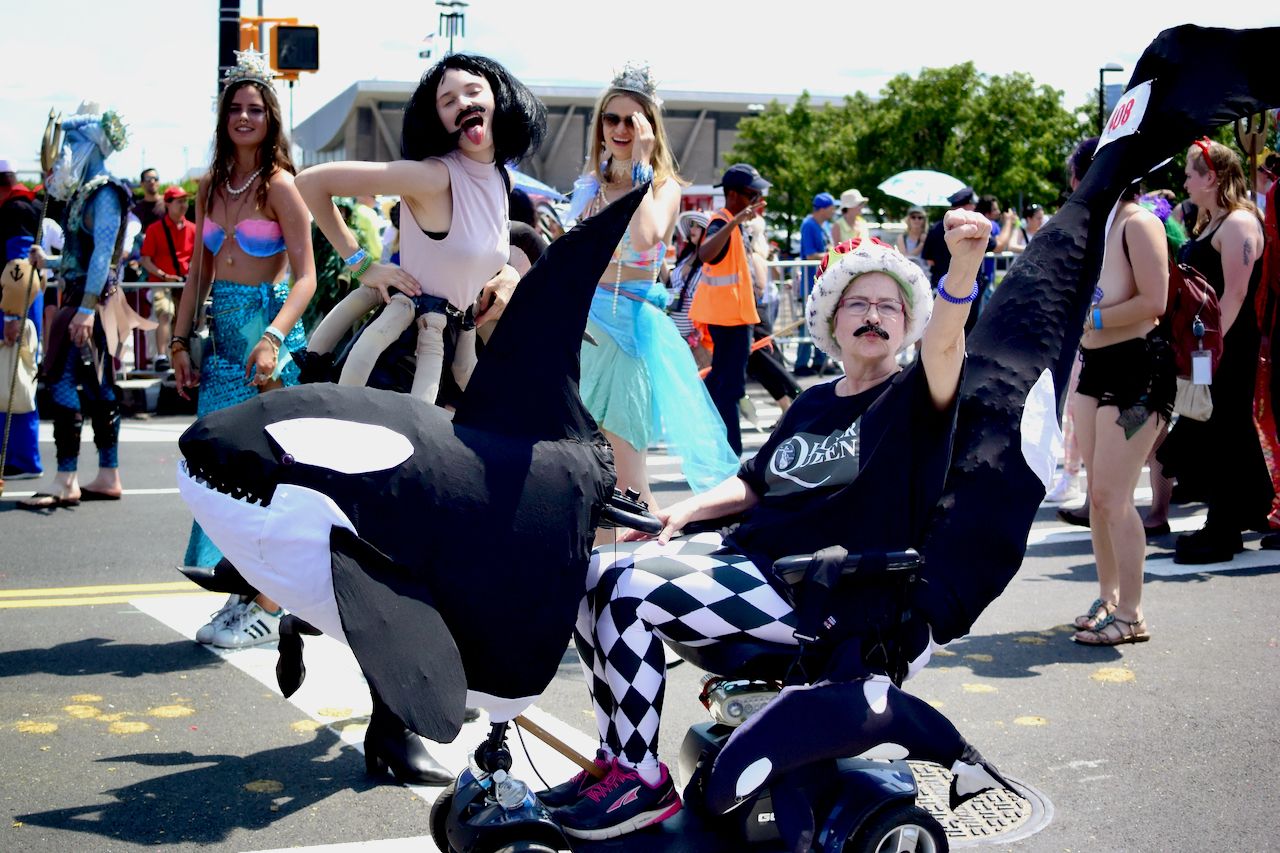 Killer whales rode through, but they were friendly. 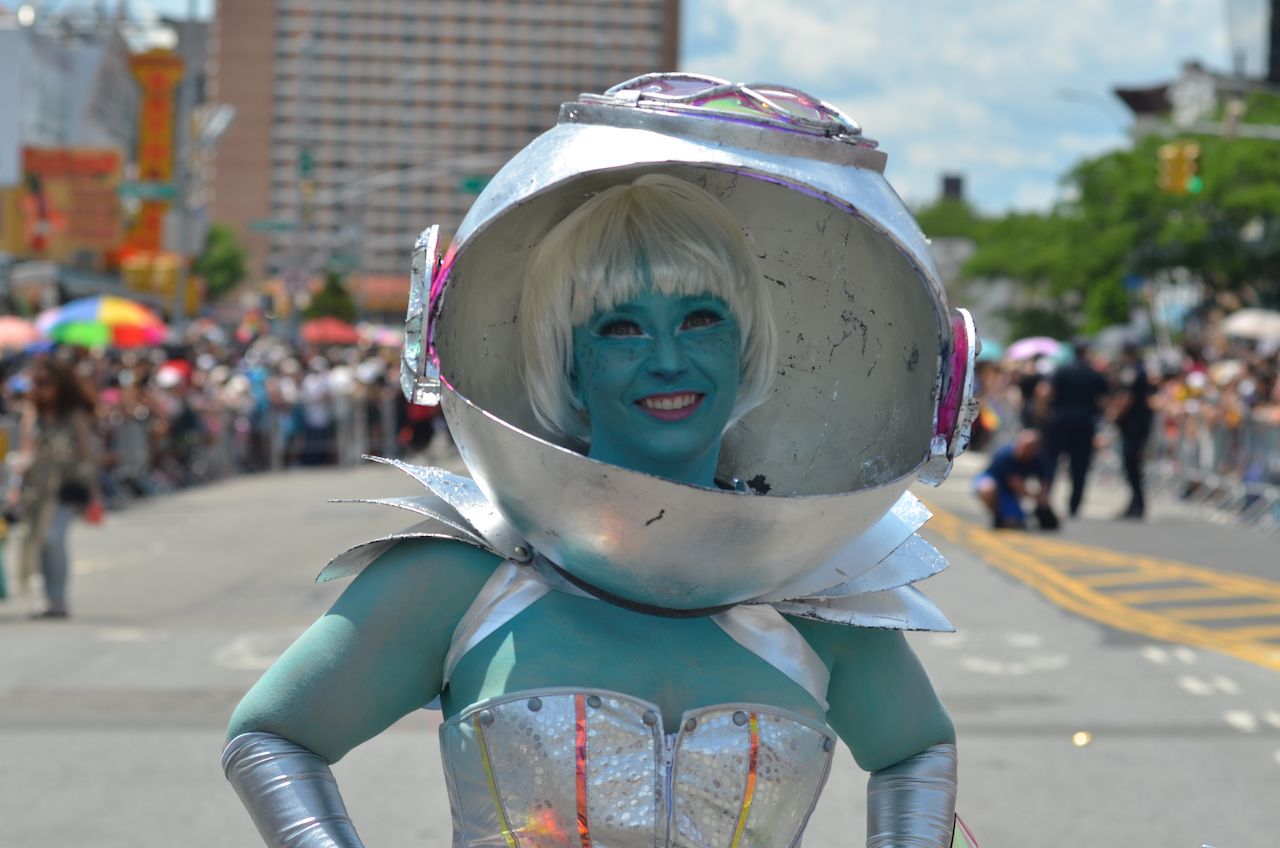 Body paint companies are likely a big fan of the Mermaid Parade. 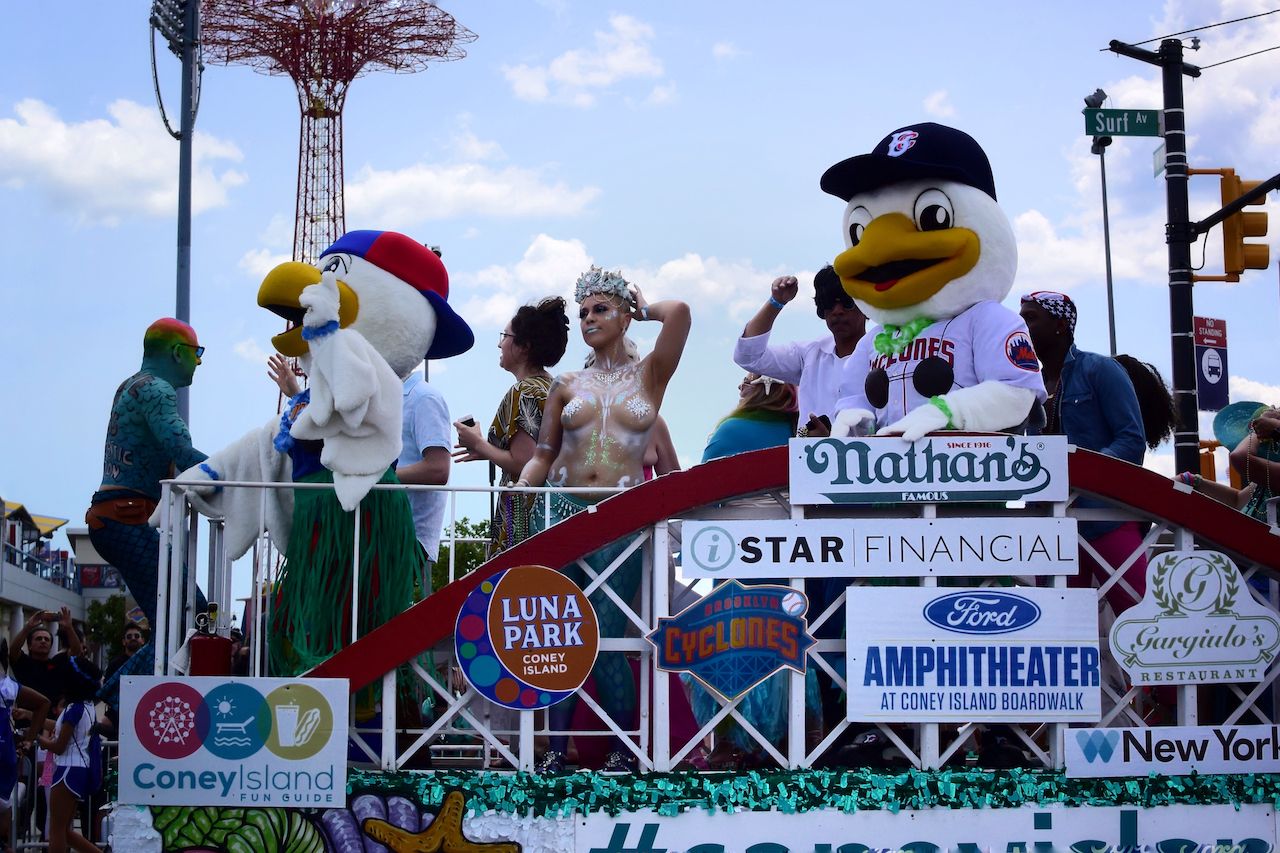 Some floats had themes, others took a very open mind to what deserves to be on a float. 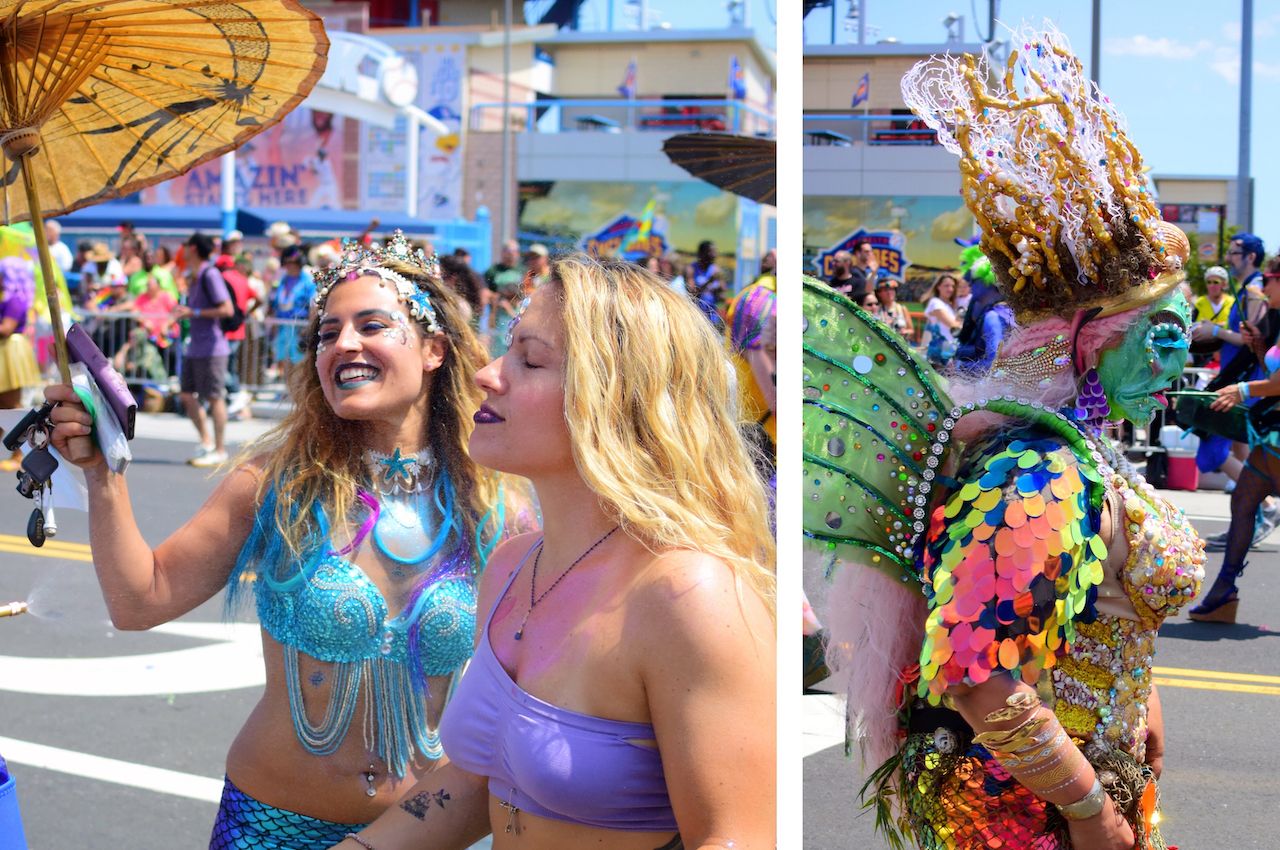 Possibly the only place in the world that mermaids walk freely alongside sea creatures. 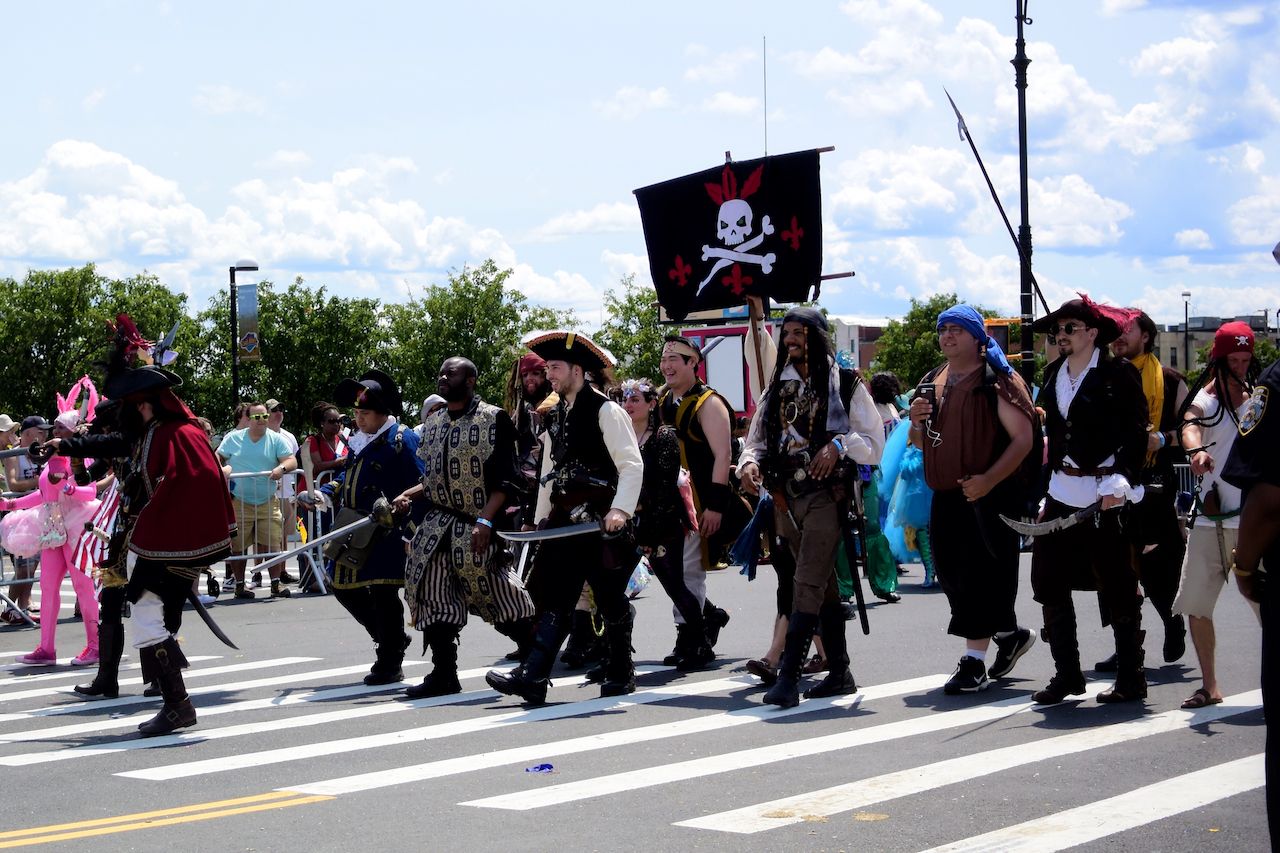 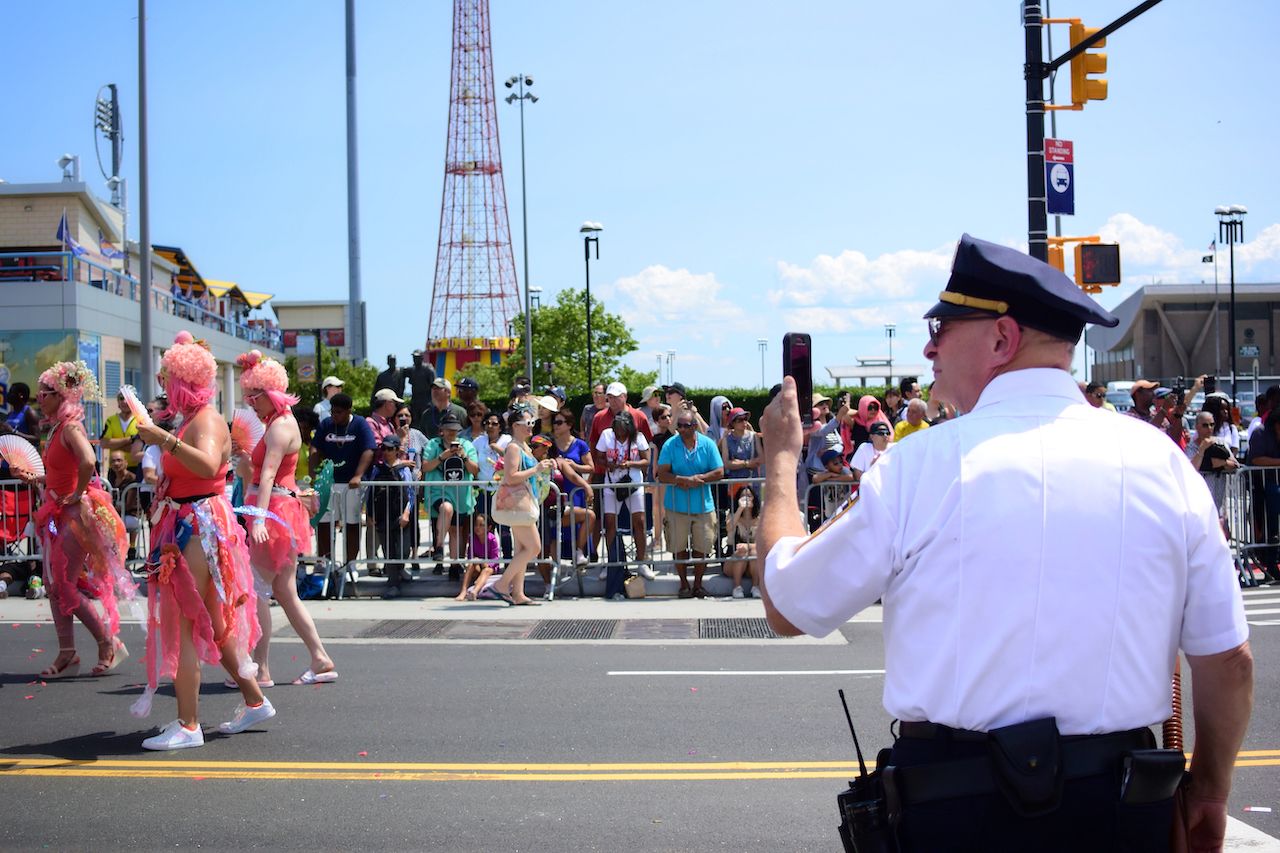 Even the police working the event got in a little sightseeing. 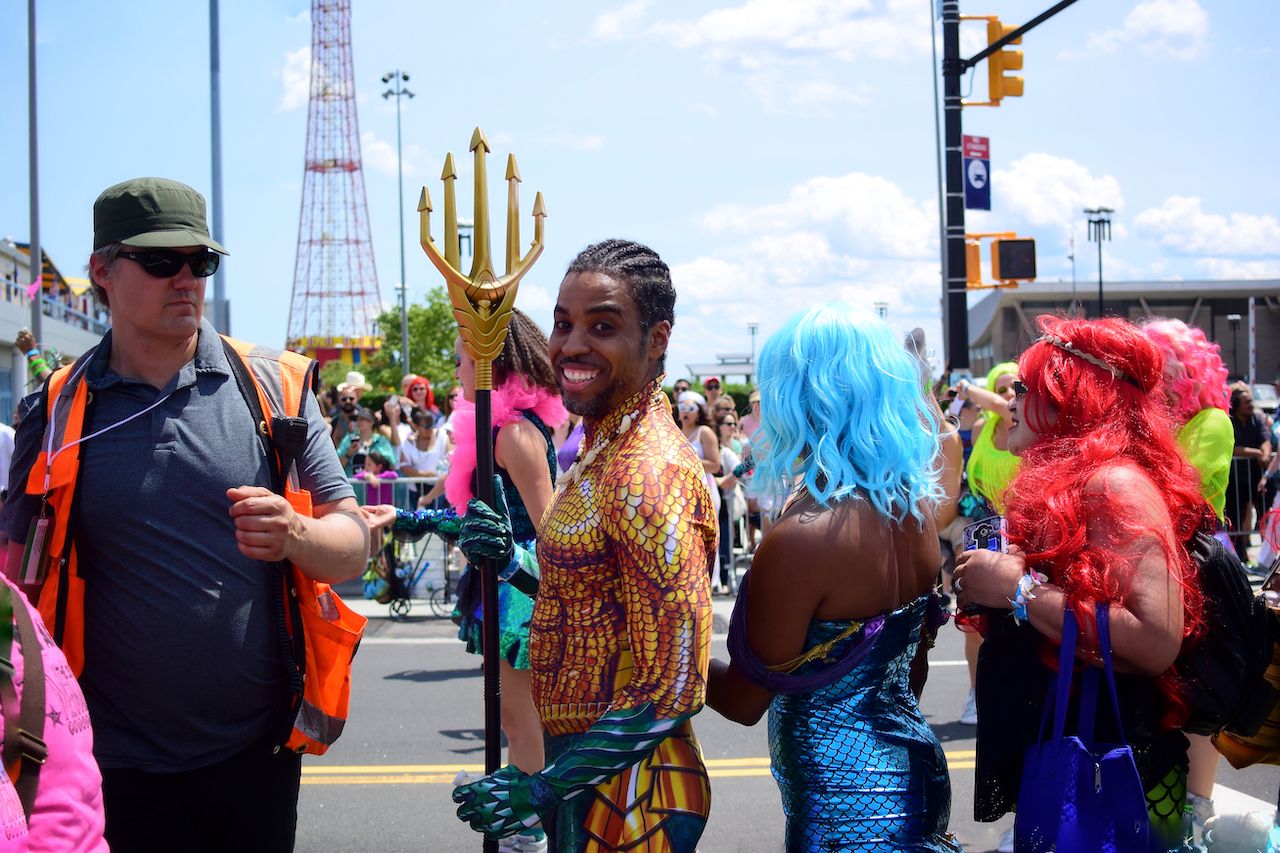 Aquaman made several appearances throughout. 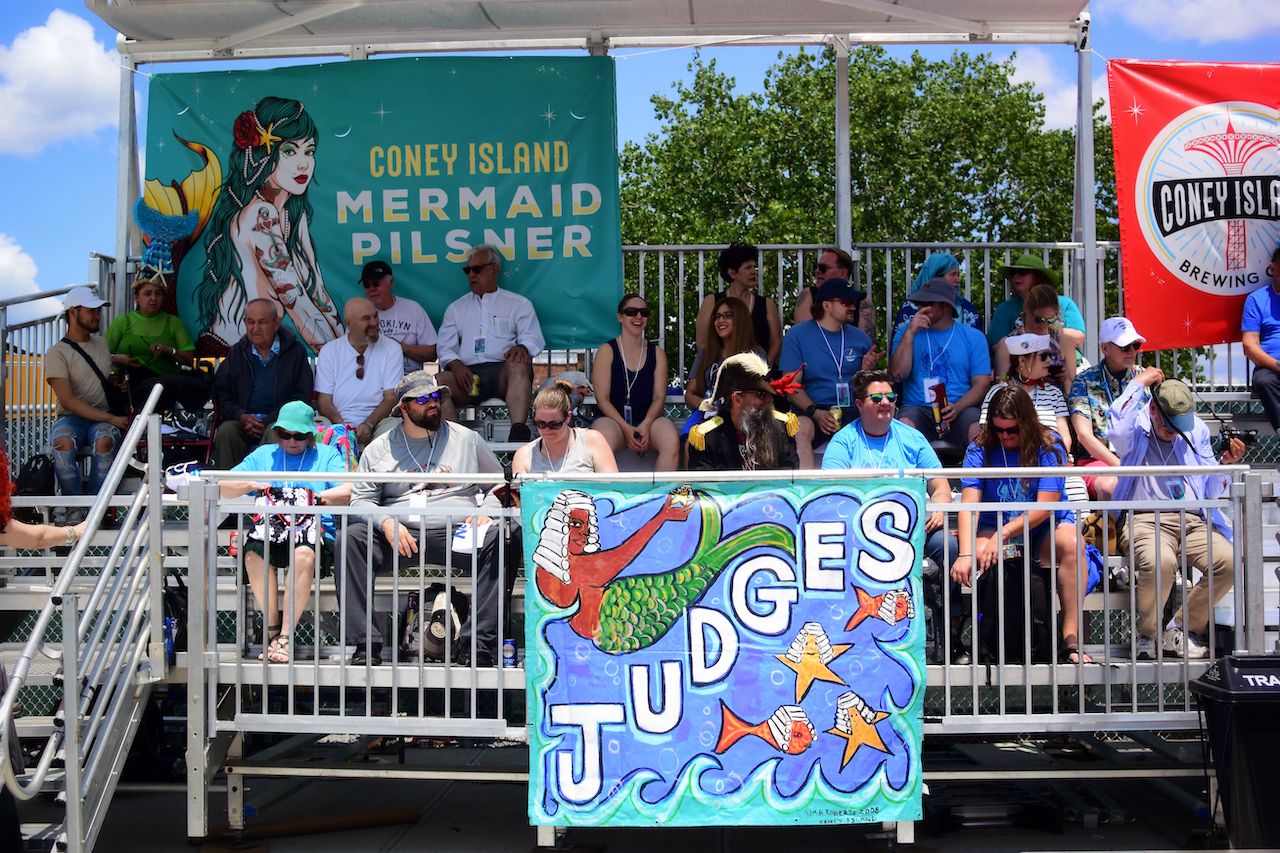 As the parade marched on, judges rated costumes and gave commentary. 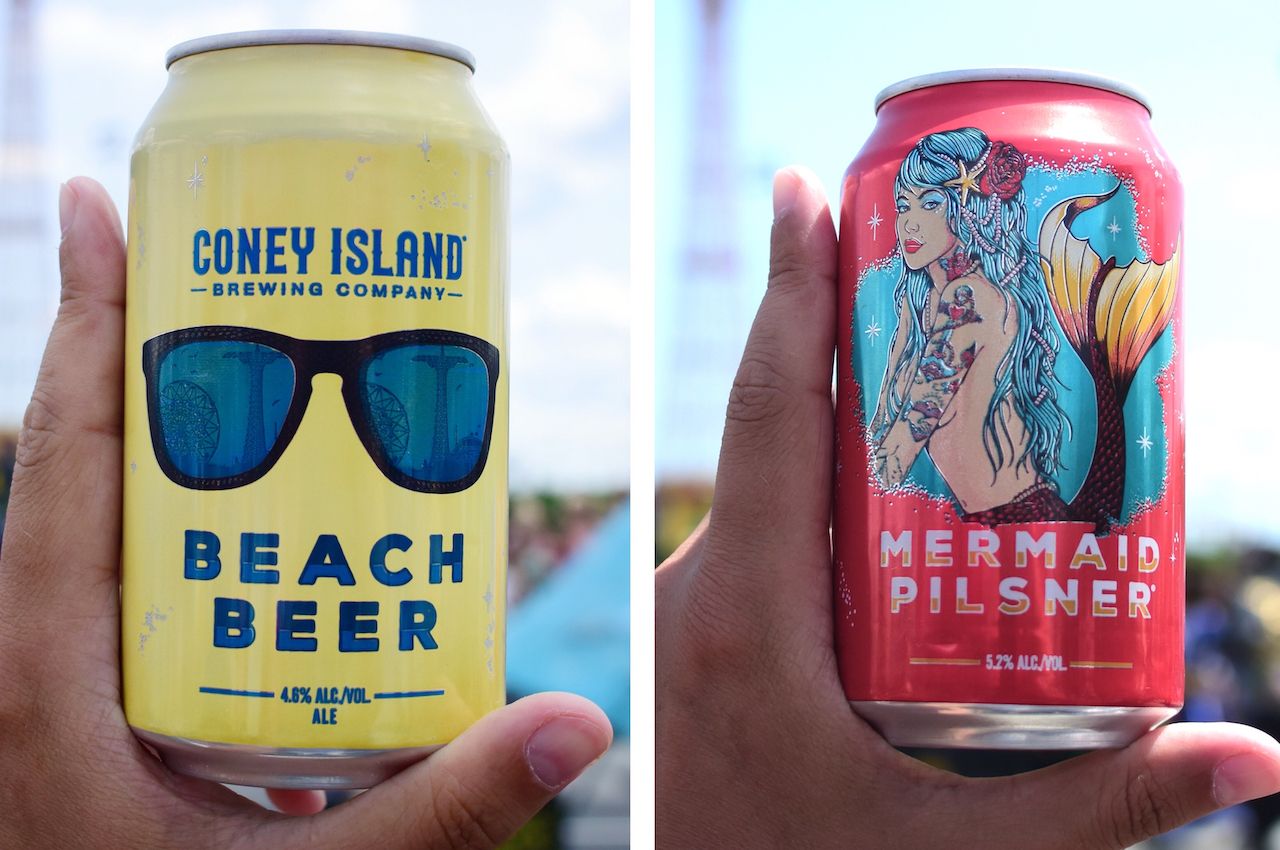 And what is a parade without appropriate refreshments?

LGBTQ TravelThe 20 Most Magical Pride Parades in the United States
Tagged
Art + Architecture Events
What did you think of this story?
Meh
Good
Awesome

This Bewitching Historic Cemetery Is Looking for an Artist-in-Residence

10 Things That Will Happen To You After Moving To Brooklyn