Parking garages are generally the antithesis of art. At best, they are functional slabs of concrete that allow you to avoid circling the streets looking for a space. At worst, they’re underground dungeons of exhaust where every floor looks the same and you spend hours looking for your car.

But in the 21st century, many cities are looking at parking garages as ways to enhance their respective landscapes. Airport parking comparison site Looking4.com teamed with architecture and design mavens Architizer to find garages around the US for just such garages. Places that had both intriguing and functional designs, as well as added to the streets they sat on. The result are these 10 garages, which are currently up for voting on the site’s Coolest Parking Spots in the US contest. So once you’re done reading through here, feel free to go online and vote for your favorite. 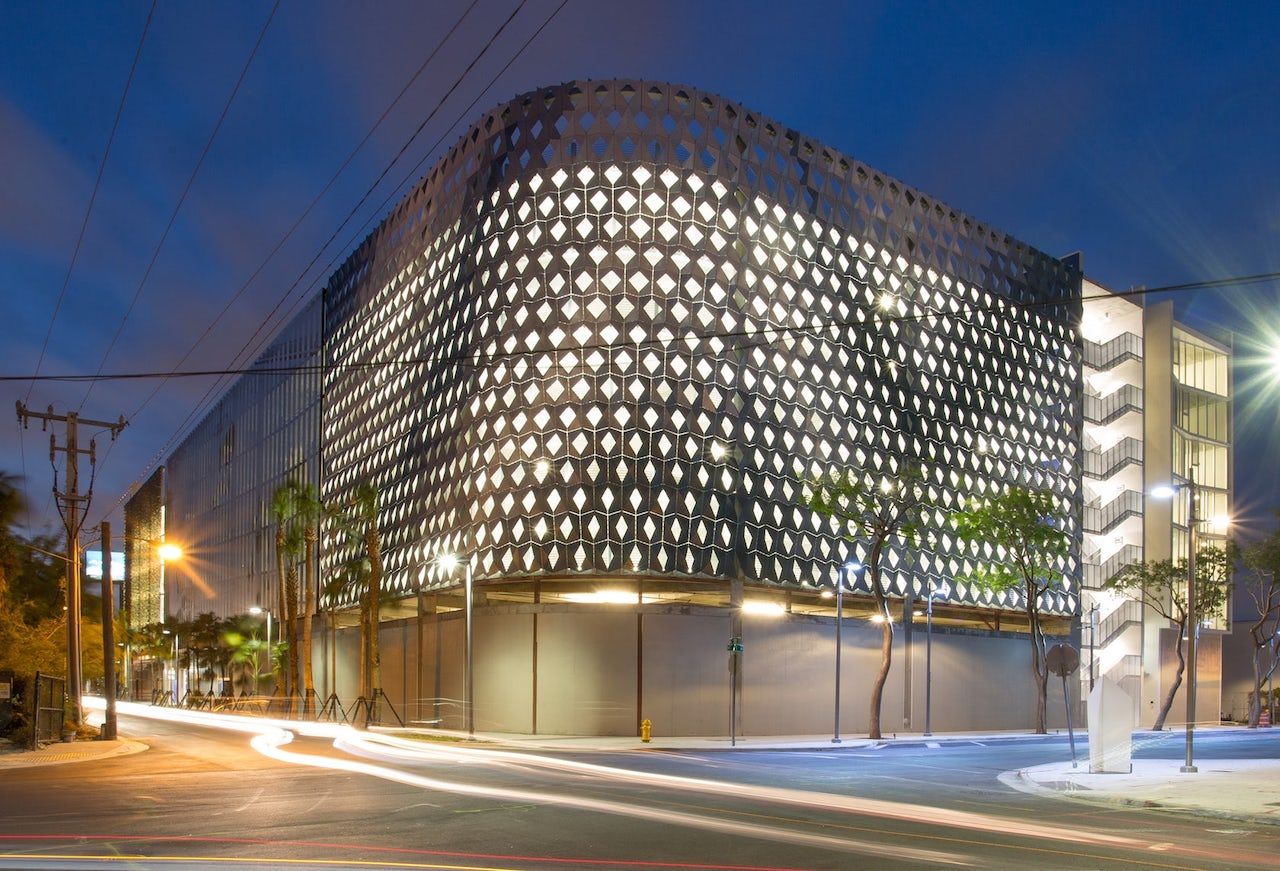 Much like architects in the days before air conditioning had to design Floridian buildings for ventilation, so did IwamotoScott Architects consider a pleasant cross breeze an integral part of design. Knowing Floridians like nothing less than getting into a hot car on a muggy day, the architects digitally created a large metal screen with folded aluminum apertures, letting in air from all directions while still providing shade.

The outside panels make the garage appear different from every angle, and though it hasn’t been credited with causing any accidents yet, it’s the kind of building that makes motorists hold their gaze. As it’s the main parking structure in Miami’s chic Design District, the City View Garage serves as an aesthetic beacon to the neighborhood. And stands as another global example of Miami’s dedication to modern architecture. 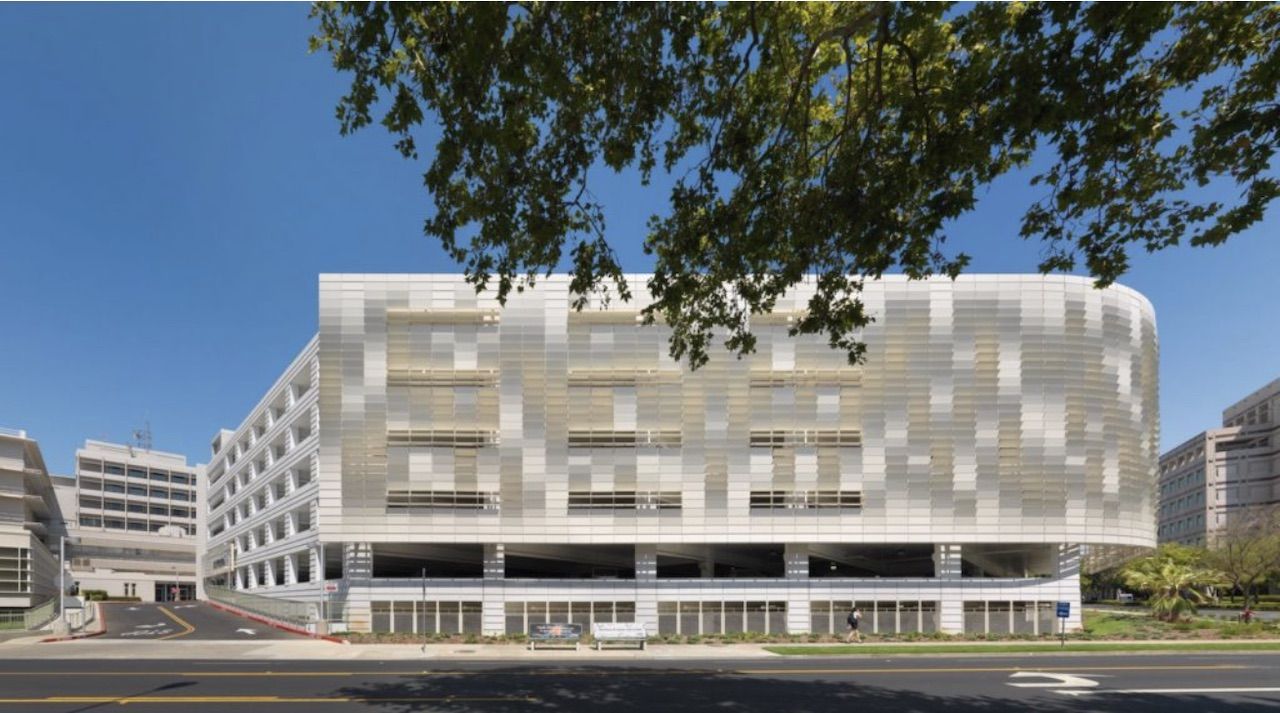 The blazing Sacramento sun has been the bane of many a River City motorist, creating glare and heating their cars to ungodly levels in the summer. But this garage on UC Davis’s Sacramento medical campus uses the abundant sunshine to illuminate the garage with natural light. The exterior is covered in 3,740 aluminum fins set at varying angles, allowing sunshine in to the garage while still keeping it cool. The fins also give the building a unique appearance from the outside, a rare masterpiece of form and function. 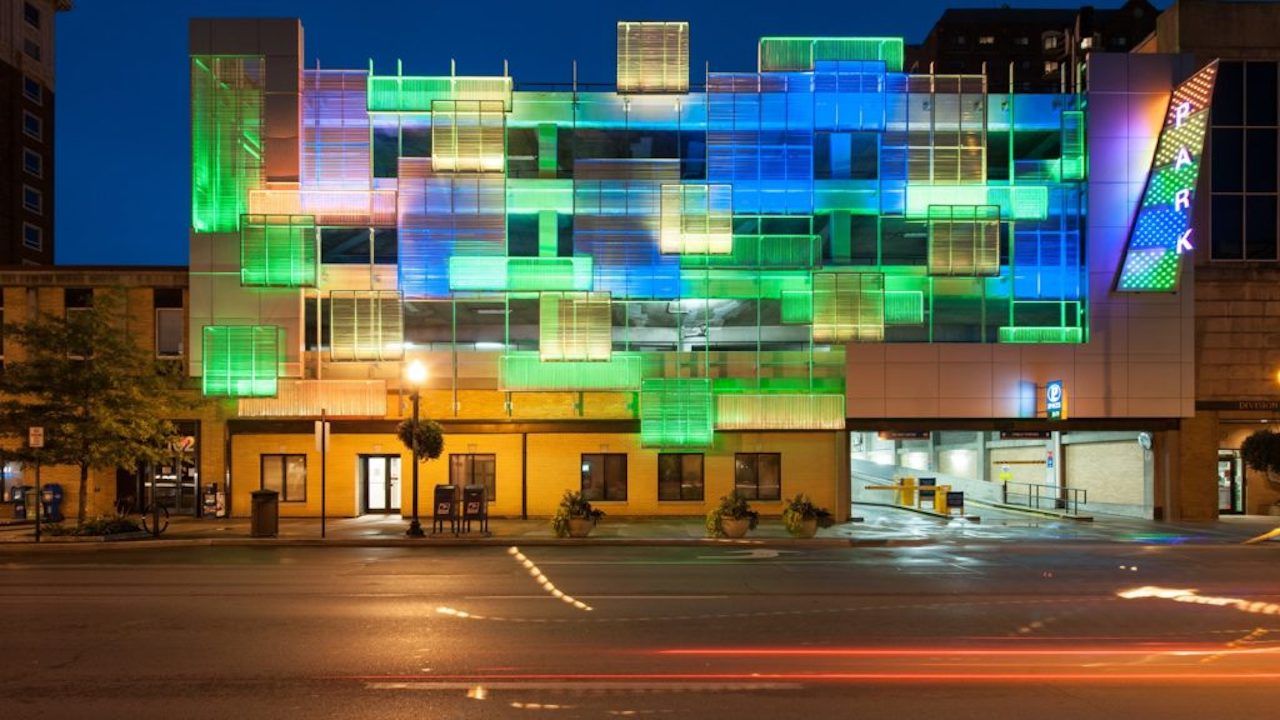 Much like the city itself, Lexington’s Helix garage has taken itself from a nondescript, 20th century relic and turned itself into one of the most impressively modern attractions in the country. Instead of simply giving the garage its requisite structural updates, the city took the Helix renovation as a chance to give Lexington a permanent work of art. Thin steel panels were suspended over the garage, giving its facade the look of a black-and-white modern art piece by day. But at night, the panels light up in differing color schemes, adding a heavy dose of vibrance to the city’s streets. 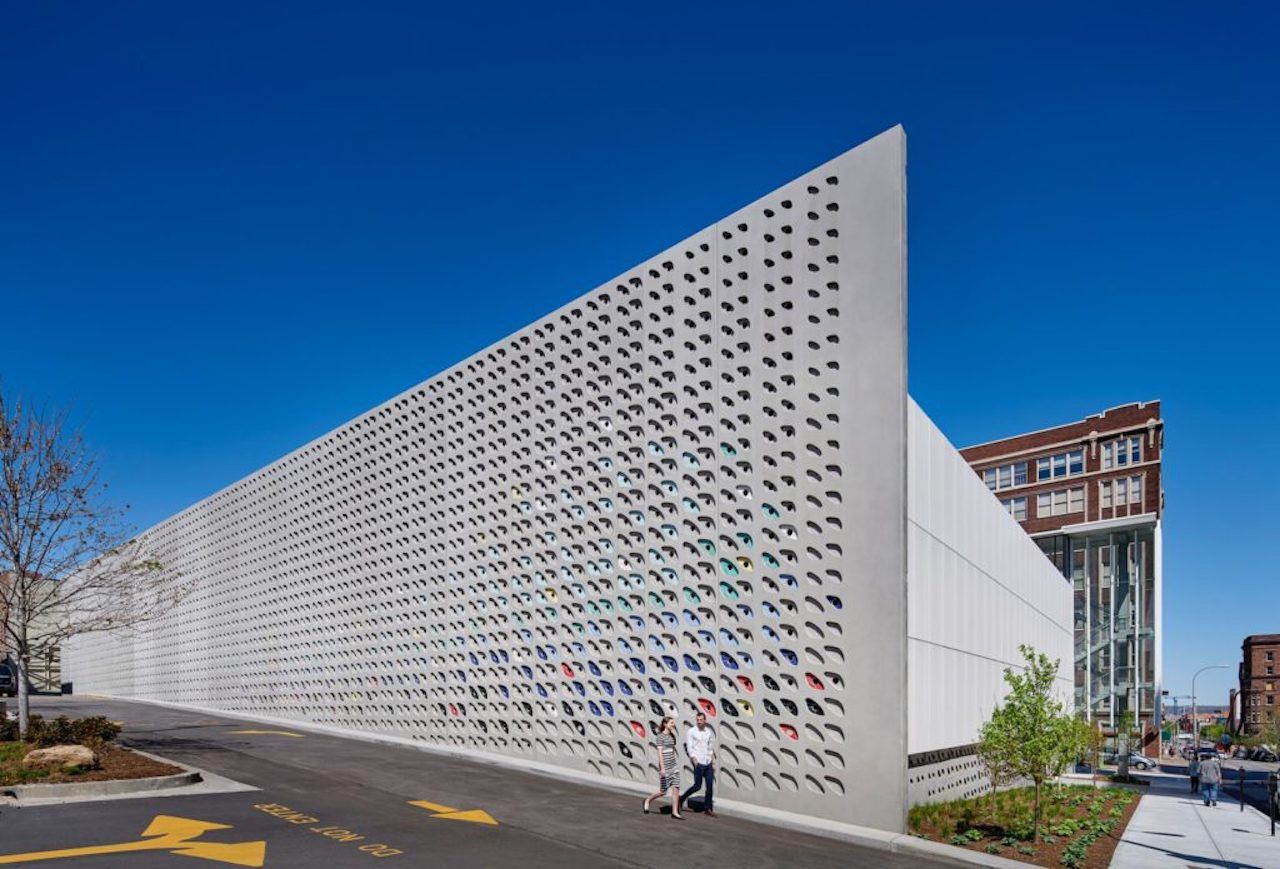 A colorful addition to Kansas City’s classic collection of brick buildings, this small garage is the creation of artist Andy Brayman and BNIM architects. The exterior is slotted with 600 ceramic inserts of differing hues, giving passers-by something new to look at every time they’re in the neighborhood. Brayman used architectural software to help design the space, a true testament to technology’s ability to create great art. 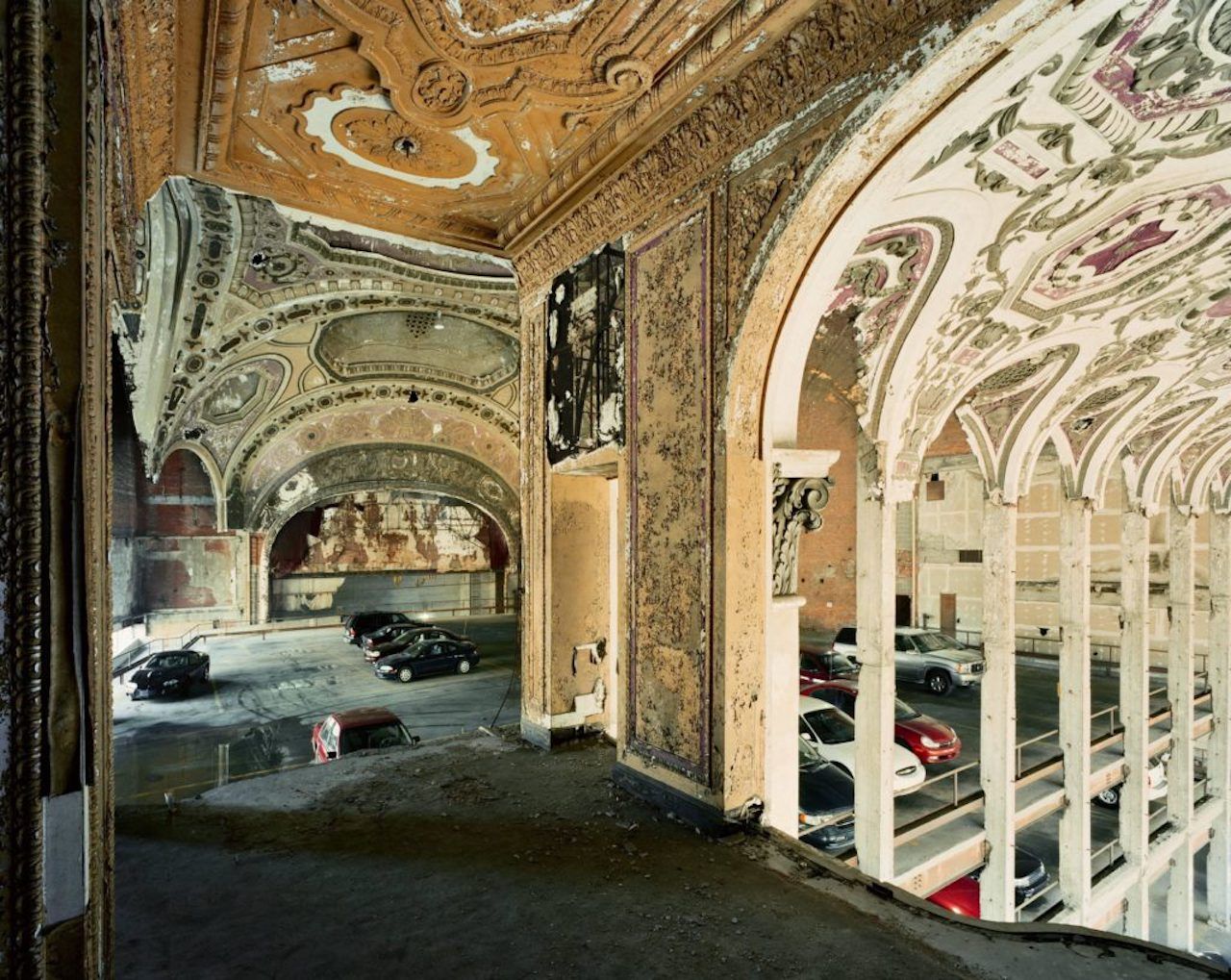 Nobody rehabs old relics like Detroit, and perhaps its greatest testament to reinventing decay is the once-glorious Michigan Theatre. In the Motor City’s heyday, this theater was a 4,000-seat palace that housed symphonies, operas, and black-tie galas. After falling into disrepair in the 1970s, it was recently gutted and turned into a 160-space parking garage. It may well be the only parking garage in the world where you can park your Lincoln under fading porticos and peeling ornate ceilings. It’s a grand example of what Detroit once was and how its creative spirit is putting it back in the forefront of the American conversation. 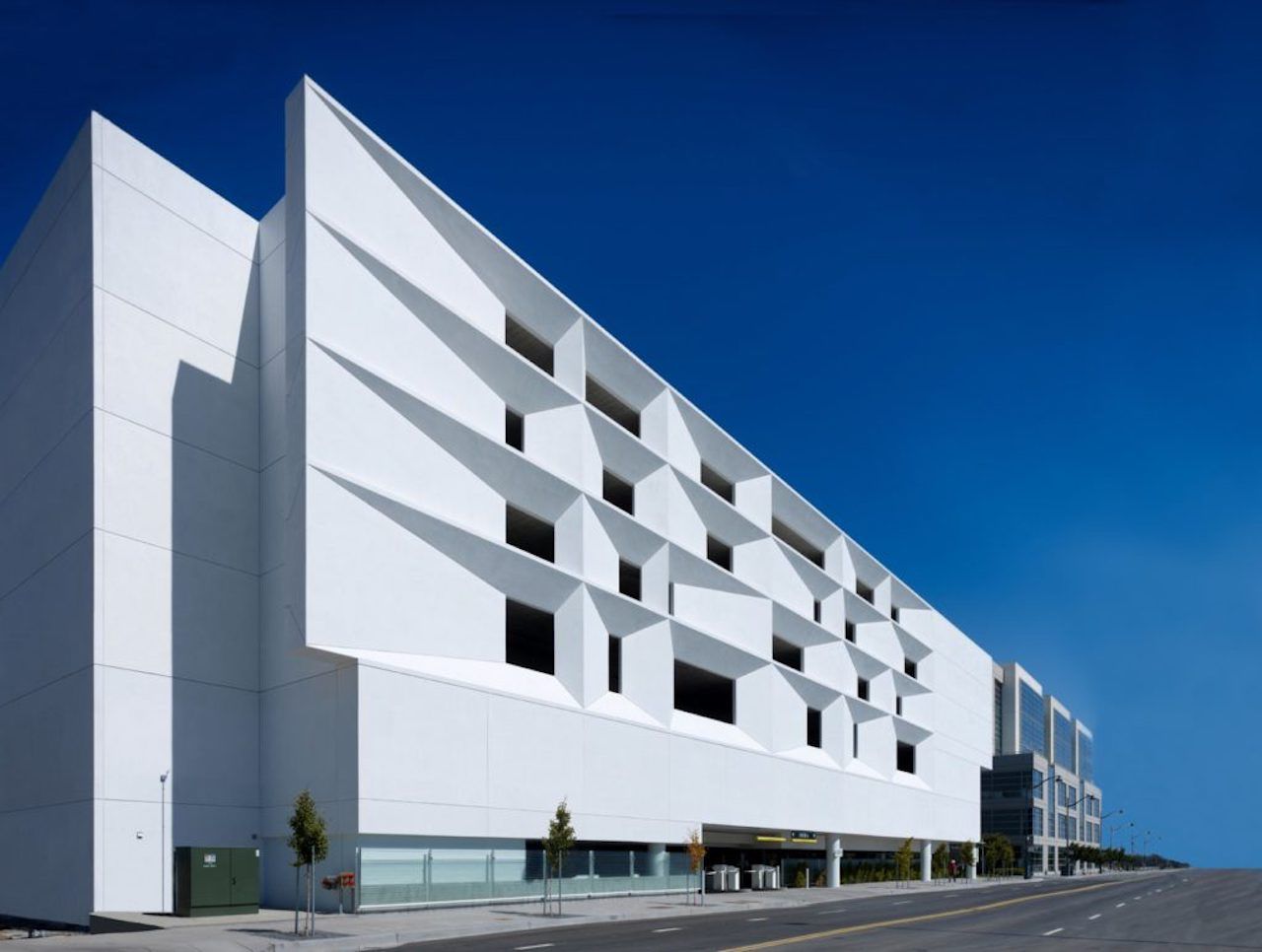 San Francisco’s last bastion of large-scale development may well be in Mission Bay, where the Golden State Warriors will move into their new home next year and this cutting edge parking garage opened in 2009. Each side of the garage looks different, from pixelated renditions of classic California scenery on the north and east sides to varying-sized white windows on the south side. The southern exposure combined with the creative use of shadows makes this façade the most interesting to photograph, although the neighborhood views from the pedestrian bridge might be just as photogenic. 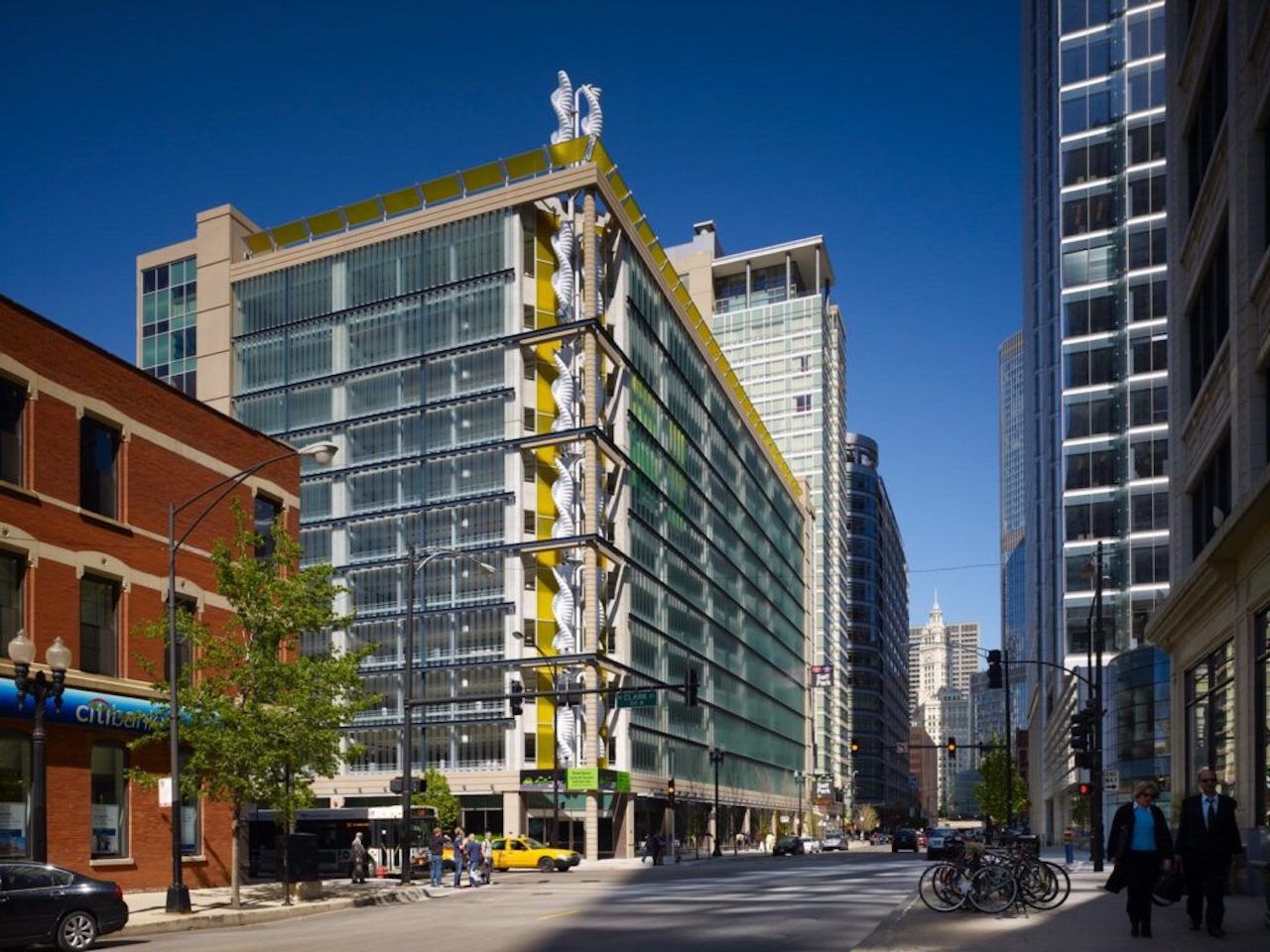 Odds are this River North parking garage is doing more for the environment than most people. Start with the wind turbines, built to take advantage of the Windy City’s frequent gusts. They not only power the garage but also return power to the local grid, all measurable through a reversible meter.

It also has a cistern to collect rainwater, electric car plug-ins, and panels at each elevator bank offering tips on how to live a more sustainable life. Some might argue that not driving in the first place would be a good start, but if you’ve gotta use your car, this garage will make you feel a little better about it. 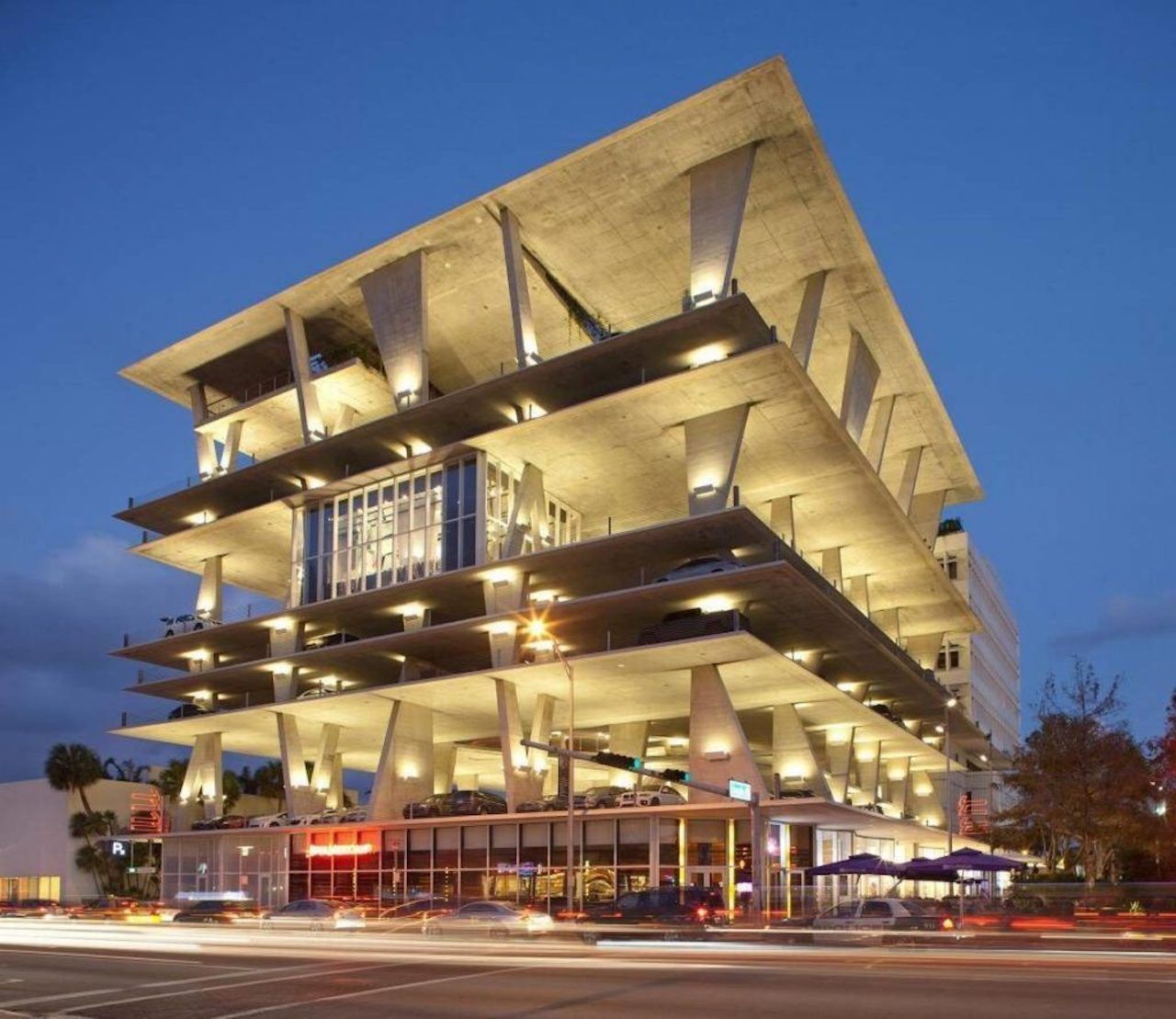 If 1111 is truly the magic number of love, then it would stand to reason that a parking garage emblazoned with those numbers would be a massively popular wedding venue. Well, that and the fact it offers the best publicly accessible views of Miami. This Herzog & Meuron-designed structure has no walls at all, giving every space a view of Miami Beach, the Atlantic Ocean, or the city skyline.

The ceilings range from eight- to 34-feet tall, allowing the garage to also hold an event space, a penthouse apartment, and retail on the ground floor. Though it’ll cost you anywhere from $15-$50 to park there, the view is almost worth it. Especially when you can enjoy it from the air-conditioned comfort of your car. 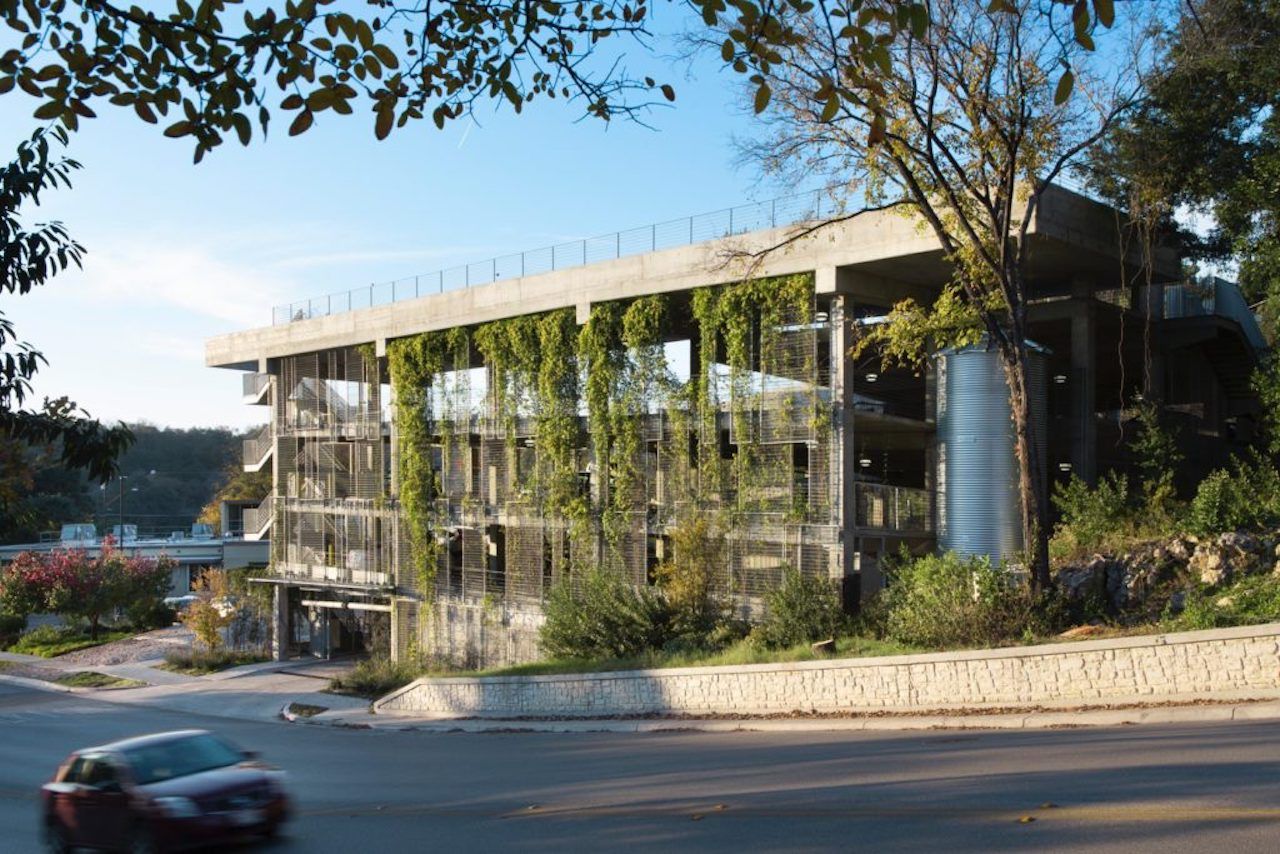 If you’re not paying attention, you could easily drive right past this garage on North Lamar Boulevard near Pease District Park. That’s because the award-winning structure almost camouflages into its surroundings, draped in thick vines climbing along steel screens. The roof leans even further into the car park motif, offering a water detention pond that plays home to local birds and plants. On a hot summer day in Texas, it’s an odd piece of concrete that can actually feel cooling. 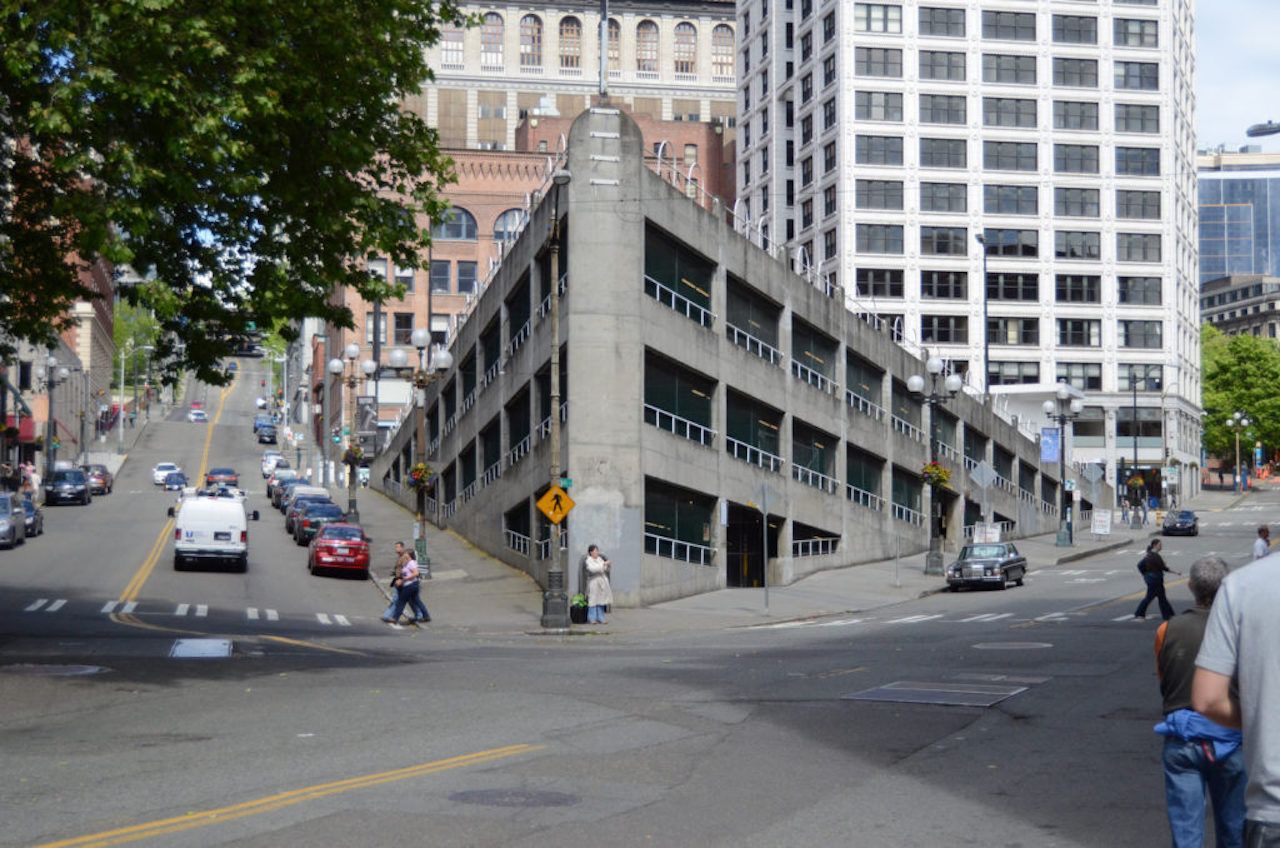 Though it might lack the color or modern architecture of others on this list, no garage does more with its topography than Seattle’s famous sinking ship. Situated on the steep side of a hill where James Street hits Yesler Way at an acute angle, the flat decks of the triangular garage give it the look of a sinking ship’s bow. It sits right in front of Seattle’s iconic Smith Tower, the oldest skyscraper in the city, and though the garage only dates back to 1961, it’s still rumored to be haunted.

Train TravelThe 7 coolest subway stations from around the world that are worth stopping at
Tagged
Art + Architecture
What did you think of this story?
Meh
Good
Awesome