At first glance, there’s nothing especially appealing about carp. The gray-green bottom feeders trawl the muddy depths of freshwater rivers, lakes, and ponds all over Eastern Europe (in the United States, carp is considered an invasive species and rarely eaten). The fish are hardly an attractive symbol of wealth and prosperity. Yet, thanks in large part to dietary restrictions imposed by Catholicism, carp are a beloved presence at Christmas dinner, and their scales highly prized.

In China and Japan, it’s a different story: Carp are known as koi, decorative and revered fish which populate ponds in temples and gardens, their shimmering red and gold patterned bodies resebelming jewels in the water. It’s no wonder that in Chinese and Japanese culture, koi can be signs not just of wealth but of career success and marital happiness — they’re sometimes even compared to powerful dragons.

Clearly, the humble carp is no fish to scoff at. This powerful creature — if you’re superstitious at least — can conjure wealth, good fortune, and even a promotion if you’re extra lucky. Here are five countries where carp symbolize good luck. And a word to the wise: Next time you eat carp, you might want to hang on to its scales. 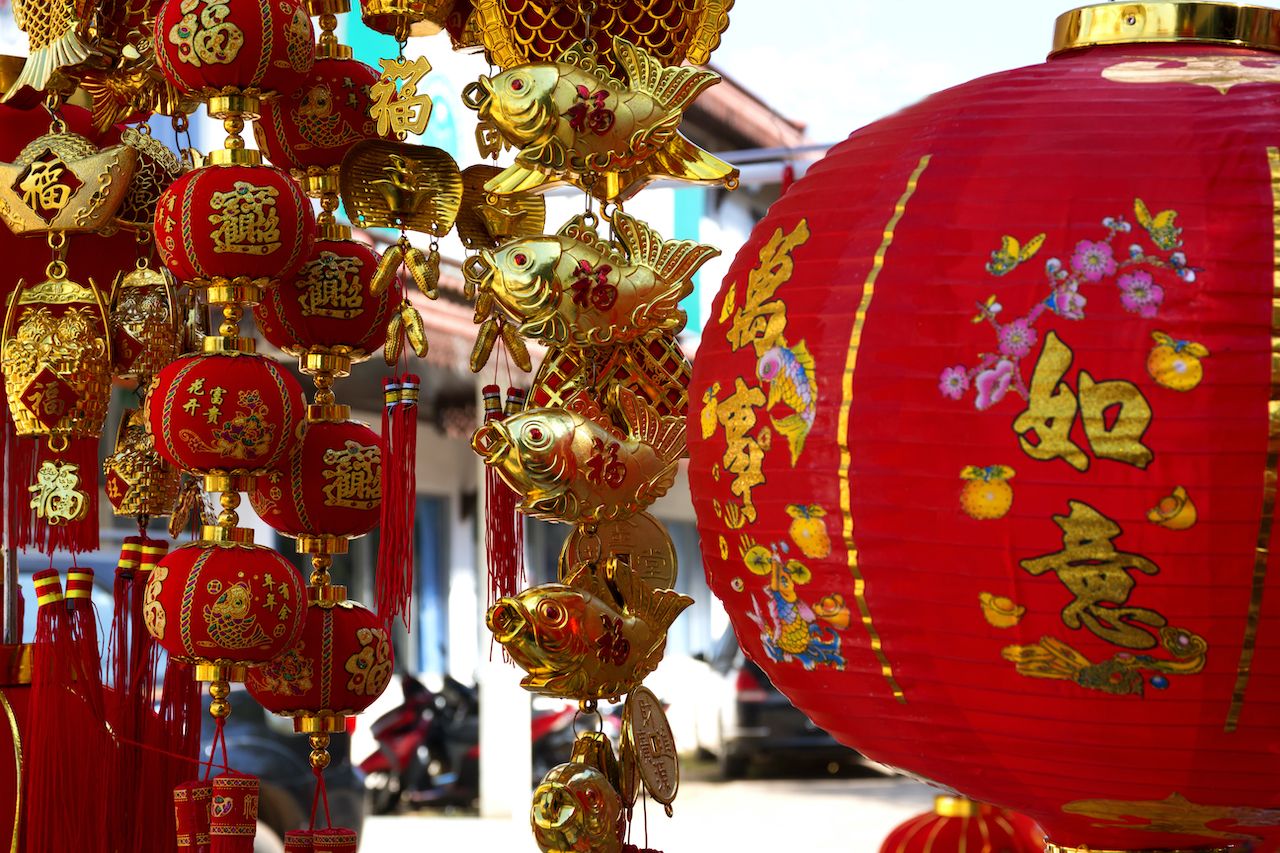 In China, the word for carp (liyu) is a homophone with a similar pronunciation to the word for “enormous profits.” The “li” in the name also means power or strength. Carp are revered for their ability to jump through the Dragon Gate waterfall on the Yellow River. The image of a carp jumping over a gate or waterfall is considered a metaphor for prosperity and success, especially when it comes to career aspirations. Two carp swimming together — a popular motif on prints and other decorations — symbolizes fertility and domestic bliss. Because of their connection to wealth, carp often appear on red and gold Lunar New Year decorations, and carp is often incorporated into the celebratory feast as well: Eating mud carp — a homophone for the Chinese word for gifts — during Lunar Year festivities is thought to bring good luck. 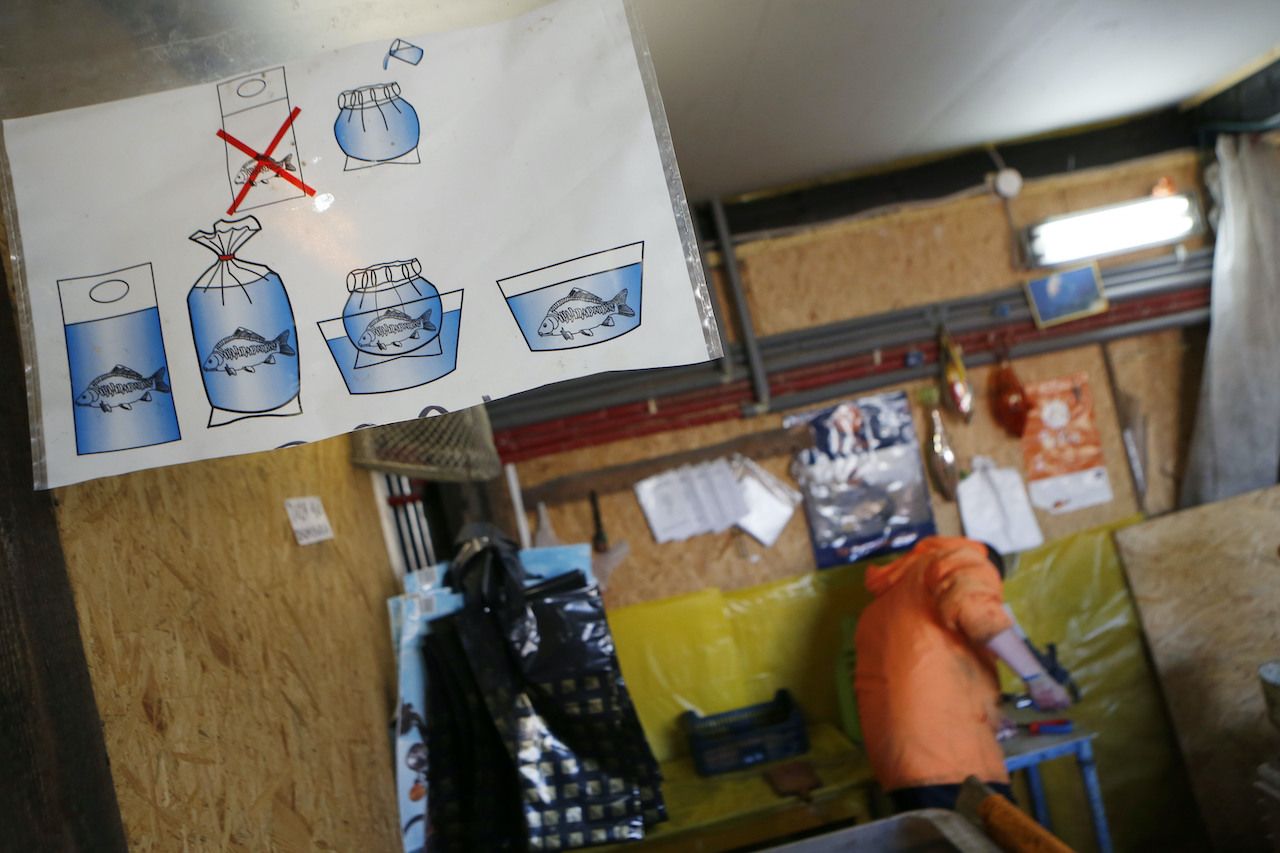 In many Eastern European countries where carp is a beloved cultural symbol, Catholicism is at the root of its rise in popularity: Around the 13th century, Catholics adopted fish as their go-to meal during fasting days when eating red meat was not permitted (for the uninitiated, Christmas Eve is the final day of Advent, a month long period of fasting among Catholics). But in Poland, reverence of carp came even earlier. Since the 12th century, carp has been considered a fish fit for kings, so much so that fish bred in the Zator region, home to the most famous of Poland’s fish farms, are known as “royal carp.” Carp’s designation as the king of fish might have led to the superstition that keeping the scale of carp cooked on Christmas Eve in your wallet might attract wealth. 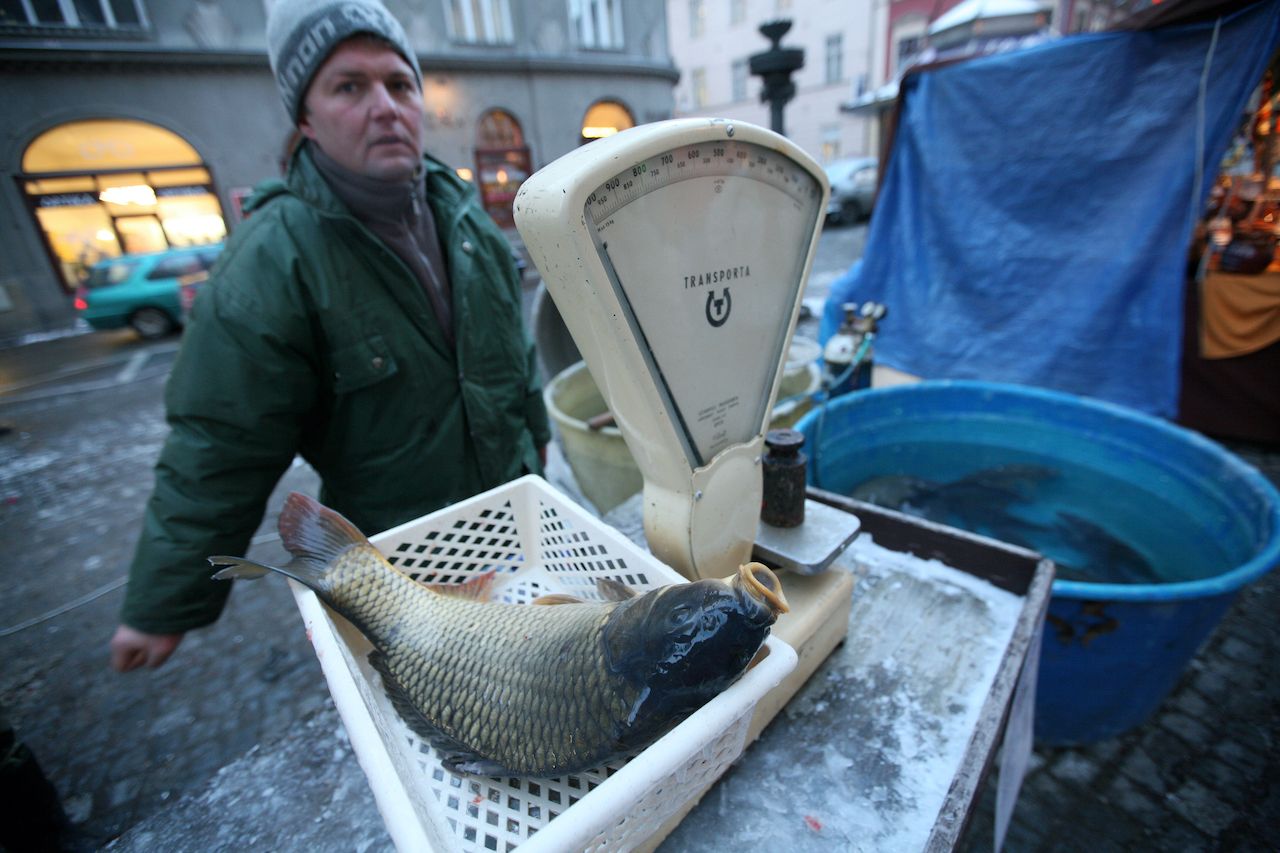 Carp is the centerpiece of Christmas Eve dinner in the Czech Republic. It’s typically served in soup or it’s fried and accompanied by a side of potato salad. Like their Eastern European neighbors, people in the Czech Republic have been eating fish around Christmas for centuries, but holiday recipes that call for carp specifically did not appear (or were at least not recorded) until the 19th century.

Before the guests sit down to dinner, one scale from the fish is sometimes placed under the dinner plate. Then, once dinner has concluded, the fish scale is retrieved from under the plate and carried around in the recipient’s wallet until the following Christmas in order to attract prosperity and wealth. According to NPR, nearby Slovakia performs similar rituals around carp on Christmas Eve. 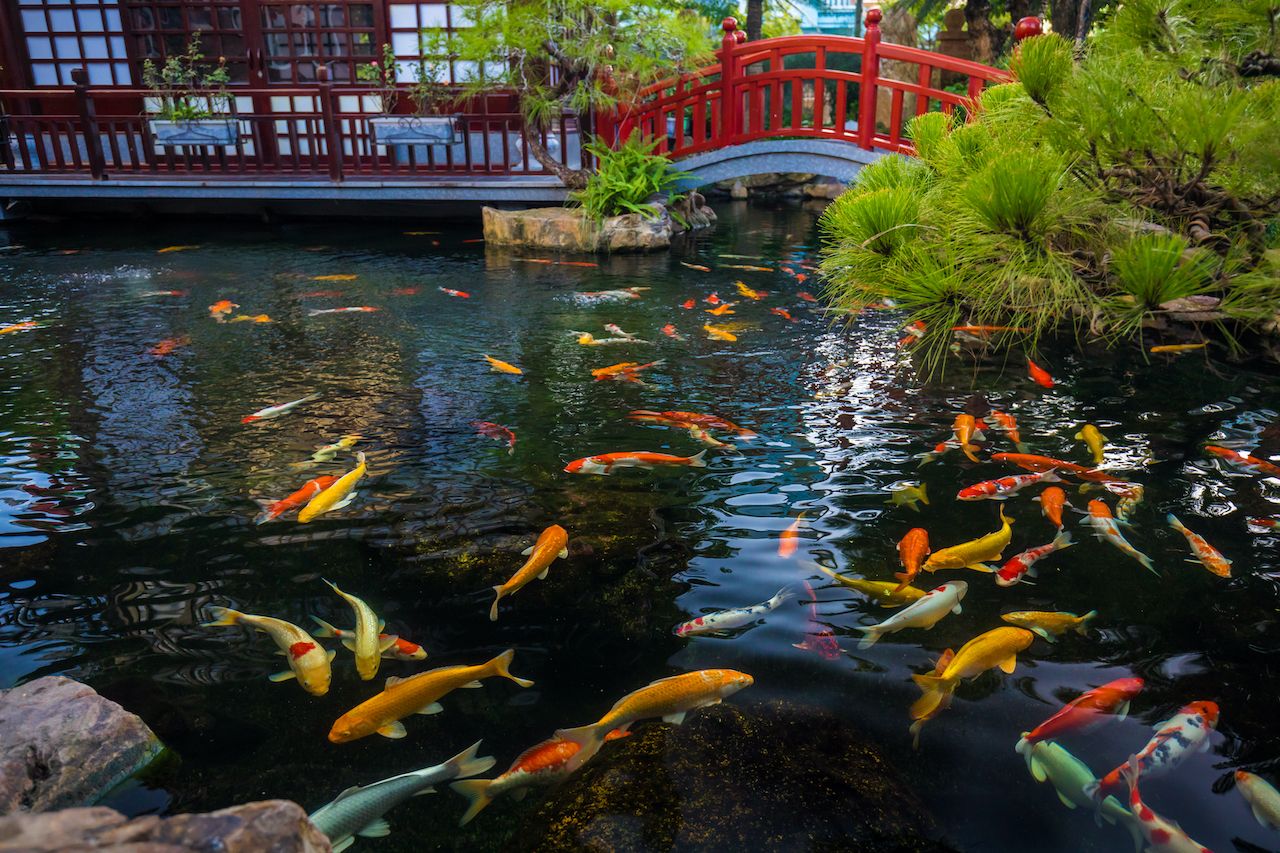 In Japan, carp are known as nishikigoi (or by their more common name, koi) — a title which means “living jewel.” Ornamental koi breeding began in the Niigata Prefecture around the late 18th century, though they were first introduced to Japan from China as a food source in the first century. Today, glittering schools of lustrous red and gold koi can be seen in the ponds decorating Japan’s many gardens and temple grounds.

The fish are an important cultural symbol. According to legend, a group of koi fish swimming upriver encountered a waterfall. After 100 years of jumping, the koi finally reached the top of the waterfall and were transformed into dragons. The koi have since been regarded as a symbol of perseverance, ambition, power, and strength, in particular because of their determination to swim upstream. On May 5, Children’s Day, families hang koinobori — Japanese streamers in the shape of multi-colored koi fish — in front of their homes, to symbolize each member of the family in the hopes that the children will adopt the characteristics embodied by the koi. 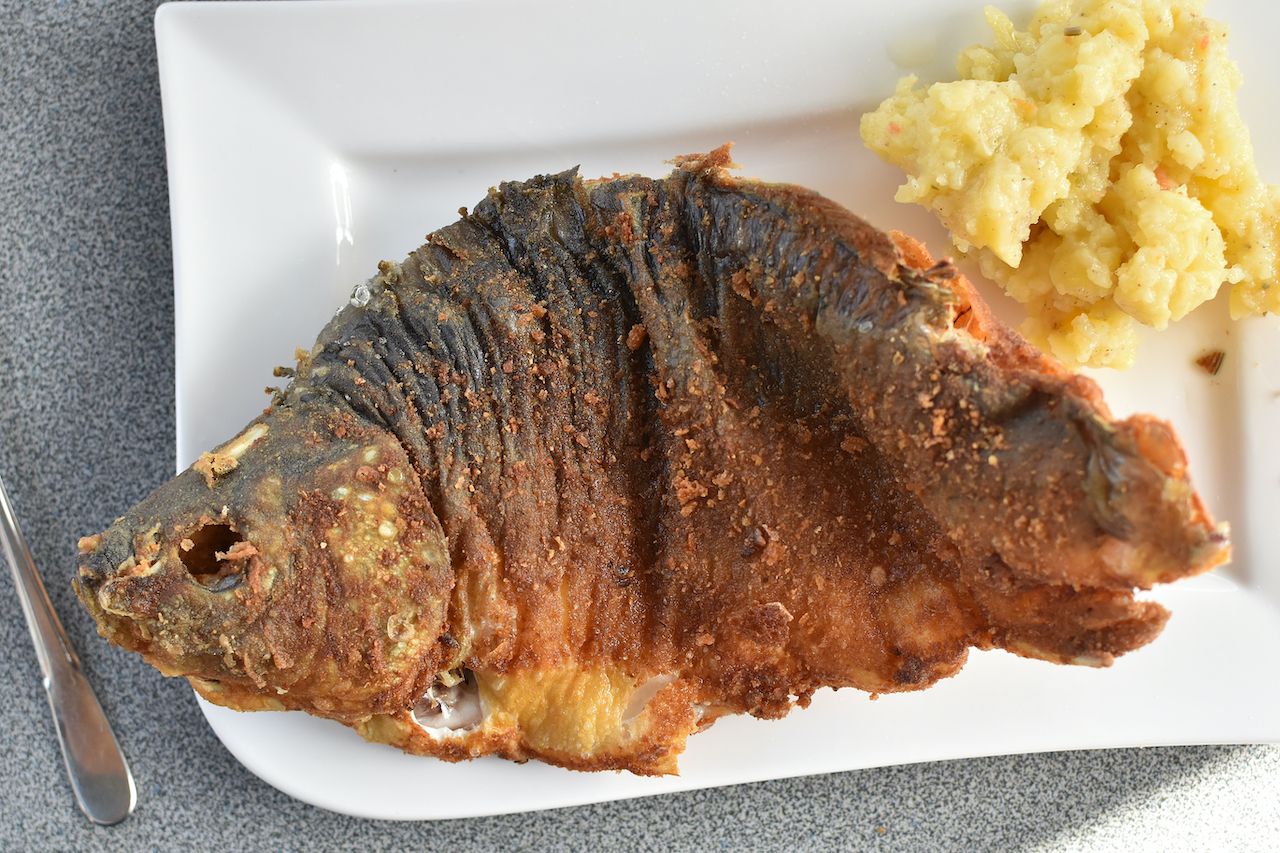 On New Year’s Eve, known as Silvester in Germany, carp — either baked, pan-fried, grilled, or smoked — graces the dinner table. People sometimes put scales taken from the carp before the meal, which resemble coins, in their wallet to attract wealth throughout the year. In Eastern Germany, it’s also customary to bury carp bones at the foot of fruit trees, to encourage an abundant harvest in the spring. Nearby Austria practices similar traditions.

Food + DrinkWhy Some Polish Families Keep a Live Carp in the Tub Before Christmas
Tagged
Culture Food + Drink
What did you think of this story?
Meh
Good
Awesome