The English are famous for their desserts. There are numerous options, from small cakes served with tea, to towering glasses of whipped cream and fruit, to traditional recipes with a history nearly as long as modern Britain itself. Most of the country’s famous desserts from the past depend on sweetened bread and butter along with cream. Alcohol often plays a major role, as well, whether for soaking, as a main base ingredient, or for starting a fire at the serving table. These are the 11 traditional, classic, and famous English desserts and how they came to be.

The syllabub is not the most common nor popular dessert in England today, but it was once ubiquitous. It’s made by adding alcohol to thick cream, causing it to curdle, and then sweetening the mixture and whipping it. The name comes from Sillery wines from France, which were the original alcohol of choice for the dessert. The intoxicating side of the syllabub varied over time, but the name stuck, as Felicity Cloake writes in The Guardian. A mid-1600s version uses cider, which is weaker than wine, while another uses port, which turns the mixture an off-putting purplish color.

Syllabub has yet to experience a revival, but it’s worth keeping in mind and giving it a try when presented with the chance. 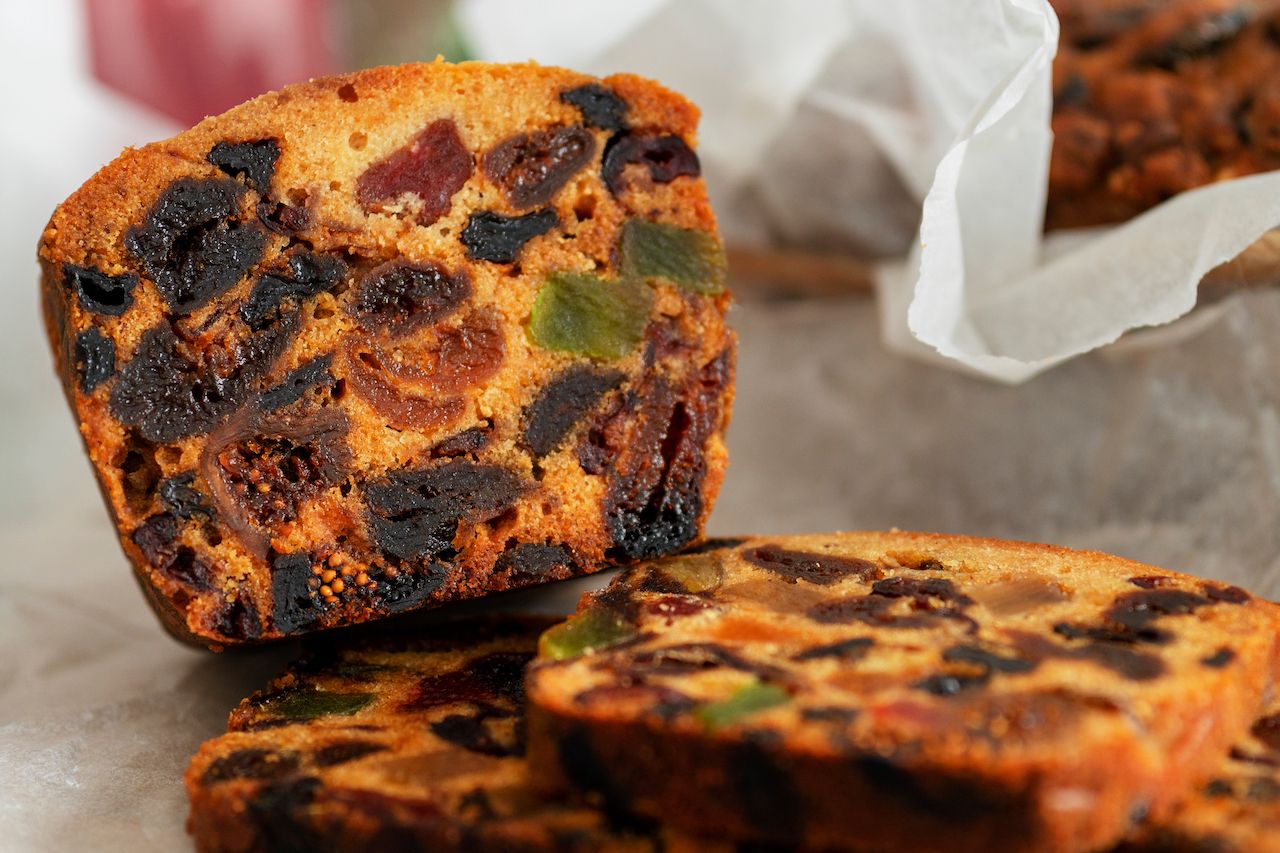 Fruitcake is among the most maligned desserts, as seen by the many disparaging remarks made around Christmastime every year. But it’s proven to be one of the most adaptable foods over the past couple of centuries. The ancient Romans made a version of fruitcake with pomegranate, pine nuts, and raisins in a barley mash. Europeans in the Middle Ages added honey, spices, and fruit. It was regularly eaten for sustenance, kind of like a very early version of today’s hiking bars loaded with chocolate chips and dried fruit.

Fruitcake’s connection to England started in the 1400s with fruit from the Mediterranean, according to What’s Cooking America. In the 1700s, people made nut-filled fruitcakes during harvest and didn’t eat them until the next year as a symbol of good luck for the following harvest.

The Victorian era from the mid-1800s to 1900 brought fruitcake to the spotlight. It’s said that Queen Victoria herself waited a full year before digging into a fruitcake because doing so showed “restraint, moderation, and good taste.”

In part due to this long history, variations exist around the world. Italy has panforte, Germany has stollen, and parts of the Caribbean have rum-soaked black cake.

Today, fruitcake remains popular despite the jokes at its expense. Modern versions contain citrus, currants, raisins, spice, and come in a variety of booze-soaked options, including Cognac, Scotch whisky, and rum. 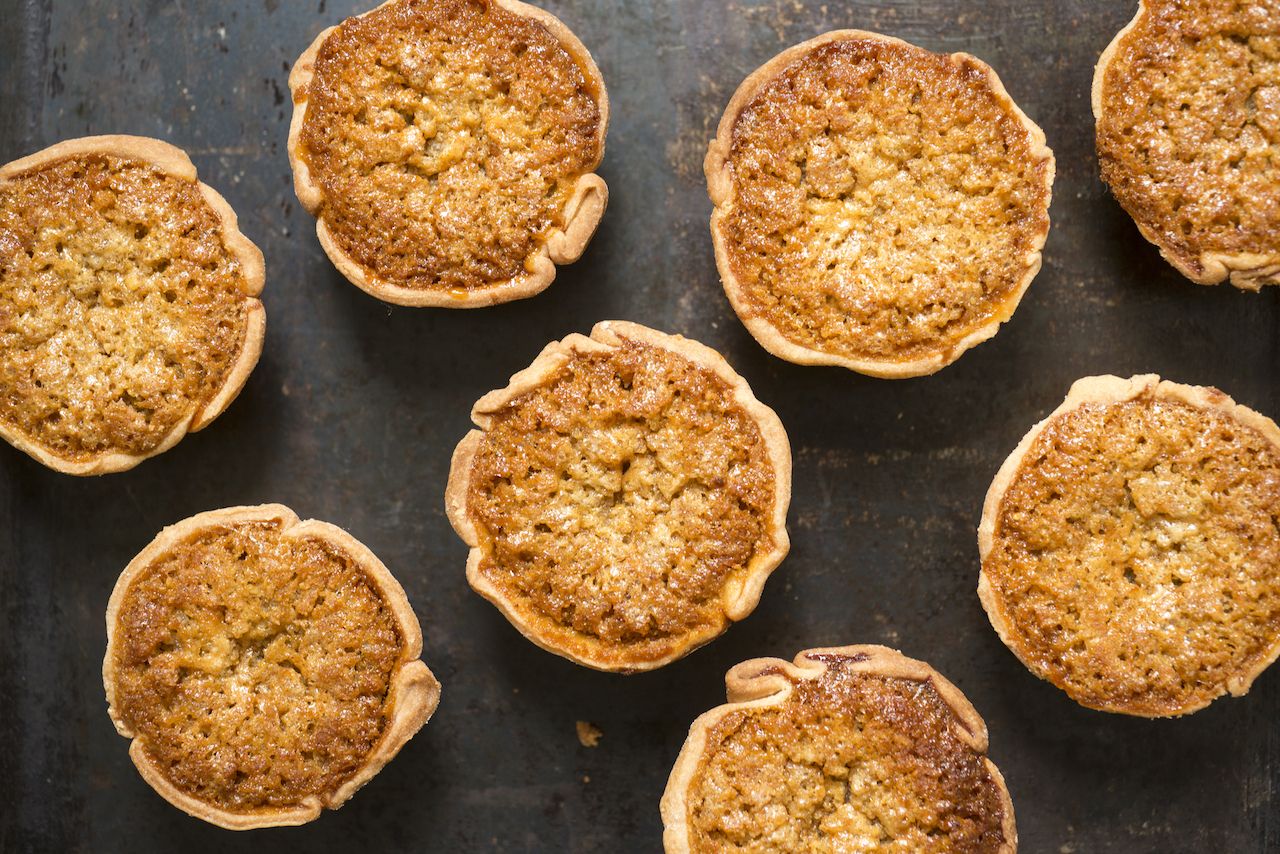 Treacle is a syrup that’s a byproduct of refining sugar, kind of like molasses. This breadcrumb pastry with an open-top middle traditionally relied on treacle for its sweetness, though a synthetic canned golden syrup is often used in modern versions. Treacle tarts are believed to come from the north of England, and one of the oldest recipes (which, naturally, used true treacle) was published in the Newcastle Courant in 1887, according to the Foods of England. 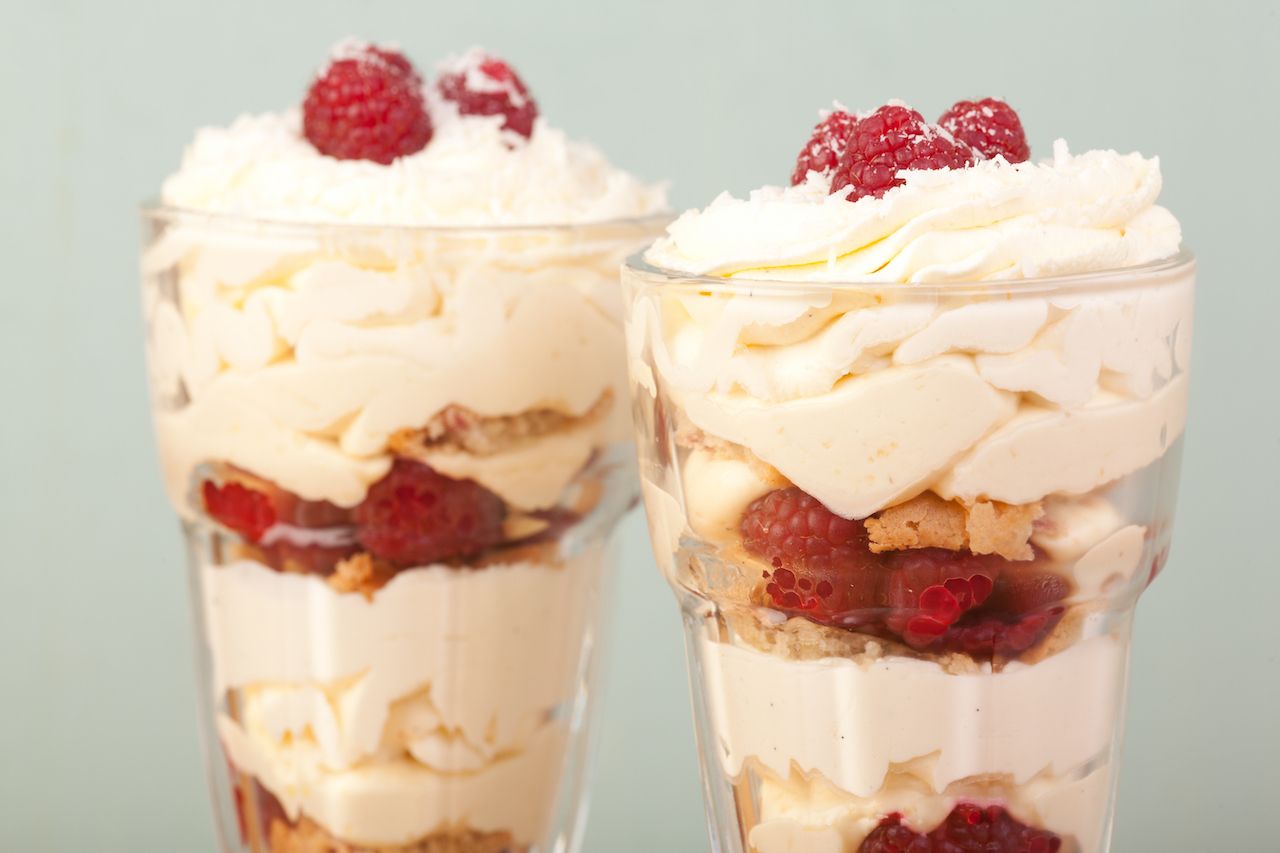 The Knickerbocker Glory is an ice cream sundae that comes in a tall glass filled with layers of ice cream, nuts, fruit, sweet bread, chocolate, and whipped cream. A bright red cherry on top completes the dessert.

There’s a good chance the classic knickerbocker glory wasn’t invented in England. The word knickerbocker was popularized as a nickname for New Yorkers of Dutch descent by Washington Irving’s 1809 book A History of New York from the Beginning of the World to the End of the Dutch Dynasty. It was published under the pseudonym Diedrich Knickerbocker. That surname is also the term for the style of trousers that are tight around the calf and have a wide cut around the waist and thighs.

No one knows when Knickerbocker was first tacked onto the name knickerbocker glory, but Foods of England notes the name of the sundae was in print as early as 1929. Perhaps the dessert’s most recent claim to fame is a mention in Harry Potter and the Sorcerer’s Stone. 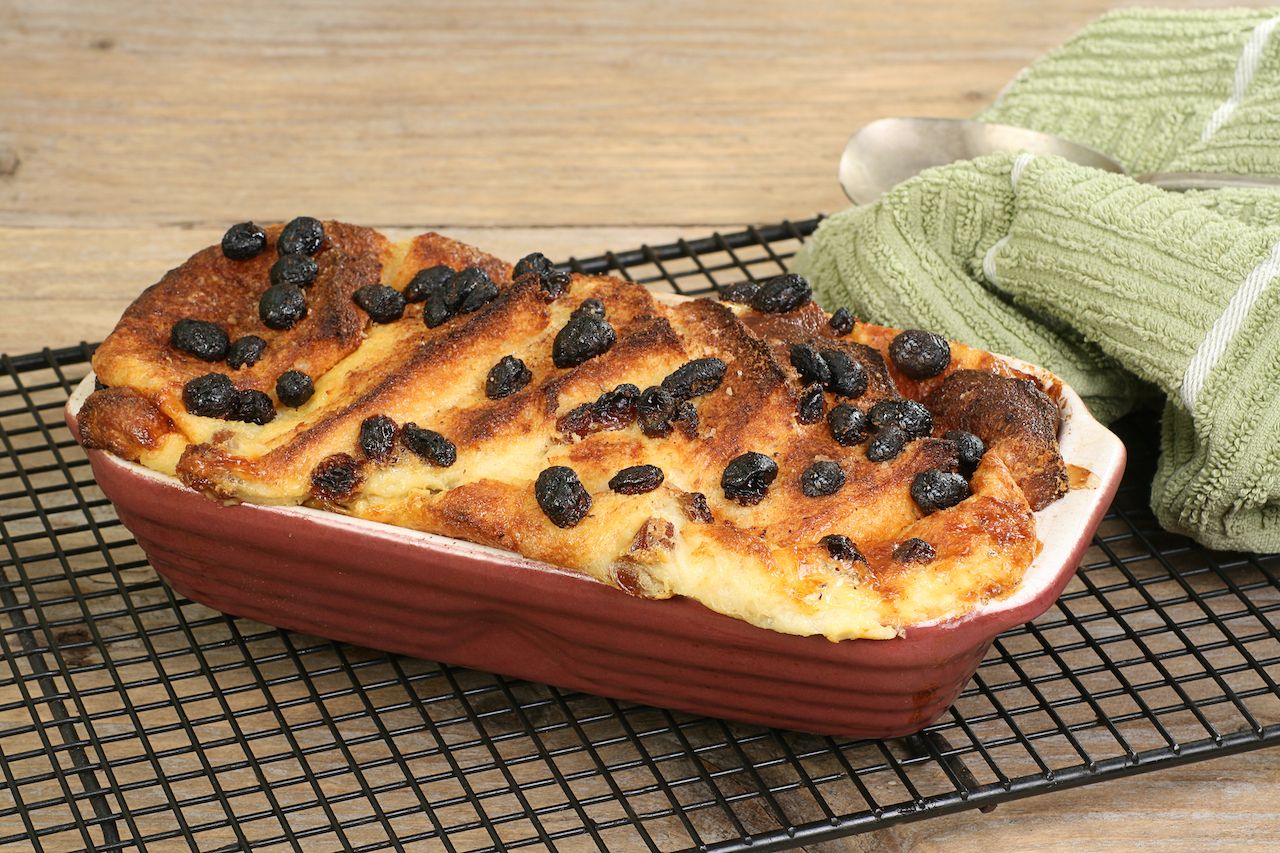 This simple dessert of layers of buttered bread, raisins, spices, and egg custard was one of Princess Diana’s favorites. The earliest recipes date back to the 1700s as a way to repurpose day-old bread, though its low cost (yet big flavor) made it a working-class favorite as well. Fancier versions may add lemon and a splash of alcohol like brandy. For Princess Diana’s version, former Royal Chef Darren McGrady laid out the specific ingredients: raisins, amaretto, white bread (no crusts), butter, egg, vanilla, sugar, milk, heavy cream, and almonds. 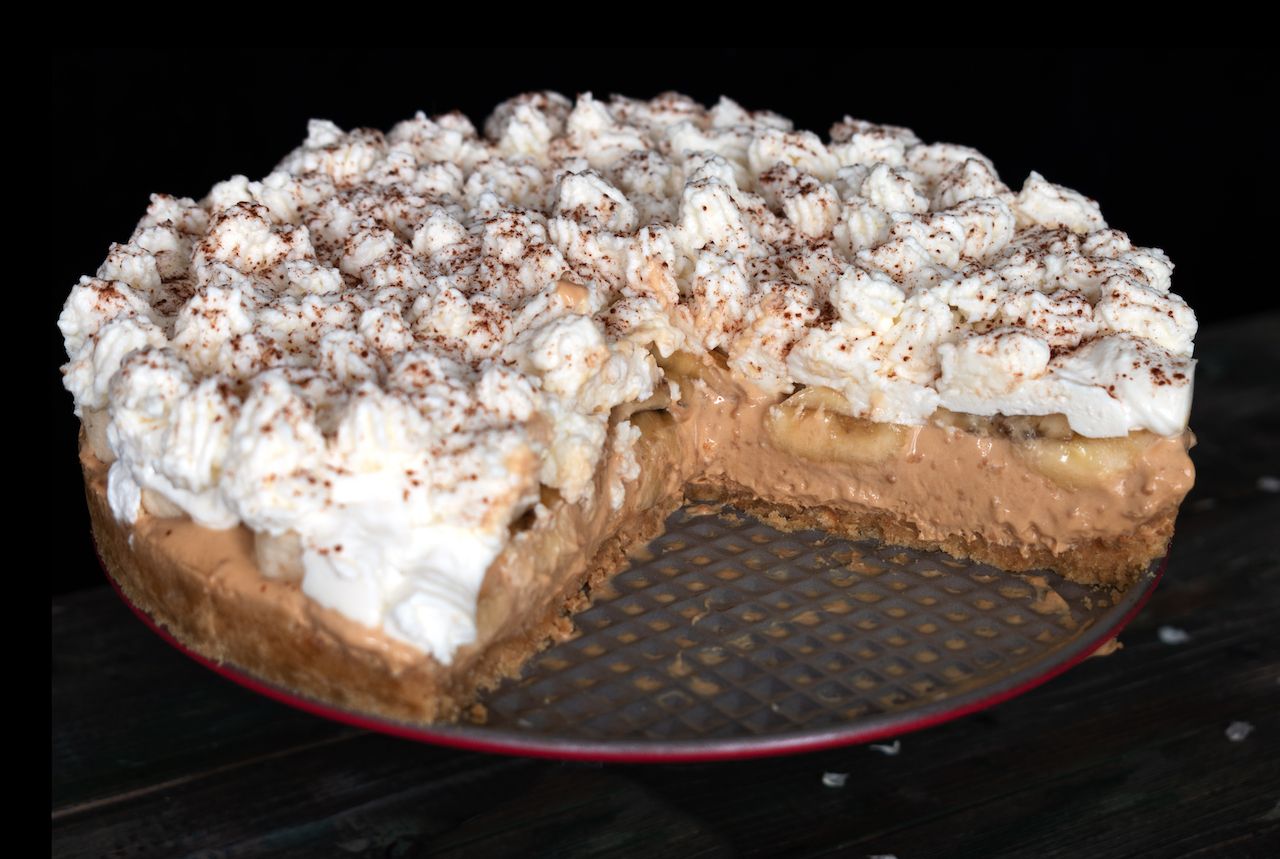 Banoffee pie is made with bananas and toffee, which helped inspire the name, along with a flavorful short-crust pastry and freshly whipped cream. It’s one of the rare foods with a clear origin story. The dessert was created in 1972 by the late British restaurateur Nigel Mackenzie and first served at his restaurant The Hungry Monk in Jevington, East Sussex. Inspiration came from the head chef Ian Dowding, who was a fan of Blum’s coffee toffee pie, which is made with condensed milk and cream.

Banoffee was an instant hit that was imitated elsewhere. It reached complete market saturation when Nestlé printed a recipe on the label of condensed milk cans. No imitations can compare to a banoffee pie made the traditional way, with freshly whipped cream and short-crust pastry, however. 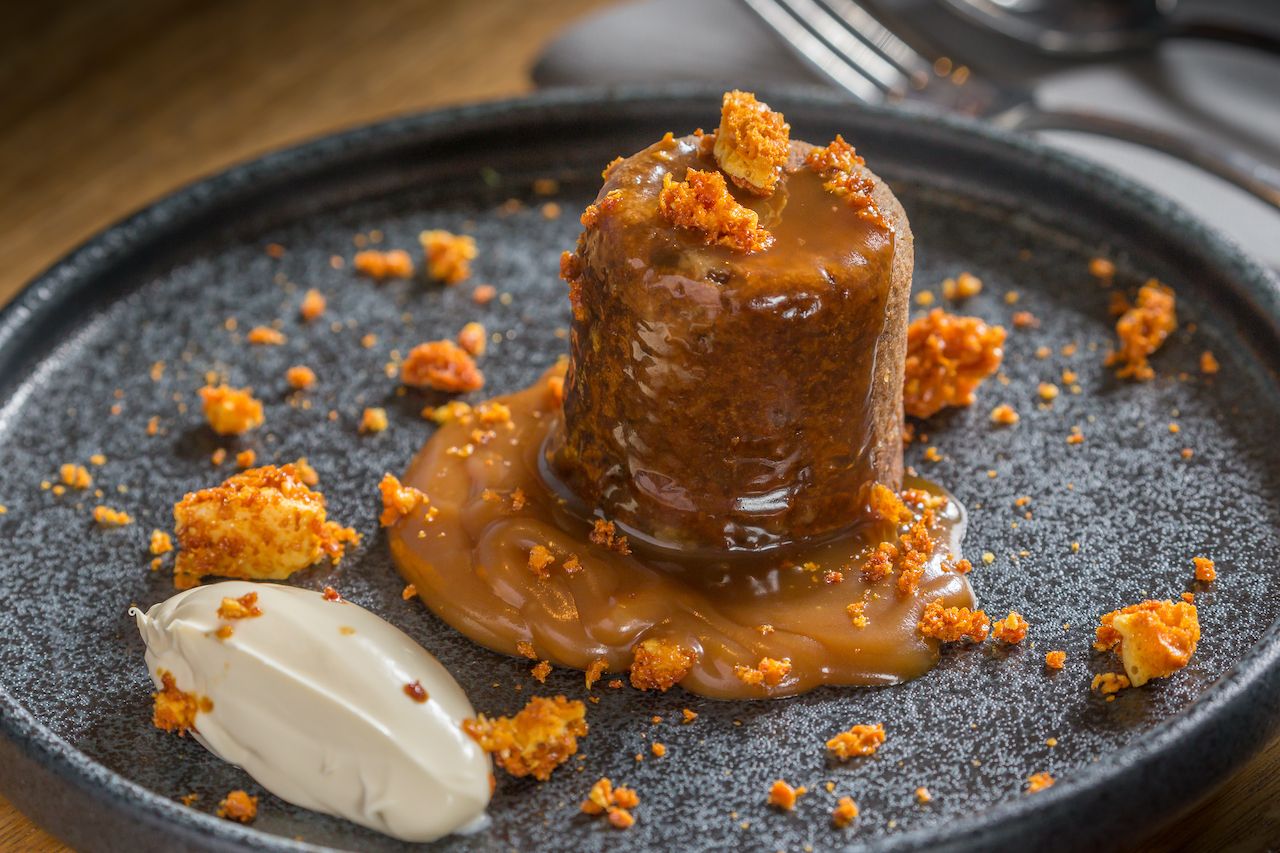 This steamed sweet dessert is made with sponge cake, dates, and a toffee sauce made with butter, cream, and sugar. Ice cream or custard are two optional, but not uncommon, toppings. By some accounts, it was created by Canadian Air Force officers who passed the recipe to a hotel owner in Lancashire while stationed there during World War II. There’s no denying that sticky toffee pudding as we know it today, however, comes from the Lake District of northwest England. Francis Coulson at the hotel Sharrow Bay was probably the first person to prepare the dish, and today it’s a widespread, and widely loved, treat. 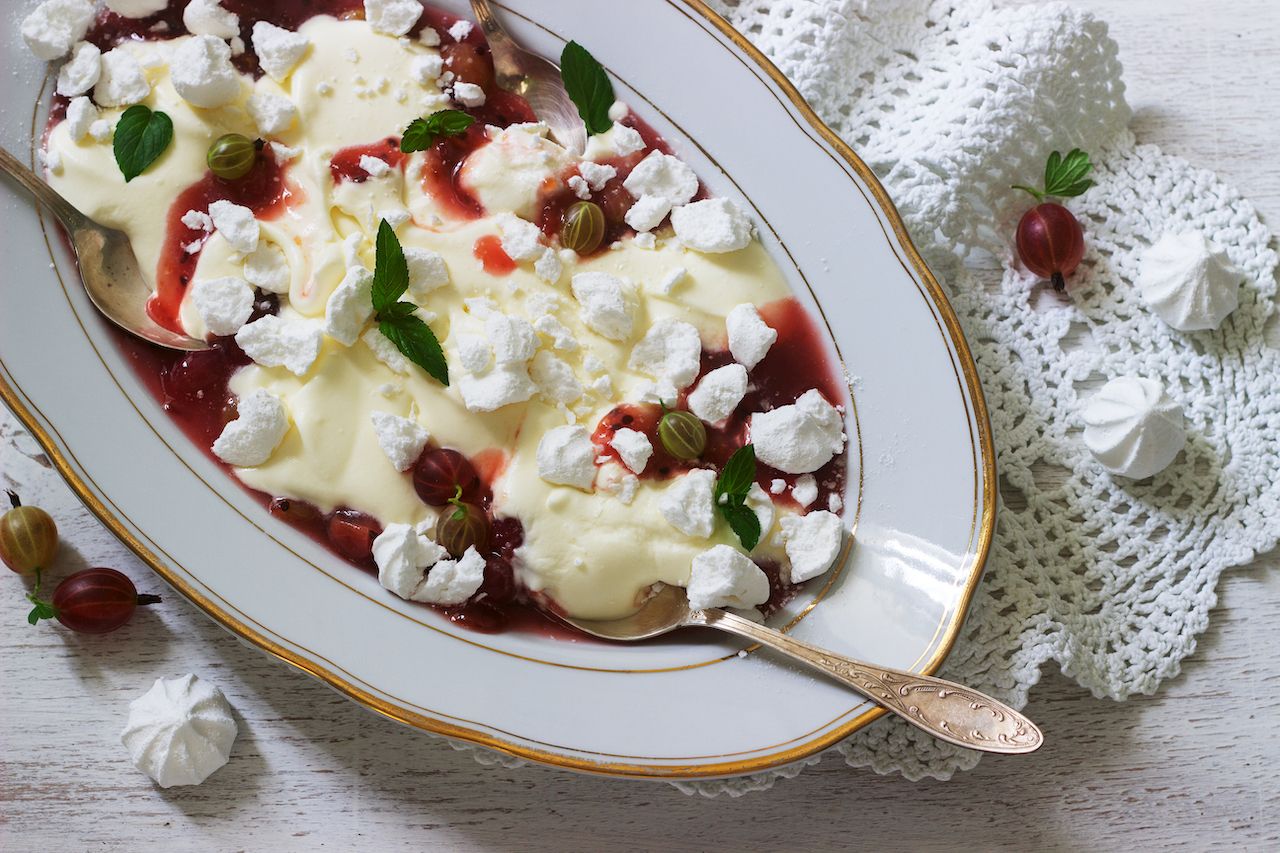 When it comes to English desserts with upper-crust names, Eton mess is the cherry on top. It gets its name from Eton College, the Windsor boarding school for the British elite like David Cameron, Princes William and Harry, and the James Bond author Ian Flemming. In terms of dessert, Eton refers to meringue and whipped cream mixed with strawberries.

According to a cheeky legend, it was created in the 1920s during a cricket match. The chef brought out a prim and proper cake, which was promptly knocked over by a dog. The boys of Eton ate the mess — dog hair and all — regardless. Though a widespread story, it’s not true, and exactly where the Eton mess comes from isn’t clear. What is known is that it’s been around at least since the late 1800s. Arthur Henry Beavan wrote about a menu that included an “Eton Mess aux Fraises” (with strawberries) in his 1896 book Marlborough House and Its Occupants: Present and Past. 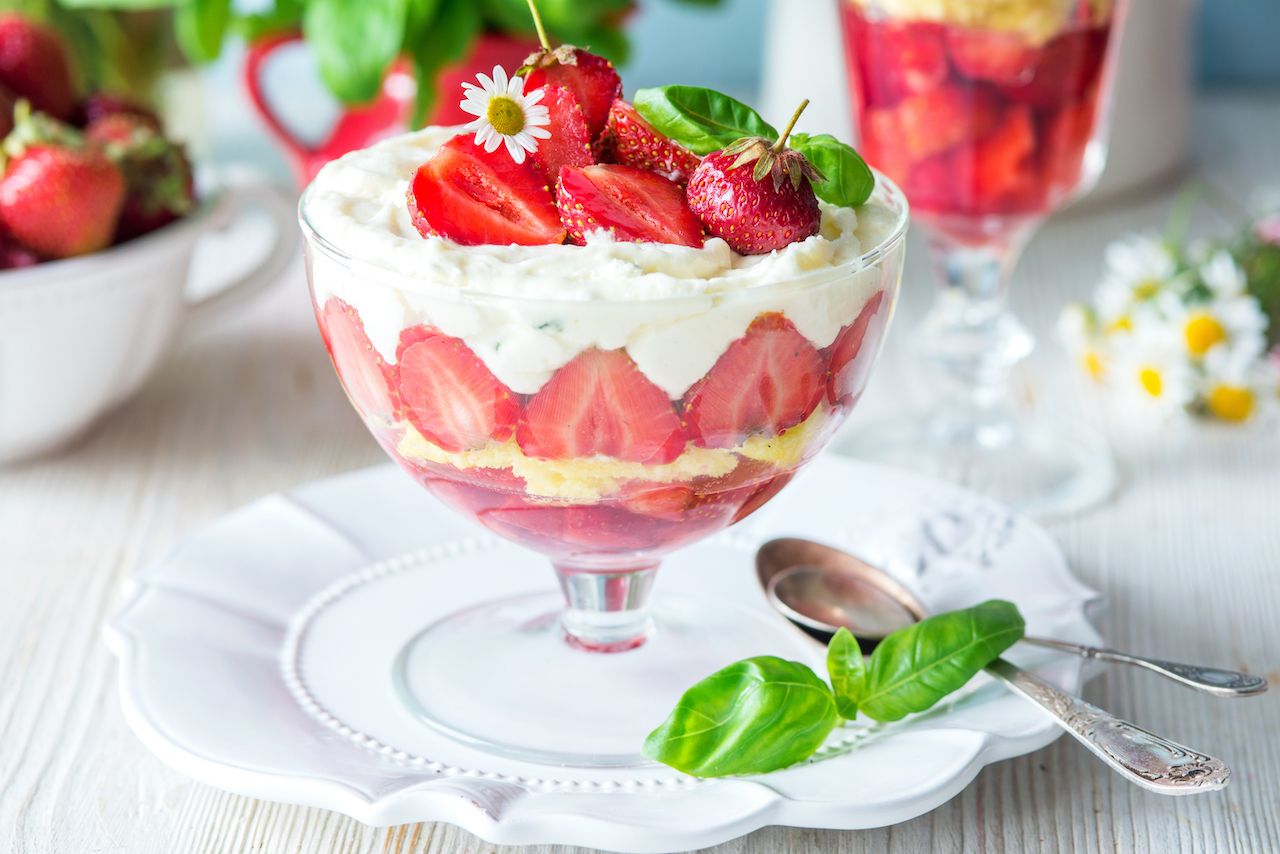 A “trifle” means something irrelevant, but the English trifle is always relevant in the world of the UK’s desserts. It’s made with sponge cake that’s soaked in sherry or brandy, fruit, egg custard, and whipped cream. It’s similar to a syllabub, and the two dishes have a shared history, according to The New York Times. English trifles date back to at least 1598, and the recipe was originally made with cream and rosewater before turning into an alcohol-soaked bread and custard dessert in the 1700s. Today, it’s served in a glass bowl to show off the layers. 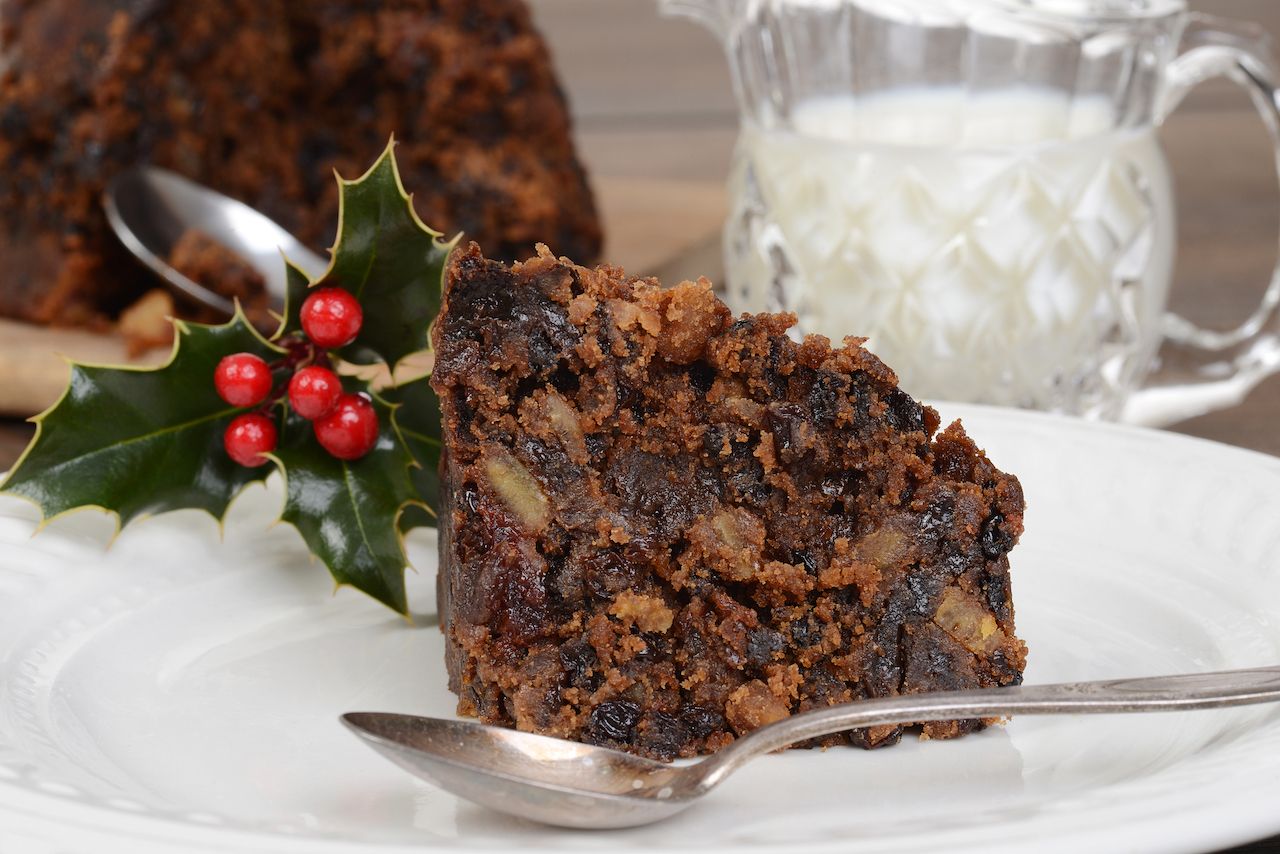 Even people who haven’t eaten figgy pudding are susceptible to the earworm of a line from the chorus of “We Wish You a Merry Christmas” — “Oh, bring us some figgy pudding / And bring it right here.”

Figgy pudding is a thick cake made with plenty of bread, butter, sugar, and fruit that’s often topped with toffee and a flambe of rum or brandy. It’s believed to come from 14th-century Britain, though the historic figgy pudding was a much different affair made with meat, dried fruit, wine, spices, and grains. Its association with Christmas started in the 1600s. Figgy pudding’s pop culture credentials don’t end with holiday jingles: It was also included in Charles Dickens’ 1843 book A Christmas Carol. Dickens described the dessert as “like a speckled cannon-ball, so hard and firm, blazing in half of half-a-quartern of ignited brandy.” 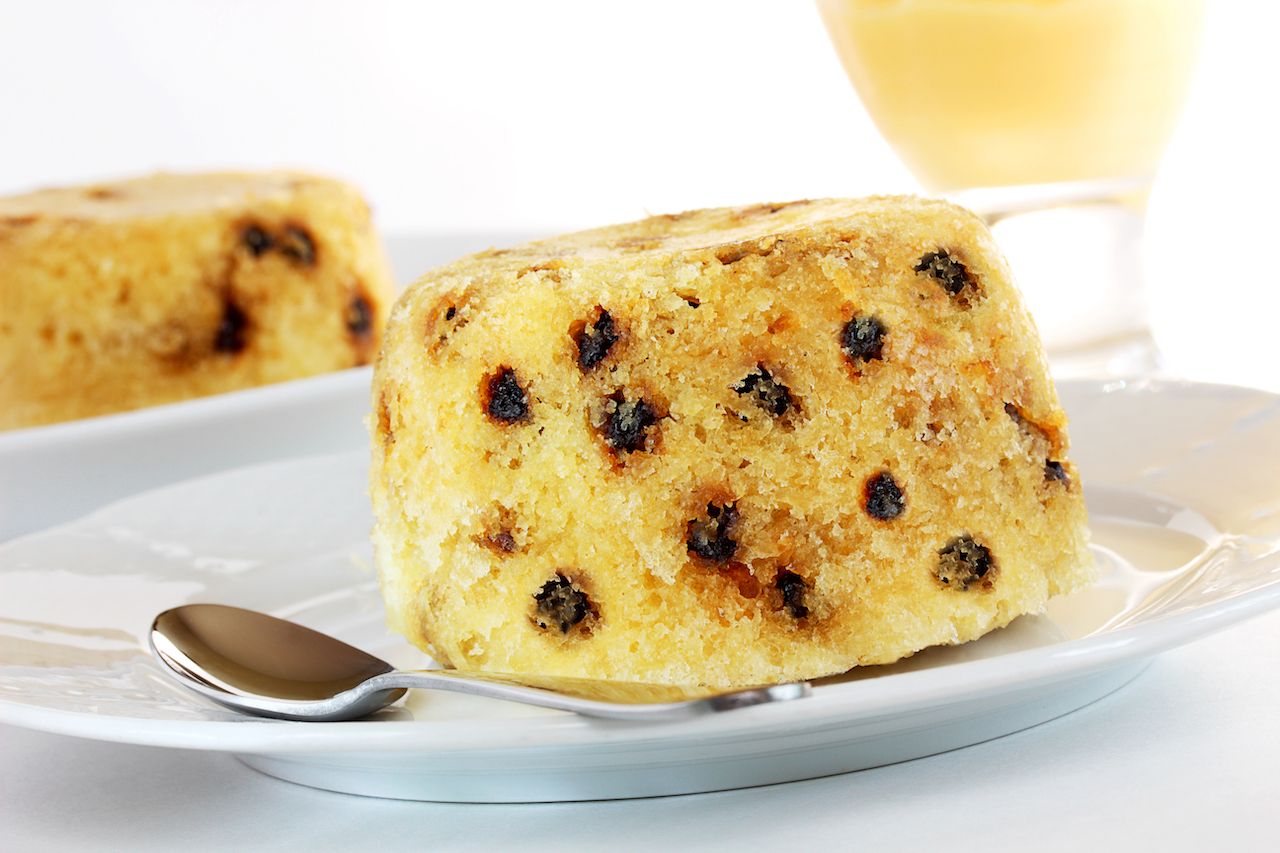 Spotted dick is a bread pudding made with suet (fat from beef or mutton) instead of butter. The “spotted” in the name refers to dried fruit (traditionally currants). The dessert is believed to have been originally created in the mid-1800s. The “dick” in the name is thought to come from dough, according to the BBC, though it’s been a bit of a sticking point in the modern era — some businesses have opted to call it “spotted Richard” because of all the snickering and jokes.

The best London restaurants and places to eat
Tagged
Dessert England
What did you think of this story?
Meh
Good
Awesome

The Truth About Artificial Vanilla Extract (and Why You Should Always Splurge for Pure)
12 Sweet, Savory, and Delicious Chinese Desserts You Have To Try
7 Decadent Global Cheesecake Styles You Need To Try