If you’re a traveler keen on thrills and spine-tingling attractions, a little trip to one of the 50 or so nations in Asia should be top of your bucket list. Whether it’s visiting an entire village swallowed up by nature in China or a totally deserted manufacturing plant on a Japanese island, Asia’s ghost towns are the perfect spooky spots to visit for fans of dark tourism. Here are five ghost town in Asia that are so creepy they’ll have you watch over your shoulder as you explore them. 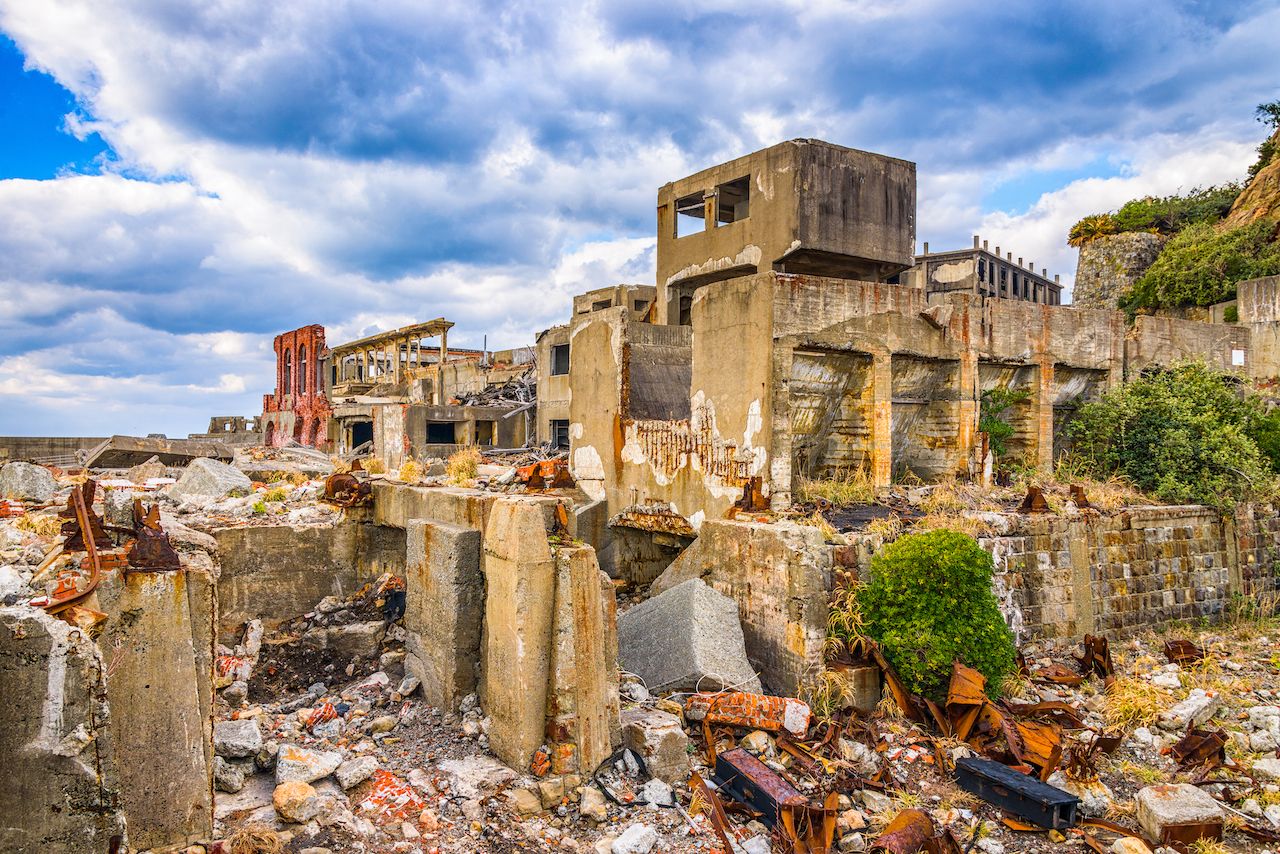 An island getaway is the perfect addition to any trip itinerary, though this island probably isn’t the kind you’d be looking for — no white-sand beaches, resorts, or paddleboard rentals here. Located off the coast of Nagasaki, Hashima Island was acquired by Mitsubishi in 1890 to mine deep-sea coal, and remained in use until the late 20th century. When petroleum replaced coal as fuel in the 1960s, and amid rumors of forced labor, the mine closed in 1974 and the island’s mining population abandoned it.

The island opened to tourism in 2009, and remains a singular example of the effects of weather and corrosive seawater on abandoned buildings. It’s an easy visit from Nagasaki, the target of a nuclear attack in 1945, which is an eerie destination in its own right. 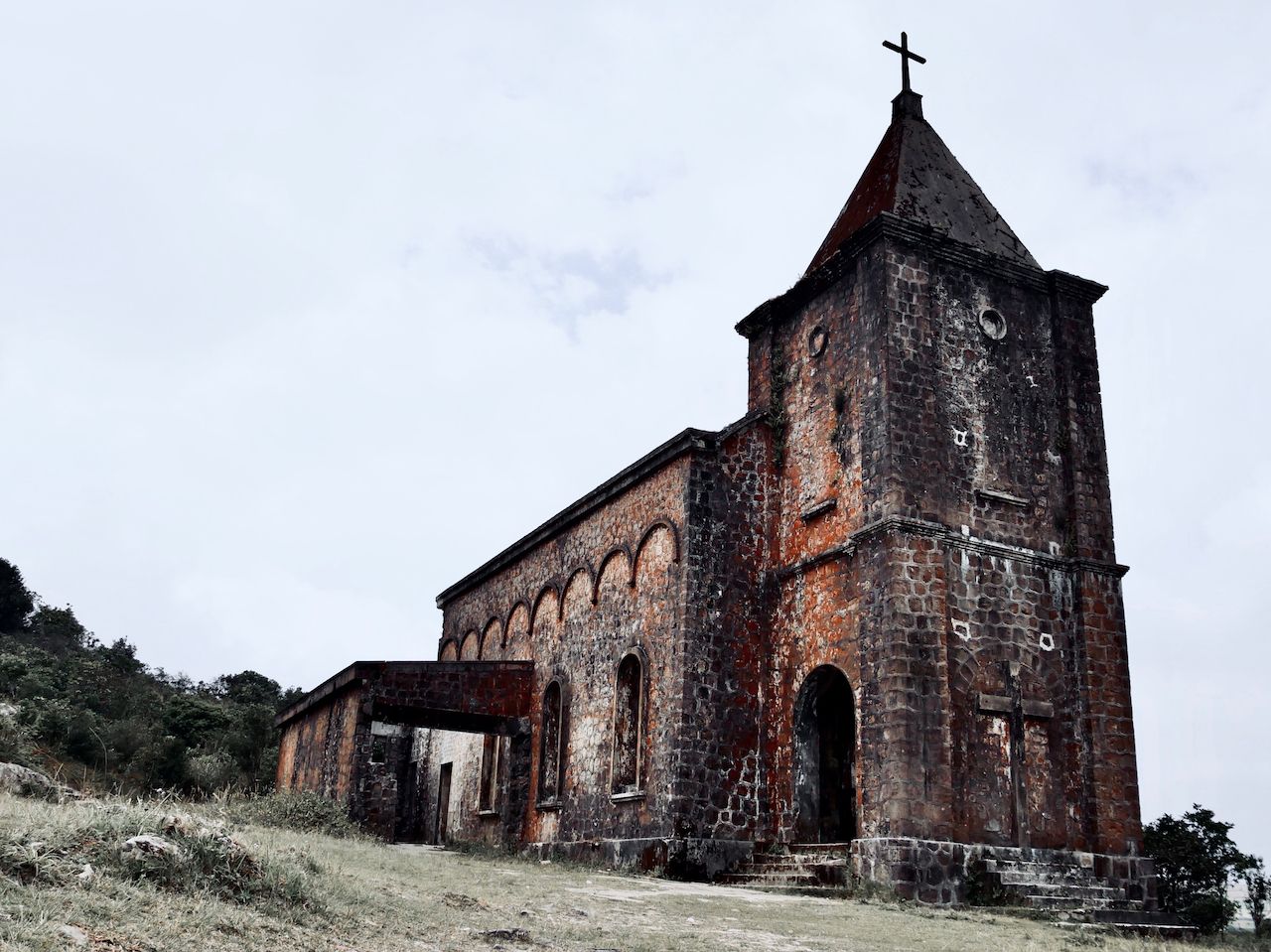 Formerly a popular retreat for the French elite, Bokor Hill Station is now probably the last place vacationers would want to visit. The truly adventurous, however, will revel in the overgrown ruins and appreciate its spooky atmosphere. Located about 23 miles west of Kampot in southern Cambodia, the station was abandoned by the French during the First Indochina War, due to local insurrections. It rebounded in the 1960s after the opening of a casino, but was abandoned again in the 1970s.

You can still see the holes from bullets that struck the French colonial buildings, and the ruins of the original Bokor Palace, which was the centerpiece of the town. Visitors can hike to an elevation of 3,000 feet to see the town’s ruins, which includes an old Catholc church from the 1920s.

As if the place wasn’t already chilling enough, it is also rumored that 900 people died during the construction of Bokor Hill Station, due to the humidity and harsh conditions. 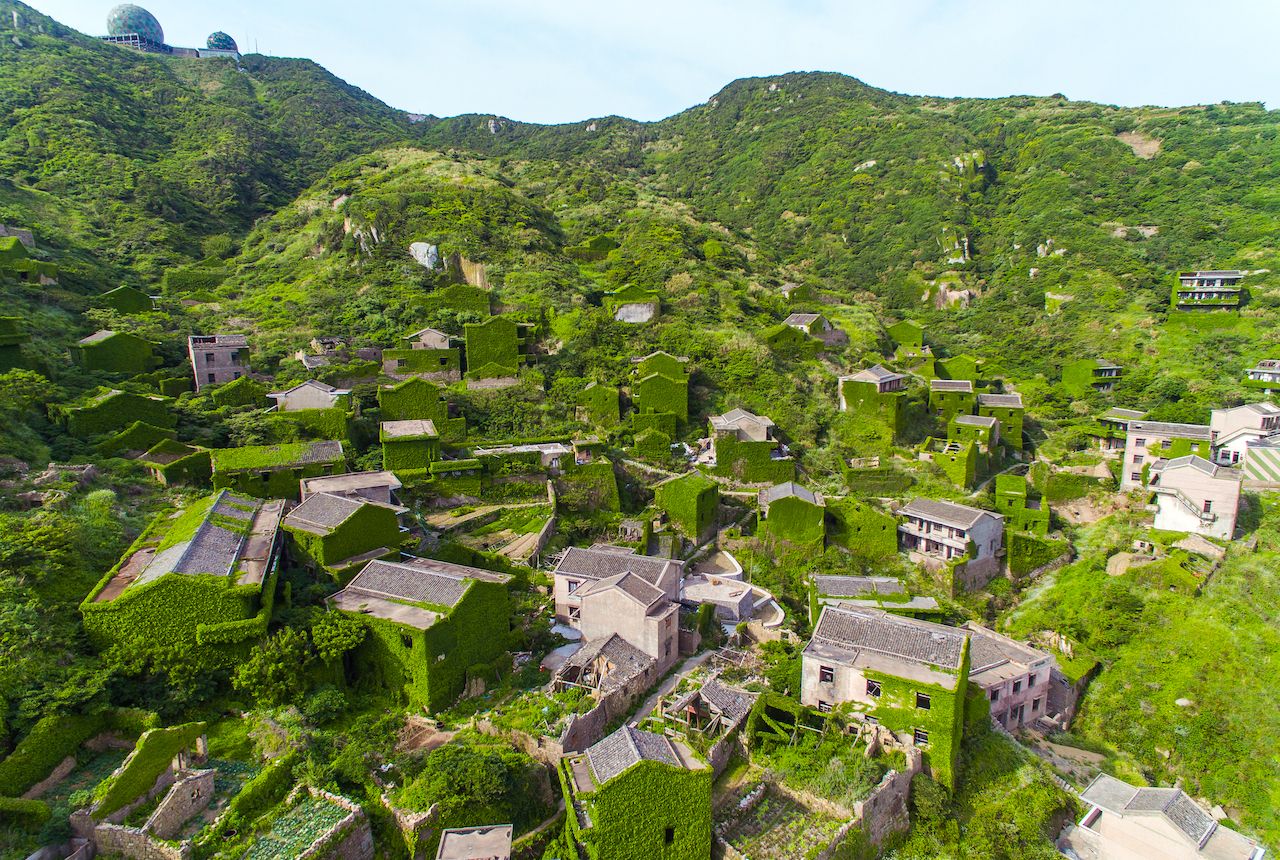 Houtouwan, a village located on Shengshan Island, east of Shanghai, was once a thriving fishing community. Today, due to lack of access to education, food delivery, and the lack of electricity and running water, the island has been abandoned since the early 1990s, though it remains hugely popular with visitors.

The town looks like it is being slowly but surely devoured by nature, with many of the crumbling houses covered in thick layers of ivy. You can hike to the top of one of the island’s many hills for a sweeping view of the abandoned, overgrown community. Some of the old residents have remained, despite the lack of modern amenities. 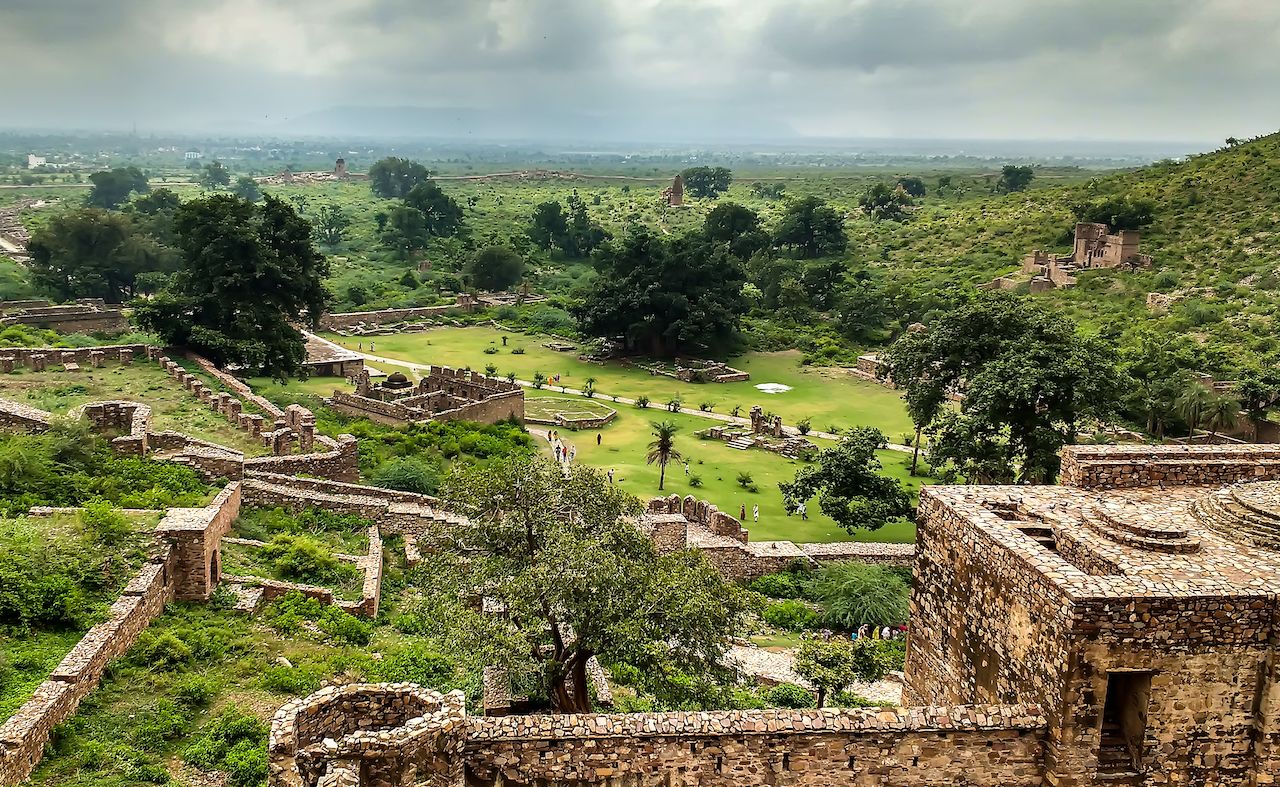 Considered to be one of the most haunted places in India, Bangarh is the site of several reportedly supernatural activities: sightings of strange lights at night, phantom sounds of dance and music, and stories of a curse dating back centuries. It’s said that this 17th century town and its forts were cursed after a tantric was crushed to death by a stone, following his infatuation with a princess and his attempts to cast a love spell on her. Locals believe that the curse condemned the village to desolation and to be forever inhabited by ghosts. Because spirits are thought to enter the place after sunset, the Archaeological Survey of India has gone so far as to forbid entry to visitors after 6:00 PM.

Located about 53 miles from Jaipur, the ruins of Bhangarh are well-preserved and include temples, public chambers, marketplaces, mansions, and the royal palace. Just remember — you must visit during the daytime or you may never return. 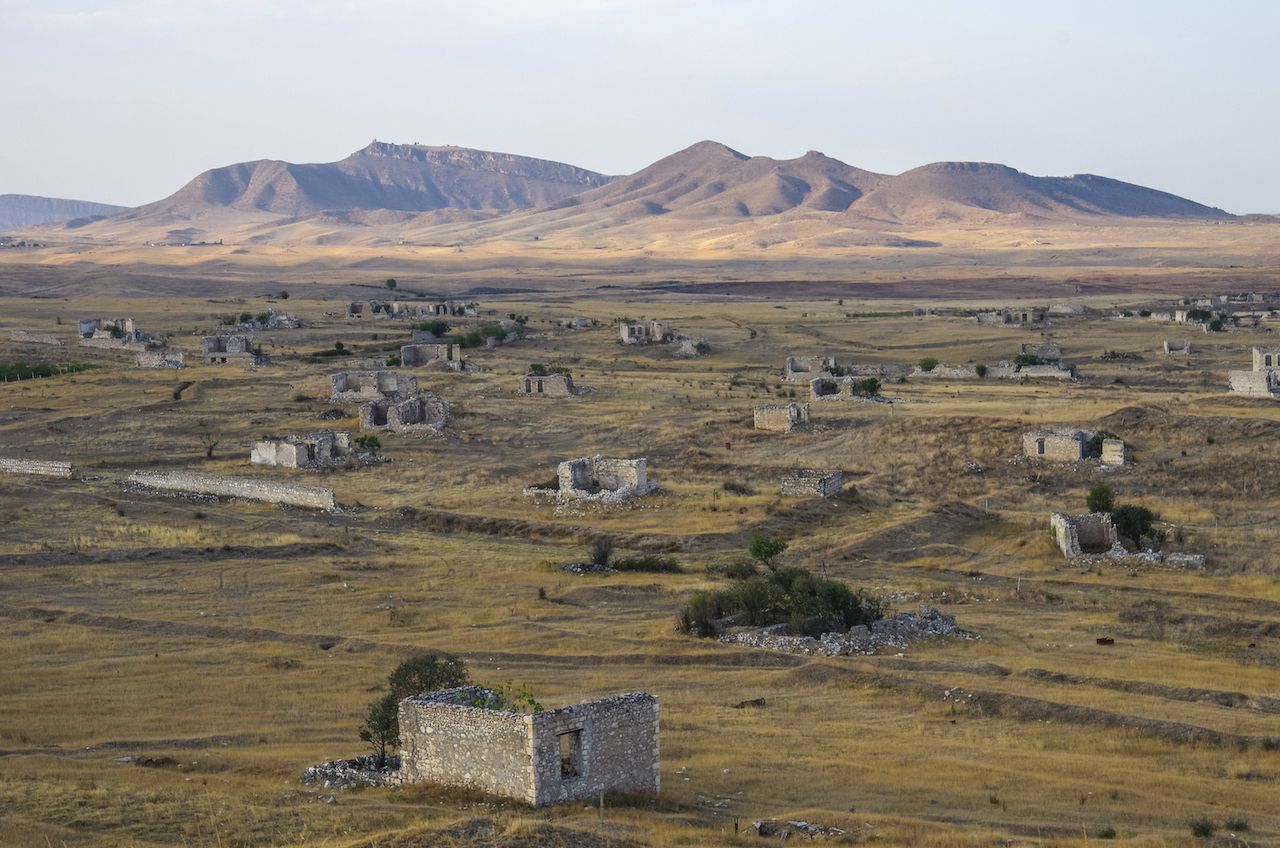 Agdam’s transformation from a metropolis into a ghost town was a dramatic affair. Founded in the early 19th century, Agdam was formerly the capital of the Agdam District and grew to a population of over 23,000 by 1979. In the 1990s, however, the city was mostly destroyed during the Armenian occupation, its buildings looted and many of them — including the mosque — heavily vandalized. Now, the city is completely abandoned and in ruins, and still occupies a precarious position at a cross section between Georgia, Armenia, and Russia.

Given the town’s location, and the far-flung displacement of its residents, it’s unlikely that Agdam will be restored to its former glory for quite some time. Interestingly enough, though the city’s old soccer team has relocated, they kept the Agdam name out of respect for their heritage, even though no one has lived in the city for over 25 years.

Road TripsThese Photos Will Inspire You To Road Trip Through California’s Ghost Towns
Tagged
Art + Architecture Culture Trip Planning Asia
What did you think of this story?
Meh
Good
Awesome