Imagine coming back from a hard day of working with baby sea turtles on a tropical island, stepping aboard a cruise ship where the A/C in your room is already set to cool you off, there’s a big fruity drink waiting for you on the nightstand, and a perfectly heated shower is already running. The sound system is playing a soft steel drum band, and the lights automatically set to complement the sunset. You shower, then head to dinner where your dream meal is waiting without you having to order. Then you go to a show where you pick how the plot proceeds.

This level of service and ultra-customization is but one part of the not-so-distant future of cruising, where data collection and artificial intelligence will make the onboard experience specialized to everyone. MSC Cruises recently released an extensive report called “The Future of the Guest Experience,” which examined current and future technologies to see what cruising might look like in 2030. We read the whole thing, then chatted for a while with MSC, to see just how you might be traversing the ocean a decade from now.

A room that adjusts to your mood 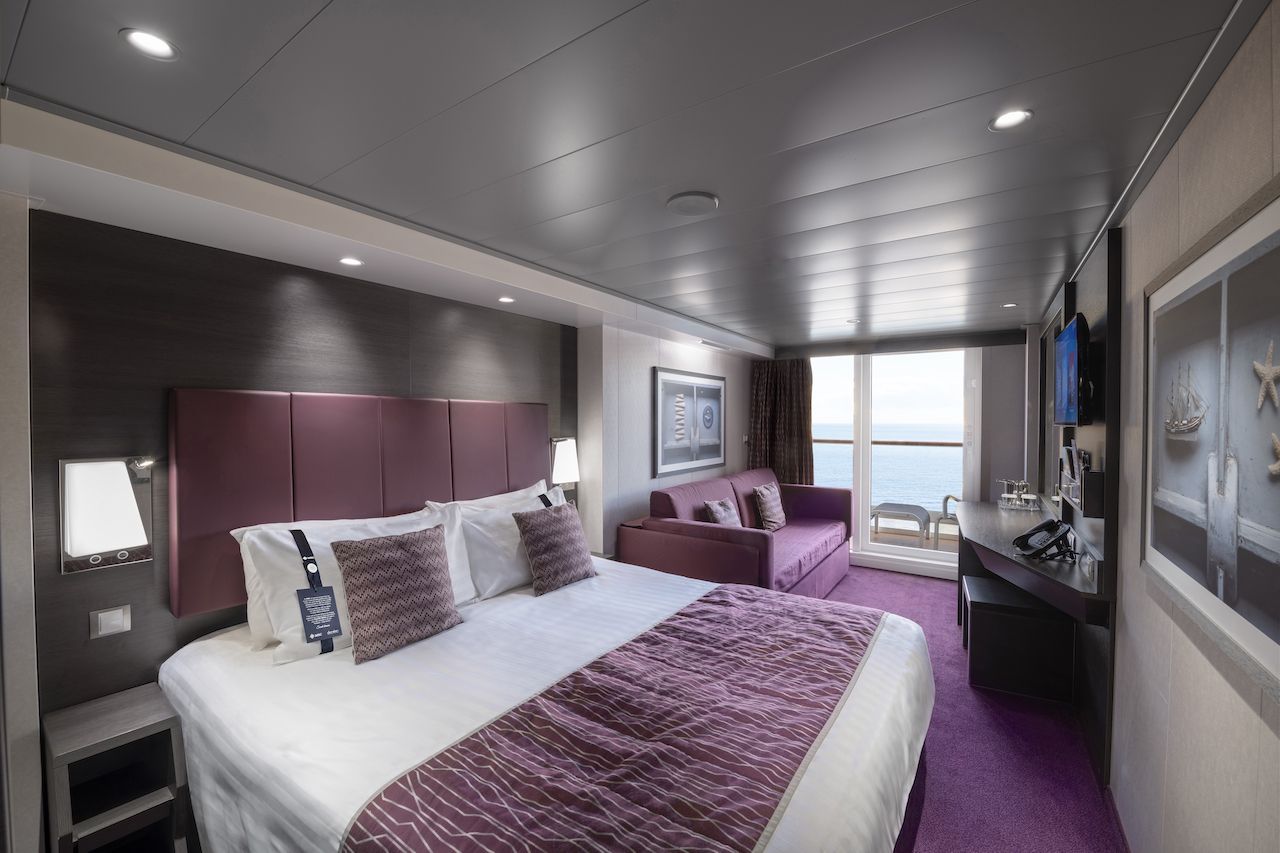 Whether you opted to cruise solo or not, you’ll likely have a roommate in cruise cabins of the future. But this roommate is an AI robot who customizes the cabin to your exact specifications. Using Data ID wallets, which collect data on you to manage your preferences, the room will adjust to the exact temperatures, lighting preferences, and even musical soundtracks you prefer.

But it won’t just be a matter of recording previous settings. BioSay, a technology that measures your pulse and heart rate and analyzes your facial expressions via smartphone, may be used to adjust room atmosphere based on how you’re feeling at any given moment. Just finished a workout? It’ll turn the AC down, the light up, and some relaxing music on for your cooldown.

The walls of the room will change too based on your mood, utilizing Clear Channel’s Emotional Art Gallery, which can change a room’s artwork based on your mood. The same can logically be applied to music, so if you and your partner are planning to head back to the room for some late-night, one-on-one entertainment, the room could detect that and have some Barry White on the stereo before you get back.

Digital assistants already exist on some cruise ships, with MSC’s ZOE expanding over the next decade to lead in-room meditations, plan shore excursions, or simply ask how you’re feeling and appropriately adjust the cabin. It’ll be like having a virtual concierge who’s just a voice command away and doesn’t even require a daily gratuity.

Food automatically tailored to you 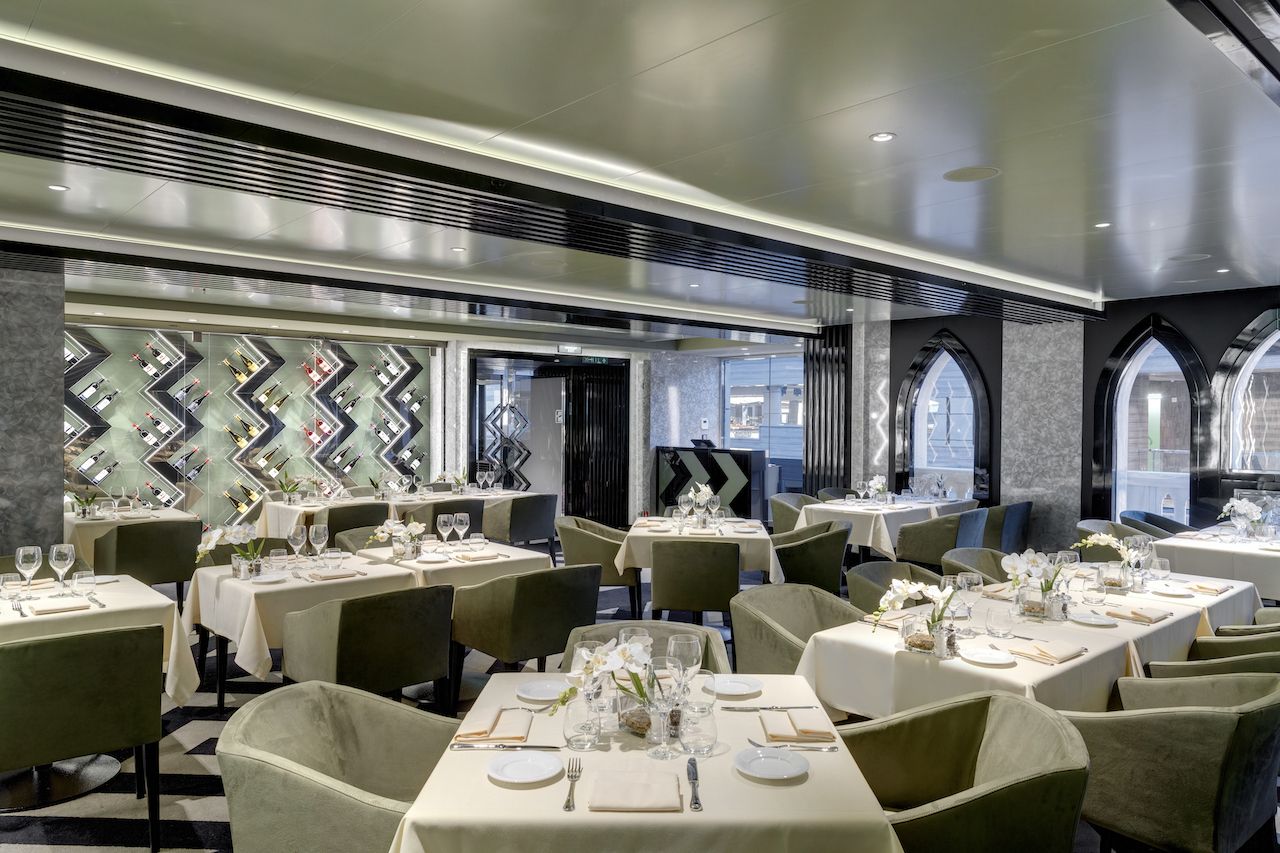 Between newfound food allergies and the rise in vegetarian and plant-based diets, the idea that a standard cruise ship menu could serve all guests is a bit outdated. The aforementioned data ID wallets could contain all of your eating preferences so they’re pre-programmed any time you order. McDonald’s is already implementing this technology at its drive-thrus, and the transition to ships is simple.

For example, if you believe mayonnaise is the devil’s condiment, any time you order food on board, the kitchen will automatically be told to hold anything with mayo. Ditto for any other food you want omitted, or if you’re gluten-free, carb-free, vegetarian, or decided you were allergic to apples the morning before the cruise.
Restaurants won’t have a single menu, either, but rather a customized menu for each guest, based on previous orders and food preferences.

Eating anywhere in the world and across time

Virtual and augmented reality will also become a major part of the onboard dining experience. As dining-as-entertainment grows in popularity, you’ll see LED walls in dining spaces used to transport guests to other places while they eat. Through the magic of virtual reality, you can eat fondue on a Swiss mountaintop or enjoy roasted pork on a beach in Hawaii while on a cruise ship in the Caribbean. You could even recreate Game of Thrones-style medieval feasts with the right partnerships, just minus the carnage.

If you want a glimpse of what this might look like, head to the Otherworld” target=”_blank” rel=”nofollow”>Otherworld bar in London, where 14 themed rooms take you all around the globe and throughout time while you eat. It’s a glimpse into the future of dining, likely both onboard and off.

People will be part of the entertainment 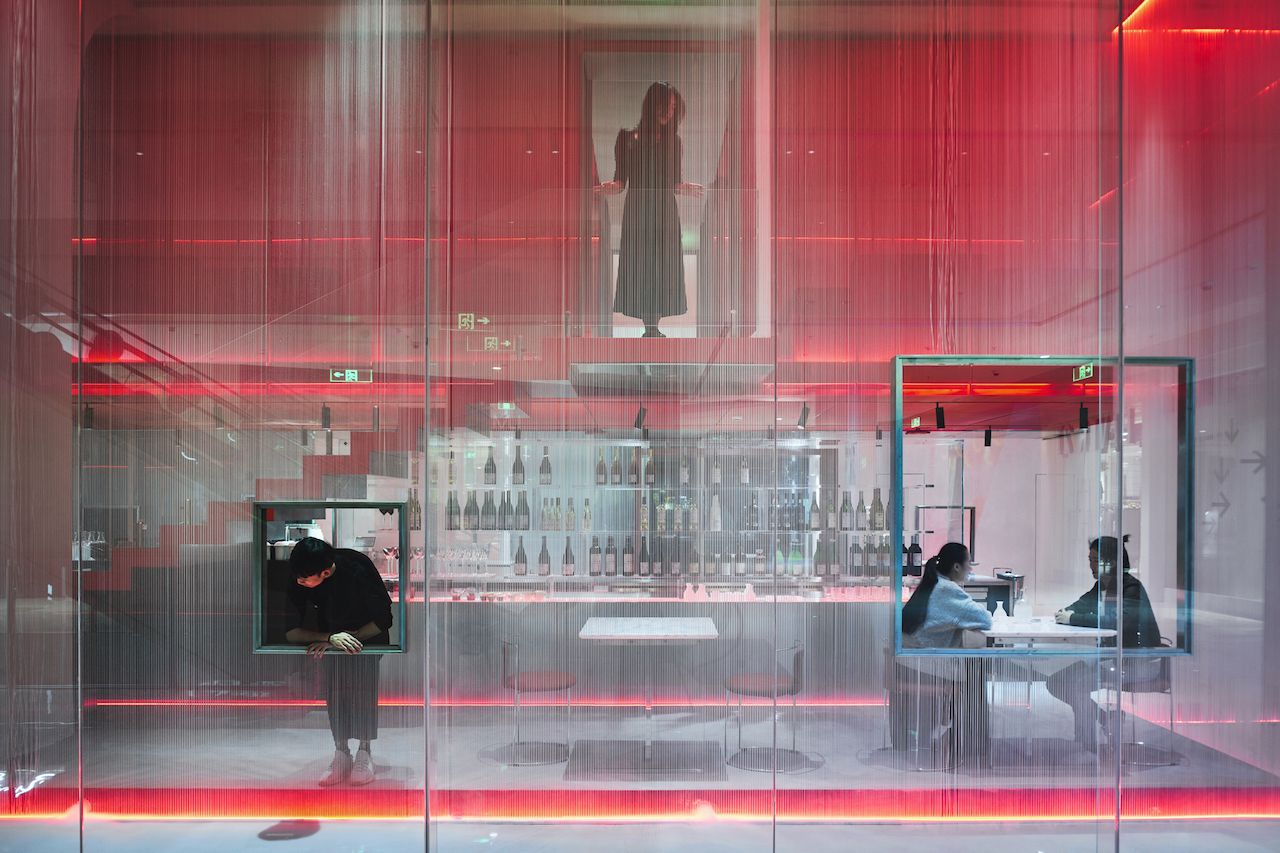 The era of the washed-up lounge singer passing as cruise ship entertainment is long gone, as now you’ll find everything from Broadway to ice shows to Cirque du Soleil on board cruise ships. But MSC predicts that by 2030 guests will be part of the action too, participating in what they call Anthropo-tainment, effectively making passengers the stars of the show.

MSC is already incorporating this in its Cirque show Excentricks, where audience members are regularly brought onstage, and the show changes course based on audience reaction. Taking this the next logical step, shows of the future will allow audience members to vote via smart devices on what happens next, like a big, collective, Choose Your Own Adventure where the show is never the same twice.

This might also include more game shows too, like instant American Idols where contestants are voted off. Or quiz shows where the collective selects the right answer.

Augmented and virtual reality will also be huge parts of future entertainment. MSC is already using AR to power its Spy Mission, for example, where young guests are given clues and led through the ship in a spy experience. This can logically be carried out to ship tours, AR-assisted shows, and other features that place people inside the production. 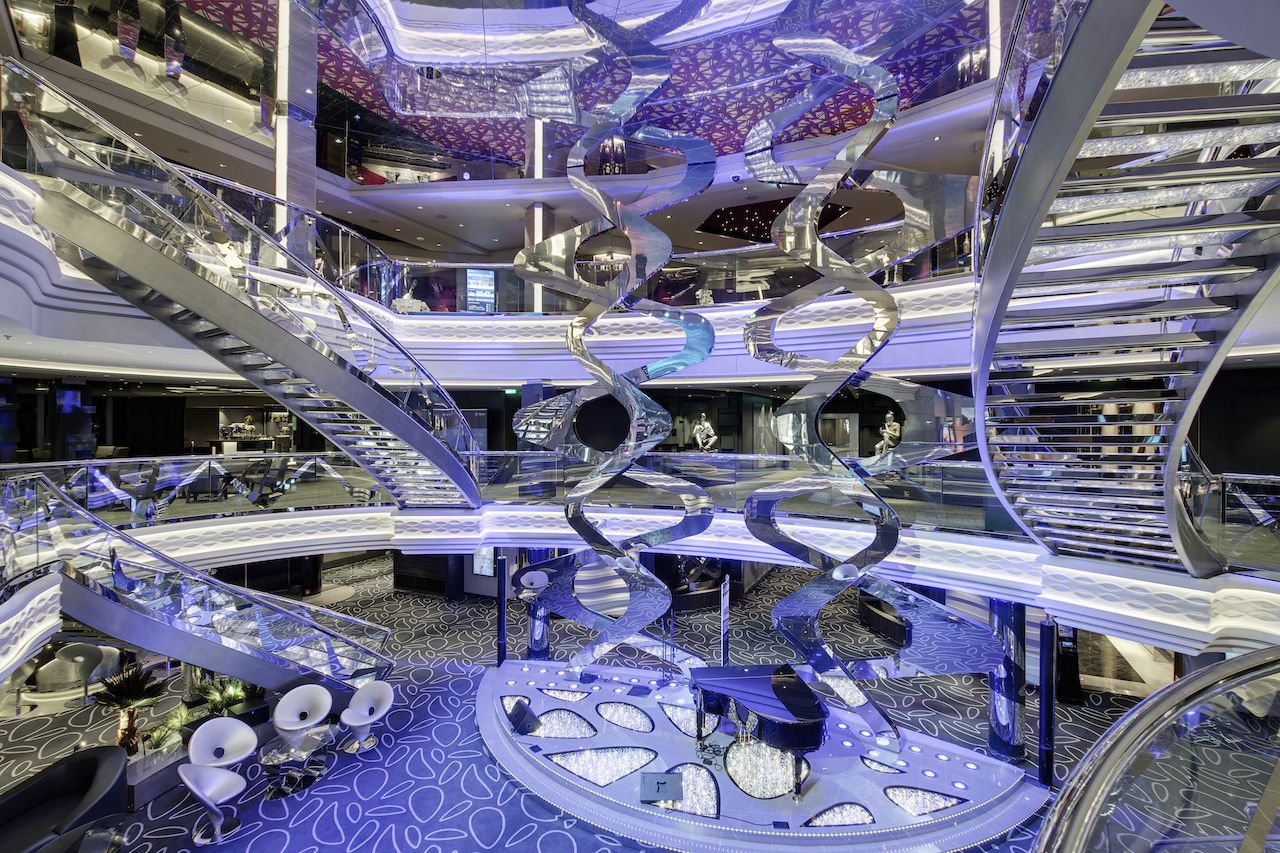 Perhaps the thought of conversing mostly with in-room virtual assistants and walking around with an AR headset on sounds a little… isolating. But cruise ships will aim to balance out the isolating potential of technology with its potential for connection, using stuff like virtual lobbies where guests can interact with other people onboard via chat rooms, sharing as much or as little about themselves as they like.

Common areas will serve multiple purposes, as well, a trend we’re already seeing onboard ships like Royal Caribbean’s Symphony of the Seas, where a laser tag arena by day turns into an ice skating theater at night. MSC also discussed ships’ abilities to use partitions and flexible lighting, turning a sports arena into a club on one of its ships. It will also use data ID wallets to create lighting and climate based on guests in the area, though there were no real details on how that consensus would be reached. 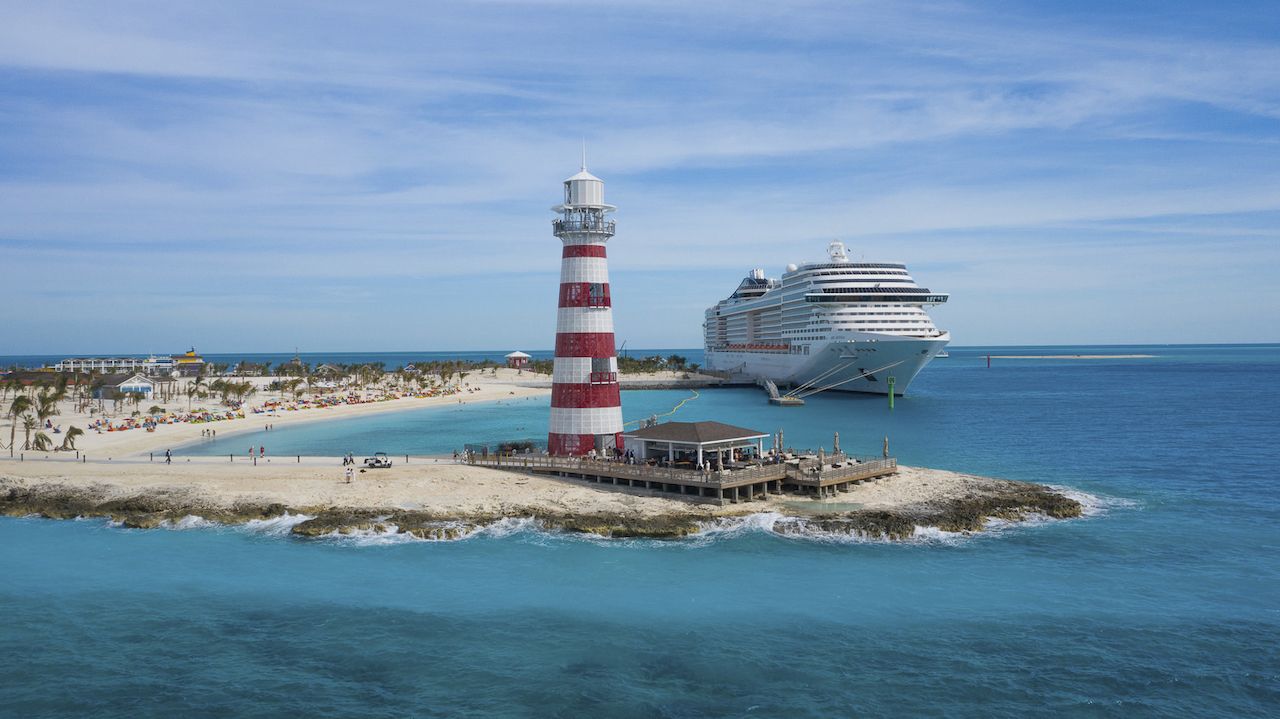 As purpose-based traveling becomes a larger focus, so will cruise lines move away from traditional snorkel trips and waterfall tours and more towards service-based shore excursions. So you will see more options like rescuing baby sea turtles in the Caribbean, for example, or working with bees in Copenhagen. Beach clean-ups might also be part of your cruise experience, or maybe visiting local villages in Asia and Latin America.

Perhaps the most pioneering change we’ve seen from MSC is in the development of private islands. For decades, these islands were basically land-based extensions of the ship, sandy spits filled with beach bars and souvenir shops run by the cruise line where you’d spend a full day of your vacation. Seeing that guests want more social responsibility from travel brands, MSC recently opened the Ocean Cay Marine Reserve, a onetime wasteland of barges and dredges transformed into a 64-square-mile marine reserve.

In addition to protecting the waters around it, Ocean Cay will also be home to a marine research lab and is already working to rehabilitate and replant coral reefs around the island. Basically, rather than taking an existing natural island and turning it into artificial development, the trend will be to take decimated spaces and use them to create nature.

This won’t just extend to natural spaces, either, but also to abandoned or derelict resorts and buildings. The practice is already visible in places like the Zallinger resort in Italy, where an abandoned church and decrepit barn have been transformed into a luxe vacation destination. And in Switzerland where the entire village of Corippo — population 12 — is being turned into a luxury resort with the town square as the lobby. 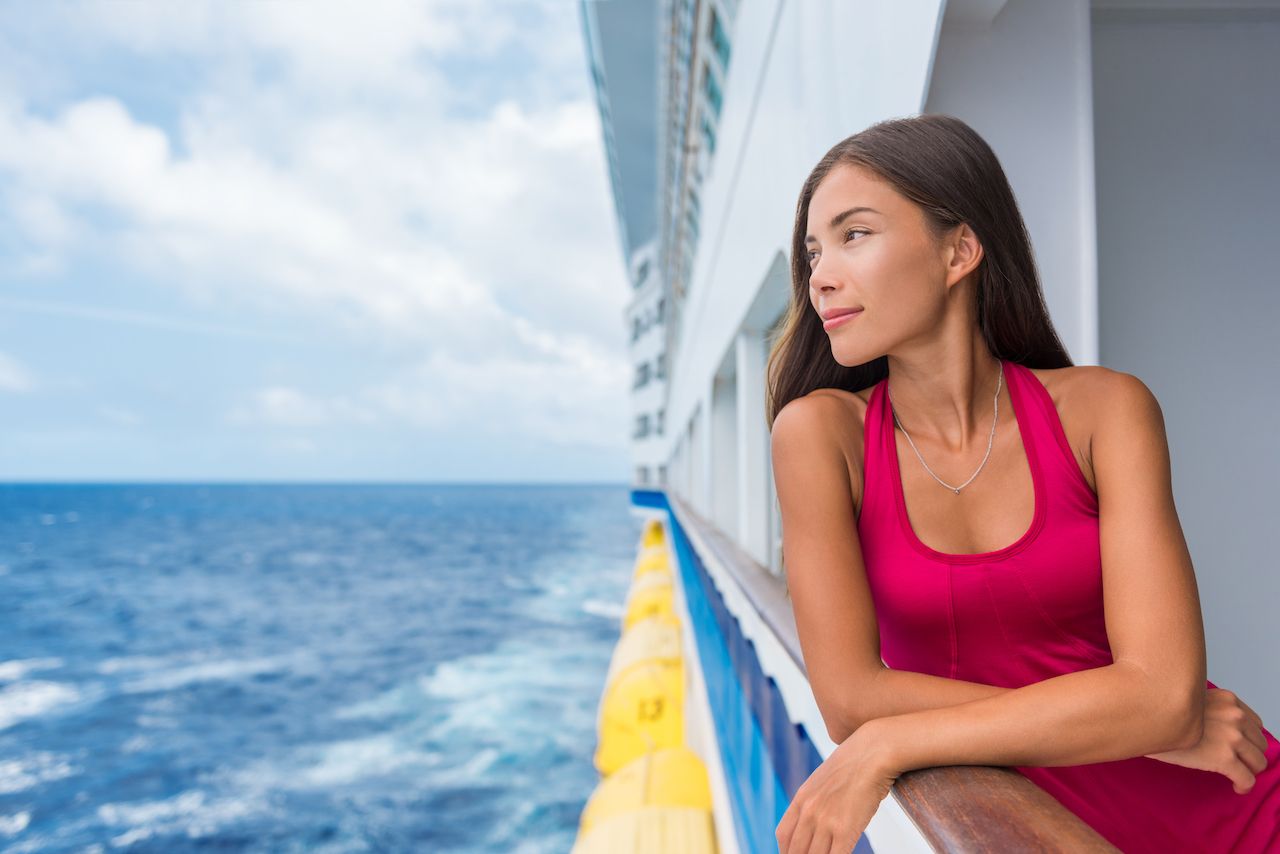 Customizable technology sounds cool until you realize there’s a robot — and potentially a person — who’ll know how you’re feeling before you do. Like with any data-driven advancements, privacy concerns are a big deal on board, and for MSC’s part, the cruise line says guests will be able to opt out of any or all of it. But, of course, you won’t have your mood-specific playlist rolling as soon as you get home.

MSC also says it won’t sell any of your data, a trend we’d hope other cruise lines follow. And as governments begin to regulate data collection and ownership, the cruise lines will obviously adjust. So, like anything in the future, none of this is guaranteed. Still, it’s fun to think of a travel experience where you can roam the planet’s seas with your living space, food, and entertainment catering to your every need. Even if you don’t know you need it.

CruisesYou Can Go on Weekend Cruises, and They’re Awesome
Tagged
Cruises Technology + Gear
What did you think of this story?
Meh
Good
Awesome