Rosta Capek grew up on bluegrass. His mother played banjo in an all-female bluegrass band that his father, a folk musician, founded in the early 1970s. The band, Schovanky, was a sweeping success: Its songs became radio hits. Its hits went on to soundtrack movies and TV shows. Schovanky was even invited to tour with Johnny Cash in the early 1980s.

Like many Americans, particularly those from the Southeast, bluegrass is in Capek’s blood. Yet Capek is not from the United States at all. He, like his parents, was born and raised in the Czech Republic.

Bluegrass itself was born in rural Appalachia after World War II. Its heritage is rooted in Irish, Scottish, and English musical traditions that were brought over by settlers and later mingled with blues, country, and string-heavy mountain music.

The genre’s name is credited to the band Bill Monroe and the Blue Grass Boys. Artists like Earl Scruggs, a North Carolina native, and Tennessee-born Lester Flatts helped solidify the sound, both as members of Monroe’s band and as the leaders of their own group, the Foggy Mountain Boys, which helped bluegrass find a wider American audience.

Festivals like San Francisco’s Hardly Strictly and Colorado’s Telluride Bluegrass Festival are testaments to the genre’s reach in the US, but bluegrass didn’t stop at domestic stages. Not long after the Blue Grass Boys began performing in the US, bluegrass made its way to Europe through the Armed Forces Radio, where it was not only received by American soldiers stationed overseas but also intercepted by Czech ears. 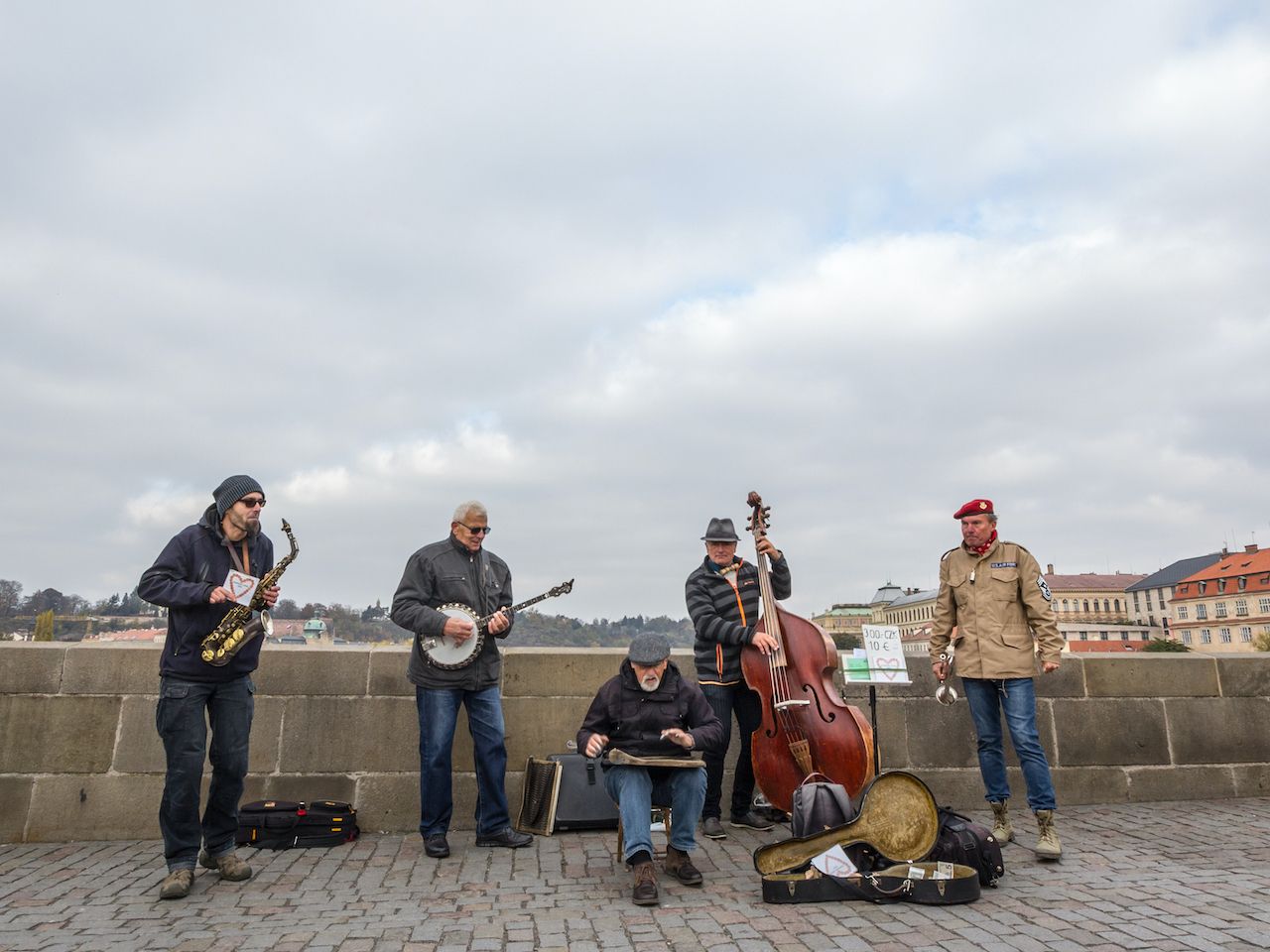 Ethnomusicologist and fiddler Lee Bigood argues that much of the genre’s appeal can be explained by the sense of freedom that bluegrass embodies, which Czechs craved having spent the 19th and early 20th centuries pining for independence from the Austro-Hungarian Empire.

“America was a big part of what the possibilities were,” he told Radio Prague International in 2008. “America stood for democracy and the Wild West, the Wild West being a source of a lot of imagery and fantasy that was really effective.”

This desire for freedom and the romanticization of the American West aligned in an early 20th-century practice called tramping, Bigood writes in Czech Bluegrass: Notes from the Heart of Europe. Free-spirited Czechs would venture into nature to enjoy outdoor pursuits like camping and fishing. Many also played folk songs, both Czech and American. Soon, tramping became a subculture with its own style, slang, and sound.

Bluegrass started to reach a wider Czech audience in the 1960s when then-Czechoslovakia was a satellite state of the Soviet Union. Pete Seeger staged concerts in 1964, introducing the country to the five-string banjo. The first bluegrass festival in Europe, Banjo Jamboree, was held in Čáslav an hour east of Prague in 1972. Johnny Cash made an appearance in 1978.

Yet it was not American bluegrass that was popularized throughout the 20th century but a uniquely Czech iteration of the genre.

“For example, Jessie James is nearly a Czech national song,” says Capek of one of the most frequently covered songs in the American folk canon, “but with the Czech words, of course.”

Capek was born in 1968, the year Soviet forces quashed Czechoslovakia’s Prague Spring liberalization movement, which intensified the forced rejection of American influences. Czech bluegrass bands, many of whose names nodded to the American bands that inspired them, were forced to adopt Czech names, driving a greater wedge between the genres.

During this era, says Capek, “bluegrass music was a kind of protest.” The songs that slipped past the Iron Curtain brought not only visions of freedom and democracy but also rebellion.

In the end, rebellion drove the communist party out of Czechoslovakia during the 1989 Velvet Revolution, almost a decade after the party prevented Capek’s parents from touring with Johnny Cash. Western music flooded in, and Czechs began traveling, reigniting interest in American bluegrass in tandem with the hybrid genre that was already ingrained in Czech culture.

Though distinct, today’s Czech bluegrass doesn’t follow a single format. Some bands perform in Czech, a tribute to the early lyrical evolution, and others play in English, singing in their best American accents. Often an homage, Czech bluegrass is never an imitation.

Jeff Scroggins, a two-time national banjo champion and former frontman of the internationally acclaimed bluegrass band Jeff Scroggins and Colorado, ranks Czech bluegrass musicians as some of the most technically proficient in the world. Built on lightning-fast fingerpicking, bluegrass instrumentals require incredible dexterity to master.

No international audience can compare with the reception an American bluegrass player gets in the US like the fans in Prague, according to Scroggins. “They get real rowdy there,” he says, remembering a particular performance in a packed 2,000-person theater that literally vibrated with excitement. “Just the way I like it. Everyone on their feet like they are back home.” 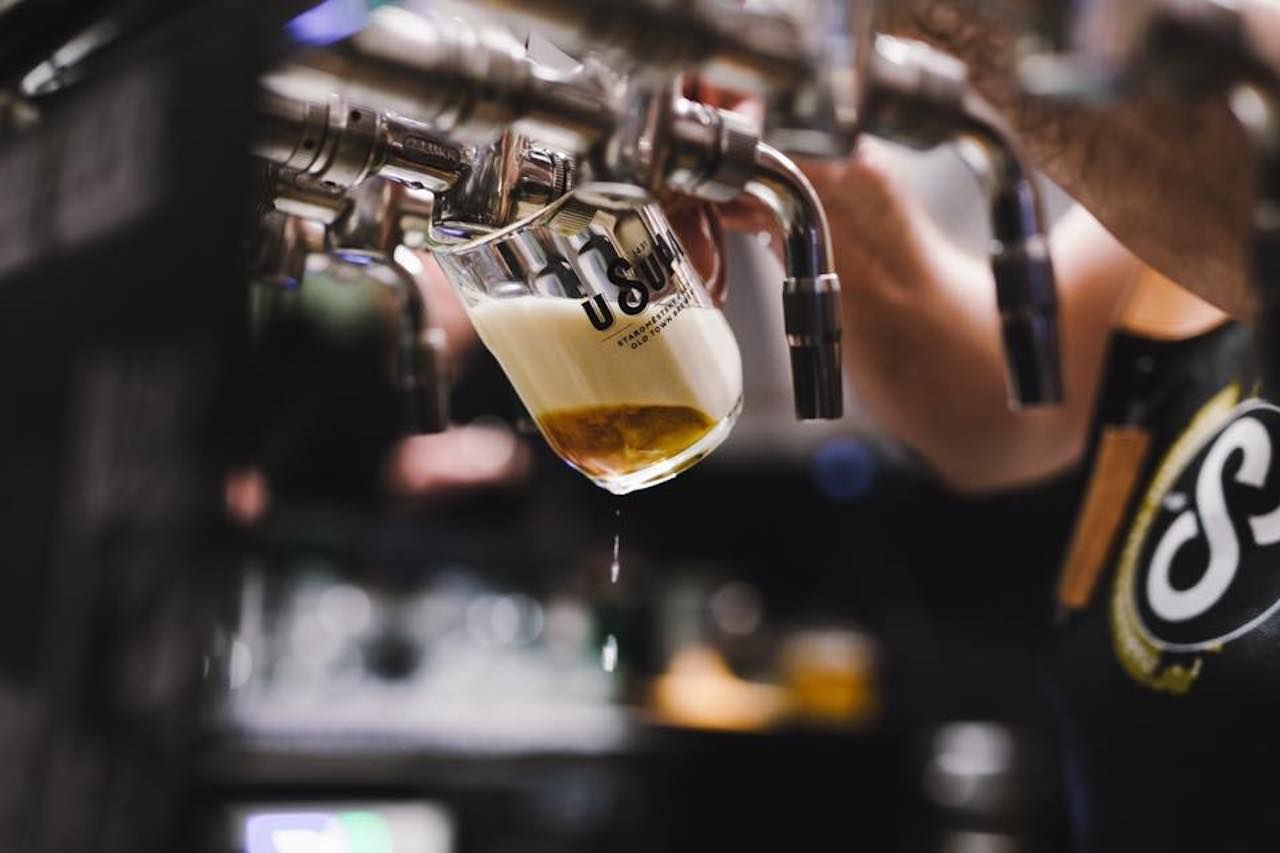 For American bluegrass fans, transatlantic travel to check out the Czech scene is an experience unto itself. The legendary bluegrass jam nights at U Supa pub, which bills itself as the city’s oldest brewery and a Western-style country saloon, offers a fun, if idiosyncratic, perspective on the heart of Prague’s Old Town. Banjo Jamboree, Europe’s inaugural bluegrass festival, is still held annually in Čáslav, with dozens of other events and festivals hosted throughout the year.

Now ubiquitous in the Czech Republic, across Europe, and abroad, Czech bluegrass has evolved from a byproduct of American bluegrass to a peer. Countless bluegrass giants from the US have played venues in Prague. In 2011, one of the biggest names in Czech bluegrass, Drúha Tráva, performed for President Obama at Prague Castle. And some of the most highly regarded bluegrass instruments in circulation are crafted by Czech hands.

Two of them belong to Rosta Capek. Though he never aspired to be a musician like his parents, Capek always envisioned a career that involved bluegrass. He was trained as a violin maker as no schools in the Czech Republic offered classes in banjo-making in his youth. He later applied that craftsmanship to bluegrass instruments.

Today, Capek’s instruments are coveted by bluegrass musicians of all nationalities, notably the American greats: Ricky Skaggs, a 2018 inductee into the Country Music Hall of Fame, plays Capek’s mandolin and mandocello. Grammy nominee Andy Statman owns an F5 mandolin. Eight-time International Bluegrass Award winner Becky Buller plays one of his ukulele banjos, and Capek is even making a signature model of a five-string banjo for 2018 Banjo Player of the Year Ned Luberecki. Demand is also high in Norway, Sweden, Germany, England, and Italy.

One might argue that Capek is continuing a tradition that traces back to the very beginning of bluegrass. Bigood notes that Czechs, through their historical ties to Slovaks, can lay some claim to the foundations of American bluegrass in the form of the characteristic steel-string dobro, or resonator guitar, which was invented by the Slovakia-born Dopyera Brothers in the United States in the 1920s. Though a loose connection, perhaps, Czech luthiers like Capek can now claim their influence on the worldwide bluegrass scene without hesitation.

“It’s a sign of how far [bluegrass] has evolved there,” says Scroggins. “It adds to the authenticity. By the time you’re down to how to make a banjo, you have to understand the music.”

At the end of the day, though, neither Scroggins nor Capek attributes the demand for Capek’s instruments or bluegrass itself to any nationality, location, or even language.

“For the people for whom bluegrass is compelling, it is intensely compelling,” says Scroggins, who grew up in Oklahoma wanting to be Jimi Hendrix or Jimmy Page but could never sidestep his attraction to the banjo sound. “Bluegrass is undeniably a music that speaks to certain people,” he says, “and it’s not much about the lyrics to be honest.”

It’s hard to say what, exactly, makes bluegrass so compelling for such a wide audience. Perhaps it’s the combination of steel strings, fast fingerwork, and vocal harmonies. Perhaps it’s a spirit of abandon that’s somehow imbued in the melodies.

Whatever the reason, bluegrass saw the Czech Republic through political turmoil and a social growth spurt. It spoke to Czechs, as Scroggins says. And, when translated, tweaked, and reintroduced to American audiences, Czech bluegrass spoke right back.

May 3, 2022 Suzanne Bhagan
✖
travelstoke
Download the mobile app
stoked by