Lara Lee, author of the new Indonesian cookbook Coconut and Sambal, remembers the noise — a “cacophony” she calls it. The rickety ceiling fan spinning overhead, the squeak of the laminate tables and the mismatched condiment bottles and bowls, and the overlapping early morning conversations in between slurps of noodle soup. This is breakfast in Indonesia — a joyful, colorful, loud welcome to the day.

“What I love about Indonesia is the passion for food, it is full throttle,” Lee tells me. “I began to realize that Indonesians are always eating. So I would go to someone’s house, to learn to cook or to interview them, and there would be a platter of, you know, Indonesian sweets on the table or banana fritters. I really fell in love with that way of being — you know, always eating.”

Lee grew up in a mixed-race, working-class family in Sydney, Australia; her mother is Australian, and her father is Chinese-Indonesian. Traveling to Indonesia wasn’t an option, but her home growing up was filled with touches of Indonesian culture. Her father played Indonesian folk music, and her mother dressed her and her sister in batik for special occasions — but it was the food that really solidified her connection to a country she had never set foot in.

“I think there are probably a lot of second-generation immigrants, the children of immigrants, who live far away from their ancestral heritage, but they feel that just because you haven’t set foot in a place doesn’t mean you don’t feel like you belong there because they’ve been introduced to that culture through certain mediums,” Lee says. “And for me, that medium was food.” 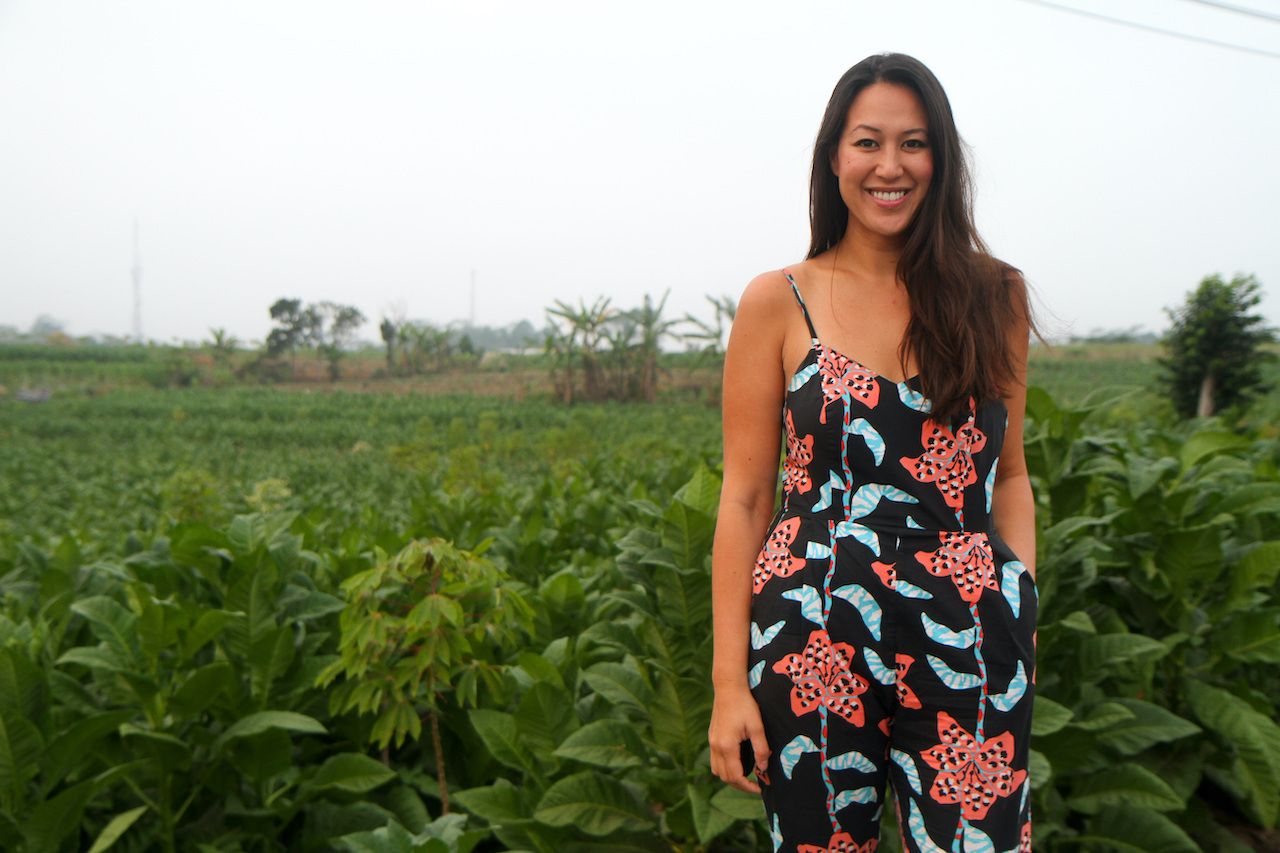 When she was five, her paternal grandmother, whom she called Popo, left Timor and moved in with her son’s family. Lee, fascinated, watched her whittle carrots, cucumbers, and tomatoes into the shape of flowers and grind ingredients together for the peanut sauce dressing for the gado-gado salad. Popo passed away before Lee was able to learn to cook from her, a loss that she says she’s still grieving.

In 2016, Lee quit her corporate job and became a professional chef. Around the same time, she made another big decision: to return to her ancestral homeland, where she would research the cookbook that became Coconut and Sambal, in order to “reconnect with my heritage through my grandmother’s recipes.”

Lee embarked on a journey from Bali, to Sumatra, to Timor — where her family is from. She recovered her grandmother’s old recipe books from her home in Timor and emailed her aunties, who shared their own recipes and gifted her old photo albums. During her travels, Indonesian people — often strangers, like her cab driver or a vendor at a food market — invited her into their homes to teach her their traditional cooking techniques and pass down generational recipes. 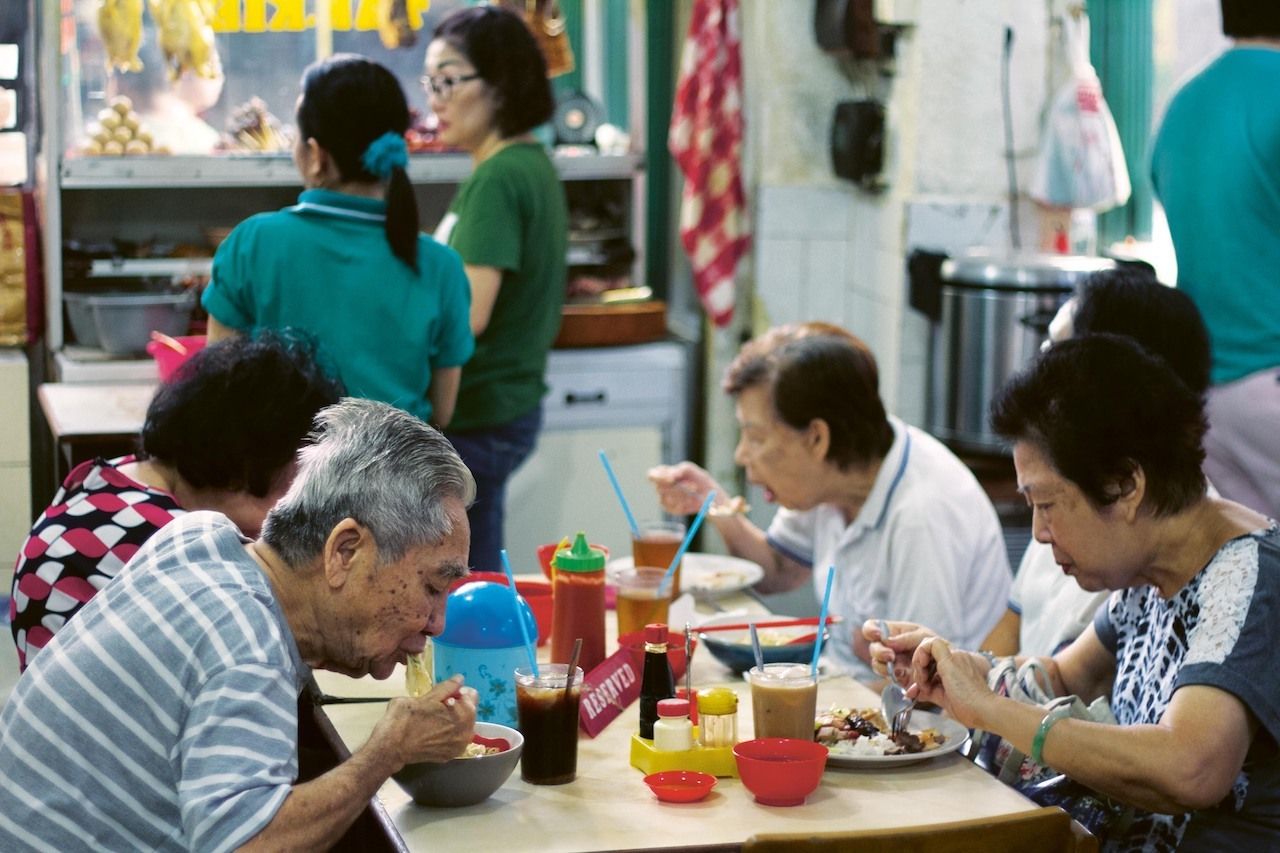 “When I traveled around. I was met with such warm hospitality,” she says. “That act of giving, of giving time, of giving their family recipes, I encountered that everywhere I went. When they found out I was writing a cookbook, there was such pride. So many Indonesians that I met said, ‘This really is such an honor for us to teach you our recipes.’”

The cookbook borne out of that journey is a loving, nostalgic, and celebratory homage to the zesty, tangy, and pungent cuisine of the Indonesian archipelago. Lee’s personal connection to the food allows her to offer more than just a recitation of cooking techniques and ingredients. She reveals Indonesia’s culture of hospitality, its reliance on bustling outdoor markets for beloved fresh vegetables, and its near-universal obsession with snacking and breakfast, as well many other cultural landmarks that make a complex, layered country that is still mostly mysterious to many Westerners.

“I feel that Indonesian food hasn’t had its time in the mainstream yet,” Lee says. “What I wanted to do was to ensure that people didn’t feel afraid to cook Indonesian food. I do want it to become something that becomes more popular.”

As an introduction to Indonesia’s cuisine, here are eight classic dishes to know. Five are Indonesia’s national dishes — soto ayam, rendang, satay, nasi goreng, and gado-gado — while the others will welcome you to the fragrant spices and addictive heat of Indonesian cooking. 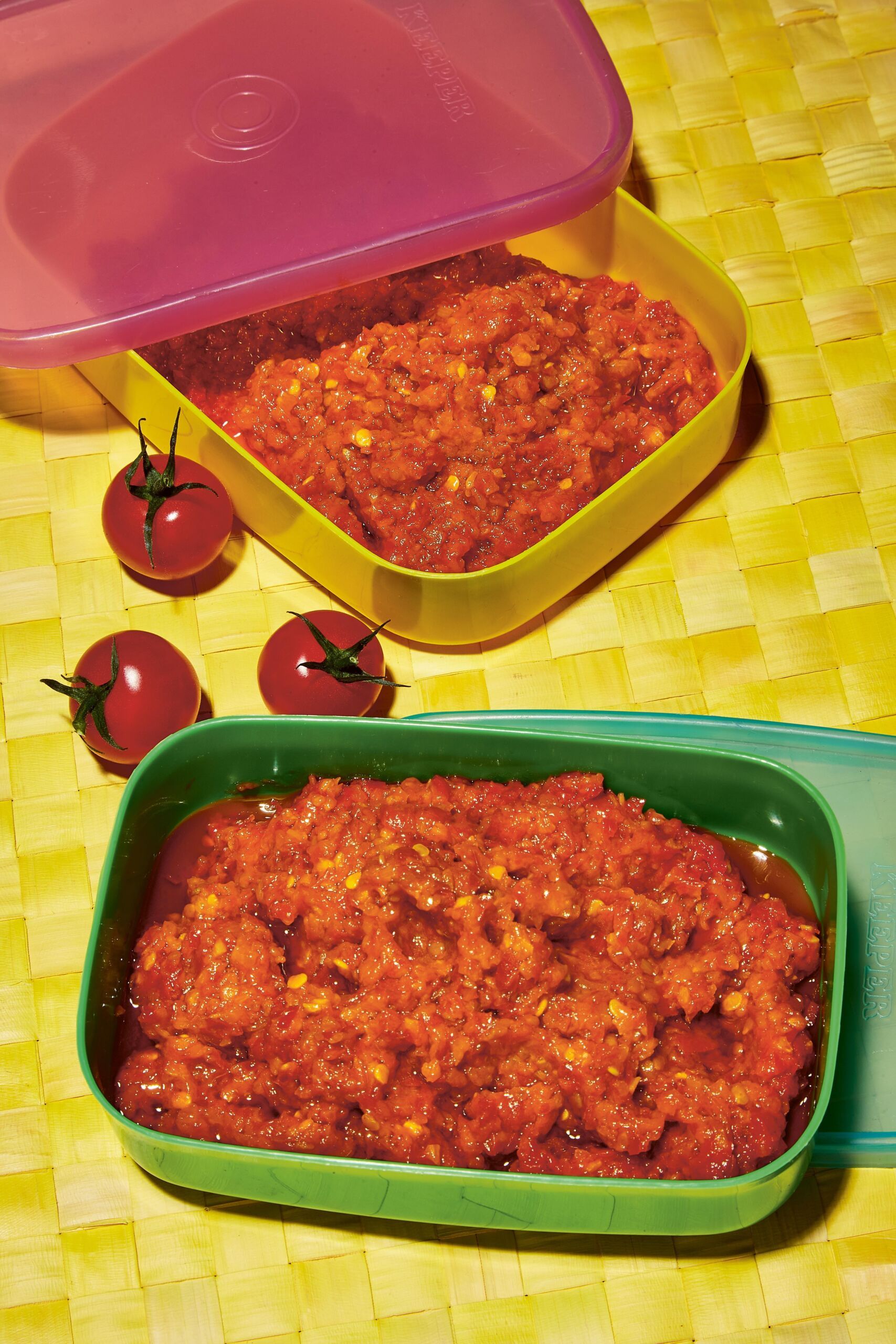 Sambal is a sauce that’s at the centerpiece of the Indonesian dinner table. It accompanies every meal. Lee writes that “growing up in Timor, my father could not remember a meal that didn’t feature sambal.” To truly embrace Indonesian food, you need to learn to love sambal. At its core “are the fiery flames of chili peppers, seasoned with a mix of ingredients that includes tomatoes, shallots, garlic, ginger, tamarind, and terasi (fermented shrimp paste),” Lee writes. Indonesians like heat with their food (she praises the chili paste’s “addictive burn”) and rarely de-seed chilis, but that’s not always the case — there are milder versions of sambal, like Balinese sambal matah, which is infused with lemongrass and ginger, and also the tomato-based sambal called tomat.

“Sambal exists to complement rather than overpower the flavors in the dishes it is served with,” Lee continues, “so is eaten only a little at a time, often with every bite of food.” 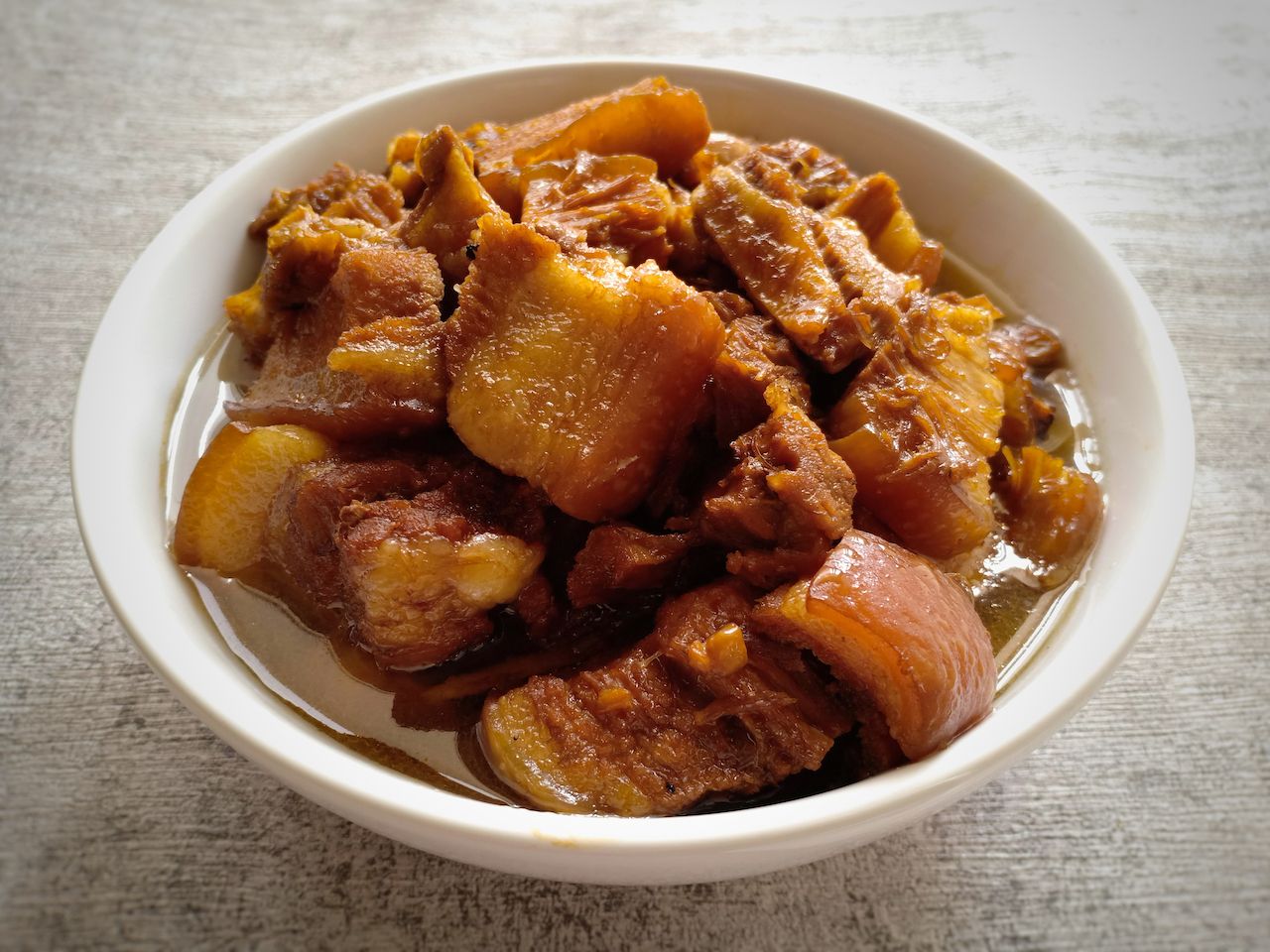 This dish of diced pork braised in Indonesian sweet soy sauce, or kecap manis, gets layers of rich pungent flavors from ginger, shallots, chilis, and garlic. Popular among Dutch and Chinese Indonesians, the aromatic herbs and spices are first cooked in a pan like a wok. The meat is browned and covered in thick, molasses-like kecap manis, and slow cooked for at least an hour. Pork belly is the preferred cut, and, as Lee writes, the resulting dish should be “fragrant and sweet,” and the pork cubes caramelized from cooking in the kecap manis. 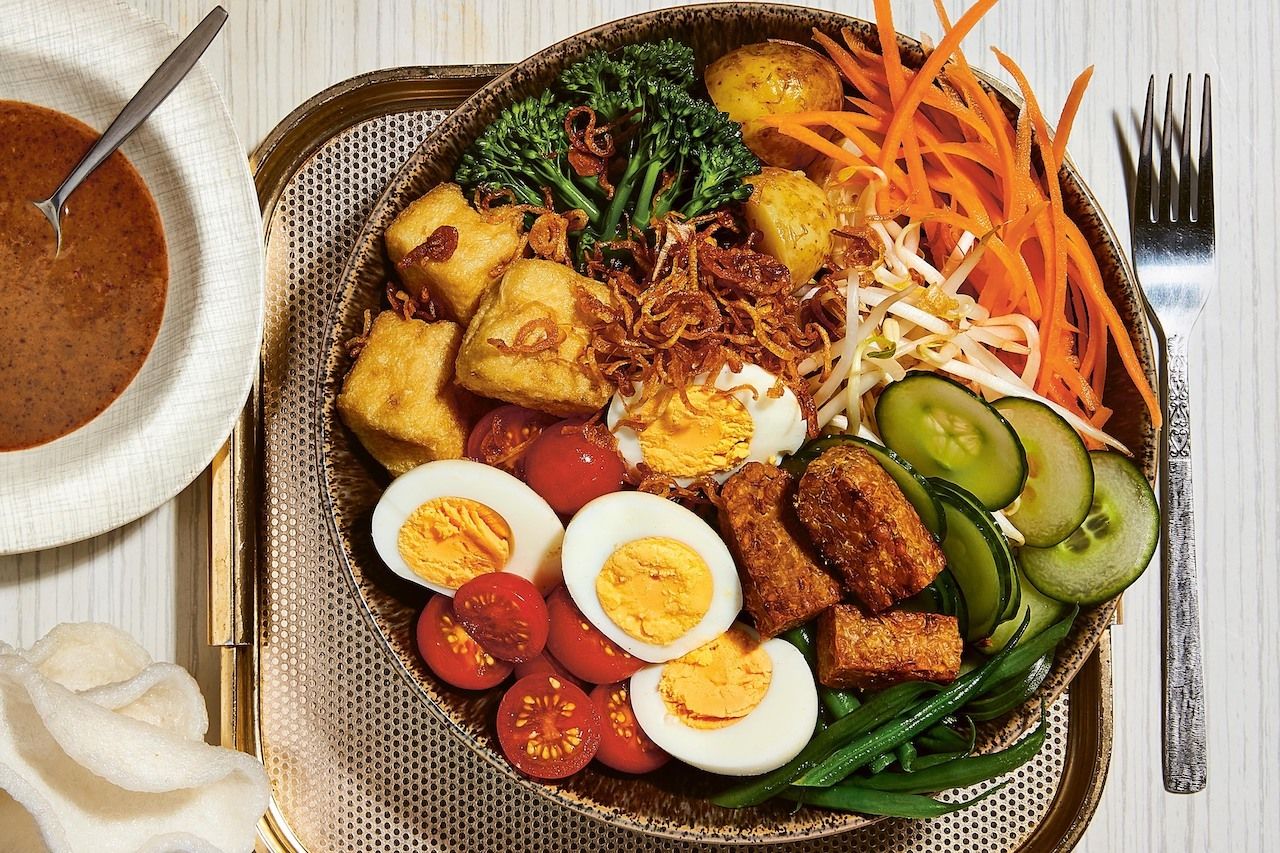 Likely the most famous Indonesian dish, gado-gado (which means mix-mix) is also the perfect introduction to the warmth and spice of Indonesian peanut sauce. Used as a dipping sauce or a dressing, peanut sauce is a simple concoction of red chilies, garlic, brown sugar, coconut milk, and, of course, peanuts or peanut butter. The gado-gado itself is a cooked vegetable salad, usually featuring slices of cucumber, boiled eggs, bean sprouts, carrots, lettuce, and tomato — but it’s easy to customize with your favorite vegetables. The key is to serve it topped with crunchy kerupuk, which are deep-fried Indonesian crackers that come in flavors like garlic, shrimp, or prawns. 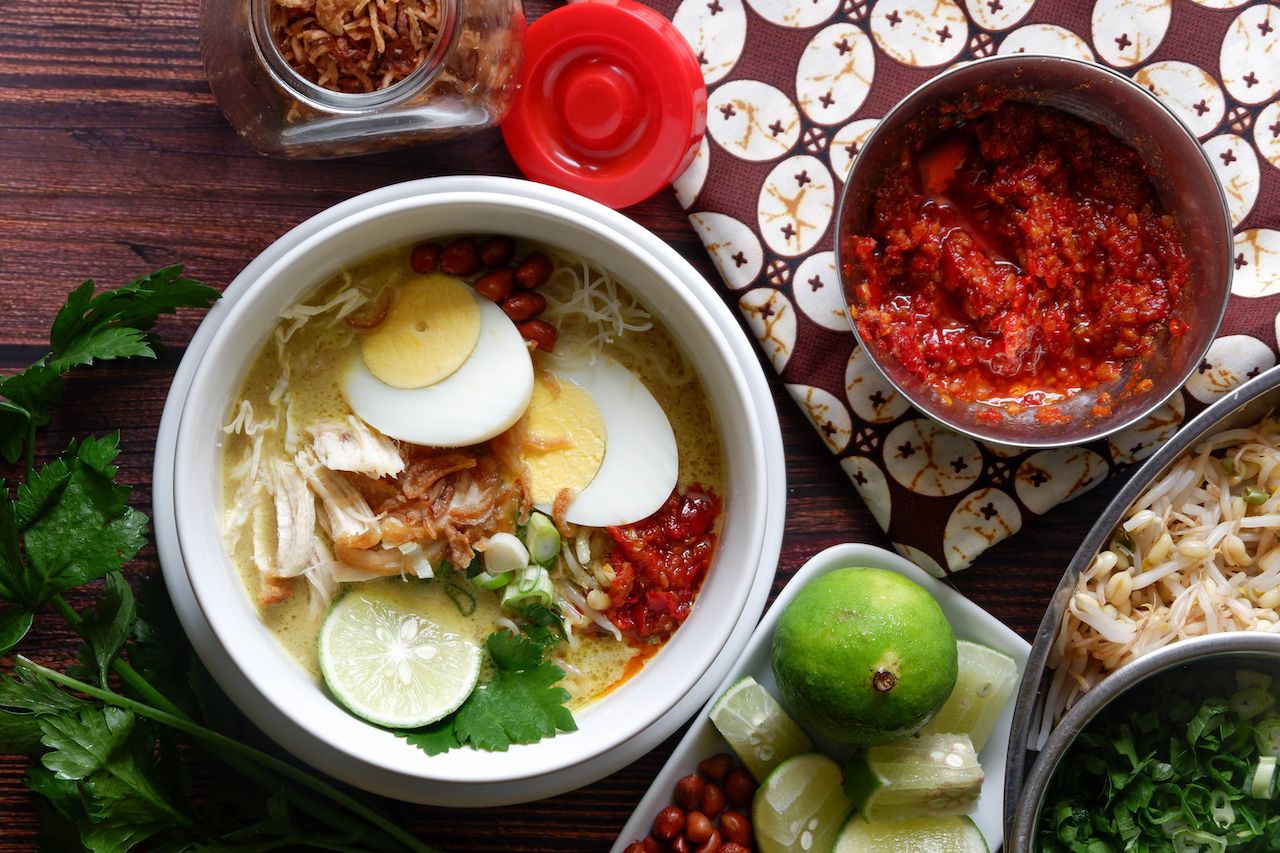 The Indonesian take on chicken soup is a complex mix of bean sprouts and other bright vegetables, vermicelli noodles, and shredded chicken. Seasoned with turmeric, garlic, shallot, and coriander, soto ayam is typically topped with a boiled egg and lime wedges and is served with a side of kerupuk.

Soto ayam is a favorite for breakfast. Indonesians from all over the archipelago, from Surabaya on Java to Sumatra, prefer a heavy bowl of hearty soup as their first meal of the day. During her travels, Lee watched as they lined up outside street food stalls for their bowls of noodle soup.

“All these commuters on their way to work, they want this heavy noodle dish before they head to the office,” Lee tells me. “In Indonesia, a heavy breakfast is not unusual. It’s really celebrated. Breakfast culture is a big thing.” 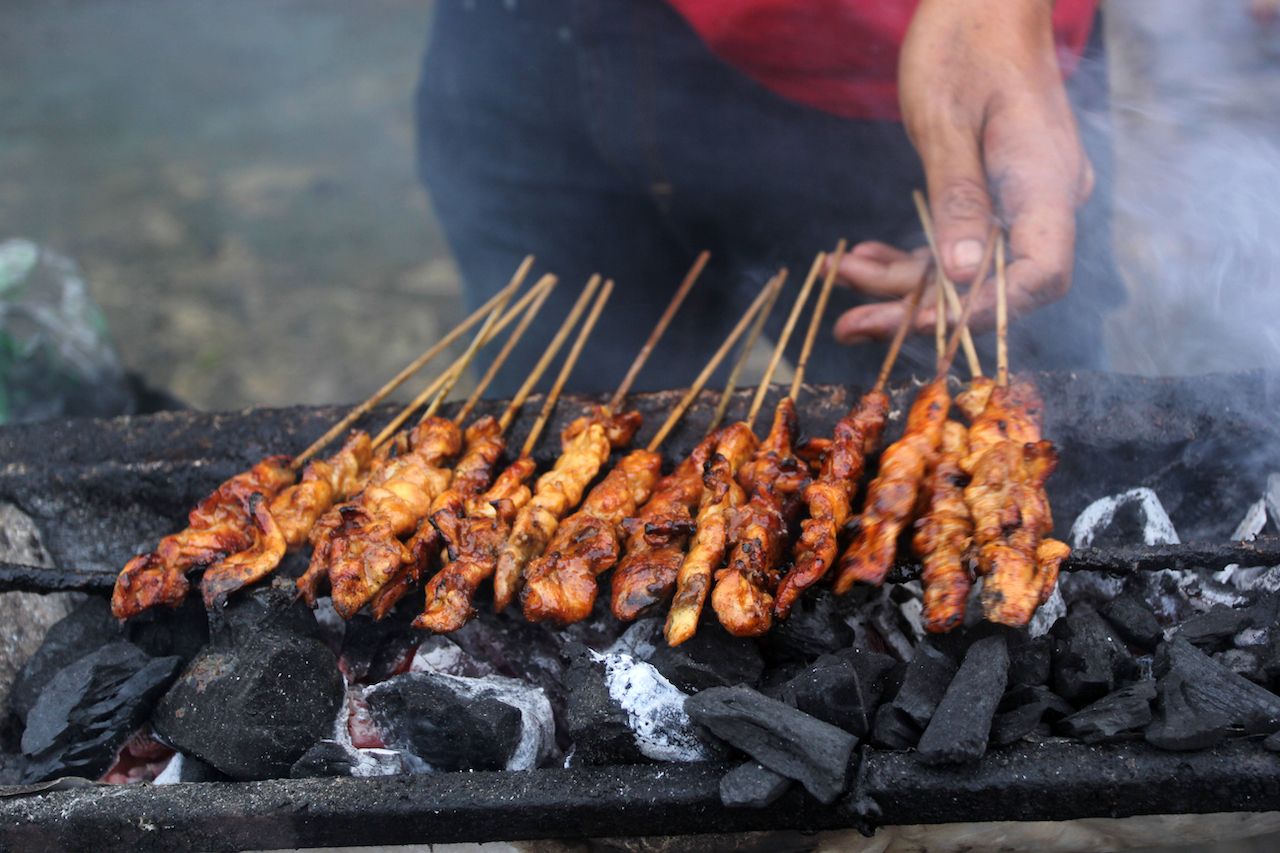 In Bali, satay is sometimes prepared as an offering to the Hindu gods, but many people are familiar with this simple grilled chicken appetizer because it appears on the menu at many Thai restaurants. In Indonesia, chicken satay is one of the most popular and ubiquitous street foods in the country, and it’s served on banana leaf with rice. Two sides add depth, spice, and tang: peanut sauce for dipping and a handful of pickled cucumbers. 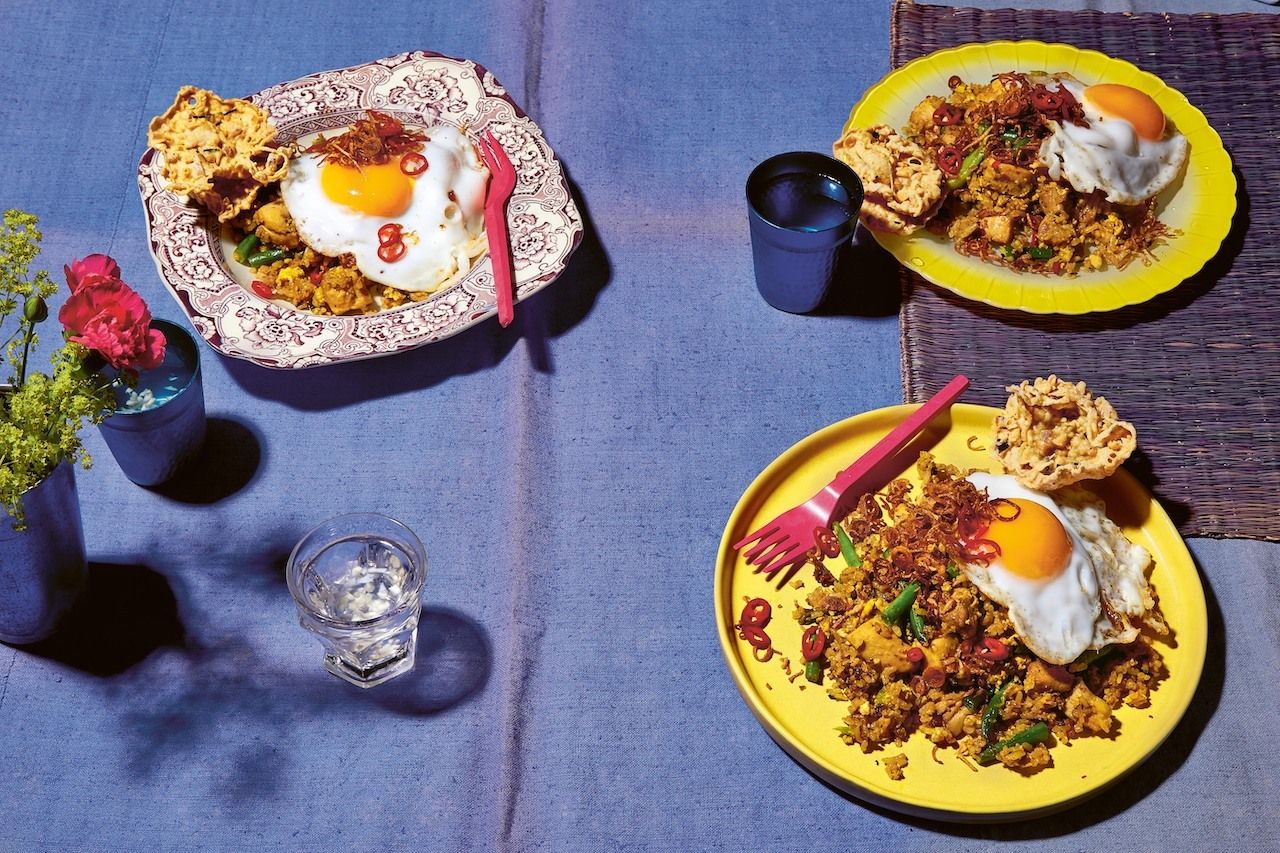 Of nasi goreng — the Indonesian spin on fried rice — Lee writes, “You would be hard-pressed to visit Indonesia and not find a variation of [this] nationally loved fried rice dish on restaurant menus.” Served any time of day, many Indonesians consider nasi goreng “the greatest of comfort foods.” It’s usually made by combining stori fried rice with a spice paste and kecap manis with vegetables, tofu, or a meat like chicken. It’s topped with a fried egg and served with a side of kerupuk. 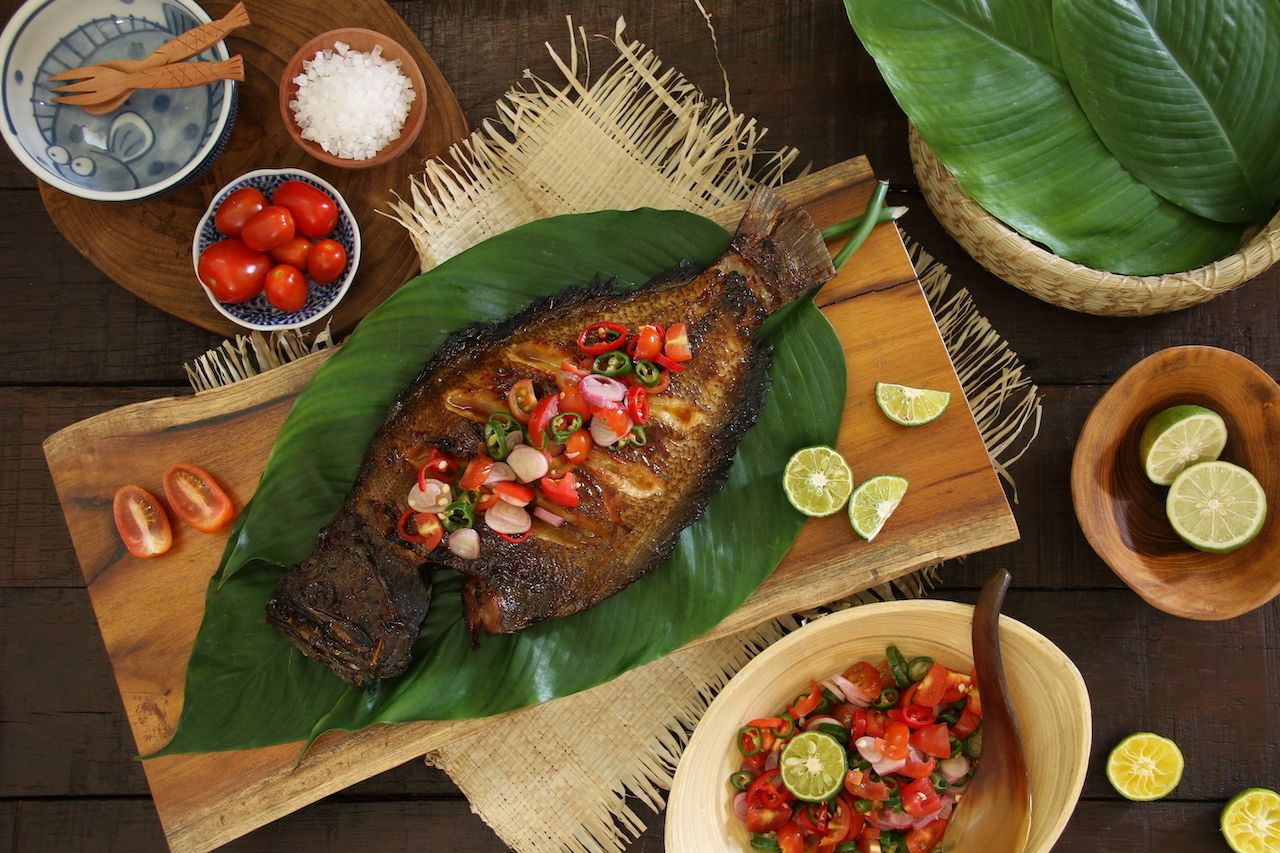 The upside to Indonesia’s proximity to the ocean is that fish is abundant throughout the country, and it’s often cheaper and easier to access than red meat. Ikan bakar is one of the simplest seafood dishes in the country: A whole fish is seasoned with lime juice, then wrapped in banana leaves and cooked over charcoal. Like most dishes in Indonesia, ikan bakar is served alongside a dish of sambal; Lee prefers a mild but zesty tomato sambal or Balinese sambal matah to accentuate the tangy citrus flavors. 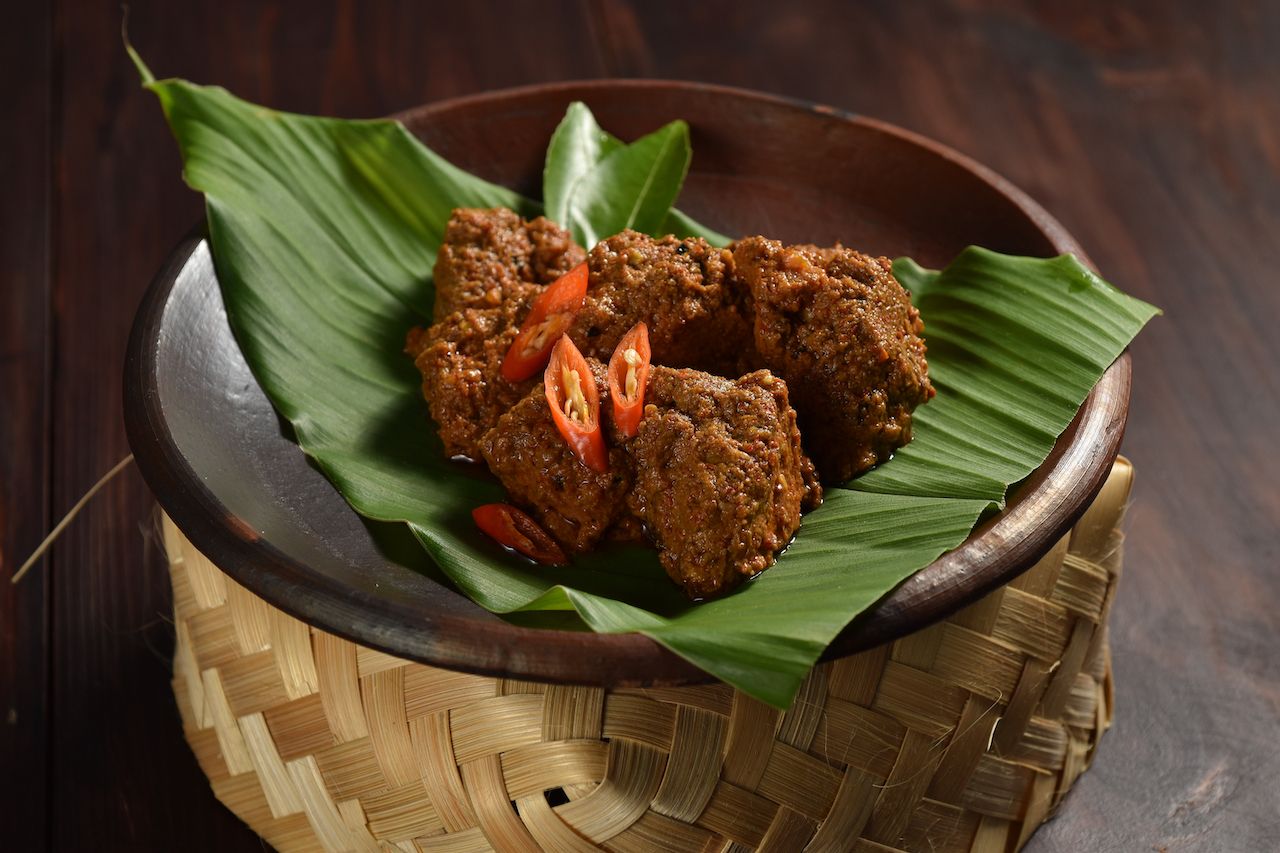 In her caption on the many beef dishes of Indonesian cuisine, Lee writes, “Take note that the Indonesian way of cooking meat will require you to throw all your culinary techniques out the window. Meat is rarely browned in a pan before being thrown into a stew, and Indonesians don’t typically marinate meat overnight.” Lee speculates that these cooking methods are functional, one offshoot of the fact that many households didn’t — or still don’t — have refrigeration until recently.

Rendang, a “caramelized dry coconut curry” of cubed beef or buffalo, exemplifies traditional Indonesian cooking techniques. The dish originated in Padang, West Sumatra, home of the Minangkabau people. In this matriarchal society, mothers cook batches of rendang for as many eight hours (far longer than the typical rendang dish you’d make at home) until the texture gets close to that of beef jerky. Sons are sent on far-flung journeys to find their fortune, as Lee puts it, toting their rendang around in a biscuit tin as a reminder of home.

Food + DrinkRempah Is the ‘Mother Sauce’ of Malaysian Cuisine You Need To Know
Tagged
Books Food + Drink
What did you think of this story?
Meh
Good
Awesome