The basic arepa is a pancake-shaped ground corn bread that’s grilled, fried, or baked and stuffed with a variety of ingredients. It can be sweet or savory, simple or complex. However it’s prepared, it’s a beloved food in South America — particularly in Colombia and Venezuela.

Arepas might be mistaken for a simple sandwich or a taco with a rounder shape, yet it is an altogether different beast with a rich history that begins in the Andes. The Timoto-Cuica people, a pre-Colombian civilization inhabiting the mountain range around what is now Venezuela, were probably the first to eat arepas. Though much of the now-extinct Timoto-Cuica culture remains mysterious, what is known is that they were expert farmers. They developed irrigation techniques and farmed on descending hillside steps (called terracing), which allowed multiple crops, including corn and cassava, to thrive.

The Timoto-Cuica people dried and ground corn to make an unleavened corn cake, the first version of the arepa. Originally, the indigenous people of South America chewed the corn into a paste and formed the arepa from the resulting dough well before mortar and pestle tools were developed. The cakes were then cooked on a pan called the aripo, which might be the source of the name arepa.

The concept of an unleavened bread wasn’t confined to the Andes. The Arawak people, who lived closer to the Caribbean, had their own precursor to the arepa, called casabe, which used cassava instead of corn. The true arepa, however, is made with strictly corn.

Once the Spanish conquistadors arrived in South America in the 15th century, the slow decline of these vibrant and flourishing societies began. Yet the arepa endured, in part because the Spanish took a liking to the snack, and quickly spread to the northern regions of South America.

That’s not the end of the story, though. The current ubiquity of the arepa is entrenched in the politics of 19th-century South America, when the continent demanded independence from the Spanish. In short, in the continent’s northern region, Simón Bolívar fought a revolution, ousted the Spanish, and established Gran Colombia, a region that would later split into several different countries, including Colombia, Ecuador, Venezuela, and, eventually, Panama.

When Colombia and Venezuela became autonomous countries in 1831, Colombia took the arepa with it. Colombians adapted the recipe, and the Colombian arepa became a dish all its own, separate from the original Venezuelan incarnation. A heated, though friendly, rivalry now exists between the two countries over who makes the better version. 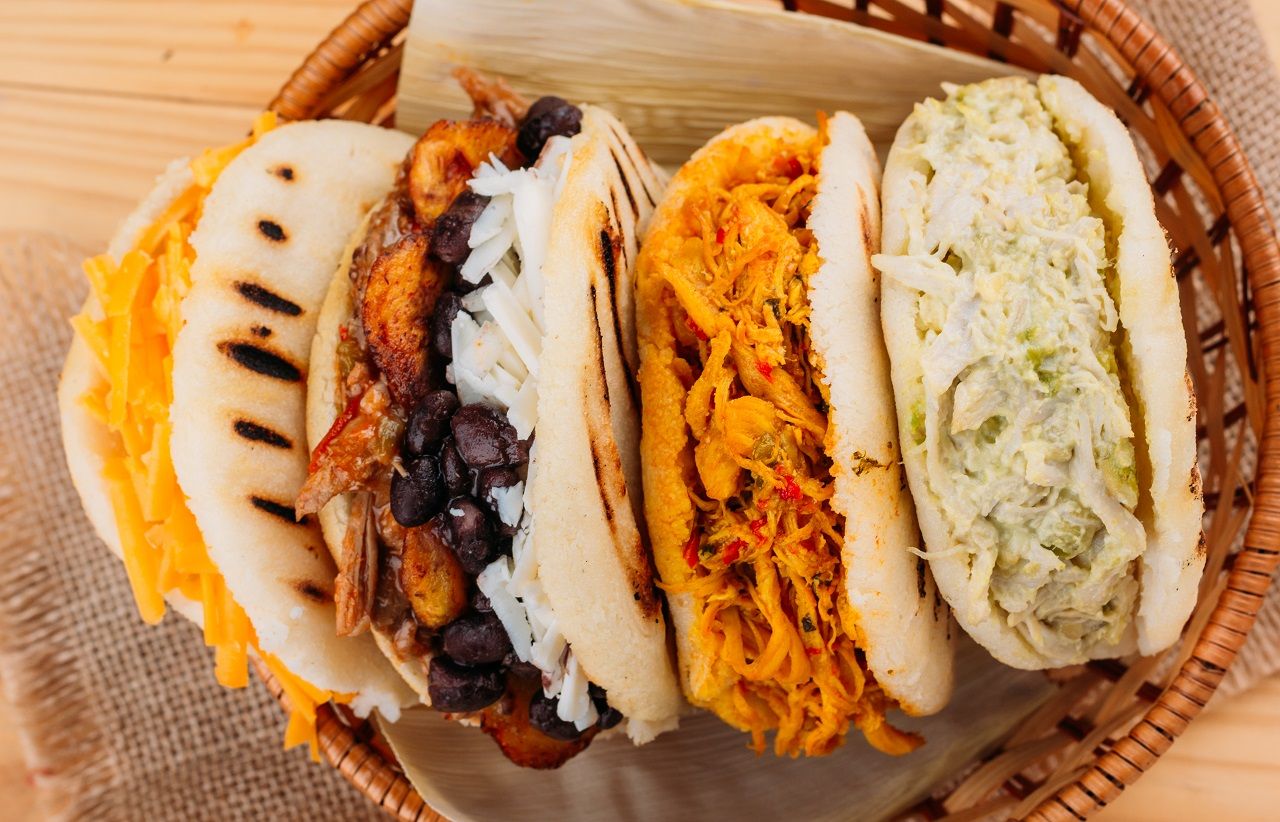 The Venezuelan arepa is a cake made from corn flour that can be grilled, fried, or baked. It has a texture similar to flat bread, and is typically thicker than the Colombian version. It’s a simple but beloved snack when eaten plain, and accompanies heartier meat dishes and stews when spread with butter or cheese.

In the 1950s, with the advent of a commercialized type of cornmeal called masarepa (manufactured by large companies like Goya), home cooks could simply add water to the mixture and voila! A super simple arepa dough became accessible to everyone. The popularity of the arepa exploded as a result, and that’s when it went from a humble corn cake to a widely varied, standalone dish, taking on the sensibilities of a sandwich with all types of fillings.

When the arepa is split open and stuffed with fillings like meat or cheese, it’s called an arepa rellena. Common fillings include black beans, cheese, plantains, shredded beef or chicken, and pork skin. The reina pepiada arepa, filled with mashed avocado, mayonnaise, and shredded chicken, is another favorite. 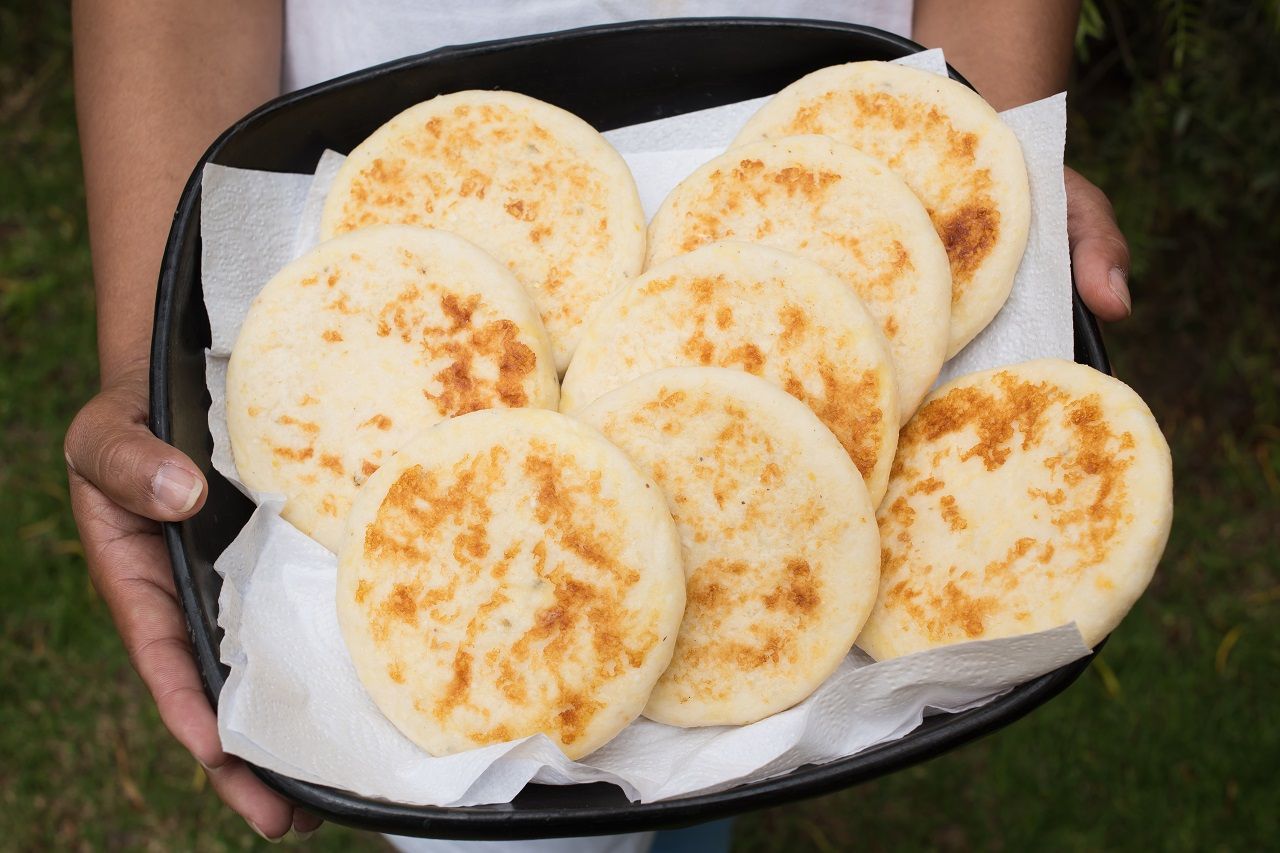 In Colombia, arepas are most commonly eaten with breakfast as a side dish, but of course can be eaten as an accompaniment to meals throughout the day. The ingredients tend to be a bit more sparse than in Venezuela. The corn cake is thinner and often sweeter. In most cases, the only filling is melted cheese. Colombian arepas are made without the addition of salt and oil, so the texture tends toward the dry side.

If more elaborate toppings, like shredded beef or queso campesino, are added to the Colombian arepa, it’s treated more like an open-faced sandwich (similar to a tostada) with the ingredients piled on top of the corn cake.

There are many varieties of Colombian arepas. The arepa de choclo has a little sugar in the dough, and is traditionally served alongside a cup of hot chocolate and topped with queso fresco; this version is also made with fresh corn, so it has a more vibrant yellow hue. An arepa de huevo is fried, then split open, an egg is cracked inside, and then the dough is fried again. And the arepa boyacense, which originated in the Boyacá region of Colombia, is stuffed with a type of milk curd called cuajada.

While the Venezuelan arepa might be most popular globally, there is no doubt that both versions have become staples of South American cuisine, beloved for their versatility and indicative of the region’s ancient and complex history.

Food + Drink23 Colombian Foods the Whole World Should Know and Love
Tagged
Food + Drink
What did you think of this story?
Meh
Good
Awesome