Yoga is certainly a flexible practice. Yogis young and old, new to the practice or advanced in their ability to practice asanas (physical posture), can find different types of yoga, teachers, and experiences that fit their goals, even if those goals are ever-changing. Since it was first practiced, yoga has grown like a tree with many branches, and as a result, there are many different types of yoga that you can try all over the world. There are some branches that challenge you physically, and others that don’t involve physical movement at all.

If you’re looking to add yoga to your next vacation or trip, consider trying a new style of yoga. Exploring different parts of the body or styles of meditation can open your mind to a new way to connect with your physical body and the mind. Here’s a list of ten different styles of accessible yoga. The locations are merely suggestions; a quick Google search can help you find classes near you, retreats around the world, or even festivals that celebrate a unique style of yoga. 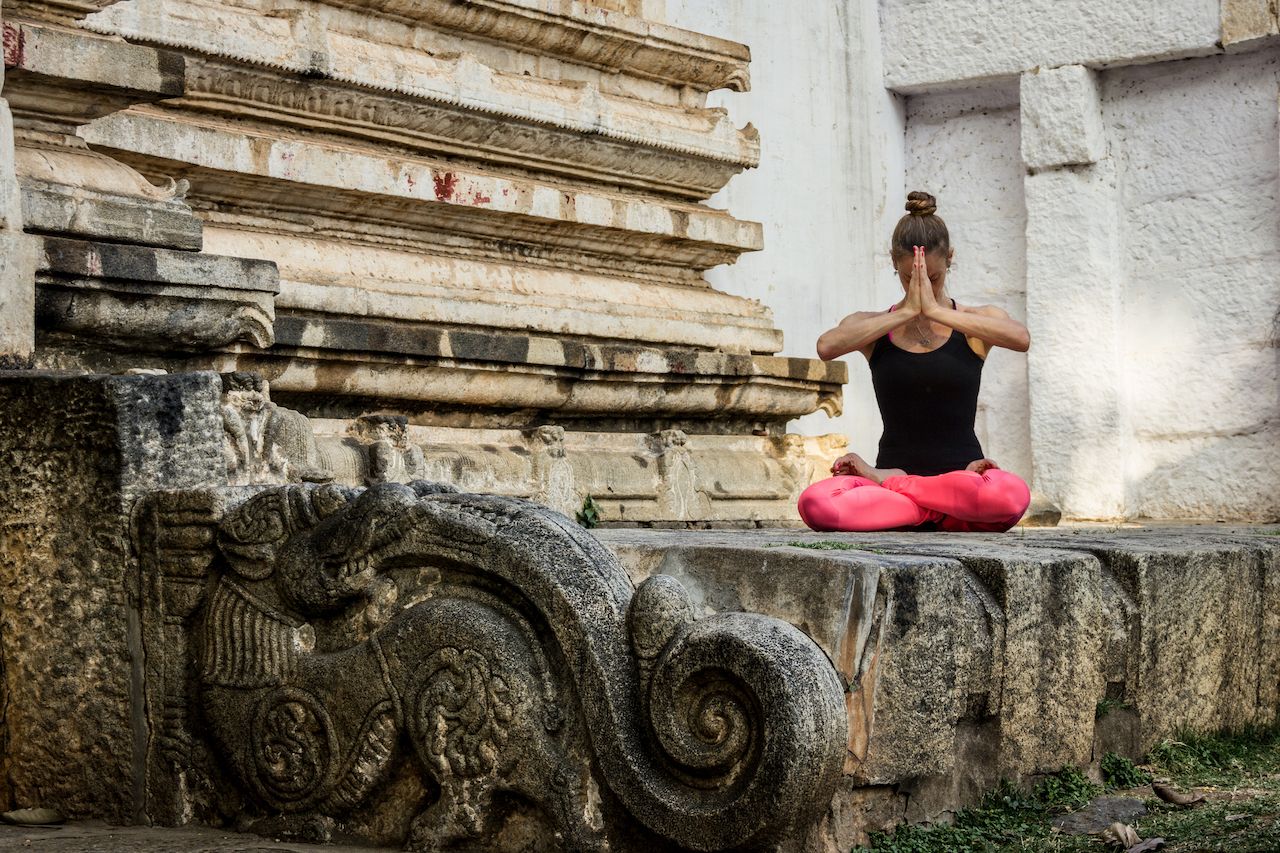 Ashtanga is one of the oldest yoga traditions. While ashtanga is a vigorous physical practice, it was developed as “yoga of the mind.” Ashtanga yoga consists of six series; each series includes a set of sun salutations, standing, seated, and closing poses. Mastering the first series can take years, and it’s recommended that yogis practice six days a week.

Mysore is a popular style of teaching ashtanga yoga, named after the place where it was developed. In the Mysore style, each individual completes a set of asanas at their own pace. They rely on their breath to move them throughout the different poses; the instructor will provide one-on-one instruction when appropriate.

Many yoga practitioners complete their teacher training in ashrams throughout Mysore and India. Yoga was developed through spiritual texts in India and many teachers believe it’s most appropriate to train in the place where yoga began. 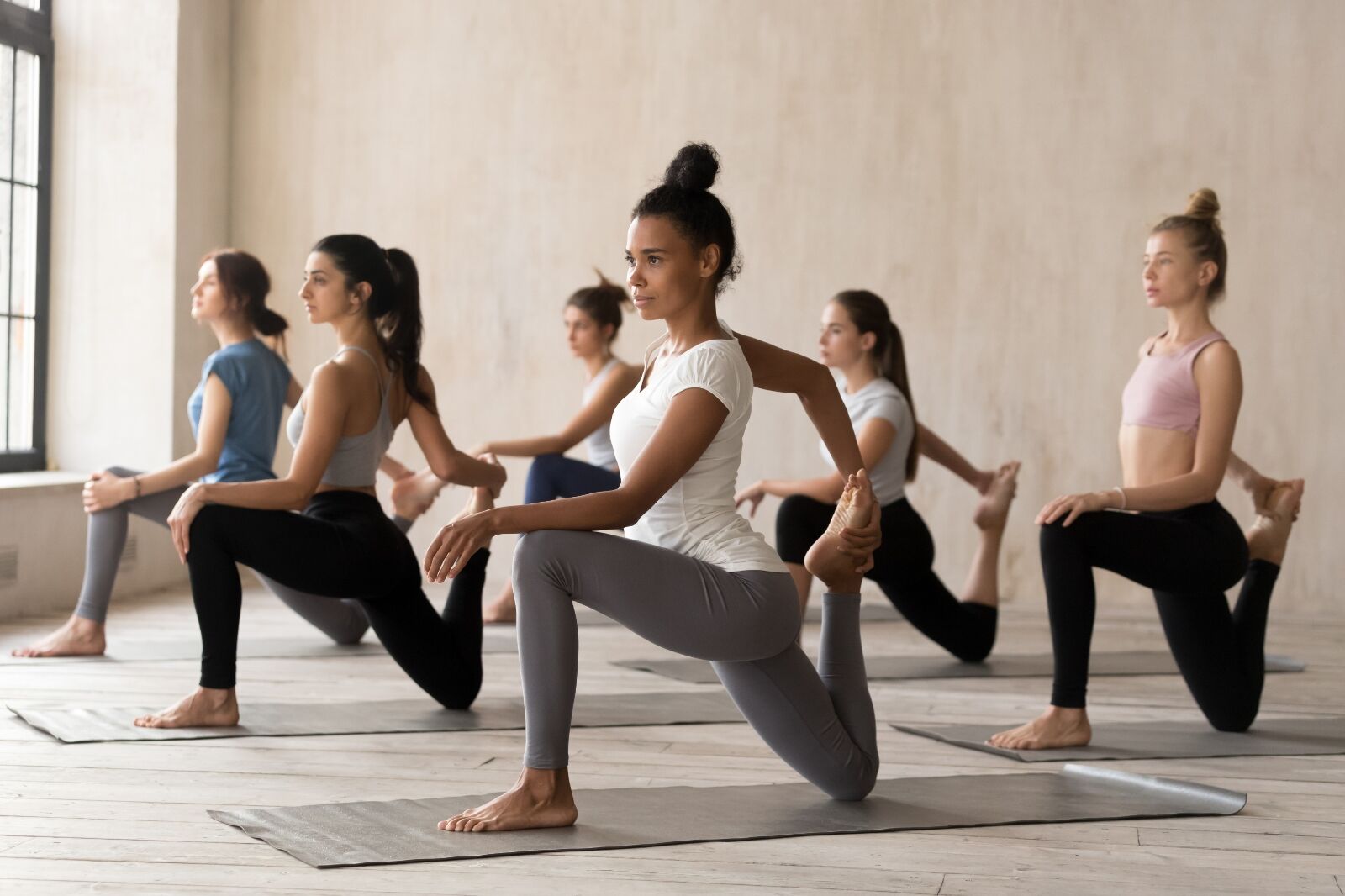 In the world of yoga, ashtanga begets vinyasa. Vinyasa is the type of yoga that most Westerners think of when they’re first introduced to the practice. Vinaysa is a Sanskrit word, meaning “connection.” Practitioners connect their breath with different movements throughout the flow, and there’s a lot of focus put into the physical body. Teachers will instruct the students to inhale and raise their leg or exhale and twist their torso.

While you may be able to expect a similar class if you go to a Bikram or a Kundalini class, teachers have more freedom to change the environment and style of their vinyasa class. Melbourne, for example, has a studio, Yoga 213, where hip-hop lovers can boogie and get their flow on at the same time. As yoga has become more popular, teachers have brought in animals, drinks, and other gimmicks to make the classes more fun and appealing to new yogis. Classes may also have a theme that will strengthen one part of the body or work toward a more advanced “peak pose.” 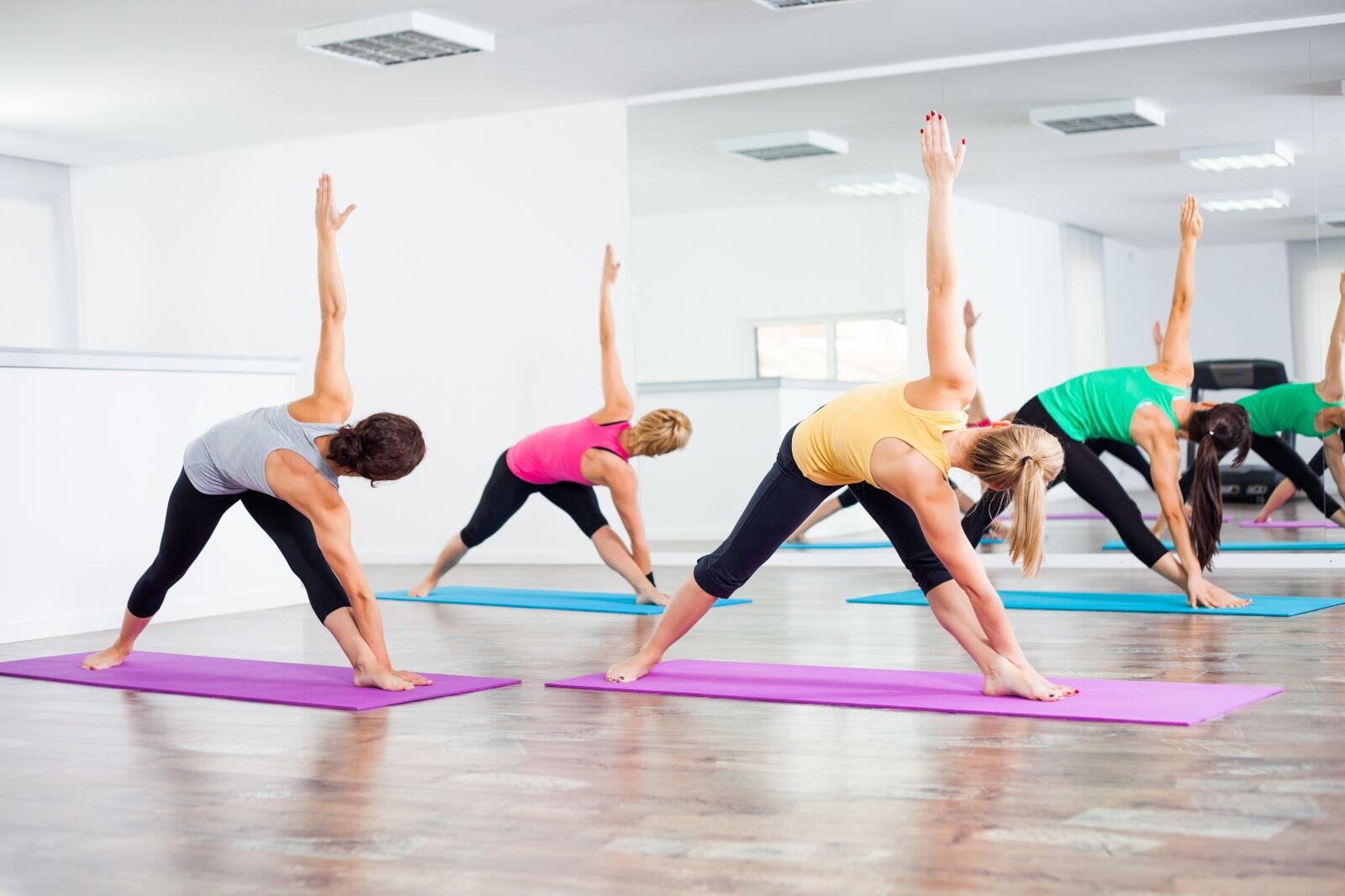 Bikram is the original form of “hot yoga” that’s offered in vinyasa classes around the world today. Bikram yoga consists of a rigid 90-minute practice that includes 26 asanas and two breathing practices. The practice is done in a room that’s heated to 40 degrees Celsius. Students sweat profusely throughout, and regular practitioners enjoy the feeling of getting a good workout after the practice is complete.

Los Angeles is the home of Bikram yoga; in the 1980s, Bikram Choudhury introduced the practice to Hollywood elite. Now, Bikram is practiced all over the world, but if you’re in Los Angeles, visit Modo Yoga LA or Set and Flow Yoga. 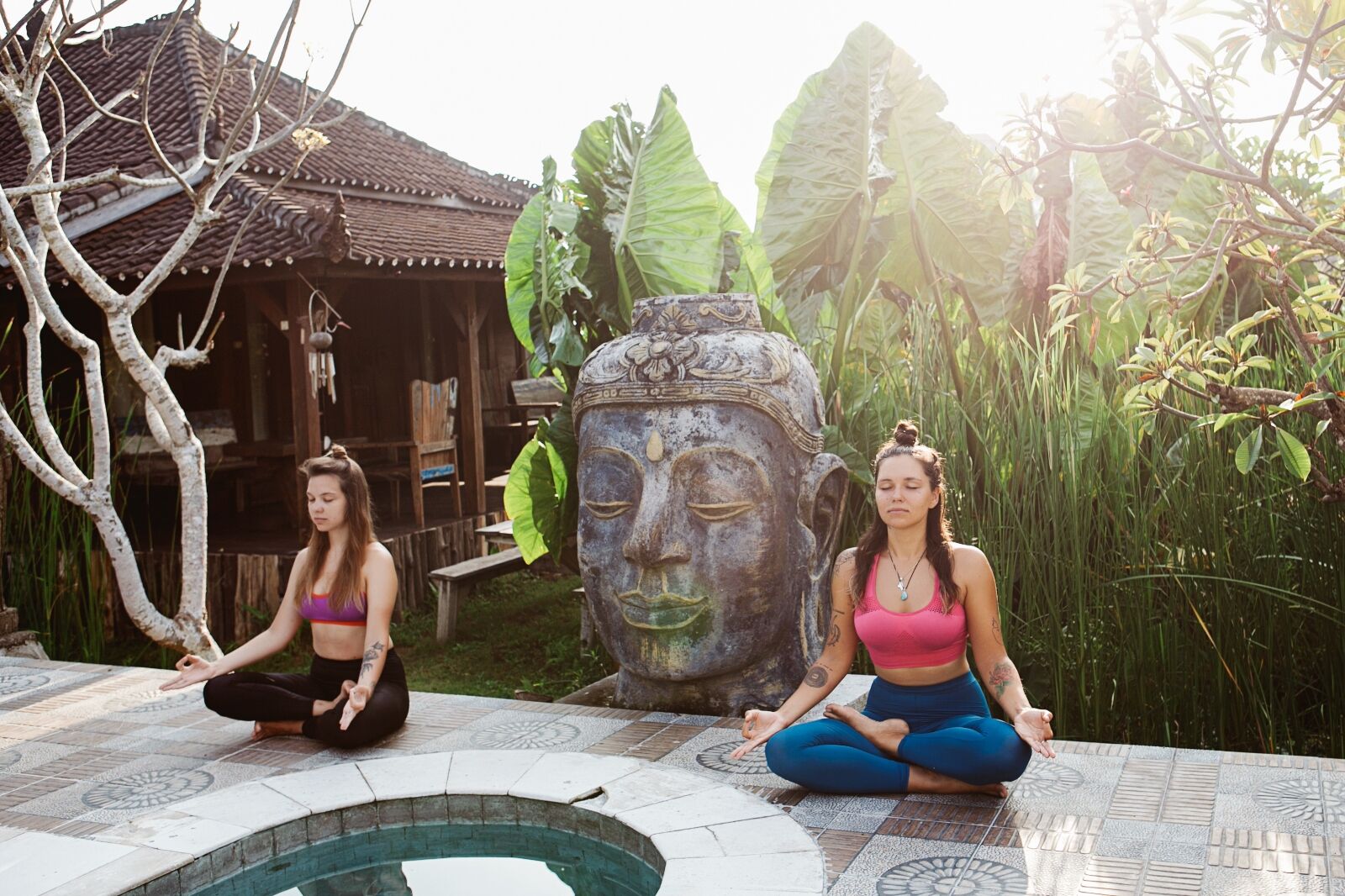 Yin yoga is an alternative to a sweaty, flowing practice. Rather than practicing with a yang (masculine, active, and hot) energy, yin takes a softer approach. Yogis hold poses that stretch out different areas of the body, but with a focus on comfort overreaching their “edge.” Each pose is held for at least one minute, and sometimes for as long as 10 minutes. Restorative yoga is a similar practice that puts an even stronger emphasis on comfort, relaxation, and restoring the body after an active day.

At the Yoga Barn in Bali, practitioners can attend a variety of classes throughout the day. Yin, restorative, and myofascial release classes offer a more relaxing 90-minute practice. Sound healings, yoga nidra, and meditation classes provide a similar sense of calm and relaxation without any movement at all. Bali, specifically Ubud, is becoming one of the hottest places for people to practice yoga and attend wellness retreats that include activities like yoga and surfing. The Yoga Barn is one of the dozens of yoga studios that vacationers can visit in Ubud. 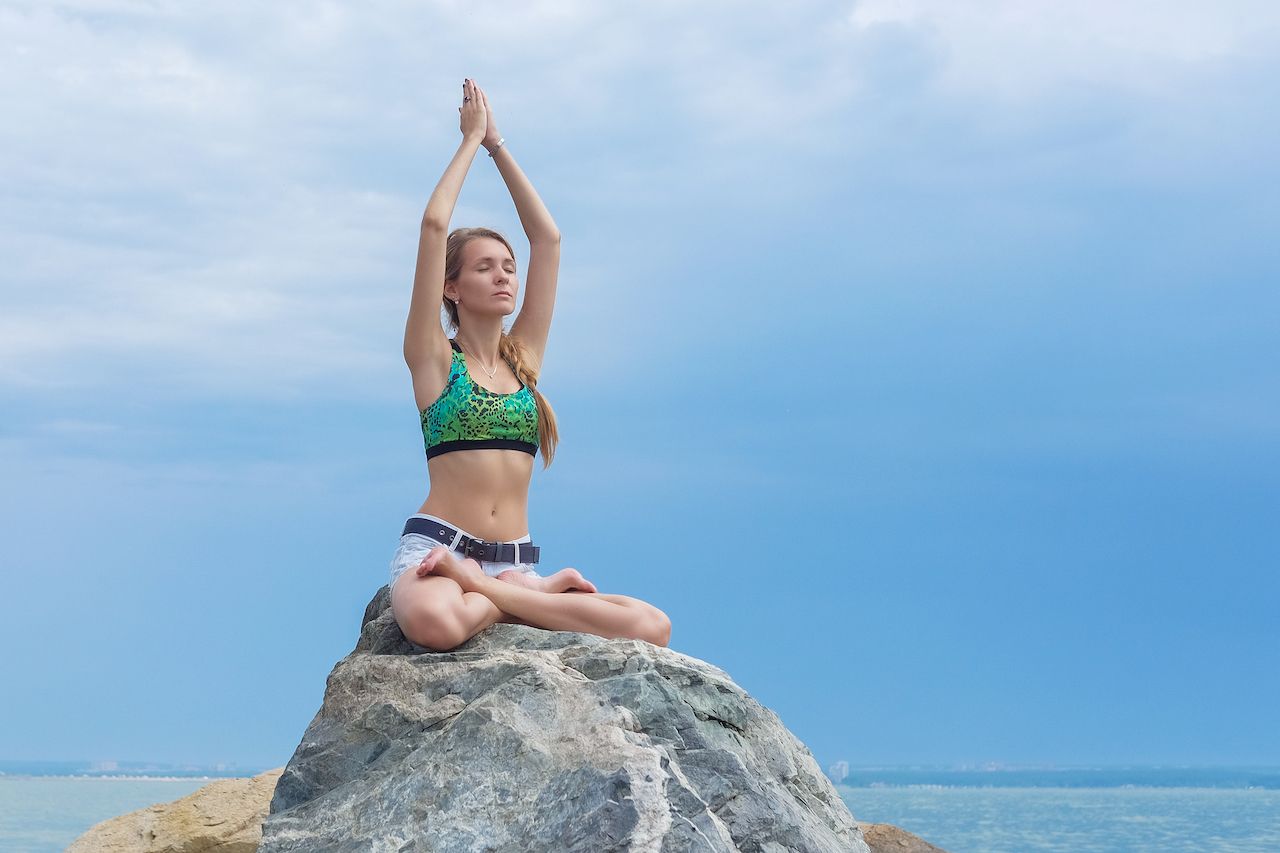 No matter what style of yoga you practice, breathing is just as important as the physical poses. Pranayama (breathwork) can work wonders for the physical body. In Kundalini yoga, practitioners complete different forms of pranayama, asana, and mantra to bring the feminine and masculine energies in the body together. Whereas ashtanga is “yoga of the mind,” Kundalini is “yoga of awareness.” Rather than sweating and flowing through different asanas, practitioners can expect to move through different mantras and meditations on the different chakras.

Costa Rica is the Western Hemisphere’s Bali; many yoga practitioners go to Costa Rica for yoga and wellness retreats such as Blue Osa. The Central American country is even home to yoga festivals, like Envision. Participants can attend workshops and classes taught by teachers trained in many different types of yoga. 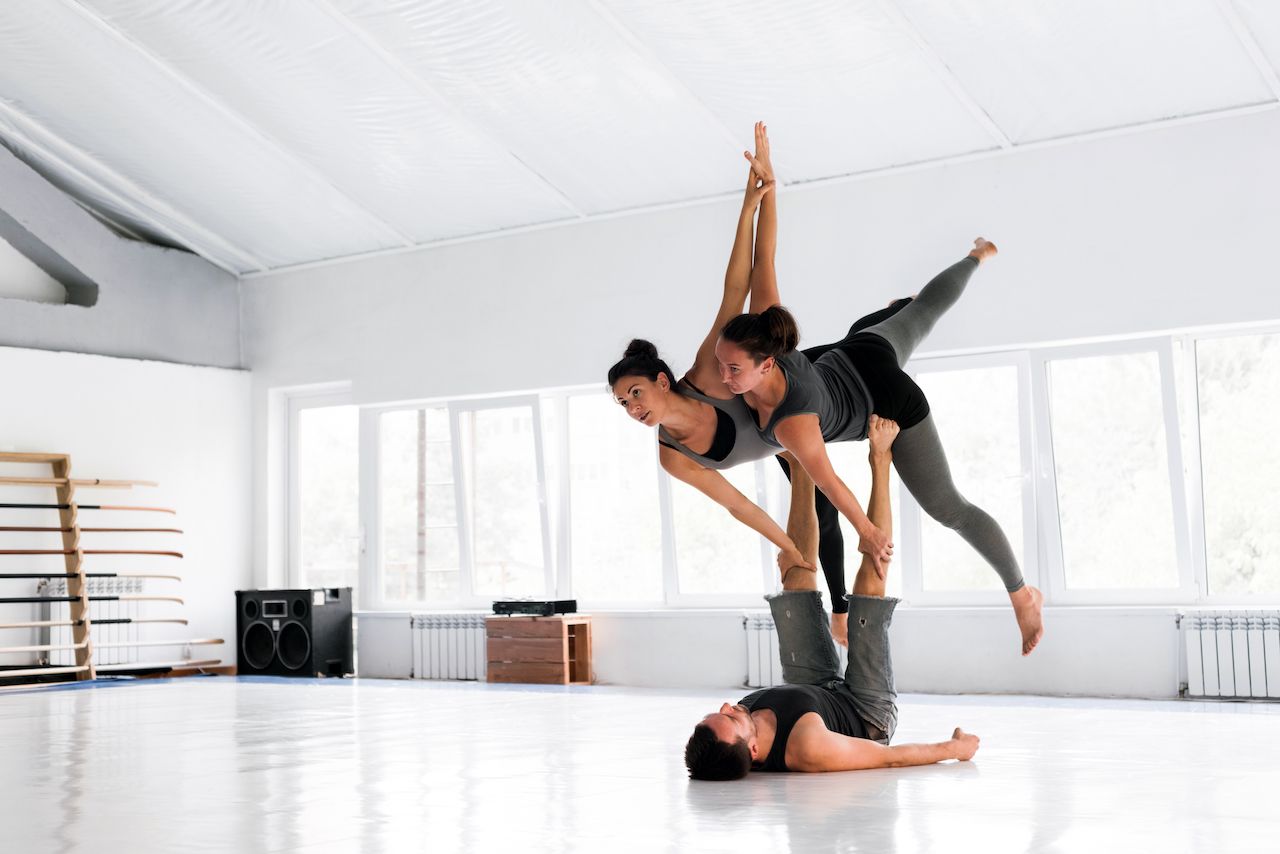 Acroyoga is an exciting combination of yoga and acrobatics that encourages a loving, welcoming community. Acro yogis meet up at “jams” to “play,” practicing poses in groups of two or even three. It’s a strong, often spontaneous practice where newbies and travelers can join in at a moment’s notice. Acroyoga is also a feature at many festivals around the globe and is also considered part of the circus arts community.

If you’re interested in acro, you can most likely find a meetup on Facebook. Tight-knit acro communities can be found in cities around the world. Vancouver has one of the biggest acro communities in the Western Hemisphere. Acro classes are taught weekly, and jams meet up throughout the city. Vancouver is also the home to a three-day acro fest led by over a dozen teachers. 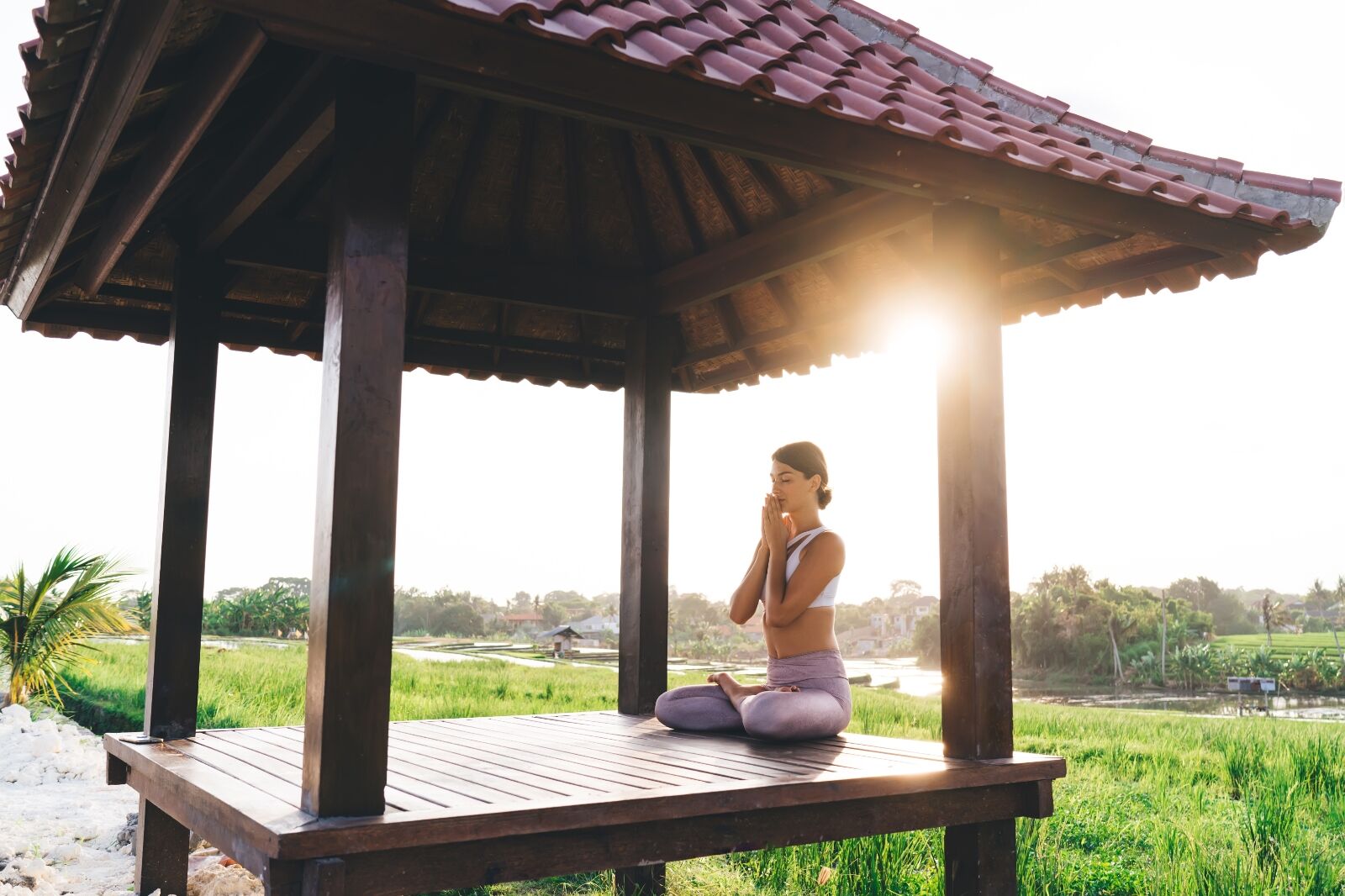 Hatha yoga is a very general term. It means yoga of the body — thus all yoga could be classified as Hatha. That said, if a class is classified as Hatha, you should expect a slow-paced, gentle practice that touches on all basic elements of yoga. The regular practice of Hatha yoga enhances strength, flexibility, and balance and may offer some light to moderate aerobic conditioning as well.

You’ll find Hatha in all yoga studios and most general gyms around the world. It is the most popular yoga practice. If you are interested in learning more about the foundations of yoga and how to become a yoga instructor, we recommend the teacher training course at One Yoga on the island of Koh Phangan in Thailand. One Yoga has one of the best rosters of international instructors in Thailand. 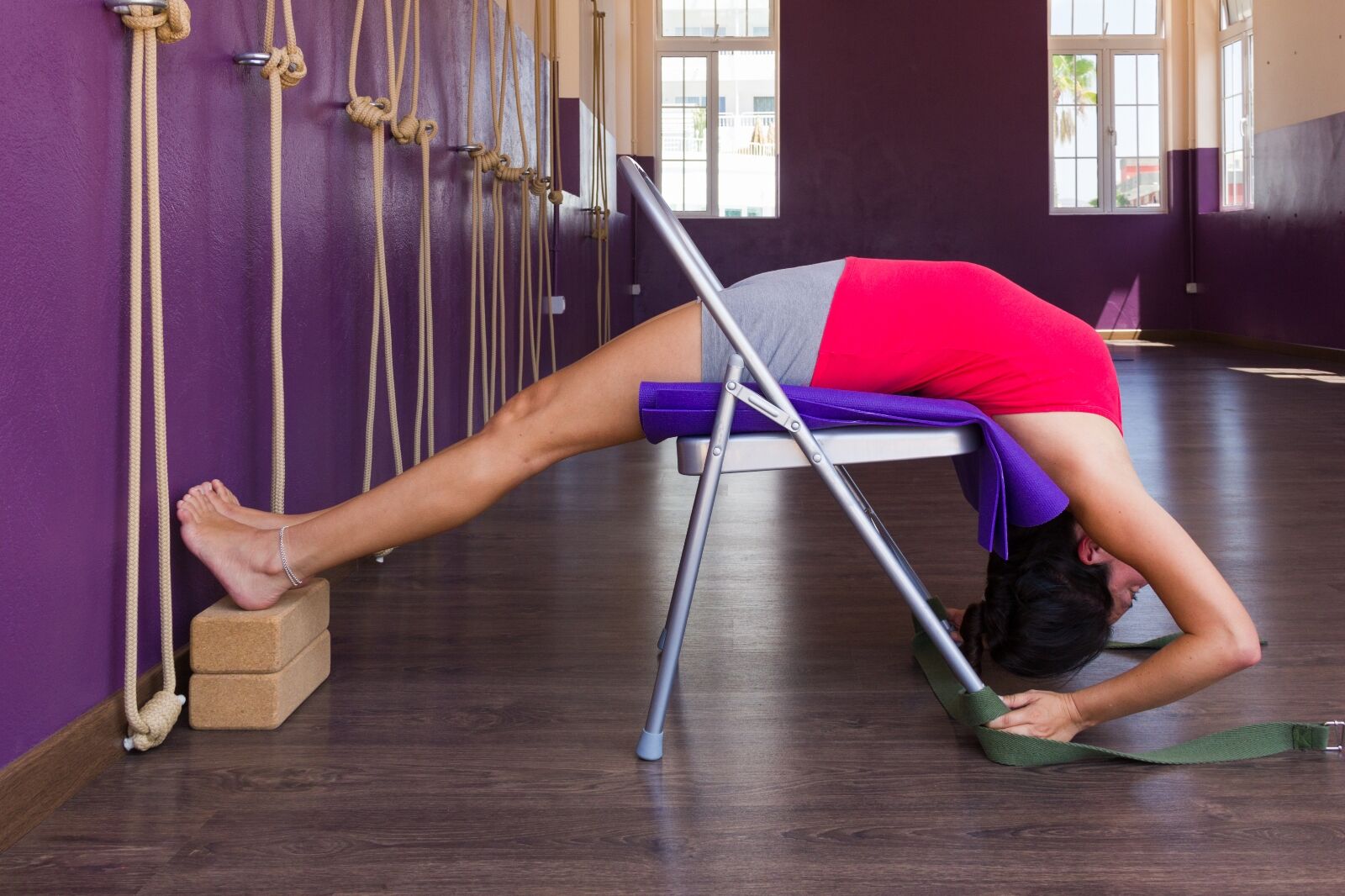 Iyengar yoga focuses on three elements: alignment, sequencing, and timing. Iyengar yoga poses are held for long periods of time and if it is safe to do so, it is encouraged to deepen the intensity. This type of yoga is great to improving flexibility and strength over time.

It is very important to make sure yogis are listening to their bodies during an Iyengar practice and work to personal limits. That’s why we recommend investing in yoga teacher trainings. This one at GypSea Yoga Scohool in Puntarenas in Costa Rica is a superb option. Their courses touch on all elements from yogic philosophy to the art of sequencing and adjusting, which is particularly important in an Iyengar practice. 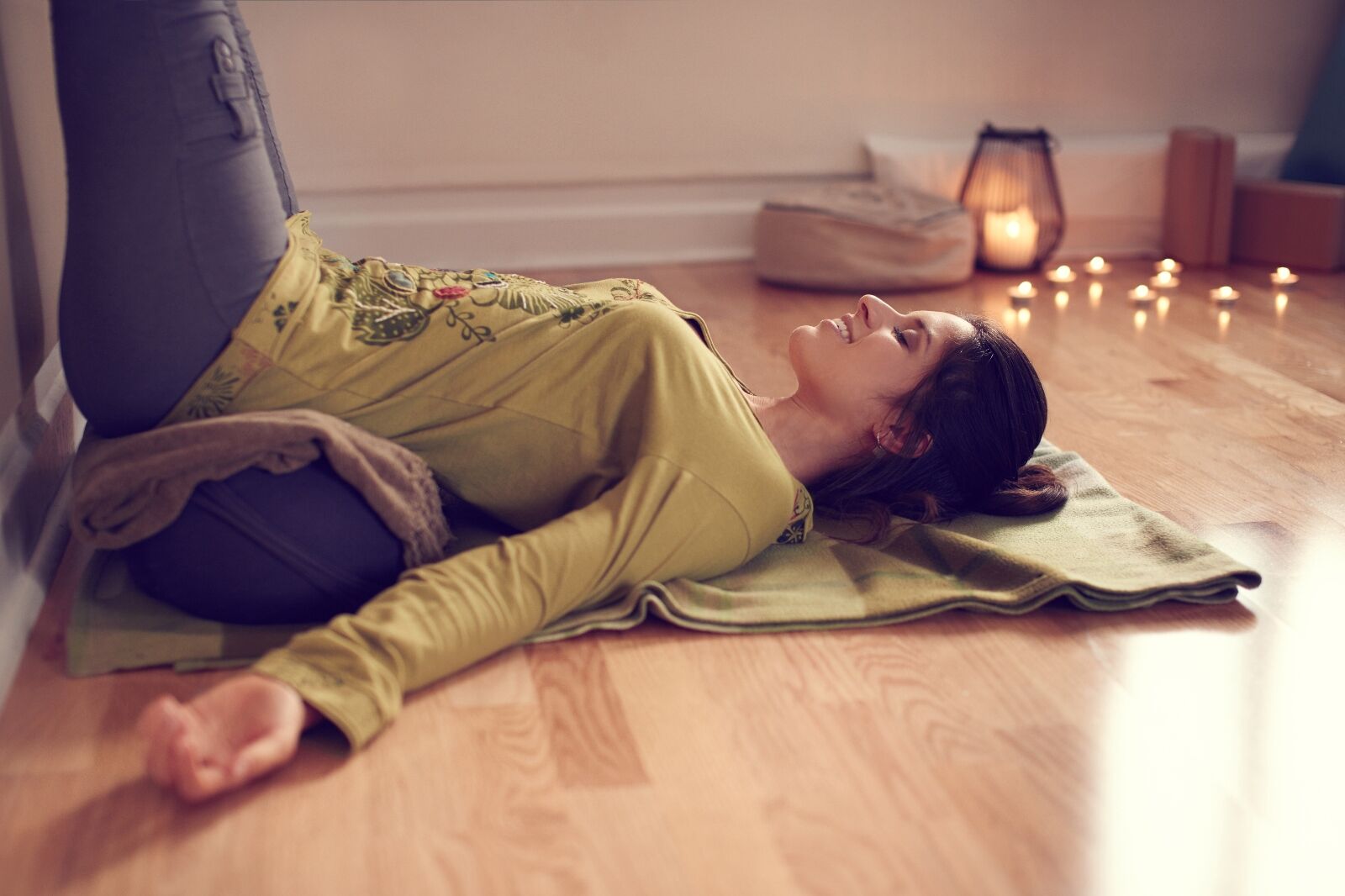 All yoga studios will have a restorative class to complement more physical sessions. If you have an interest in learning more about the benefits of this style of yoga, have a look at Ramila Patel Yoga. The highly rated retreats are run in London but also on location in Avenida da Fonte Santa in Portugal and Marrakesh. 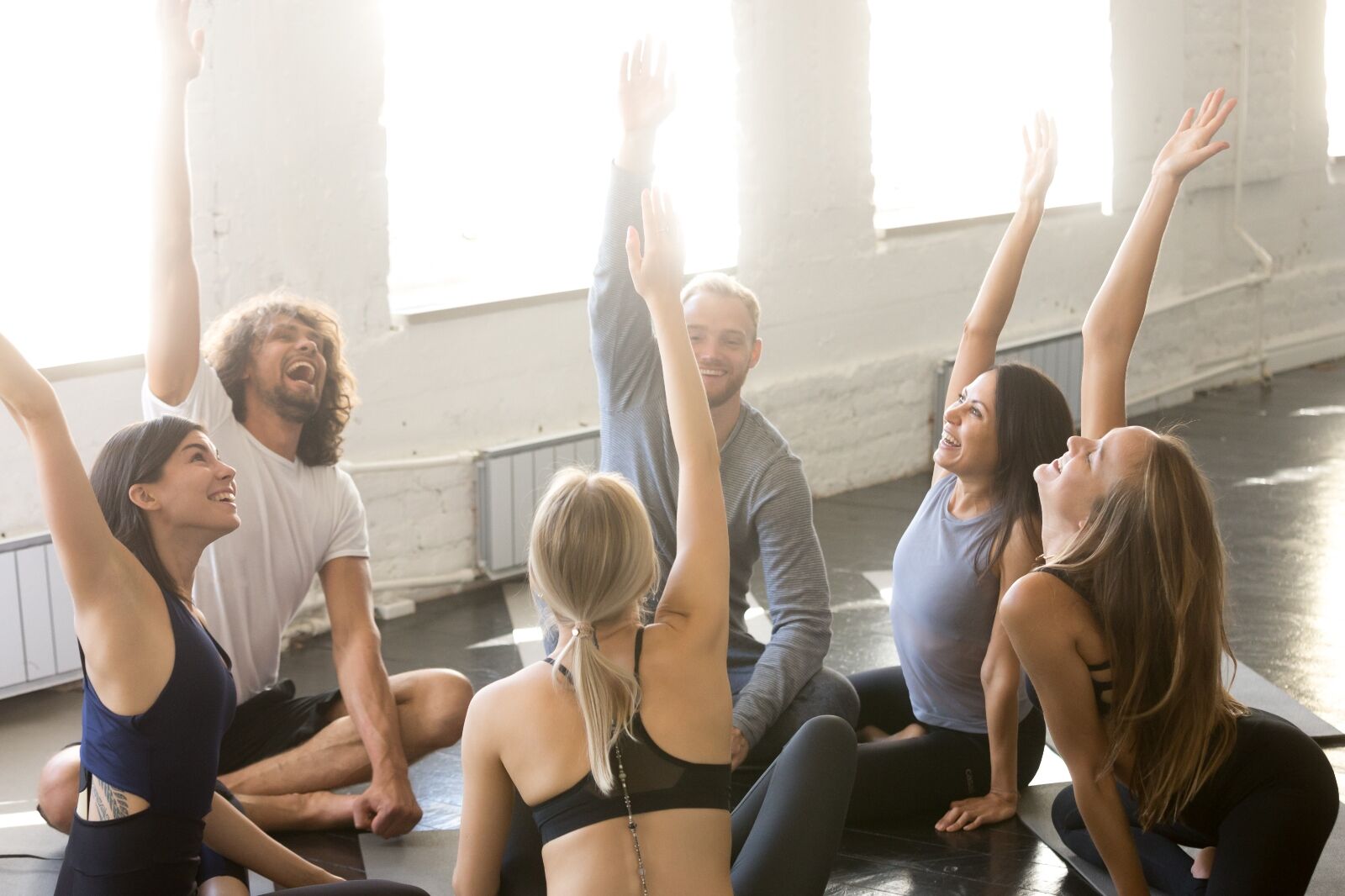 Laughing yoga is gaining popularity worldwide. And considering the current global climate and the fact that laughter is contagious, it’s understandable why. The basis of this yoga practice is to use breathing exercises to cultivate joy, bring out your inner child, and help you let go of daily life stressors.

There are over 5,000 clubs worldwide that offer classes, but one of the most popular in the UK is this organisation that offers classes and courses. Many of these are offered in London, but there are pop-up options throughout England.

How many types of yoga are there?

There are various types of yoga. And again, the styles mentioned above are just a small representation of the yoga world that’s accessible to beginners. If the next city you travel to offers a style of yoga that you’re unfamiliar with, give it a try. Every yoga class is an opportunity to deepen the connection between your body, mind, and soul.

Which type of yoga is most popular?

Hatha yoga is the most popular. You can do a home yoga practice or you’ll find Hatha yoga being taught at most general gyms and all yoga studios. As mentioned, Hatha touches upon all the major elements of yoga including breathing, body awareness, and mediation.

What is the hardest type of yoga?

Many consider Bikram yoga to be the hardest type. But most yogis will agree that each practice can be as hard or easy as you need for your own body and mind.

What is fast yoga called?

Fast yoga is called Rocket yoga. We’ve not listed Rocket yoga here on our list because it’s a relatively new “practice”. Rocket yoga is derived from Ashtanga and was developed by Larry Schultz in San Francisco in an attempt to make Ashtanga yoga more accessible to westerners.

What is the easiest type yoga?

Hatha yoga is the easiest type of yoga because its well-rounded structure means anyone from a beginner to a more advanced yogi can enjoy a general class. Slower-paced classes such as Hatha yoga and Restorative yoga are the better options for entry-level yogis.