When you think of the Berkshires, it’s likely your mind goes straight to Massachusetts — and stays there. We get it. Mentions of the “Berkshires” nearly always refer to the western Mass highland known for its mountain views, picturesque towns, and blazing fall colors. But we urge you to get to know the other Berkshires, which have just as much beauty and brilliant fall foliage, but far fewer visitors. These Berkshires are right across the state border in northwestern Connecticut.

Where are the “Other” Berkshires? 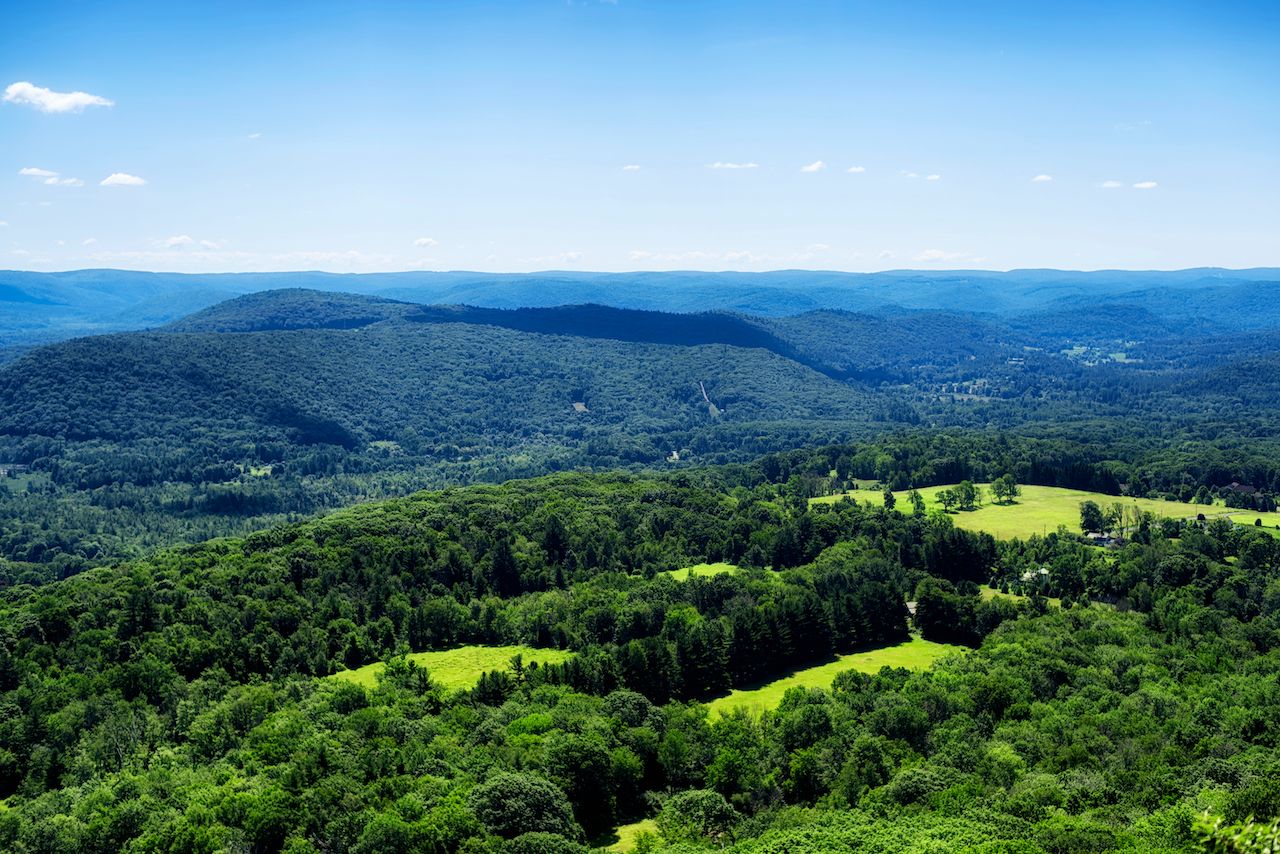 The Berkshire highlands are a mountain range within the larger Appalachians that span parts of western Massachusetts and northwest Connecticut. The stretch of Berkshires in Connecticut stretch from the Upper Housatonic Valley to the Berkshires’ foothills in an area called the Litchfield Hills or also the Northwest Hills.

The diverse nomenclature explains the non-awareness about the Connecticut Berkshires. The highlands here in this northwestern portion cross over to eastern New York to the east and, obviously, the famous Massachusetts Berkshires to the north. Within Connecticut, the loveliest part of the Berkshires are those in Litchfield Hills, dotted with 21 towns, many quite picturesque, in a rural portion of the state.

What makes the Connecticut side particularly appealing is not just its natural beauty but also the fact that it’s infrequently visited by both local residents and out-of-state travelers compared to its neighbor. The “other” Berkshires cover less area but do pack a big punch in terms of history and outdoor options.

The Litchfield Hills are only an hour from New Haven, and 2.5 hours from either Boston or New York, and we can’t recommend a better place in Connecticut for tranquility, views, and a whole lot of hiking opportunities.

Hike to the highest point in Connecticut 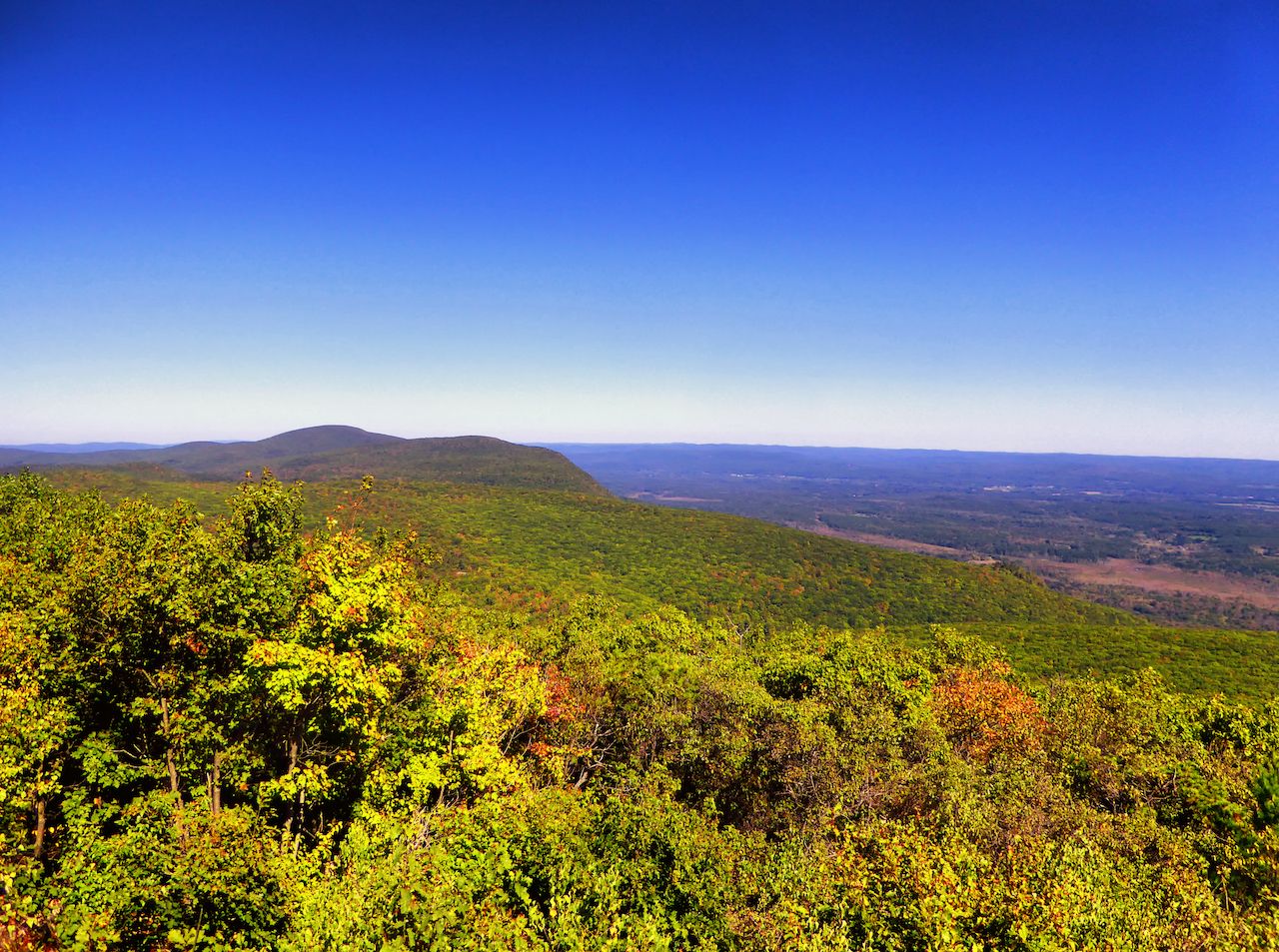 Near to the quaint town of Salisbury you can have the epic experience of hiking to both the highest summit and highest elevation point in the Nutmeg State. Along a slightly long, tree-lined dirt road, you’ll find the starting points for both treks. Bear Mountain is Connecticut’s highest summit at 2,316 feet. The lush mountaintop is best visited in summers, particularly in July when you should be able to spot some wildflowers. From the parking area, it’s a three-mile ascent to the summit, on what’s known as the “Under Mountain Trail.” The trail is well-marked and easy to follow, but steep.

After bagging a peak, continue on to see the plaque that marks the Connecticut high point of 2,380 feet. There’s no view here, but it’s a fun and offbeat thing to do to reach both Connecticut’s tallest mountain and the highest point within the state. Then, continue onto Brace Mountain which has stunning views of nearby rural New York. There’s even a marked point along the trail, the CT/MA/NY Tri-Point, where all three states meet. 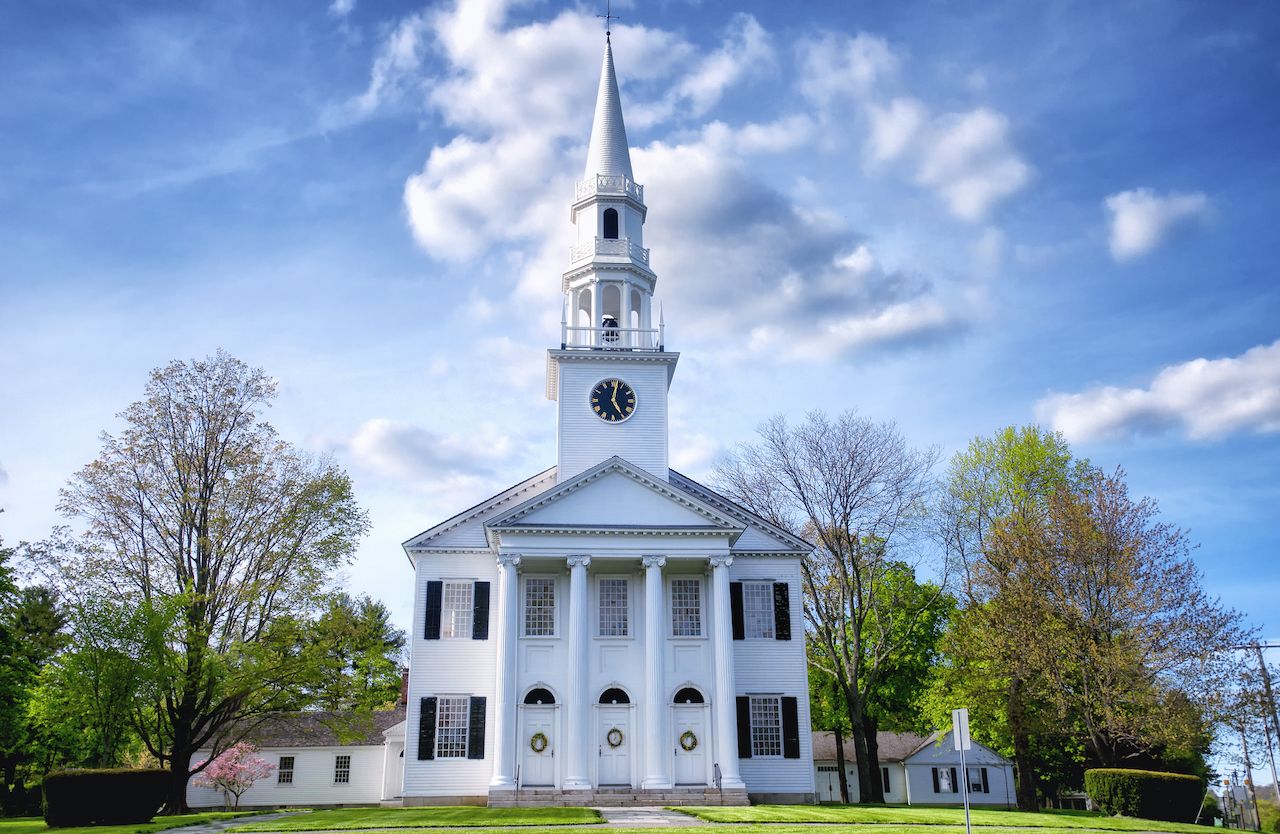 The Litchfield Historic District has been listed on the National Registry of Historic Places since 1968. The district is a realistic example of an 18th-century New England village, and some can’t-miss sights include its well-manicured village green, along with the Litchfield First Congregational Church, which opened its doors in 1721.

On North and South Streets you can gawk at large, white farm-style homes that have been standing for centuries, and on West Street you can get in some shopping, window or otherwise, as well as a variety of tasty eats. 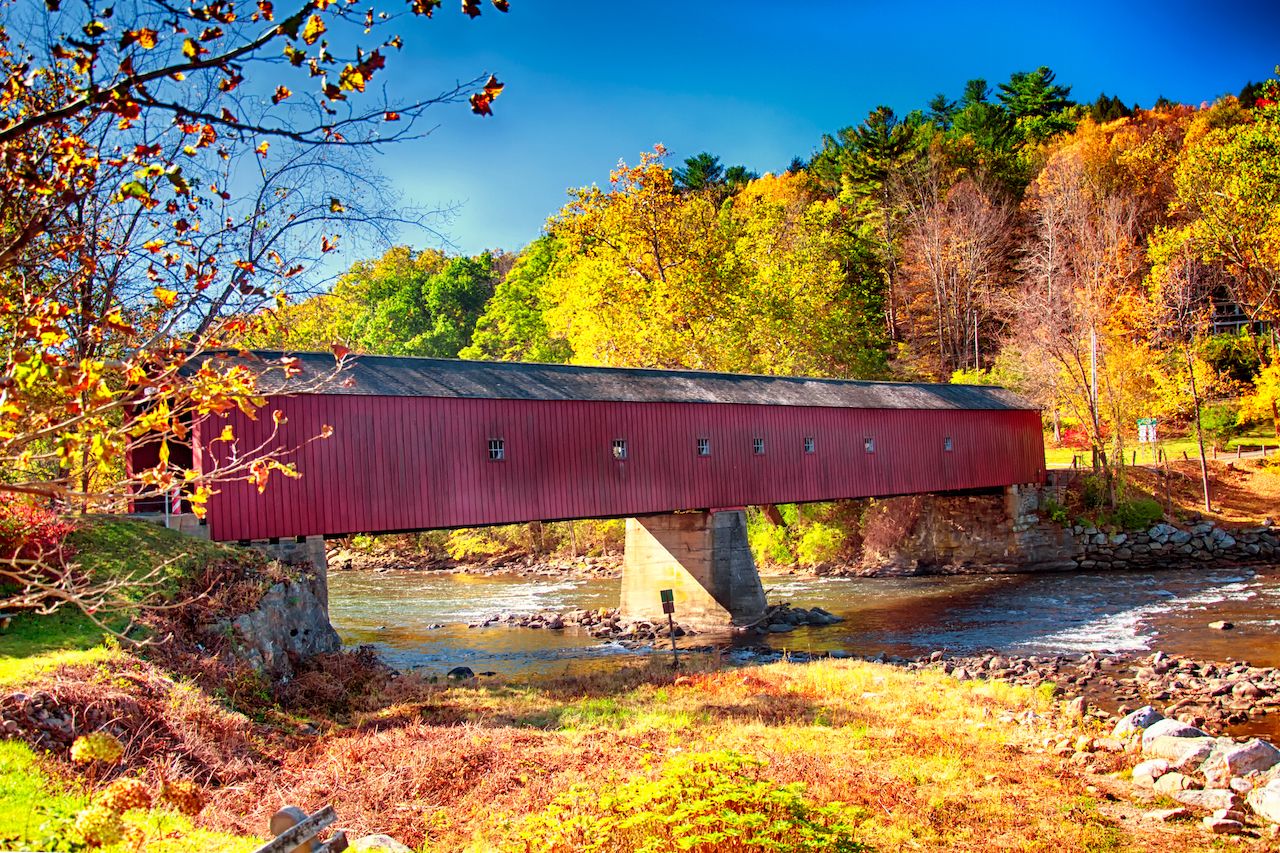 Historical covered bridges that look like small, barn-like tunnels are yet another unique cultural feature of the Connecticut Berkshires. When these bridges were built, they were covered not to protect those crossing the bridge from the elements but to safeguard the wooden bridges themselves from excessive moisture brought by rain and snow.

Today, these bridges decorate the landscape in these parts. A nice one to visit is Bull’s Bridge in Kent, which crosses the Housatonic River and measures up at a total length of 109 feet. It was built in 1842 and is listed on the National Register of Historic Places. You can also marvel at the West Cornwall Covered Bridge, located in Cornwall, Connecticut, thought to date from 1864. At 172 feet long, this is the longest covered bridge in Connecticut and has the striking appearance of a red farmhouse. 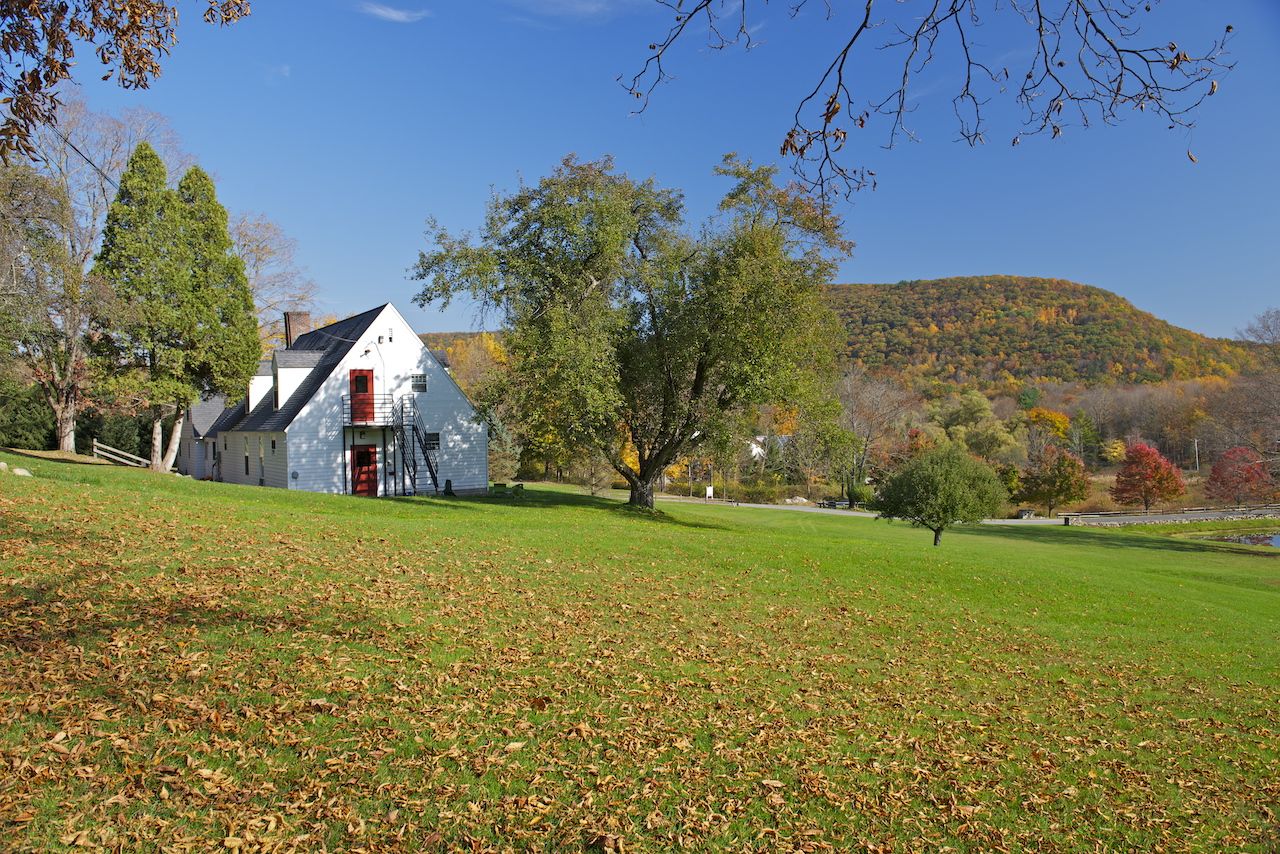 Kent is a small town filled with natural beauty, including several state parks. and despite all it has to offer, one of the sleepy village’s best assets are it’s nearly empty streets that cascade through aesthetically pleasing, New England style homes. Many are in the style of farm houses, with slanted roofs and painted in colors like rustic red, white, and blue. The Housatonic River runs through the town and offers many solitary, shady spots if you need a break from exploration.

Regardless of the day of the week, you can coast along Kent’s country roads via bicycle without having to worry too much about traffic. You can check out the trails at Kent Falls State Park, Macedonia Brook State Park, or perhaps mix up your day with a bit of hiking in addition to cycling. Kent has multiple hiking trails to choose from, including a 10+ mile portion of the Appalachian. If you don’t have your own bike, you can rent one from The Bicycle Tour Company, a helpful local business where you can also get some stellar route tips and itineraries for the entire region. 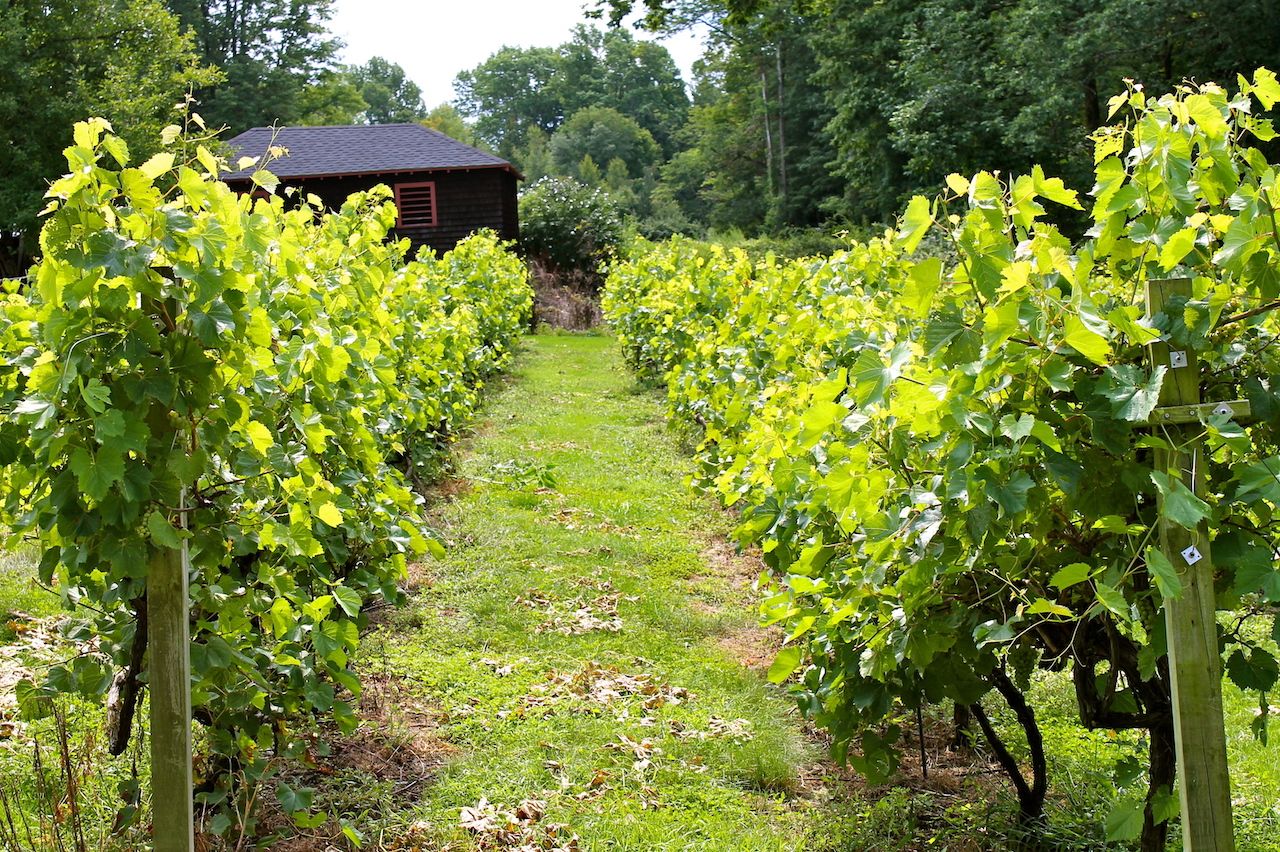 Connecticut might not be nationally known for its wine, but due to an ideal climate, numerous wineries have popped up all over in recent years as the industry continues to grow. And while wineries can be found all over the Nutmeg State, there are none more scenic than those peppered throughout its section of the Berkshires.

The Litchfield Hills lay claim to seven recognized wineries. While you can’t go wrong at any of them, the Hopkins Vineyard is my recommendation for those with limited time. Located in the town of Warren, Connecticut, it has some of the best views in the area to complement its selection of award-winning wines. 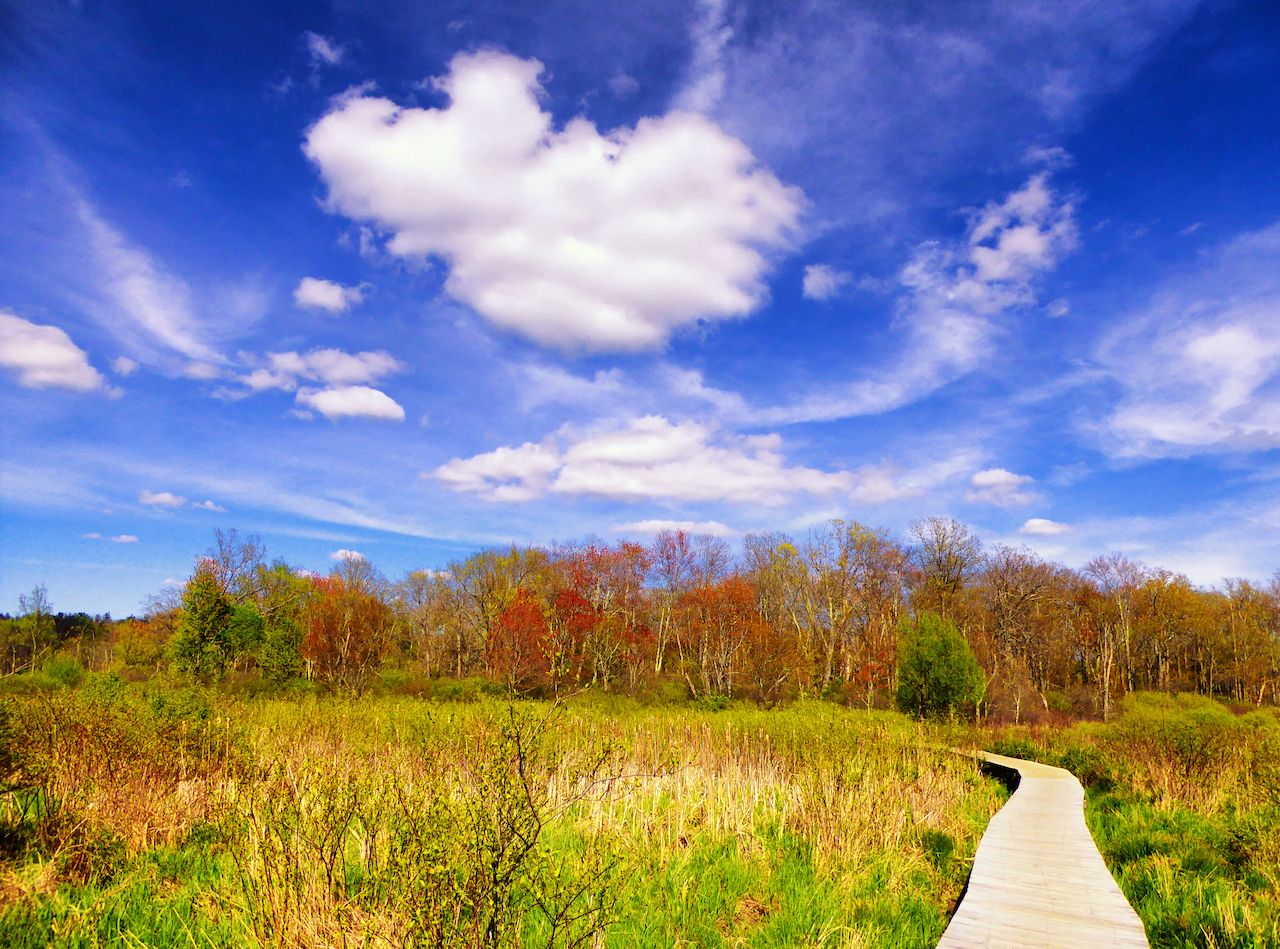 A 4,000-acre environmental education center featuring wetlands, trails, camping, and even a museum can be explored in Litchfield, Connecticut, the town after which the Litchfield Hills region is named. Established in 1964, this ecosystem features 10 different ponds and 40 different hiking routes through the forest.

The preserve also includes six miles of the nearby Bantam River, which you can cross by embarking on the 1.2-mile Little Pond route. This consists of a boardwalk that’s suitable for nature lovers of all ages. Mountain bikers can also explore many of the trails, which are peppered with informative signs about various wildlife and flora that call the center home. 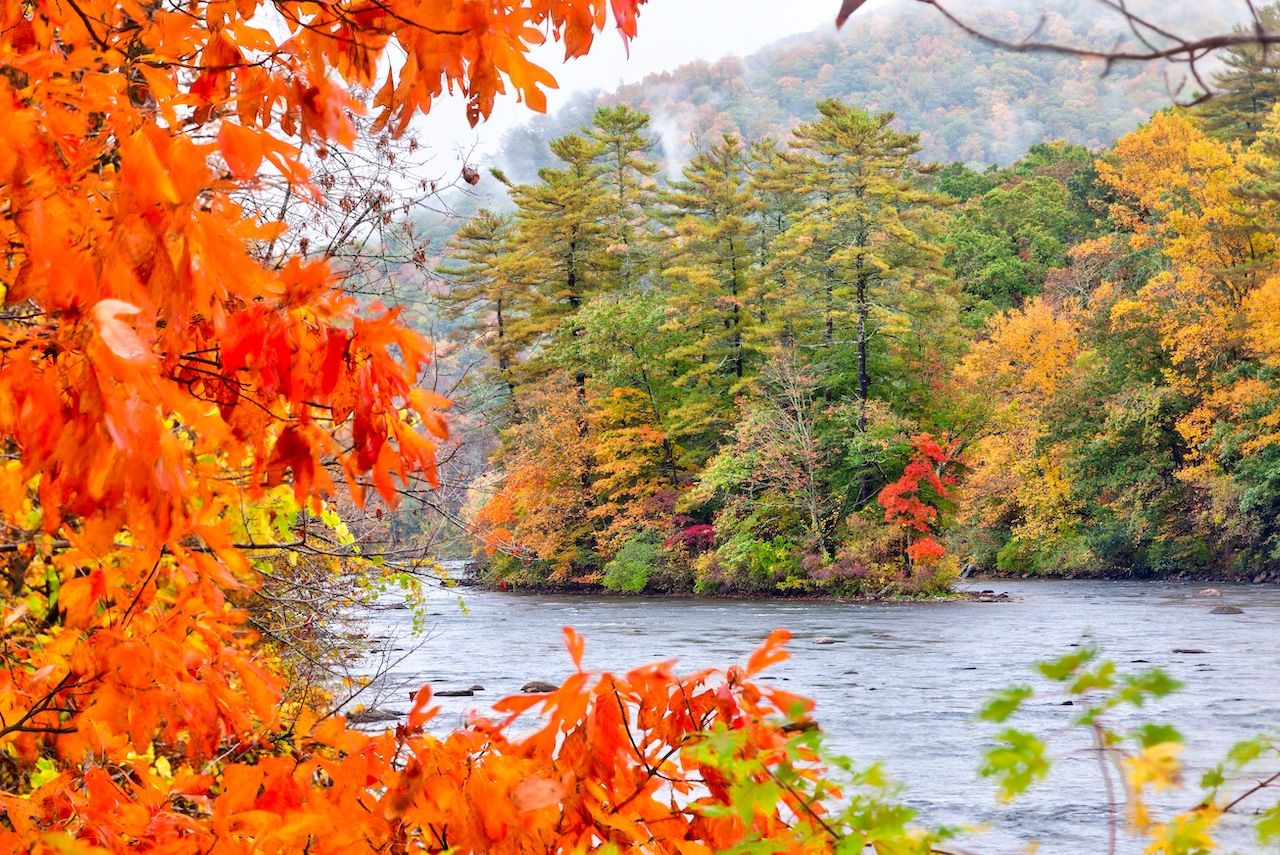 Of all the things to do in the Other Berkshires, the fall colors may be the most magical. Connecticut is one of the best states to see foliage in the entire US, and the Litchfield Hills region of the Berkshires is the first place you should head when in need of a long, colorful drive.

Typically, the colors start to pop around the first week of October each year; but you can time the show with Connecticut’s foliage tracker. Maples, maidenhairs (my personal favorite), and oak trees are a few of the top producers of magic in Connecticut’s Berkshires, though you can find other rarer types as well. If you time it right, you’re guaranteed to see orange, red and yellow leaves anywhere you go in the “Other” Berkshires.

That said, a good driving loop that foliage enthusiasts can follow is the roughly 100-mile-long Litchfield Hills Ramble. It begins in Torrington, Connecticut, and brings you through the towns/villages of Falls Village, Kent, Warren, New Preston, East Morris, and Litchfield. 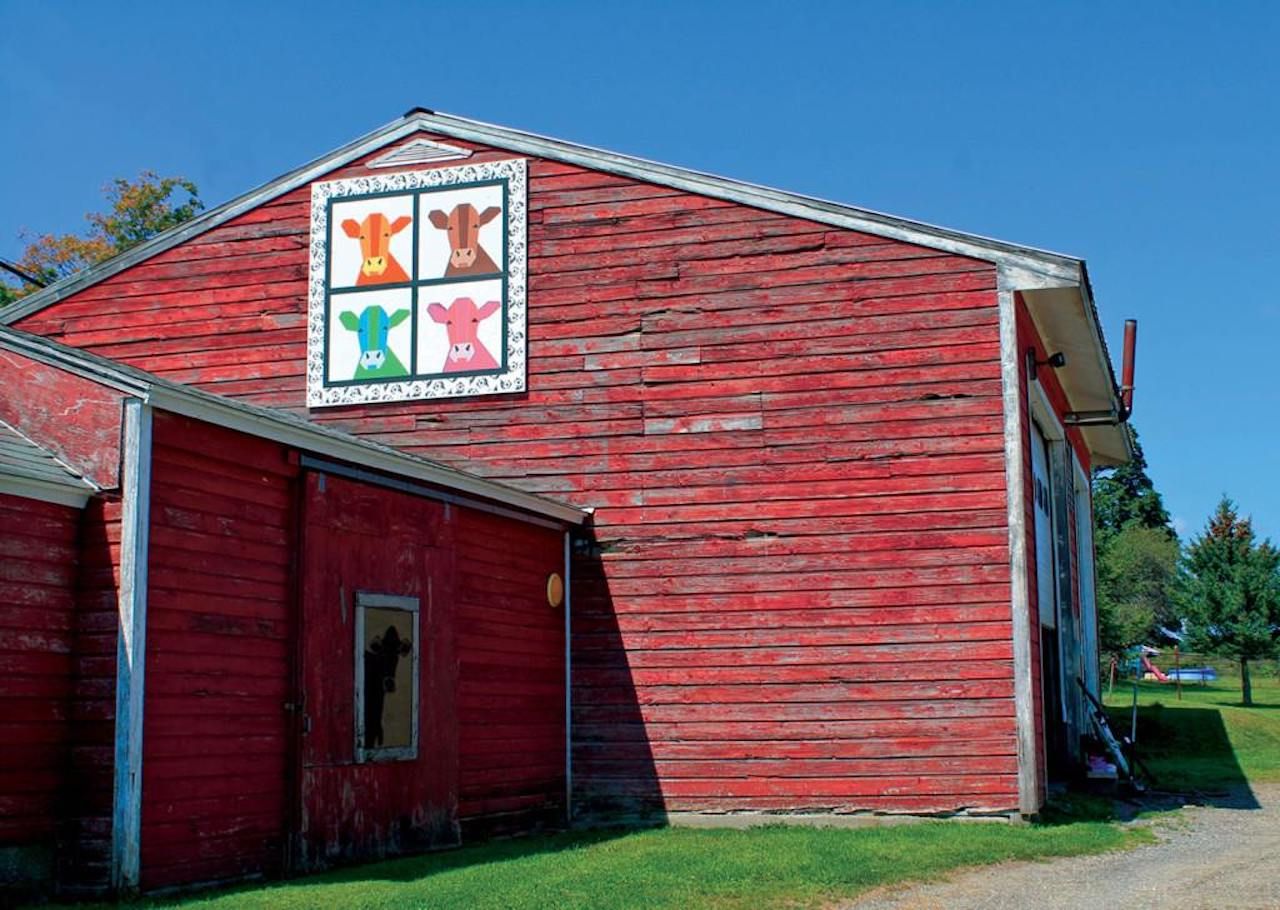 While New Milford may be slightly too far south to be considered a true part of the Connecticut Berkshires, it’s still in Litchfield County. Since you’ll likely drive through it on your trip, you should stop in for a unique cultural experience. The New Milford Quilt Trail, the first of its kind in the state, will take you on a drive past 19 different barns throughout New Milford — all with large quilts boasting colorful designs that you can see from the comfort of your car. Each of the quilt designs is special, with each square speaking to the history of its location. [

Stay in a gorgeous property in the heart of it all

With so much to do, you’ll want to stay a while to take it all in. These beautiful rentals make the perfect home base for your time in the “other” Berkshires. 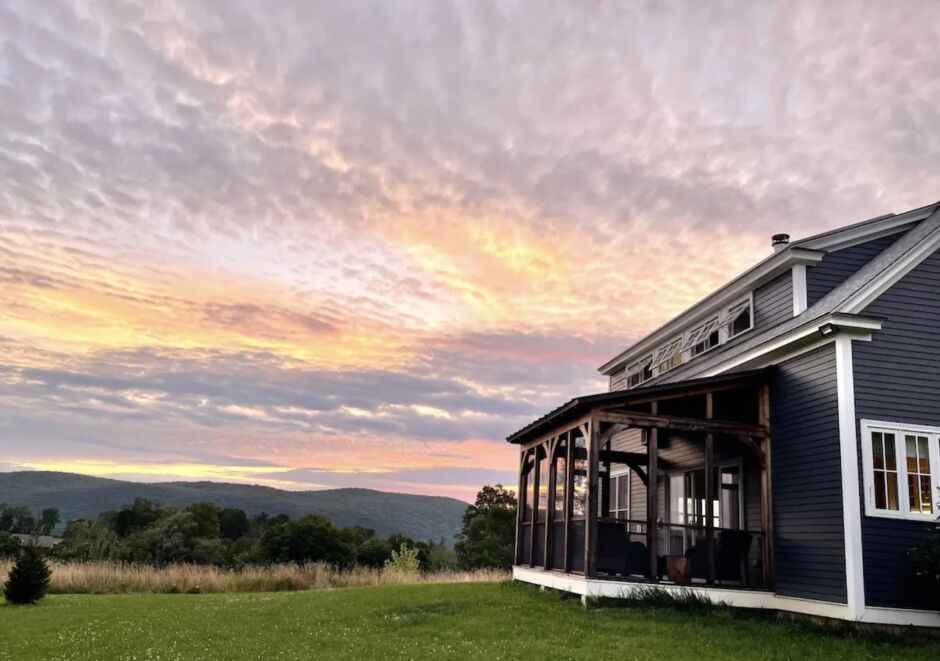 The host boasts of heated floors and high thread-count sheets, so no matter the time of year you visit you’re bound to be comfortable here. This property outside the town of Sharon is as iconically CT as it gets. Rural but beautiful, simple but clean. Oh, and the views stretch into the surrounding forest, a nice touch to wake up to.

Cottage in the woods 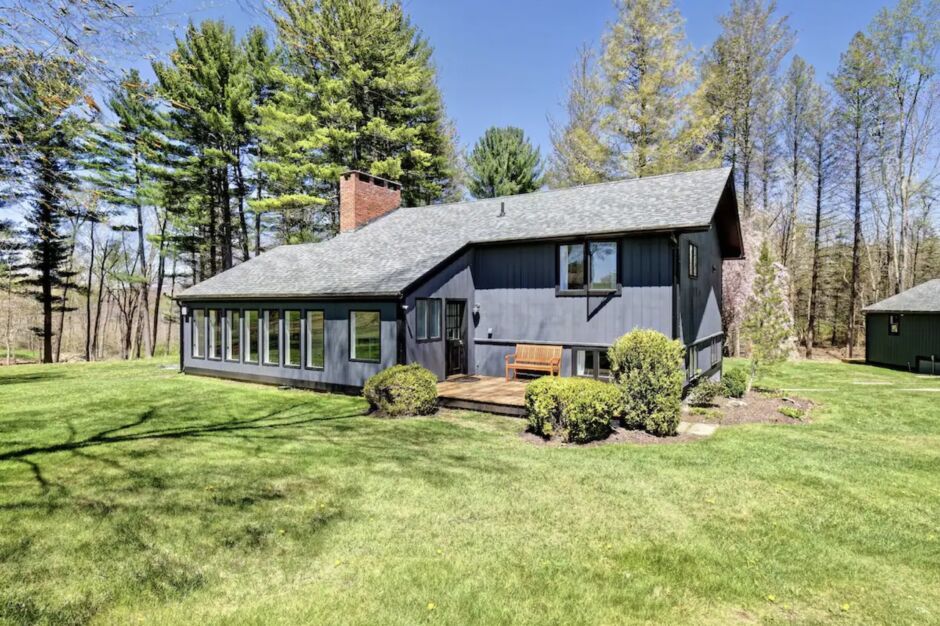 Just the name of this property calls to mind everything you come to the “other” Berkshires for. Remote but comfortable, this cottage in the woods outside Salisbury is more like a home and complete with a full kitchen and wraparound deck. If exploring the hills or embarking on hikes in the area, this is the spot for you.