What is Australian cuisine? It’s a question that seems to prompt quizzical looks and vague answers. Is it defined by fresh and raw ingredients that reflect the island’s abundant produce? Does it come down to barbecued seafood, like shrimp? Or should Australian cuisine be defined as Aboriginal bushfood?

Ross Dobson, an Australian chef and food stylist, wants to answer that question once and for all in his book Australia: The Cookbook. His 431-page tome covers the incredible breadth of what Australian cuisine is now. It includes recipes for “mixed grill” — lamb chops and sausage grilled and sometimes served for breakfast, beer-battered fish, vanilla and lemon “slices” (similar to a tray-bake), to “bugs,” a crustacean native to Australian waters that are cooked in a cast-iron skillet.

However, Dobson’s perhaps more interesting and complex goal is to unravel how, exactly, Australian cooking has evolved since before European colonists came to the island. The book starts with a powerful note, which reads: “We acknowledge the Traditional Custodians of the Land, across the many language and cultural groups within Australia’s diverse Aboriginal and Torres Strait Islander communities, and we pay our respects to Elders past, present and emerging.” He starts his story by acknowledging that First Australians sustainably sourced seafood on the land now known as Australia for as many as 12,000 years and were very likely to be the first occupants to establish agriculture and aquaculture systems in the region.

It’s also worth pointing out that, in a subsequent section of the book, Dobson invites indigenous food educator Jody Orcher to write about how to respect and honor Aboriginal bushfood ingredients (which includes items like river mint, emu, raspberries, finger limes, and kangaroo), and their contributions to Australian cuisine.

Ocher writes that when Australian chefs use “bushfood that Aboriginal people have been using for generations,” they should recognize “where [these ingredients] come from, as cultural knowledge, preparation and cooking methods come directly from the traditional owners of country who have been sustaining these plants through Aboriginal land management practices for generations.” She also insists that if you’re going to use bushfood ingredients in your cooking, recognize how Aboriginal people used them (publicly, if possible) and make your best attempt to “demonstrate respect by asking traditional owner groups for permission to share knowledge, language and culture.”

From there, Dobson chronicles the history of immigration and migration that shaped Australia: In the 1700s, the British arrived to establish a penal colony, which was the start of a cultural and culinary influence that has lasted the rest of the country’s life span. English settlers adapted local recipes to accommodate traditions from home. They replaced Christmas goose with lamb, for instance, and seasoned crawfish and possum with curry powder — a spice mixed popularized in Australia thanks to England’s colonization of India.

One reason that Australian cuisine might not have been able to extricate itself from the shadow of British influence is simply that recipes from abroad were widely popular in Australia. Dobson writes that by the 1800s, “a good cake recipe published in Geelong, Victoria, for example, would more than likely go on to appear in print in Hobart, Adelaide or Perth.” He likens an English recipe spreading through Australia to a modern-day viral video.

The mid-19th century saw the next great wave of migration to Australia’s shores. Approximately 600,000 Chinese people immigrated to Victoria to search for gold, setting what Dobson calls the “blueprint” for modern Chinatowns in Australia. Hybrid Chinese-Australian food is a staple in the country today that can be seen in recipes like combination soup — a mix of barbecue pork, prawns or shrimp, Chinese greens, and both egg noodles and wontons — and Peking duck pancakes.

For the rest of the country’s history continuing through today, every aspect of how Australian cuisine has developed has been marked by immigration. Greek immigrants introduced the Australian concept of the milk bar, where the iconic “hamburger with the lot” (a hamburger topped with a fried egg and beets) can be found. A wave of European immigrants introduced once skeptical Australians to ingredients like garlic, olive oil, and Parmesan cheese. According to Dobson, this prompted a craze for Italian food that Australians can still feel today in recipes like one for a marinara sauce that includes slipper lobsters and mussels.

However, the most significant impact on Australian cuisine might come from the nearly 80,000 Vietnamese refugees who arrived on the island following the Vietnam War. Dobson says that “Australians cannot get enough of the fresh and fragrant offerings of Vietnamese food.” And that pho, in particular, seems to have tapped into some deeply rooted desire in the Australian palate. It’s a national dish of Vietnam, but also arguably of Australia. Many Australians are drawn to the freshness and vegetable-forward dishes of Southeast Asian cuisine, embracing both Indonesian and Thai food.

This history of adaptation and hybridization creates a cuisine that’s difficult to pin down or define in simple terms. The country is inherently multicultural, and the food reflects the amalgamation of flavors and cuisines that the island has absorbed over the years. As Dobson puts it, Australian cuisine is “an eclectic combination of ingredients and cooking styles.”

One especially fundamental aspect of Australian cuisine is the ability of professional chefs and home cooks alike to rework a classic dish from another culture — a Thai green papaya salad served with barbecue fish, for example. It’s a cooking philosophy that amounts to “bit from here, a bit from there.”

These are the five dishes that define Australian cuisine, according to Dobson. 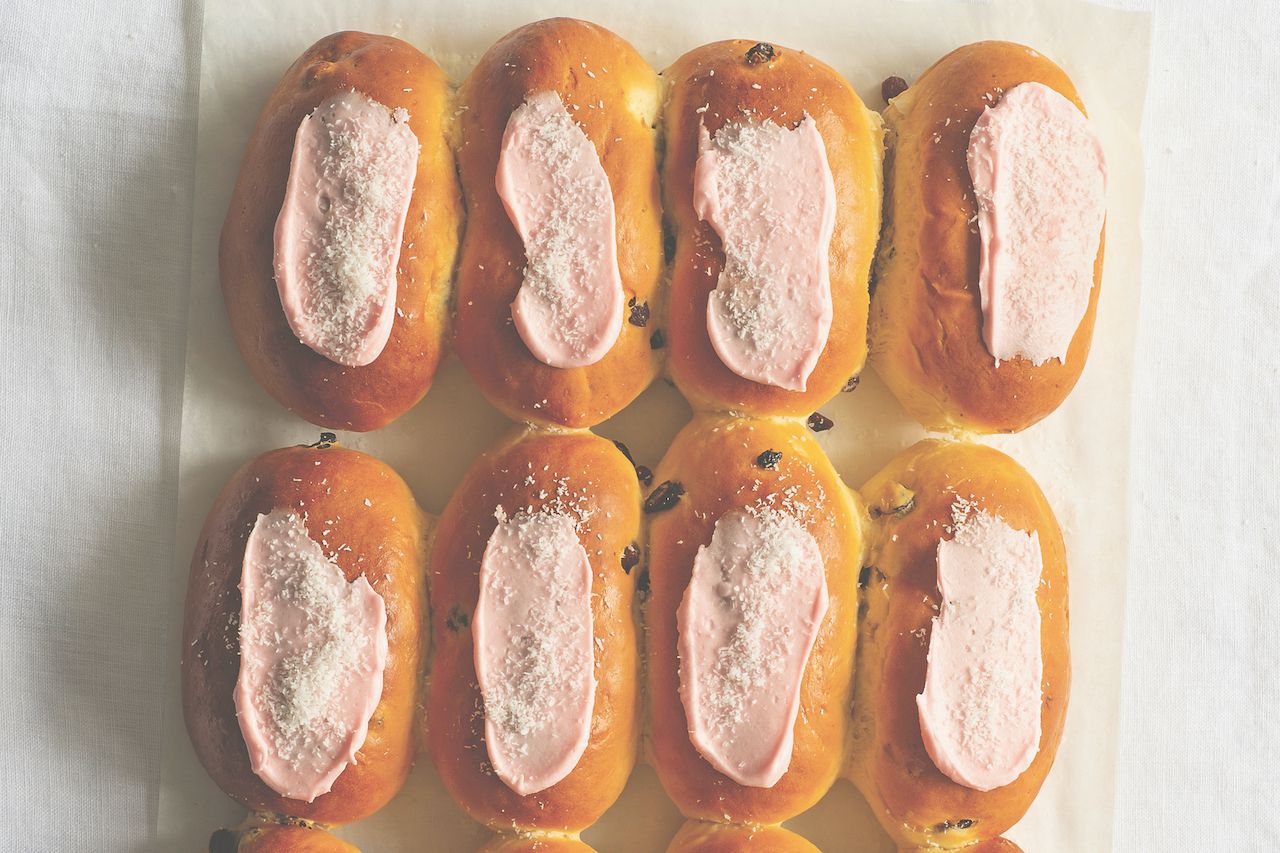 Australian finger buns are bite-sized pastries split open, “slathered in butter,” and topped with frosting for a touch of sweetness. They’re usually pink and sprinkled with coconut.

“These are the comeback kid of Australian baking,” Dobson says. “Popular in the 1970s and 80s, they are back in vogue with many artisan bakeries resurrecting them. They are gorgeous things to look at and melt in your mouth.” 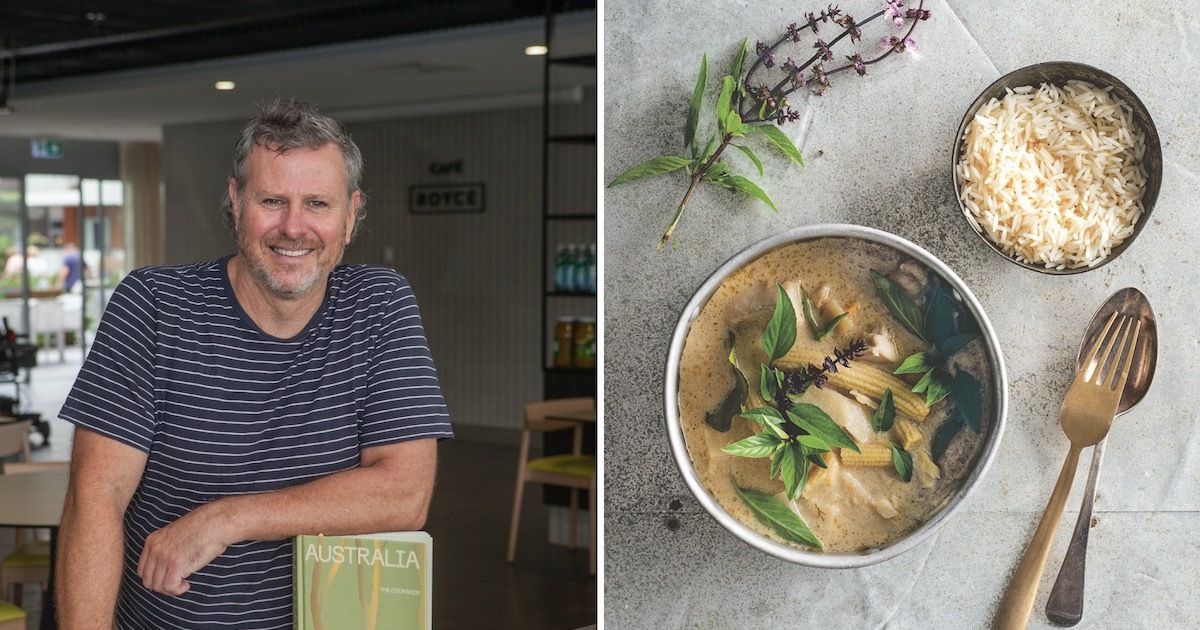 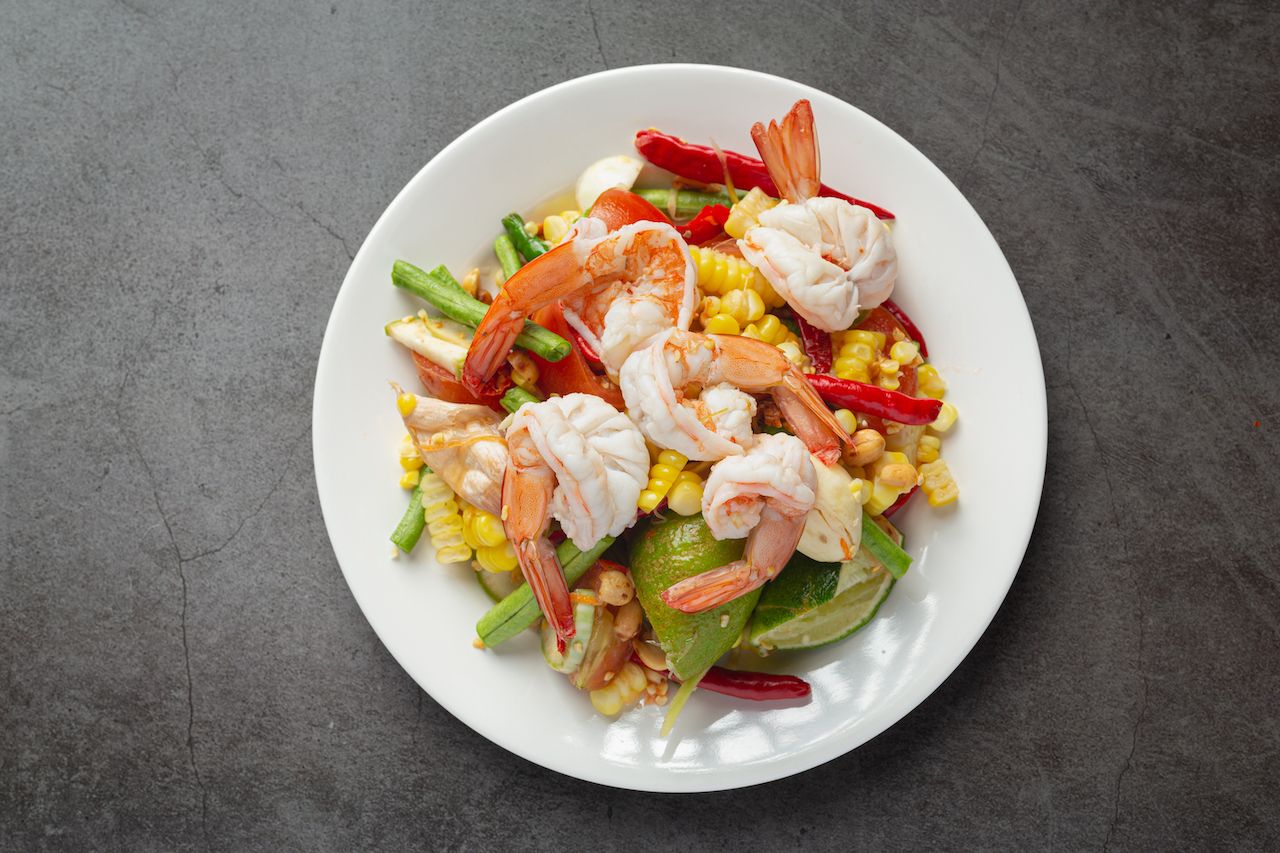 Australian people fell in love with Thai food in the 1980s. This prawn and papaya salad is full of freshness, with a tart kick from tamarind and lime juice and spice from bird’s eye chilies. In keeping with Australian seafood traditions, fresh produce is combined with prawns.

“This green papaya salad has a kick,” Dobson says. “There was a time when you would have been hard-pressed to find this dish in Thai restaurants. But as the average Aussie palate craves more authentic [Thai] dishes, this is creeping its way onto many suburban Thai restaurants.” 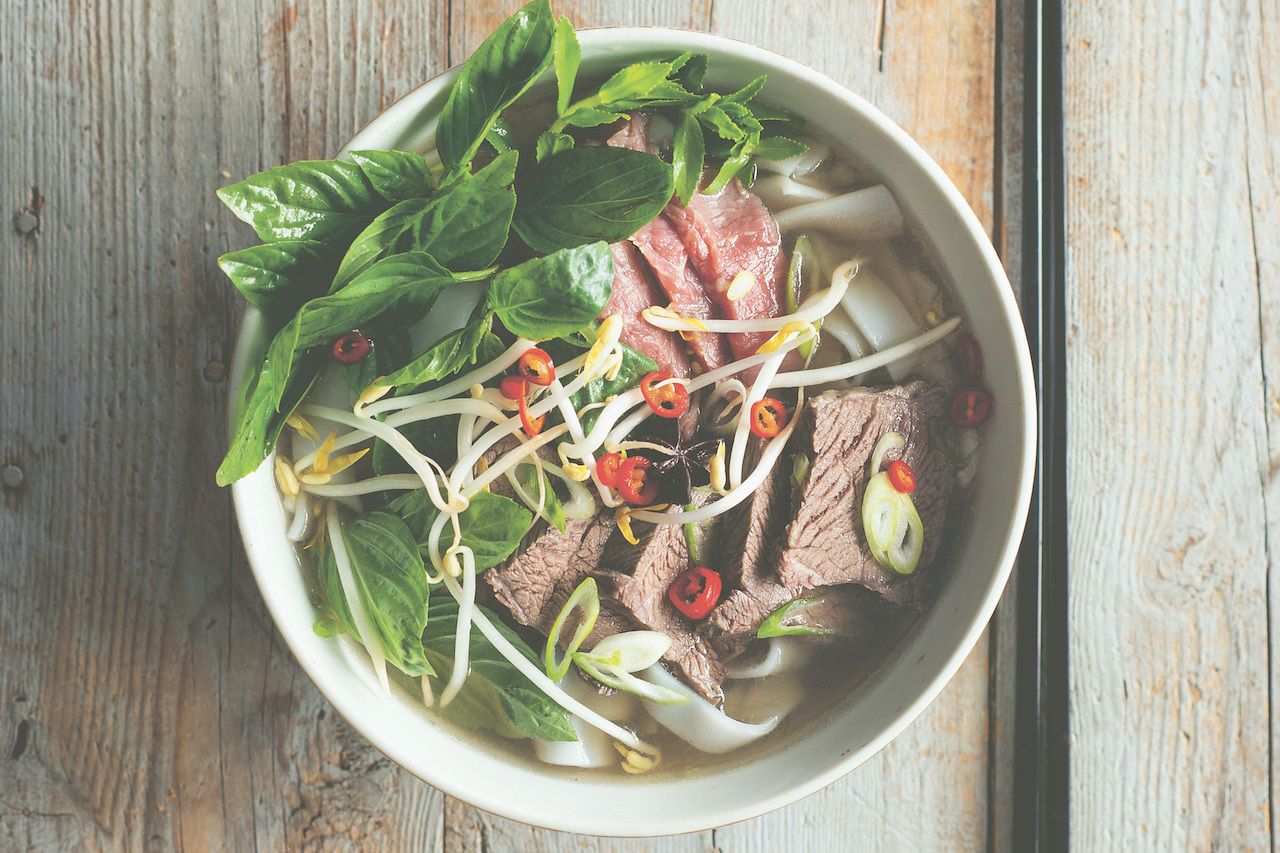 In the early 1970s, Vietnamese flavors caught fire in Australia. Today, pho is considered one of the most popular dishes in the country, especially in big cities like Sydney and Melbourne.

“Similar to som tum, this soup (probably the national soup of Vietnam) can now be enjoyed in many places in Australia, and is no longer limited to inner-city suburbs of Melbourne and Sydney,” Dobson says. “Australians have taken to Vietnamese food in a big way as we crave the freshness.” 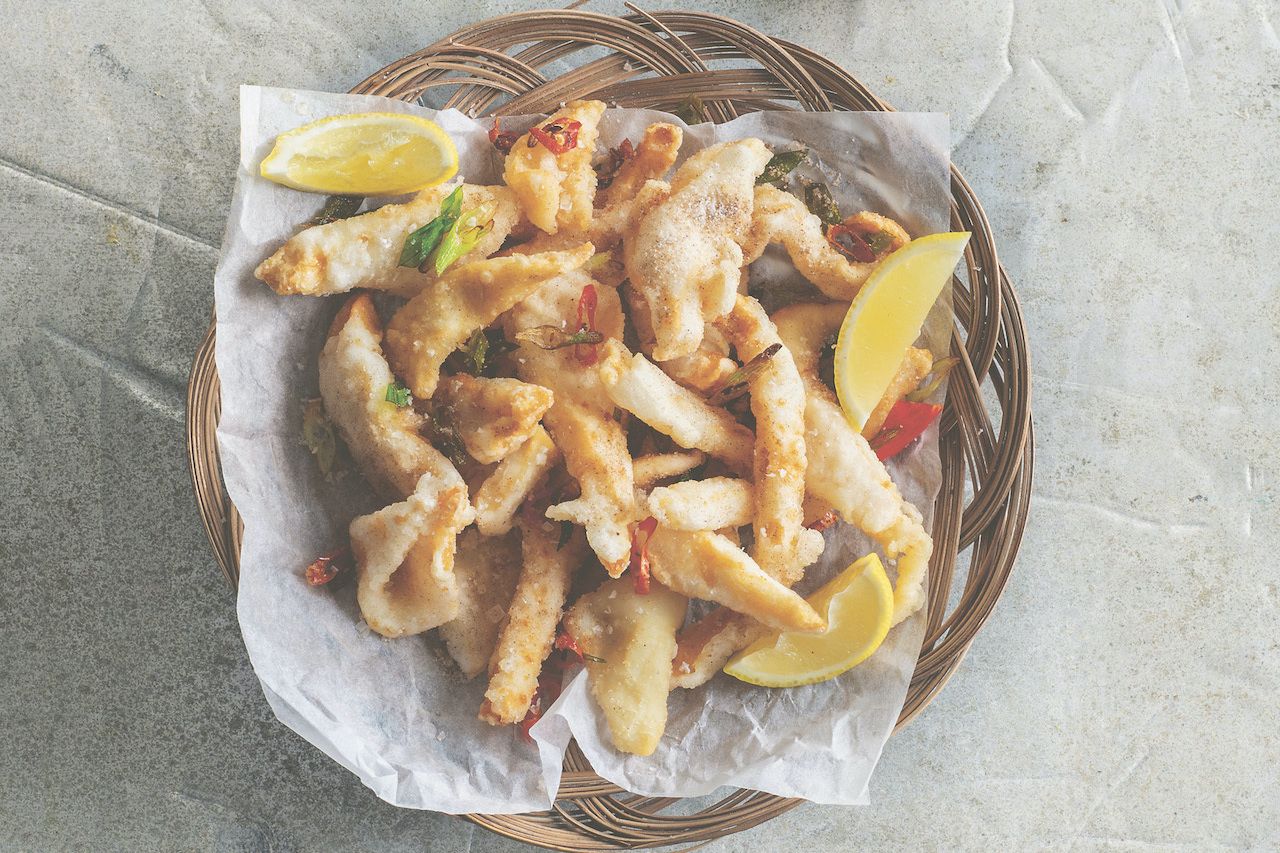 Dobson gives credit for this dish to the creation of hybrid dishes, which combines the Australian taste for seafood with Cantonese flavors.

“It would not be hyperbole to say that this one appears on almost every pub menu, right next to chicken parmi,” Dobson says. 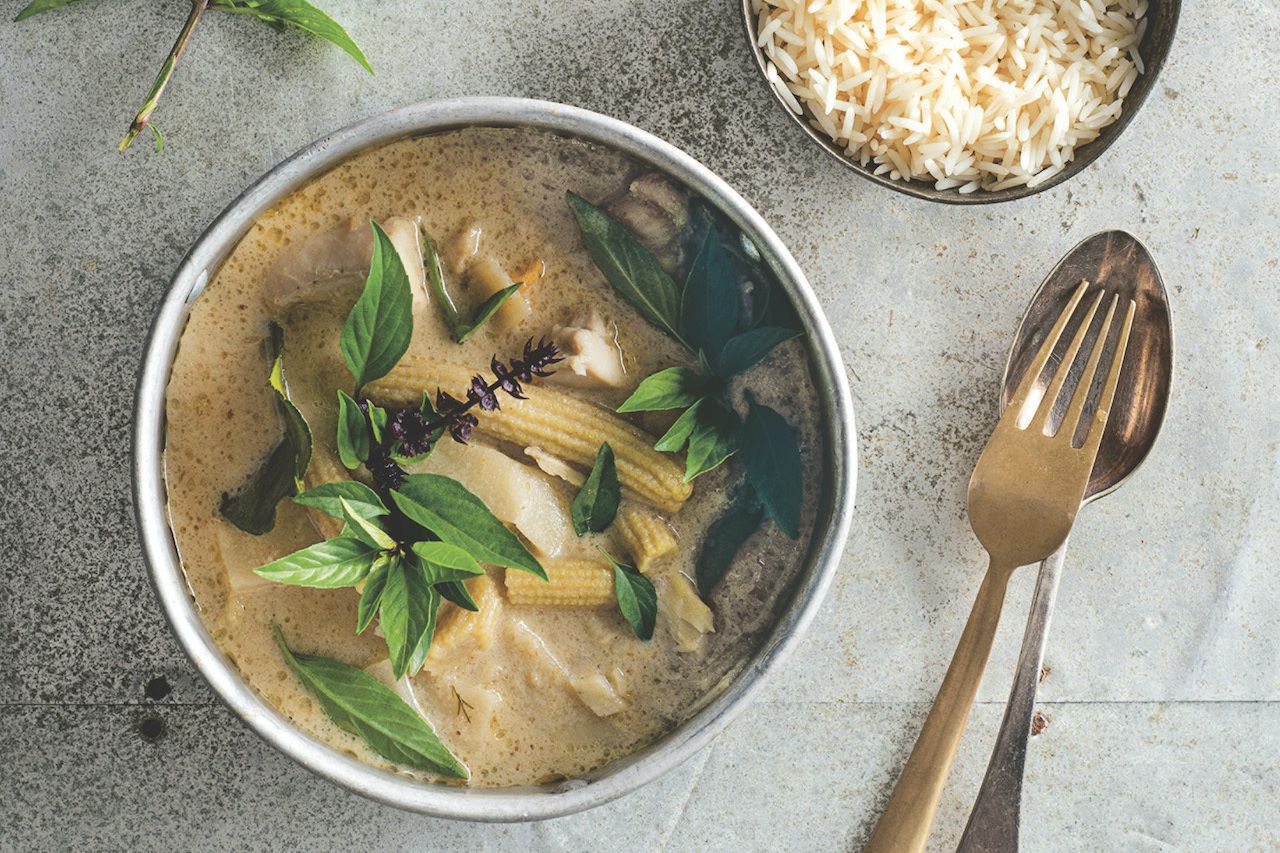 “I’ve eaten this in many other countries outside of Thailand,” Dobson says. “But Australian versions are as close to authentic as you can get. I guess it is because the fresh ingredients used in Thai recipes are grown in Australia. And this dish is unique in other ways. Thai green curry is one of the most popular dishes to order as a takeaway or home delivery, and it is one of the most searched for recipes on Australia’s top food sites for people to make at home.”

WineAustralia’s Prosecco Road is a little taste of Italy Down Under
Tagged
Food + Drink Australia
What did you think of this story?
Meh
Good
Awesome