If you’re an outdoorsy type, chances are you’re a dog person, and if you live in a mountain town, you know that dogs are as much a part of the outdoors culture as flannel and craft beer. But have you ever noticed that outdoorsy people seem to all have the same kinds of dogs? It’s logical, at least to a certain extent: Active, adventurous people are likely to get active, adventurous dogs. Still, most outdoorsy folks seem to gravitate toward the same handful of breeds — specifically huskies, labs, collies, heelers, and German shepherds — almost to the point of parody.

Obviously these prototypical adventure dog breeds have some advantages over the rest of the pack; they’re big, tough, energetic specimens that thrive on the rough-and-tumble lifestyles of their owners. But they’re not the only adventure dogs out there. If you’re in search of a four-legged friend to share in your active lifestyle, but you’re looking for something outside of the mainstream, consider one of these six seriously underrated dog breeds. 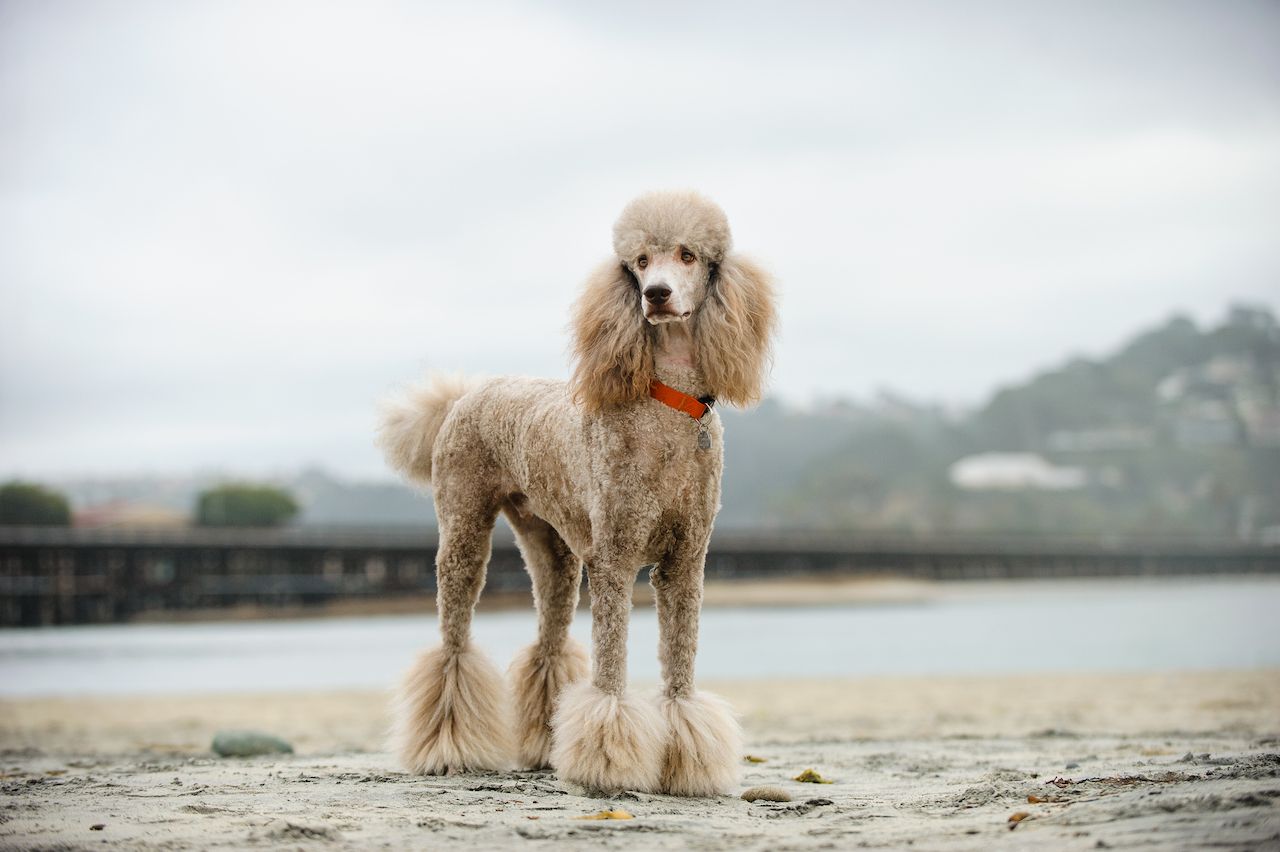 Don’t be fooled by the fluff. Poodles may not be the toughest-looking dogs around, but their prissy exterior belies a serious love for adventure. “Due to their majestic appearance, standard poodles are often stereotyped as fussy, high-maintenance dogs,” says Li-ran Bukovza, founder of PuppyTip. “In reality, this breed is happiest outside chasing squirrels and makes a great family pet.”

Originally bred as a duck-retrieving dog in Germany (their name derives from the German pudel, for “puddle”), the poodle’s extravagant coat was developed to insulate its body from cold water. And while their high stamina and superb swimming ability suit a life outdoors, their exuberant coats and exceptional trainability made them the darlings of European nobility, thus leading to the frivolous, even snobbish, image they suffer from today.

Regardless, Bukovza insists that adventurous owners shouldn’t be put off by the dog’s ritzy reputation. “Although they do need regular grooming, standard poodles aren’t afraid to get their paws dirty on an adventure!” 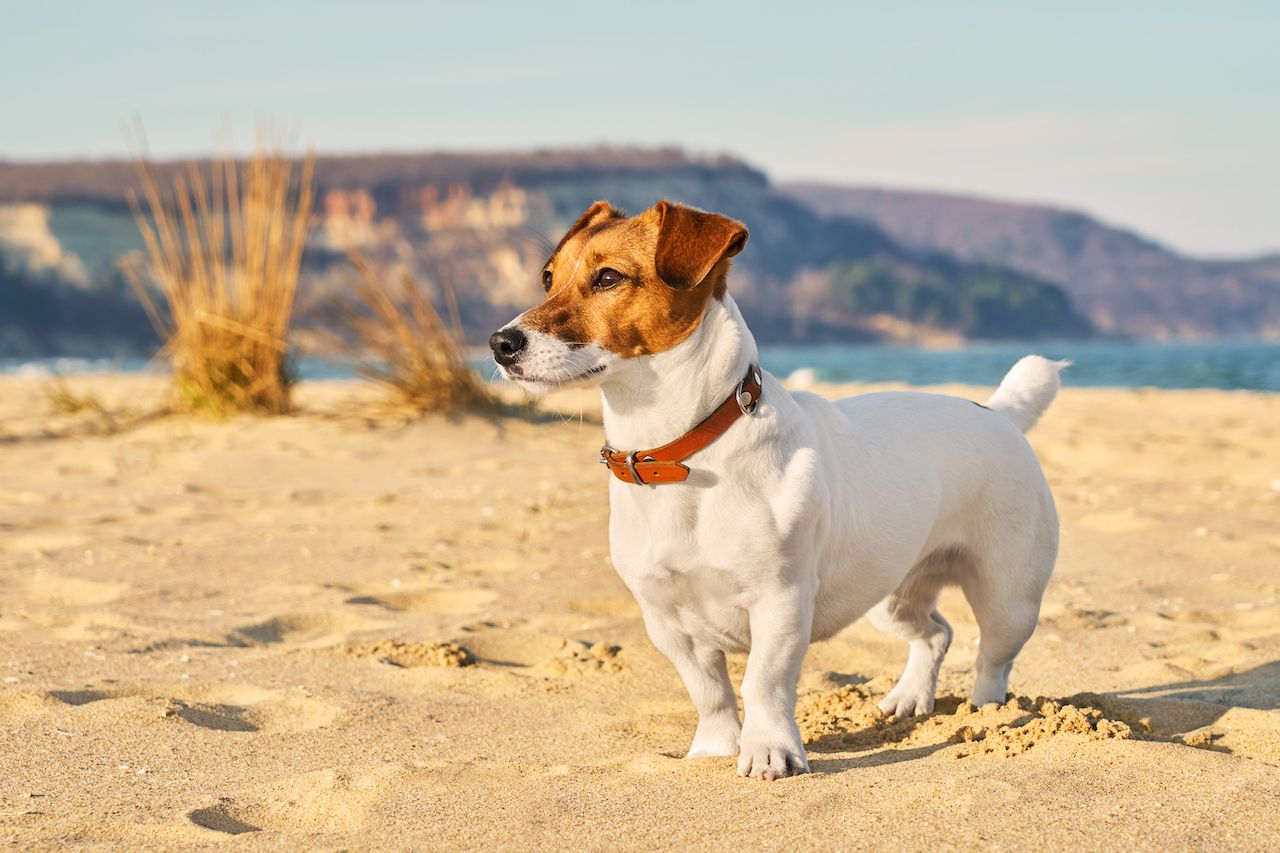 Averaging just 13-17 pounds fully grown, the Jack Russell terrier may not appear to be up for big adventures, but Bukovza says you shouldn’t be deterred from getting one. “While they may be small, you certainly won’t have to worry about a Jack Russell terrier keeping up with you!” Lisa Bernier of BARK, maker of the BarkBox, agrees. “These dogs are little, but boy do they have a ton of energy and grit.”

Also known as Parson Russell terriers, JRTs were bred as hunting dogs around 200 years ago in southern England. The breed’s creator, Reverend John “Jack” Russell, needed a dog quick enough to chase foxes above ground and tough enough to dig for them below. The result of his efforts was a bold, eager, and independent dog with boundless energy and a keen intelligence.

And while the JRT’s innate fox-hunting abilities may not be practical for the common adventurer’s life, there is still plenty of upside to the breed. “Jack Russells are fearless and tireless,” says Bernier. “They’re also small, so easy to travel with when it comes to flying in the cabin of a plane.” Bukovza agrees that their small size is ideal for more than just burrowing into fox dens. “They make a wonderful choice for someone who lives in a smaller space or wants a small breed, but still likes to run and play outside.” 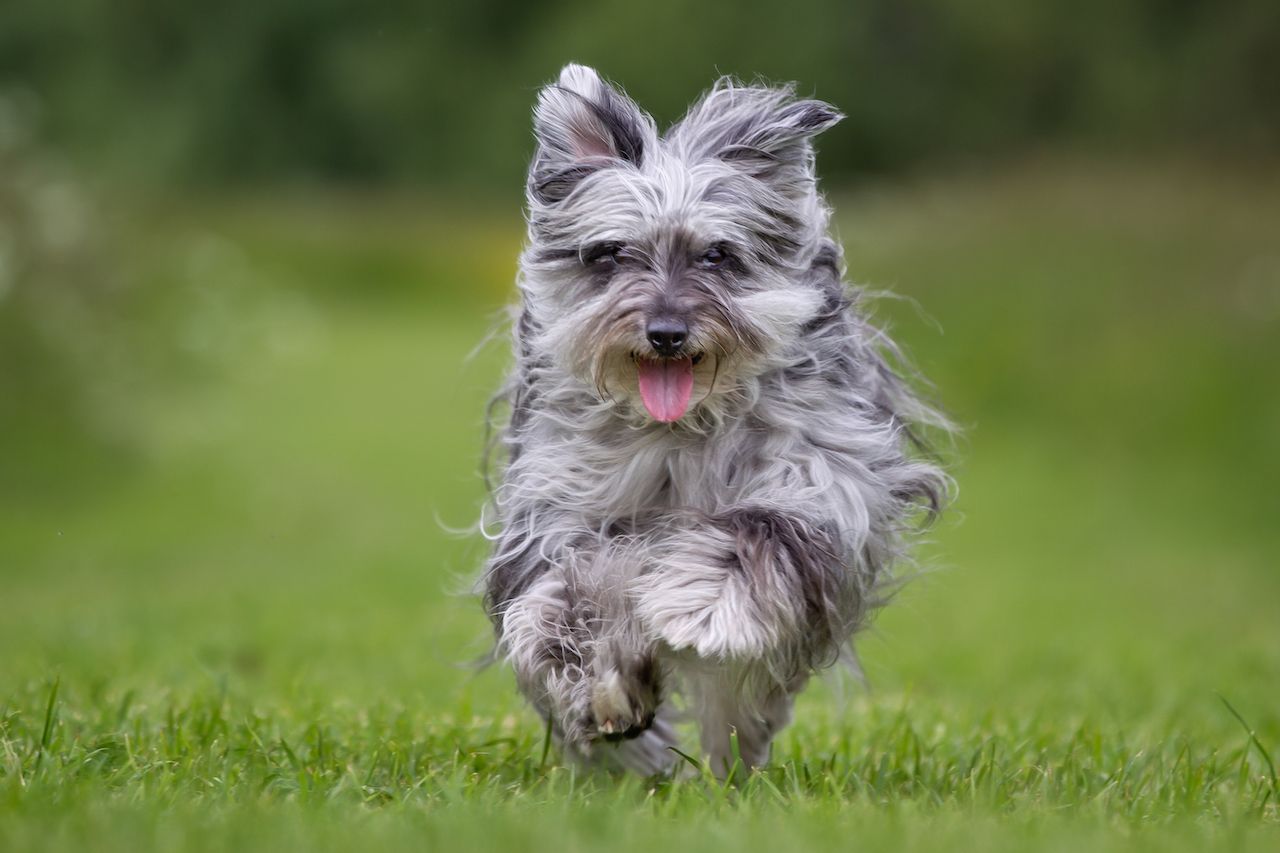 As a herding dog, the Pyr shep has boundless energy and enthusiasm, yet it’s fiercely loyal and unlikely to stray far from its owner’s side. “Whether you run, hike, camp, or track, these dogs will love to be by your side,” says Steffi Trot, owner and head dog trainer at SpiritDog Training in Albuquerque, New Mexico. “They are definite one-person dogs and bond strongly to their owner.”

Pyr sheps are an ideal match for anyone who stays on the go outside. “They are incredibly agile and active and will happily participate in any outdoor activity,” says Trott. “They have strong endurance and surprising climbing skills.” Best of all? Apart from their need for speed, Pyr sheps are pretty easy to take care of and can adapt to their surroundings. “Their coat is very low-maintenance and keeps them warm even in winter weather and snow,” says Trott. “You don’t have to brush or wash it a lot, which makes it perfect for adventures.” 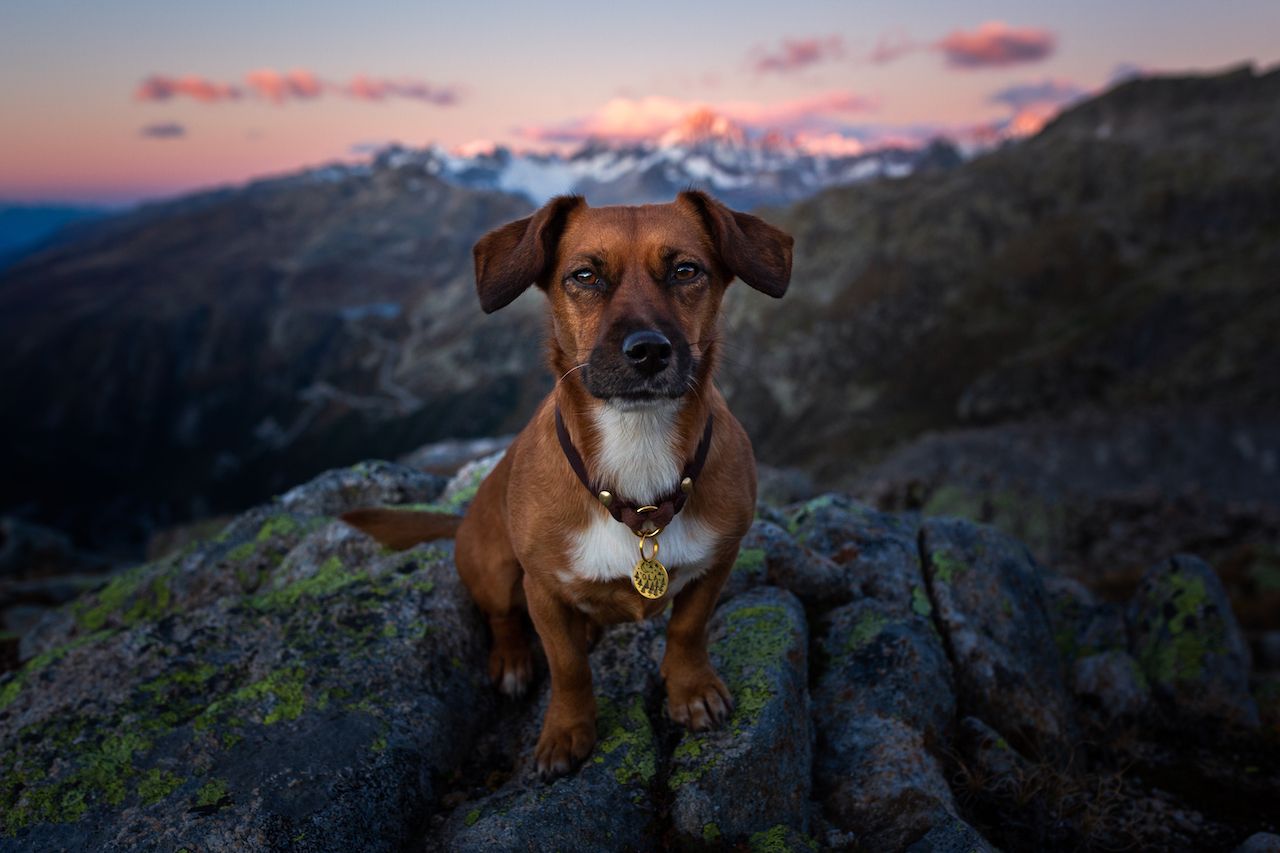 For most people, the dachshund ranks somewhere near the bottom of adventure dog breeds, right along with the chihuahua and bichon frise. But for Jessica Williams, the blogger behind You Did What With Your Wiener?, the dachshund is a bona fide adventurer. “I’ve been hiking, camping, and traveling with my two miniature dachshunds for over 15 years,” says Williams. “My dachshunds have hiked up to 11 miles a day, sometimes over steep terrain, and had energy left over at the end. I’ve also done several multi-day hikes with them covering 25-30 miles in three days. I am the one that has a hard time keeping up with them!”

According to Williams, the dachshund’s grit and perseverance are a product of its history. “They were bred for hunting badgers and rabbits in the woods, which required them to be tenacious, physically active, and sometimes to cover miles and miles a day in the woods with their handlers,” she says. “They are stubborn and driven and see challenges as something to solve and overcome. They are truly small dogs with big personalities and physical abilities.”

Through her blog and Instagram, Williams says she hopes to challenge people’s preconceptions of the breed and push back on the idea that small dogs can’t do big things. Her feed is a veritable travel log for dachshunds Gretel and Summit through their home state of Washington — here beside Jade Lake, there atop Beacon Rock. In the bio Williams insists, “Small dogs hike too!” and, “No, I don’t have to carry them.”

“Dachshunds may be small and have short legs, but they have just as much energy as a big dog,” says Williams. “During our most recent hike, we had to climb over boulders up a steep creek drainage and pick our own path. I know many people that would not attempt what my little dog did.” 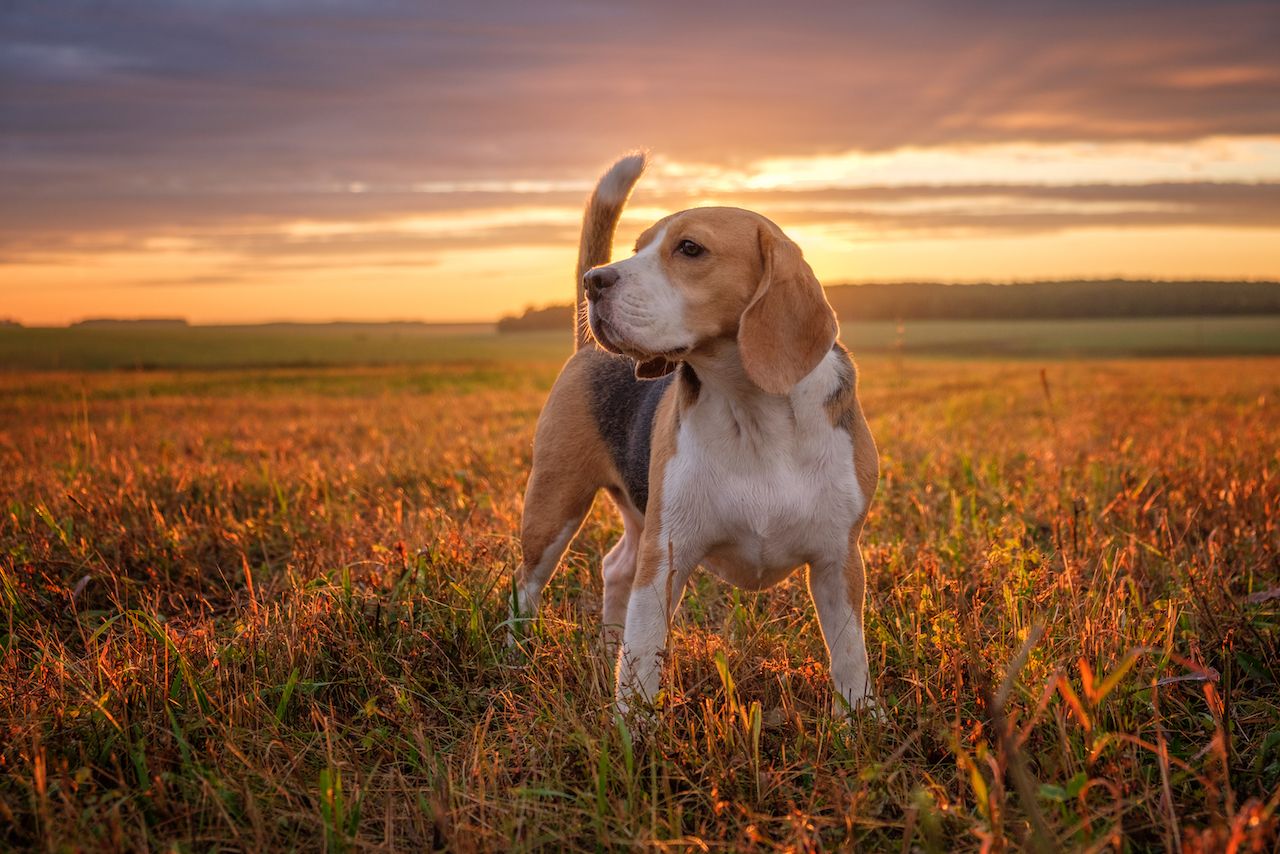 With their cute, floppy ears and their happy-go-lucky dispositions, beagles have long been popular family dogs. In pop culture, beagles like Snoopy and Shiloh have endeared many to the breed, and today, it has more of a reputation as a playful backyard pet than a purebred adventure dog.

While the beagle has been around for centuries, little is known about its origins. According to the American Kennel Club, even the name “beagle” is shrouded in mystery. Some say it comes from the Gaelic word baeg, meaning “little”. Others say it comes from the French term for the sound the dogs make: be’geule. One thing is certain: The beagle has always been a hunter, primarily tracking deer and hares. “Beagles were initially bred to hunt in packs,” says Dr. Jennifer Coates, DVM, of Pet Life Today. “That history gives the modern beagle lots of energy, as well as a very friendly and social demeanor.”

That means that beagles are well suited to a variety of activities apart from hunting, and they also make great travel companions. “As long as they are healthy and in good shape, they can go, go, go all day long,” says Dr. Coates. “A beagle’s small stature also makes them relatively easy to keep up with on foot when you’re out on an adventure together, and they tend to be easier to travel with and take care of than larger breeds of dogs.” 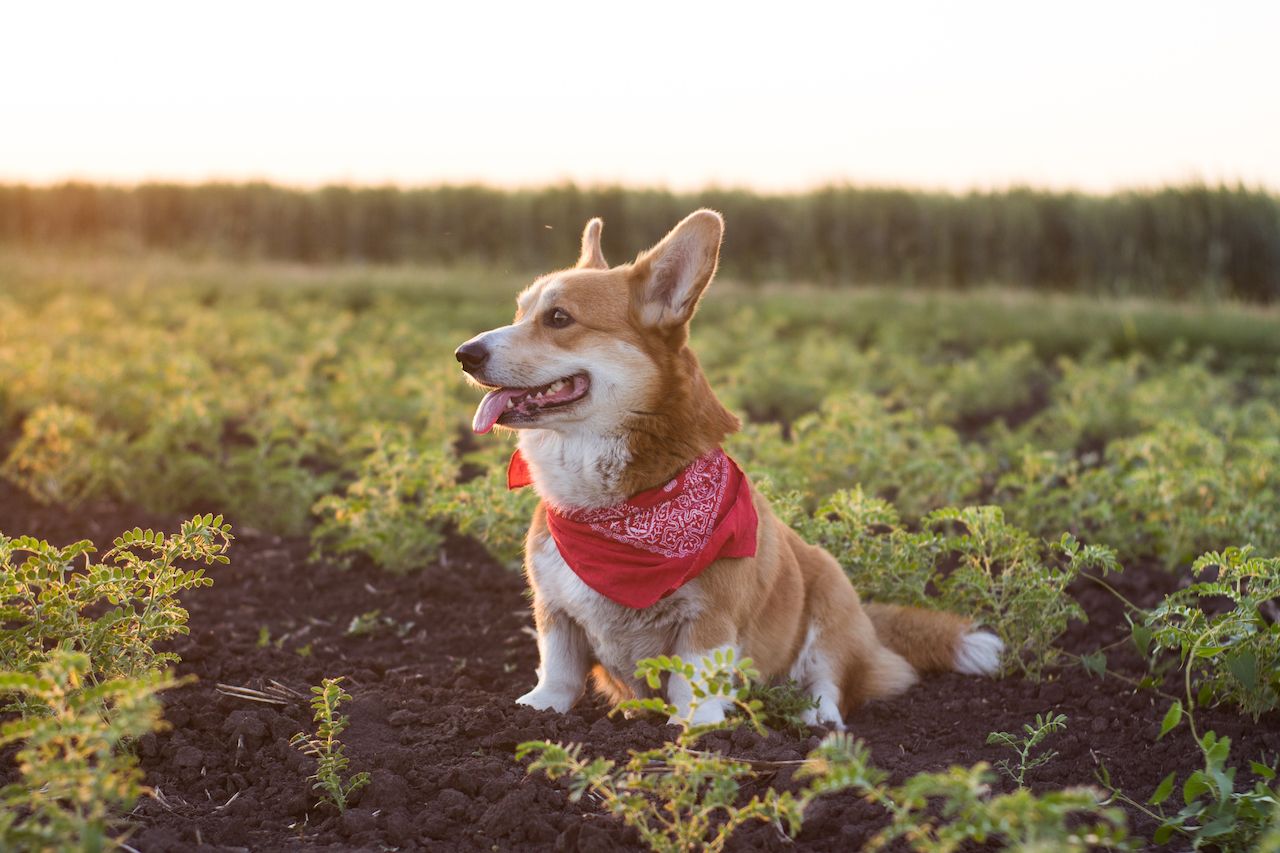 The corgi has enjoyed a royal reputation for years because of Queen Elizabeth II’s devotion to the breed both in real life and on the hit series The Crown, but corgis have all the makings of a true adventure dog.

Corgis originated in Wales and were traditionally used to herd or drive cattle in rural areas. “Corgis are highly intelligent working dogs,” says Adinna Mullins, owner and head trainer at Blue Ridge Dog Training in Asheville, North Carolina. “They’re consistently recognized as one of the smartest breeds around. They like to have a job to do and enjoy quality time with their human counterpart, so taking them on adventures with you is a no-brainer.”

According to Mullins, the senses they honed over centuries of herding serve them well while on an adventure. “Their ears and eyesight give them incredible alertness,” she says. “And, their excellent herding abilities mean they have a great sense of direction, and they always know where home is — a critical skill for backcountry treks.” And lest you think that their short stature could disadvantage them on an adventure, Mullins insists their appendages are a positive. “Their stubby legs and meaty paws are not only a desirable trait for herding but also give them a low center of gravity. This comes in handy for adventures that require balance like stand up paddleboarding.”

No matter what breed you go with, make sure you consult with a vet to ensure your dog is a good fit for your lifestyle. While certain breeds are definitely more suited for an active life, every dog is different and factors like age and health history ought to be considered before you set off on your next adventure. And before you set out on your adventure, make sure your dog is equipped with all of the necessary gear and precautions, including water and a first-aid kit.

PetsHow To Go Backpacking With a Dog, According To an Expert
Tagged
Outdoor Pets
What did you think of this story?
Meh
Good
Awesome