Nestled in the Great Smoky Mountains of East Tennessee, Dollywood is a timeless theme park that exudes charm. While it might be known for music, Dollywood food is just as notable.

Helmed by its dreamer-in-chief Dolly Parton — who grew up nearby — the park embraces its stunning location. Here, Southern hospitality is an attraction itself as you enjoy standout entertainment from talented musicians, including Parton’s family members. Great music is paired with world-class attractions, including globally recognized roller coasters. But you won’t get the full Dollywood experience unless you also try the park’s standout cuisine: Dollywood food includes legendary dishes like the pull apart cinnamon bread and pulled pork sandwich.

Once a regional destination, the theme park has since grown to attract guests from all over the world – and the Southern comfort food offered at the park is one reason why. The park’s incredible culinary offerings highlight mountain culture and the Southern way of life. Dollywood food is a glimpse into the area’s rich cultural contributions — and there are even some recipes from Dolly’s personal kitchen. From award-winning barbecue to unexpected sweet delights, Dollywood trades the theme park standards of hamburgers and hot dogs for more inspired options.

As an avid theme park goer for over three decades, I can say with authority that Dollywood shines with some of the best food at any park in the country. In addition to eats served all season long, the culinary team has upped the ante in recent years with food festivals and specialty wine dinners at the neighboring resort. You’ll come for the roller coasters and concerts, but stay for the food. 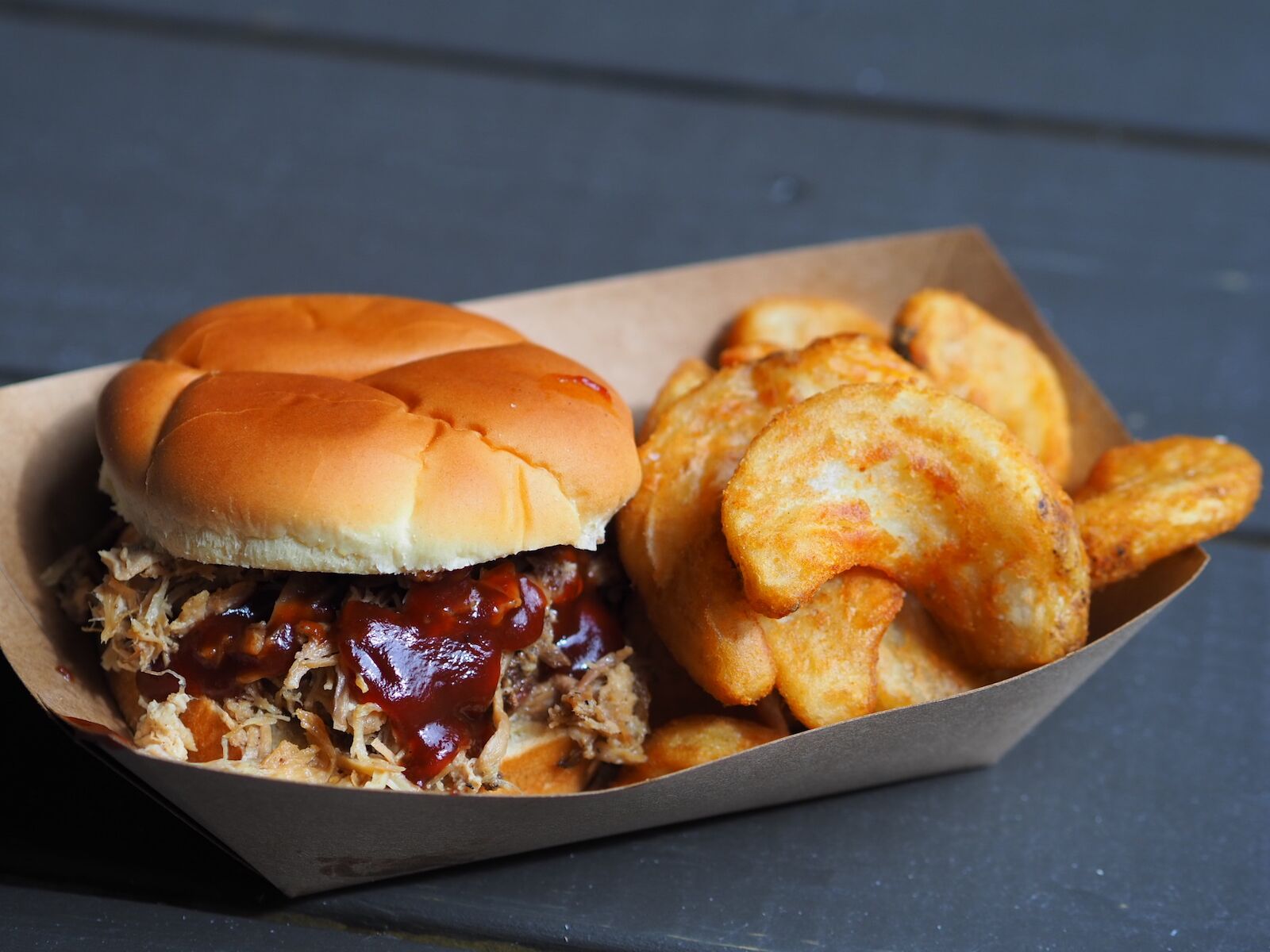 Dollywood’s most famous dish, the award-winning pulled pork sandwich, is a rite of passage for any visitor. Served from Hickory House BBQ, an unassuming counter service location, the sandwich is piled high with incredibly tender and flavorful BBQ pork. Smoked in-house, it’s gently doused with just the right amount of sweet and tangy barbecue that compliments the meat. Whether enjoying it for your first time (or hundredth) it is a shining example of Dollywood’s ability to flex its culinary muscles.

Where to find it: Hickory House BBQ

A recipe direct from Dolly’s life, stone soup is a rich combination of tomatoes, okra, potatoes, onions, and salt pork. The recipe was created by Parton’s mother and a favorite of Dolly and her 11 siblings when growing up nearby. With an earthy taste, it’s a hearty soup with origins that can be traced back centuries. The gluten-free dish is served during dinner service at Song & Hearth at Dollywood’s DreamMore Resort.

Where to find it: Song & Hearth at Dollywood’s DreamMore Resort 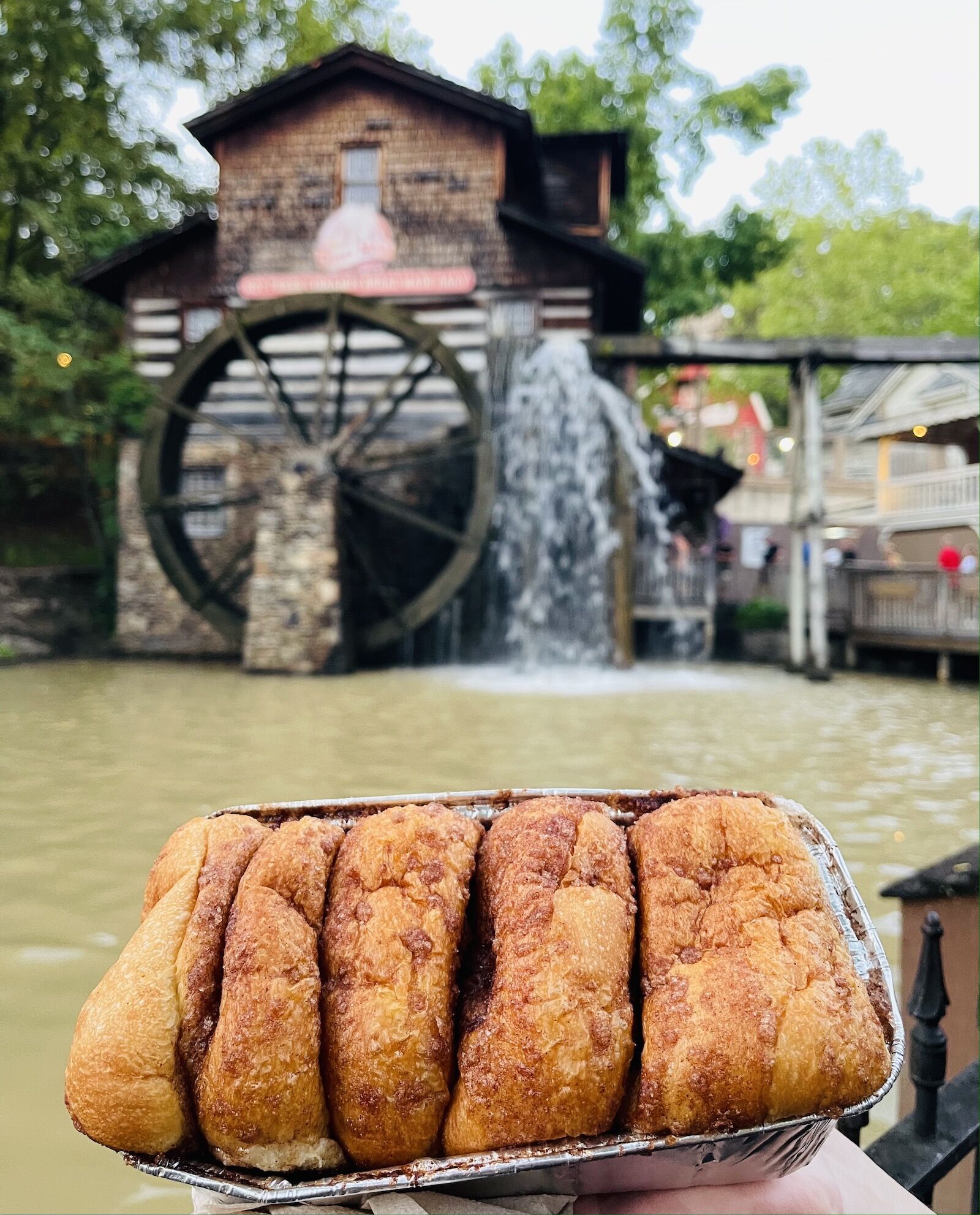 I can confidently attest that Dollywood’s other most sought-after item is worth the hype. The park’s famous cinnamon bread is a tantalizing combination of margarine and cinnamon that’s baked to golden perfection for 28 minutes in a customized oven. Served in a loaf that’s pull-apart style, it’s pillowy soft with each bite.

The Grist Mill exclusively serves the cinnamon bread (though you can find it at a couple other spots around the park); the bakers ferociously prepare up to 1,700 loaves a day for the crowds that gather outside the bakery. I highly recommend dipping the bread in apple butter and icing, too.

For a glimpse into life for Dolly growing up, Granny Ogle’s Ham ‘n’ Beans offers up Dolly’s Banana Pudding, a recipe created by her mother. The delicious combination of scratch-made vanilla pudding, banana slices, and vanilla wafers is made even sweeter by its story. Dolly has shared that money was tight for the family and a local store would tip the Parton parents off when bananas were nearing spoiled and offered at a discounted price. It’s creamy and rich, but remarkably light. 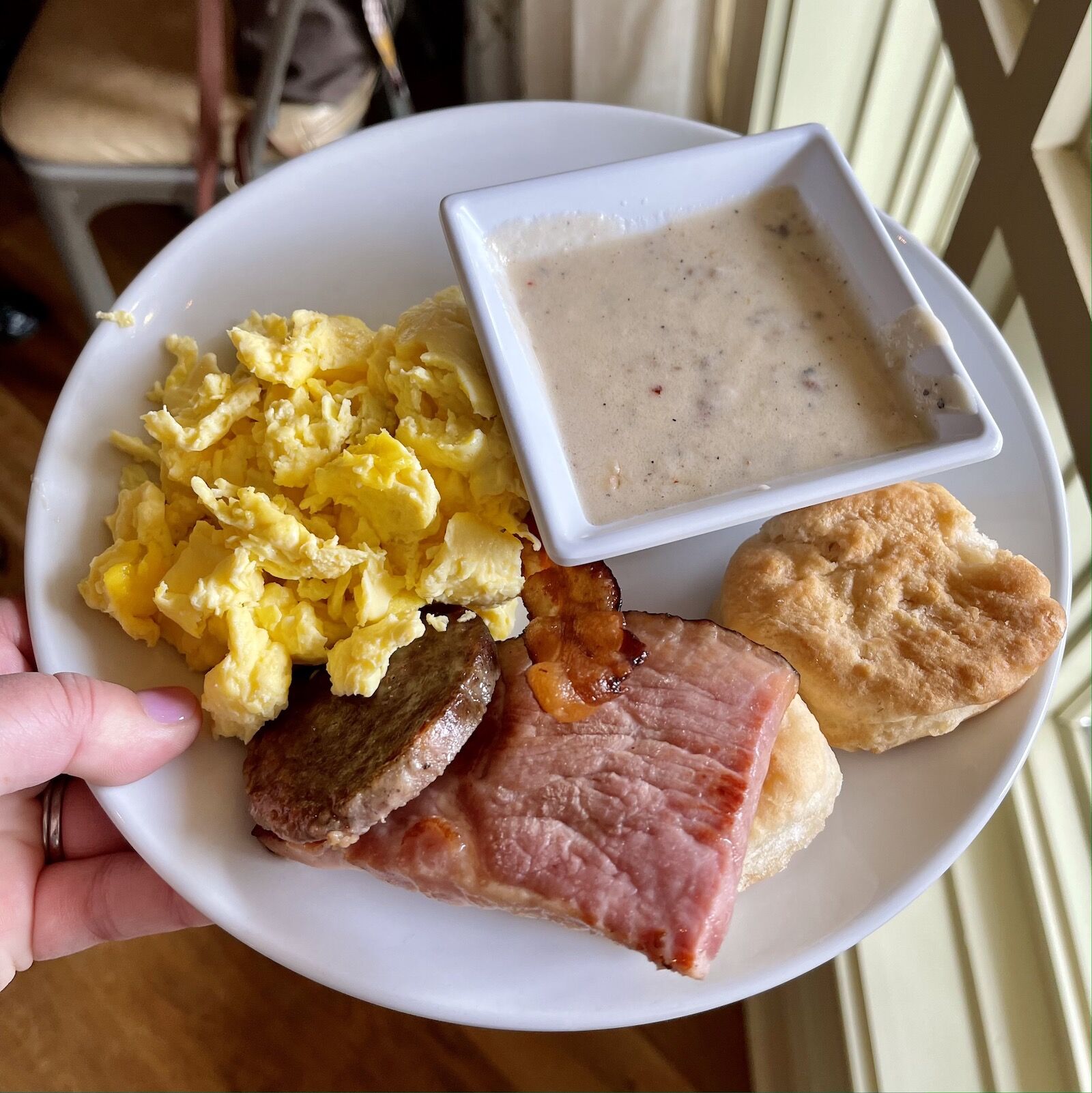 Located just next door to Dollywood, the DreamMore Resort is the property’s flagship, full-service hotel. Its signature restaurant, Song & Hearth, is dishing out traditional Southern eats, including the Southern-style breakfast buffet, open to both hotel guests and the public. As you fuel up for a park day, you can enjoy breakfast specialties like prime rib beef hash, stone-ground grits, and salty country ham. The sausage gravy and biscuits are a must-have on your plate as this beloved Southern staple is executed to perfection here.

Where to find it: Song & Hearth at Dollywood’s DreamMore Resort

An unexpected theme park find, Granny Ogle’s Ham ‘n’ Beans welcomes guests onto its porch for a traditional Southern meal. Granny Ogle’s signature pinto beans, or as they are more commonly called in the South, soup beans, are paired with savory pulled pit ham, and bright turnip greens. This dish hits all the right notes of salty and savory — and was a favorite of Dolly’s when she was growing up. 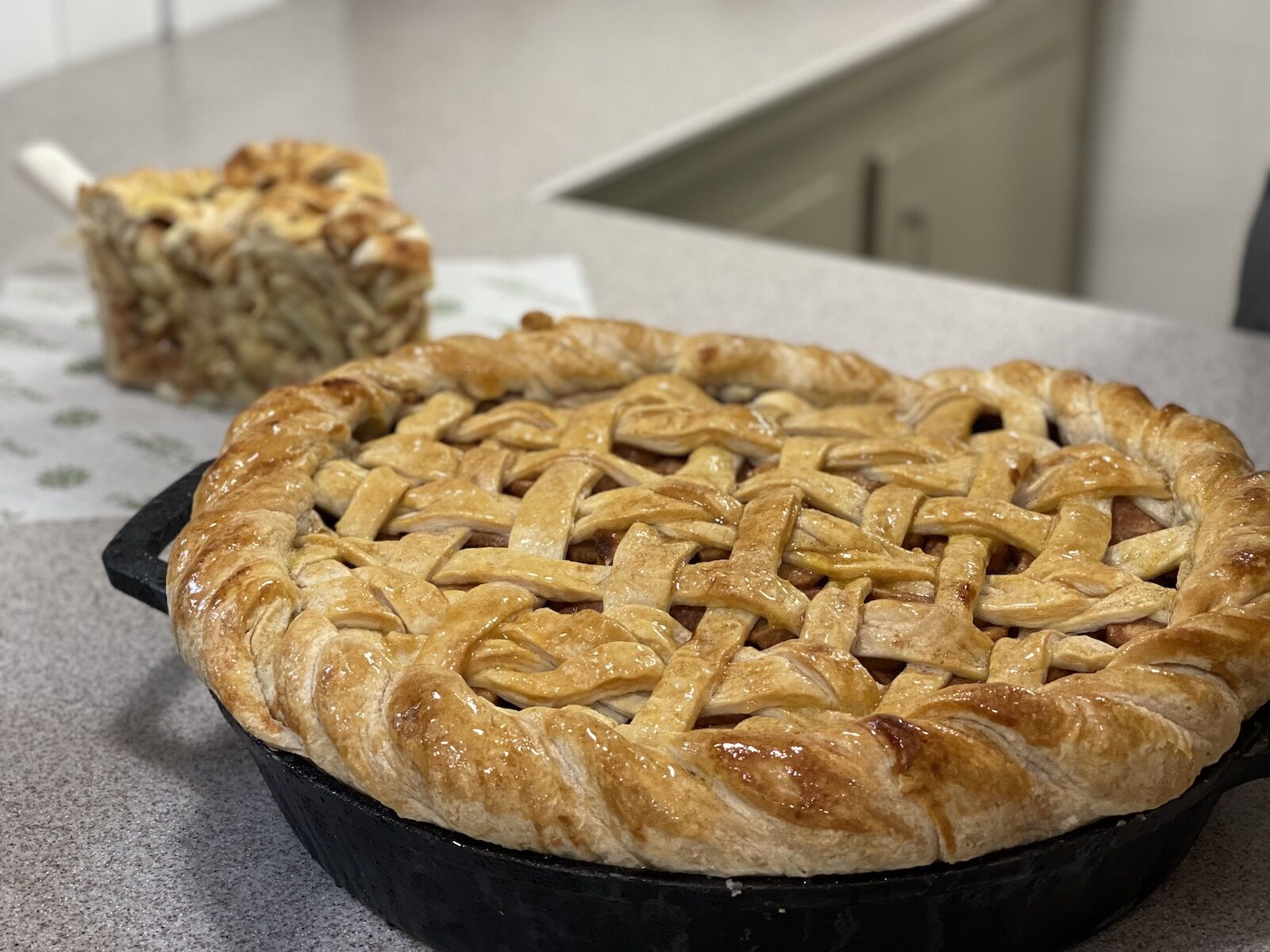 The scent of baked goods flows through the air at Dollywood’s entrance beckoning hungry guests inside the Spotlight Bakery. With delicious treats, including freshly prepared cookies and cinnamon rolls, it’s the 25-pound apple that piques the interest of many. Staggering in size, each pie is made with around 20 pounds of apples. Cooked in a giant cast iron skillet, the result is buttery and sweet. Dollywood shares that they sell on average several dozen of the full-size versions a year, but individual slices are available every day and serve up to four people.

Where to find it: Spotlight Bakery

The meatloaf stacker is Southern comfort food at its best. Served at Granny Ogle’s Ham ‘n’ Beans, this Dollywood signature dish is decadent. A slice of buttercrust white bread is loaded with mashed potatoes and a piece of homemade tomato glazed meatloaf. It’s topped with even more mashed potatoes and drizzled with savory brown gravy. 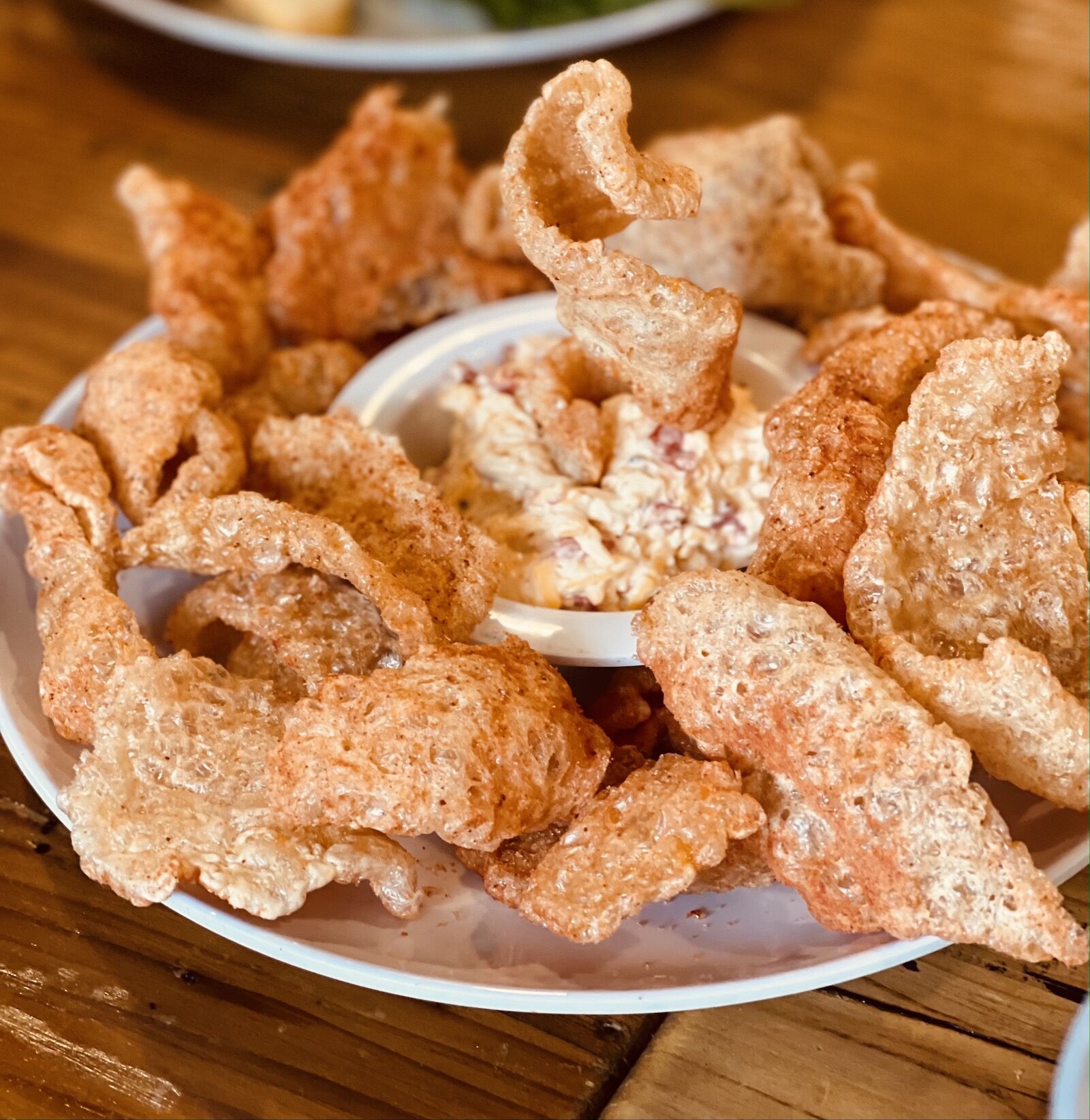 Dollywood doesn’t just serve excellent pork rinds but makes them right before your eyes. The snack is prepared using fresh pork rinds that are deep fried to a golden hue. Captivated onlookers can hear the pig skins sizzle and pop as batch after fresh batch is prepared within minutes at an open-air stand. Delicious as is, they also come tossed in BBQ seasoning adding a bit of smoky sweetness to the mix. 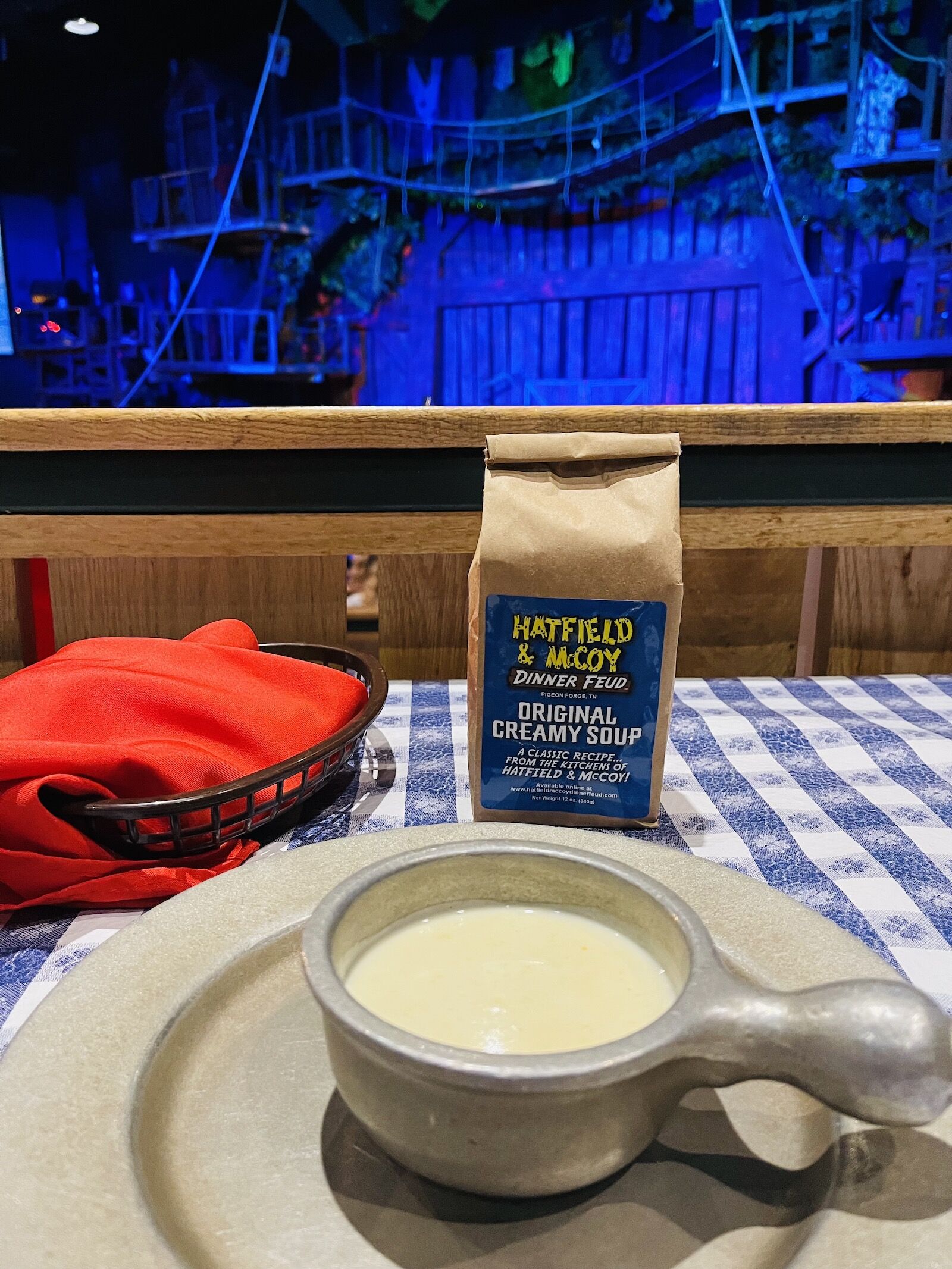 When the sun sets on Dollywood, the fun continues at several Dollywood-owned dinner shows. A dying breed across the country, these immersive experiences where food meets performance are alive and well in the Smoky Mountains. Hatfield & McCoy’s Dinner Feud is a homestyle feast where crispy fried chicken is served alongside an entertaining performance, but the must-have here is their Southern-style creamy soup. It’s a simple soup with a bold, peppery taste, but it’s become so popular that locations throughout Dollywood now sell an at-home mix so you can take it home.

Where to find it: Hatfield & McCoy’s Dinner Feud