Southern California’s Knott’s Berry Farm is a theme park with a story as fanciful as the attractions inside. Knott’s Berry Farm has been running for over 100 years, but the park began as a roadside berry stand and fried chicken restaurant — long before Walt Disney ever planted his roots just up the road. The early dining operations proved to be so popular that the amusements side was first built solely to entertain hungry vacationers and their families; in fact Knott’s Berry Farm food is one of the main reasons people go there in the first place.

Although Knott’s Berry Farm has grown and expanded to now include some of the more common amusement park attractions, like roller coasters, its culinary origins are still very much at the heart of what helps it endure as a beloved family-friendly destination. The boysenberry, a hybrid fruit first successfully cultivated by the Knott family, appears in all kinds of snacks and beverages, from barbecue wings to craft cocktails.

As an avid park goer for over three decades, I can say with certainty that Knott’s Berry Farm stands out as one of the best in the United States. Knott’s Berry Farm food can easily be ranked among the best theme park food in the country, too. The park itself is a perfect marriage of the past and present, honoring its roots while providing top-notch entertainment and cutting-edge roller coasters.

What prospective visitors might not realize though, is that they should take a tour not just of the coasters but of Knott’s Berry Farm food offerings, too. The food and beverage program, including an award-winning boysenberry food festival, remains one of the top reasons I continue to visit the park again and again. From surprisingly good fried chicken to tangy boysenberry pie (both using the original recipe Mrs. Knott developed), dining here is as thrilling as the park’s many rides. Here is the best Knott’s Berry Farm food you need to try on your next trip. 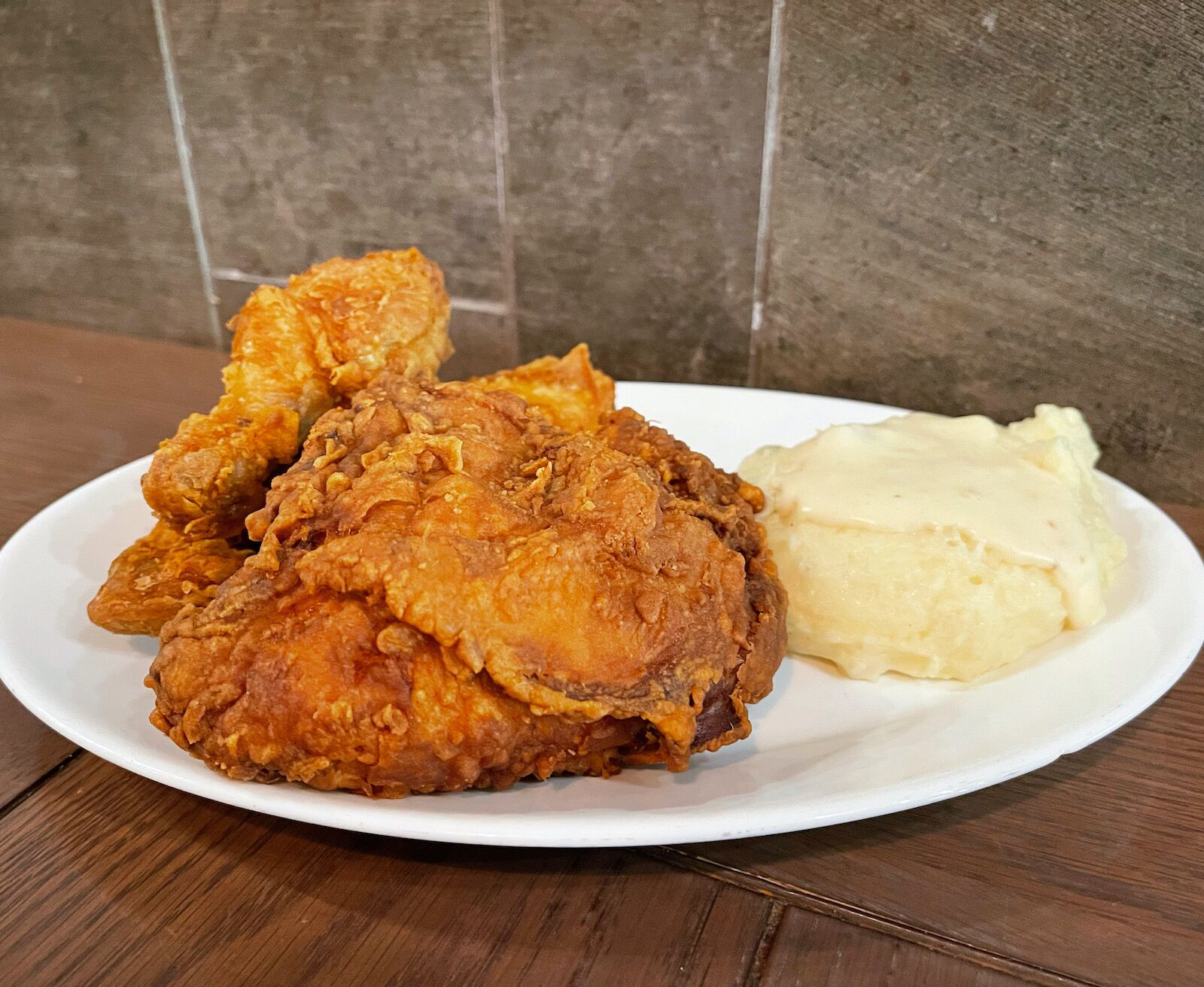 Located just outside the gates of the park, the restaurant that started it all, Mrs. Knott’s Chicken Dinner Restaurant remains open and just as popular as it ever was. While the menu and space have rapidly expanded, the restaurant’s famous fried chicken is still the must-try dish here – and the perfect way to start your excursion inside the park. Paired with a side of house-made biscuits and boysenberry preserves, it’s the peak of fried chicken perfection with a crispy, briney exterior and juicy, meaty center.

The restaurant continues to use the original recipe, minus the lard, and the chicken arrives in their kitchen pre-marinated to keep their recipe a secret. In the restaurant’s lobby, you can catch a glimpse of the Knott family wedding china that was used to serve the very first chicken dinner in 1934.

Where to find it: Mrs. Knott’s Chicken Dinner Restaurant

The boysenberry sees itself in various forms on drink menus across the property, from mojitos to wine, but the park’s boysenberry wheat ale is where it really shines. The medium-bodied draft beer is light and refreshing, while the boysenberry flavor adds an extra tang.

It’s available throughout the theme park resort, including Calico Saloon in the park’s Ghost Town. Swinging doors will beckon you inside this Old West-style watering hole where you never know who will show up (Knott’s is known for their outstanding live actors). Pro tip: Most bars will stock a garnish skewer of boysenberries. Ask for one in your beer.

Where to find it: Calico Saloon

Drawing on inspiration from its location in Southern California, the Elote Dog impresses with flavors of the region at the park’s Fiesta Dogs. The all-beef hot dog is topped with house-made esquites, a tangy-meets-spicy-meets-smokey blend of off-the-cob corn kernels prepared at the park. Wash it down with a Michelada, and it’s the perfect theme park snack, especially when the weather gets warmer. 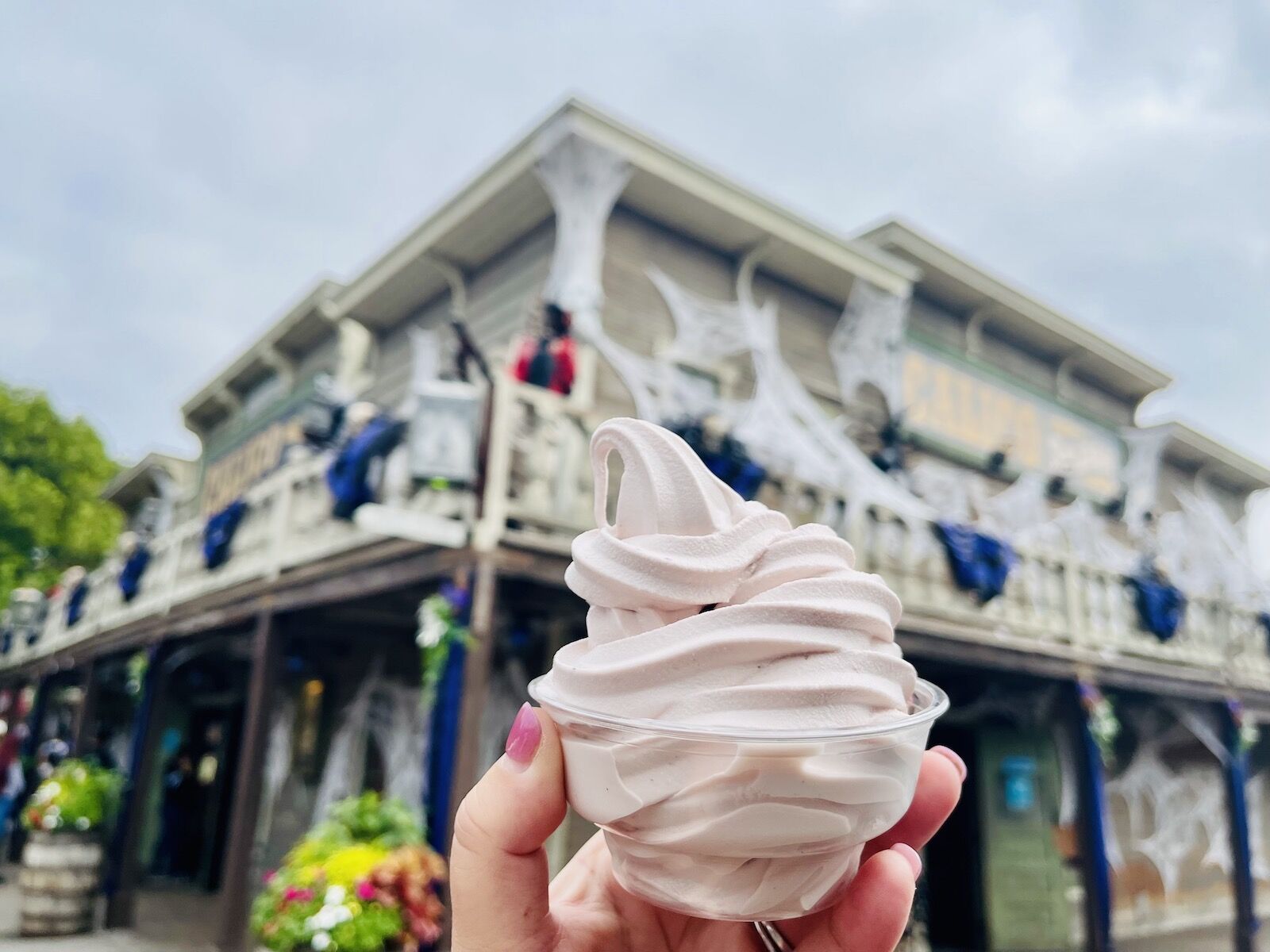 Available from Mix-It-Up Ice Cream, the park’s boysenberry soft serve is the pinnacle of the park’s signature boysenberry flavor, across all its menus. The texture is custard-like and creamy, the flavors of the hybrid fruit come through without being too over powering. Available in a cup or waffle cone, you can also enjoy it between two freshly-baked chocolate chip cookies.

Where to find it: Mix-It-Up Ice Cream

These are not the plain old tater tots you’re used to serving at home when your picky eater won’t try anything else. Known for inventive toppings, like chipotle carnitas, pastrami, and bbq pulled pork, Calico Tater Bites takes the mundane and makes it extra special. The star of the show is under all those toppings, though: a layer of crispy, hot, and expertly fried tater tots. When prepared plain, they are also vegan friendly.

Avoid a mid-afternoon theme park slump with the boysenberry latte. The drink combines espresso with boysenberry flavors, steamed milk, and a touch of whipped cream. It’s surprisingly light and low on the sweetness scale with a tangy kick from the boysenberry that downplays bitter espresso. The perfect pick me up when your kids start to run you ragged on the roller coasters. 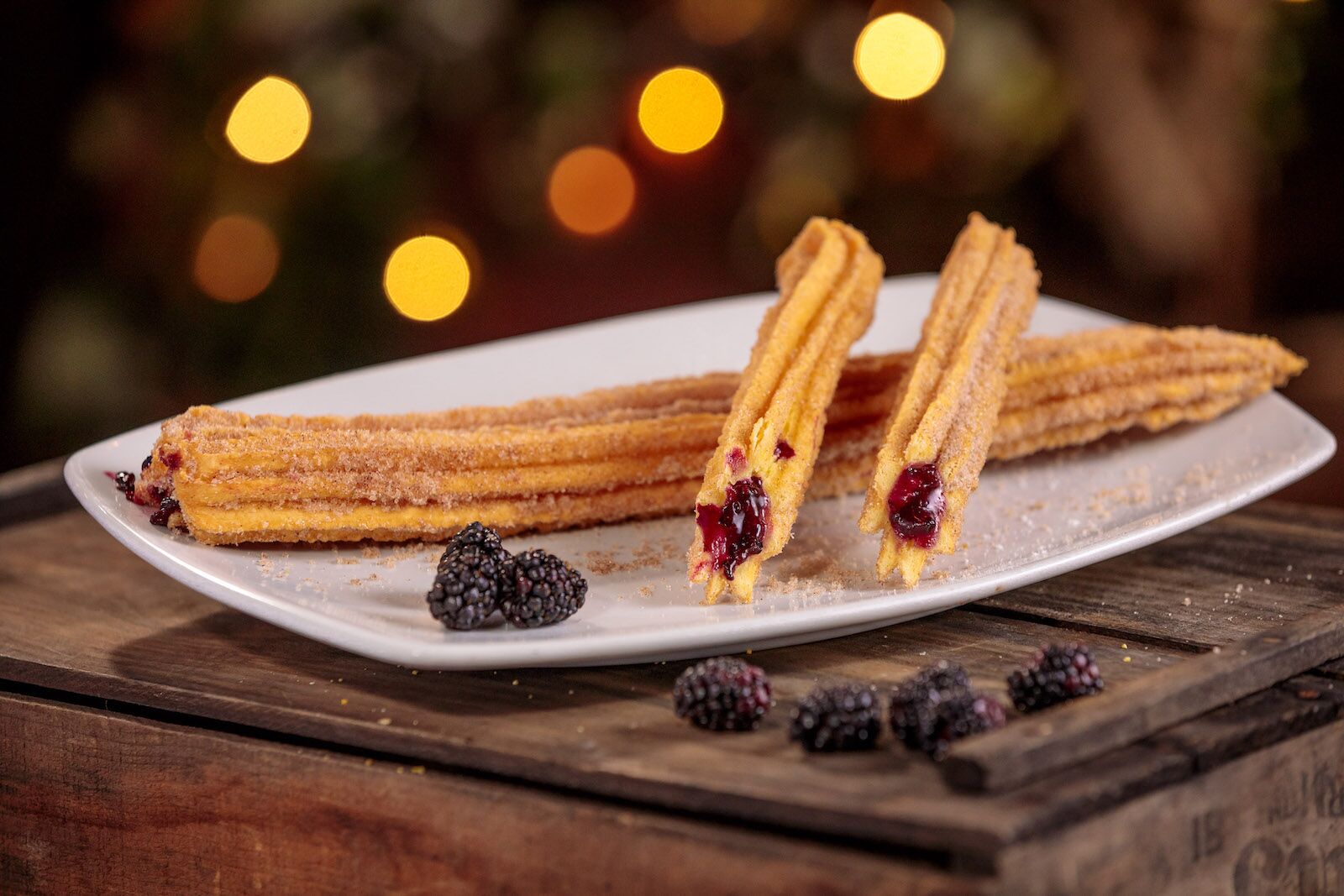 Disney might be famous for its many, many flavors of churros, but not all theme park churros are created equally. The stuffed churros at Knott’s Berry Farm are some of the very best, no matter how many Disney churros you might see pop up on Instagram. The park’s team of churro professionals is trained to hand-roll and fry these from scratch-made dough every day. The result is a churro with a pillowy inside and a light, crunchy exterior. After being fried, they are stuffed with your desired filling, including Bavarian cream or boysenberry jam.

Where to find it: Gourmet Churro Factory 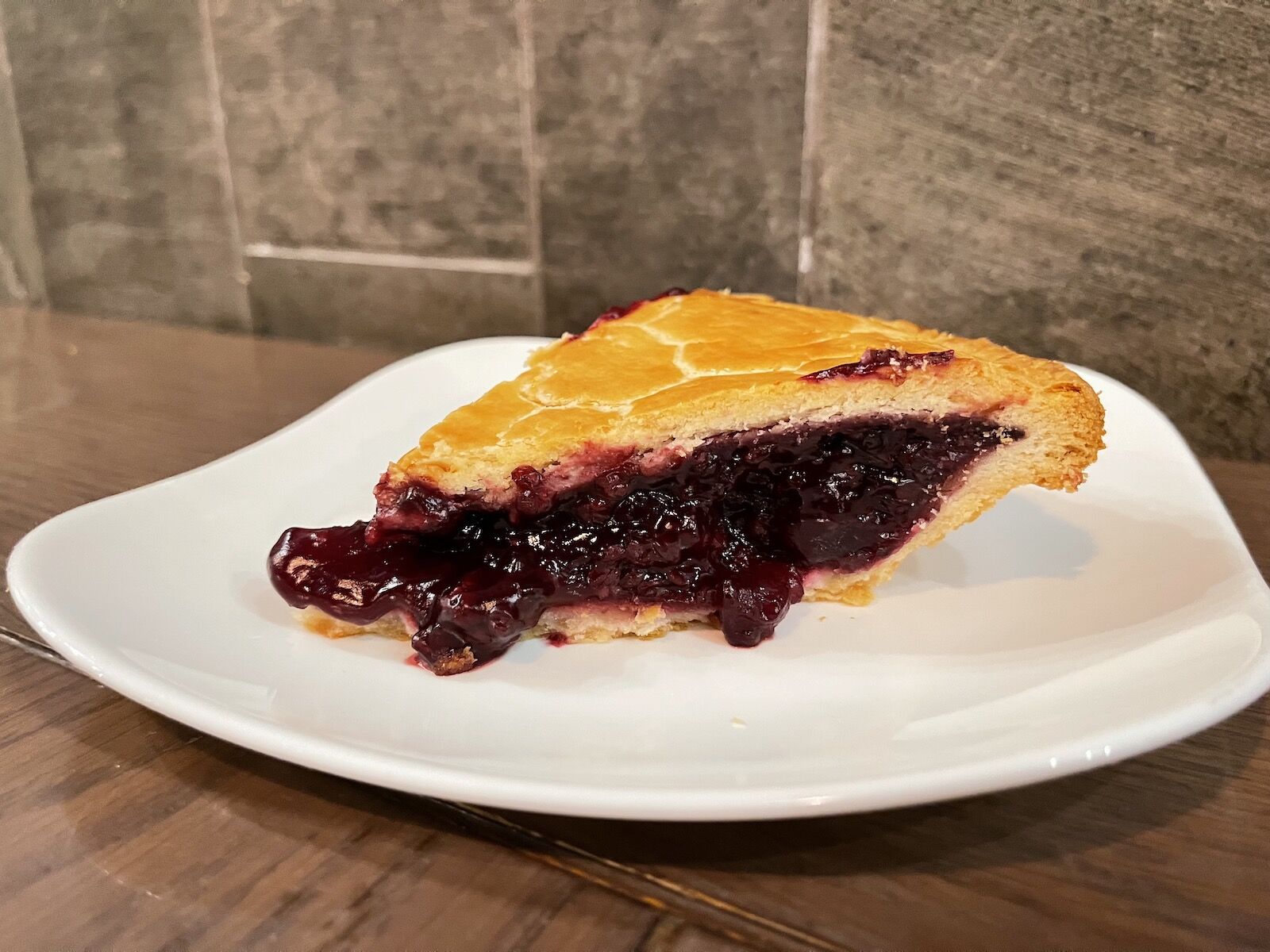 Boysenberry sugar cookies as well as vegan-friendly dessert options await at the park’s Ghost Town Bakery. Here, you can get a taste of a Knott’s original, their famous boysenberry pie that landed them on the map decades ago. Still made in-house, the tangy and fruity flavors of the berry complement the buttery and flaky pie crust. Call it a slice of history.

It’s not all sweets at the park’s beloved Ghost Town Bakery. Served in a fresh-baked sourdough bread bowl, Knott’s Famous Chili is a hearty lunch option loaded with ingredients that blend savory flavors with a hint of sweetness. It’s a filling meal that will fuel you for the rest of your marathon park day but won’t weigh you down before tackling more rides.

Corn dogs are tried-and-true amusement park snacks, but Knott’s Berry Farm brings this iconic bite to a new level. Resist the urge to try their sweet boysenberry cornbread battered hot dog and go straight for the fried cheese stick. Like a jumbo version of the appetizer staple, this snack is rich and delicious — and offers the ultimate cheese pull. The outside is freshly fried, but not greasy, and opens to a heaping pile of warm, melted cheese. It’s decadent and best shared. 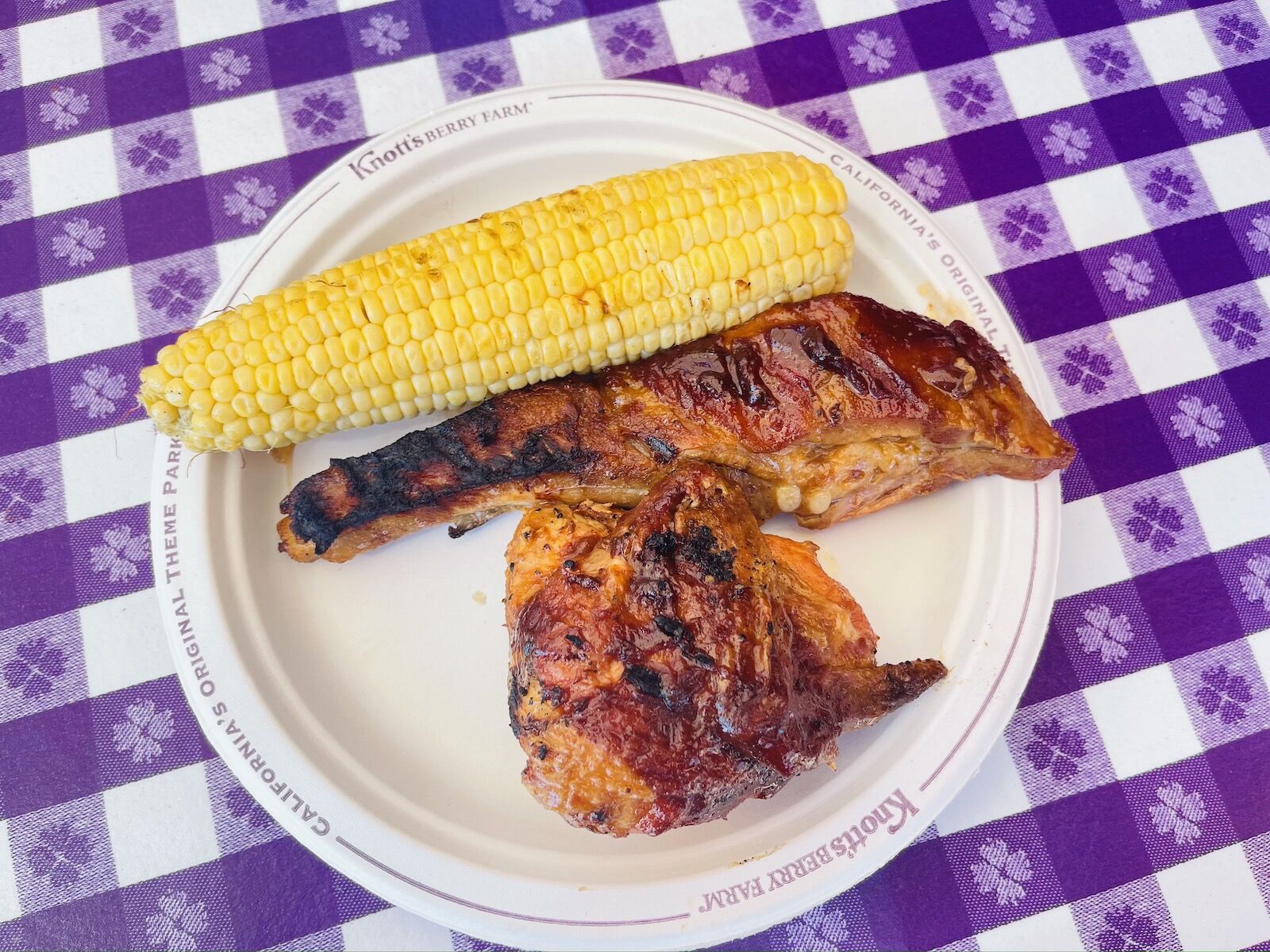 Don’t let its unassuming nature fool you: Fireman’s Brigade BBQ is a no frills establishment, offering standout barbecue in an open-air, quick service setting. The absolute must-try dish is its ¼ chicken and pork rib platter with fire-roasted corn on the cob. After ordering, belly up to the open kitchen as you watch them prepare the deliciously tender meats.

Budget TravelOn Your Visit To Orlando, You Should Actually Stay (and Eat) in Kissimmee
Tagged
Food + Drink Theme Parks California, United States
What did you think of this story?
Meh
Good
Awesome