Disney parks are famous for many things, but the parks’ food offerings are surely at the top of the list. People travel to Disney parks just to try the Dole whip at Magic Kingdom or the yucca fries at Animal Kingdom–and the deep-fried and sugar coated snacks have garnered legions of fans. But many Disney fanatics agree that if you want a great meal or stellar snacks beyond the corn dogs and Mickey pops, you head to Epcot. The best Epcot restaurants offer a range of dishes from, French pastries, to braised pork and grilled seafood.

Since it opened in 1982, Epcot has lured visitors with its attractions based on eleven countries, futuristic aesthetic and permanent World’s Fair concept. More than a million visitors pass through its gates each month to ride the attractions, experience cultural events, and eat and drink their way around the park. And most people who spend a lot of time in Disney parks know that the best Epcot restaurants are miles above the restaurants in any of the other parks. If you’re looking to do Disney on a budget, this might not be the park for you, because you’re going to spend a lot of time eating outdoors.

Epcot has long been my favorite park, not just for its visual appeal, but for its food; I’ve sampled dozens of the park’s offerings from full-service meals to kiosk takeaways, and finally settled on a list of the best Epcot restaurants. For me, it’s not a vacation unless there’s great eats, and the best snacks at Epcot are all worth going out of your way to try. The best Epcot food is fresh made, family friendly, and served in an entertaining environment that makes this park feel like a real international vacation, done Disney style.

The park even hosts a renowned International Food and Wine Festival every fall. From the mezcal margaritas to the flaky pain au chocolat, the food at Epcot is the real deal. Here are the 15 best Epcot restaurants, where you can try the most delicious desserts, dinners, and snacks at the theme park.

If you’ve already reached your limit of fried food, head to Sunshine Seasons, a food court in The Land pavilion of Future World. All the produce served at Sunshine Seasons is produced in The Land’s greenhouses, so it’s truly farm-to-table. The wood-smoked rotisserie chicken and grilled salmon are standouts, and a variety of stir fry, noodle and fruit bowls are some of the healthiest choices in the park, and certainly this could be called the one of the best Epcot restaurants for healthy food.

Just past the back gate to Epcot at the entrance to the World Showcase, is the Rose and Crown, a quintessentially English pub serving fish and chips. Epcot fish and chips are beer-battered hake — crunchy, flavorful, and accompanied by a side of thick English chips best enjoyed when doused in vinegar. The Rose and Crown has an impressive scotch menu, as well as a variety of lagers and stouts on tap that make the perfect accompaniment.  Followed up with a serving of the sticky toffee pudding, it’s a comforting meal in one of the best restaurants in the park. 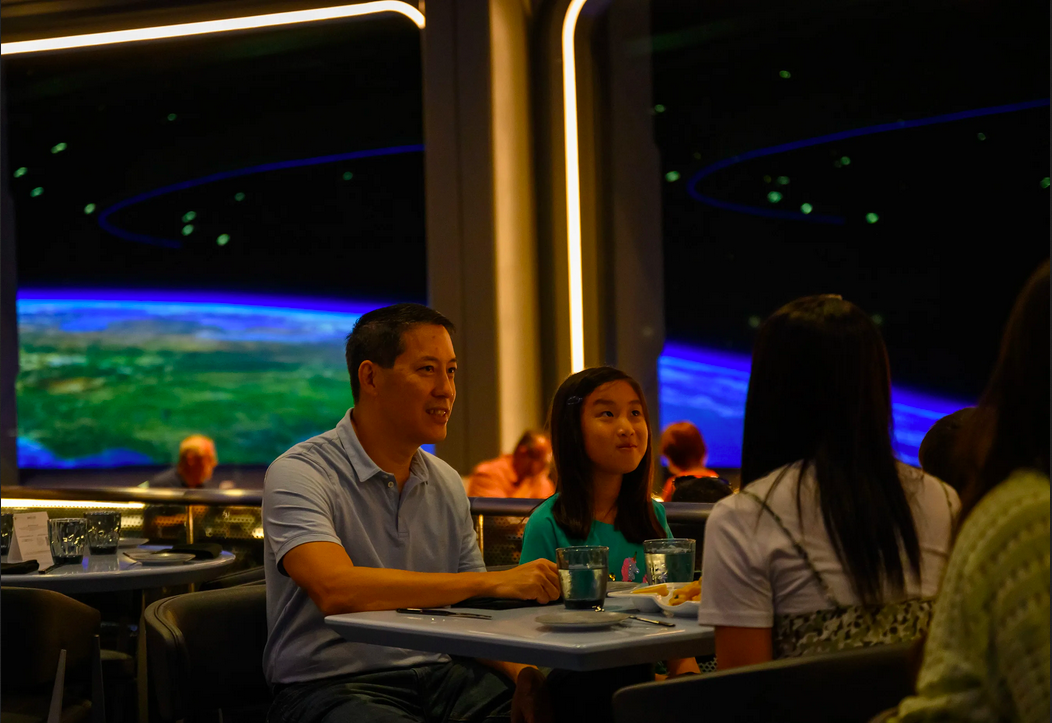 For an out-of-this-world dining experience, try the new Space 220 restaurant in Future World, adjacent to the Mission Space ride.  Space 220 is as much about the atmosphere as the food, and you’ll pay for it.  With a prix fixe of $79 per adult at dinner, the experience doesn’t come cheap.  But there are some gastronomic winners on the mostly American menu.  The Big Bang Burrata with artichokes, peppery arugula and romesco sauce is outstanding, as is the Blue Moon Cauliflower, tempura-fried cauliflower with house made hot sauce. You’re paying for the atmosphere and the chance to observe planet Earth from ‘space’ — if you can get a reservation.  However, many of the salads and small plates can also be found on the Space 220 Lounge menu, which offers seating on a first-come basis.

When your palate craves a spicy kick, the Mexican cuisine at La Hacienda de San Angel is hands-down some of the best food in the park. The meal begins with three complimentary salsas and house made chips, best complimented by one of the many handcrafted margaritas like the spicy El Diablo or the fruity Wild One margarita. Disney knows its margaritas and one could spend an entire evening soaking in tequila, but that would mean missing out on house specialties like the Conchinita Pibil, an achiote marinated braised pork, or the Parillada del Mar, a grilled seafood dish for two.

For traditional American barbecue dishes, the Regal Eagle Smokehouse offers smoked meats like North Carolina style chopped pork butt that is both smoky and tender. The Memphis dry rubbed pork ribs have a sweet and spicy kick that taste even better dipped in any one of the house made barbecue sauces. 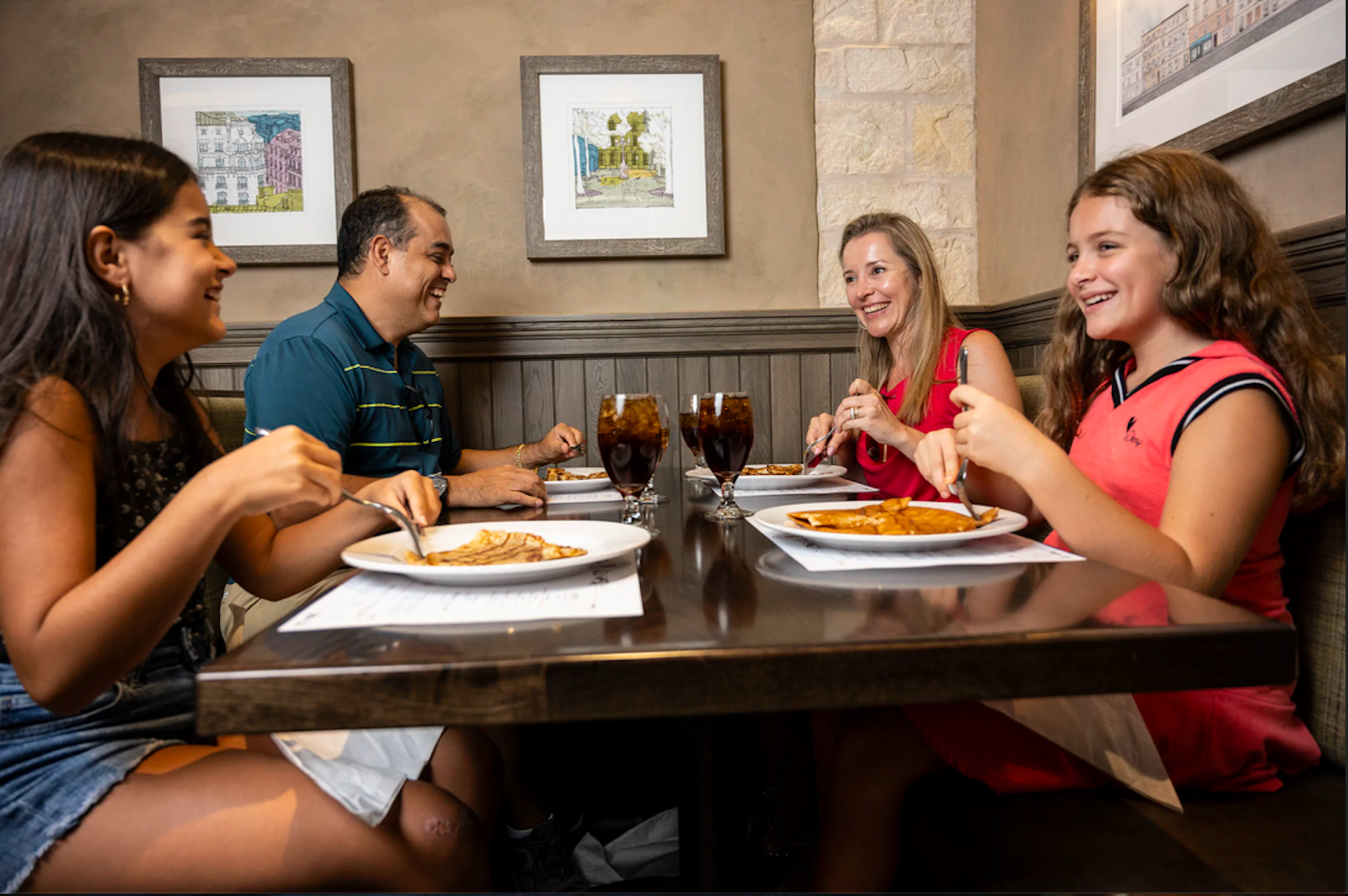 One of Epcot’s newest restaurants, La Crêperie de Paris is inspired by the Brittany region of France and mainly serves crêpes. The thin galettes filled with savory or sweet fillings are a lighter choice, but no less tasty. The Classique galette, a combination of ham and swiss topped with fried egg, is the most popular, but my favorite is the Savoyarde galette, with ham, Raclette cheese and caramelized onion.

Meat lovers will also love Le Cellier, a cozy steakhouse in the Canada pavilion serving prime cuts of beef.  The filets and strips are enjoyable, but you’ll probably enjoy the regional specialties celebrating Canadian cuisine, like Prince Edward Island mussels cooked in a lemony cream sauce served with ciabatta, even more. The poutine offerings like the signature poutine with Canadian cheddar, and a truffle and red wine reduction will remind you why there’s nothing better than cheese curds.  For more cheesy goodness, try the Canadian beer cheese soup, the most popular item on the menu.

Epic Stays8 of the Coolest Airbnbs Near Disney World, Orlando

When it’s time to cool off, head to the Kabuki Café in Japan for some kakigori, a shaved ice treat popular in Japan.  It’s like a sno-cone since it’s essentially shaved ice with flavored syrup, except that kakigori offers a variety of toppings like sweet milk, sweet cherries and strawberries.  It comes in unusual flavors like tangerine and melon and is generously sized for sharing.

If there’s one restaurant that’s an Epcot must-do, it’s Biergarten. Biergarten is a lively dinner and show atmosphere that transports you straight to Germany.  You’ll sit at communal tables while enjoying German classics like schnitzel, sauerkraut, and sausages. The portions are mighty and satisfying. The massive dessert buffet serves a good chocolate cake and an apple strudel that is sweet without being cloying. The convivial polka band and full liter beer pours will have you shouting ‘Oompah!’ in no time. 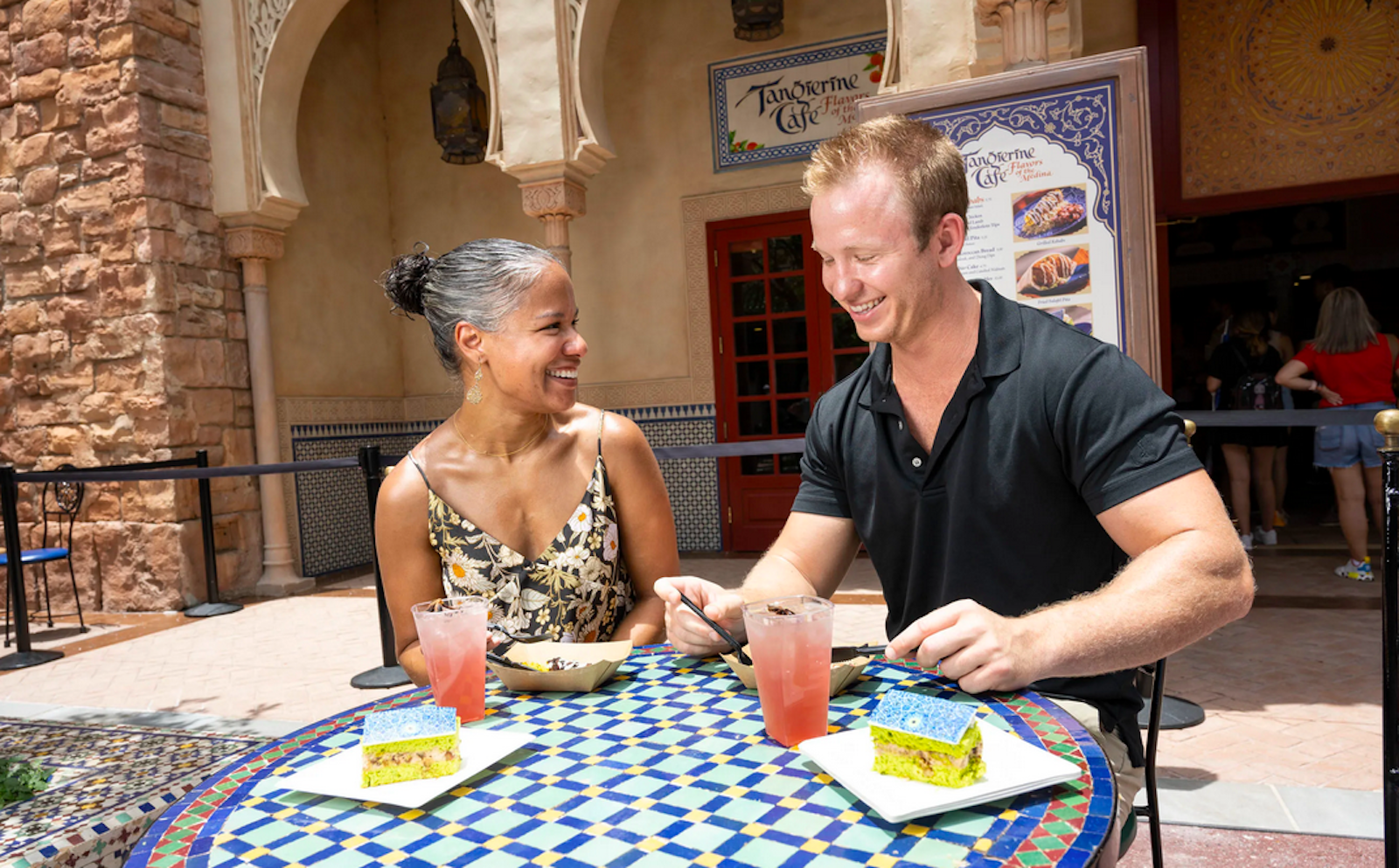 For some of the most flavorful dining in Epcot, head to the Morocco pavilion to Spice Road Table. Spice Road Table is located along the World Showcase Lagoon and features small plates like excellent crispy spiced cauliflower and lemony dolmas.

Also located inside the Morocco pavilion is Tangierine Café.  While the menu at Tangierine Café is simple, the restaurant is located in a stunning tiled courtyard, and the well-seasoned kabobs and pillowy Moroccan bread with homemade hummus are consistently good.

At Les Halles Boulangerie-Pâtisserie everything is delicious because everything on the menu — from the fraises to the napoleons – is made by professional pastry chefs.  If you want to go full monty with the Parisian fantasy, it’s as simple as buying a freshly baked baguette to go. Stroll over the bridge with the sounds of “La Vie en Rose” drifting across the lagoon, while tearing off pieces of crusty baguette and you’ll easily be transported to another world.

Chefs de France is routinely praised for its big portions that come at inexpensive prices. Serving family friendly French cuisine in a casual environment, you’ll find beef bourguignon, cheese plates, and steaks here. On TripAdvisor, visitors regularly commend the waiters for their friendly, attentive service. One of the best Epcot restaurants for French food, families might make a reservation here if they’re looking for a more refined, but not stuffy, night out.

At this teppanyaki style restaurant, where food is cooked by professional chefs at tables at on iron grills in front of diners, except a memorable experience. For people in the know, its considered one of the best Epcot restaurants, if not the best. The chefs provide entertainment to the guests, so you’re really getting both dinner and a show out of your reservation at Teppan Edo. The menu offers sushi, grilled shrimp, and even up scale options like lobster tail and filet mignon. Seated with other guests at communal tables, you just might end making friends with your seat mate.

The main draw of Garden Grill is that it rotates, so you’ll be getting a full view of the agricultural-themed The Land Pavilion. Located near the Living with the Land boat cruise, this restaurant focuses on food inspired by harvests and farm life. This restaurant is a great option for kids too, because Chip, Dale, and more Disney characters come around the tables to take pictures and chat with the biggest Disney fans at your table.

Family TravelDisneyland on a Budget: How To Save Hundreds on a Family Trip
Tagged
Food + Drink Restaurants + Bars Orlando, FL, United States
What did you think of this story?
Meh
Good
Awesome

8 of the Coolest Airbnbs Near Disney World, Orlando
This Program Lets You Reserve a Spot in the TSA Security Line Before Arriving at the Airport
The Best 11 Airbnbs Near Universal Studios

The Dos and Dont's of a Manatee Viewing Expedition, According To a Tour Operator

The Best 11 Airbnbs Near Universal Studios