The first time Bryan Cranston mentioned working with Aaron Paul again, the pair were sitting in a sushi bar. The two actors, who had become close friends while working together on the set of the now-legendary drama about a chemistry teacher turned meth dealer, contemplated working together on a stage play, but Paul had other ideas: He suggested going into the booze business.

“He almost did a spit take,” Paul told a group of journalists during a virtual tasting of the mezcal they eventually released, Dos Hombres. “He said, ‘The shitty spirit with the worm at the bottom?’ he had a completely different sort of idea of what Mezcal was all about.” 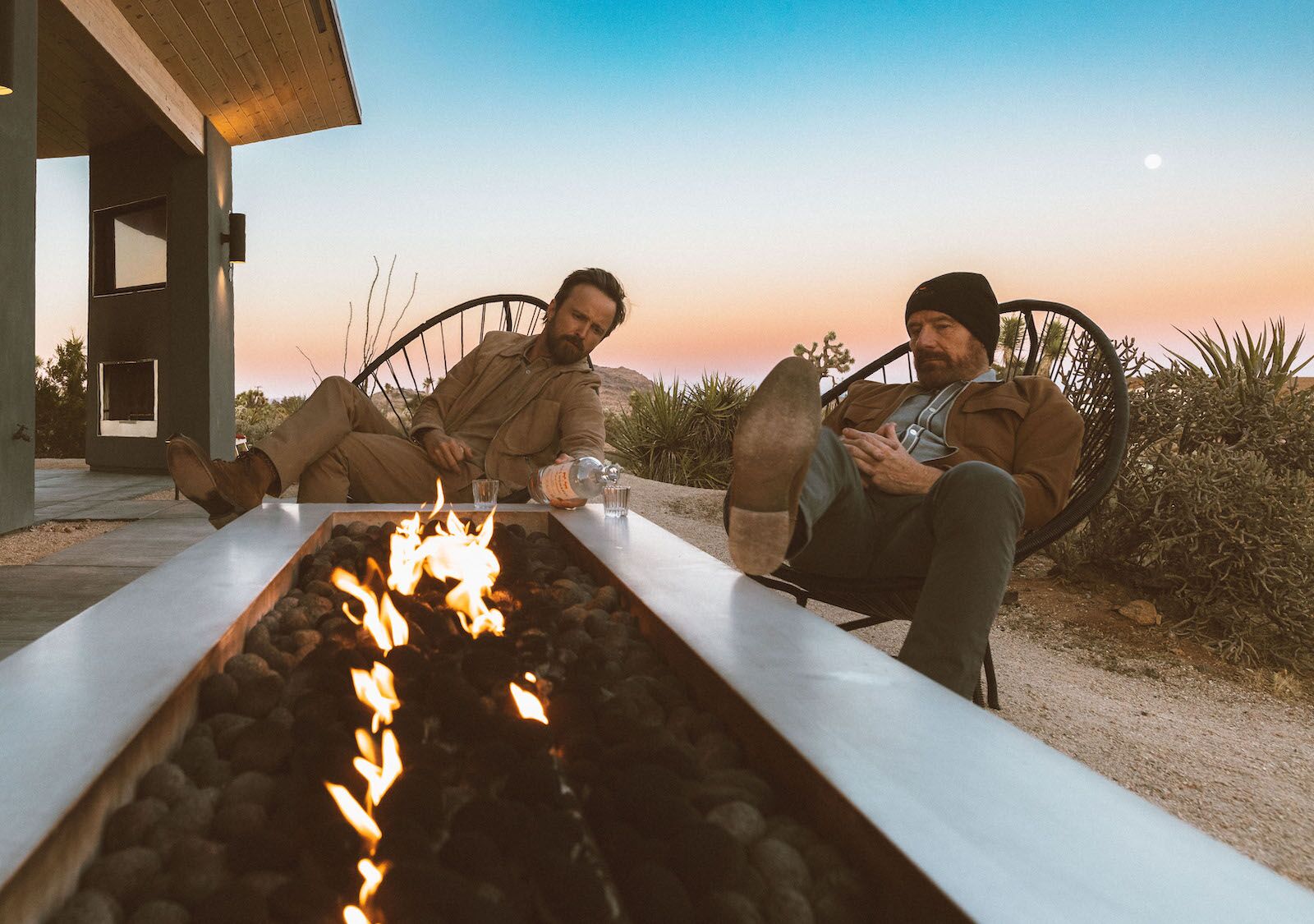 Cranston eventually agreed to the plan, under one condition: He insisted that he and Paul travel to Oaxaca and try out the “juice” (the spirit produced from the agave plant) for themselves before committing to producing their own brand of mezcal.

“We’re not about to slap our names on a bottle,” said Cranston. “We have to be passionately involved in the entire operation or else we’re just not interested.”

Immediately, Paul was skeptical. He confessed that in the back of his head he was thinking, “We’re never going to find it.” The two actors have such different palates when it comes to spirits that he figured they would never agree on a mezcal they both loved. And at first, it seemed like Paul’s suspicions would prove correct.

Paul and Cranston estimate they tried 100 different mezcals all over Oaxaca, and while of them were good, they refused to “just settle for anything.” Then, on the last day of their trip, they stopped in a village three hours outside of Oaxaca called San Luis Del Rio, where just 500 people live and there is, according to Cranston, just one landline telephone. This was their last chance. They spent the day sampling mezcal from four different family owned operations, but still couldn’t find one that they loved.

On the way back to their car, they were disappointed but determined to make a return trip to Mexico to keep the search going. It was then that a kid approached the pair and their team, and beckoned them to follow him.

“So we follow this kid and we get to this riverbed. He’s like, ‘We have to, you know, hike through the river.’ This is during the rainy season, and there’s a guy standing on the opposite end of the river, looking at us holding a giant machete,” Paul said. “So we take off our boots, we hike up our pants and we start walking through the river towards the guy with the machete, and he just starts chopping a little trail for us.”

10 minutes later, the group arrived at a “this little operation” they had never seen or heard of before.

“We see these two donkeys pulling giant stone wheels mashing up freshly smoked agave. It was just, it just felt so romantic,” said Paul. “We were just really crossing our fingers and toes and we sit down and we sample it straight. And it’s just one of those ‘Aha’ moments. We looked at each other. We didn’t say anything. We tasted it again. And [we were] like, ‘Holy shit. I think we found it.’”

At first, the pair couldn’t believe their luck. They were even a little skeptical that they actually loved that mezcal as much as they thought they did. After all, this was their last chance to find their dream juice. Were they just convincing themselves that they liked it, to make the trip seem worth it?

In order to confirm that their instincts were correct, they took some samples back to the United States, where they conducted a blind taste test with friends and family. Their mezcal was a hit. They had found what they were looking for—almost entirely by accident. In 2019, Paul and Cranston released Dos Hombres mezcal.

“If that kid didn’t see us, if we just missed that kid, Dos Hombres possibly would not exist,” said Paul.

Paul and Cranston work with mezcalero Gregorio Velasco (who also produces mezcal for Pierde Almas), and six months into their partnership, the pair made him a part owner of Dos Hombres. And they are giving back to the town that gave them the mezcal they are so passionate about in kind: Paul and Cranston paid for a new water filtration system for the town and Cranston is in talks with the governor of Oaxaca to get a rocky switch back road leading into the town paved, and they hope to have a cell tower installed in the future, too.

“We don’t want to overstep by any means. What they’re doing is perfect down there. But we wanted to let them know our hands are constantly raised or whatever they may need,” Paul explained.

San Luis Del Rio deserves the love. The mezcal produced there for Dos Hombres is a pungent to say the least – smoky doesn’t even begin to describe the palpable smoke that hits the throat when you take a sip; it’s more like a slow burning fire. Paul prefers to drink his Dos Hombres chilled, on the rocks – one large cube to be exact (I made a mezcal margarita and added an ice cube as well, which lessened the impact of the spirit, in case you’re like me and not used to the strength of mezcal). Either way, it’s “sacrilegious” to shoot mezcal, according to Cranston.

As for what’s next for Dos Hombres, the pair want to keep pushing their mezcal to reach more glasses and bars. There are no limits on what they think they can do.