My leg was asleep. I’d been crammed in the back of a Jeep rumbling through the highlands of Nepal for just over seven hours when it finally pulled over by an unmarked dirt road and rumbled to a stop. We were surrounded by jungle. Below us, a river, fed by snowmelt from a distant mountain top, sparkled and swirled. Above, the foothills of the Himalayas towered, both inviting and intimidating all at once.

Bikram, our guide, pointed to a cluster of rooftops at the top of a distant hill.

Over the course of a nine-day trek through Nepal, our group would discover that Bikram has a gift for explaining the elevation changes to expect throughout the day in the simplest of terms. “Up” means steep. “Up, up” means, well, crazy steep. And “Nepali flat” means you’re going to huff and puff your way to the top of a ridge, only to lose half that elevation on a knee-buckling-downhill.

Sure enough, after three hours of bun-busting elevation changes, one quintessential suspension bridge, countless photo breaks, and a very close call in which one of our party nearly tumbled over the hillside, we rounded a corner and spotted Gre. Traditional Tibetan prayer flags spanned the terraced hillside, rippling in the soft, autumn breeze. A mishmash of homes dotted the hillside — some the old-style stacked stone with tin roof, many more new or under construction. Rebar poked out the top of thick cement walls, just waiting for the rupees to build a second story.

Our host, Nima Pembar Tamang, appeared on the trail in front of us. His big, kind eyes glinted as he smiled. “Namaste!” he called out. Nima and Bikram embraced, calling each other “brother” and “friend.” That night we learned Bikram and Nima had met after “The Earthquake.” Earthquakes aren’t altogether uncommon in Nepal, but everyone knows which one you’re referring to when you say, “The Earthquake”.

The day the mountains rumbled 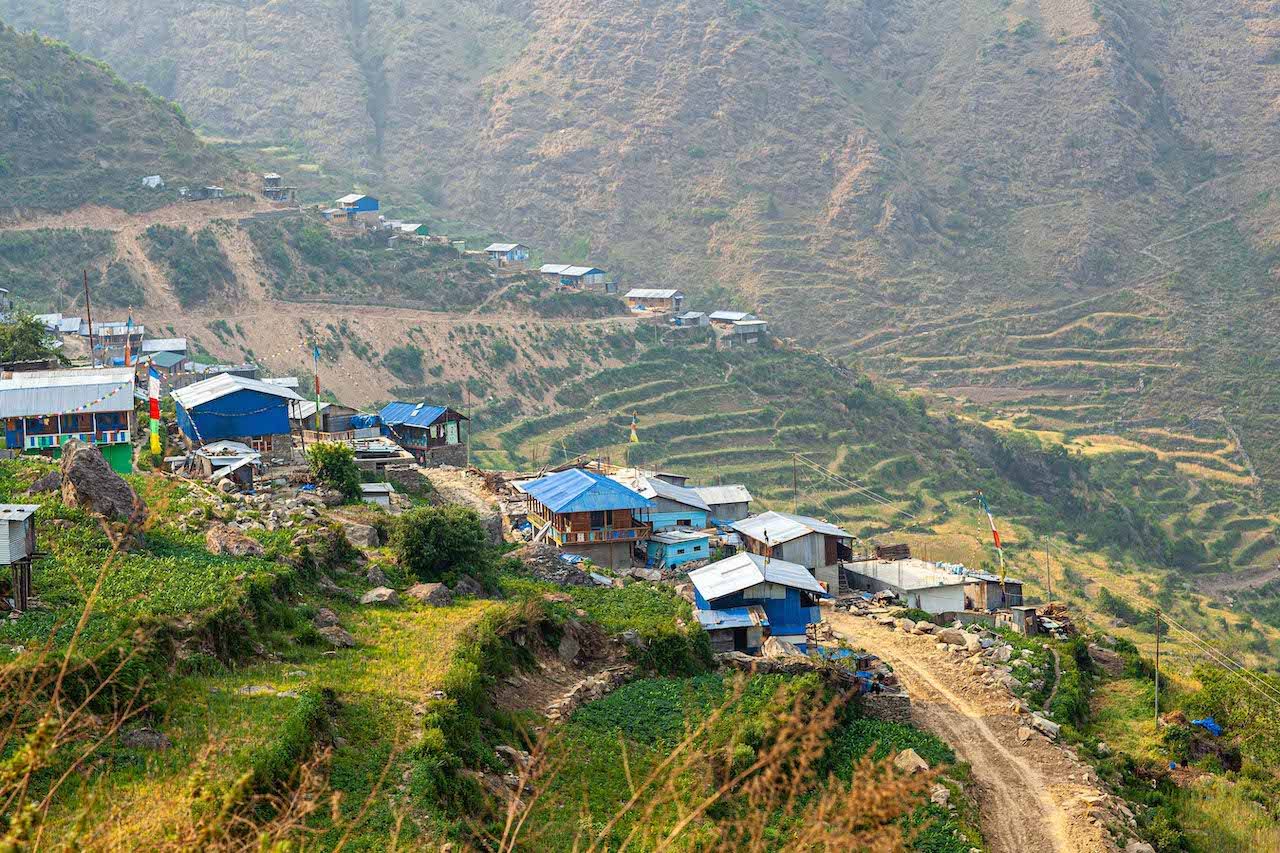 At 11:56 AM on April 25, 2015, the Gorkha earthquake ripped through central Nepal with a magnitude of 7.8. It flattened entire villages, and triggered avalanches on Mount Everest and in Langtang National Park, near Gre. Nine thousand people died, nearly 22,000 were injured, and hundreds of thousands lost their homes. It was a devastating tragedy and a crippling setback for a small country earnestly striving to develop.

Gre itself is part of that development, an ideal first stop on most treks through Langtang National Park or along the Tamang Heritage Trail. Located just two to three hours on foot from Syabru Besi, the village can also be a memorable day trip. A list of trekking agencies that can help you make a reservation is available on the Gre Village Community Homestay website, which is how we ended up in Nima’s kitchen.

Nima served us a traditional dinner of dhal bhat while Bikram told us how they’d carried 94-pound cement sacks “up, up” the winding, jungle footpaths to rebuild homes, schools, bridges, and everything else that had crumbled. I made a mental note to remind myself of this anecdote the next time my backpack felt heavy.

In the kitchen, Nima’s wife Dahlia nursed Sri Maya, the youngest of their four daughters. At just six months old she was already the spitting image of Nima with bright, wide eyes; arched brows; and an infectious smile. Sri Maya knew nothing of the devastation her village had endured. Her father couldn’t forget.

Like many young men in the village, Nima had gone abroad to find work. He was packing eggs on a chicken farm in Malaysia when the earthquake hit Gre. For three days he prayed. “Please, let my family be okay.”

As he told us his story, his voice cracked and his eyes brimmed with tears. Finally, he got a call through. His family was alive. But his home was demolished.

A community in ruins begins to rebuild 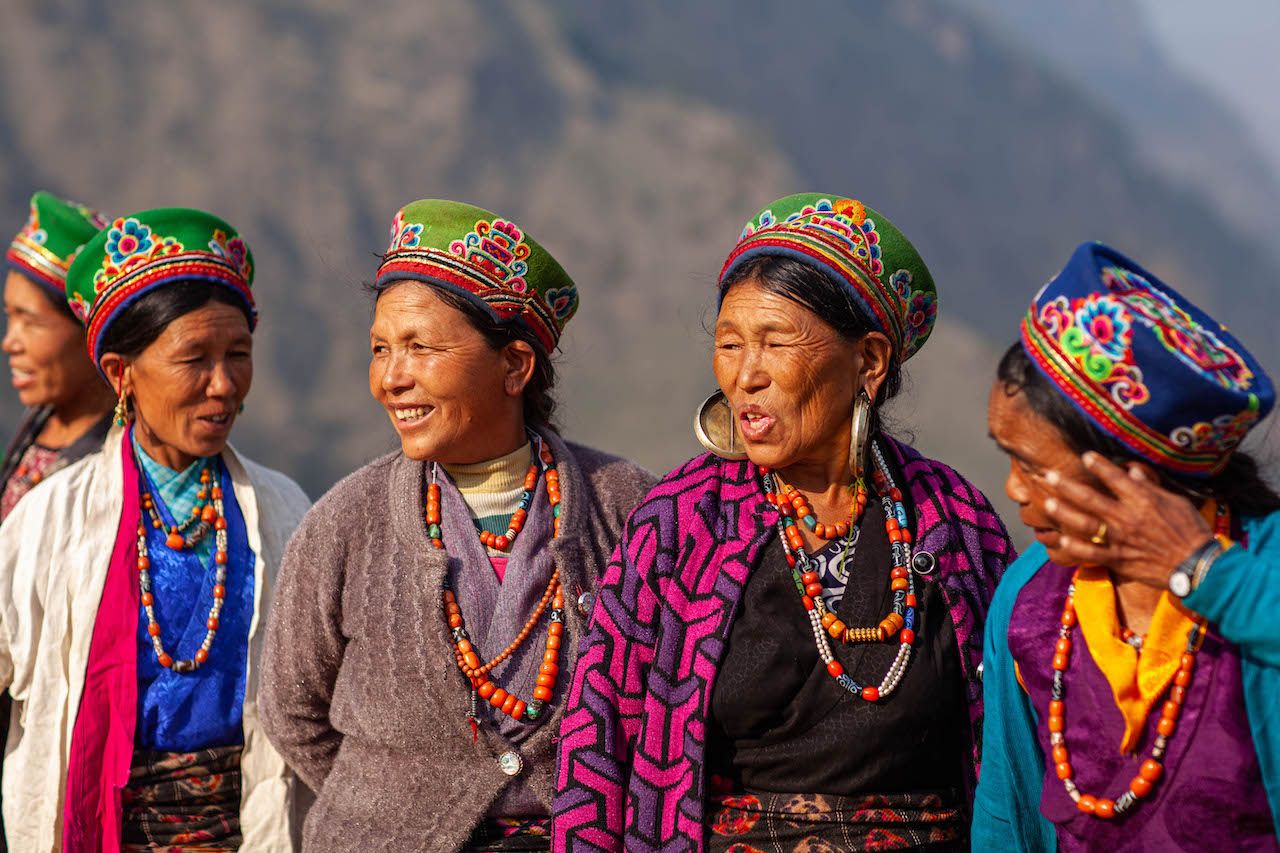 Nima’s is a common story in Gre. Saru Khadka, with an organization called Girls Empowered by Travel, spoke with several Gre residents for this article, including Norsyangmo Ama Tamang. Because many speak limited English, their quotes are seen here translated by Khadka.

“Suddenly everyone started to shake,” said Norsyangmo Ama Tamang. “I heard screaming and crying too. I turned toward my house and saw there was dust everywhere. I was so tense thinking where is my husband, where is my son, where is my daughter? And I just fainted.”

As devastating as the earthquake was, the death toll could have been much worse. Two serendipitous events drew most of the villagers out of their homes the morning the earthquake hit. First, a training on packaging dhal for the market, and second, the spectacle of an excavator pushing boulders down the hill.

“Somehow everyone got to the open area on the hill and stayed together,” said Gre resident Pasang Dekhi Tamang. “But we were starving because everything was under the houses, covered by soil and rocks. Everyone was shivering, so we stood close to each other to stay warm. After some time we managed to make a small hut. There was some food found, and we shared it.”

Aid and supplies were slow to trickle in. Families lived in makeshift tarpaulin shelters for months. Little by little, they rebuilt. First with simple tin-roof shacks, but eventually, safer cement and earthquake-ready homes started popping up around the village. These new homes represent safety. They also provide an opportunity to attract Nepal’s most lucrative industry — tourism.

A new hope through tourism 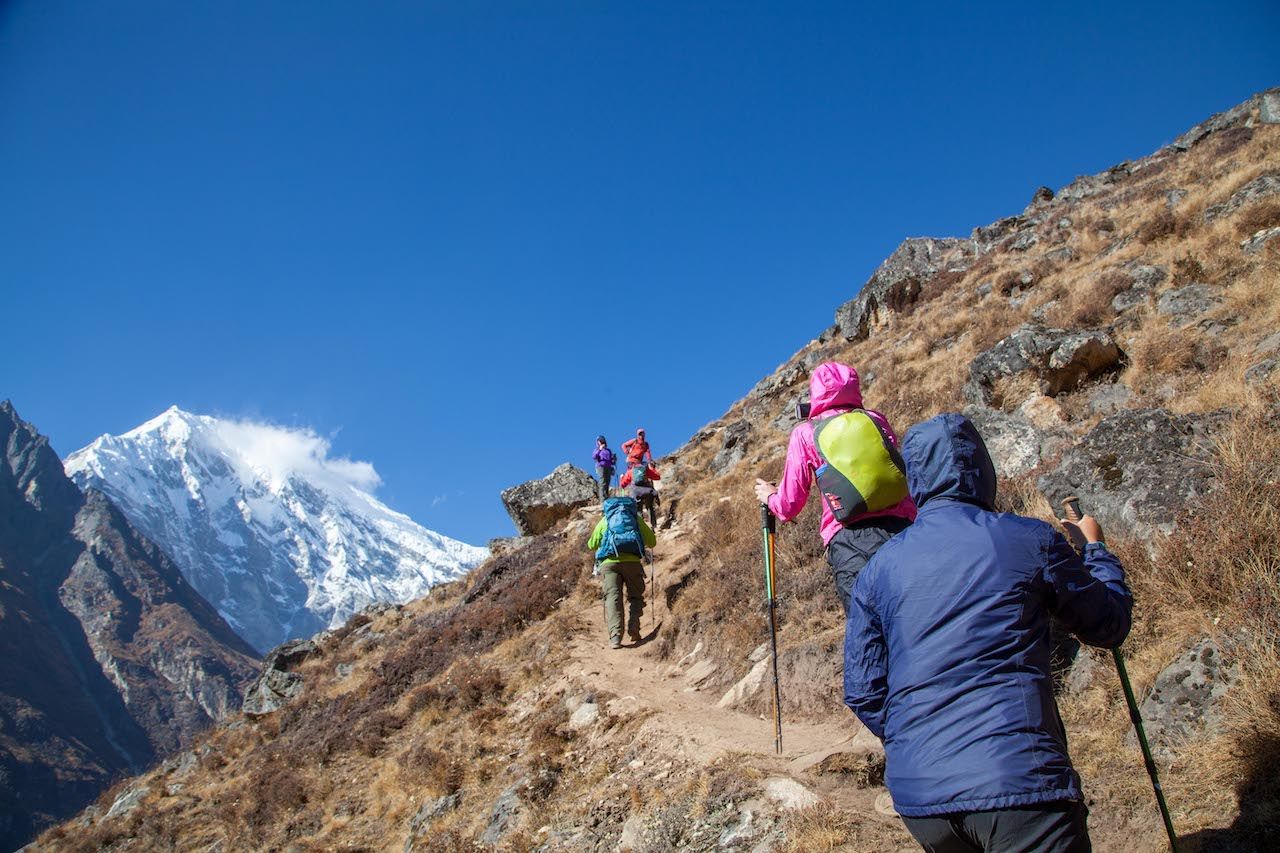 Before the earthquake, the Langtang region where Gre sits was an emerging backpacking destination. Then and now, the region has spectacular hiking with fewer crowds than Everest or Annapurna. Routes range from family-friendly to extreme, and they walk visitors through the traditions, colorful dress, and lively music of Tamang culture. Now, the villagers share that culture by opening their new homes to visitors as the Gre Village Community Homestay.

A community homestay is like a co-op. When a traveler stays, that family keeps most of the payment as income but pays a portion into a community fund. This fund finances projects that benefit the whole community — water infrastructure, waste management, school improvements, or whatever is needed most when funding is available.

“The Community Homestay has been like a ray of hope for us,” Norsyangmo Ama Tamang said through the interpreter. “We are happy for the help from the organization, and we are also doing things on our own level. We are focusing on the cleanliness of the village and the sanitation of our guests.”

Hosting guests has also given her a desire to hear their stories and share her own. “Now, I want to learn English so I can welcome guests and communicate with them.”

Home is where your backpack is — seeing Gre for yourself 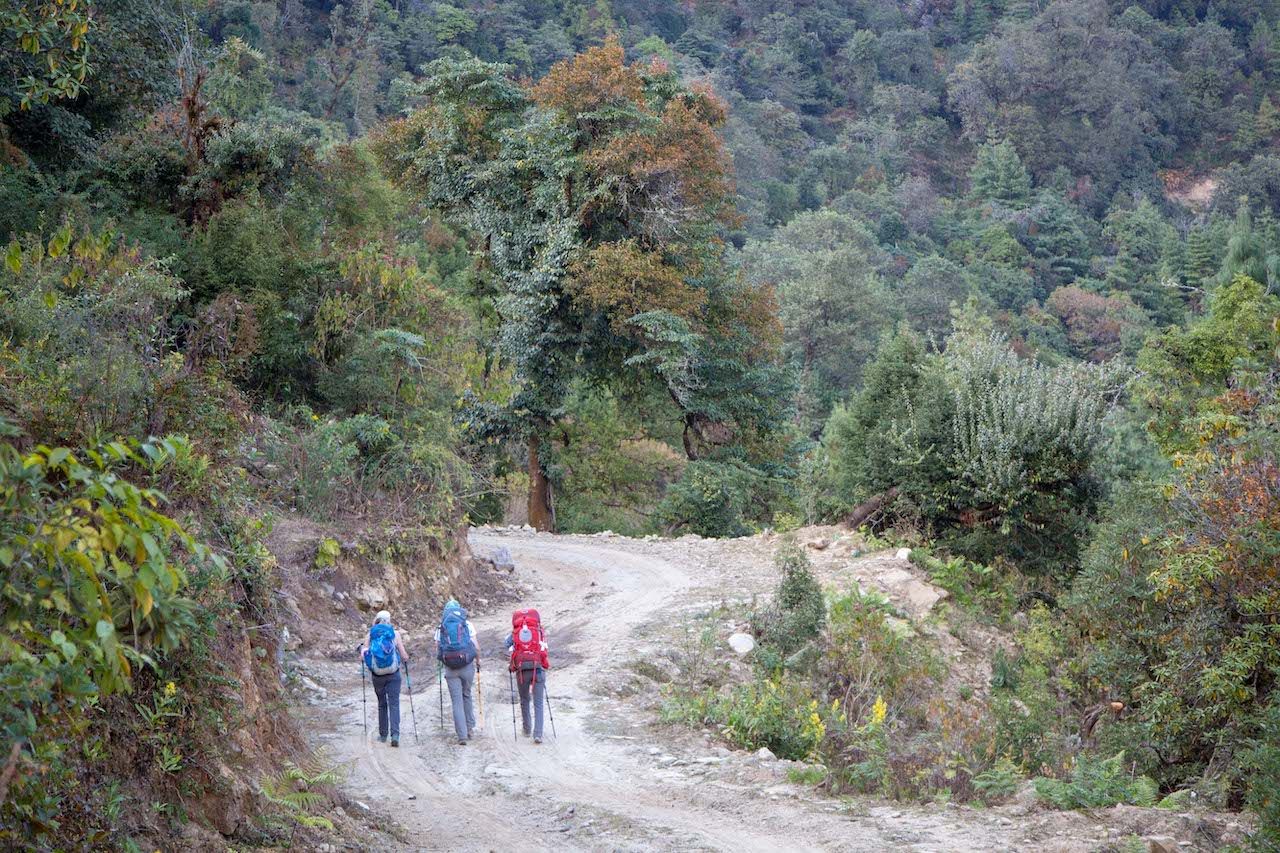 To reach Gre from Kathmandu, take the public bus from Kathmandu Machhapokhari New Buspark, about a nine-hour ride, for 700 Indian rupees (about six USD). Or hop in a shared “local” Jeep, which cuts the ride down to seven hours but costs between 800 and 1000 INR (seven-nine USD). Gre is a three-hour hike southwest, and it’s one of those places that feels both foreign and comfortable all at once. Not in the watered-down way of Thamel, Kathmandu’s tourist district, but the type of place a traveler could find themselves staying. Visiting is also possible through organized treks with groups such as Girls Empowered by Travel.

No matter how you visit, staying with a community homestay ensures your dollars are going to help the village work towards the future. It’s also sure to leave a mark on you, as well. As you roll your sleeping bag out at night, take a moment to feel gratitude for the cement walls around you. To you, it’s cement. To Gre, it’s a new beginning. A rallying call that says, “Never again will I watch my house crumble.”

Hiking5 Gorgeous Himalayan Treks You Don’t Need To Train For
Tagged
Activism Hiking Insider Guides Nepal
What did you think of this story?
Meh
Good
Awesome