Covering a nine-mile stretch of faith along the El Camino Real de Tierra Adentro, twisting through south Texas outside of El Paso, is the “Royal Road of the Interior.” This is the oldest — and once the longest — road in North America, running from Mexico City to Santa Fe. It contains three historic churches, which uniquely blend Mexican, Spanish, and Native American culture into centuries of spiritual and historic traditions along the Rio Grande River.

The stretch is known as the El Paso Mission Trail, and it takes you on a journey through faith on the frontier dating back to the late 1600s when Spanish explorers and missionaries traveled north from Mexico. In 1680, the Pueblo Revolt forced almost 2,000 Spaniards along with hundreds of Tigua and Piro Indians to flee northern New Mexico using the El Camino Real to El Paso del Norte. Along the way, three churches were built, among the oldest parishes in Texas and known as the trail’s three missions. You can enter each of the historic adobe churches for the ultimate crash course in Southwest history. Here’s how to make the trip.

Start in the oldest town in Texas. 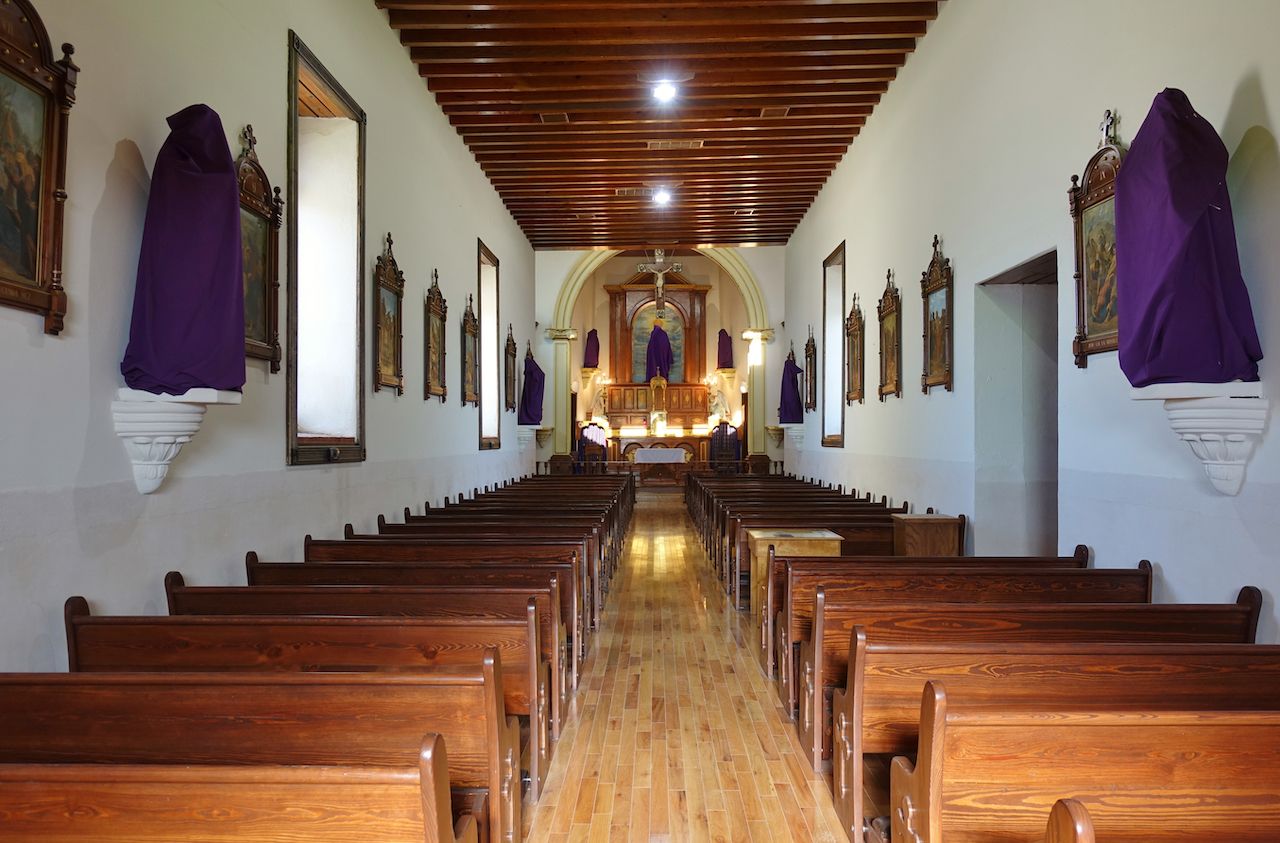 The El Paso Mission Trail is about 20 minutes southeast of downtown El Paso. Join in Ysleta, the oldest town in Texas and home to the original mission. The first mass was held here on October 12, 1680, in the original church of the first mission, likely made of mud-chinked logs and willow reeds. Meaning “little island,” Ysleta was named after the original Tigua Pueblo of La Isleta in New Mexico, and the Native American influence in this mission is from the Tiguas.

They founded the Ysleta del Sur Indian Pueblo in 1682, with its cornerstone being a more permanent Ysleta Mission built of adobe, though it was destroyed by a flood in 1740. After the 1829 flood destroyed the second building, it took until 1851 for the building that is the present-day Ysleta Mission to reopen. In 1907, most of the church was destroyed once again, by fire this time, and rebuilt around the unscathed sacristy and what remained of the adobe walls. Before you enter the church, check out the grounds and the building’s exterior.

The mission tends to feel like the hub of town — the bus station and visitors center are catty-corner to the facility, and the Speaking Rock Entertainment Center shares a parking lot with the church. Step back from the church’s door to see the statue of San Antonio de Padua, patron saint of the Tiguas in the gable. Just to the right is the silvery-white bell tower dome, which almost glitters in the sunlight.

The inside of the church is surprisingly simple, with wooden beams across the ceiling, wood pews, and floor. There are a few plain windows allowing for natural light to stream in. You can almost feel the history as you walk through the narthex — the Stations of the Cross are depicted in paintings housed in simple wood frames, and the ornate Our Lady of Guadalupe shrine is tucked away on the right.

The altar nave has gold accented wood, a painted ceiling and a dramatic crucifixion at the top of the nave. As you approach the altar, two other statues come into view along with two simple stained glass round windows — to the right of the altar is Our Lady of Mount Carmel, and on the left is Saint Kateri Tekakwitha, the first Native American recognized as a saint by the Catholic Church. Just below her is a fairly graphic Santo Entierro (Christ in the Coffin), so be prepared to feel a bit of shock. On the feet is a date stamp of 1722. It is believed to have been brought from Mexico and ferried across the Rio Grande before arriving here in Ysleta.

Socorro Mission is the second oldest — by one day. 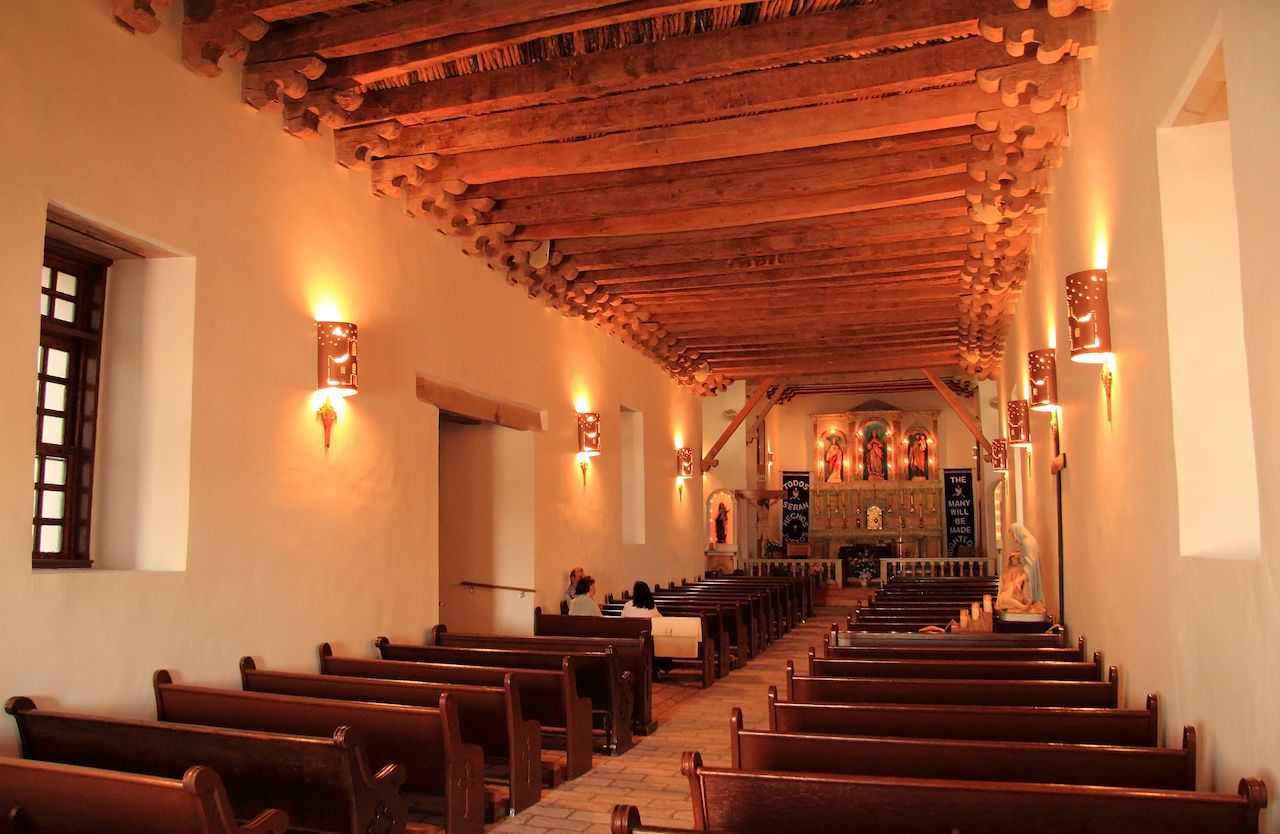 Once you’ve walked through the Ysleta Mission, drive the three miles up Socorro Road to Socorro Mission. This church seems larger, in part because it is surrounded by open space. Socorro means “help.” Like the Tiguas, the Piro Indians fled New Mexico because of the Pueblo Revolt of 1680. According to records, Fray Antonio Guerra delivered the first mass on October 13, 1680, one day after the first mass in Ysleta. Like Yselta, the first two buildings were destroyed in the floods of 1740 and 1829. The building you see today was completed in 1843 though it fell into disarray over the ensuing 150 years. It took a 10-year, community-based collaboration to restore the mission, which reopened in 2005.

The inside is simpler than Ysleta with only two lines of wooden pews. Along the two long adobe walls of the church are four-paned windows and simple wooden crosses illuminated by sconces for the Stations of the Cross. Of the three churches on the El Paso Mission Trail, Socorro has the least ornate nave, allowing the vividly colored altar to stand as the focal point. Be sure to look up at the intricate design of the ceiling as you walk through — the carved cottonwood and cypress beams, called vigas, have designs painted on them dating back to 1691. They were actually salvaged from Socorro’s first mission after the flood waters receded, making them among the most historic artifacts in any of the three churches. It is believed the Piro people painted the beams with plant-based pigments and the diamond represents the four directions, with the circle as the sun.

There are a few other sites worth a quick stop within the first mile of the six-mile trek to San Elizario from Socorro Mission. Tienda de Carbajal was part of a walled hacienda dating back to 1852. Look for the building with Sombras del Pasado, now closed, painted on the side. Casa Ortiz was built in the late 1700s by Father Ramon Ortiz. The hacienda’s thick adobe walls with cottonwood and willow vigas make it an excellent example of Spanish colonial frontier architecture.

The Chapel (that wasn’t) and the Presidio 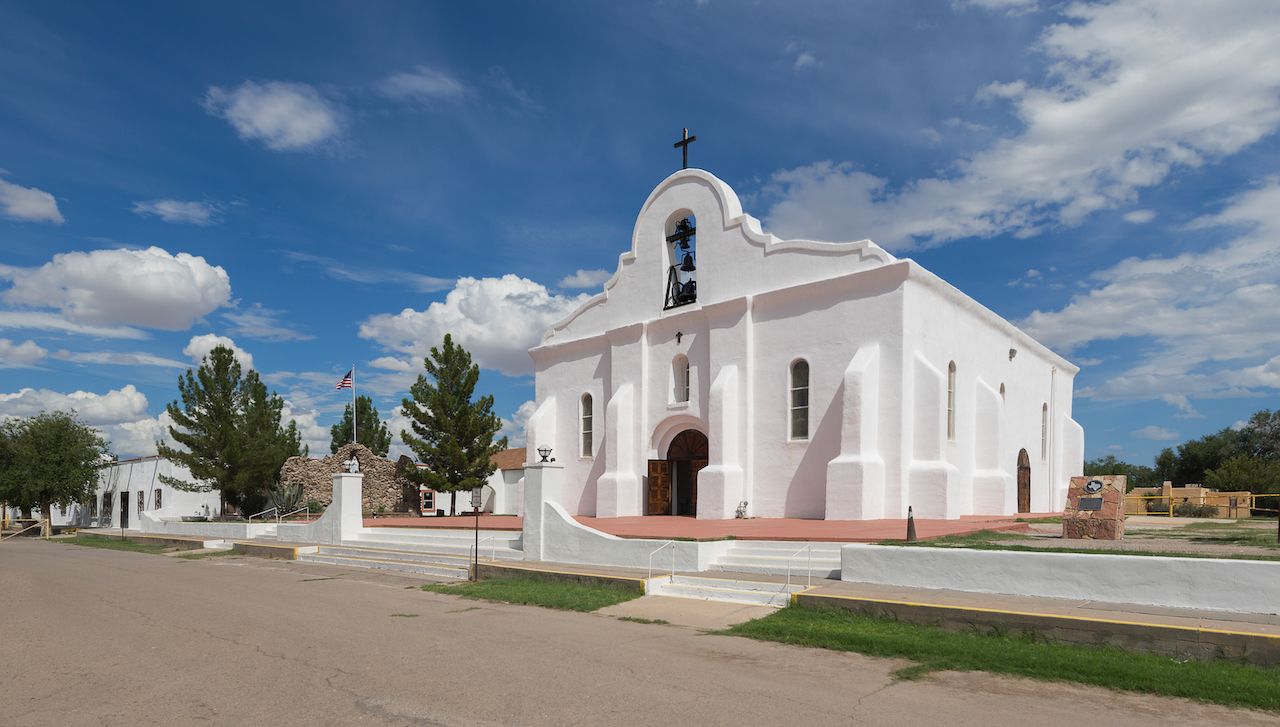 The architecture of San Elizario Chapel, the final mission on the trail, differs starkly from the other two churches. It was built in 1789 and never actually intended to be a mission. Instead, this was originally the fort chapel and blends the Euro-style architecture of arches and columns with the white adobe box-like structures common in West Texas and New Mexico. The Presidio was named after San Elceario, the French patron saint of soldiers, and eventually became known as San Elizario. Like the other two churches, the original chapel was destroyed in the flood of 1829. The present-day chapel was completed in 1882, and of the three missions you’ll visit, this is the only one with a plaza.

As you walk inside, you’ll immediately notice that it is much larger than the other two and has beautiful stained-glass windows. Damaged by a fire in 1935, a turquoise and gold pressed-tine ceiling covers the original ceiling beams, and decorative posts now encapsulate the original plain wood columns. The Stations of the Cross are more ornate here than at the other two churches and date back to around 1918. After exploring the chapel, relax in the shade of the trees lining the plaza and then explore the Presidio. The streets are designed in a formal rectangular grid pattern common in Spanish colonial town planning. There are 17 sites with markers, so you can learn more about each building.

The San Elizario Historic District is the site where the first horses entered the American Southwest. It’s also the oldest Main Street in the United States, a rest area for the Butterfield Stagecoach Route and the site of the Salt War riot of 1877, dubbed the biggest gunfight of the Old West. San Elizario stakes claim to have celebrated the first Thanksgiving in the United States when Don Juan de Oñate asked friars to say a Mass of Thanksgiving as he formally claimed the land for the King of Spain, 23 years before the pilgrims set sail from England.

Experience more of the region’s past through its galleries, museums, and cuisine. 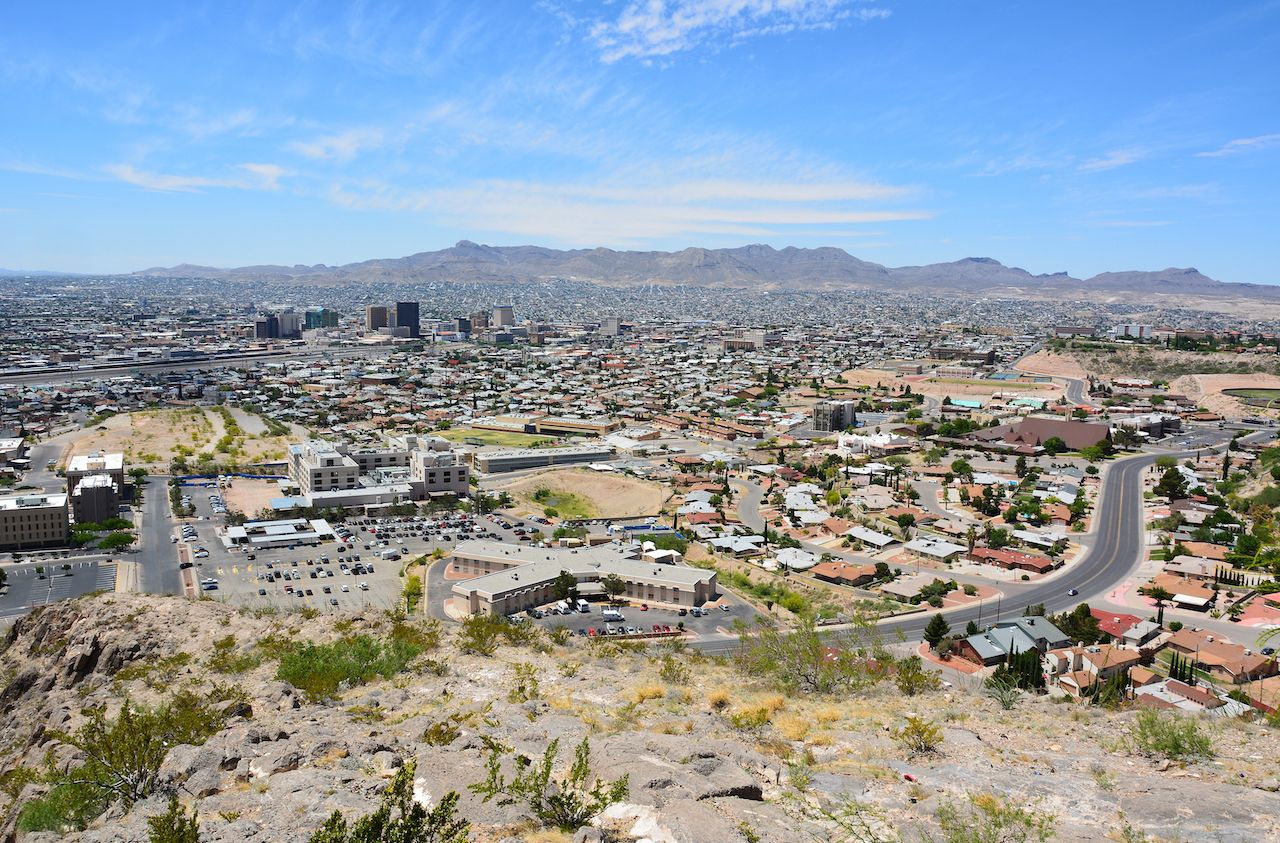 As you walk around San Elizario Presidio, dip in and out of the many galleries located within two of the historic buildings. For religious relics, shop in the gift shops of Ysleta and Socorro Missions. Your first port of call beyond the missions themselves should be Escamilla Fine Art Gallery and Studio, which showcases the artistic work of Alberto Escamilla. There’s a chicken crossing sign by Saldana Gallery and Studio, so watch for chickens as you cross the street towards it. Learn more about the history of San Elizario in the Los Portales Museum. If you’re into western action heroes, stop by the Old El Paso County Jail, dating back to 1821. According to legend, famed outlaw Billy the Kid freed Melquiades Segura from here in 1876, the only man to escape the jail. Coincidentally, this event also marked the only time Billy the Kid broke into a jail.

The region’s Southwest cuisine is on display at Bowie Bakery, in between Socorro Mission and Ysleta Mission. Pick out a cuello (doughnut-shaped pastry), cuerno (croissant), or sweet empanada to satisfy your sweet tooth. There are also options for authentic Mexican food along Socorro, of which a gordita and lemonade from Celia’s is the best for a quick bite, though locals in San Elizario say Sofia’s — on Glorietta Street — has the best tostadas and overstuffed corn gorditas around. Strike up a conversation with other diners and you’re likely to learn even more about the heritage and the history of faith on the frontier along the El Paso Mission Trail.

OutdoorFor a Mountain Vacation Where You Can Actually Relax, Head To Southern New Mexico
Tagged
Art + Architecture Religion Insider Guides
What did you think of this story?
Meh
Good
Awesome

8 Experiences To Have in El Paso Before You Die