As a country that’s part of the island nation of the UK, England is well known for its coastline, which ranges in topography from towering, chalky white cliffs to sweeping, wind-blown grasslands leading down to white sandy beaches. With such an idyllic shoreline to explore and admire, walking and rambling have become some of the top outdoor pursuits around the country. That, plus England’s right-of-way laws that enable access to the beaches and outdoor areas, means that the entire countryside is rife with long-distance paths, including one that stretches along the entirety of its coast and is on the cusp of being finished: the England Coast Path. It will be the longest coastal path in the world and is set to be completed at the end of this year and officially launched in early 2021.

How long is it? 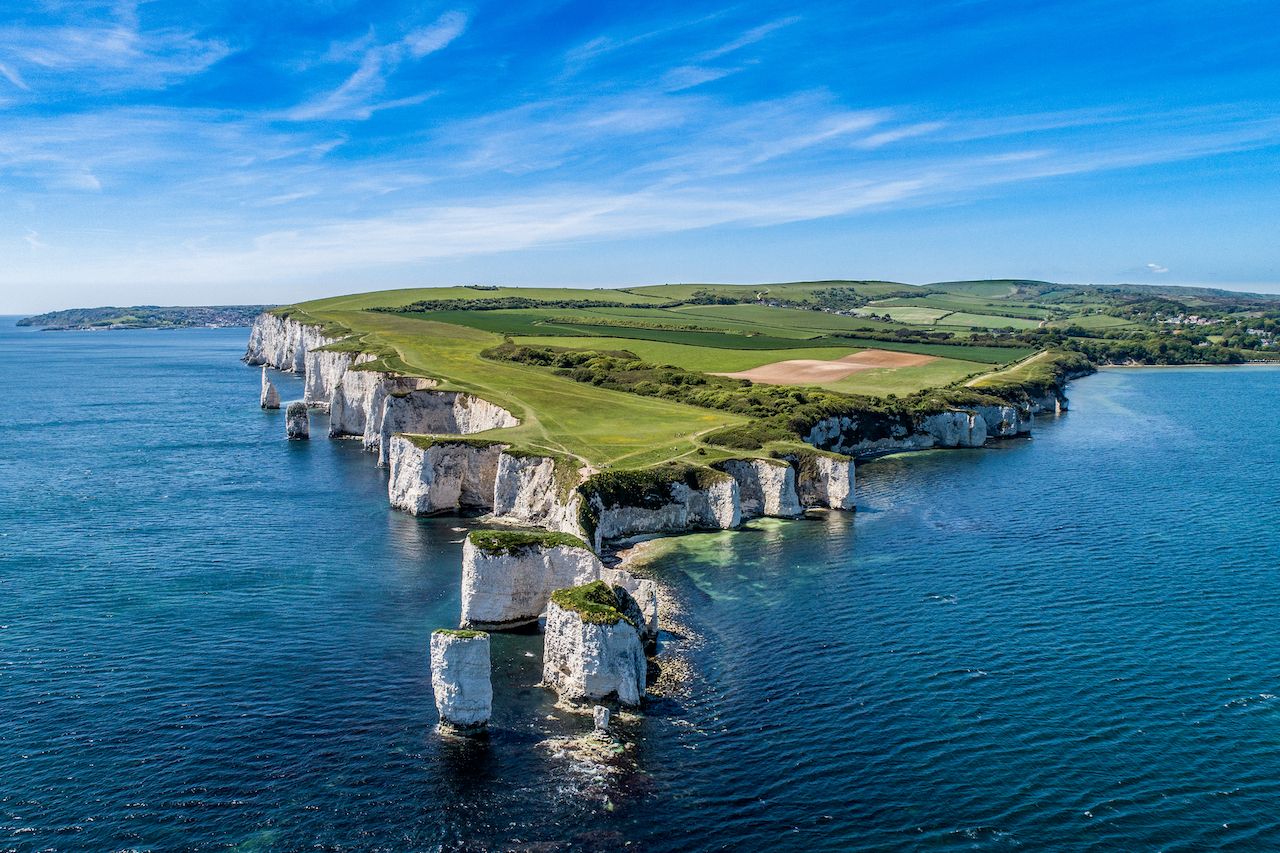 The England Coast Path will be the longest marked and managed coastal pathway in the world, clocking in at 2,795 miles. While the official route will be unveiled early next year, at the moment large sections of the path have been completed and open to the public for some time. Some of these trails have existed and been used for years, but the Coast Path will officially link and connect all the preexisting routes, as well as improving signage and the quality of the paths and walkways to ensure safety and accessibility. Not only will walkers and hikers be able to enjoy nature, but they can also pass by and explore historic towns, villages, castles, lighthouses, and ruins.

The Coast Path is being completed by Natural England, a part of the UK government tasked with protecting and promoting England’s natural.

How long would it take to do the Coast Path in its entirety?

Although some people have walked the entire coastline before, it’s never been done on a network of maintained paths, which would improve time by offering easier navigation and movement, as well as ease of access. So it’s hard to say with certainty how long it would take to walk the official Coast Path until someone tries it. But estimates say around seven to 10 months, depending on weather and physical stamina.

But the good news is that, if you can’t set aside half a year or more to walk the whole coastline, you can tackle smaller sections one at a time.

What sections are open?

There are hundreds of trails, both short and long, that already exist along sections of the coast, so if there’s a particular area you’re interested in exploring, check that region’s tourist website or section of the National Trails website to confirm if there are any trails or paths already open.

The North West, North East, South East, and South West regions are already listed on the National Trails English Coast Path website, with the option to click on each region and find out more about paths in each area.

There are also 11 existing coastal trails that will be linked into the overall Coast Path that cover nearly 1,500 miles of coastline. These include the 630-mile long South West Coast Path, the Cumbria Coastal Way (185 miles), Saxon Shore Way (163 miles), and many other smaller paths ranging from 20 to 60 miles in length. So there’s already a fair amount of options available to discover parts of England’s shoreline.

Where is the starting point of the Coast Path?

Theoretically, anywhere! Depending on where your travels in Britain take you, you could just hop onto the path and start walking. However, if you intend to do the whole Path and don’t want to be retracing your steps, it makes sense to start from either the South West border with Wales or in the North East from the town of Berwick-upon-Tweed near the Scottish Border.

What are the highlights? 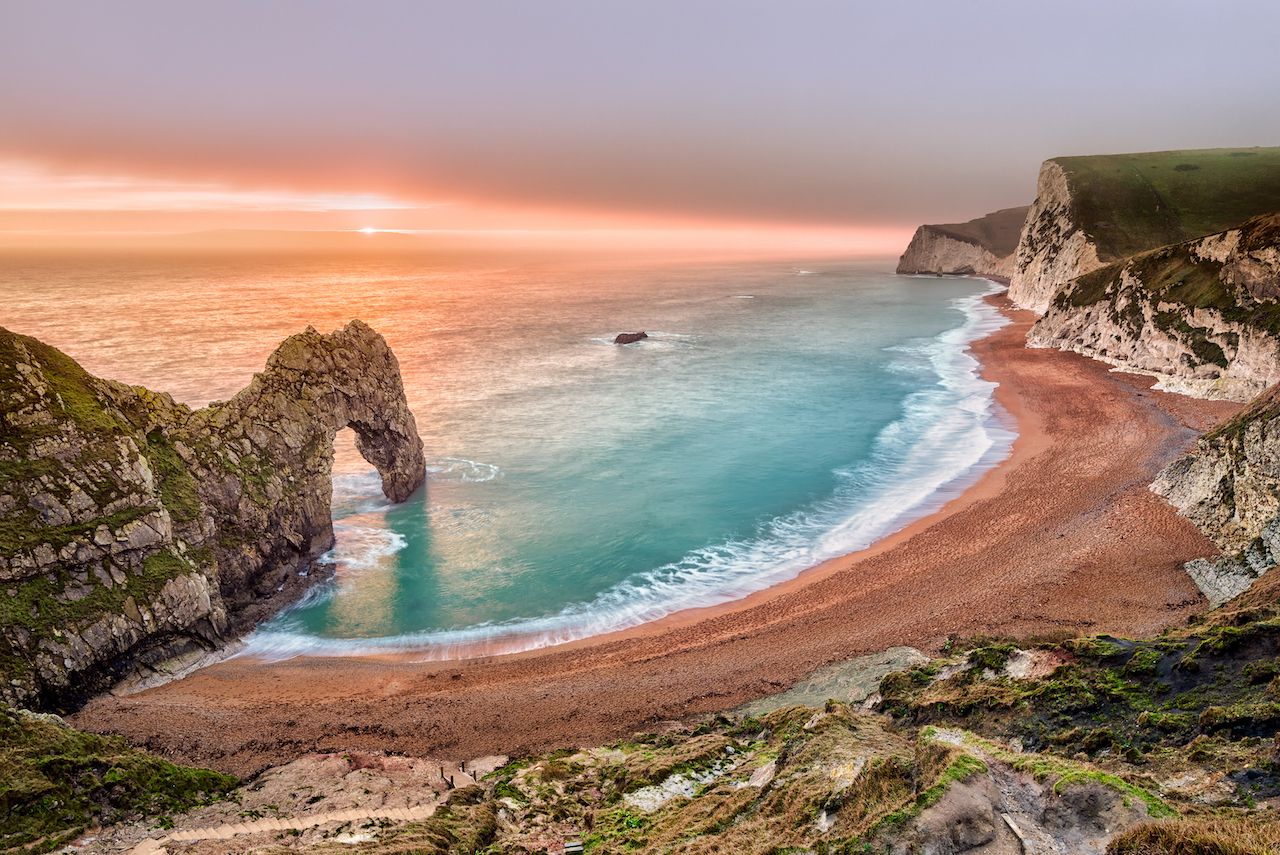 With its dramatic ridges and rock formations, the World Heritage Jurassic Coast in southern England is a destination worth discovering on foot. Stretching about 95 miles along the shores of the English Channel from Studland Bay to Exmouth, walkers will encounter epic sea cliffs like those at West Bay and wind-and-water-sculpted formations like the famous Durdle Door. The rocks along this part of the coast are a remarkable geological record of the Mesozoic Era, which ran from 250 to 65 million years ago, so finding fossils and other evidence of Earth’s history is commonplace. For walkers who enjoy city life, you’ll be able to pass through and spend time in legendary cities like Liverpool, the seaside resort of Blackpool, and Brighton, which is well-known for its beach and Palace Pier. 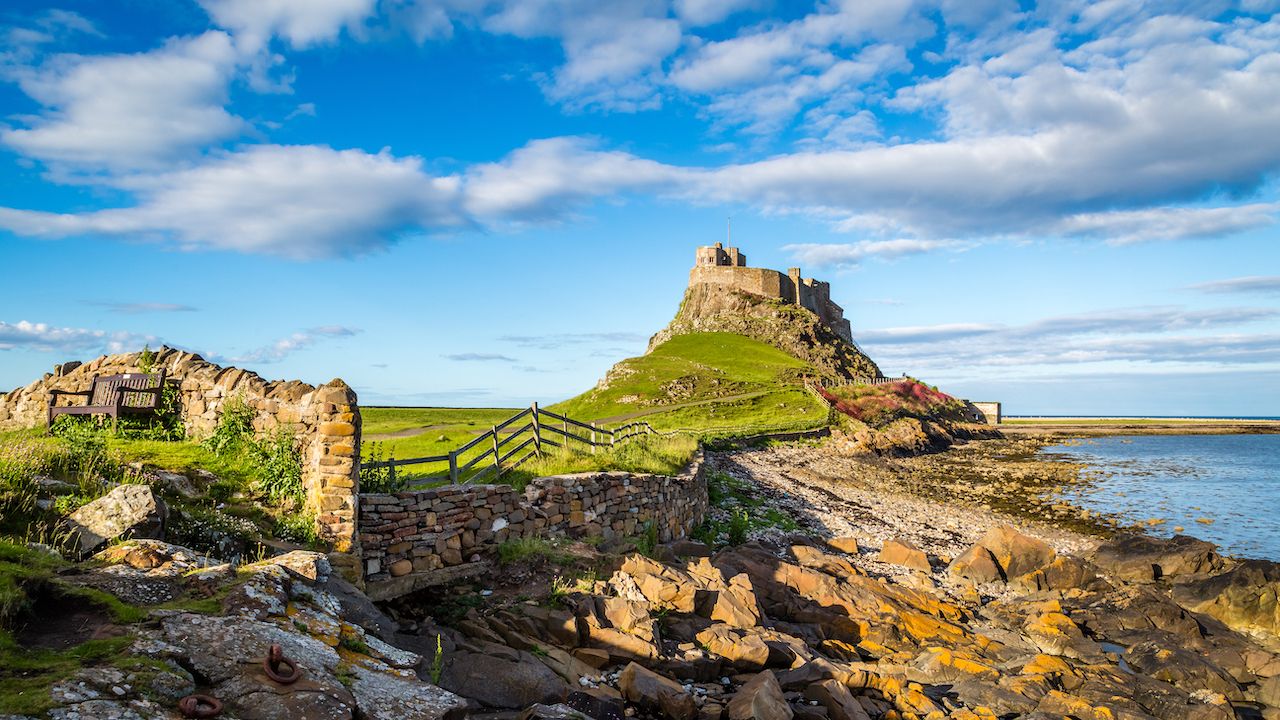 All along the coast but especially in the North East, you’ll also have the chance to pass through small towns and fishing villages, like the incredibly charming Robin Hood’s Bay, a tiny enclave of stone cottages and houses nestled against the shore. You’ll also get to see historic castle ruins like the historic Bamburgh Castle, located in Northumberland, where the kings of the region once reigned. 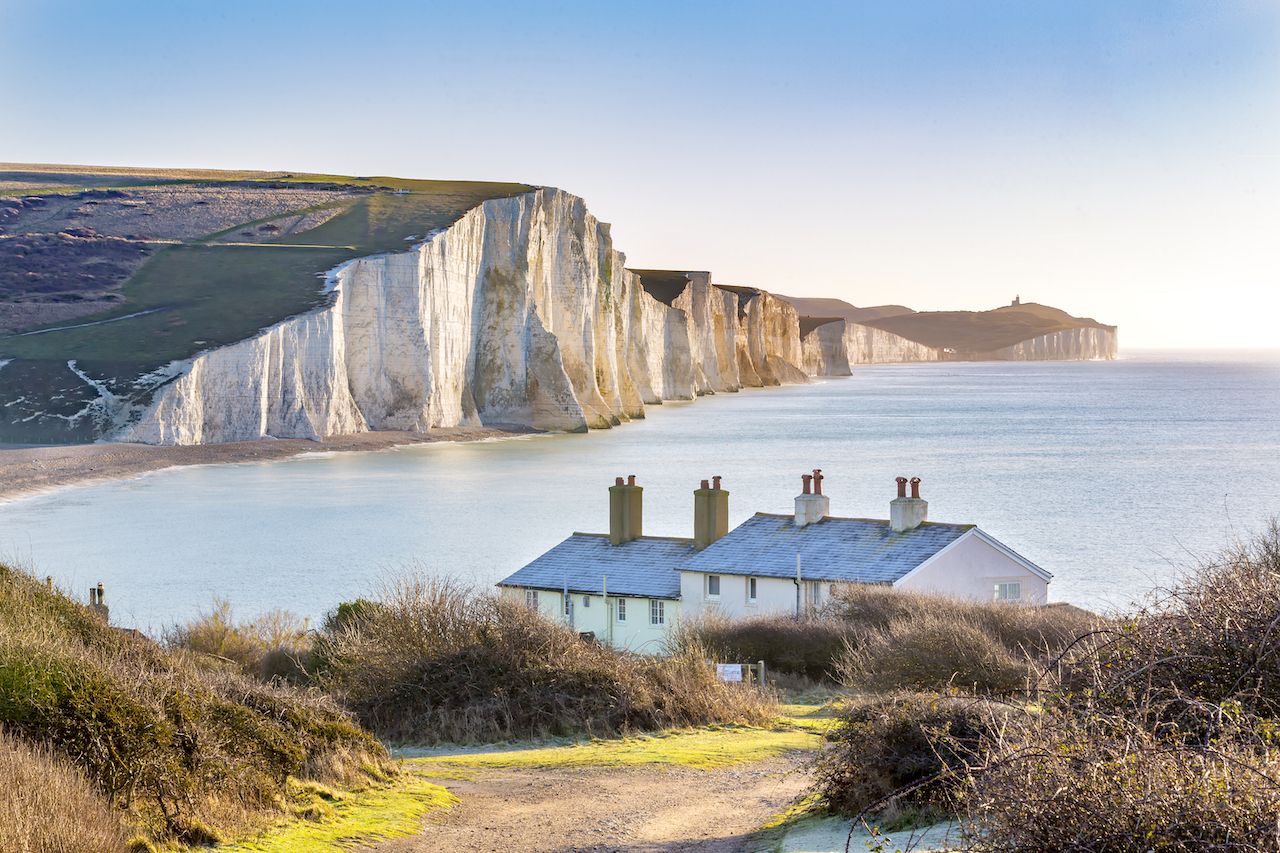 Finally, the northwest portion of the Coast Path is and will be definitely a popular part of the route, as it passes by some of England’s most famous natural landmarks and cities, including the Lakes District, Liverpool, and Black Pool.

What kind of gear would you need to bring?

As with any long-distance, multi-day hike or trek, you’d need to bring backpacking gear like a waterproof daypack, good hiking shoes, a reusable water bottle, sunscreen, comfortable hiking pants and shirts, a sunhat, rain jacket, fleece, snacks and food for the trail, and, if you need them, hiking poles. Packing clothing layers that you can take off and put on as the weather demands is essential to your comfort and safety.

Waterproof clothing and gear is also a must; it is England and you are walking along the coast, after all.

Camping along the way in designated sites is, of course, also an option, but since the path also runs through towns and villages, you will routinely be back in civilization and can have the option to stay in hotels, hostels, or rentals if you’re not a big camping enthusiast.

When would be the best time of year to try out the Coast Path? 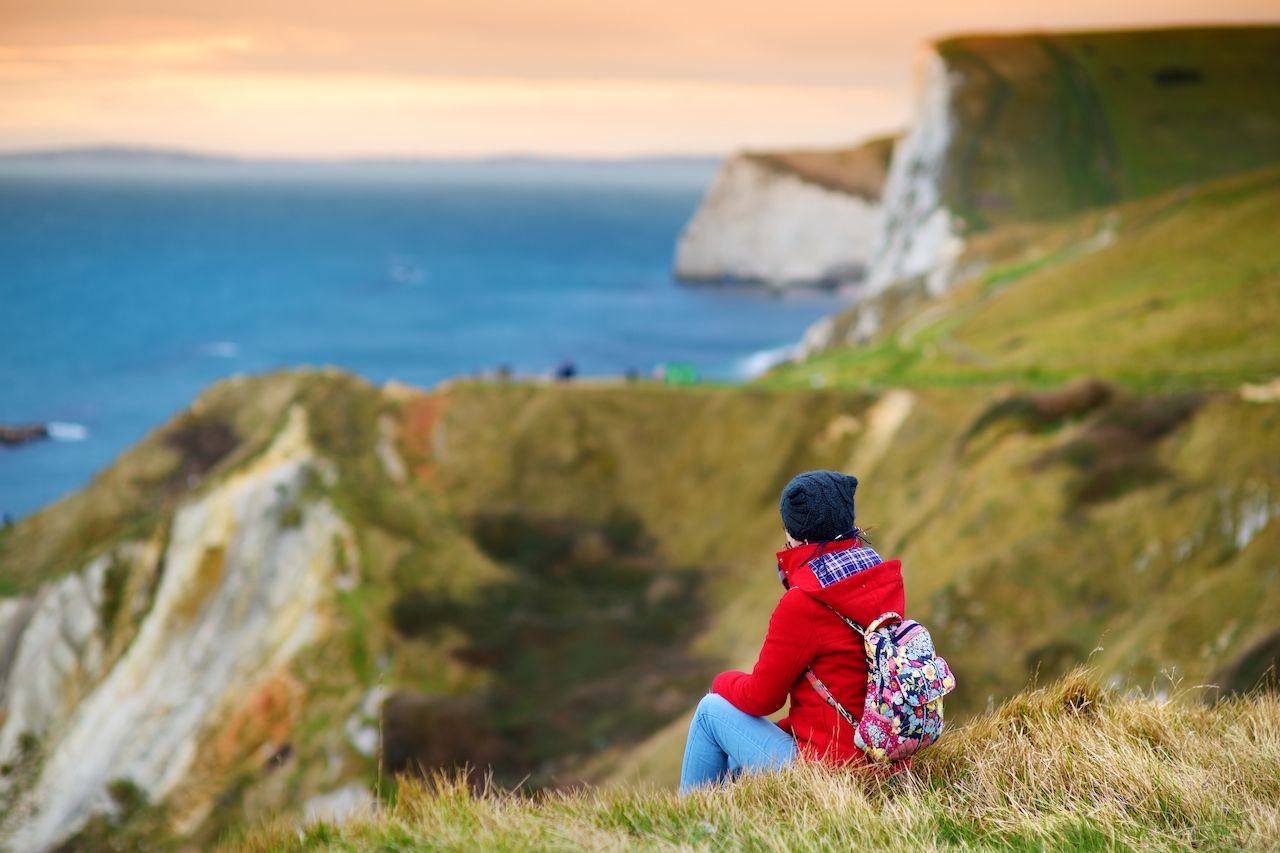 With its warm temperatures and fair weather, summer is the best time to plan to go hiking or walking in Britain. The weather is generally at its best, allowing you plenty of sunshine, warmth, and longer days to hike, and you’ll get to enjoy the British countryside in all its seasonal splendor. But even then, the weather is unreliable, so always pack for rain and storms.

If you were planning on trying to complete the entire Coast Path, you’d need to plan for at least half a year — starting in spring, hiking through summer, and aiming to complete the route in the fall would be best, as you’re avoiding the dreary and cold winter months when temperatures dip into the low 40s, and there’s even the possibility of snow. You’ll still encounter rain and storms, but you’ll also have the benefit of seeing flowers in the spring, summer greenery, and fall colors.

Due to COVID-19, will the route still open on schedule?

Since the Coast Path is supposed to be finished in late 2020 or early 2021, which should be far enough in the future that its launch and the “Year of the English Coast” rollout — which will include a roster of promotional events like beach clean-ups, art trails, and food events — can still happen according to schedule.

But with many non-essential work functions and projects now halted due to coronavirus, it’s possible there could be delays to construction and therefore a short delay in the path being launched. In the next few months, a clearer picture is sure to emerge, so check the official England Coast Path website or Visit Britain for updates and information.

HikingHow To Layer Clothing for Spring Hikes
Tagged
Backpacking Beaches and Islands Hiking Trip Planning England
What did you think of this story?
Meh
Good
Awesome