Puerto Rico’s rich blend of cultures influences the art, music, and cuisine on the island. Puerto Rico is where you’ll find many (many) Piña Coladas, and where you can visit a town with an identity tied to unusual ice cream flavors. And it doesn’t stop there. There are stories to be told across Puerto Rico’s food landscape. Few dishes, however, have as strong of a connection to Puerto Rico as mofongo.

Puerto Rico’s national dish is technically arroz con gandules (rice with pigeon peas), but residents are most proud of their signature dish, mofongo. Mofongo is a local favorite, and it’s typically made with green plantains fried and mashed together with oil, garlic, salt, and sometimes chicharrón (fried pork skin). The mash is usually served on a plate with chicken, shrimp, beef, or vegetables.

Mofongo is arguably Puerto Rico’s most important dish. Not only is it a favorite among locals, but it also represents the complex, often overlooked history of the island. Mofongo exemplifies the heart and soul of the country — different backgrounds coming together to create something uniquely Puerto Rican. No trip to the Island of Enchantment is complete without it.

Mofongo was created on the island through a blend of local and foreign influence. The Spanish began to colonize the island in the early 1500s, and brought slaves from West Africa. With the West African slaves came fufu, a dish native to Central and West Africa made with boiled root vegetables (usually yuca, plantains, or yams) which are pounded into balls of dough and served as a side to meat or stews.

Inhabitants on the island adopted and modified the fufu brought from West Africa. They used a mortar and pestle from the indigenous Taino people called a pilón to mash together the ingredients, which were then fried rather than boiled. Additionally, a Spanish sauce base called sofrito, made with onions, garlic, and peppers, was added. From these three cultures, mofongo was born.

How mofongo is served 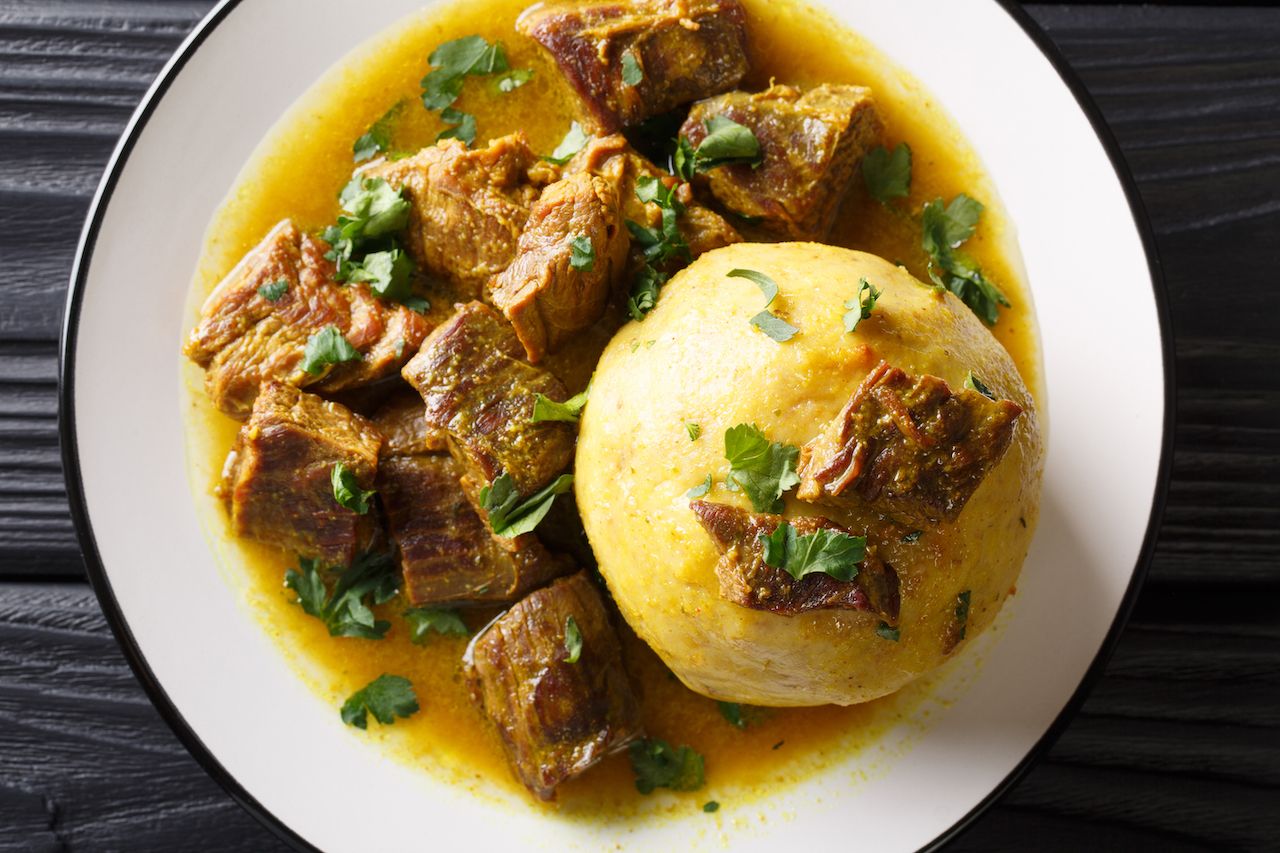 The most basic version of mofongo is made with mashed fried plantains and is served as a side dish to some form of protein, similar to the way fufu is traditionally eaten. Mofongo can also be made with yuca or breadfruit rather than green plantains. The most common way to eat mofongo is to fill it with meat, seafood, or vegetables. Filled mofongo is called mofongo relleno, and this is how it’s most often presented on a menu.

The best mofongo in San Juan 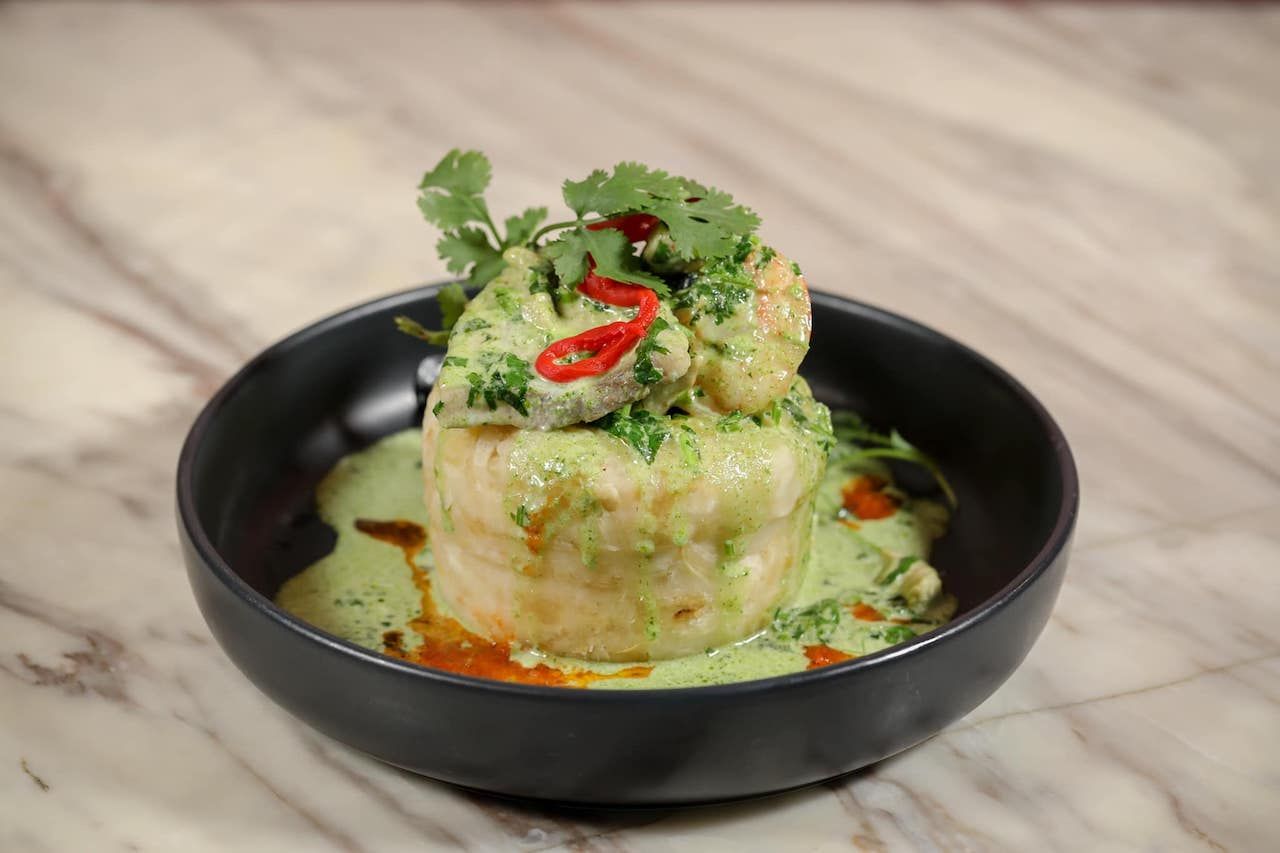 Mofongo is a staple of Puerto Rican cuisine and is easy to find on the island, especially in the capital of San Juan. The best place to get it is at a restaurant that serves cocina criolla, or Creole food. The term refers to traditional Puerto Rican cuisine, and restaurants advertised as criolla are typically mom-and-pop diners with a family run, home-cooking kind of feel.

Casita Miramar: A restaurant that’s a short drive from the historic city center in San Juan’s Miramar district. The space resembles a large, beautiful house and has an upscale vibe. The food is a bit more expensive here than most traditional Puerto Rican establishments, but the heaping portions, a free appetizer of plantain soup, and complimentary all-you-can-eat bacalaito (cod fritters) make it worth the price. Casita Miramar’s mofongo is filled with shrimp and is made with yuca rather than green plantains.

Cafe Manolin: Located in the center of Old San Juan, Cafe Manolin has an atmosphere reminiscent of an old-school American diner. It serves mofongo as a side dish made from either green plantains or yuca, or you can order mofongo relleno filled with chicken or shrimp. The mofongo at Cafe Manolin is particularly delicious if you love garlic, as there’s quite a lot of it in the mofongo mash.

Ajo Del Pais: Another popular option in the heart of Old San Juan. This restaurant is known for both its attentive service and the quality of its mofongo. You can find a much wider variety of mofongo relleno here, including mofongo filled with conch, shrimp, skirt steak, mahi-mahi, or octopus.

Los Pinos Café: Just down the street from Casita Miramar you’ll find Los Pinos Café, which is open 24 hours a day, seven days a week. It’s the best place to fulfill a late-night craving or end a night of drinking in San Juan. Los Pinos has mofongo relleno with fillings ranging from chicken to octopus to crab. There’s also a trifongo made with yuca, green plantains, and yellow plantains.

Spirits + CocktailsThe 8 Piña Coladas You Need To Try in Its Hometown: San Juan, Puerto Rico
Tagged
Food + Drink Puerto Rico
What did you think of this story?
Meh
Good
Awesome

Why Puerto Rico Is the Perfect Place To Learn To Kitesurf

Puerto Rico Will Reopen To International Tourists on July 15

Puerto Rico and JetBlue Are Giving Away Free Island Vacations