In 1908, Ikua Purdy traveled from his home on Hawaii’s namesake isle, Hawaii Island, to the Frontier Days Rodeo in Cheyenne, Wyoming. He and his fellow paniolos, or Hawaiian cowboys, stood out with their brightly hued hat bands and unusual saddles. But Purdy made more of an impression when he roped a steer in 56 seconds, setting a new record.

Purdy showed the world that Hawaiian cowboys were not just skilled cattlemen but that they had traditions and techniques of their own.

“Ikua Purdy had gone to Cheyenne and won the world roping championship. The number one cowboy in the United States was a paniolo,” says Raymond Foat, who until last year ran the dinner events at Kahua Ranch, a working ranch on the Island of Hawaii’s Waimea region. “The story intrigued me tremendously. It was a wonderful story to tell.”

That story goes back to King Kamehameha, the young nobleman who united the Hawaiian islands under his ruler. In the early 1790s, Captain George Vancouver gave Kamehameha a couple of bulls and a few cows; accounts vary, but the number of cattle gifted was at least five. The king then issued a “kapu,” or prohibition, on the killing of these animals.

By the time a 19-year-old sailor from Massachusetts named John Palmer Parker abandoned his ship and ended up on the Big Island’s west coast in 1809, the island was becoming overrun with cattle, which were destroying the local plantlife. Although Parker briefly left the islands for China in 1812, he returned in 1815 bearing a newly made musket.

King Kamehameha gave Parker permission to shoot the ever-spreading cattle, which Parker did — soon selling salted beef and other beef products. Parker also learned Hawaiian, married a granddaughter of King Kamehameha, and had three children. But Parker was trained as a sailor, not a herder, and the cows were still running wild.

It wasn’t until 1832 that Kamehameha sent for help in herding the cattle from California, which, like Hawaii, was not yet a part of the US. The assistance came in the form of three Spanish-Mexican vaqueros, as cowboys are called in Spanish, who wore ponchos, wielded lariats with astonishing skill, and taught Hawaiians how to round up and tame the wild bulls and cows.

“So the students of the vaqueros were adult men and women who soon learned the advantage of combining a horse lariat and saddle with a dally horn,” Justina Wood, manager of the Paniolo Preservation Society, tells us via email. She says this greatly helped their ability to manage and reduce the overpopulation of wild cattle.

These men spoke Spanish, and it’s from there that the term “paniolo” emerged.

“The Hawaiian people in honor of these gentlemen from old California gave them the name paniolo or paniola as a Hawaiian dialect to speak the word español,” Wood says.

Their descendants are still proudly called paniolo today. You can find them throughout the Hawaiian archipelago, but most prominently on the Big Island. Still, they remain out of sight for many Hawaiian visitors.

In 2008, locals did celebrate a centennial to commemorate the success of the three paniolos at the 1908 Cheyenne rodeo — beyond Purdy’s top prize, his fellow paniolo earned third and sixth place. Foat, of the Kahua Ranch program, was among those who also accompanied a group of paniolo to Cheyenne that same year, part of his own effort to teach the world about the paniolo.

Foat had arrived in Hawaii in 1957, before it was a US state. What was by then Parker Ranch took up a huge amount of land, at one time covering nearly half of the Island of Hawaii. Foat says he was surprised that such a major part of the island, the heritage of its Hawaiian cowboys, was unknown to those outside the ranching world.

“It was something I felt,” says Foat. “The Hawaiian people and the visitors needed to know about that wonderful history and its champion [Ikua Purdy].”

Beyond the history, says the Paniolo Preservation Society’s Wood, the paniolo also helped preserve the Hawaiian language itself — as even those who were not Native Hawaiians rode horses and herded cattle learned to speak it.

Although the pandemic put an end to the Kahua Ranch evening programs, there are several ways for visitors to learn about and appreciate the paniolo culture. 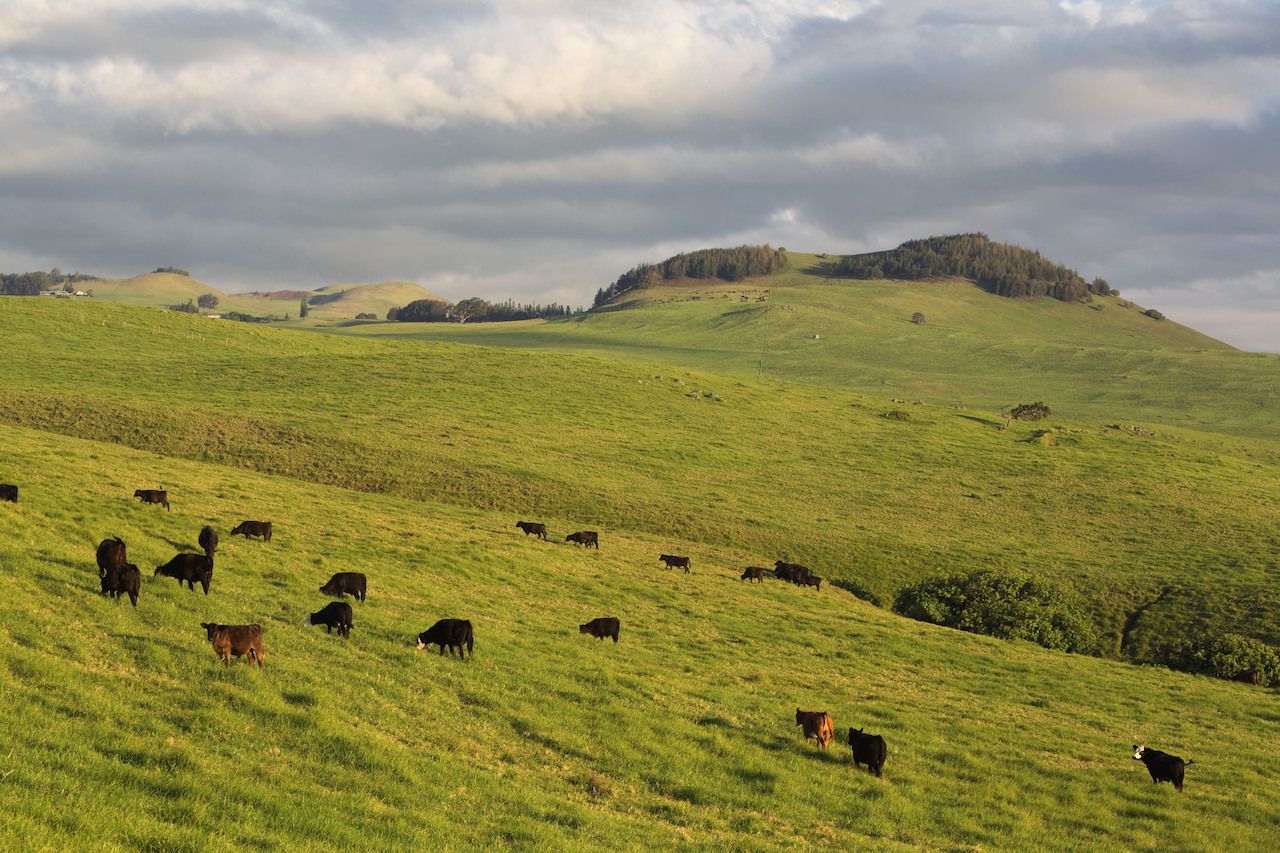 The most obvious way is to explore the area, which has its own lovely climate and topography. On the island’s east side there are rainforests and Hilo, one of the rainiest cities in the world. Due west you have an “arid desert,” says Foat. Due north, however, Waipio Valley near the coast and Waimea, inland at elevations of 3000 to 4000 feet, have weather patterns all their own.

“That part of the island is absolutely magnificent, from Waipi’o Valley to Waimea, and the cattle, and the rolling hills,” says Foat. Even the drive along route 240 toward the Waipio Valley will offer up worthy vistas.

Ride horseback with a view 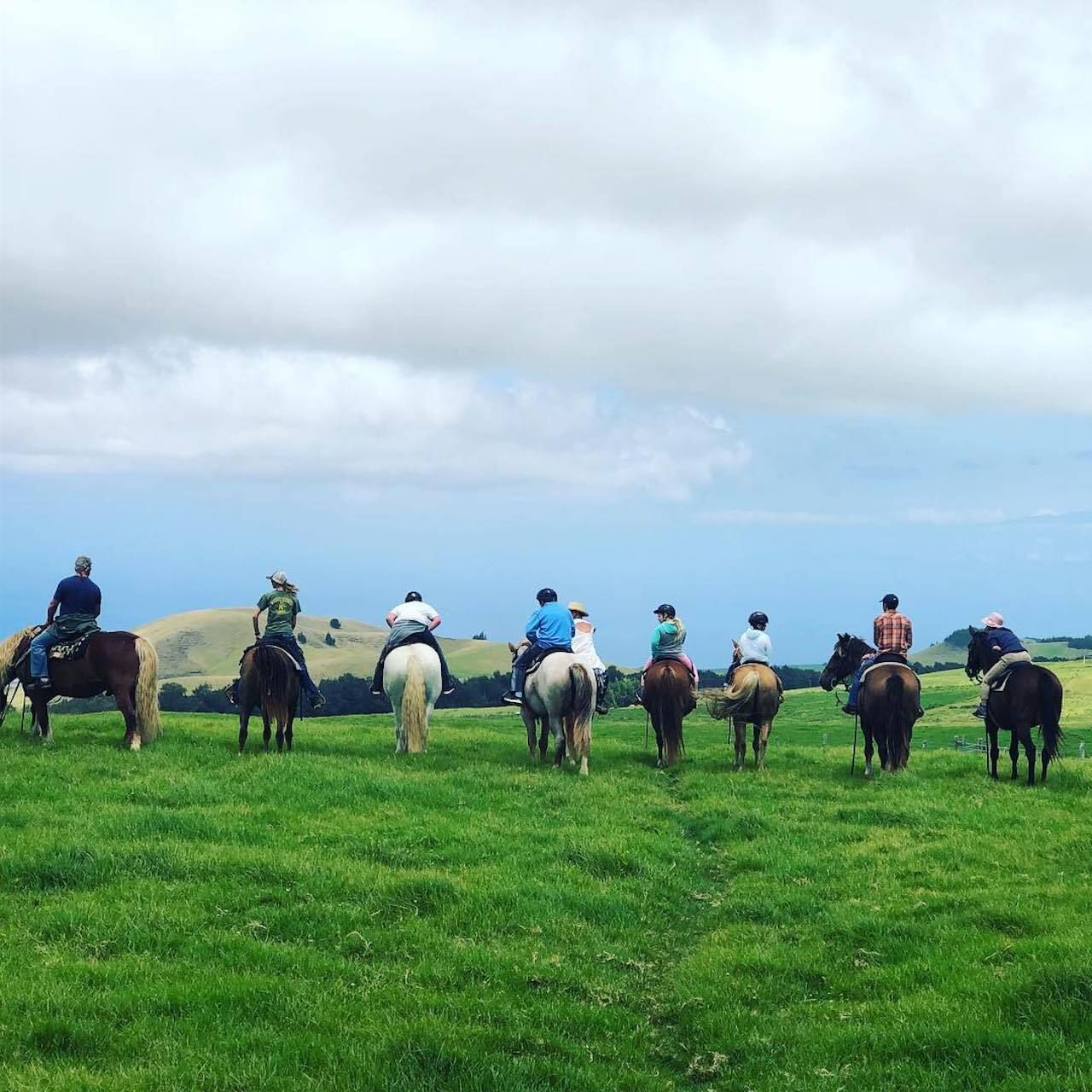 Wood recommends savoring the best of what being a paniolo means for those who live in these parts. She suggests visitors ride “horseback high in our verdant mountains and enjoy the most beautiful panorama in God’s given earth!”

You’ll find several horse-riding options in Waimea and the Waipi’o Valley — one of the many adventurous ways to explore the Big Island. Paniolo Adventures offers 2.5-hour rides for $99 and 1.5-hour sunset rides for $89. There’s a shorter 1.5-hour tour of the ranch or a longer 2.5-hour tour of the Waipi’o Valley — which is $114 for adults. Na‘alapa Stables, located on a 12,000-acre working cattle ranch in Kohala, is another option.

If you aren’t much of a horse rider, or want to get out and see the scenery another way, you could also traverse the upcountry on a guided mountain bike tour. 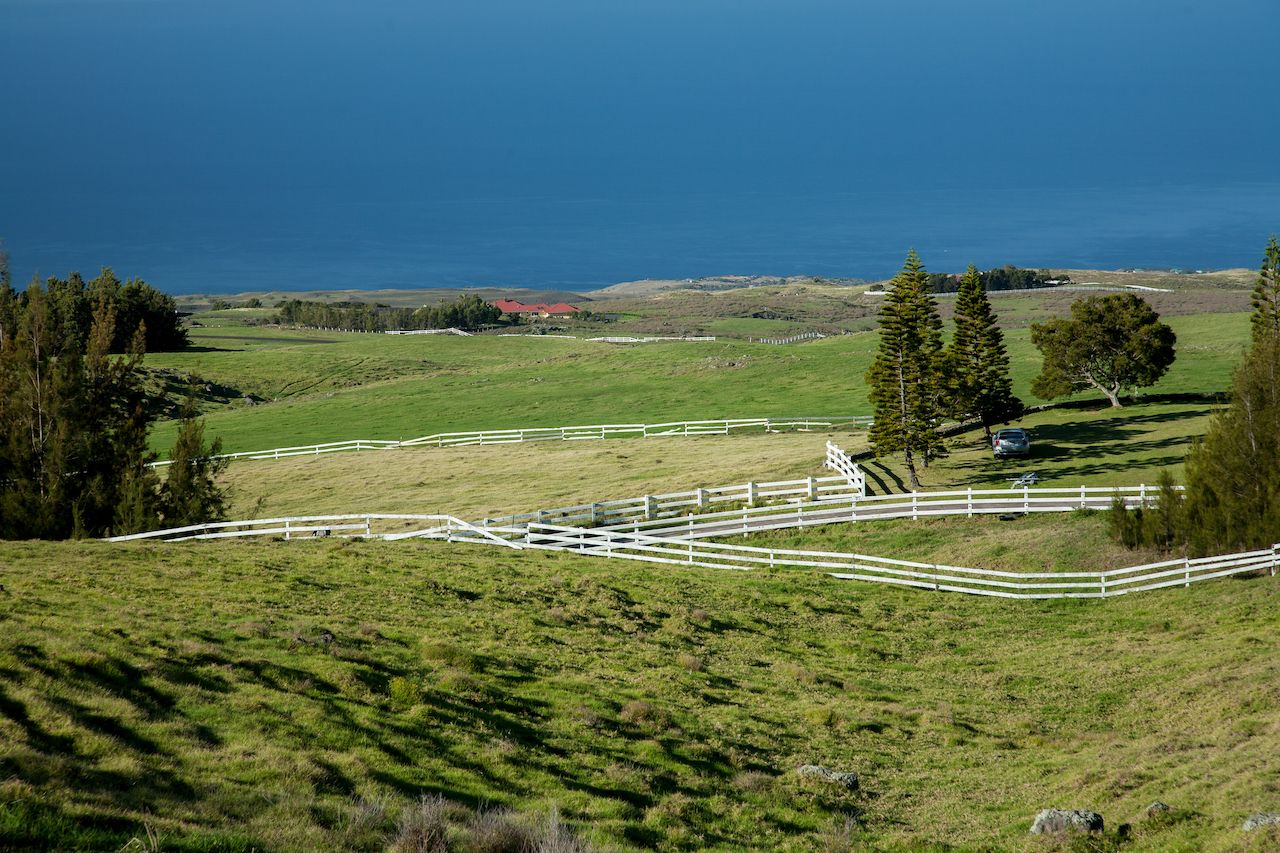 At the center of the story of paniolo culture is Parker Ranch, which remains one of the largest ranches in the country. Parker Ranch is also one of the nation’s oldest ranches, predating those of Texas by more than three decades.

It’s also where the paniolo story began. In fact, among the two other paniolos who had traveled to Cheyenne in 1908 with Ikua Purdy — and also wowed onlookers with their rope-handling skills — was Jack Low, great-great-grandson of John Palmer Parker. Indeed, the Parker family became an integral part of the Hawaiian story, with John Palmer Parker’s grandson, Samuel Parker, who was three-quarters Native Hawaiian, serving as a foreign minister in Hawaii’s last royal government.

When the fifth-generation Parker heir passed away at a young age, his widow hired Alfred Wellington Carter to take over management of the ranch in 1899. A horse aficionado, Carter started raising steed — and they continue to be a part of the Parker Ranch heritage. Parker Ranch, which today covers closer to 140,000 acres than its peak of 500,000, remains in operation and is owned by a charitable trust.

Although free, self-guided tours of the ranch were suspended by COVID-19, we expect these to restart soon.

Run by the Paniolo Preservation Society, this small center is the best place to explore artifacts like the first saddles used by Hawaiian cowboys. These saddles differ significantly from those you might see in the US mainland — and their basic structure remains in use today.

“The modern Hawaiian cowboy… continues to use a prototype of the Mexican saddle that by the Hawaiian wood and rawhide worker enhanced the comfort of the seat and strengthened the dally horn into a taller unit,” says Wood. “The term Hawaiian tree refers to those saddles that have a minimum of rawhide and adorn with a very unique rawhide rigging called the awe awe.”

Go to a rodeo or watch a horse race 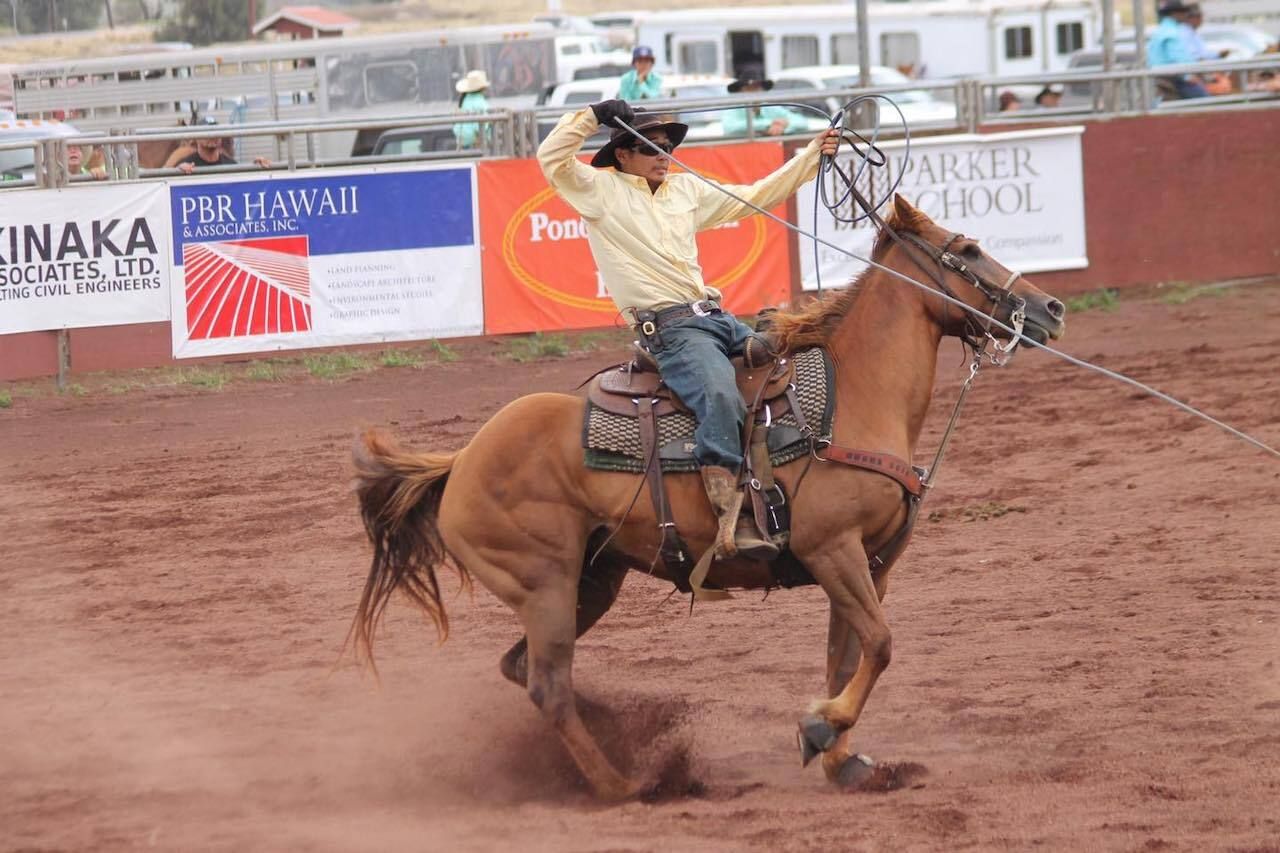 While February is typically a big month for rodeos, none took place in 2021 due to the pandemic. Hopefully, these will start up again. Even in years that Hawaiian cowboys have participated less in the rodeo world championships — which have since moved from Cheyenne to Las Vegas — rodeos remained a big part of life for Hawaiians in the upcountry.

“The ranchers compete amongst themselves,” says Foat. “It’s their own little Olympics, if you will. They take big pride in this, the ranchers all competing against each other.”

The hope is that by 2022, rodeos will again be a regular feature of paniolo life in Hawaii. In addition to rodeos, you could also watch a horse race. Parker Ranch has several steeds, and once provided horses to the US Cavalry. With the exception of 2020, it has held annual horse races on July Fourth, bringing together paniolos from other ranches for horse racing and traditional rodeo events.

Paniolo culture was also the source of its own ballads. As Parker Ranch points out, paniolo culture brought together Native Hawaiians, with Americans and the Chinese, Japanese, and Filippino immigrants who had worked the plantations, along with the Spanish-Mexican vaqueros who brought their cowherding skills. Paniolo are uniquely Hawaiian cowboys that arose out of a medley of cultures.

The song “Adios Ke Aloha” was written by Hawaiian prince Leleiohoku as a thank you to the vaqueros. One of those vaqueros’ descendants, Clyde “Kindy” Sproat, performed that and other Hawaiian cowboy songs, and received a National Heritage Fellowship for his work in preserving these folk tunes. You can listen to this song on Amazon, or watch Sproat perform other tunes online.