There’s a lot of talk about the patriarchy in the West. King Edwards have, historically, outnumbered Queen Elizabeths. Even the most recent editions of history textbooks are noticeably absent of American female presidents, and any printed before 1971 might make reference to Swiss suffragettes still fighting for a woman’s right to vote. The same is not true everywhere in the world. Matriarchal and matrilineal communities from Costa Rica to Kenya to the southwestern Pacific have entirely different standards, ones that put women at the forefront of society. These are seven of the most fascinating female-led societies. 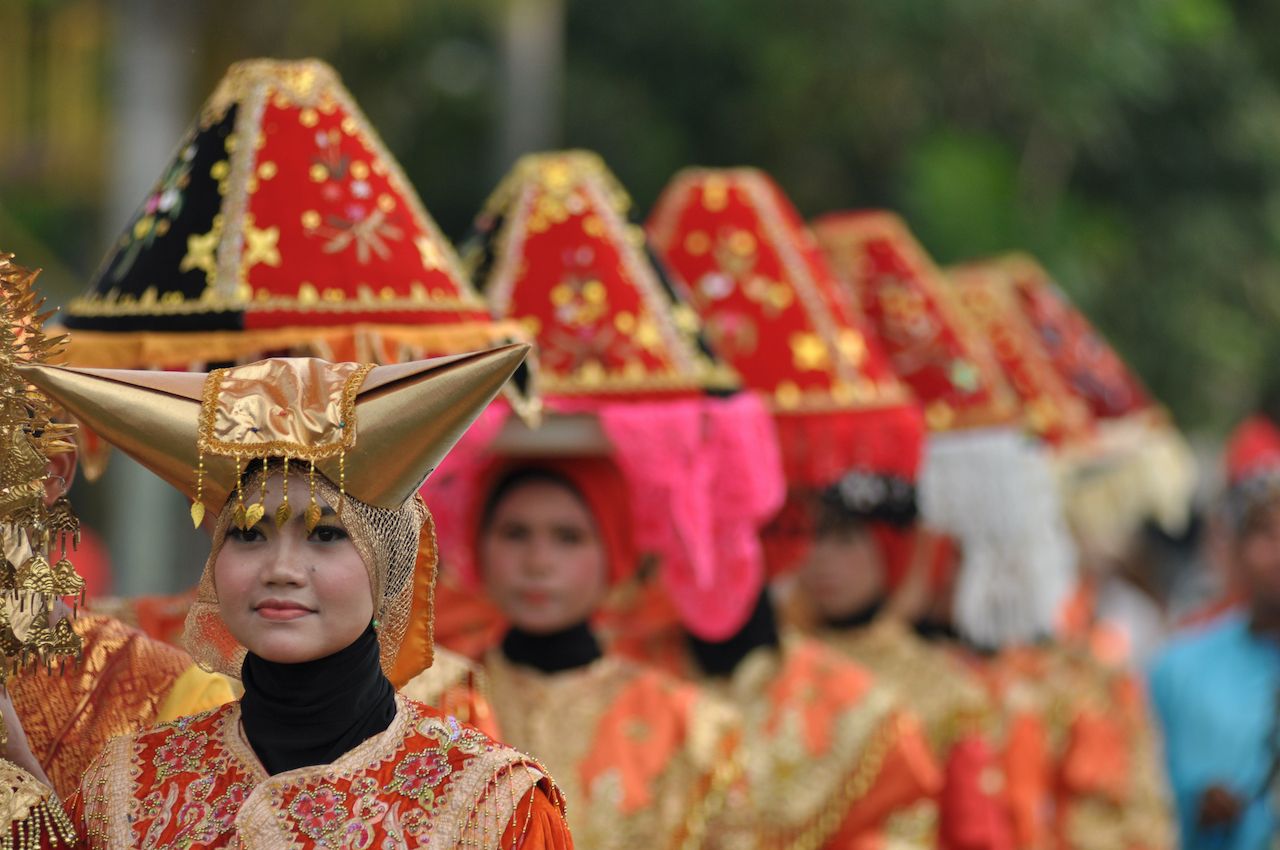 Indigenous to the highlands of western Sumatra, one of Indonesia’s largest islands, the Minangkabau are a matrilineal people and the island’s predominant ethnic group. The family unit centers on the mother: Children become part of a suku, or matrilineal clan, at birth. These clans own and bequeath land from generation to generation.

Within a village, each suku has a male leader, called a penghulu. These chiefs traditionally represented the village’s governing body, ideally four clans to a village, though the majority of today’s Minangkabau communities abide primarily by laws set by the state. Socially, family units within these suku are dictated by Minangkabau women: Married couples live with the wife’s family. Men come by only in the evenings, spending their days helping care for their own mothers and sisters. At the head of a household, called a rumah gadang, a matriarch is customarily in charge, often a grandmother. This role may also be filled by her eldest brother.

Though Muslim women are often viewed as oppressed by Westerners, the Minangkabau practice Islam while simultaneously raising up girls and respecting women’s views as equal to men’s, with no religious conflict. Social roles do differ between men and women, but both genders are equally valued, making Minangkabau society an example of what some have coined feminist Islam. 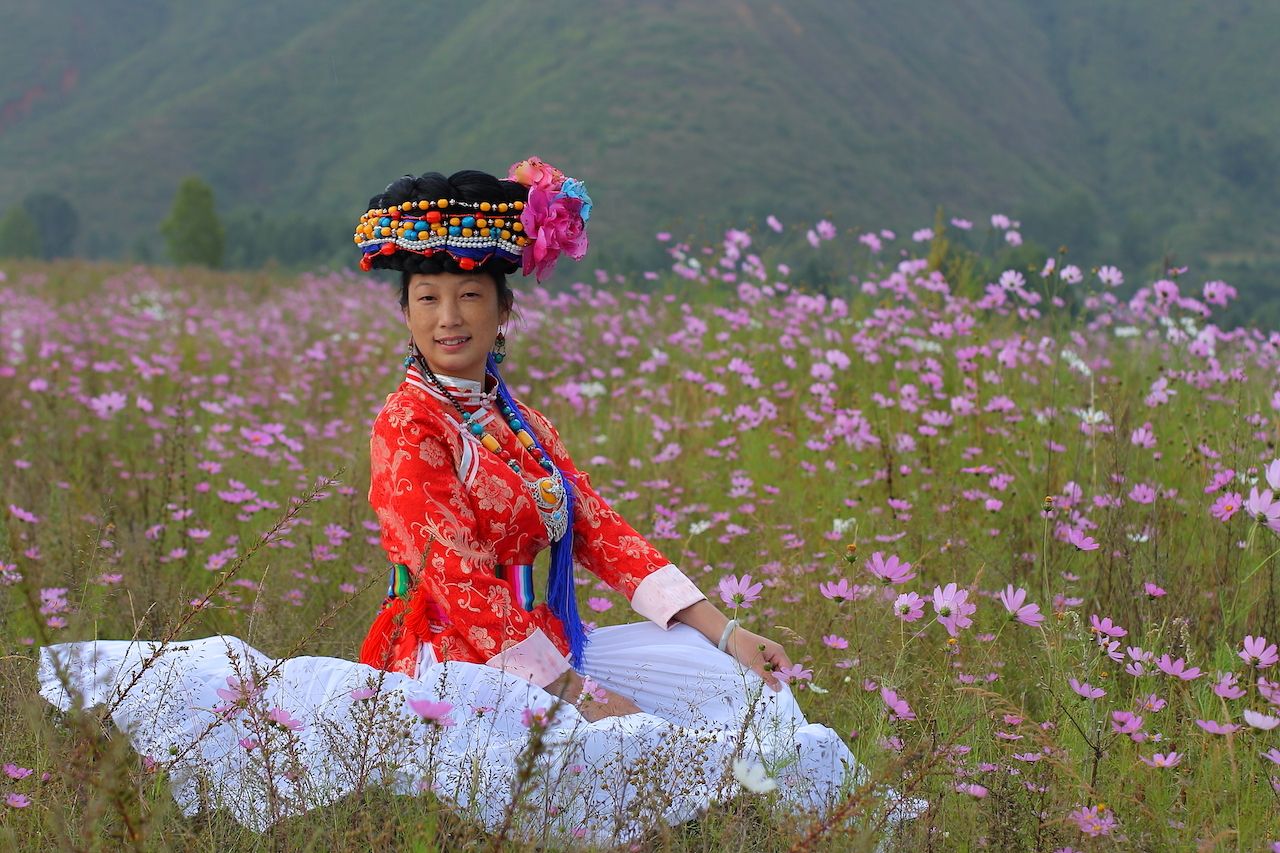 Mosuo women in China’s Yunnan and Sichuan provinces helm the country’s last matrilineal society. Property is passed down from mother to child, much as lineage is traced maternally. Yet Mosuo culture also incorporates matriarchal practices: Women head households, as well as make business decisions. They live separately from male Mosuo and customarily choose as many lovers as they like through “walking marriage,” a practice in which men visit their unofficial spouses only in the evenings. The rest of the time, Mosuo men live with their mothers and siblings though they’re expected to contribute financially to raising their children.

Mosuo traditions are changing in the modern world. Many women are choosing to get married in the Western sense of the word, although children continue to take their mother’s surnames. Some Mosuo villages are headed by matriarchs, as they have been historically, yet most officials today are men. Increased tourism, driven both by intriguing customs and the Lugo Lake scenery in which Mosuo villages are set, has also impacted society, exposing modern Mosuo to Western ideologies.

Costa Rica’s Bribri belong to one of the oldest matriarchal traditions in the world. Despite representing the country’s largest indigenous group, Bribri villages have remained separate from the rest of Costa Rica, both culturally and geographically. That their home is hidden away in the mountainous Talamanca region near the Panamanian border certainly helps.

Cacao is central to Bribri life, both as a source of income and spiritual significance. As lore has it, the cacao tree was once a woman before being transformed into flora by the god Sibú. Accordingly, one of the duties Bribri women are tasked with involves preparing ceremonial cacao for rituals, including dousing mother and newborn in a mixture made from water and cacao seeds after a baby is delivered. Cacao and banana sellers, Bribri women also earn much of their household income in addition to being domestic authorities. Men, on the other hand, have their roles, such as serving as shamans, or awas, and facilitating death rituals.

Bribri culture is at risk of being degraded, or disappearing, in the face of globalization. Recently, members of the indigenous communities have taken tourism into their own hands: In 2017, the Talamanca Bribri Tour Guide Association was officially recognized as Costa Rica’s first indigenous tour agency. 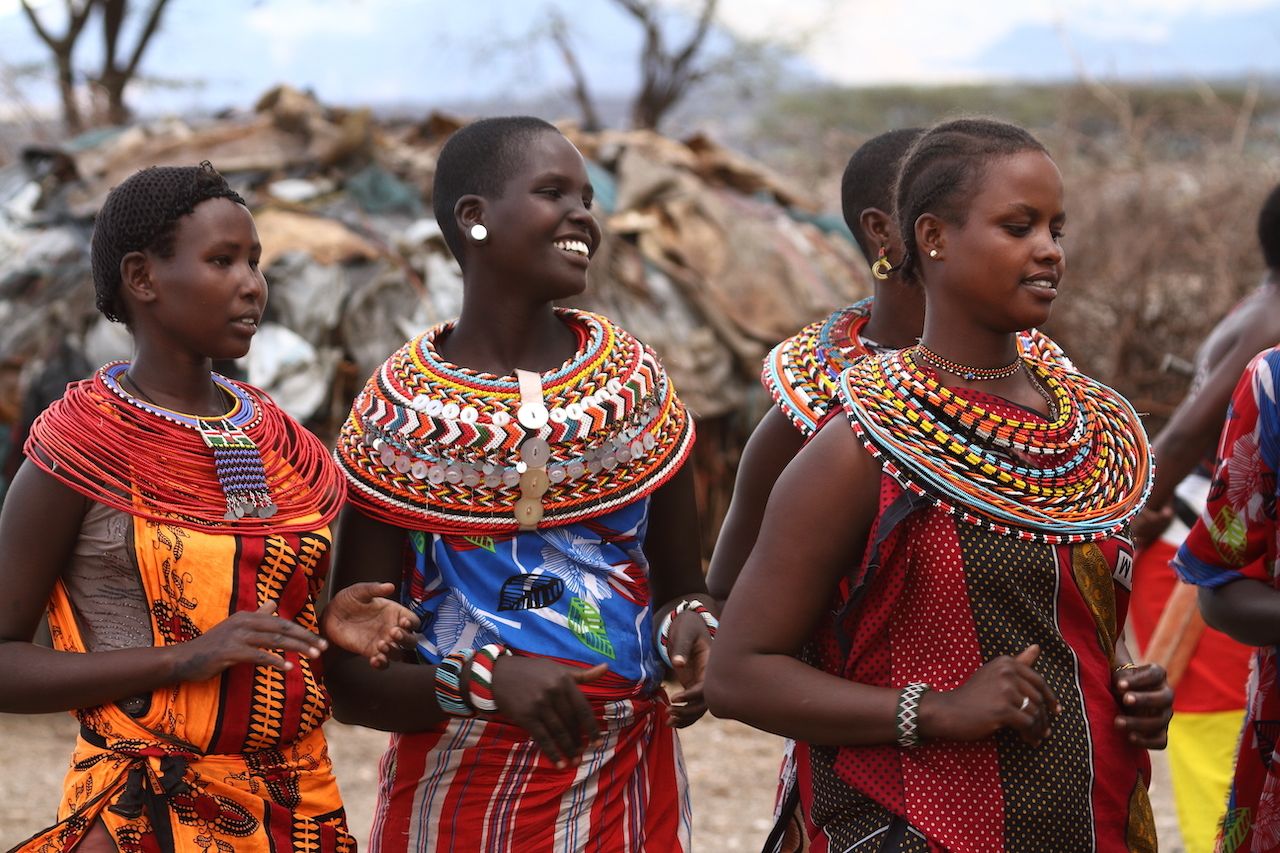 Women have ruled the Umoja village’s roost for as long as it has existed. Granted, that’s only been 30 years. An all-female society, the village was founded by Recebba Lolosoli, a Samburu woman from north-central Kenya who envisioned a safe space for women who have been the victims of domestic violence, as well as those escaping arranged marriages. Others came to seek asylum after being kicked out of their homes following instances of sexual abuse from men who are not their husbands, particularly members of the military, and were then deemed unclean. There are no male residents of Umoja, though men are permitted entry to the village.

Most villagers choose the empowering lifestyle as an alternative to Samburu customs, which treat women as inferior. Where most Samburu women are forbidden from owning land and property, for example, Umoja women earn money to maintain their village by welcoming tourists and selling jewelry.

According to the Nagovisi, one of three tribes from the island of South Bougainville just west of New Guinea, a lot can be determined by a person’s garden. Women tend to family gardens in Nagovisi culture, which also gives them social authority within and outside of their own families. Social practices, in general, revolve around the garden. While marriage is not strictly observed, men who help Nagovisi women with outdoor work are viewed as a sort of husband, partners who share a house with their unofficial wives. During spousal disagreements, or to indicate a breakup, men may refuse, or be refused, food from the garden.

Though both genders have leadership roles within the larger society, physically and ceremonially, that the Nagovisi are matrilineal means a lot. Gardens and other family property are passed from mother to daughter, who is then responsible for feeding her family and clan. Nagovisi women are also responsible for handling currency, represented by shells. Of the three tribes that inhabit South Bougainville, one other shares the custom of establishing matriclans, though neither gives women as much authority as the Nagovisi do. 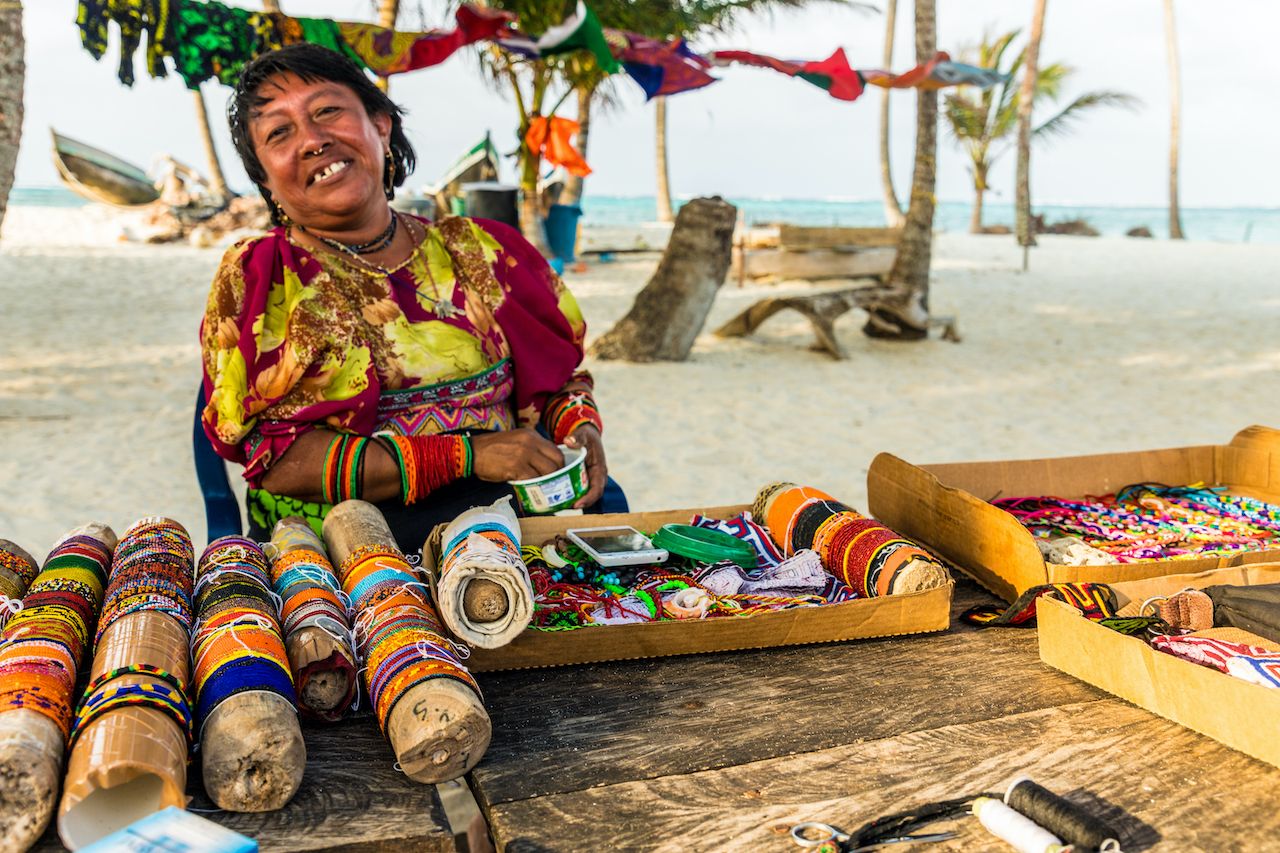 The Guna, or Kuna, people of Panama and Colombia operate independently of either state, politically and socially. Gender is conceived differently in the Guna Yala archipelago, where inhabitants acknowledge a third gender that is considered both male and female. Nonetheless, female-identified Guna women are prized in society, largely as breadwinners who sell embroidery and other handicrafts to tourists or run small shops and food stands.

Major celebrations in Guna culture revolve around the different stages of a woman’s life: her birth, coming of age, and wedding. When Guna men and women marry, there’s a ceremony in which the husband-to-be is playfully kidnapped, after which the couple settles down with the bride’s family. The wife and her family are then responsible for decision-making that affects Guna men, such as how much support he is able to lend his own blood relatives. Though women rarely hold political positions within society, a tentpole of a traditional matriarchy, as far as societal attitudes are concerned, it’s Guna women that are in charge. 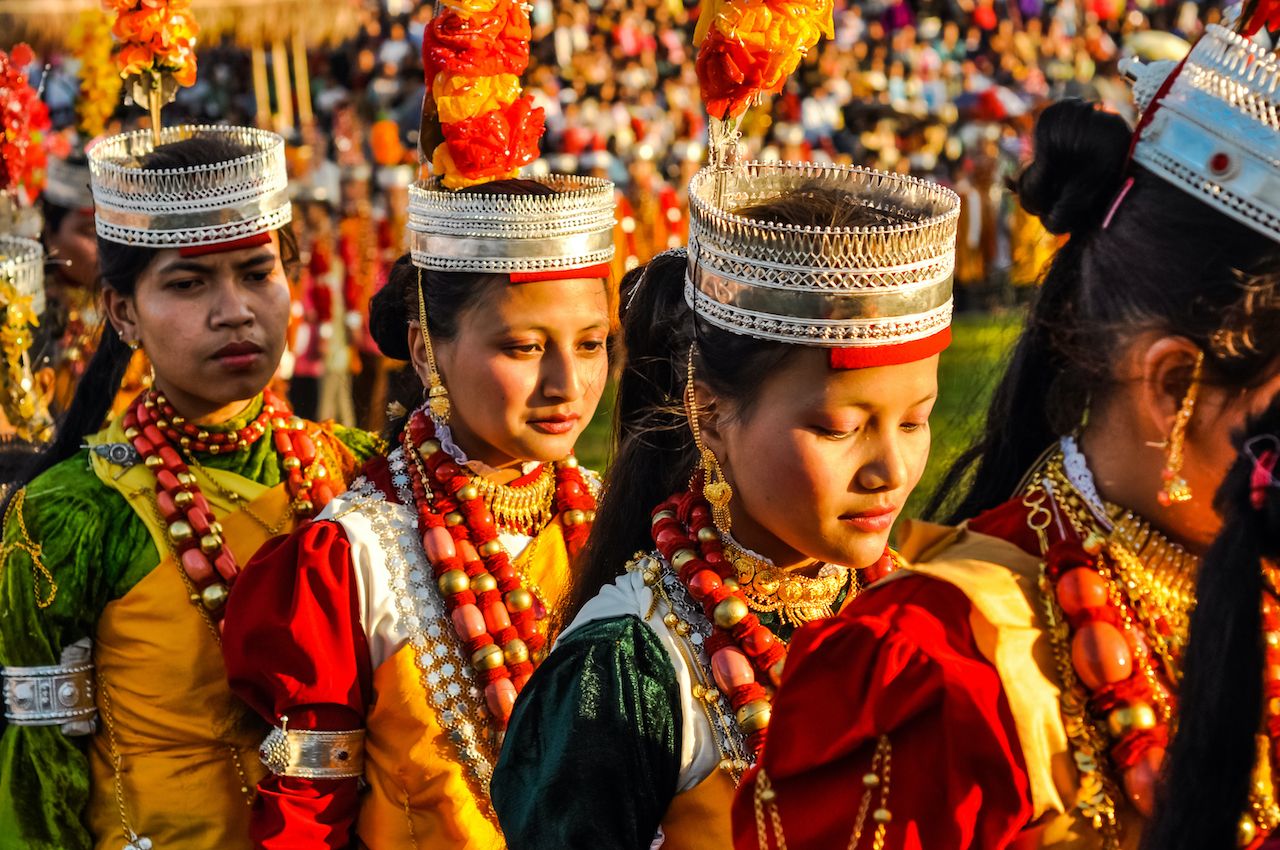 While not strictly matriarchal, the Khasi in northeast India’s Meghalaya state belong to a matrilineal society in which women are granted privileges that Khasi men are not, and have spoken out against much the way Western feminists petition for equality among the genders. As with any matrilineal system, property is passed down from the mother in Khasi culture, which appoints daughters as the recipients of their family’s inheritance. Unlike elsewhere in Indian culture, daughters are allowed to choose their suitors rather than have their marriage arranged.

When babies are born, it’s said that girls are celebrated whereas boys have been described as tolerated, antithetically to how male heirs have been celebrated in many cultures throughout history. While women are valued within families, however, it’s Khasi men that hold positions of political power. Nonetheless, Khasi men have begun protesting their culture’s matrilineal foundation, which they cite as sexist and emasculating. Much as many Western feminists fight for gender equality, these Khasi men make the same argument: They want not to devalue women, merely let men be treated equally and with equal respect.

BooksWhen Women Adventure, They Change the World. This Children’s Book Proves It.
Tagged
Culture
What did you think of this story?
Meh
Good
Awesome