If you were from Finland, you would have grown up with tales of trolls and their offbeat friends, living in a world of their own. These Moomin characters may well have been a part of your childhood outside of Finland as well — since their stories have been translated into 50 languages.

The first Moomin book, The Moomins and the Great Flood, was written in the waning months of the Second World War and published in 1945. The book, the first in a collection of stories that would influence every child in Finland from then on, is 75 years old this year.

“Moomin is such a big part of Finnish childhood,” says Heidi Högfors, a Finnish mother whose two boys grew up with the Moomin stories. “It was also in my childhood as well. So it goes from generation to generation.” 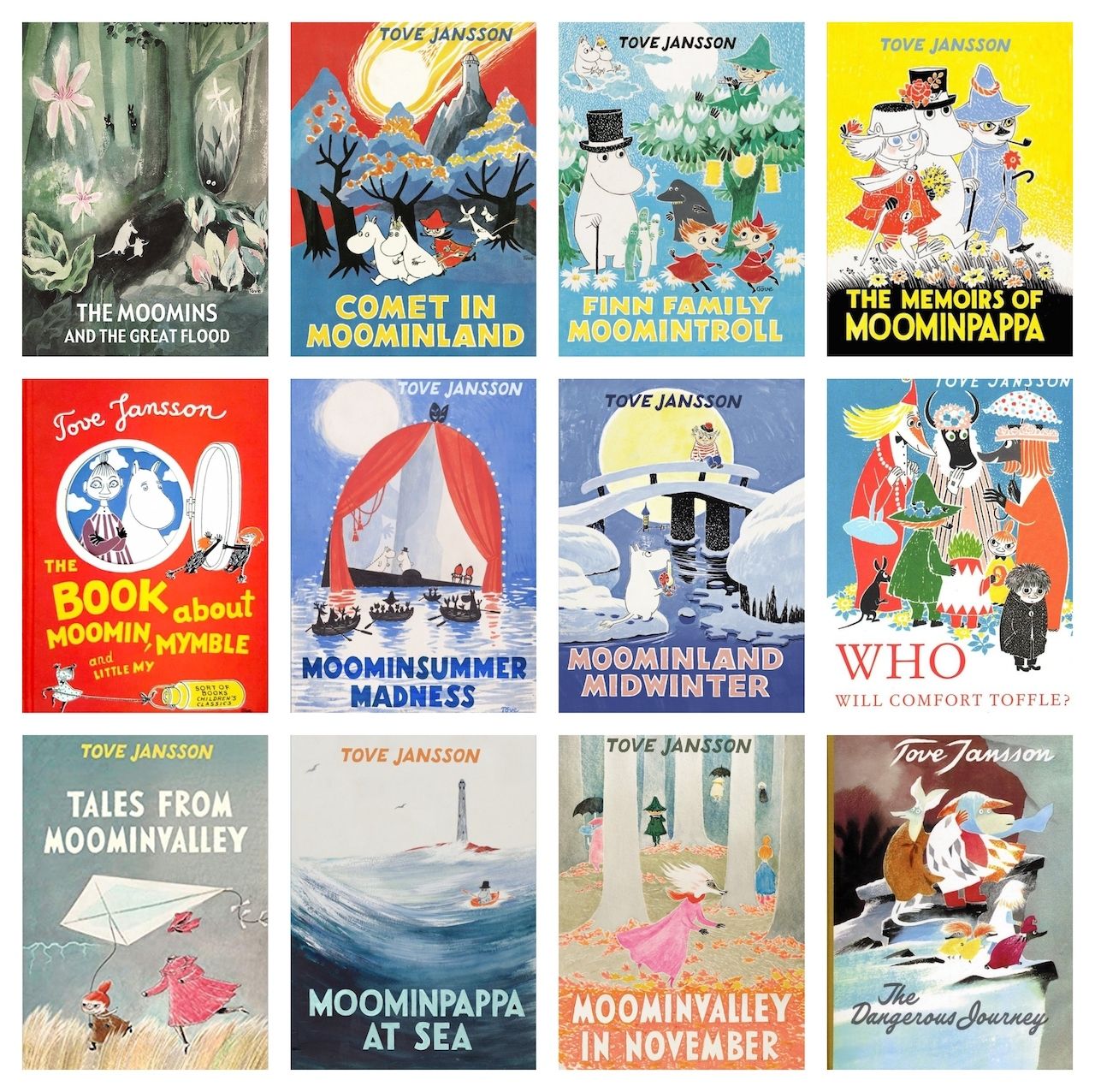 The Moomin family — Moominpappa, Moominmamma, and Moomintroll — live alongside a cast of quirky humans and a few other unusual creatures. The trolls are a friendly bunch, as are nearly all of the characters. Even those who appear frightening or angry are, like all the residents of Moomin Valley and the mountains beyond it, good inside.

The Moomin stories were written by Tove Jansson, the daughter of Finnish artists who had been struggling with her own creative career after dropping out of Paris’s École des Beaux-Arts and was dispirited by the devastation of WWII. With her brother off fighting in the war, Jansson wrote The Moomins and the Great Flood as a way to ease her mind. It tells the story of Moominmamma and her young Moomintroll searching the valley for their father.

The story, like all subsequent Moomin tales, confronts emotions like fear, loss, and loneliness but ends well — reaffirming the power of family, love, and friendship. Even the frightening creatures like The Groke, who is introduced later, are really just misunderstood and lonely.

“Even if there’s a scary part, the scary person is always kind inside,” says Högfors. “And this is also shown in the [cartoon] series. They are soft stories and friendly stories instead of having the kids get nightmares.”

Jansson was a member of the minority of Finns whose principal language is Swedish and first wrote her book in Swedish — although it was quickly translated into Finnish. Högfors and her family are also members of that Swedish-speaking minority, which now numbers about five percent of the Finnish population.

“It’s important for all the Finnish people,” says Högfors of the Moomin lore, but she notes that it feels special for her family to read it in the original language in which it was written. The Moomin books are also deeply popular in neighboring Sweden.

Because the Moomin cartoons that Swedes see are voiced by Swedish-speaking Finns, Swedes have come to associate the Swedish that Finns speak with Moomin Valley. Högfors says that when she met a Swedish mother some months ago, that mother said, “‘You speak Moomin Swedish.’”

The quirkiness of Jansson’s characters probably comes less from being a member of a minority language in Finland than from her own self-identity. Although she had serious relationships with men, Jansson eventually fell in love with her lifelong partner, Tuulikki Pietilä. The two saw each other secretly in Helsinki (same-sex relationships only became officially legal in Finland in 1971) and spent the summer months on an uninhabited island where they’d built a cottage. Some believe Pietilä is partly represented by the upbeat Too-Ticky, a can-do problem solver and close friend to the Moomin family. 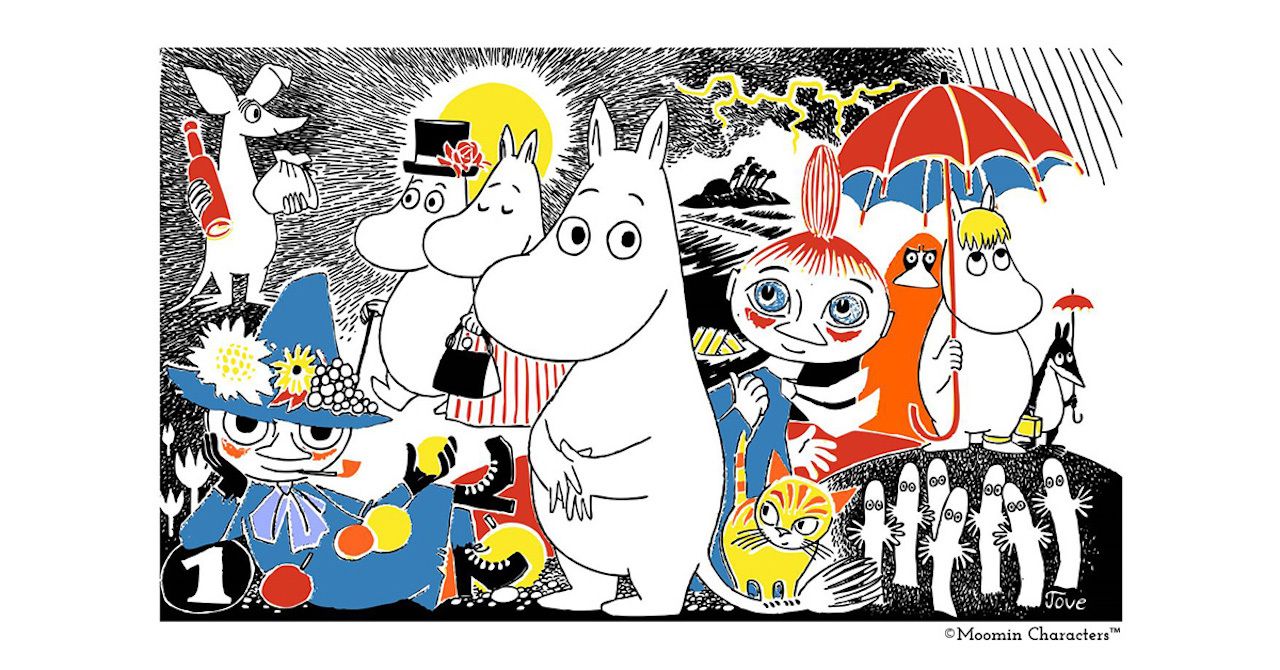 Many of Jansson’s characters like to spend time alone or cope with loneliness. There is Toft, a small, timid boy who struggles to feel a sense of belonging; the lighthouse keeper who, naturally, lives by himself; and Toffle, who is scared and lonely until he finds a friend.

Themes of solitude seem fitting in a country that appreciates the power of silence and the idea of relying on one’s own inner strength to persevere. Yet while one can find some distinctly Finnish traits amongst the Moomins, there are very universal ones as well — and each fan of the Moomin stories seems to find a character with which they most identify.

“The main thing is [Snufkin is] very calm, and that’s exactly Dennis,” says Högfors, noting that, “the choice of the children represents their personalities.”

For her own part, Högfors’s favorite character growing up was Little My, an impish young human with a bun of hair on the top of her head and a naughty grin who lives with the Moomin family. Högfors, who is as petite in our world as Little My is in the Moomin world, says she even dressed up as Little My for a traditional costume event during her last year of high school.

“I always liked Little My, the one who hits everyone with a frying pan,” laughs Högfors. “I get mad really quickly, but then I calm down really quickly. That’s exactly like her.”

Eventually, Jansson wrote nine Moomin books, four picture books, and a comic strip series that lasted years. Even today, the comic strip is kept up by a Jansson family member using the treasure trove of images created by Tove Jansson herself, who passed away in 2001. 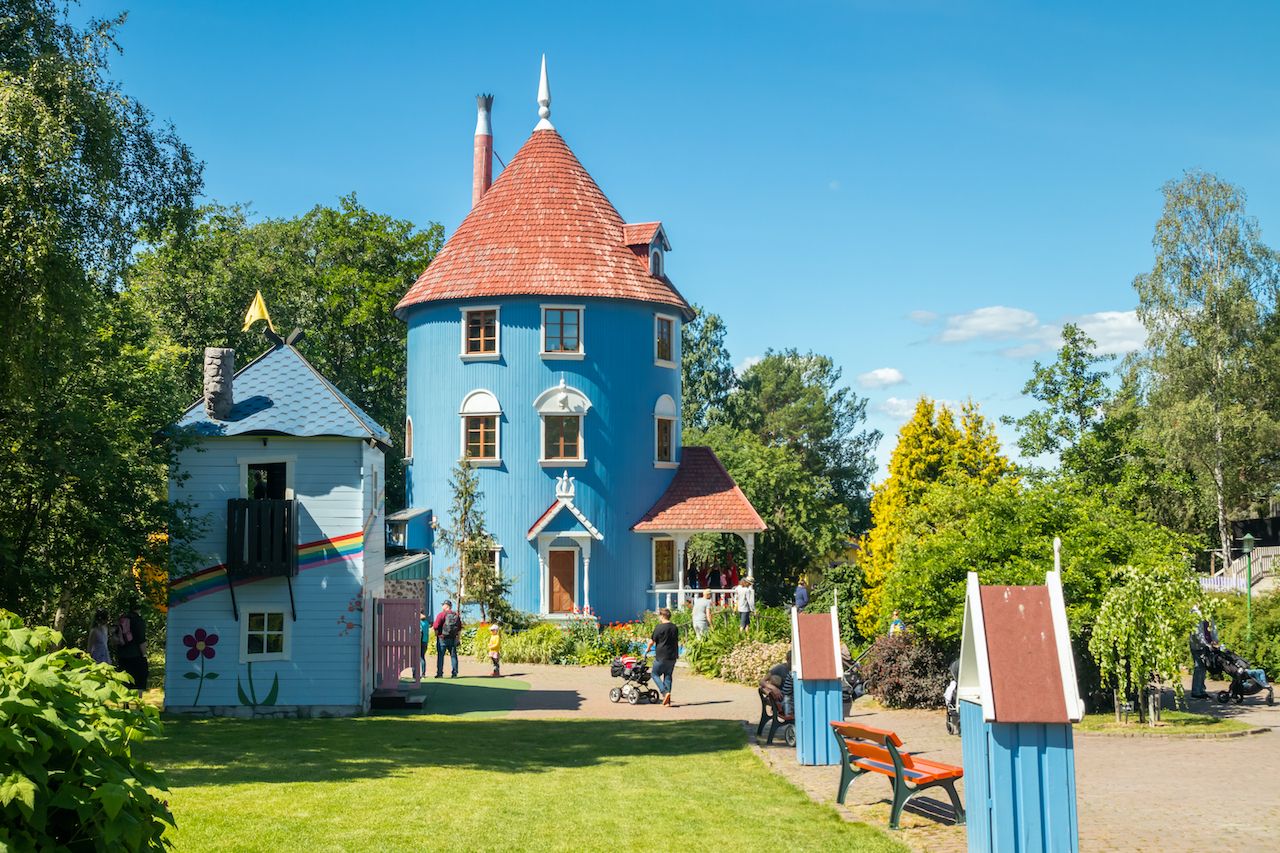 Finland has a Moomin Museum and a park called Moomin World. In keeping with Jannson’s own gentle disposition, Moomin World is not the loud, adrenaline-filled experience of a more typical amusement park. Rather, the leafy, wooded grounds let kids peer into the places of Moominvalley.

Moomin World is almost a right of passage for Finnish kids. Högfors’s own boys have been twice, she says, noting, “All Finns go at least once.” (My own half-Finnish kids have been as well.)

The Moomin stories have also been retold in films and last year Moomin Valley, an animated musical series began airing in Finland and the UK. Thirty years before that, in 1990, an anime cartoon series called Moomin, produced by a joint Finnish, Dutch, and Japanese production company, began airing. That cemented a love for Moomins in Japan, which has a Moomin Valley park as of last year, and which remains a major market for Moomin merchandise. 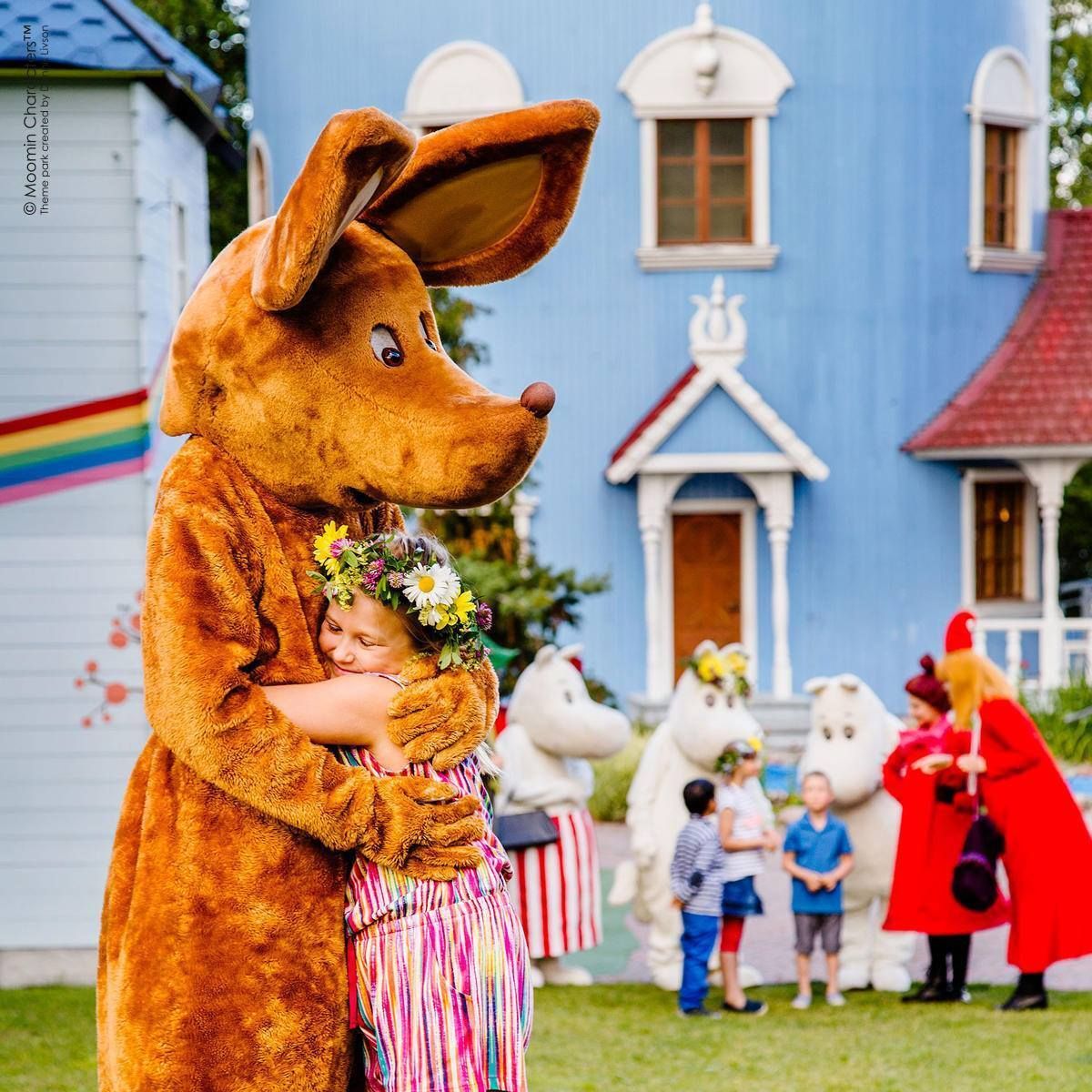 In keeping with the calm Moomin motif, and perhaps with the Finnish ethos as well, that Moomin merchandise does not spread across an unruly swath of categories. Certainly children can rest comfortably at night with Moomin sheets while hugging their Moomin dolls, but the biggest joy of the day may be waking up to their Moomin breakfast cereals and Moomin mugs.

Högfors has several dozen mugs, some worth over a thousand euros, all made by the Finnish ceramic company Arabia. There are specialty mugs with certain characters and motifs that are made but once. It’s these that can quickly become collector’s items. 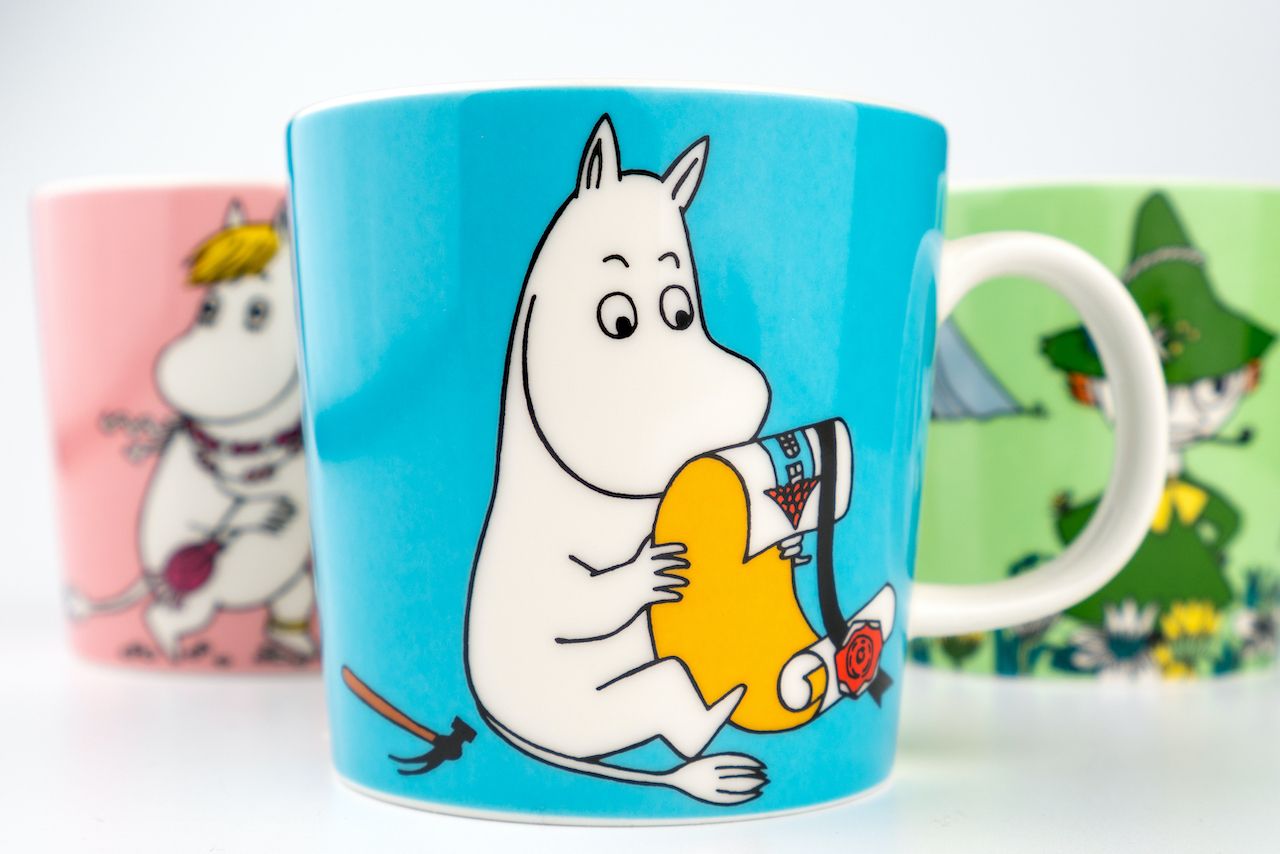 Some Moomin mugs are released only in Japan, and while Högfors doesn’t know anyone personally who has flown to Japan to snap them up, she says she did read in the Finnish newspaper about avid Moomin fans who had flown to Tokyo just for the unveiling of a new Moomin mug.

Högfors concedes that her mother-in-law lined up at 6 AM one morning to snap up the specialty mugs to give to her grandchildren. “We still have them in packages,” says Högfors of those mugs, noting that they need to remain unused to keep their worth.

While she keeps the most valuable mugs in their original boxes, the majority of the Högfors’s mugs are a part of everyday life. As tweens and teens, her sons no longer read Moomin books, but they still drink from their Moomin mugs every morning, says Högfors.

In our own half-Finnish home, we too drink from Moomin mugs from time to time. I used to resist the Little My mug since the character has such a naughty look. Knowing her better now, recognizing that she is — in the words of the Moomin site itself — “honest and reliable,” I’m more inclined to drink from that particular white, black, and green mug.

Perhaps now would also be a good time to peruse the Moomin books that have languished on the shelf of our youngest child, now in his teenage years. In a turbulent and divided world, it might be nice to find the solace of a Moomin world where family and relationships matter more than anything else, and where even the scary creatures that live in the mountains are just looking for a friend.

FashionMarimekko, Finland’s Iconic Brand, Is Nothing Like Minimalist Nordic Design Clichés
Tagged
Books Culture Finland
What did you think of this story?
Meh
Good
Awesome

Finland Just Equalized Family Leave, With 7 Months for Each Parent
6 of the Most Extreme Dining Experiences in the World