Picture a rainy day in Helsinki, Finland. People walk the streets, getting off trams or stepping into shops. The tones are subdued — mostly grey, beige, black. Suddenly there’s a pop of color, and then another. An umbrella with vibrant blue flowers here, a raincoat with big, red circles there.

You walk into a warm Finnish home. The living room is uncluttered, with a soothing palette of earth tones — save the yellow throw pillows on the sofa. In the mostly white kitchen, your eyes are drawn to plateware ringed with bold, black, imperfectly round dots. 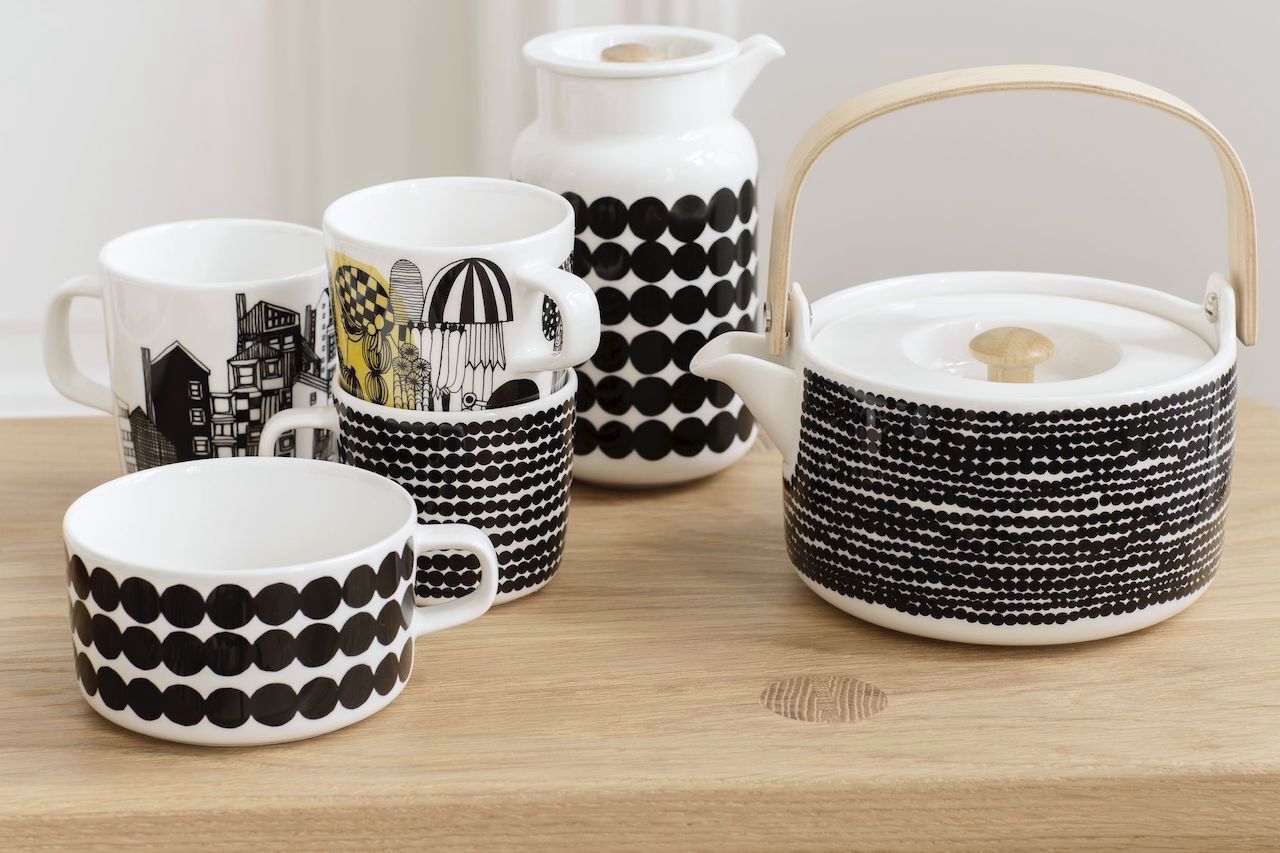 The bright and eye-popping patterns on everything from dresses to coffee mugs are all thanks to Marimekko, the design house that for over a half-century has left an indelible mark on Finnish design. Most Finnish design is muted, reflecting the quiet, snowy winters and serene nature that is so abundant in that forested, lake-filled country.

“Typically [Finnish design] would be described as being based on forms from nature, derived from nature,” says Susanna Thiel, Collection Curator at Helsinki’s Design Museum. As to the colors used in that design, Thiel adds, “The spectrum is usually very down to earth. I would describe it as brown, blue — not that much red, but grey. Earthy tones.”

In Finland, as in other Nordic countries like Sweden and Denmark, design tends to be spare, favoring clean lines over ornamentation. Thiel believes the almost spartan aspect of Finnish design can be traced to a postwar shortage of materials.

“I think that there wasn’t that much of an abundance of materials in the postwar era. There was a scarcity of materials and raw materials so you really had to make everything possible out of things that you got,” says Thiel. 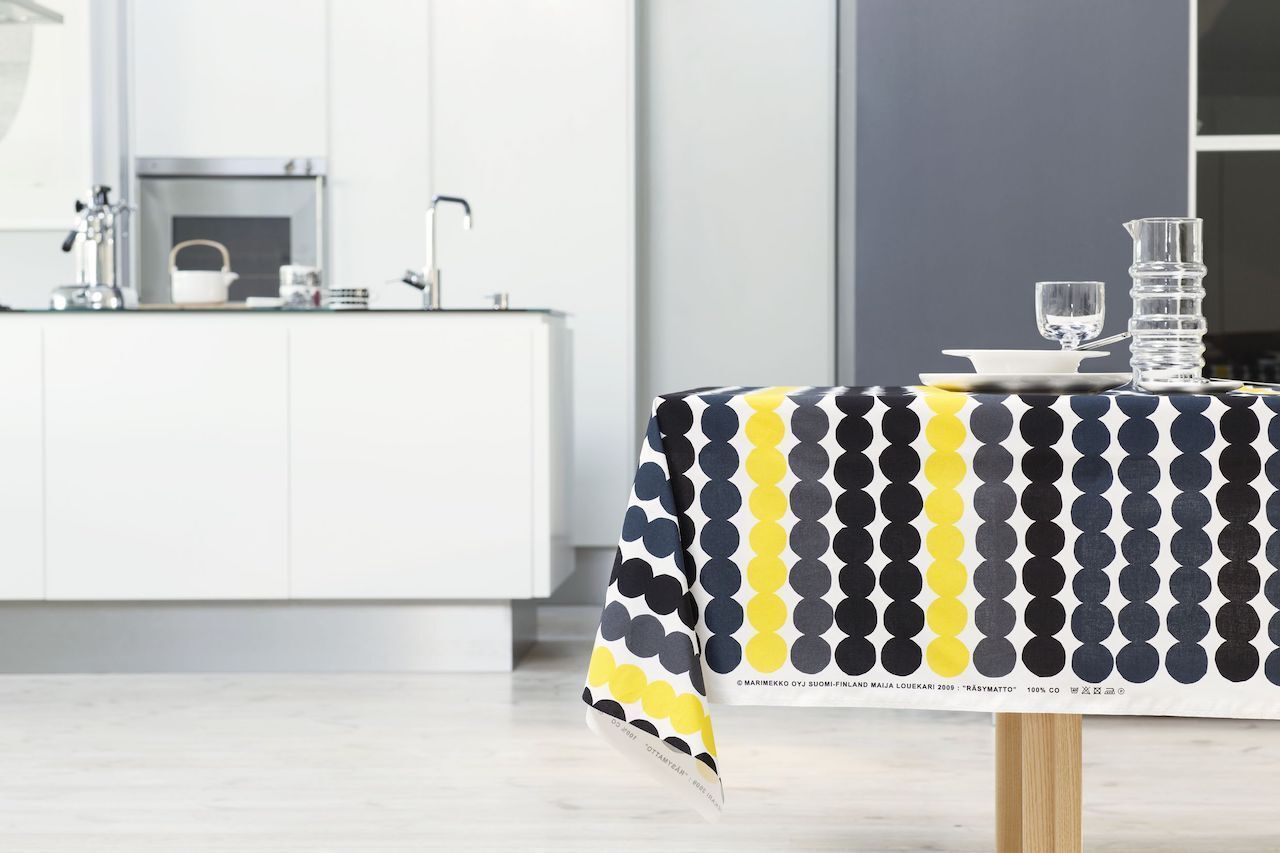 The spare aesthetic is perhaps also traceable to the Finnish penchant for modesty and the stoic value of sisu, a quiet inner fortitude, that’s favored by Finns. Excess and showiness don’t really fit into that mindset. How, then, did the vibrant patterns of Marimekko become such an iconic element of Finnish design?

It could be that by the 1950s, emerging from the war’s devastation, Finns were ready for a dose of hope. At least Armi Ratia was, converting her husband’s Viljo Ratia’s oilcloth company into one making brightly hued prints. Soon they were turning those fabrics into dresses, which also served to inspire the company’s new name — since Marimekko combines Armi Ratia’s middle name, Maria, with the Finnish word for dress, mekko.

Armi Ratia looked ahead artistically, opting for clothing forms that broke from the constrained styles of the past. “It was all about liberating women from wearing this kind of a tight corset-figure-like outfit,” says Thiel of Marimekko’s approach for the Finnish market. “They wanted to create something where there was this kind of freedom of movement idea behind it. So that was popular.” 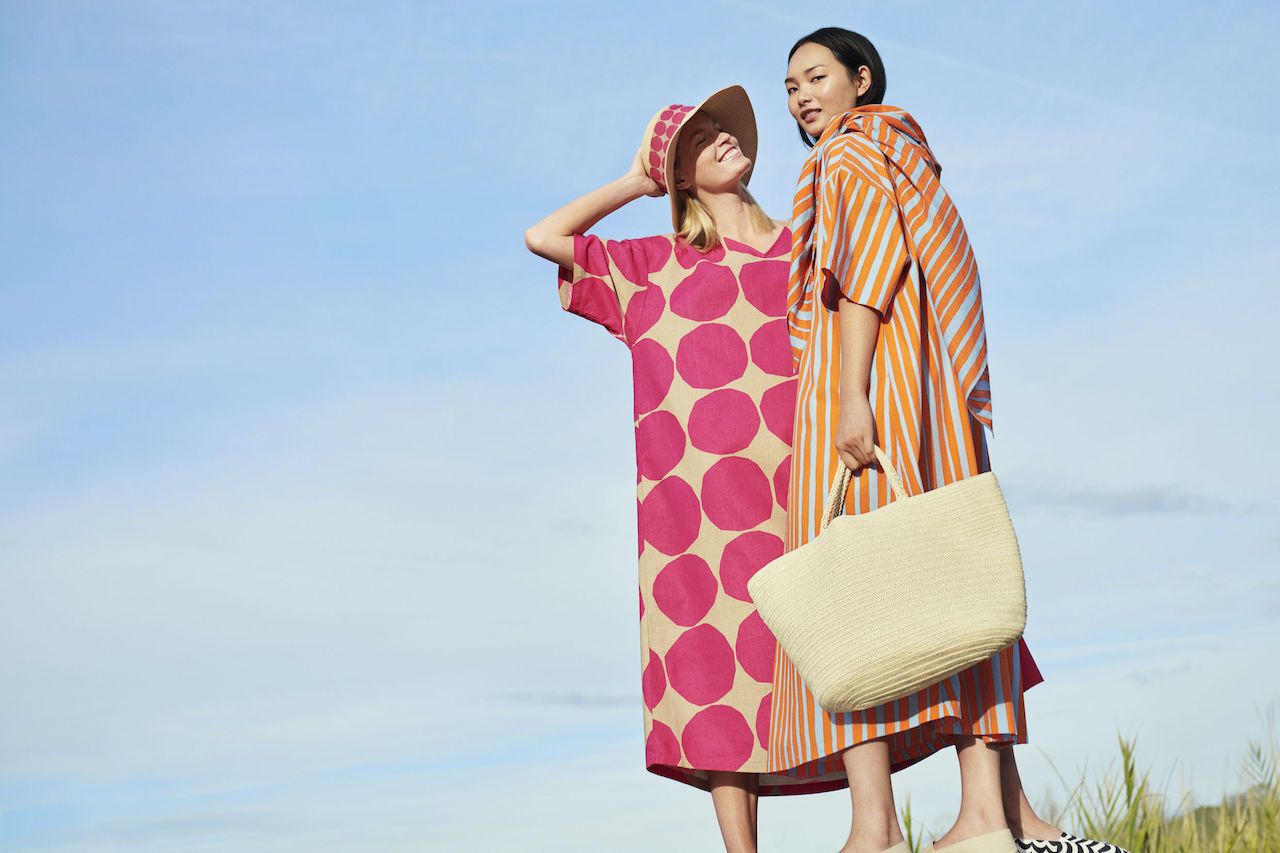 In 1960, Jacqueline Kennedy was on the campaign trail with John F. Kennedy, and she opted for Marimekko dresses because their bold colors reflected the optimism her husband wanted to project. Moreover, the loose fit was perfect as she was pregnant with John Kennedy, Jr.

“Jacqueline Kennedy wearing the Marimekko dresses as maternal wear … that was a huge step onwards for Marimekko to hit the US market for good,” says Thiel.

While Jacquie Kennedy’s choice to wear a designer essentially unknown in the US certainly helped propel the Marimekko name, arguably Marimekko’s biggest moment came a few years later, in 1964. That’s when one of the designers working for Armi Ratia decided to ignore her boss’s prohibition on flower patterns.

“Armi Ratia … had publicly forbidden all Marimekko designers from creating floral prints, as she felt that flowers would always be more beautiful in nature,” explains Sylvia Sene, Marimekko’s Global PR Manager, via email. “However, designer Maija Isola did not care about Armi’s restrictions and went ahead to create something interesting from this organic theme and designed an entire range of floral prints, one of them being Unikko.” 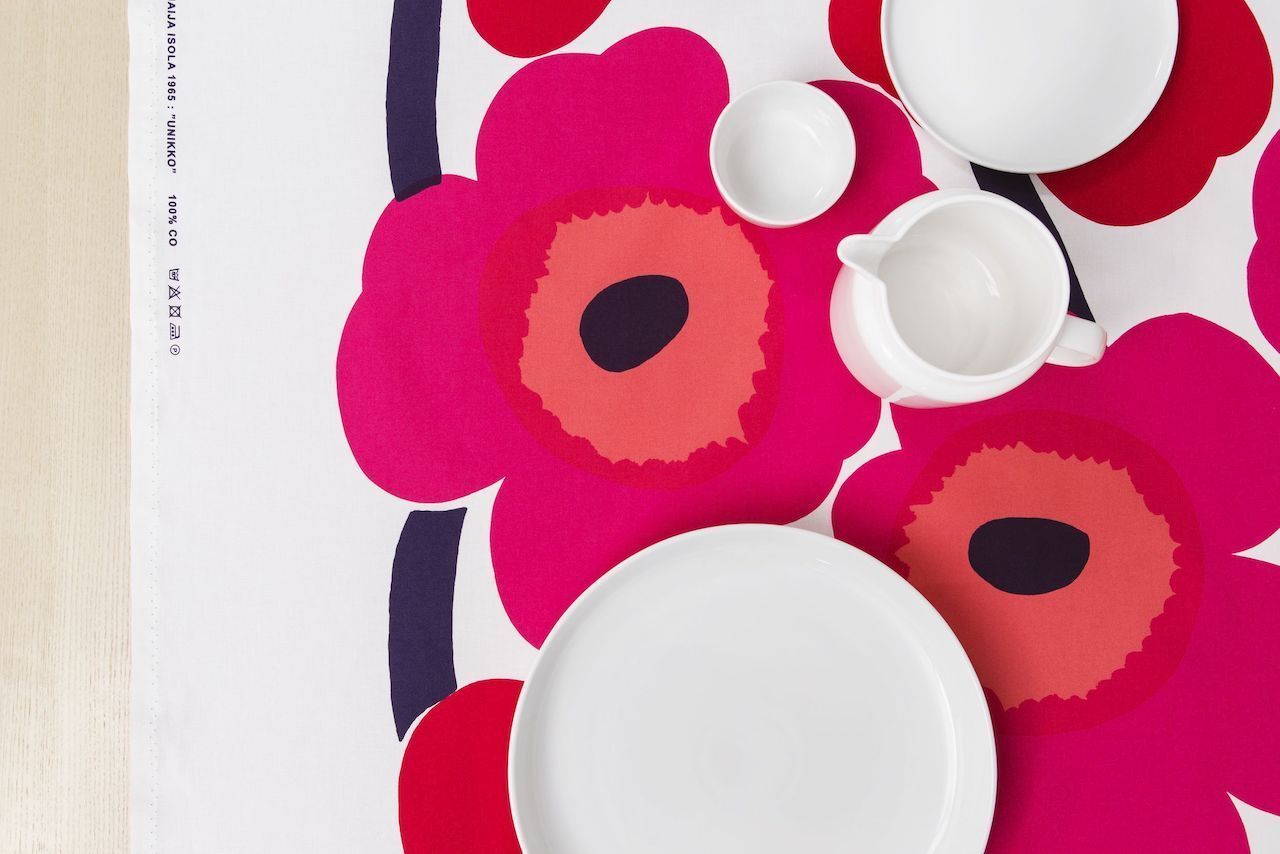 Unikko means “poppy” in Finnish. As Sene notes, “Maija showed the prints to Armi, and when Armi saw the avant-garde, bold, and modern poppy flower, she changed her mind.”

In a way, the poppy print changed everything. Although the poppy itself wasn’t a creation of Armi Ratia, it reflected her vibrant personality and the bold ambitions of her company.

Marimekko’s means of doing business was unusual in Finland, where no one wants to stand out too much.

The ethos in Finland is that “each and every individual should have the same kind of equal rights and equal way, for example, in entrepreneurship and entering their own businesses and that sort of thing,” says Thiel. “The business that Armi Ratia built from Marimekko was something completely different in the Finnish business landscape.”

“It was bold, and they were quite loud,” continues Thiel, contrasting the Marimekko strategy with Finland’s “down to earth” approach. This gutsy attitude, says Thiel, was “strongly related to Armi Ratia’s personality.” 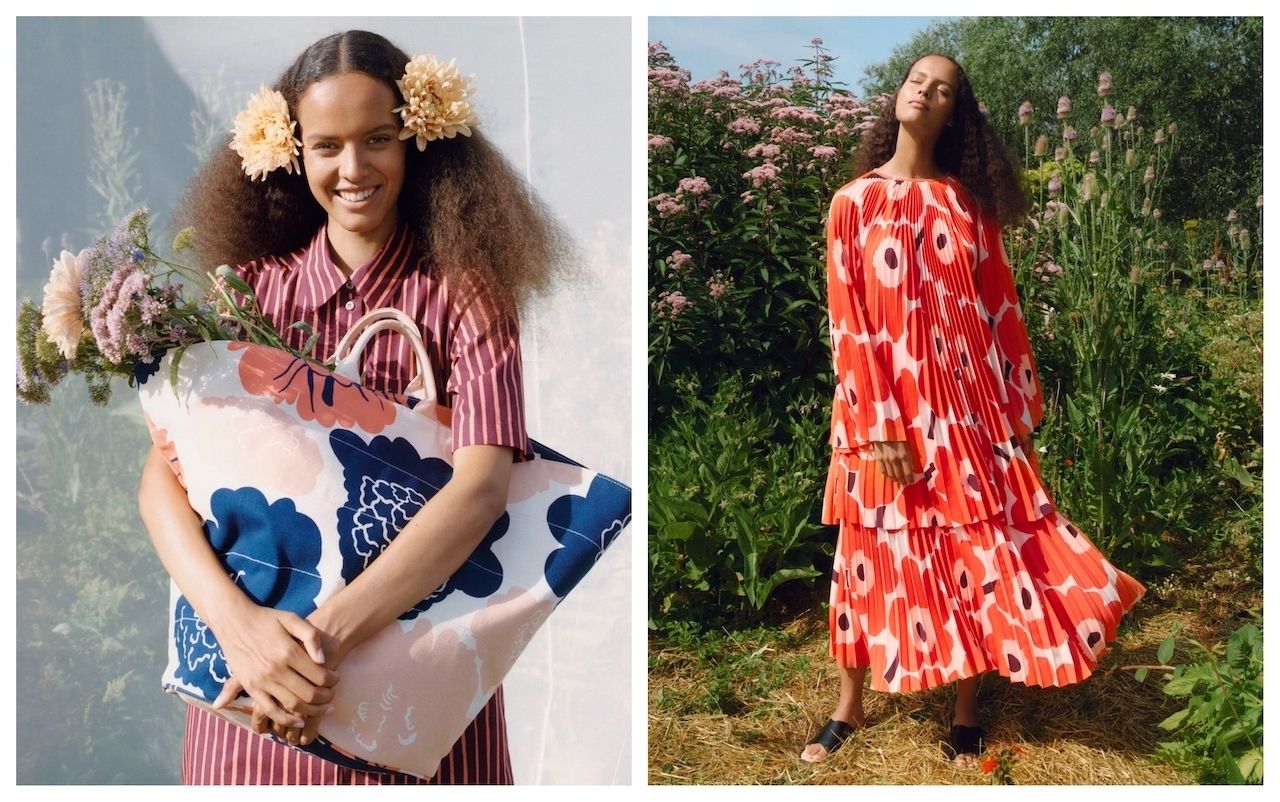 “They started to think about that brand image quite early on. It’s what Finns would probably call the US way of doing business. So the ideas and the information about how you build your business came actually from the States,” says Thiel.

In many ways, the Unikko poppy fits perfectly into the Marimekko brand. While floral prints had in fact existed in Finland, they had been restrained. The poppy represented a rethinking of what is possible, and Finland was ready for it.

“The iconic Unikko has thereafter been in Marimekko’s collections ever since with its beautiful story representing the freedom of creativity,” says Marimekko’s Sene. “Until the birth of Unikko, the floral theme was interpreted in a rather romantic way. Unikko, however, changed that as it brought a more dynamic and graphical take to this theme.”

Today, Marimekko, which generates annual revenues of well over $100 million, has moved beyond dressmaking into a full-on lifestyle brand. In Finland, residences and restaurants are embellished with Marimekko’s striking motifs. Bed sheets come to life in blue Unikko flowers, and cafes serve flat whites in dotted Marimekko mugs.

Marimekko is now in homes around the world. Its creations increasingly appear in US television series, as set designers appreciate the pop of color they provide. Marimekko dresses, bikinis, throw pillows, curtains, and bowls have appeared everywhere from Sex and the City and Blackish to Pretty Little Liars and Madame Secretary. Megan Markle’s character Rachel Zane drank from a Marimekko coffee cup in the series Suits.

Marimekko’s impact has reached beyond Finland but has also very much touched its home country. “Finnish design might often be thought of as minimalistic, but the use of color in prints is still noticeable. In that sense, Marimekko’s printmaking and bold use of color and shapes has had a big influence in Finland’s design language,” says Marimekko’s Sene. 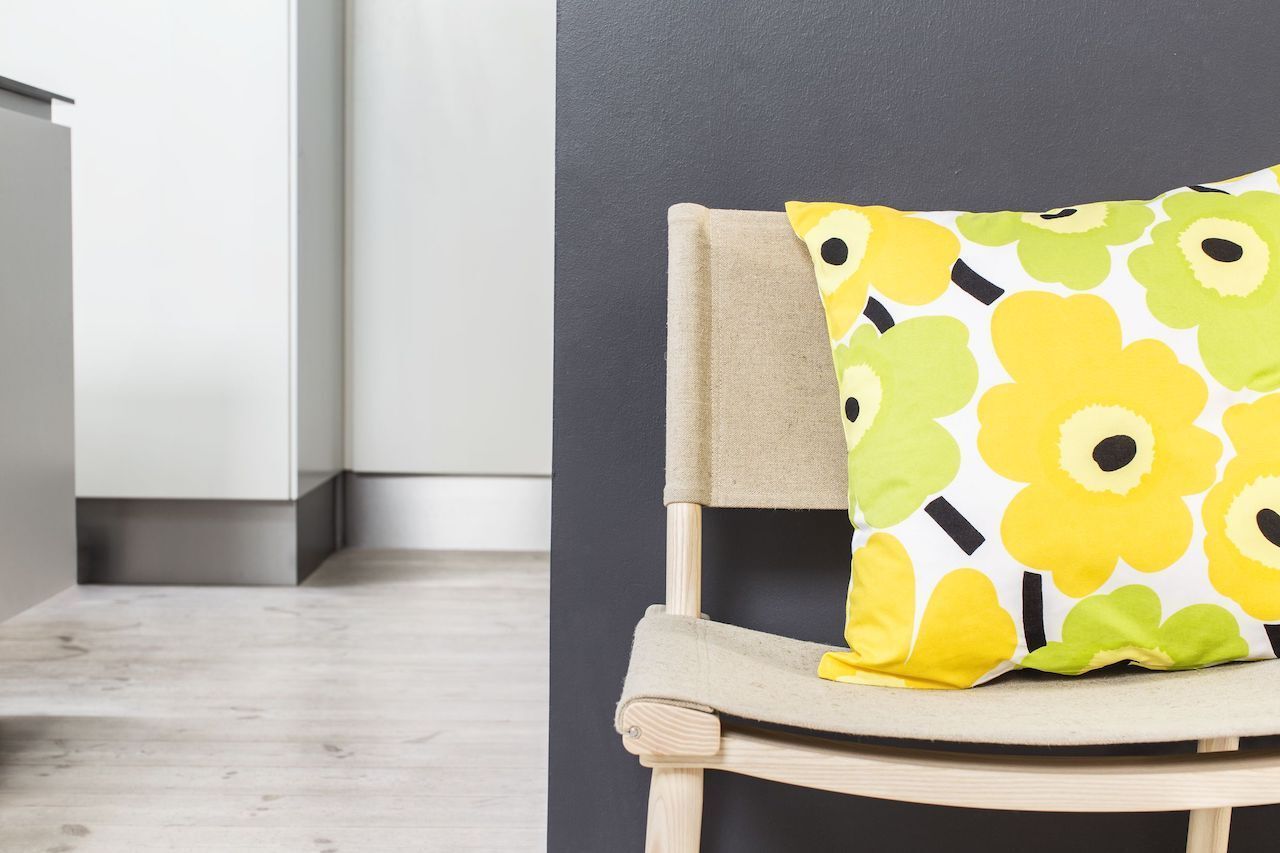 As the company continues to innovate, its designs are attracting a more youthful audience as well, offering black hoodies bearing a single, pale pink Unikko poppy, wearable by both men and women.

“Unikko is definitely one of our most loved prints worldwide, and has almost become a symbol of Marimekko,” says Marimekko’s Sene. 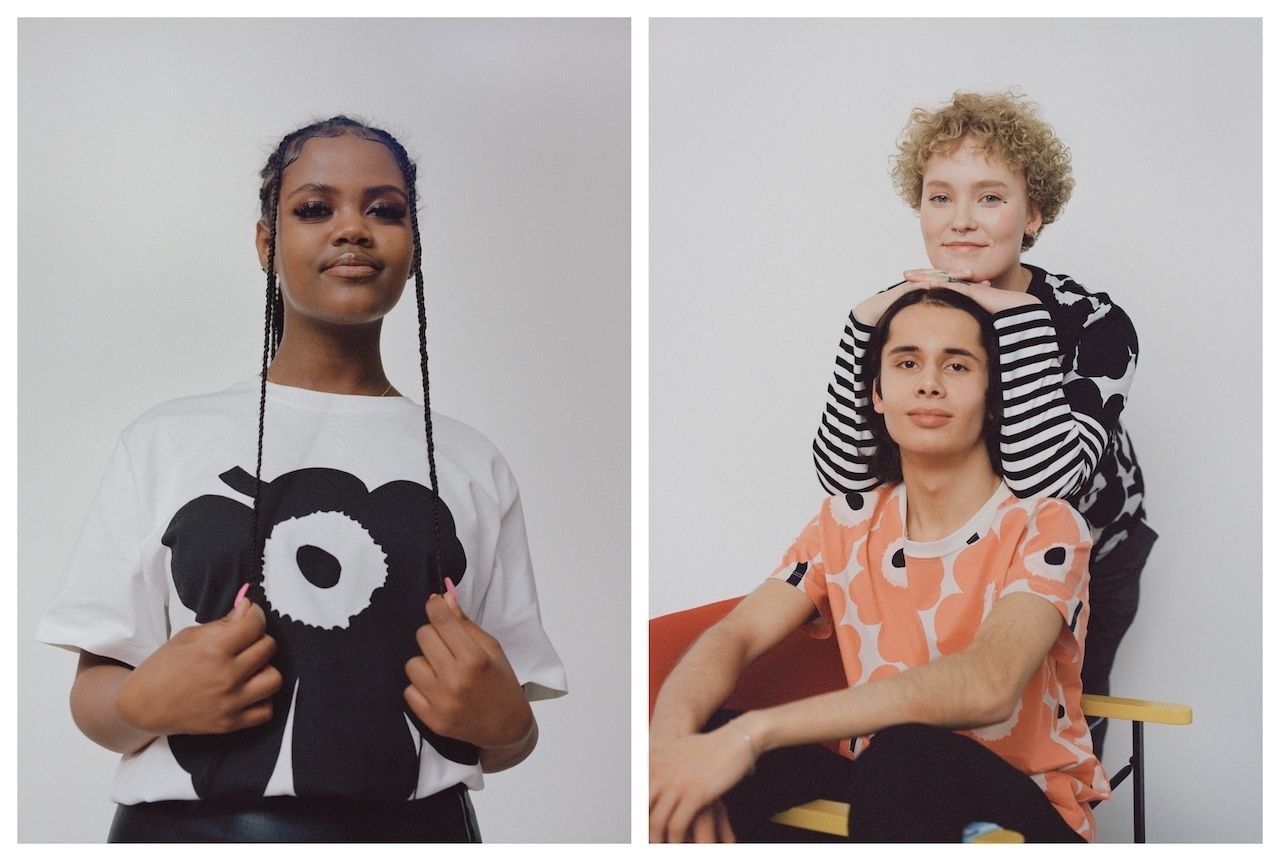 But Marimekko also has created 3,500 designs in its history, with more innovative patterns introduced every season. With a marketing ambition originally inspired by the US and, today, designers not just from Finland but around the world, this dynamic company has been shaped by and has shaped the Finnish landscape.

“I think they had an impact on Finnish design, and they’ve been on the front line to create this kind of new Finnish design,” says Thiel, discussing Marimekko’s reach into the global market. Marimekko, it seems, has shaped the design future of the whole region.

Says Thiel, “I would say that they are doing a new Nordic design.”

CultureThe 5 Most Beautiful Towns in Finland Tourists Miss
Tagged
Fashion Finland
What did you think of this story?
Meh
Good
Awesome

May 23, 2022 Alex Bresler
✖
travelstoke
Download the mobile app
stoked by