Helsinki tends to evoke little more than a cold, isolated, and boring Nordic outpost. But if you look a little deeper, a whimsical and slightly offbeat vibe come through in its aesthetic. The Finnish capital’s East-meets-West atmosphere (due to the nation having been part of Russia and Sweden through its history) complements its Finnish functionalism, Nordic National Romanticism, and Jugendstil architectural styles, almost screaming to be the backdrop of a long, single-frame shot. The vintage public transportation, pale pink and green edifices, Art Nouveau castle-like apartment buildings, and pastel-colored churches hiding in parks are exactly what you’d expect to see in a Wes Anderson movie. If you’re a fan of The Grand Budapest Hotel or The Royal Tenenbaums, no other destination will tickle your fancy the way Helsinki will. 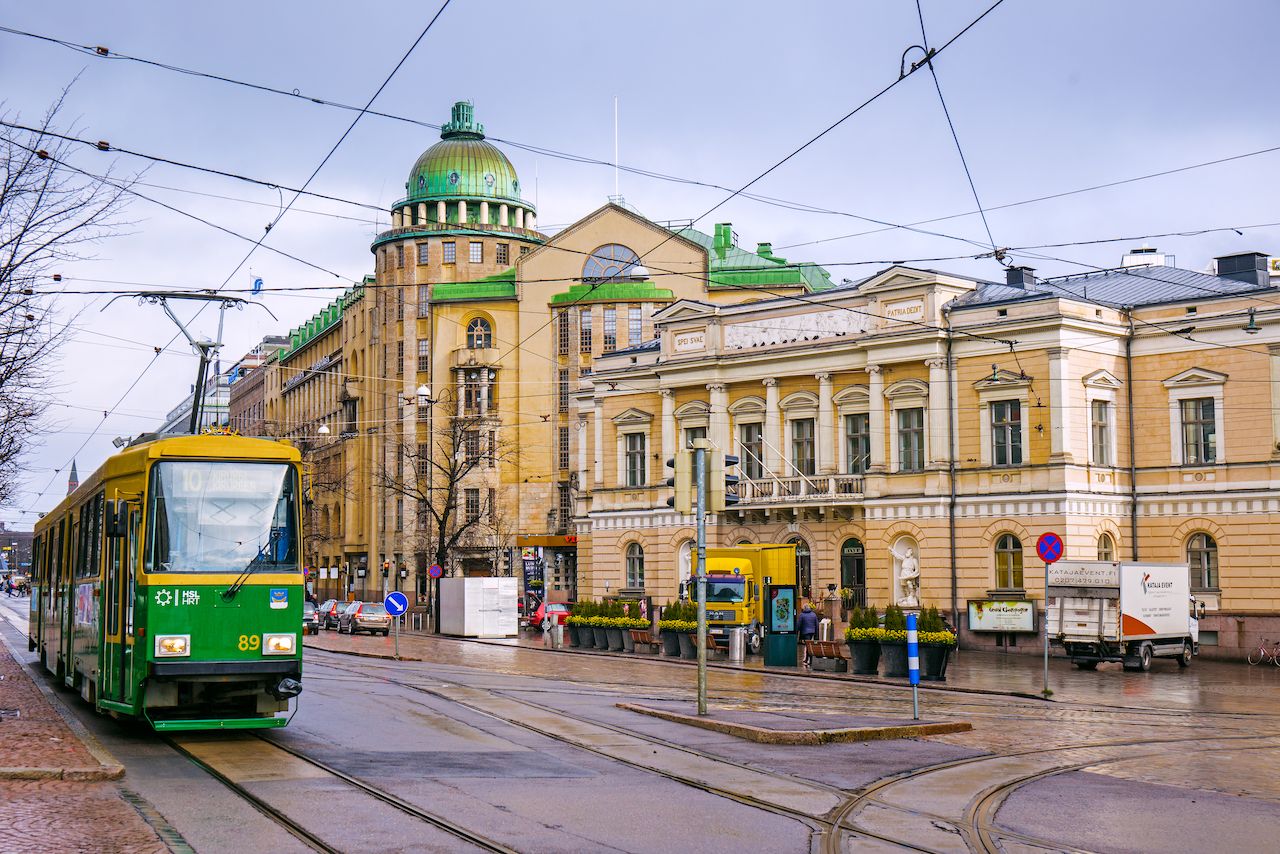 Helsinkians are proud of their yellow and green tram, and they should be. You too will be charmed by the vintage-looking public transport the moment a streetcar veers around a corner and into view. Any picture of the tram against a backdrop of an iconic building will be a keeper — and there’s no need to kneel down on the tracks in front of an oncoming car. A shot of the white Lutheran Cathedral as the tram moves by is a classic photo, an ideal place to reenact the iconic scene of Margot Tenenbaum in that fur coat with the old green public buses behind her.

This pink church was built in 1930 is a fine example of Nordic Classicism. The Töölö Church reopened in early 2016 after three-and-a-half years of renovations. Helsinki is known for its urban forests, and this church is sort of hidden in the woods of the Taka-Töölö district, where there’s also a beautiful lake to check out for some contemplative time. 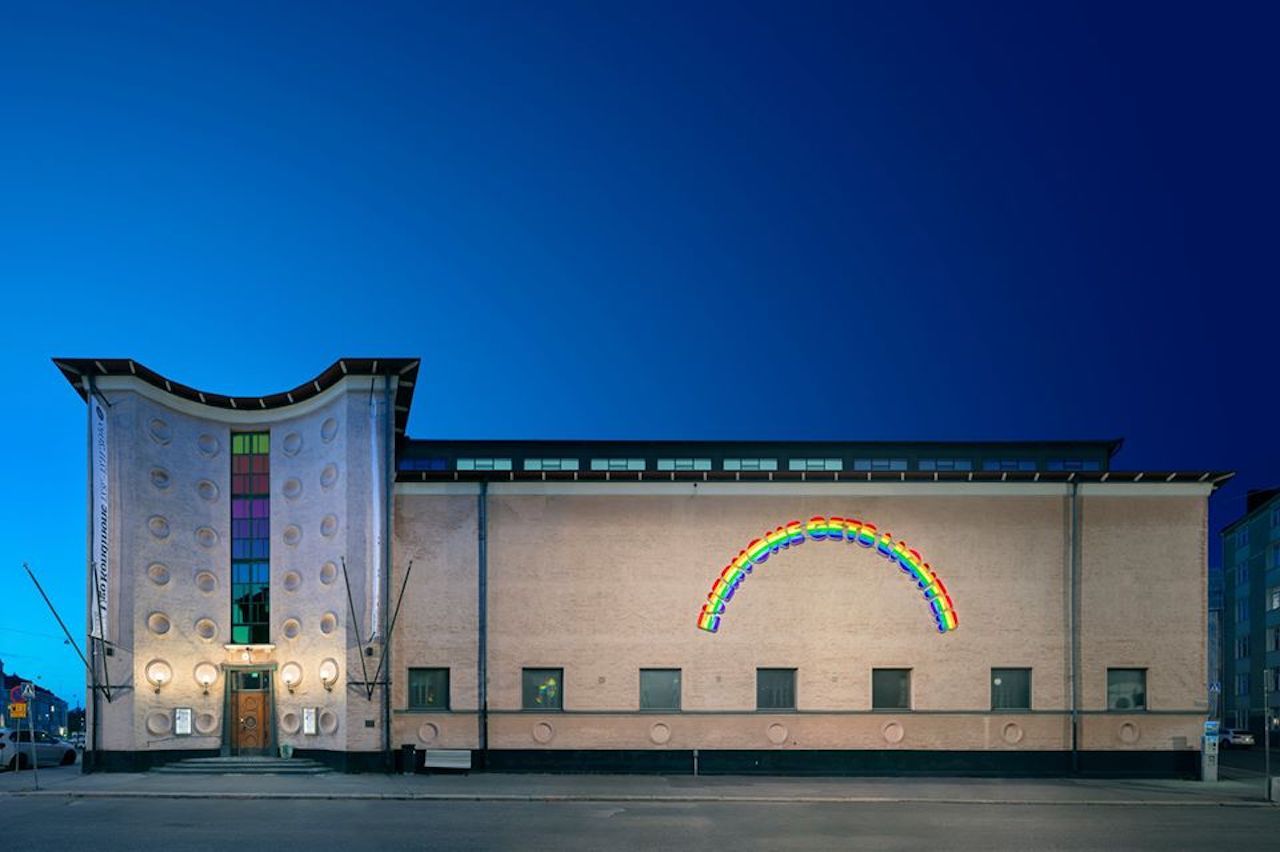 Taidehalli is an art exhibition space founded by Finnish artists and art associations in 1928. Another beautiful example of Northern Classicism, it was designed, like Töölö Church, by famous Finnish architect Hilding Ekelund. You’ll be fascinated by its baby-pink exterior and porthole-style indentations on either side of a thin vertical window, as well as the wooden front door with matching graphics in keeping with Anderson’s use of negative space and trademark symmetry. 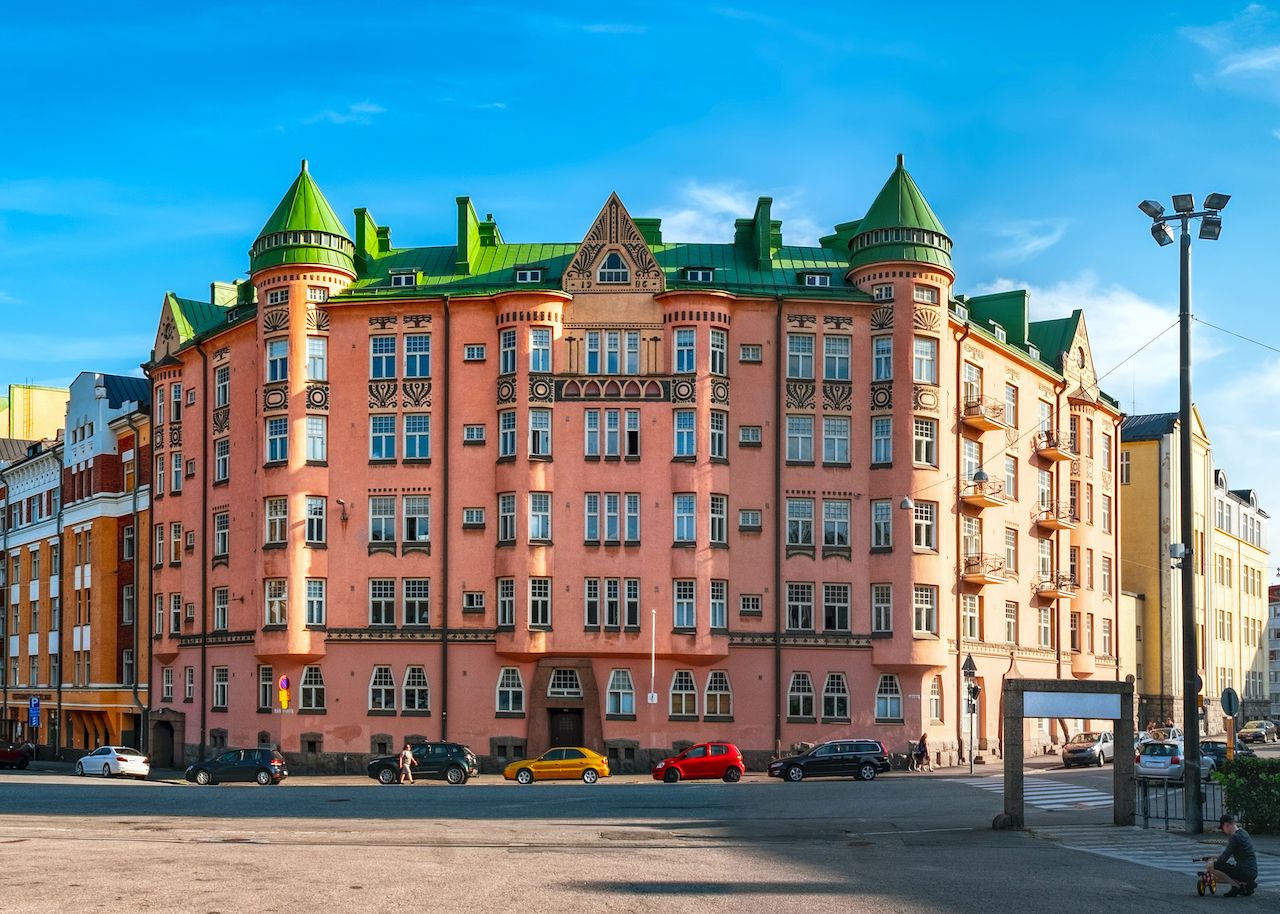 If you want to hang with the hipsters, head to gentrifying Kallio, on the east side of the city. A landmark of the area, this castle-like apartment building called Ihantola (“Wonderful Place”) was built between 1905 and 1907. It’s spot-on Wes Anderson — the decorated gables, pink walls, and green turrets of its Nordic National Romantic architecture give it the touch of a louche fairytale.

After you’re finished ‘gramming the building (don’t forget to zoom in on the gorgeous wrought-iron balconies), head out to explore Kallio. The once-rough, now-cool neighborhood is full of up-and-coming bars, craft beer pubs, vintage stores, and near-celebrity chefs. You might catch one shopping for fruits, veggies, or reindeer charcuterie at the grand Hakaniemi food market.

This Art Deco swimming pool was Helsinki’s first public indoor pool, opened in 1928, and it was recently fully renovated. A consistent aesthetic of cool blues and greens, you could almost picture Chas Tenenbaum and his sons swimming here. The pool sits in the middle of a balcony-lined building designed by architect Väinö Vähäkallio. Aesthetics aside, what you’ll find special about Yrjönkatu is that swimming is traditionally done naked — though bathing suits are optional if you’re timid — and women and men have separate swimming times. Get the full vintage swim-hall experience by also renting a private changing room. The tiny white-and-blue tiles and the single day bed to rest in look straight out of the 1930s.

6. The Chapel of Silence 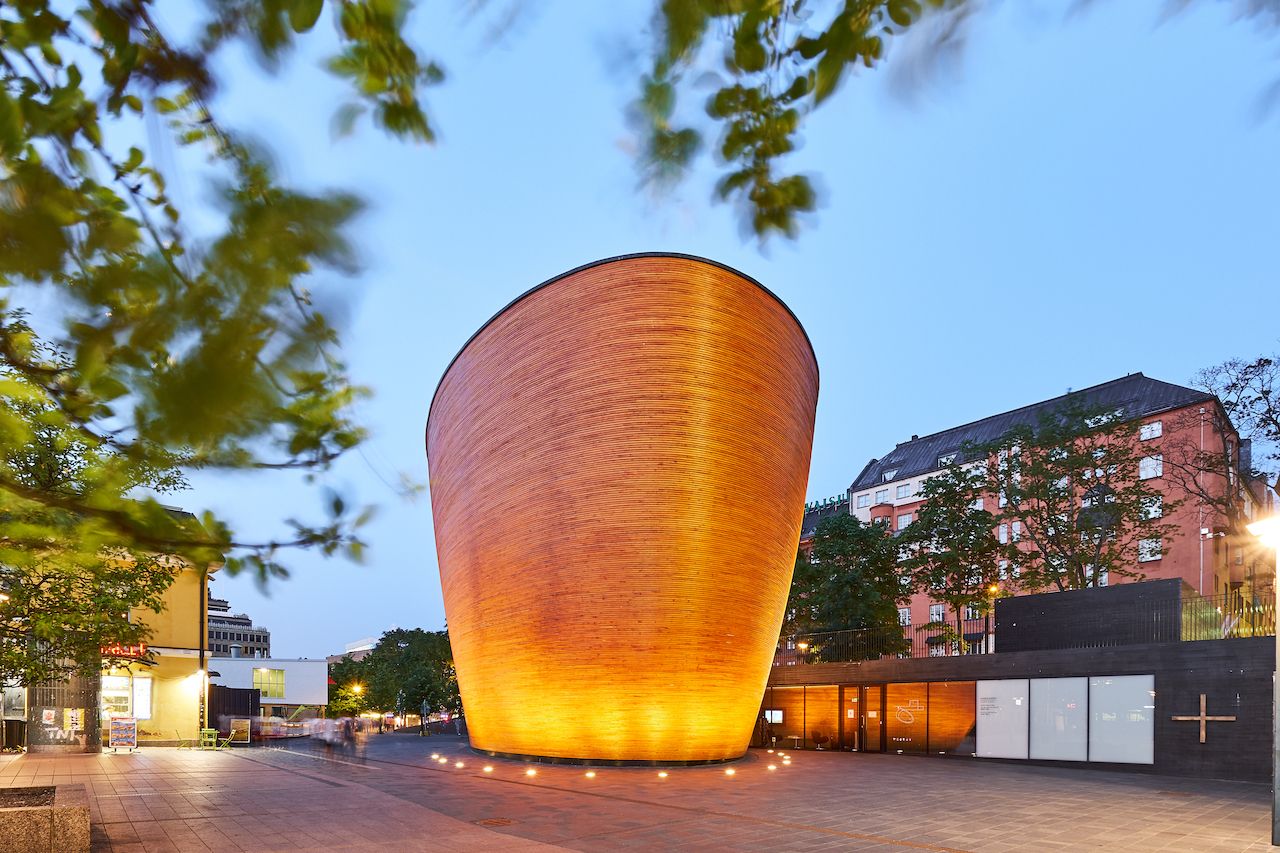 The Kamppi Chapel, also known as the Chapel of Silence, is a quirky and modern take on Finnish wooden architecture. It’s not a functioning church in that no ceremonies take place here. The small, circular, windowless chapel stands in the middle of a busy city center square next to a giant mall and is meant as a place of respite from the hustle of the city. Inside, there’s just the pews, a pulpit clad in a bright green textiles, and a stream of light coming through a skylight. Go in and take a seat on one of the wooden pews, and take in the ultra-minimalist aesthetic. 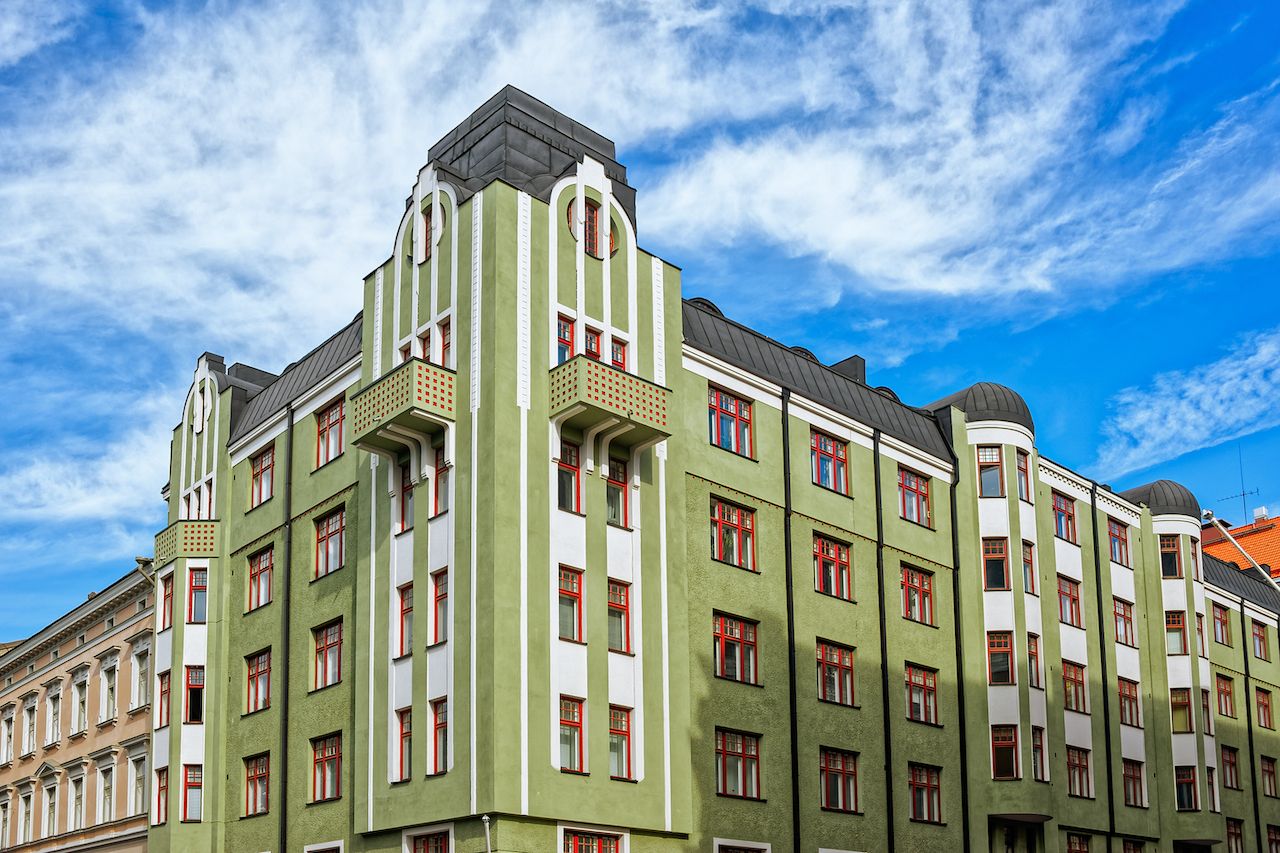 Helsinki has entire streets dedicated to the Jugendstil architectural style, displaying a color palette reminiscent of Anderson’s Moonrise Kingdom. Others of a similar architectural style seem to feature all the shades of yellow of his Hotel Chevalier. No Wes Anderson fans will ever tire of looking at the fanciful buildings, especially when they are covered with snow. 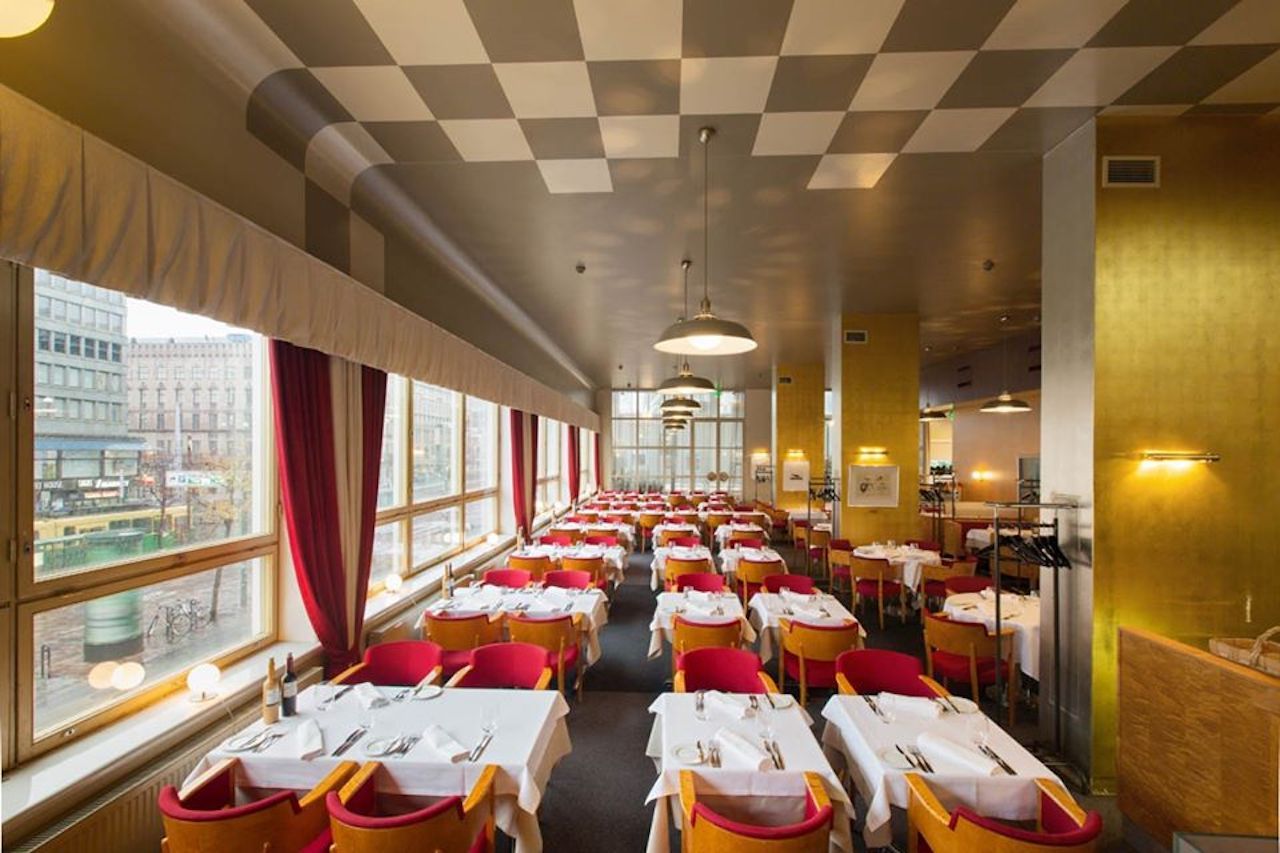 Lasipalatsi, the locally beloved 1930s functionalist building also known as the Glass Palace, is eye candy from all angles. But of the many Wes Anderson-like shots in the complex, the best is the Lasipalatsi Restaurant. Finnish families have for decades dined here when the occasion calls for something big to celebrate. Enjoy the streamlined 1930s aesthetic with red upholstered chairs and a curved, checkered ceiling. 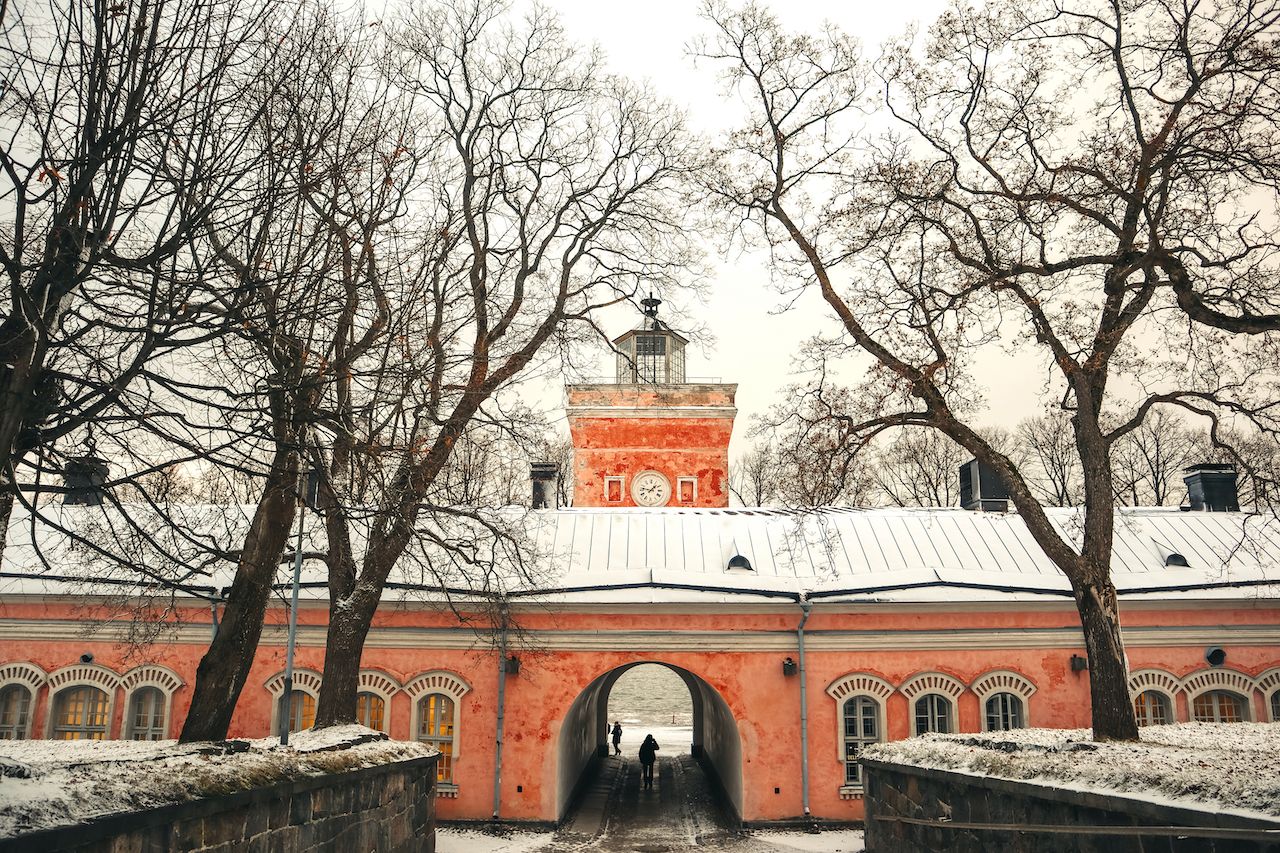 Take a short, 15-minute ferry ride to Suomenlinna Island and go through the pastel pink Vaasa Barracks and its arched entrance to the Sea Fortress, which looks like it belongs to The Grand Budapest Hotel. This fortress was controlled at points by Russia and Sweden and now is a favorite city excursion for both visitors and locals who want to spend the day on the island’s sandy beaches.