For most of us, surfing means catching a wave, standing up, and maybe doing a few turns. It requires a board between five and 11 feet long, as well as often endless waiting for the perfect combination of tide, swell, and wind. Stand-up paddling has made it easier to catch small waves by adding the power of the paddle and the momentum of a big, heavy board to the wave-riding equation.

Still, with exceptions like the Eisbach river in Munich, you can only surf on select stretches of coastline that actually have waves. That is until foil surfing came along to turn all that on its head and make “surfing” possible in unexpected places. If you’ve never heard of foil surfing, you’re certainly not alone. Even many surfing aficionados have never heard of this weird twist on the sport, let alone tried it — but it has actually existed for quite some time. Here’s everything you need to know before you try it yourself.

How does it work?

A hybrid of surfing and hydrofoil technology, foil surfing replaces the traditional fin at the bottom of a surfboard with a much longer, hydrodynamically designed fin called a blade. That blade is longer than the fin on an average surfboard and has wings at its base.

When the board moves forward, the wings lift the board out of the water, revealing much of the blade, as well. Foil surfers literally glide above the surface and can perform tighter turns due to the smaller surface area in contact with the water. 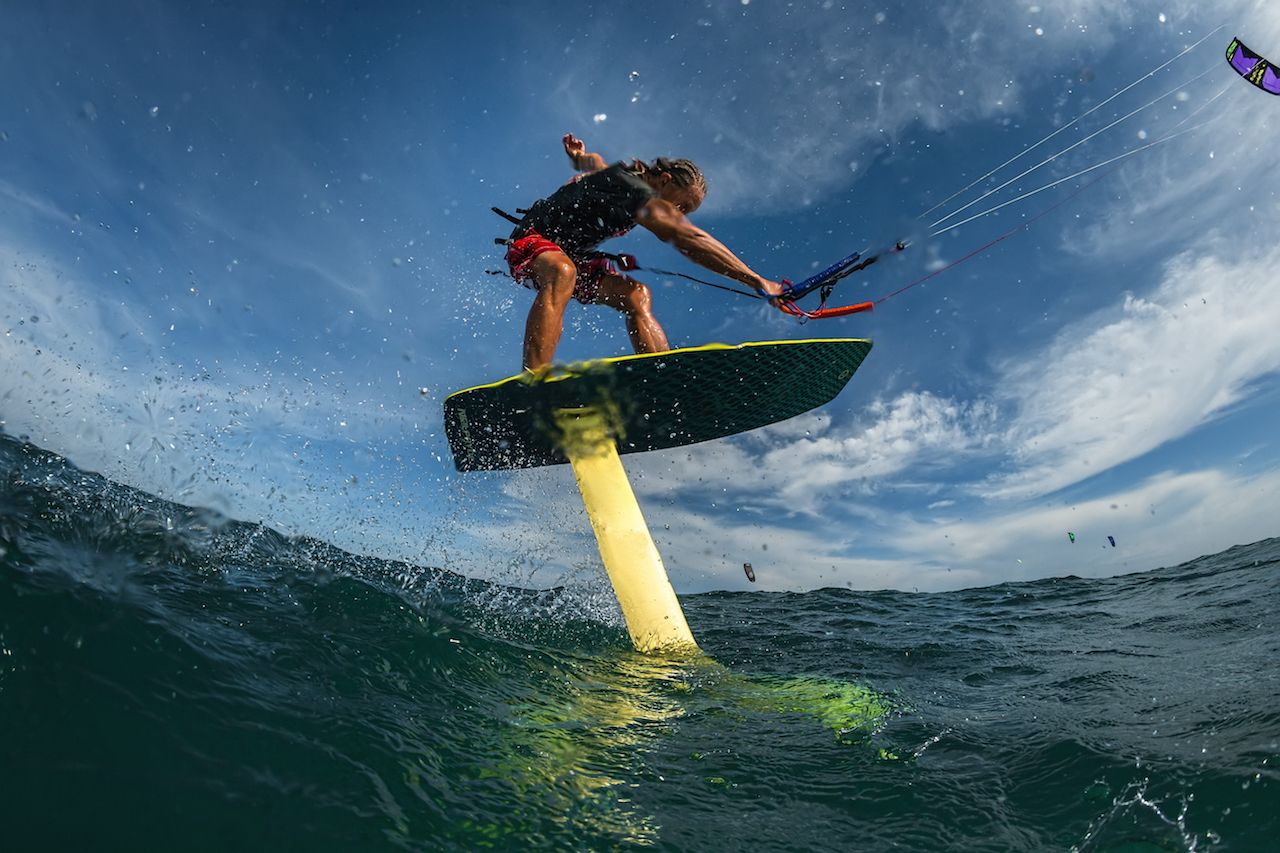 Maui-based big-wave surfer Laird Hamilton, said to have been the first surfer to use a jet ski to get towed into monster-sized waves, is also credited with first using a foil board to tow in behind a jet ski. Maui was also the birthplace of kiteboarding, and soon kitesurfers took up foil boards to make the kiting experience much smoother — since the wind that makes kiteboarding possible can also make the water extremely choppy.

Along the way, regular surfers figured out that foil boards harness a lot more of the ocean’s energy than regular boards, and they don’t lose that energy to the friction that happens when a board is in contact with the water. Moreover, the boards can literally be pumped up and down to generate more energy, sort of like how pumping your legs on a swing generates more back and forth energy.

Neither foil surfing’s extra maneuverability nor the novelty of gliding above the water are its main selling points (though Hamilton has said it “feels like flying”). Rather, it’s the promise of being able to surf in places that are otherwise unsurfable. The same airplane technology that causes the board to lift out of the water also means it easily gathers enough momentum from whitewater for the rider to keep surfing in small surf, or no surf at all.

After catching a wave, it’s even possible to turn around and, still standing, ride the board away from the beach, instead of paddling out. But avoiding a tiring paddle is far from foil surfing’s only advantage when it comes to surfing the unsurfable; because foil surfing can be done almost everywhere, foil surfers can avoid crowded lineups and make the most of whatever conditions are on offer elsewhere. Skeptical? Earlier this year, Hawaiian surfer Kai Lenny caught 11 waves in a row in six minutes on a hydrofoil, breaking his own personal record. 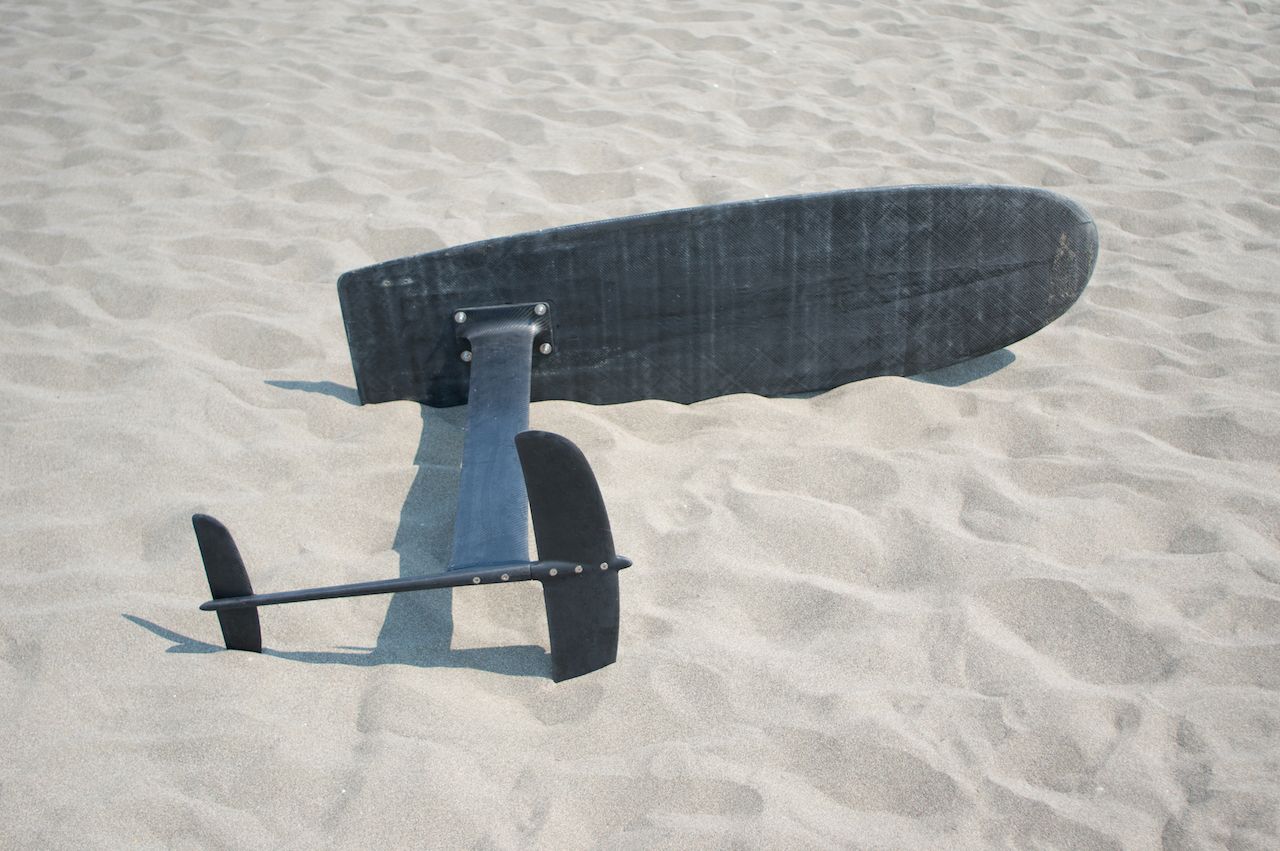 What equipment do you need?

You could try to retrofit a fin onto a regular surfboard, using a surfboard that’s relatively buoyant and ensuring it has the thickness to fit a tuttle box for the hydrofoil fin. You could also order a new hydrofoil board from a pro board-shaper like Signature Foils.

It’s not for the faint-hearted.

Like any type of surfing, foil surfing is a lot harder than it looks. Even Kelly Slater, the best surfer in history, appeared to struggle during his first time on a hydrofoil. Compared to regular surfboards, hydrofoils require an extreme level of balance, skill, and fitness just to keep the board out of the water.

Fitness and ability aren’t all foil surfers need to worry about. Foil surfing also has that sharp fin, which isn’t called a blade for nothing. Unlike the fin on a regular surfboard, the fin on a hydrofoil is massive and made of metal (as opposed to fiberglass). This combination, with sufficient momentum, transforms the fin into a highly dangerous instrument — one that’s more than capable of inflicting serious injury. In fact, experienced Japanese surfer Yu Tonbi Sumitomo discovered this in 2016 when he nearly sliced his face off while surfing his new foil board. The massive stitches stretched from his temple clear across his forehead.

This may sound like fear-mongering, but the number of people at some of the world’s busiest surf breaks makes surfing such a dangerous craft in crowded water extremely risky. Experienced foil surfers should stay away from crowded lineups and surf either on their own or in small groups. The same goes for beginners — although one look at the shorter board and lethal blade might just make small waves on an 11-foot stand-up paddleboard not look so bad, after all.

Surfing10 Mistakes Learner Surfers Make (and How To Fix Them)
Tagged
Adventure Travel Extreme Sports Surfing
What did you think of this story?
Meh
Good
Awesome