A family of beleaguered tourists has been walking behind me for several blocks. They look tired and cold, shoulders hunched and hands shoved in pockets. By the time I turn right on Baxter Street, they’re right behind me. As I reached for the wooden door at Forlini’s, an Italian restaurant in the midst of Chinatown’s bakeries, I heard a voice behind me.

“Do you know if the food is good here?” one of the men in the group asks.

I turn around, one hand on the door handle, caught off guard by the question, and slip my headphones off my ears. Clearly they’ve been looking for somewhere to eat most of the night.

“I don’t know. I usually come here just to drink,” I say. The tourists drift off, and for a moment I want to call them back, tell them to settle into one of the plush red booths under a painting of a farmer for a veal chop or fried calamari. But I also want to keep this place to myself.

First off, credit where credit is due: Two friends from graduate school who have been regulars at Forlini’s far longer than I have introduced me to the bar. First I started dropping by to meet friends for after-work drinks, then my monthly writing group started meeting there. When we found out earlier this month that the bar and restaurant would soon be sold and potentially closed, we were devastated.

Forlini’s cast a spell on me right away. It smells like an old pot of pasta left out on the stove next to a vodka soda garnished with dried out lime. The lights are low, and, incongruously, there is a disco ball hanging from the ceiling. The paintings on the walls are faux-antiques depicting pastoral scenes. When I was there in early January, there were still Christmas lights and tinsel draped on the walls. 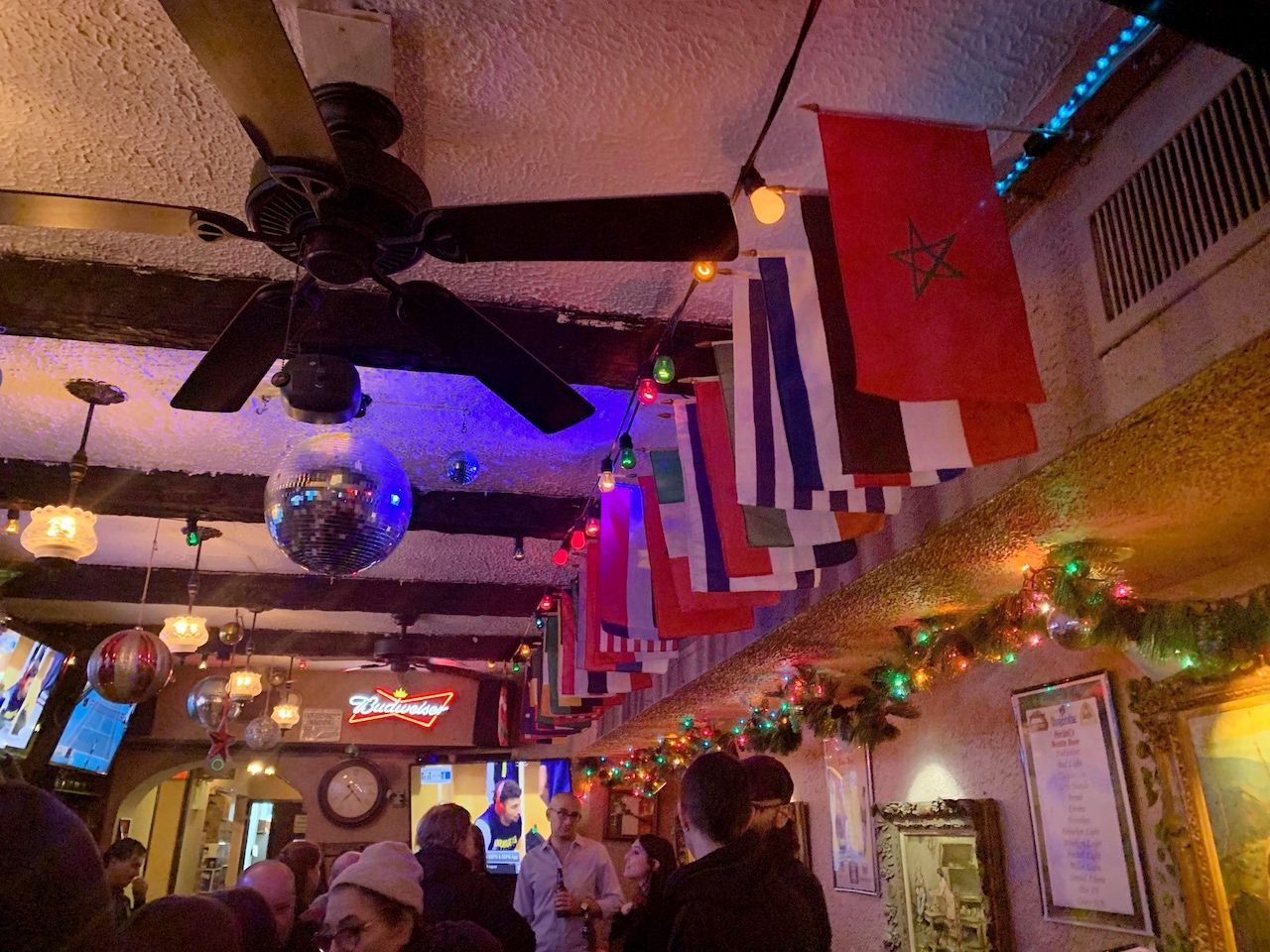 When we go up the bar, the bartender presents magnums of nondescript wine — in the white category there are three choices: sauv blanc, chardonnay, and pinot grigio — and you drink it without complaint. There’s no wine list. The bartender — who keeps his bottle opener tucked into the band of his pleated slacks like a pocket knife — once laughed at me when I asked for rosé.

It’s not just an unfussy and simple way to run your bar. It’s also a reminder of the purpose of Forlini’s. Its mission statement if you will: This is not a place to show off your fancy wine knowledge or your designer outfit. You go there to gather with friends in a judgment-free zone, plain and simple. My friends and I sit at the same booth eating cheese fries doused in salty gravy, and our laughter, and sometimes our tears, fills up the room.

I moved to New York City in 2009 when I was 19 years old. It’s not my place to lament a bygone version of the city that is now overrun by Whole Foods and Soul Cycle. Yes, sometimes hanging out at Forlini’s does feel like I’m violating someone else’s space — the people who understand New York better than I do and who have loved it longer — so there is an unspoken etiquette at the bar. Tip well, don’t demand too much of the busy bartender, be polite to the locals, and don’t take up too much space. Maybe Forlini’s — which has been open since 1943 — is a relic of New York City before it became so expensive and image-obsessed that it pushed out the long-time residents in favor of transplants with comfortable, corporate jobs. But that’s not why I love this bar. 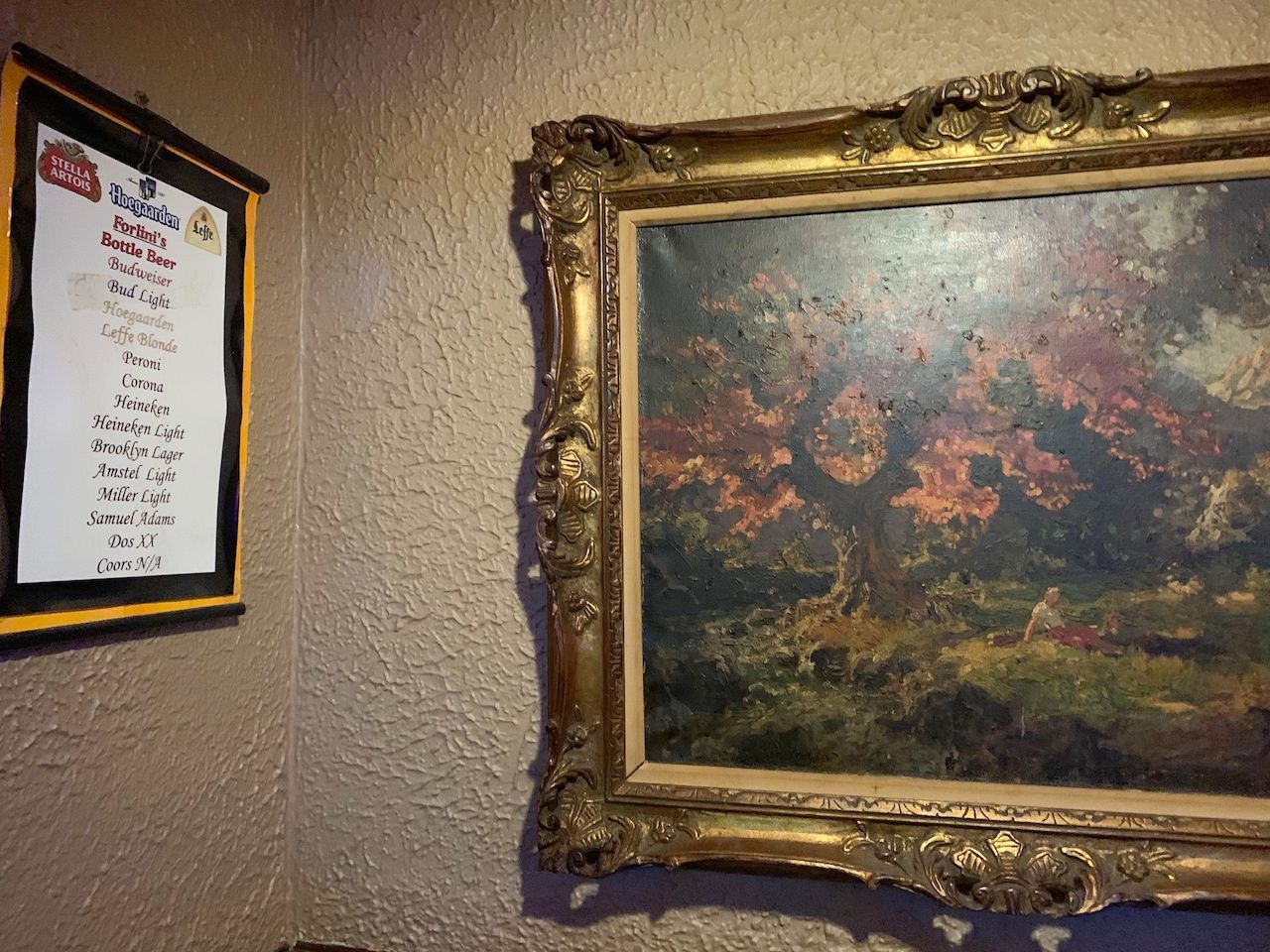 Forlini’s makes me feel welcome and comfortable. It’s home to characters who make this city feel like a dynamic, vibrant, living thing that’s complex and full of contradictions. The world flags hanging from the wall recognize that there is space for everyone here — millennials in beanies and puffer jackets and the veteran of WWII who still wears his silver personalized USMC ring. I never got his name, but when I met him, he told me stories about drinking in Manhattan as a marine, staying out all night, and then sneaking onto the battleship on which he served, still a little drunk.

A night at Forlini’s guarantees encountering people that are so much more intriguing and mysterious than anyone in a movie about the city: The husky-voiced women wearing sparkly tops and strapping heels waiting in line with me for the bathroom, vacuously complaining about the smell of fish in Chinatown. Later, they lit sparklers in the adjoining dining room. There was the beefy guy sporting a buzzcut and windbreaker who overheard my friend talking about the medication she takes to focus and dropped a napkin on our table with a handwritten note explaining that he needed help buying drugs. We later decided he was an undercover cop. Or the guy sitting at the bar watching a video of strippers in what looked like a Las Vegas nightclub. If you pay attention, you might witness a thousand tiny stories unfolding all at once at Forlini’s on any given night.

These people remind me that I am a guest in this space. A welcome guest, but a guest nonetheless, allowed to politely observe. This is not a space that belongs to me, that I need to conquer or claim as my own. It belongs to our city — eccentric, chaotic, and diverse. There is so much mythology surrounding a supposedly authentic New York, but the people that populate this fast-disappearing Atlantis-like city are still here. They aren’t stereotypes or tropes or creatures to gawk at with amazement, like some endangered species at the zoo. They are real people, and they drink at Forlini’s. If Forlini’s does close, the fact that I got to play some small part in all the new stories unfolding in its booths, to be privy to just a fraction of the secrets and the faces that pass through this bar, feels like a privilege.

Looking back, I wonder if I was perhaps lying to those tourists. I don’t just go to Forlini’s to drink. I go there to commune with New York City, to spill my guts, tell all my secrets, and walk out the doors absolved.