Today’s solo female travel movement — the subject of so many articles, books, and blogs, the inspiration for so many trips and lifestyles — can trace its roots in America back to two people: Nellie Bly and Elizabeth Bisland.

Bly and Bisland were New York-based reporters in the late 1880s, at a time when American women had still not been granted the right to vote. Women in the field of journalism in this era had a particularly difficult time — most publications would not hire them unless it was to write about “women’s issues,” like housekeeping and fashion. They were paid substantially less than men and were rarely given good assignments. They were certainly not sent out on location or into potentially fraught reporting situations, as editors rationalized that it would be irresponsible to put women in harm’s way.

Out of this muck rose Nellie Bly and Elizabeth Bisland. Both, in the span of a few short months, would become nationally famous as travelers — or, to be more specific, as “globe-girdlers”: circumnavigators of the planet.

Nellie Bly was born Elizabeth Jane Cochran in a suburb of Pittsburgh. Her family was solidly working class, and for much of her teenage years, she was forced to work in menial jobs to help keep the family afloat after her father died. When she was 16, she penned an angry letter to the local newspaper, which had just published an editorial titled “What girls are good for,” suggesting that the answer was “housework and birthing babies.” Her response so impressed the editor of the paper that he offered her a job. She took on the pen name Nellie Bly, as it was considered improper for a woman to write under her own name.

At the start, she went undercover to report on the conditions working women had to deal with in factories, but upon receiving complaints about her writing, she was pigeonholed as a women’s writer, which Bly chafed against. She managed to talk the editor instead into reassigning her to the Mexico bureau. He refused unless she was accompanied by a chaperone, and so she took her mother. Her reporting was groundbreaking, and she did a lot to smash American stereotypes about Mexicans. But after six months, she was driven out of the country when she began speaking out against the government’s suppression of the free press.

Upon returning, she decided to move to New York to work for one of the big papers. She eventually talked an editor into giving her an undercover reporting gig for Joseph Pulitzer’s New York World. The idea was that she would feign insanity in order to be incarcerated at a women’s lunatic asylum so she could expose the horrible, dehumanizing practices there. Her report so appalled the public that it forced major reforms in the mental health community, and Bly became a star reporter. She went on to uncover a statewide corruption ring, she unmasked a Central Park sexual predator who had paid off the police to look the other way, and, at one point, she even managed to buy a baby while uncovering the city’s underground slave trade. 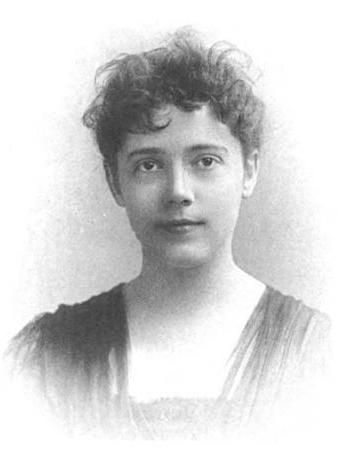 Elizabeth Bisland
Photo: A Flying Trip Around the World

Elizabeth Bisland was, in many ways, Bly’s opposite. She was born into a Louisiana slave-owning family that was ruined by the Civil War, and she began writing poetry from an early age. When she caught the attention of local intellectuals, she moved to New Orleans, where she became well-known as an educated woman and a socialite. In her early 20s, she decided to move to New York to pursue a writing career.

Unlike Bly, Bisland preferred not to put herself at the center of her stories, and instead, lived a quiet life as a literary type. She was still remarkably progressive for a woman of the slave-owning south, but was more upper class than Nellie Bly, and did not engage in muckraking.

The race around the world 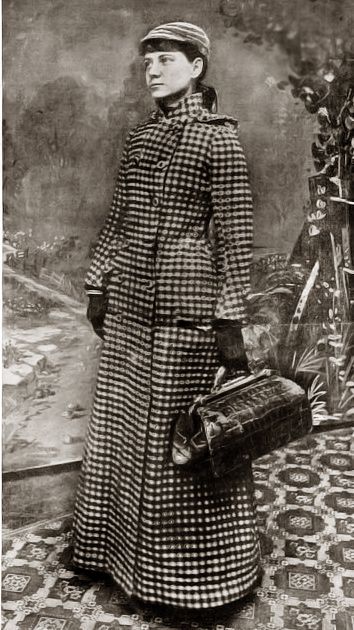 In 1888, Bly pitched an idea to her editor: he should let her travel around the world to see if she could beat Phileas Fogg’s record from Jules Verne’s famous 1873 novel, Around the World in 80 Days. Her editor dismissed the idea out of hand — the thought of sending a woman unaccompanied around the world was, he believed, downright irresponsible, and he suggested she would not be able to pack lightly enough to move fast.

She managed to browbeat the editor into at least conceding that, if they did send a reporter on such a trip, it would be her. They left it there. And then a year later, several well-known travelers began approaching the World to see if they would fund such a trip. The editor realized that, if they didn’t sponsor the trip, another paper would beat them to it, and, true to his word, he told Bly she was to prepare for the trip. In defiance of the editor’s “women can’t travel light” expectations, Bly packed a single bag, saying, “If one is traveling simply for the sake of traveling and not for the purpose of impressing fellow travelers, the problem of baggage becomes a very simple one.”

In November of 1889, Bly set off to much fanfare in the World. That morning, the editor of The Cosmopolitan, a monthly magazine, read about Bly’s trip in the world and decided he could piggyback off of the publicity if he sent a female reporter in the other direction. Bly’s route, he reasoned, would be slowed by her choice of traveling east-to-west, as she would hit headwinds in the South China Sea. So he called Elizabeth Bisland to his office and asked her to leave that evening for her own trip. Bisland was not initially interested, but she was persuaded — though threats likely had a good amount to do with that. Nine hours after Bly’s ship left Hoboken, New Jersey, Bisland got on a train heading west across America, and the race was on.

Around the world in 72 days

Jules Verne is widely considered to be the world’s first science fiction writer. He wrote Around the World in 80 Days to try and demonstrate that, with new technology like the steamship and the train, it was possible to circumnavigate the world in an amount of time that was previously unheard of. 80 days, he figured, was almost absurdly fast — circumnavigation a mere few decades before was a years-long affair.

Bly and Bisland’s journey was, by the standards of the time, so blindingly fast that they barely had time to see the world as it zipped by. Bly’s ship landed in Southampton, England, and she immediately had to catch a train to London and then a train to France, where she managed, for an afternoon, to meet with Verne himself. But from there, she had to zip across Europe, across the Mediterranean, through the Suez Canal and the Gulf Aden to Colombo in what is now known as Sri Lanka. From there she sped to Penang, to Singapore, to Hong Kong, to Yokohama, Japan, across the Pacific to San Francisco, and then a high-speed train trip across the US. The longest stretch Bly spent anywhere was in Hong Kong, where she was stuck for 5 days waiting for her boat.

The two had very different takes on the world — Bly was more interested in the speed of her trip than Bisland was, and was extremely defensive of the United States. She despised the British Empire, which she grumbled controlled all of the bits of the world that were worth owning, and she tried to pick fights over whether the Stars and Stripes was a more beautiful flag than the Union Jack. In Matthew Goodman’s book on Bly and Bisland, Eighty Days, he writes, “As she traveled among the English, Nellie Bly was becoming increasingly conscious of the peculiar privilege that imperial power conferred upon its citizens: the privilege of insensitivity. They could if they chose to, carry the empire along with them on their travels, as they sailed on English ships, slept in English hotels, ate English meals, taking little notice of the specific characteristics of the countries through which they passed.” It particularly galled Bly, who had chosen to not learn any other language so as to see how far English could get an American around the world, to find that she was piggybacking on British Imperial dominance. Her American dollars weren’t accepted anywhere — British pounds were accepted everywhere.

Bly also had an outspoken, brash personality, and was extremely competitive — she did not find out that she was even engaged in a race against Bisland until she reached Hong Kong, but she spent much of the rest of the trip in anxiety about whether she’d win the race, and would lie to the press about Bisland’s supposed attempts to sabotage her trip.

Bisland, on the other hand, was not interested in self-promotion, but found that she adored travel, and was deeply impressed by the British. The stratified class society reminded her of the old American South, and she found herself gravitating to the English wherever she went. She did not pack light, and was less interested in the competitive aspect than Bly. And, unlike Bly, her trip appears to have actually been sabotaged; in France, a mysterious man claiming to be a travel agent informed her that the ship she was supposed to catch hadn’t waited for her (even though it had) forcing her to change her route and lose time.

Bly won by about 4 days, getting off the train in Hoboken, New Jersey to a massive crowd and immediate national celebrity. Bisland came in to a much smaller crowd a few days later, and would never, to her pleasure, achieve Bly’s notoriety. The two, for a few months, were the fastest people to have ever circled the earth.

Bly’s fame hobbled her career. It is impossible, after all, to be an undercover reporter when your face is known to virtually everyone. While coverage of her journey gave The World its highest circulation numbers ever, she was never compensated for it financially, and she was forced to live off of book earnings and a lecture tour. She slipped into a depression, and never managed to return to that level of fame, but still advocated for workers’ rights and the poor for the rest of her life.

Bisland initially returned to her quiet life at The Cosmopolitan but found she’d been bit by the travel bug, so she returned to the United Kingdom, where she’d barely spent any time on her earlier trip, and there, she met her husband. The two would become prolific travelers, and they would hit many of the places she’d gone on her initial trip, albeit at a slower pace.

Much has changed since Bly and Bisland’s race, and much hasn’t: travel has become almost impossibly faster than it was 130 years ago, and, with social media, even more public. But solo female travelers still have to hear snide comments about packing and condescending remarks about safety. The famous women travelers now are known as “influencers,” and still must weather both the admiration and judgment of the society that follows their travels. But, as Bly and Bisland both realized at the end of their journey, it is the travel that matters, not the publicity that comes with it. You may be judged for what you do, but you do it anyway.

Female Travel8 Badass Female World Record-Breakers Who Proved Women Can Do Anything
Tagged
Female Travel Solo Travel
What did you think of this story?
Meh
Good
Awesome