When it comes to where French people vacation, why would they feel the need to go anywhere else when there are more than 2,600 beautiful beaches and over 3,400 miles of coastlines just a car ride or train trip away? While the summer exodus of French people from cities to seaside towns means that Paris is empty for all the foreign tourists to enjoy in peace, visitors would be remiss not to leave the Louvre behind to test out the water and enjoy some sun tanning sessions on the most popular French beaches.

As well as being some of the most beloved destinations in France, the following French beaches have all been awarded the Pavillion Bleu (Bleu Flag) certification, guaranteeing a high level of cleanliness, accessibility, safety, and environmental protection. That does not mean, however, that these French beaches are tranquil — most are very busy in July and August. For a more peaceful beach session, visit in June and September.

The best French beaches in Normandy 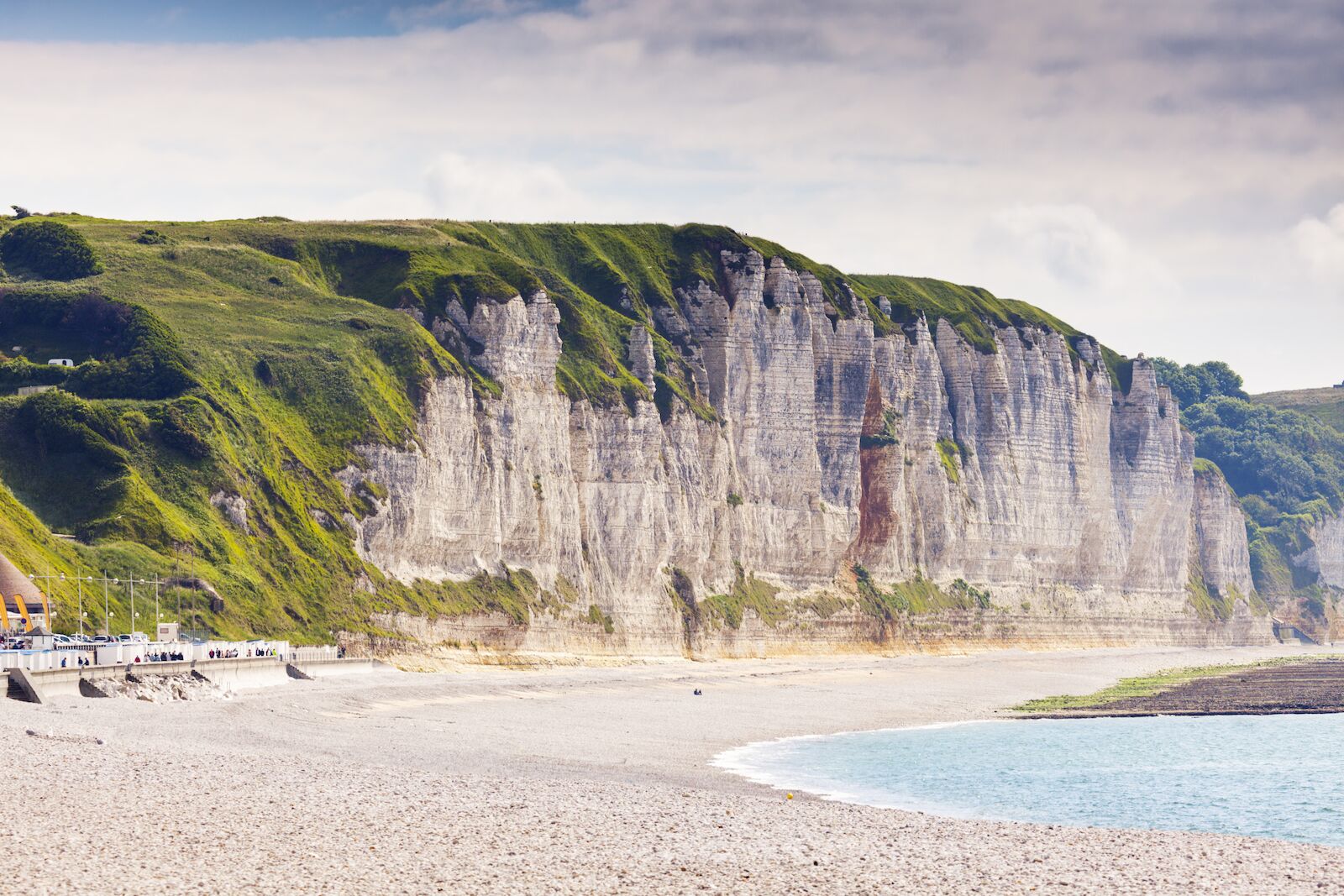 The appeal of Fécamp Beach is the view of the dramatic white-chalk cliffs that you have from your towel. While not as iconic as the vista you’d get from Etretat Beach featuring the famous arch, Fécamp Beach was, unlike Etretat, awarded the Pavillon Bleu certification this year, making it a better place to enjoy the English Channel. And Etretat is only 25 minutes away by car, so you can easily go to see the famous arch when motivation strikes. Cape Fagnet, in the town of Fécamp, is one of the best viewpoints in the area to see the majestic cliff coast, so stop by after your day at the beach to see the area’s natural beauty from up high.

Note that Fécamp Beach is a pebble beach, so set your towel not too far from the water’s edge so your feet won’t suffer. 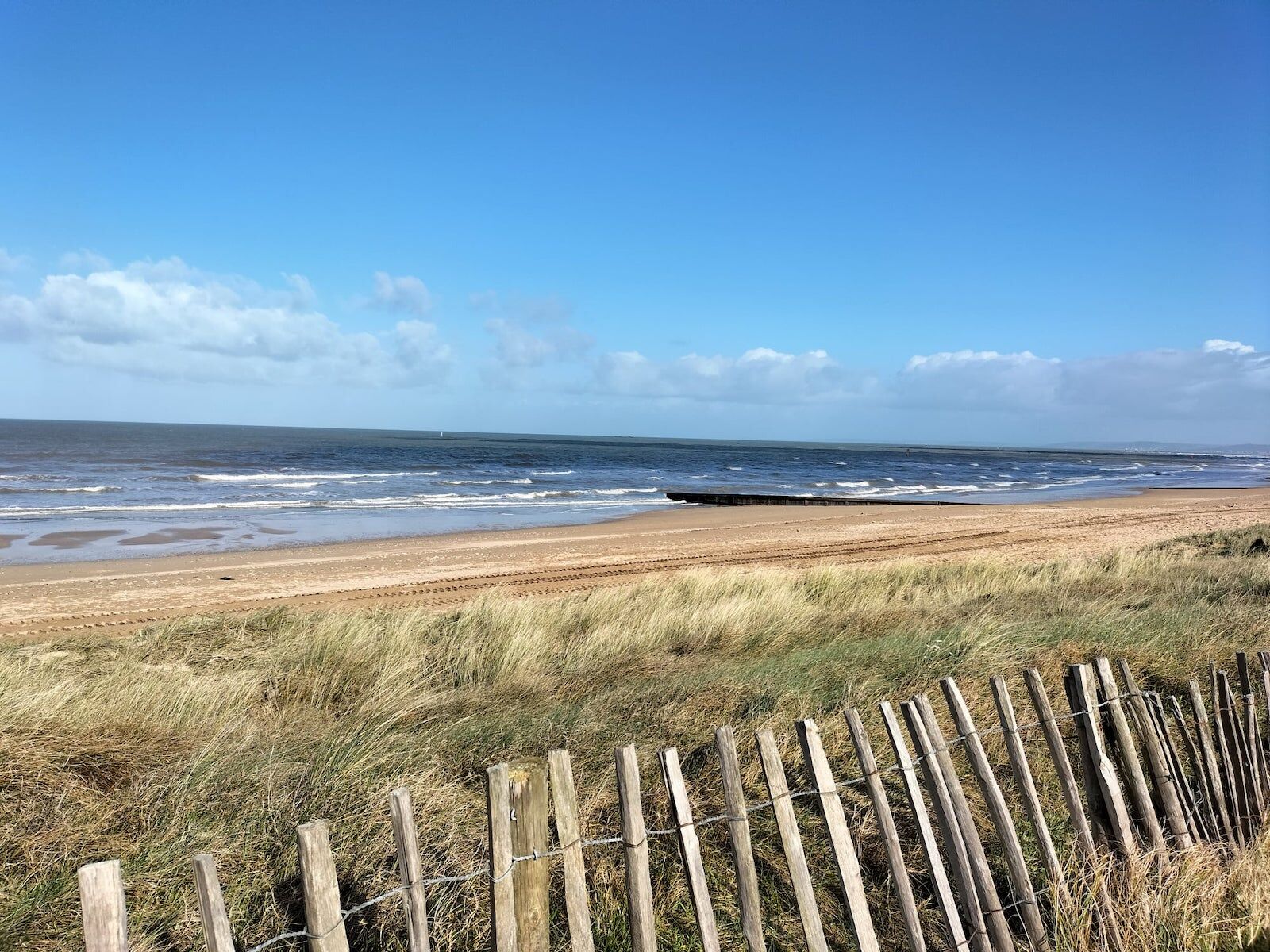 Deauville and Trouville-sur-Mer are the Normandy beaches favored by chic Parisians on weekend getaways, but who wants ritz and glamor when they can have World War II history instead?

Colleville Beach is so peaceful and scenic that you’d never know it was one of the sites of the Normandy landings on June 6, 1944. Colleville Beach is located about 10 minutes by car from Sword Beach; about 20 minutes from Juno Beach and the Juno Beach Center; and less than one hour from Omaha Beach, the Overlord Museum, and the Normandy American Cemetery. While in the small town of Colleville-Montgomery, visit the Hillman Fortress, a complex of German bunkers built in 1942. If you want to visit the sites of the Normandy landings more extensively, check out Matador Network’s guide for a D-Day tour of the region.

Colleville Beach is 2,000 feet long, covered in fine sand, and flanked with a natural dune carpeted in vegetation. The beach has lifeguards throughout the summer months from 11:30 AM to 8:30 PM and is suitable for those who wish to sunbathe, swim, or indulge in some water sports. The lifeguard post also has all the equipment necessary for people with disabilities to be able to access the beach and swim. The beach has been awarded the Pavillon Bleu certification for 21 years in a row.

The best French beaches on the Atlantic coast 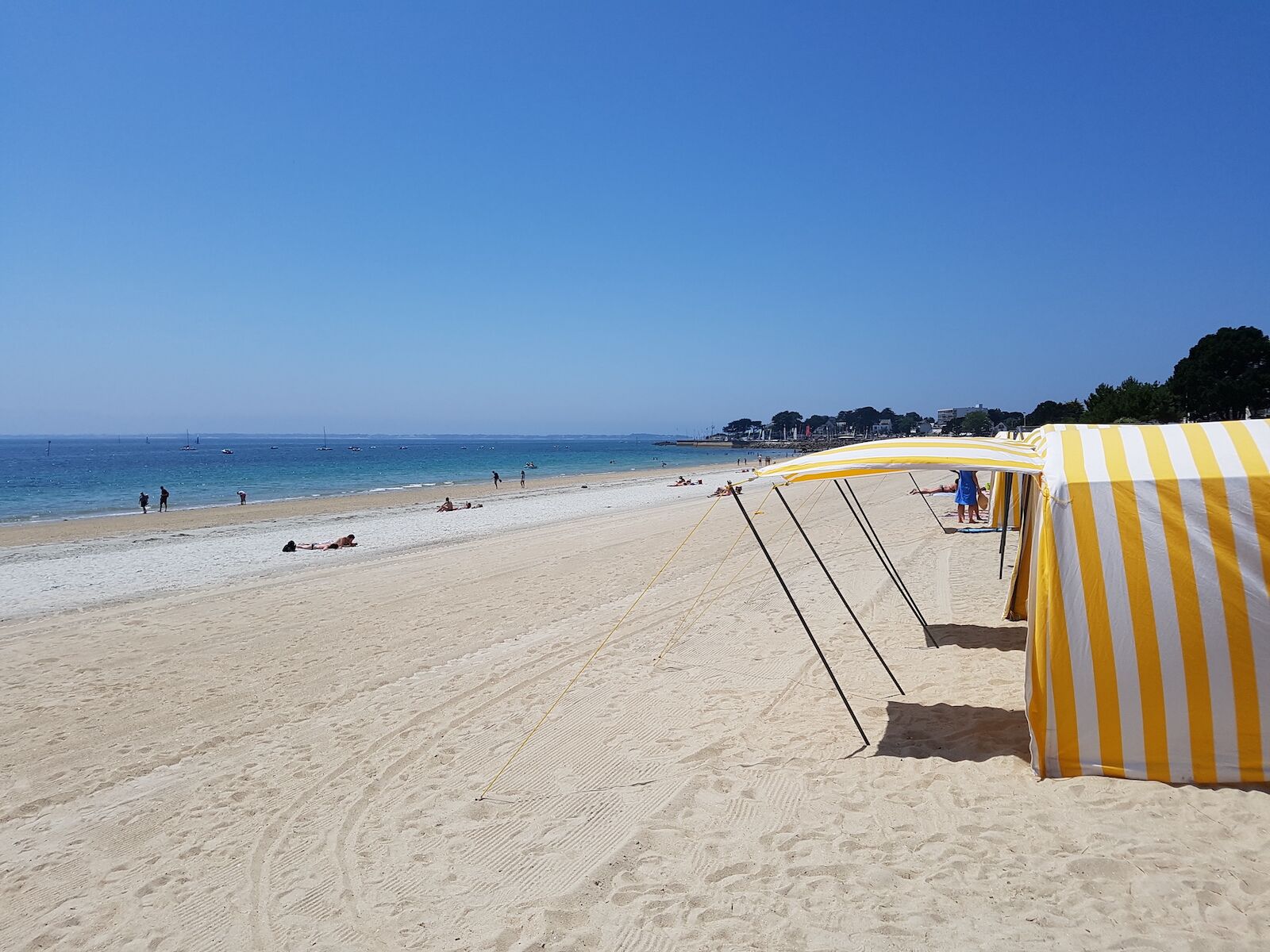 La Grande Plage de Carnac (Carnac’s Large Beach) is right in the heart of the town and is therefore the most easily accessible of the five beaches to be found in the area. With its 1.2 miles of fine sand and its clear waters, it’s a great place for everyone to swim safely. The beach has lifeguards throughout the summer and is accessible for those with reduced mobility.

Once you’ve spent the day at the beach, wander the lovely streets of Carnac and pop into the independent shops for trendy clothing, books, or souvenirs. The Diana Hotel that faces the beach is a great place for a gourmet ice cream or a refreshing cocktail. If you prefer to take a walk, follow the promenade along the coast and admire the beautiful historical properties that face the ocean.

Just make sure you don’t spend all your time at the beach. Carnac is most famous for being home to the largest gathering of enigmatic sanding stones dating back 7,000 years. The impressive megalithic alignments are a sight to see so grab a map at the tourist office and walk the trails around the 3,000 stones. 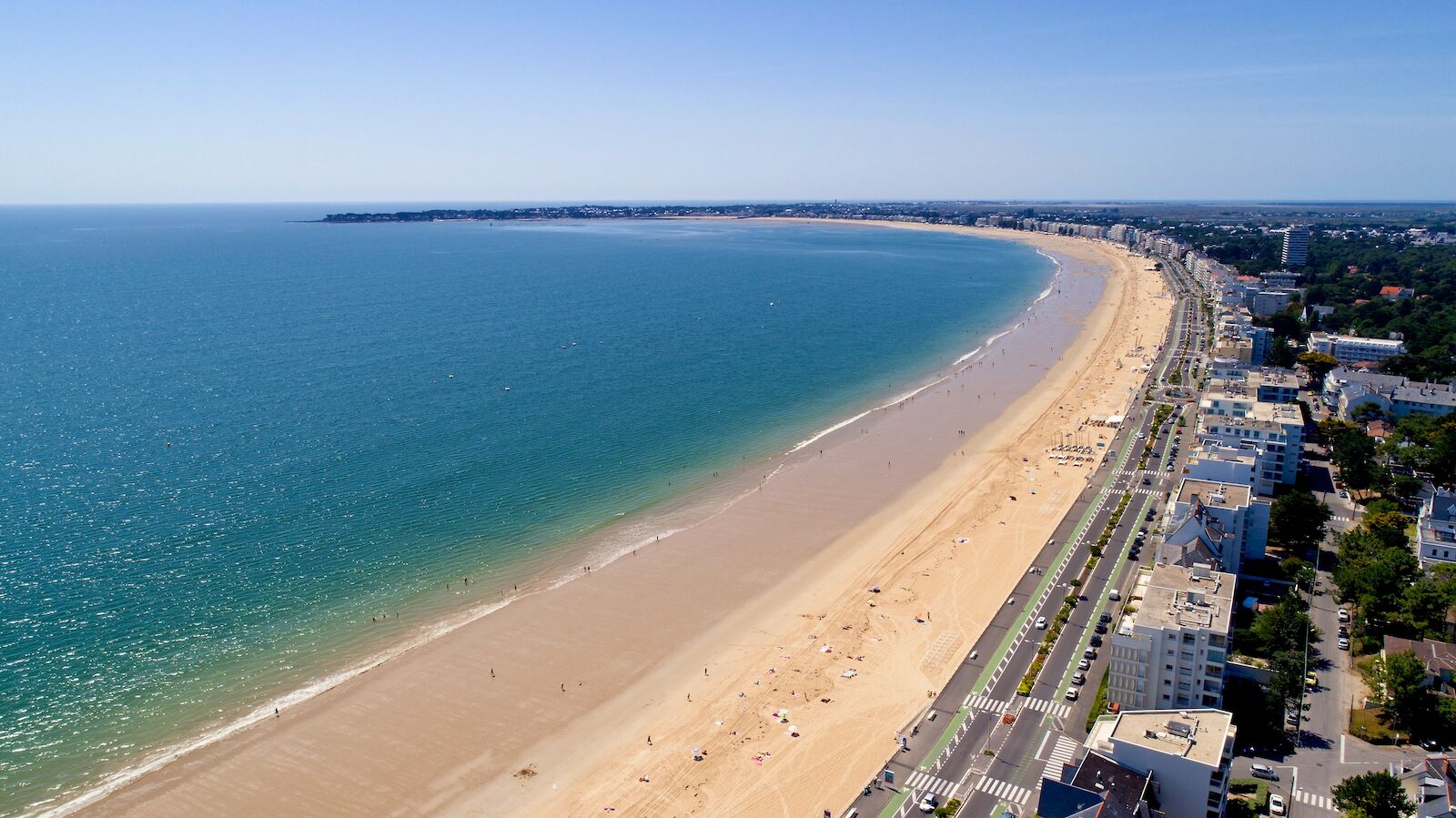 One of the longest beaches in Europe, the La Baule Bay is more than 5.5-mile long and encompasses three towns: Pornichet, La Baule, and Le Pouliguen. Many of the beaches along the bay have been awarded the Pavillion Bleu certification, but some are more attractive than others. For example, Benoît Beach, in front of La Baule’s famous luxury hotel L’Hermitage, has very fine white sand and shallow waters, especially at low tide, making it a safe place for families.

The area is great for shopping and trying out local treats. The Avenue de Gaulle, the coolest and fanciest street in La Baule, has a huge variety of clothing shops at a different price points, ice cream parlors (the homemade strawberry ice cream from La Fraiseraie is a must-try), and waffle and candy vendors (paying a regular visit to Manuel is a local tradition.)

La Baule Bay is extremely popular with tourists in the summer, but come the end of August and the start of September, the beaches are nearly empty and you can enjoy miles of sand with very few people around. 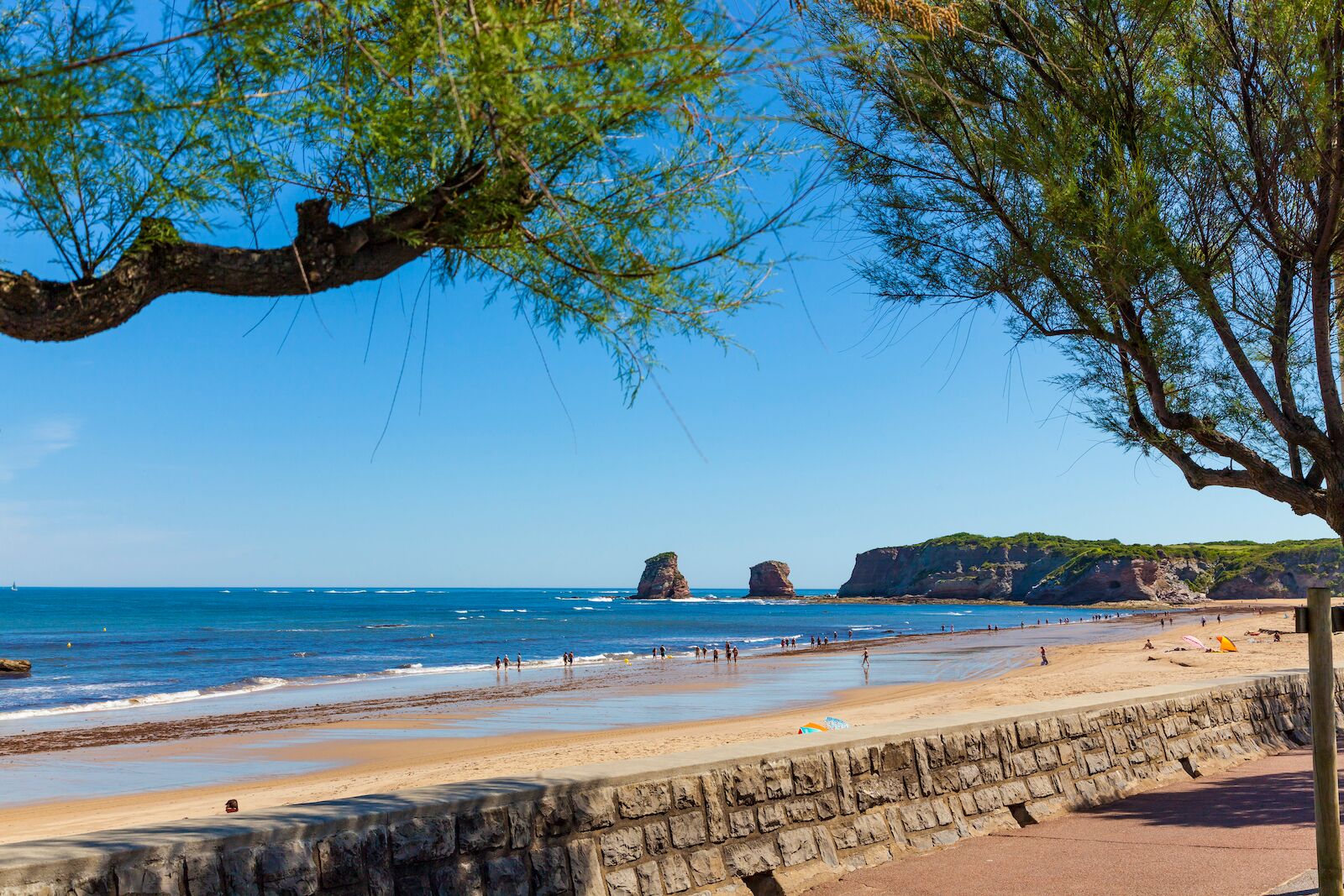 The Deux Jumeaux Beach is a very scenic spot to swim, sunbathe, and learn how to surf. The beach has lifeguards throughout the summer so those who want to test out the warm waters (the temperature can reach 73 degrees) can do so safely. While the section of the beach nearest the cliffs was dedicated to those who enjoy the seaside in the nude, unfortunately the practice was banned in 2021. That said, note that anyone can go topless on most French beaches.

For great views of this beautiful stretch of the Atlantique coast, hike the path that links the town of Saint-Jean-de-Luz to Hendaye. It’s a moderate three-hour walk, and you’ll sure have deserved a swim and a rest in the sun on the Deux Jumeaux beach afterwards.

Located at the border between France and Spain, you can easily pop down from Hendaye to San Sebastian for the day and try out Basque country’s famous food and a glass of Kalimotxo, a Basque specialty that consists of mixing wine and Coca-Cola.

The best French beaches on the Mediterranean coast

The beaches and coves of Cassis, Bouche-du-Rhône 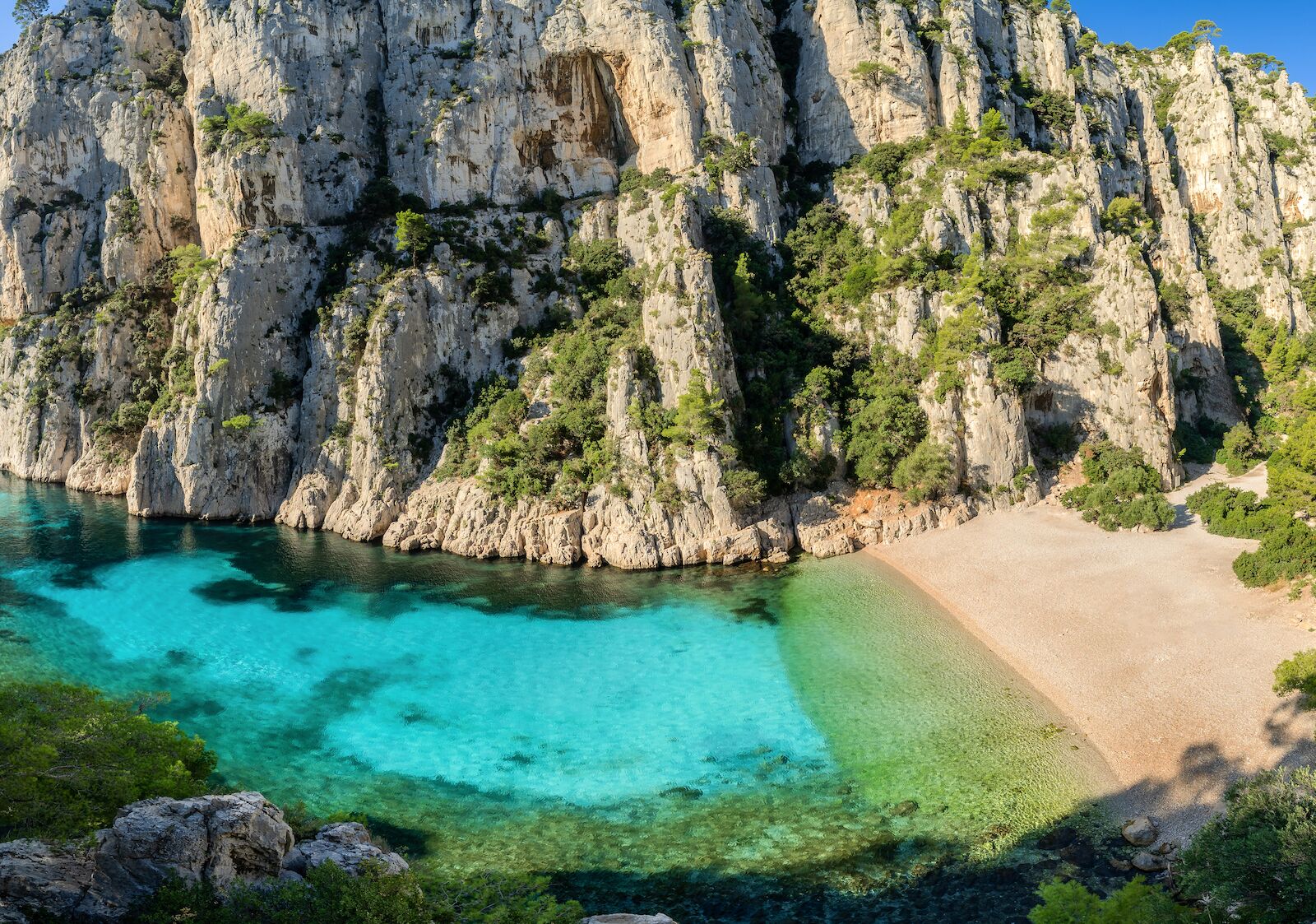 The French Mediterranean coast is packed with great beaches, including the ones on the famous French riviera in Nice, Cannes, and Saint-Tropez. But for one area that defines the beauty of the French Mediterranean coastline, it’d be the beaches and coves in and around Cassis. Two beaches in the small and pretty town of Cassis have received the Pavillon Bleu certification: Bestouan Beach and Grande Mer Beach and both are extremely scenic, although super busy in the summer. If you are able-bodied and have a car to move around, check out the coves of Cassis (known as “calanques” in this part of the world), namely Port-Pin and En-Vau. They are very popular during the summer months, but the water is so clear and the surrounding cliffs so exceptionally beautiful that it’s worth fighting for a spot on the sand. Bring your snorkel gear to the coves and look for the small marine creatures that inhabit this beautiful spot. 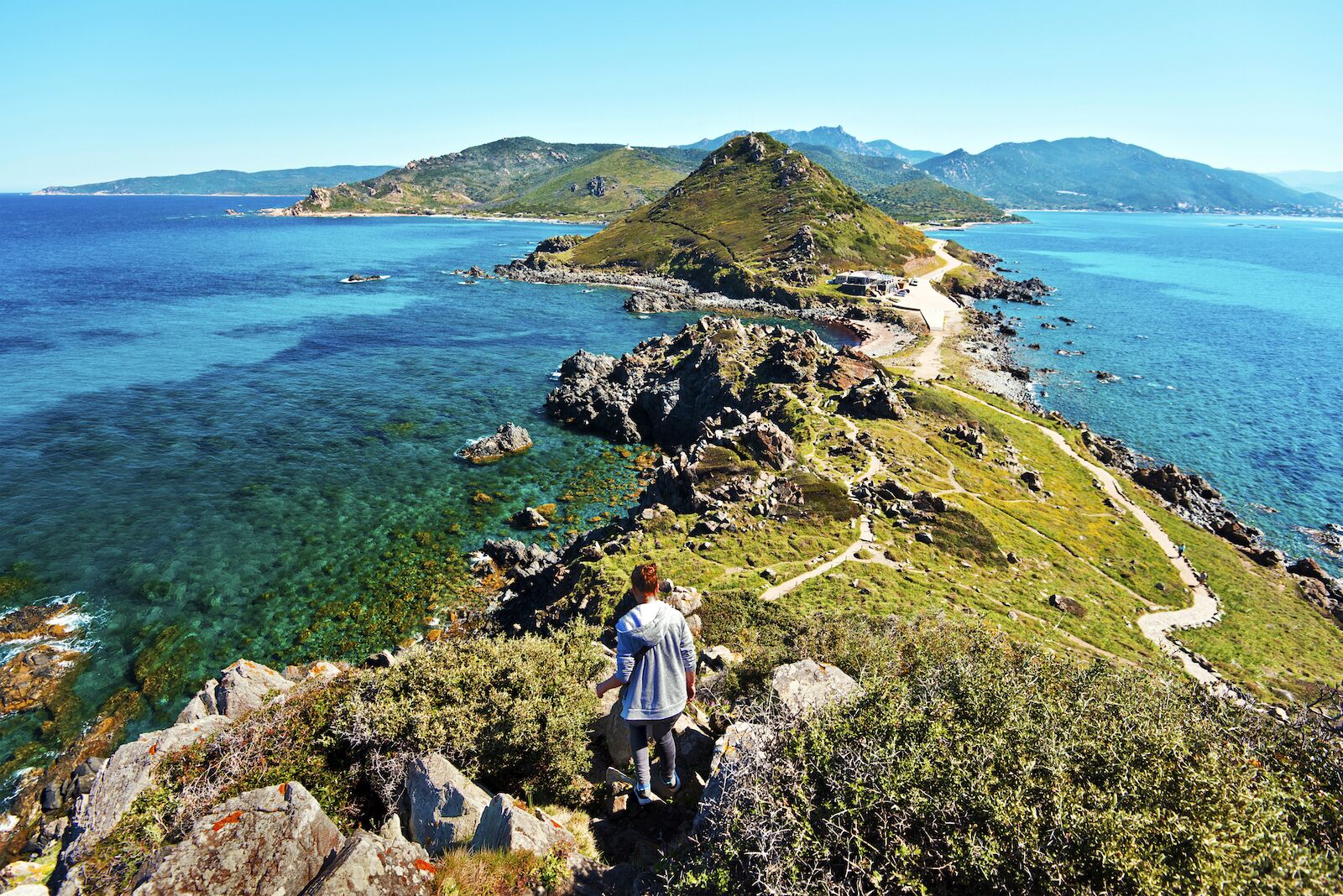 Mainland French vacationers love to fly or sail to Corsica in the summer, and for good reasons. The weather is seemingly always sunny and hot, the water is warm, and no matter where you go on the island, the scenery is stunning.

A memorial on Terre Sacrée Beach, pays tribute to the French and allied soldiers who were hurt or died during World War I. It is one of six such memorial markers in the world, five of which are in France and one in the United States. Make sure to take the time to stop by.

For those who like to work hard to earn their relaxing time at the beach, the Chemin des Crêtes (the Ridge Path), a 6.2-mile hiking path with views of the city and coastline, is accessible to all who can handle a few steep inclines and some patches of rough terrain. It starts in town and ends at Terre Sacrée Beach.

Insider Guides10 Reasons Marseille Is the Most Underrated French City
Tagged
Beaches and Islands France
What did you think of this story?
Meh
Good
Awesome