The days of the nondescript hotel-chain rooms are over. From stunning Airbnbs to quirky accommodations such as bubble hotels, lighthouses, and even underwater hotels, there are plenty of options for travelers who don’t want to spend the night in a boring, cookie-cutter room with bad art on the walls. An increasingly popular trend is staying in spiritual dwellings turned boutique hotels, from temples in Asia to renovated churches, convents, and monasteries in Europe. You don’t need to identify with the religion to enjoy your stay at these former holy places; it’s all about tranquility, stunning architecture, and a unique cultural experience. One country that has a large concentration of these converted places of worship is France; here are six beautiful French churches you can stay the night in. 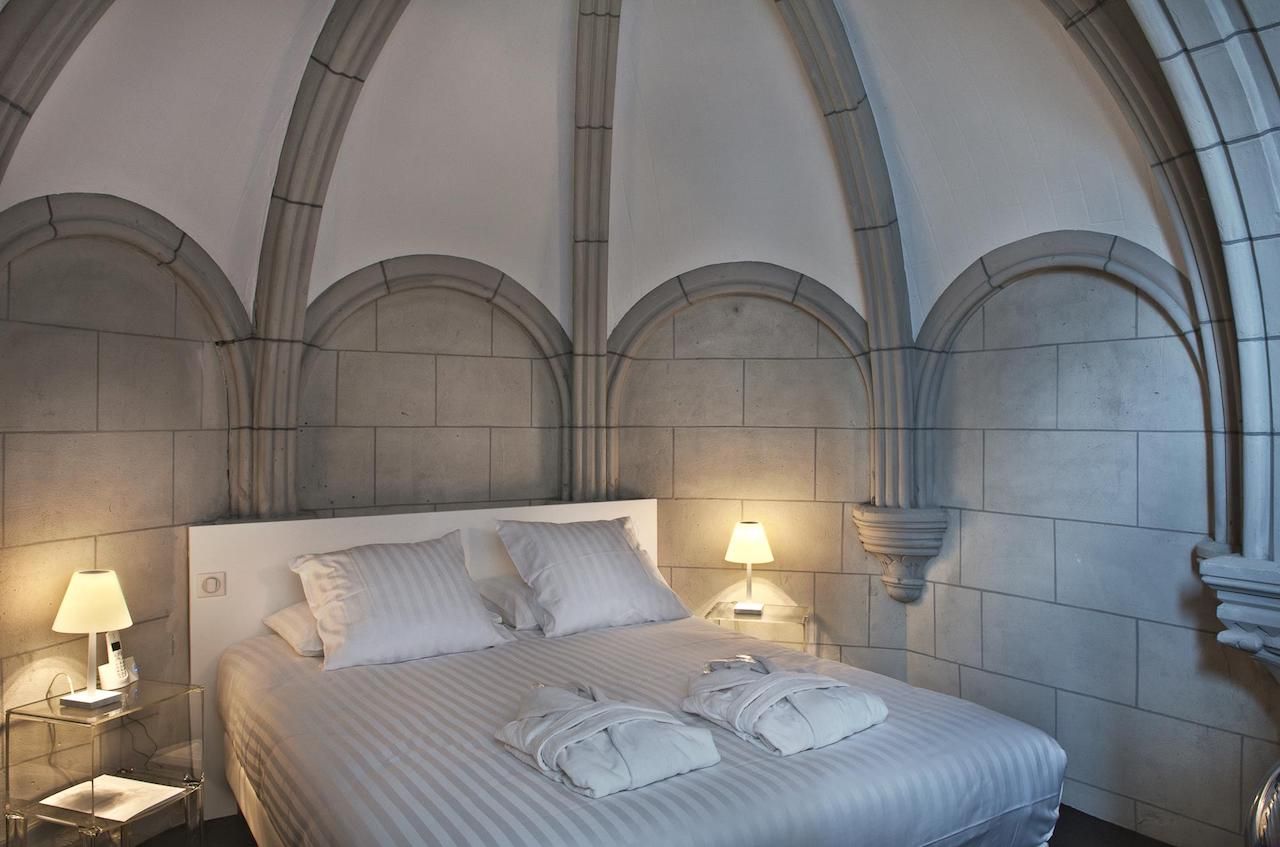 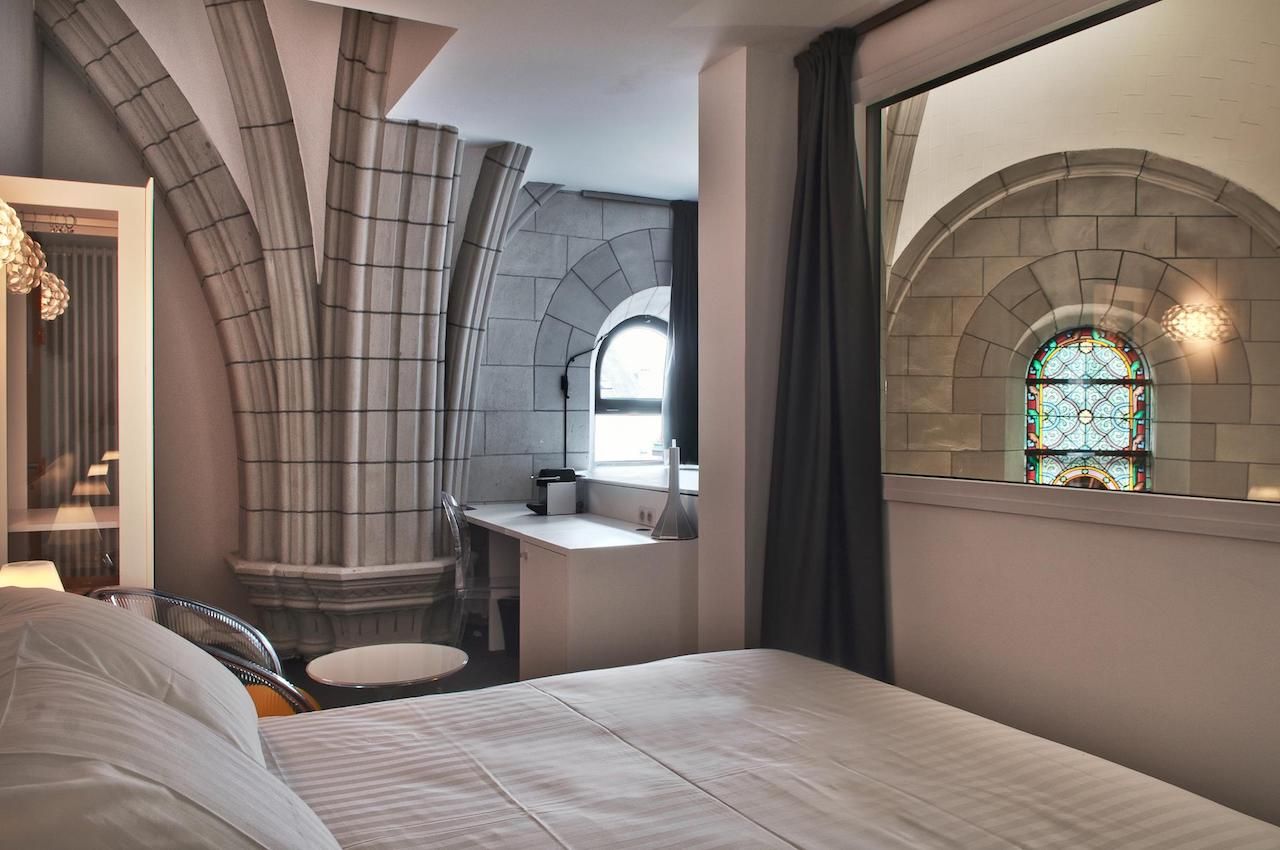 At the Sozo Hotel, a boutique hotel set in a former 19th-century chapel, you won’t complain if you have to sleep in one of the two smallest rooms — you might have less space, but there’ll be a colorful, stained-glass rose window by your bed. Not that the other 21 rooms are any worse. Six of them are located on the top floor of the hotel, closest to the vault of the original church, so stone arches hang over the beds and arched windows are the main source of light. Four other rooms have either a view of the choir stalls or are situated right under the chapel’s apse for a celestial cocoon feeling, while the 11 remaining rooms are located between the stone walls of the church, on the chapel and sacristy side of the hotel. Rooms start at $163. 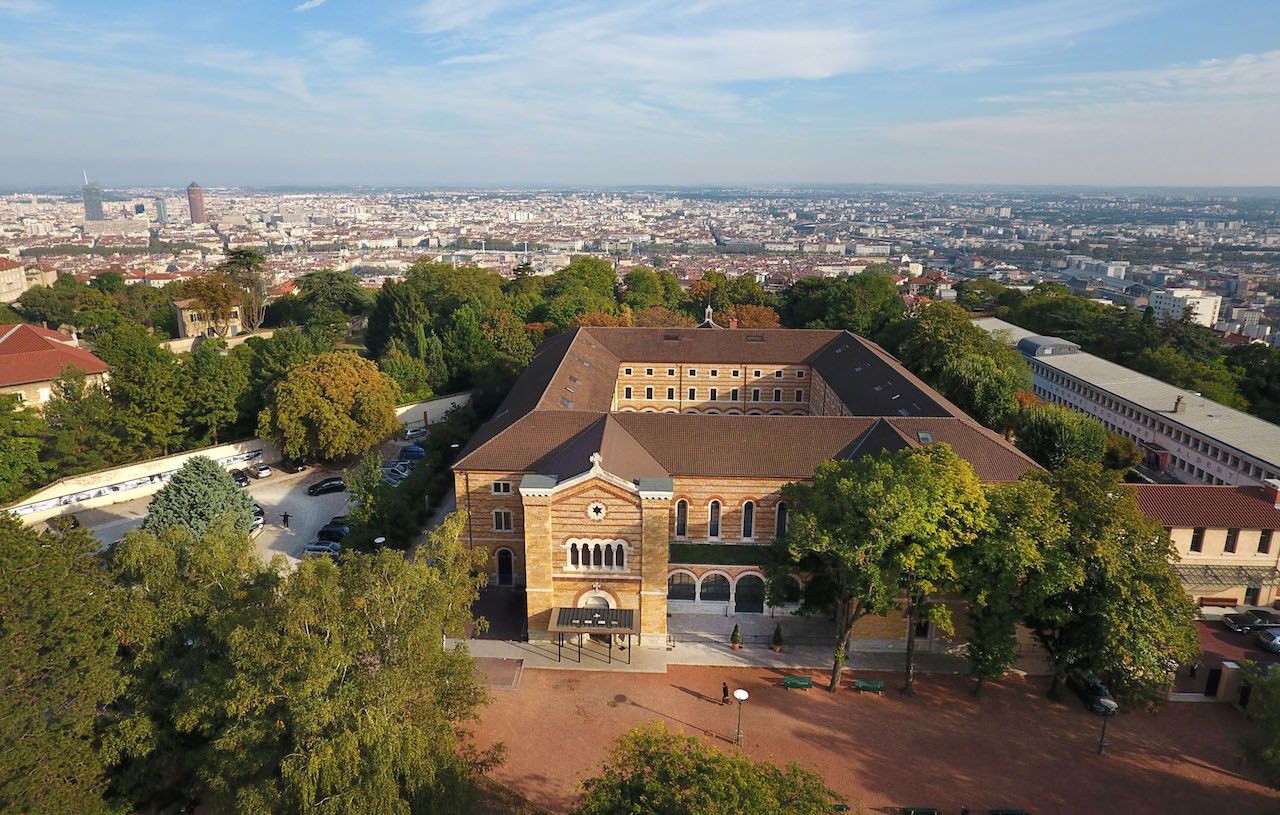 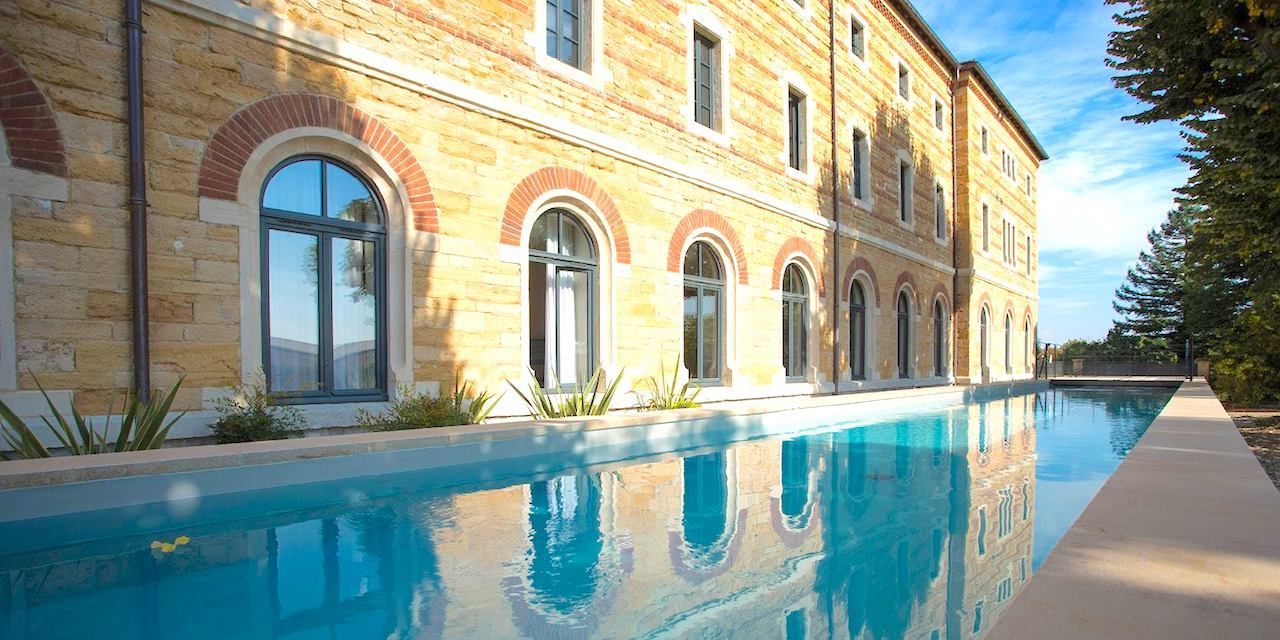 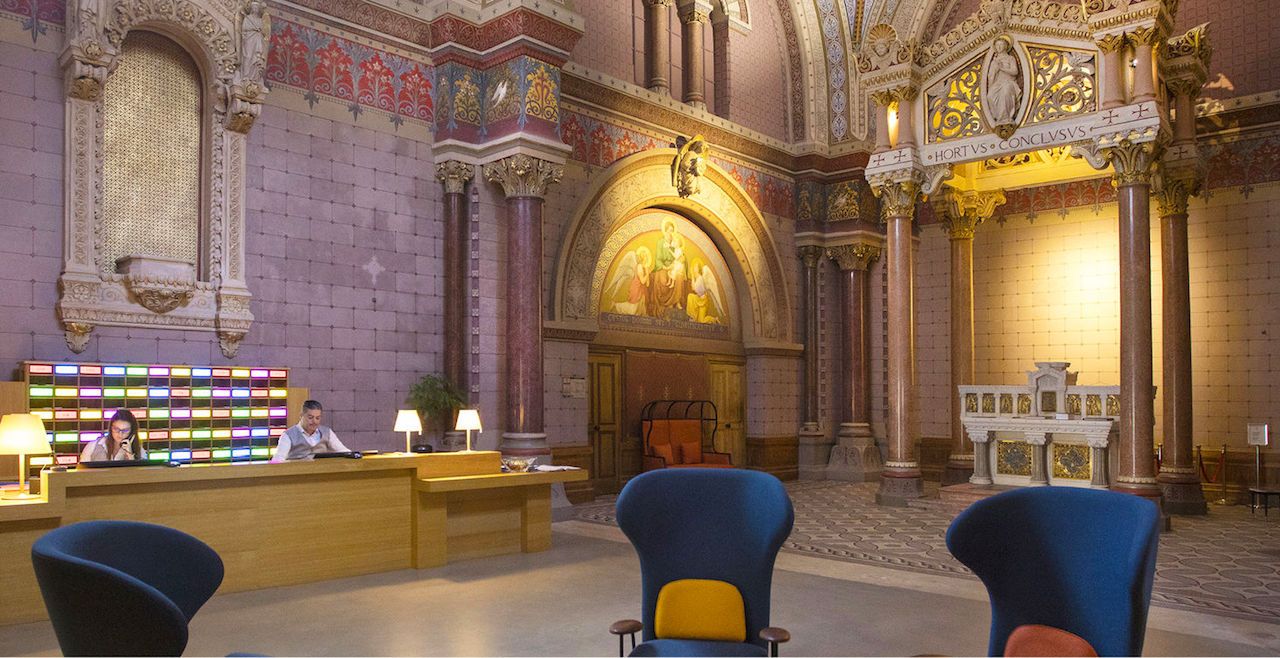 The old convent of Visitation, a monastery built in 1854, was renovated and transformed into the gorgeous Fourvière Hôtel in 2015. The stunning building housing 75 clean-line, minimalist bedrooms and suites is built around a large cloister. The hotel’s reception is located in a former chapel, transporting guests into a peaceful setting upon their arrival. There are two restaurants (one of them, Le Bouchon, serves traditional Lyonnaise cuisine), a large swimming pool, and a spa. Rooms start at $186. 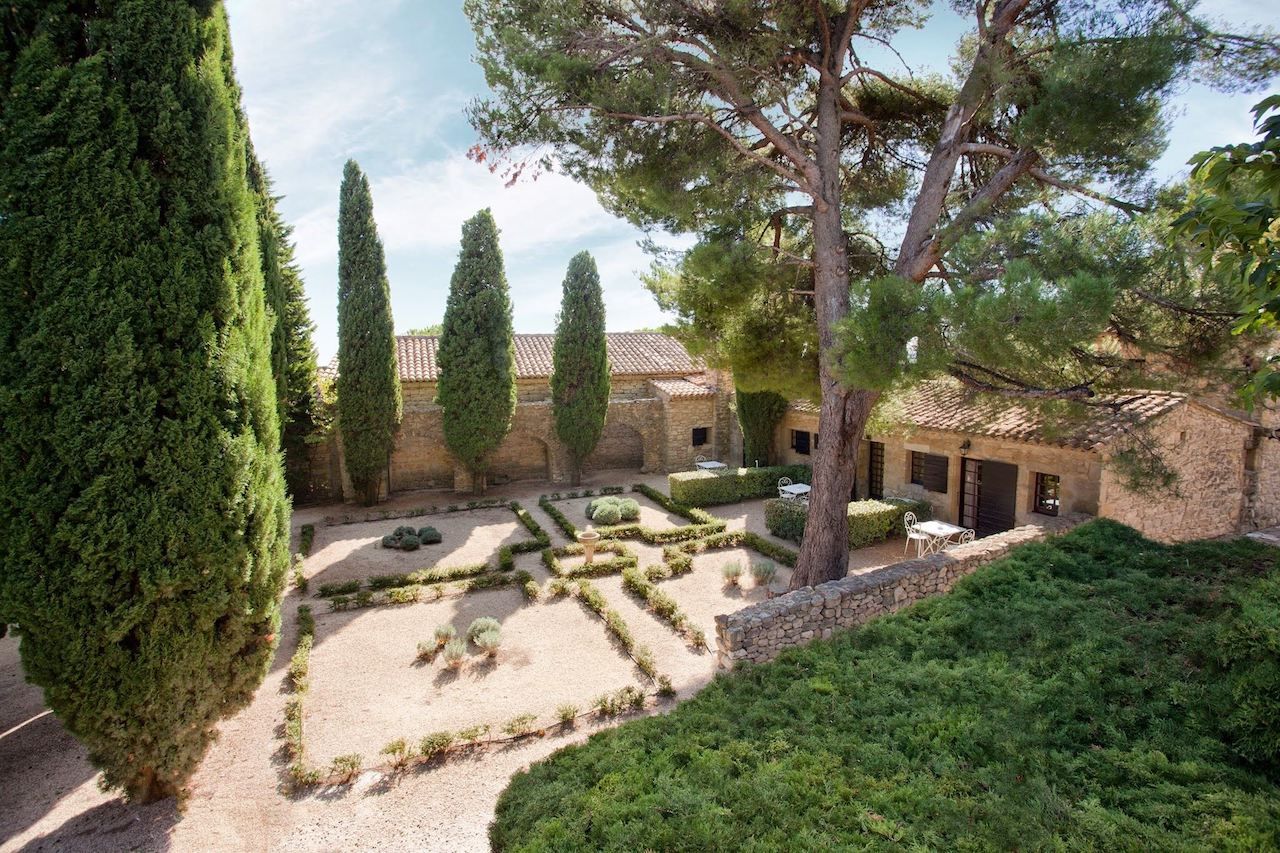 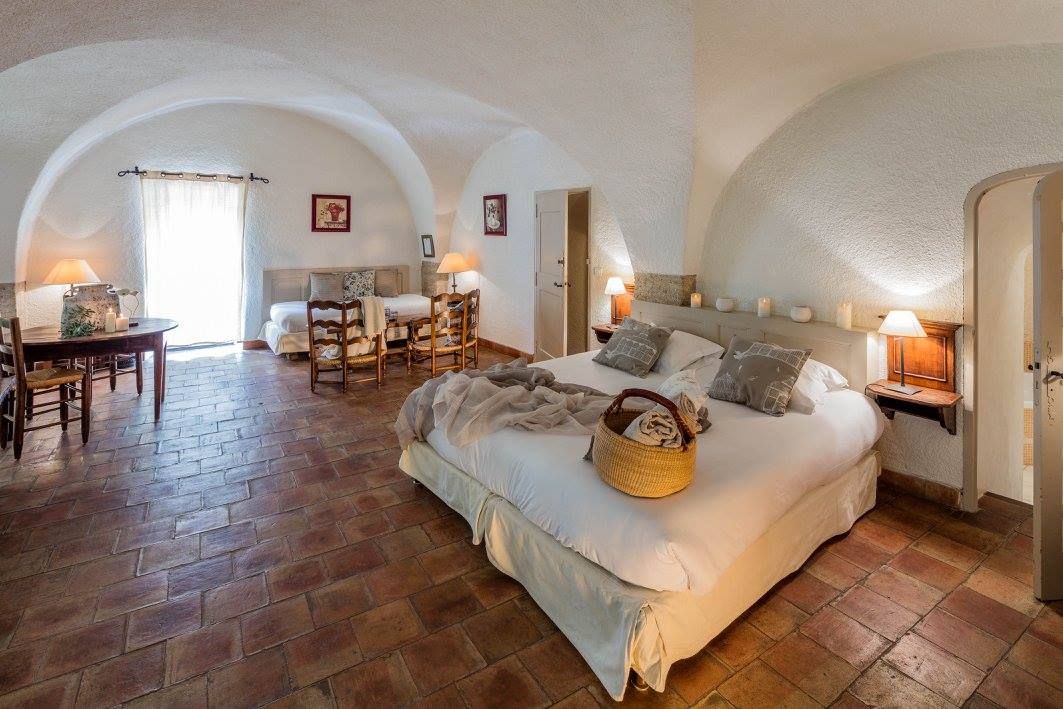 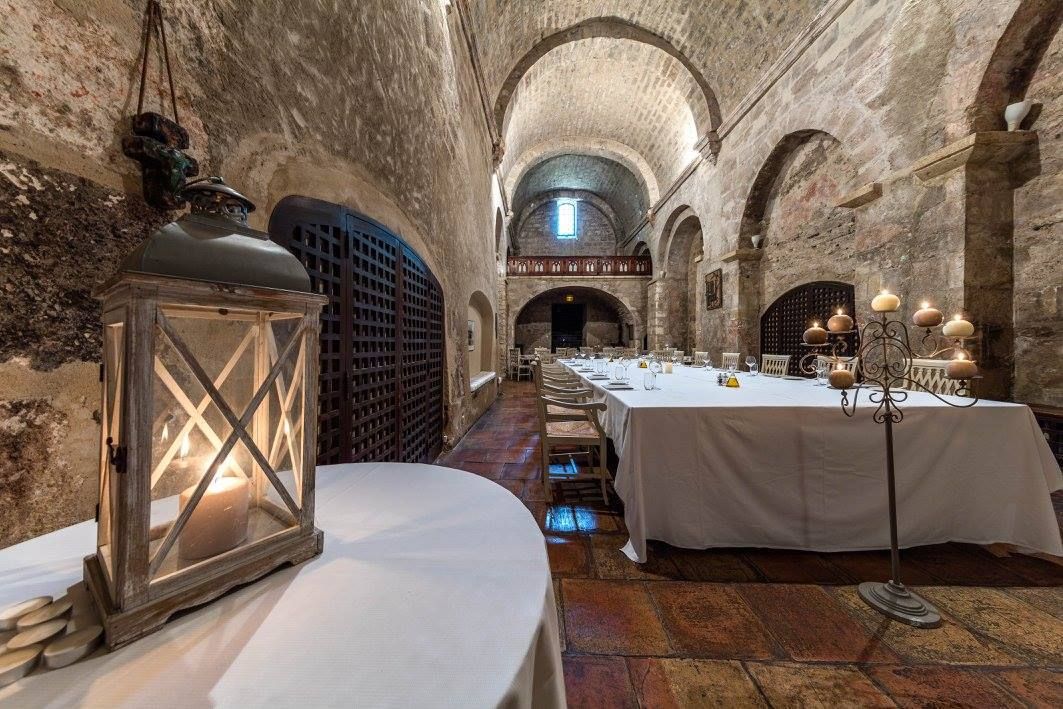 You would want to sleep in Abbaye de Sainte-Croix, a 12th-century abbey, just for its location: perched on a hill and in the middle of a pine forest, with a panoramic view over the region. But the abbey itself, restored in the 1970s, is just as amazing. The monks’ former cells were turned into comfortable, luxurious suites, all the while keeping the original architecture intact. The hotel has its own restaurant, a swimming pool, and a spa. Rooms start at $233. 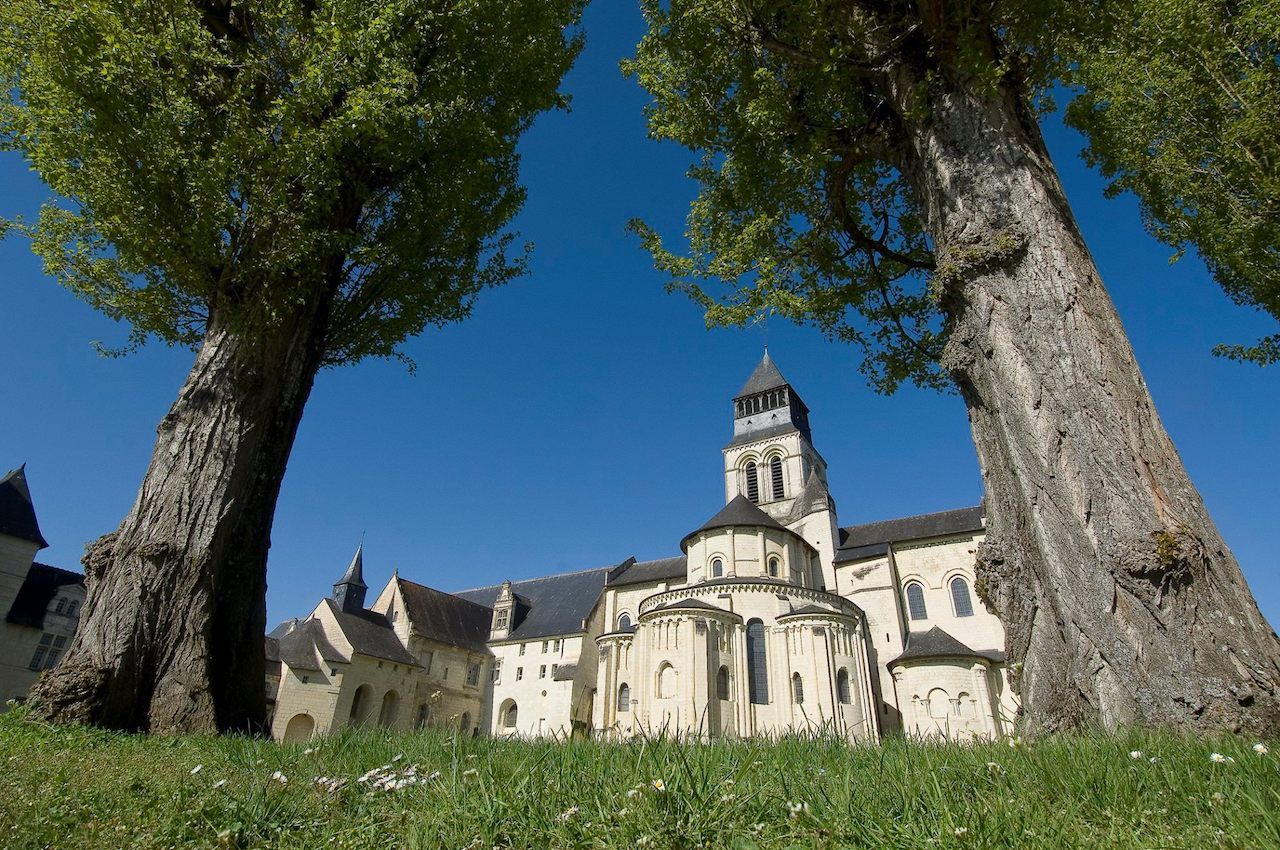 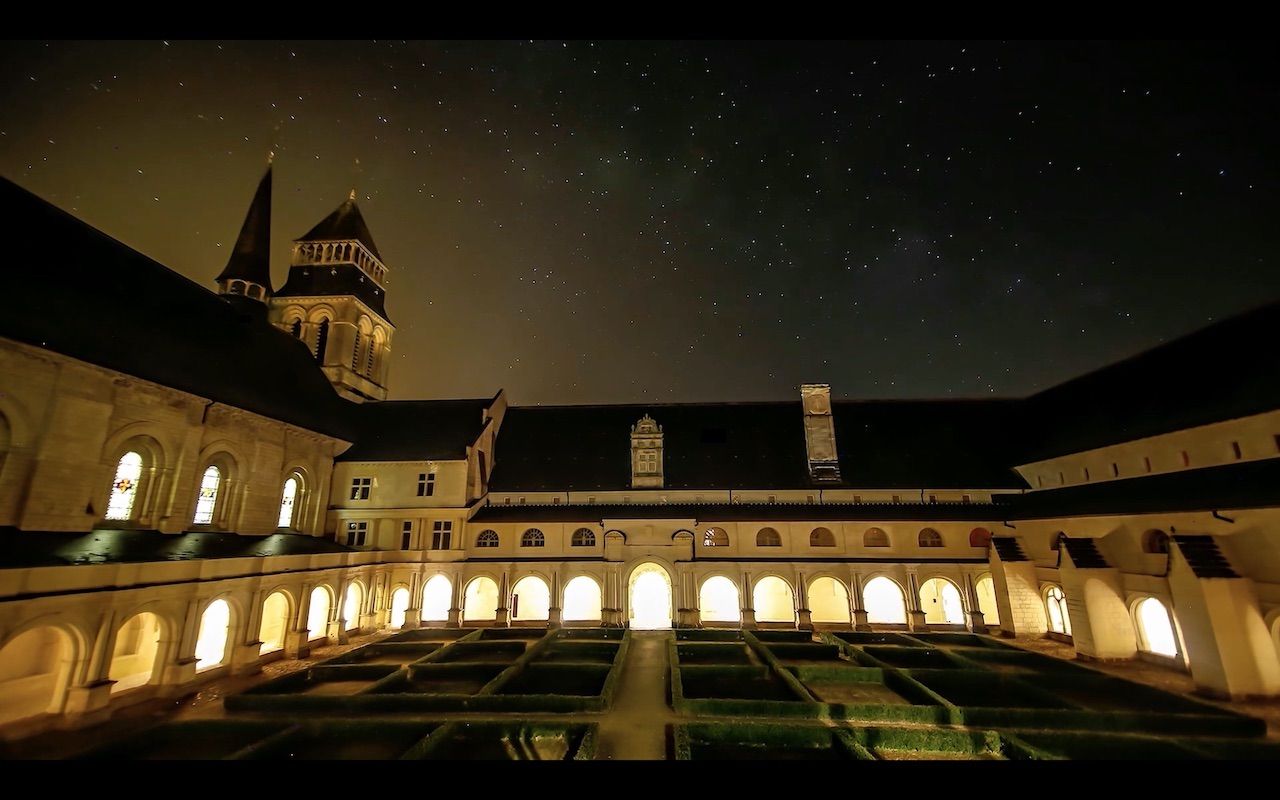 Founded in 1101, this abbey used to be the home of 3,000 nuns and monks. Centuries later, Napoleon turned it into a prison and, after decades of decline, it was restored and turned into a cultural center. Fontevraud L’Hôtel is in one of the former priories, and the rooms maintain that monastic vibe with modern, minimalist decor that highlights the architecture. The hotel’s restaurant that opens onto the priory’s cloister has one Michelin star, so don’t skip a meal. One of the highlights of staying in Fontevraud is the opportunity to wander around the abbey at night, when all tourists have left and you have the place all to yourself. Rooms start at $153. 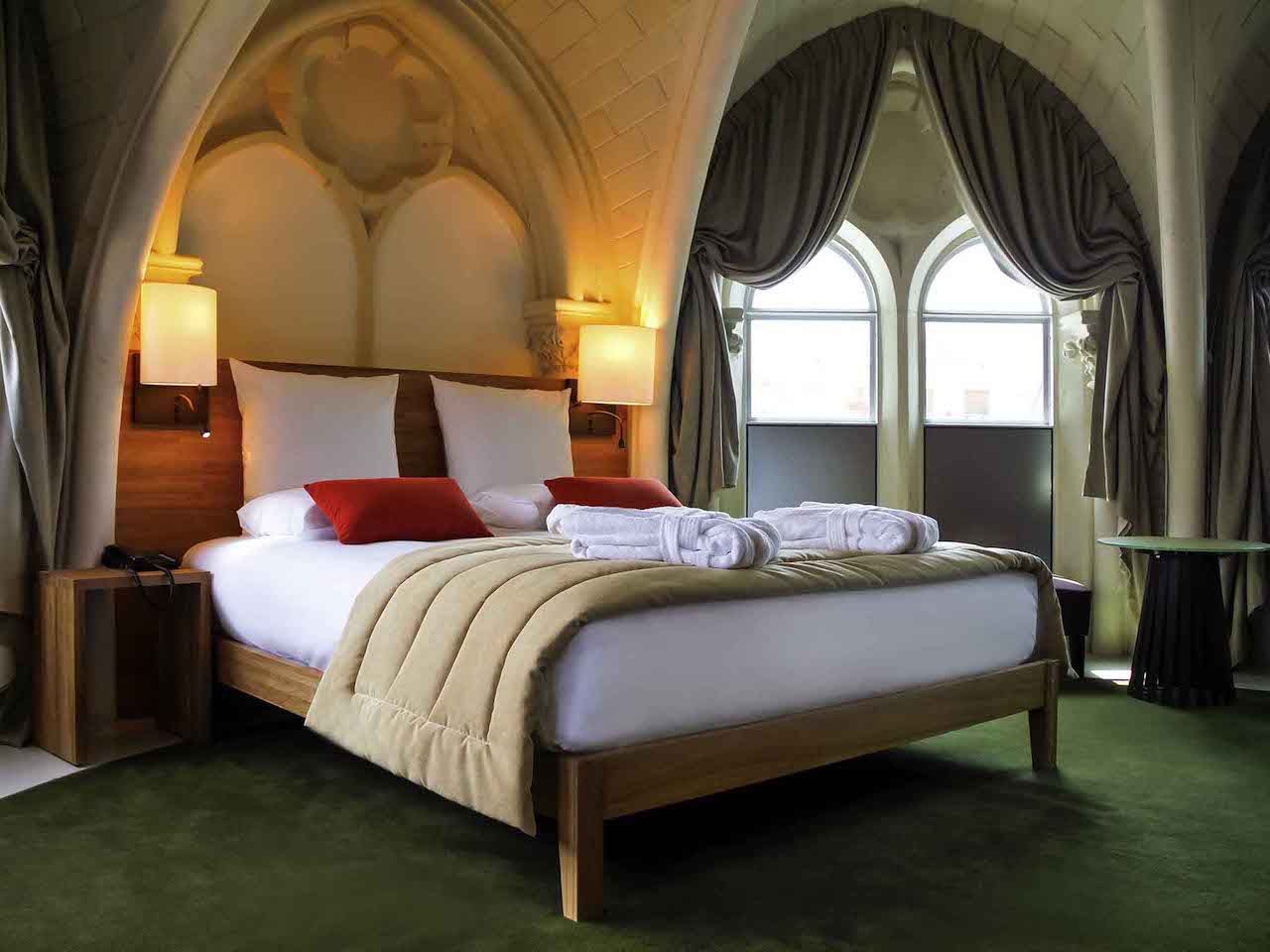 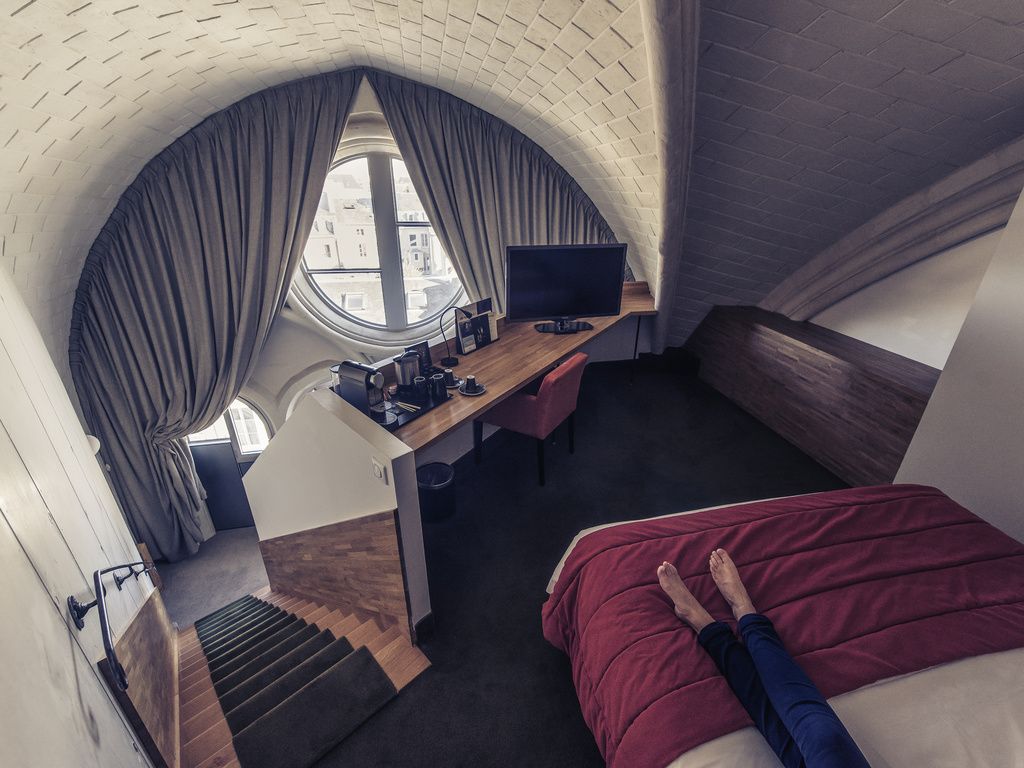 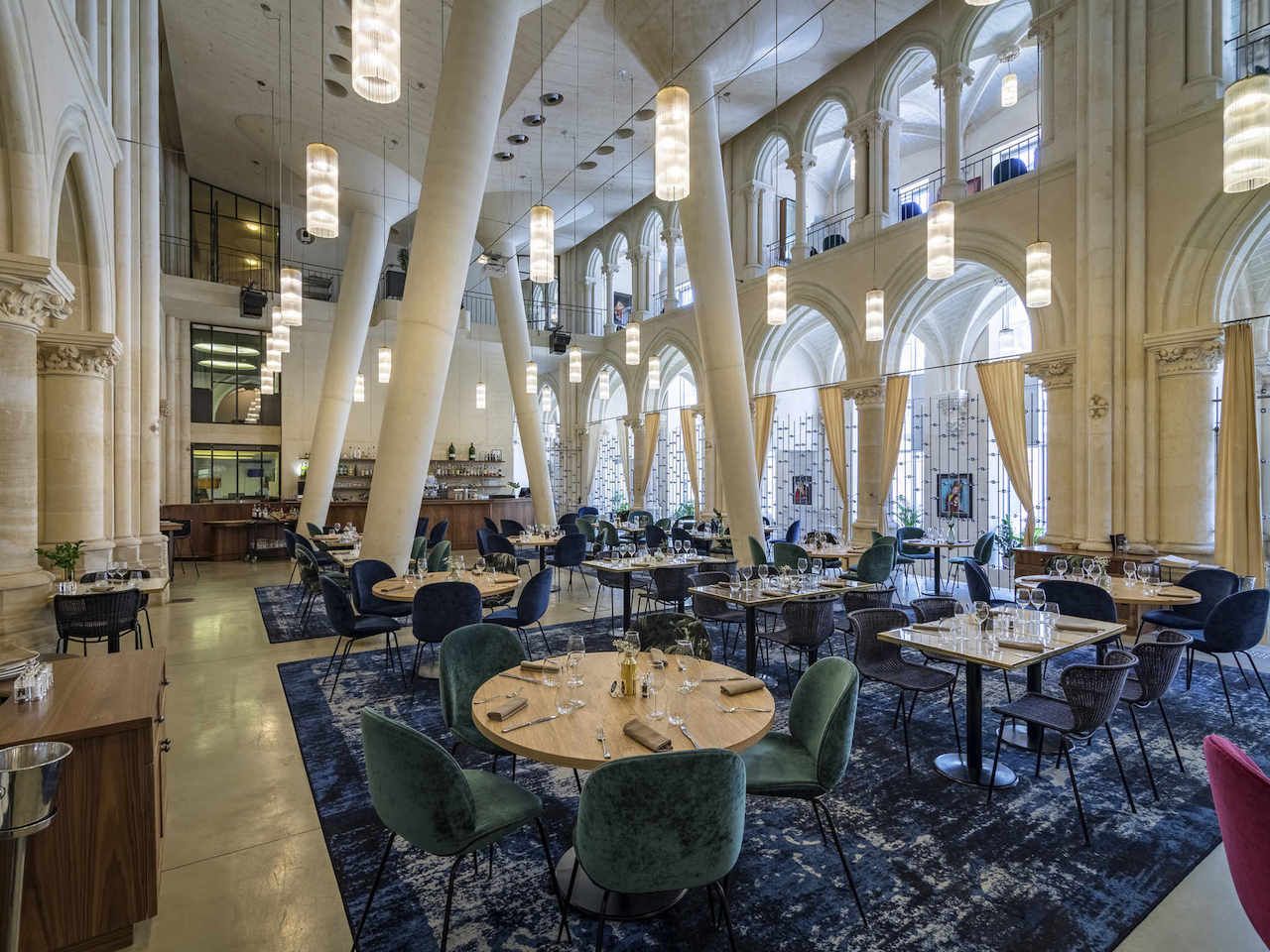 This former 1854 Jesuit chapel is now a four-star hotel. Not all the rooms at the Hôtel Mercure Poitiers Centre feature the 19th-century chapel’s architecture, but if you ask for one, you’ll get it (depending on availability and your willingness to spend more, of course). If you want to splurge and fully take advantage of the beautiful setting, book the suite located at the very top of the old chapel. No matter what room you book, you’ll still be able to enjoy the amazing architecture in the hotel’s restaurant that has been set up in the chapel itself — large lancet windows, arches, and columns are sure to make your breakfast pop. Rooms start at $111. 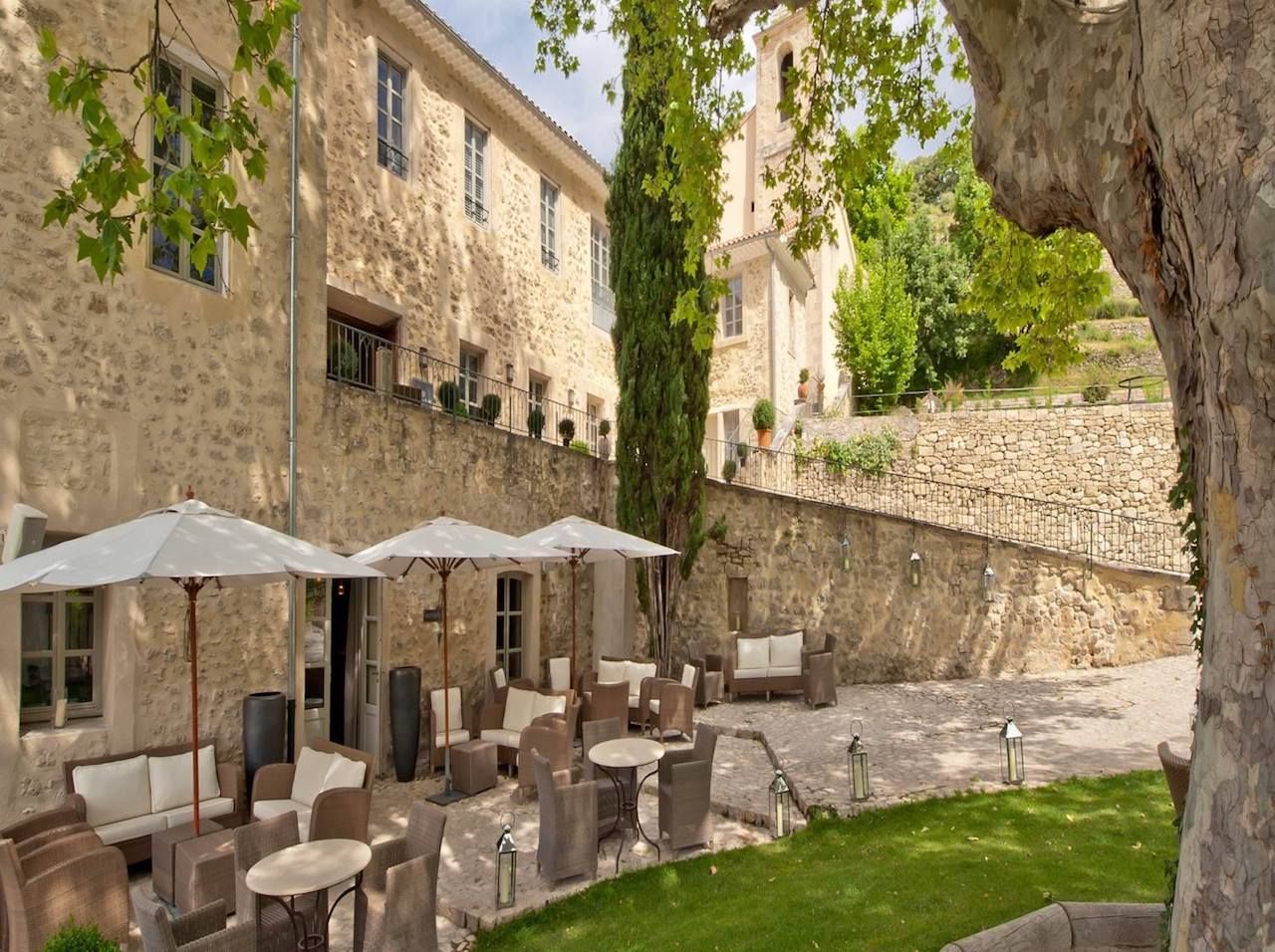 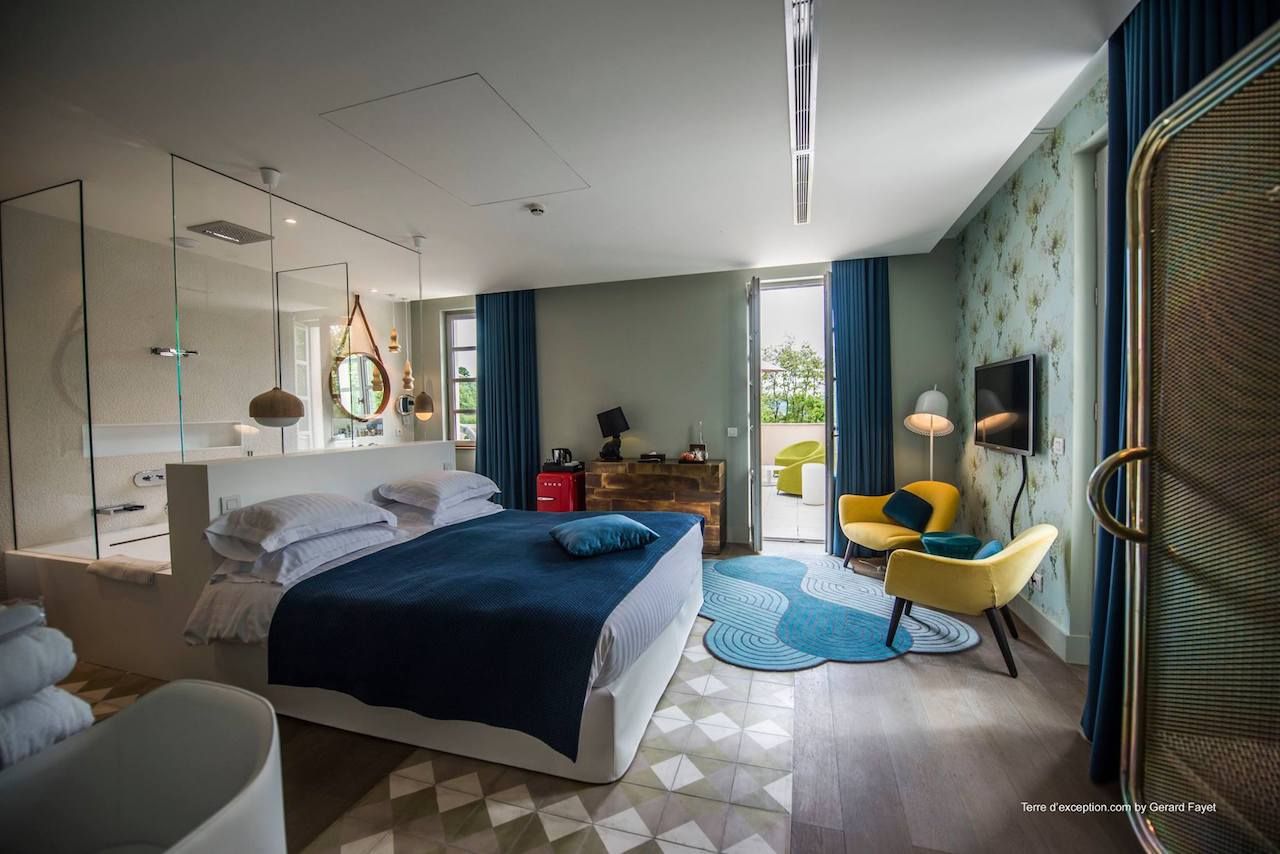 Founded in 1613, Le Couvent des Minimes (a convent), reopened as a hotel and spa in 2008. The restoration of the building kept the original architecture and facade, as well as the terraced botanical gardens, but gave the rooms all the modern commodities needed and a touch of contemporary design. You’ll be tempted to just stay within the property and enjoy the swimming pool, spa with L’Occitane products (at an extra charge), one-Michelin star restaurant, and bucolic walks in nature, but it would be a shame. The Couvent des Minimes is also perfectly located to explore the Alpes-de-Haute-Provence mountains and the region’s famous lavender fields. Rooms start at $229.

Epic Stays11 Insanely Beautiful Castles You Can Actually Stay the Night In
Tagged
Epic Stays France
What did you think of this story?
Meh
Good
Awesome