Biking Palisade, Colorado’s Fruit and Wine Byway is the most “Colorado” thing a wine drinker could ever possibly do. You’re outside, getting exercise under the Colorado sun, the beautiful mountains of the Grand Mesa and Bookcliffs surrounding you. Colorado’s only legitimate wine region is compact, with more than two dozen vineyards and tasting rooms tucked into the eastern corner of Colorado’s Grand Valley. “Colorado is making a pretty good run at California,” says Dave Smith, owner of the company Pali-Tours. “We’ll never be that big, but we have the altitude. There’s just something about the grapes here.”

While some wineries here are larger and reminiscent of major wine regions like Napa or the Okanagan Valley, most are small mom-and-pop operations whose wines are both unique and often hard to come by outside of western Colorado. Any of the three biking routes discussed here provide a sample of both. Get out here soon — because Colorado’s wine country won’t be under the radar for much longer. 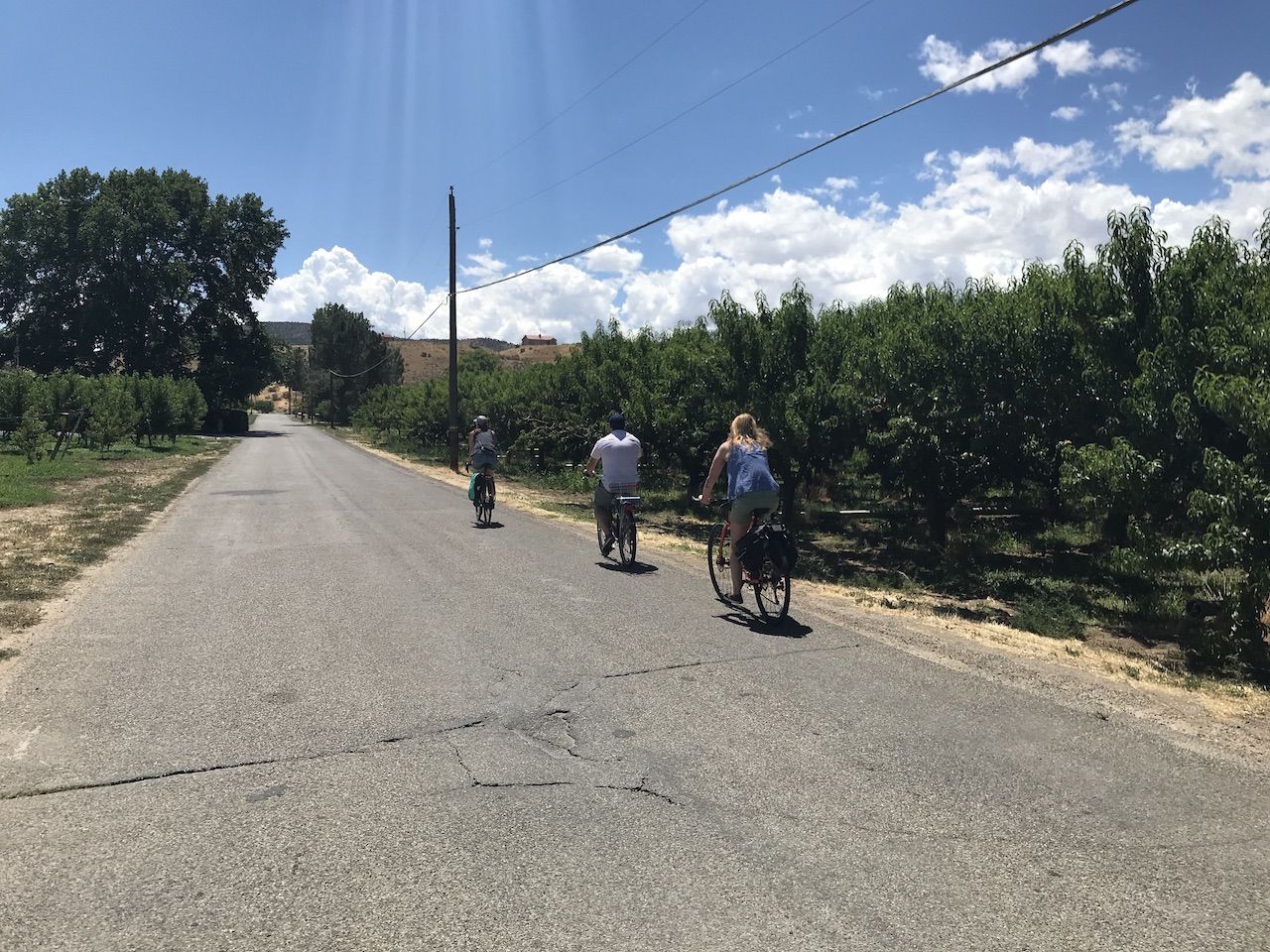 Before you arrive in Palisade, reserve a bike rental from Rapid Creek Cycles. Rentals run $36.95 daily for a cruiser bike or $55 for an electric version of the same. When you arrive to pick up your bike, the shop will provide you with a map of the area’s wineries and a run down on biking conditions or any hazards to be aware of. Maps are also available at the Palisade Chamber of Commerce across the street and online.

If you only take one piece of guidance before hopping on your beach cruiser, let it be this: Get yourself a Camelbak and fill it up with cold water. It’s hot here, temperatures regularly hit the upper 90s in summer, and bike-powered wine touring means your hydration level is taking a double hit. By swigging water as you ride between the vineyards, you’re not only keeping hydrated but saving yourself that wicked hangover the next day. 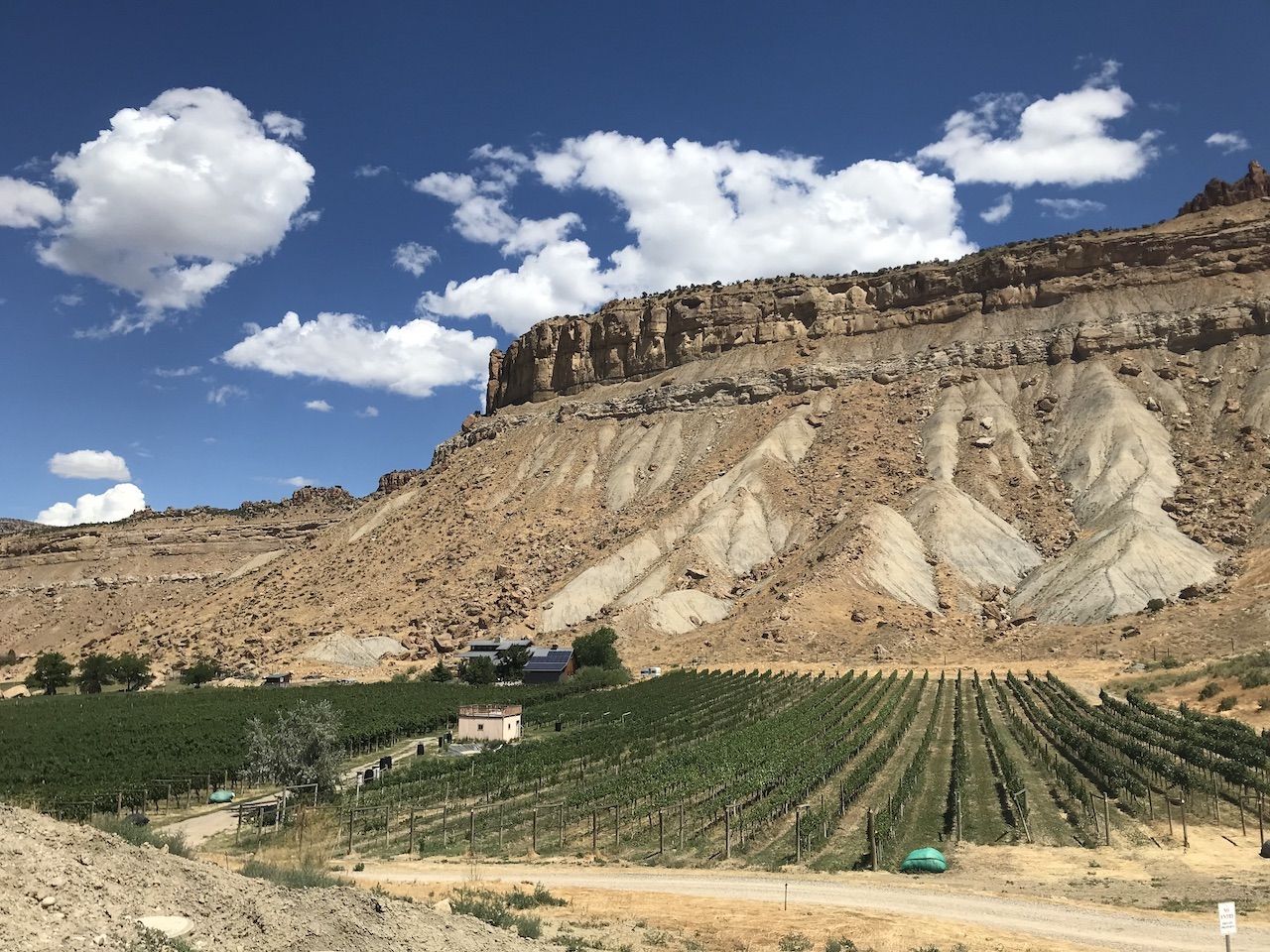 The entire route follows paved roads, though many of the driveways leading into the vineyards are made of gravel or rock. Your cruiser bike should have no problem anywhere. Signs marked “Fruit & Wine Byway” guide you along the road, ensuring you don’t miss important turns and pointing out ideal spots to stop for photo ops, such as the famous Bookcliffs rock formations or the Colorado River snaking through the Grand Valley. There are three organized routes, two of which are easy cruisers and one of which is, when the heat pounds down, a challenge even for experienced riders. If this is your first time on a bike for quite some time, start with the West Cruiser Loop, where a quick pause at a town park or your lodging property is never far away.

No matter the route, rarely will you ride for more than 10 minutes at a time without stopping at a tasting room — often they are located less than one mile from one another. That said, stopping at every winery you pass may not be the best idea if you want to keep a clear head on your bike. Note that not all tasting rooms serve food, and the bulk of the town’s restaurants are located in the small downtown area surrounding the bike shop. Bring snacks to munch on along the way, or even pack a lunch if you don’t want to take any chances. 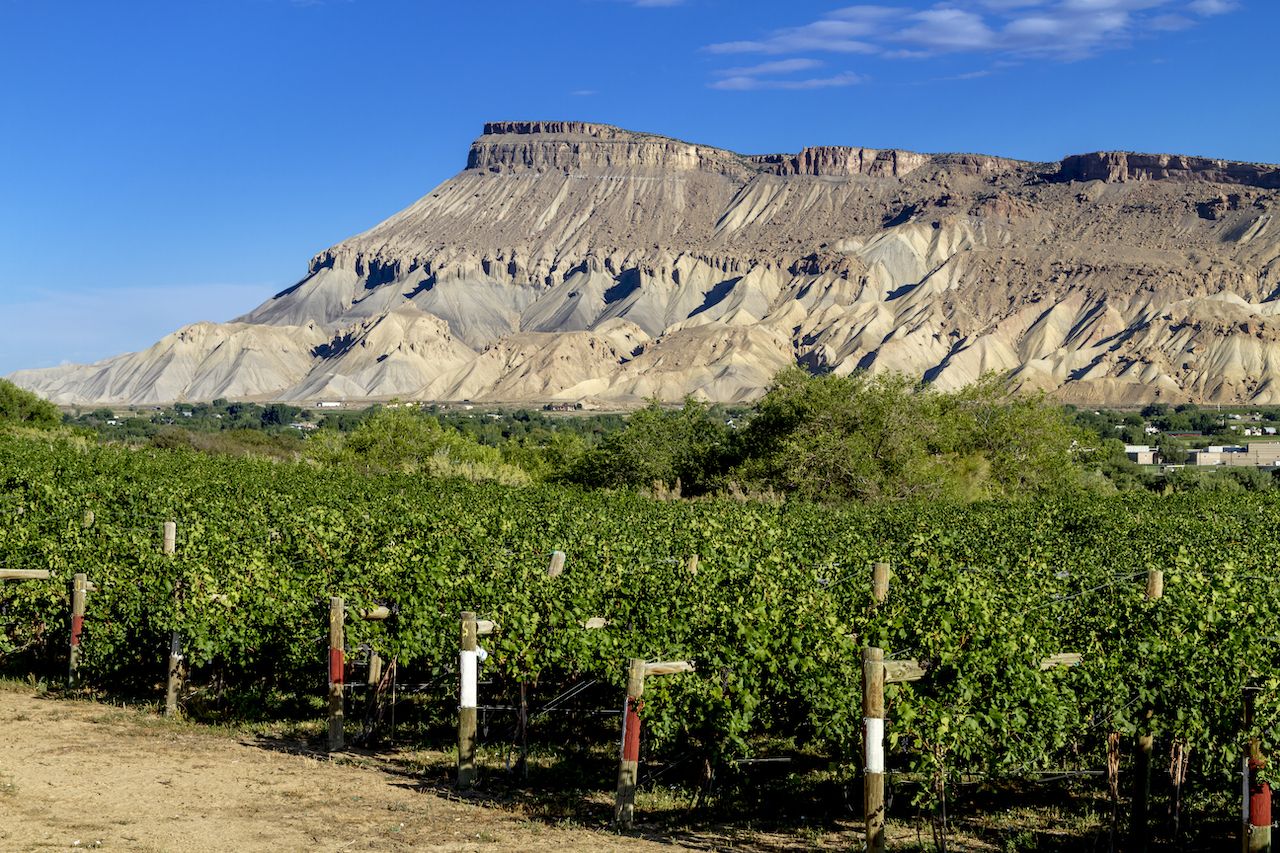 The most common bike tour route in Palisade is the West Cruiser Loop. This one is flat and mellow, with the bonus of giving you a thorough tour of the town as you push between tasting rooms. It’s seven miles roundtrip from downtown Palisade with stops at seven wineries, with a nice stop-off at Riverbend Park to rest your legs and escape the heat under a towering cottonwood tree.

You’ll also find more diversity on this route than any other. From Rapid Creek Cycles, head through downtown to St. Kathryn’s Cellars or Grand River Vineyards. The former offers a collection of fruit wines in addition to classics like cabernet sauvignon and chardonnay. The latter specializes in dry whites and reds, with a notable viognier and Meritage white.

Meadery of the Rockies is a unique stop on this tour for honey wine. No matter which tasting rooms you elect to visit, finish the route at Maison La Belle Vie. This French-inspired spot has a deep, red-heavy catalog and pastries to provide some sustenance for the ride back to town. Try the vin de pêche, which is made with Palisade’s arguably more renowned fruit, peaches. 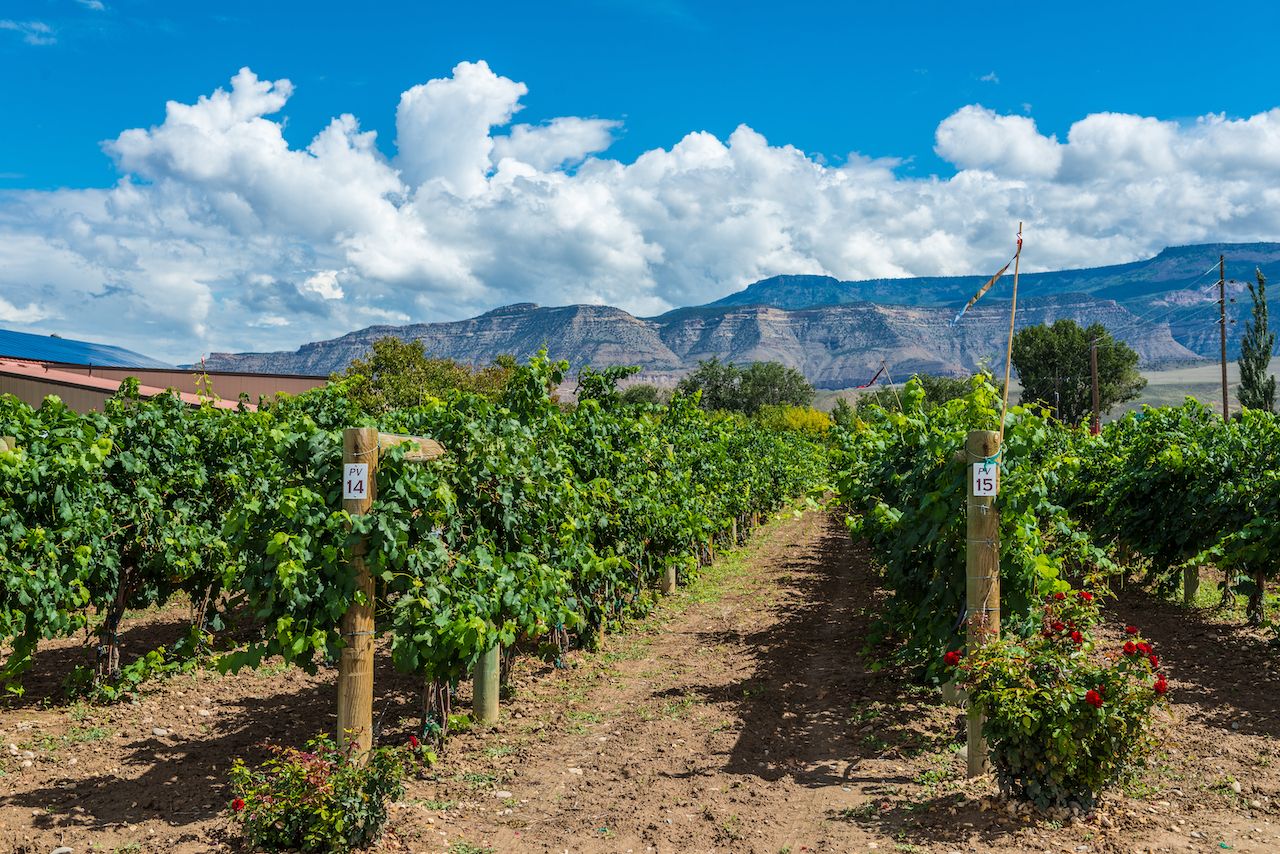 The East Cruiser Loop is the best option to allow the high-desert scenery of the region to be the highlight, with the wine as a nice complement. Pedal past sprawling vineyards and orchards en route to stop one at Colterris, the largest operation in the valley and the only one to offer their wines in a can as well as a bottle. From there, follow US-6 along the Colorado River to Bookcliff Vineyards, a new tasting room with a full-bodied malbec that is a true example of the region’s high-altitude growing prowess. While Colterris and Bookcliff are the only two tasting rooms on this route, pedaling a few minutes from Bookcliff through downtown provides easy access to DeBeque Canyon Winery. Visiting fewer wineries though just means you can feel better about having a full glass. 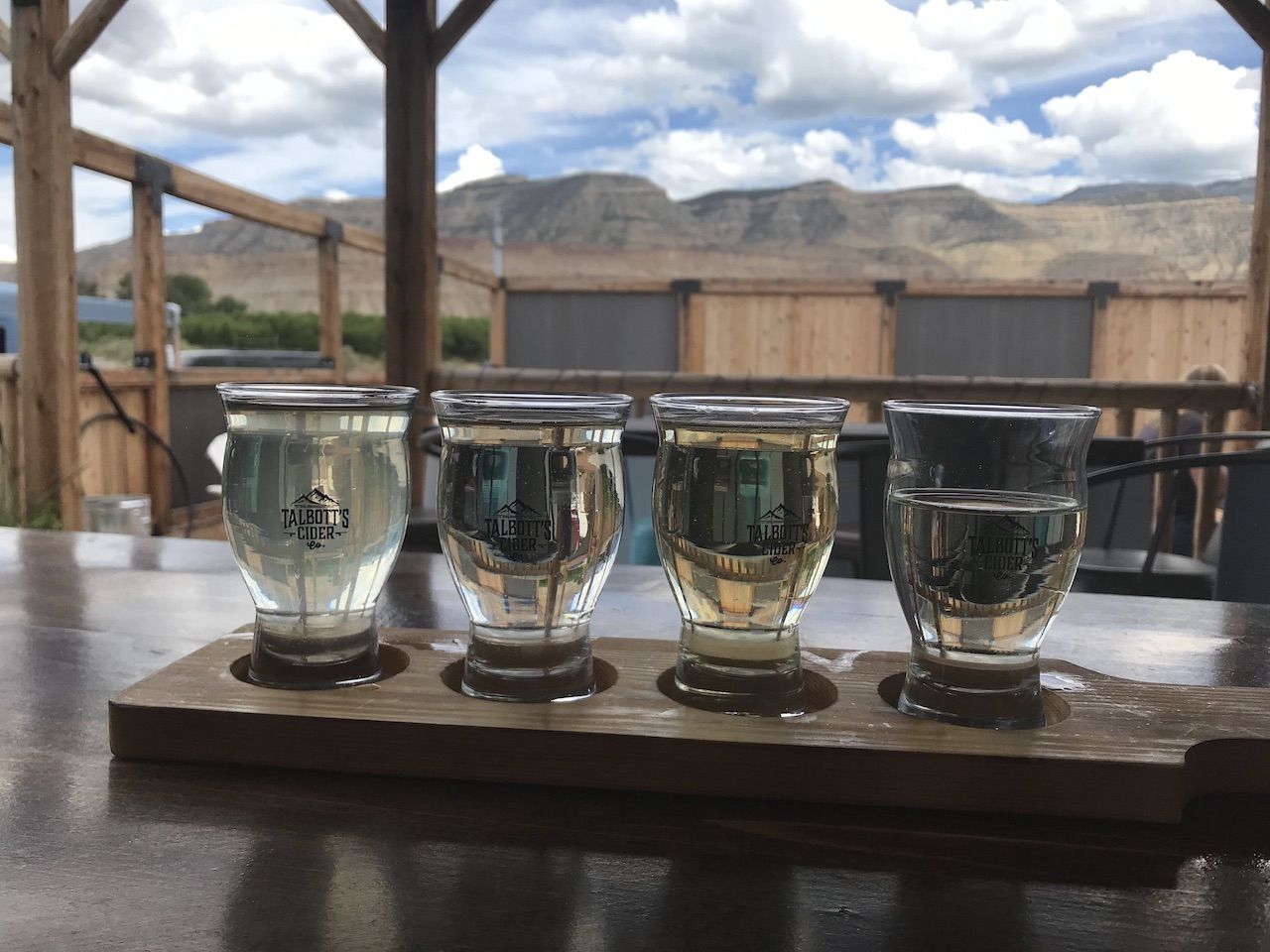 This one’s for the person who wants to party but also doesn’t want to miss a workout. It’s 25 miles roundtrip, picking up where the East Cruiser Loop finishes. Instead of crossing the river, turn left just before it onto 38 Road and head up onto East Orchard Mesa, following the Fruit & Wine Byway signs pointing towards Talbott’s and Carlson Vineyards. The initial push up to the mesa is the only steep hill you’ll encounter on the route, but it’s a gnarly climb for about 10 minutes. There’s a dedicated bike sidewalk, which should be employed to stay away from traffic and give yourself space to stop and catch your breath if necessary. The tour heads down the mesa and loops back into downtown Palisade, encompassing part the West Cruiser Loop on its return journey.

Stop right atop the hill at Talbott’s Cider Company and take a break from grapes with a glass of crisp hard cider with flavors ranging from peachy to hoppy. If you have space in your backpack, Talbott’s has a great farmer’s market on-site with fresh local fruits and vegetables.

From Talbott’s, biking this route feels kind of like watching an old army movie. Left, right, left. Another right, perfectly in time. The byway is made up of right-angle intersections with orchards on all sides and only one option forward. The tasting rooms are clearly marked. Even if you don’t make it all the way around the loop, push at least to Restoration Vineyards, a new tasting room opened last fall and home to the valley’s best Sauvignon Blanc. Also of note is the Barbera, a rich red with blackberry on the nose and a smooth finish. If you keep going, Carlson Vineyards has a small tasting room that feels as though you’re sampling in the winemaker’s home kitchen. Their NSFW (Not Safe For Work) Red and Rosé are the must-trys here and a great option for a nightcap back at your lodging.

What to do if you don’t want to bike 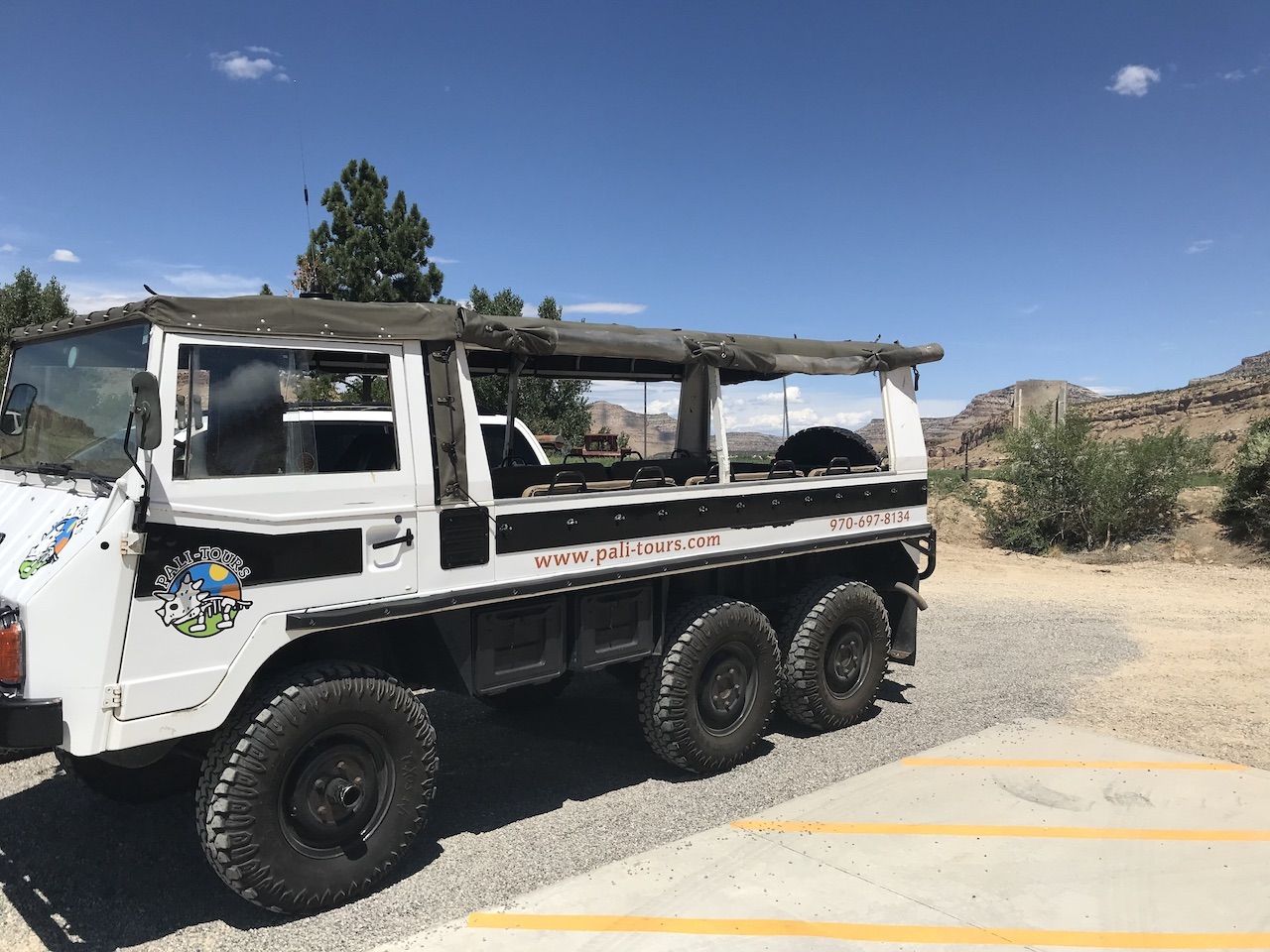 One of the best wineries in all of Palisade is Whitewater Hill Winery, a representation of the area’s country roots and mastery of the soil. The thing is, you’re looking at 24 miles of roundtrip riding to get there and back. If you have a designated driver, parking is available at all tasting rooms. You could rent a horse and carriage, but that’s pretty slow and necessitates keeping a bottle or two of wine in the cab for the commutes. Fortunately, there’s a hack. Pali-Tours is the only way to ride through town in style on anything more than two wheels. Sure, you can hire a limo to shuttle you between stops, but that’s not nearly as cool as riding open-air in the back of a 6×6 military duckie. The company also offers a Water to Wine package, coupling afternoon wine touring with a morning rafting excursion on the Colorado River. 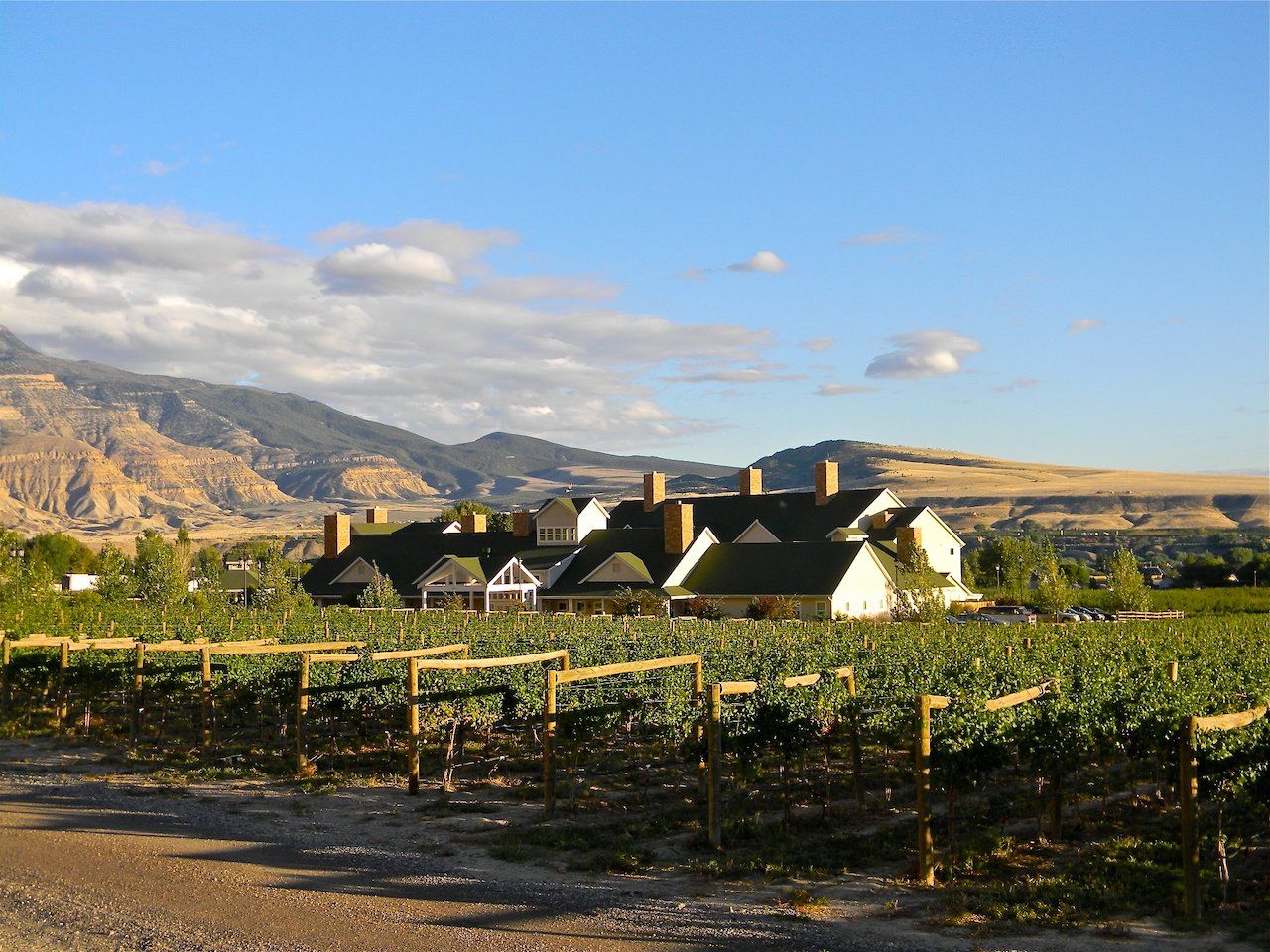 Century-old bed and breakfasts, laid-back vibes driven by a burning desire to get things done tomorrow, and a solid chance that the proprietor of the estate is the same person pouring your tasting — that’s Palisade. You can stay at a chain hotel in nearby Grand Junction, but for the true experience, book a room in town and fully immerse yourself in how Colorado does wine country.

The Wine Country Inn is adjacent to two of the valley’s most respected wineries. Their lodge is a massive Victorian-style building with 80 guest rooms that offers hot breakfast and guest tastings each afternoon. Right downtown, the Wine Valley Inn is a bed and breakfast with a large porch and tasting area outside. It is right in the heart of Palisade and within walking distance of downtown’s shops and restaurants. The rooms at the Spoke and Vine Motel are modern and clean, and bike rental is available on site, saving you from having to reserve one at the bike shop.

By the way, what is the deal with the crazy street names?

You’ll immediately notice a completely wacky system of street names here. For example, you’ll pass streets with names including 29 Road, and even some more colorful labels including 36 3/10 Road. This isn’t an ode to Palisade residents’ keen ability to solve complicated math problems. Roads running north to south are labeled by numbers signifying their distance from the Colorado-Utah border. Head 36.3 miles west from 36 3/10 Road and you’ll be at the border. Head 29 miles west from 29 Road and… you get the picture. It’s a full mile between 28 Road and 29 Road. East-West streets, on the other hand, are labeled by letters, with a mile representing a full letter. So, on your way down the East Orchard Mesa Loop you’ll make a right turn onto F ¼ Road, a firm quarter mile north of F Road but 0.75 miles shy of G Road. It’s a hilariously unique system, for sure, designed originally to serve as easy markers for farm plots.

Colorado Grows the Best Peaches in the Country. Here's Where To Try Them.