With the end of Game of Thrones drawing near, HBO has greenlit a prequel series set in the same universe from author George R.R. Martin and writer Jane Goldman. It’s reported that it will be set a thousand years before the events of A Song of Ice and Fire, during the golden Age of Heroes. Apparently, it’ll be even darker than the Westerosi events we’ve come to know and fear. Here’s the full synopsis from HBO:

“Taking place thousands of years before the events of Game of Thrones, the series chronicles the world’s descent from the golden Age of Heroes into its darkest hour. And only one thing is for sure: from the horrifying secrets of Westeros’ history to the true origin of the white walkers, the mysteries of the East to the Starks of legend… it’s not the story we think we know.”

Everyone is staying tight-lipped to prevent any leaks about the impending Game of Thrones finale and planned prequel, so little else is known about the series, but we do now know two more things: filming is confirmed to begin in October of this year, and HBO is scouting the Isle of Skye in Scotland as the location for outdoor scenes for the prequels.

Though this isn’t the first time that Game of Thrones has filmed in Scotland (Doune Castle served as the location for Winterfell in the pilot episode), the prequel could bring a massive boom in tourism to the Isle of Skye as it has done for Northern Ireland and Croatia. According to Tourism Ireland, a record 2.1 million tourists visited Northern Ireland in 2016, boosting revenue by 12 percent, thanks in part to rabid Game of Thrones fans seeking out filming locations. Dubrovnik has faced similar influxes of crowds due to the hit show, and the city is packed with more tourists than ever.

While beneficial to Scotland, this news doesn’t fare well for fans wishing to experience the locations without hordes of other people getting in the way, or non-show watchers who just want to see the legendary beauty of Skye. Don’t worry though — you still have time to see these amazing Isle of Skye sights before the buses of fans wearing fur cloaks and holding plastic swords start rolling in. 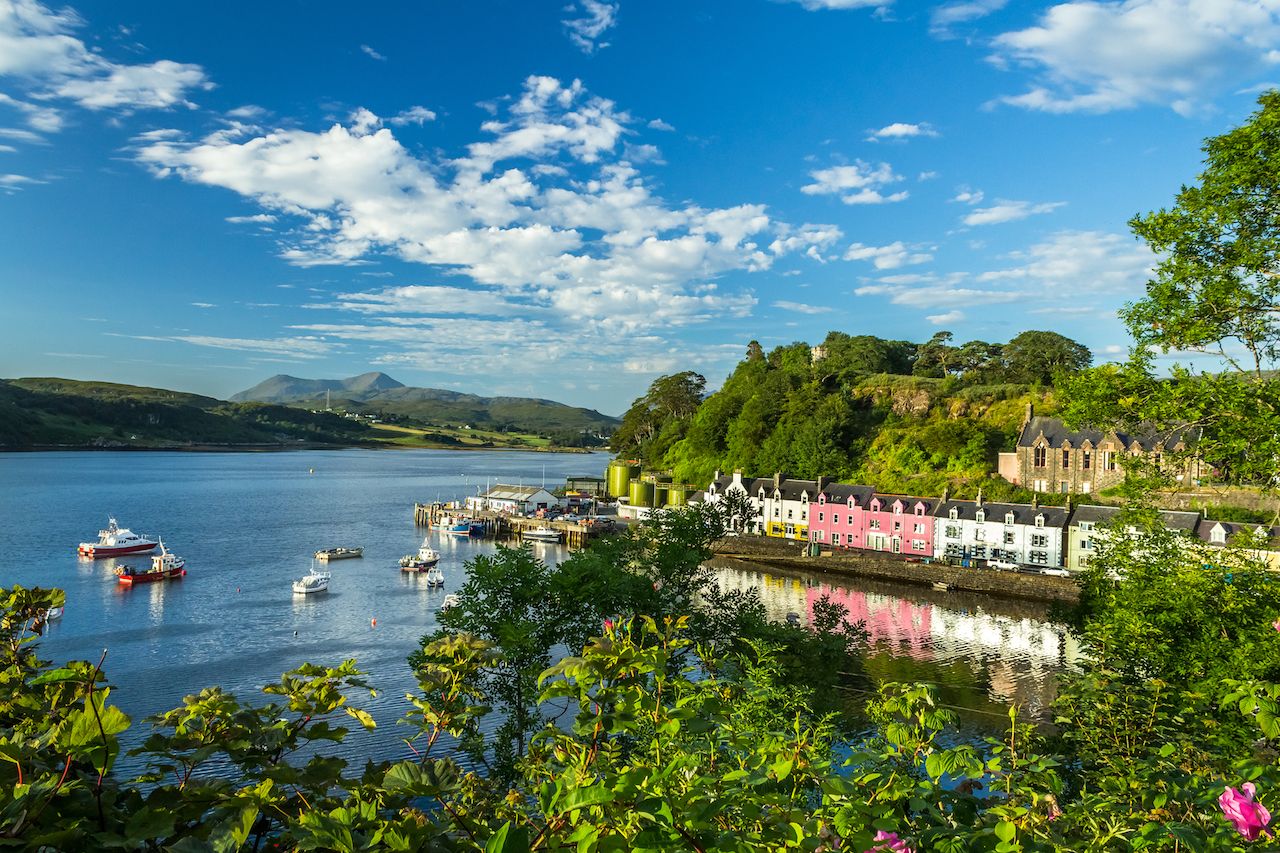 Portree is the largest town on the Isle of Skye, created by Lord MacDonald of Clan MacDonald in the early 19th century, as well as its capital. Its name comes from the Gaelic, Port Rìgh, for “Port on the Slope.” If you’re planning to explore Skye over multiple days, then you’ll want to make this your home base. Its central location makes it easy to access a myriad of major Skye sights, and the town also has a number of great restaurants and shops.

There are several accommodation options to choose from — it all just depends on what you’re looking for. There’s the quiet Springfield Guest House five minutes away from the town center, which has been run by the same family for years; the functional Portree Hotel on the main street; and some budget hostels scattered around. 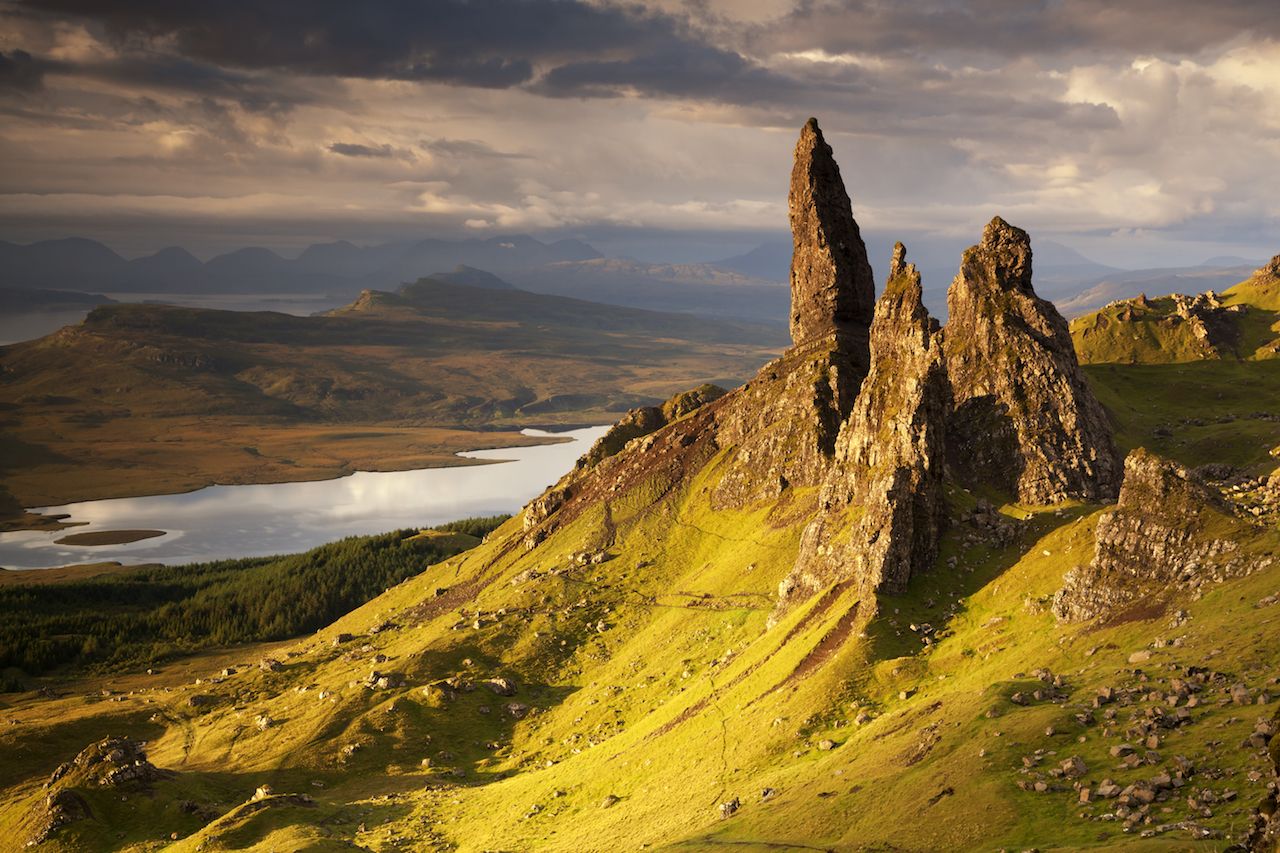 The Storr is a craggy hill located 2,359 feet above sea level with large, oddly shaped, pointed rocks on its peak created by a landslide that occurred many, many years ago. It’s called the Old Man of Storr because, according to legend, the rocks’ outline and peak resemble the face of an old man. The word Storr comes from Norse culture, meaning “Great Man.”

Those willing are able to hike to the top, and it should only take about an hour and a half each way. But be warned, the trek is steep, and you need to make sure you’re wearing the proper attire. 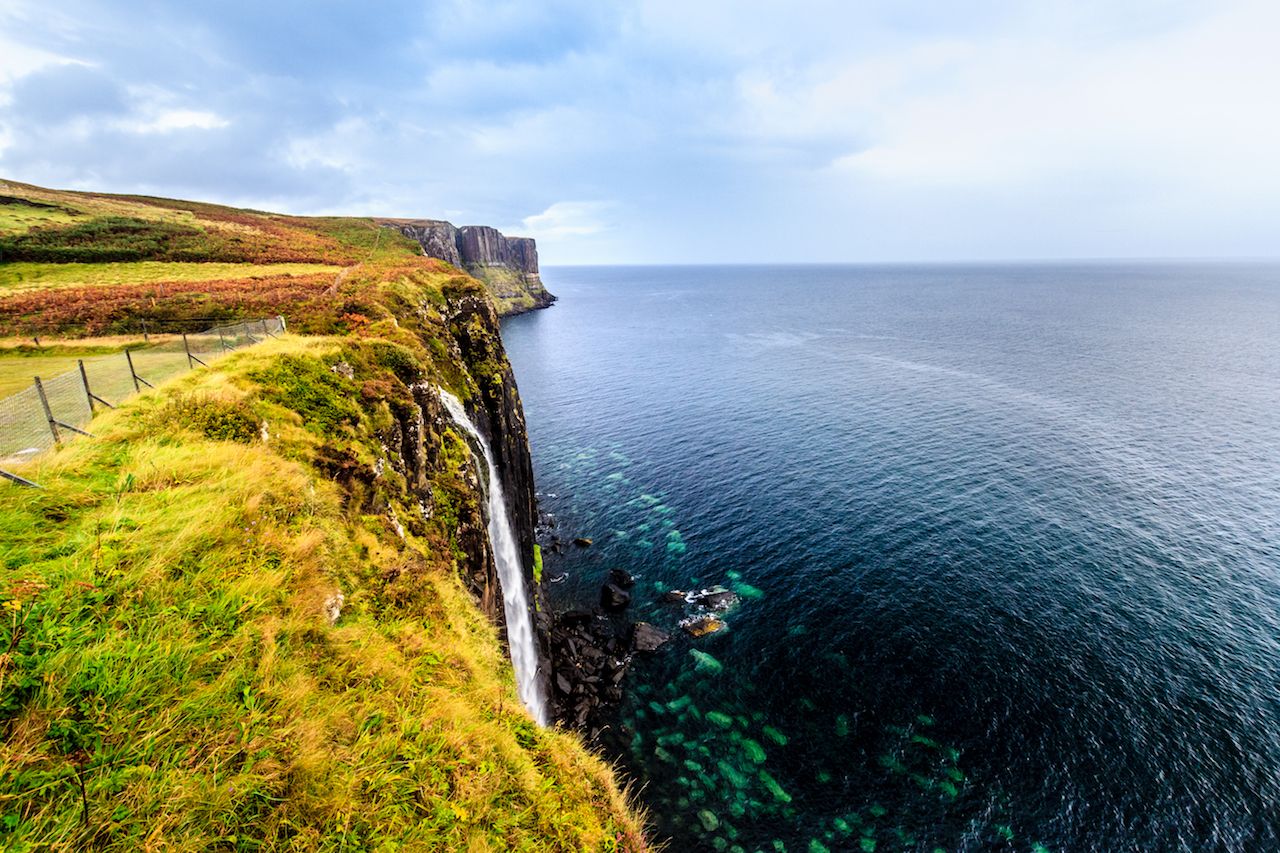 Mealt Falls and Kilt Rock are side by side, so you can easily see both sights in one visit. Mealt Falls is a large, roughly 180-foot-tall waterfall that’s fed by the nearby Mealt Loch, and Kilt Rock is a set of ancient, 295-foot-tall cliffs made up of basalt columns on top of a sandstone base. Some say that because of sea weathering and other weather conditions throughout the years, the colors of Kilt Rock appear to be tartan.

If you happen to visit on a windy day, then you might be lucky enough to hear unusually beautiful — almost eerie — music emitting from the rocks. But don’t worry, there aren’t any fairies or other mythological creatures lying in wait. The noise actually comes from the fences that enclose the lookout point; its holes allow the wind in, which then creates the sound. 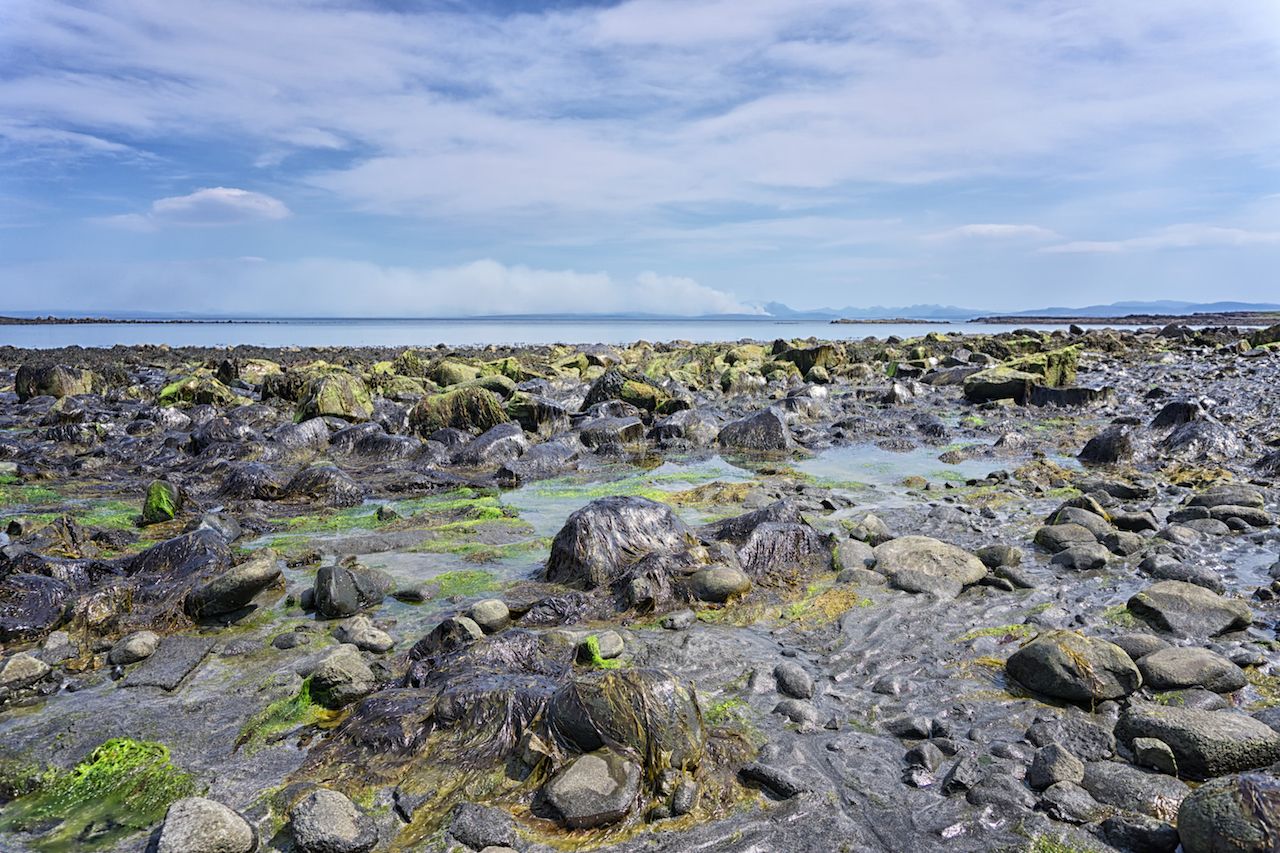 The beach at An Corran allows visitors to travel back in time and walk along the same paths that mighty prehistoric creatures did millions of years ago. Several pairs of dinosaur footprints can be found along the stretch of black sand and the surrounding patches of rock and grass. They were left by a group of Ornithopods, herbivorous dinosaurs that walked on two legs. Together with the Megalosaurus, Cetiosaurus, and Stegosaurus, they’re why Skye is also known as the “dinosaur isle.”

The footprints won’t be in obvious places, and can easily be overlooked if you’re not searching with eagle eyes, but if found, the feeling you’ll get when measuring your own foot against that of a dinosaur’s definitely won’t be forgotten. An Corran is open year round, but you’ll want to visit when it’s low tide or during the summer — that way, you can spot the footprints more easily and lounge on the beach afterward. 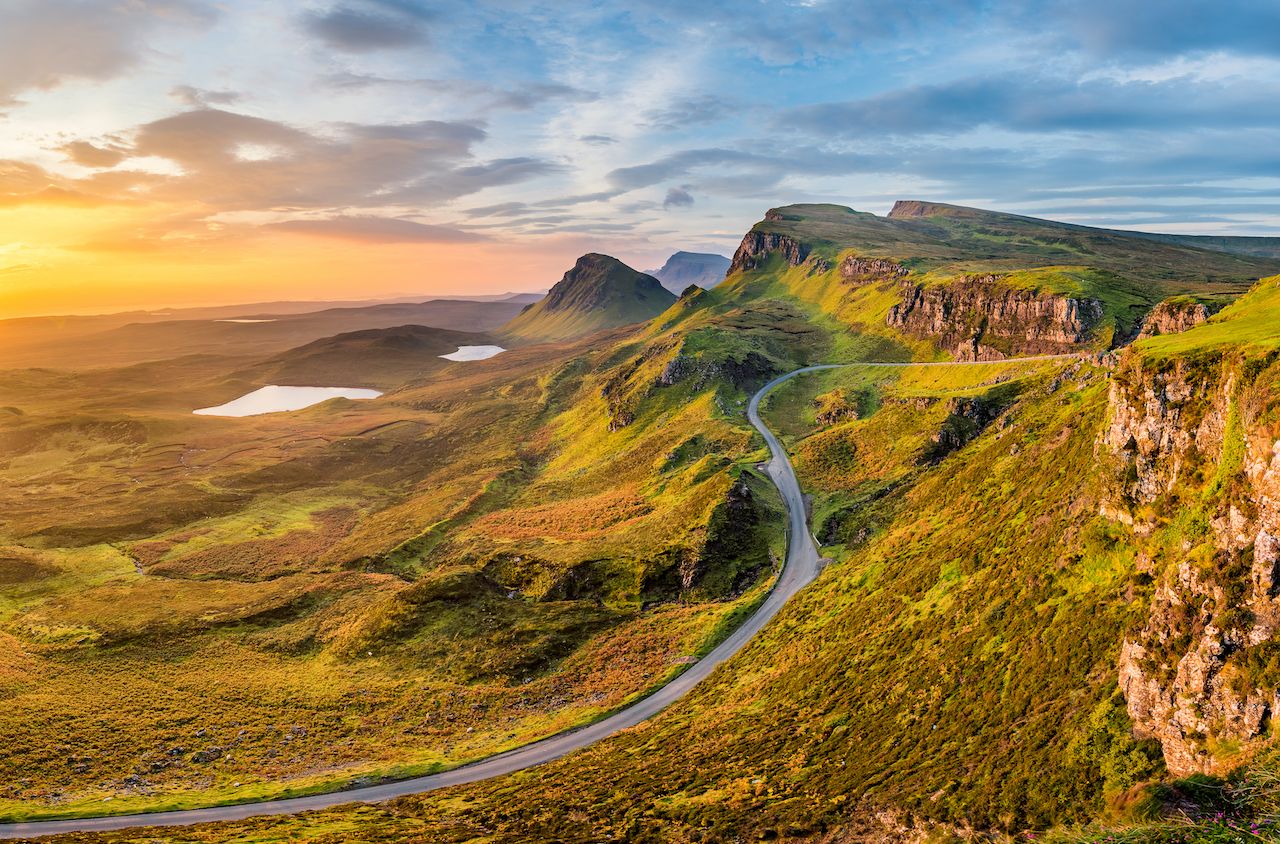 You’ll feel as if you’ve journeyed to another planet at the Quiraing. It’s another one of Scotland’s cliffs created by large landslides, but it has a distinct feeling of otherworldliness once you reach the top. Visitors can either hike or drive to the top then admire the scene before them. If you visit during the end of winter, just before spring, the higher land will be touched with just a bit of snow, providing a nice contrast to the green, brown, and red lands below. 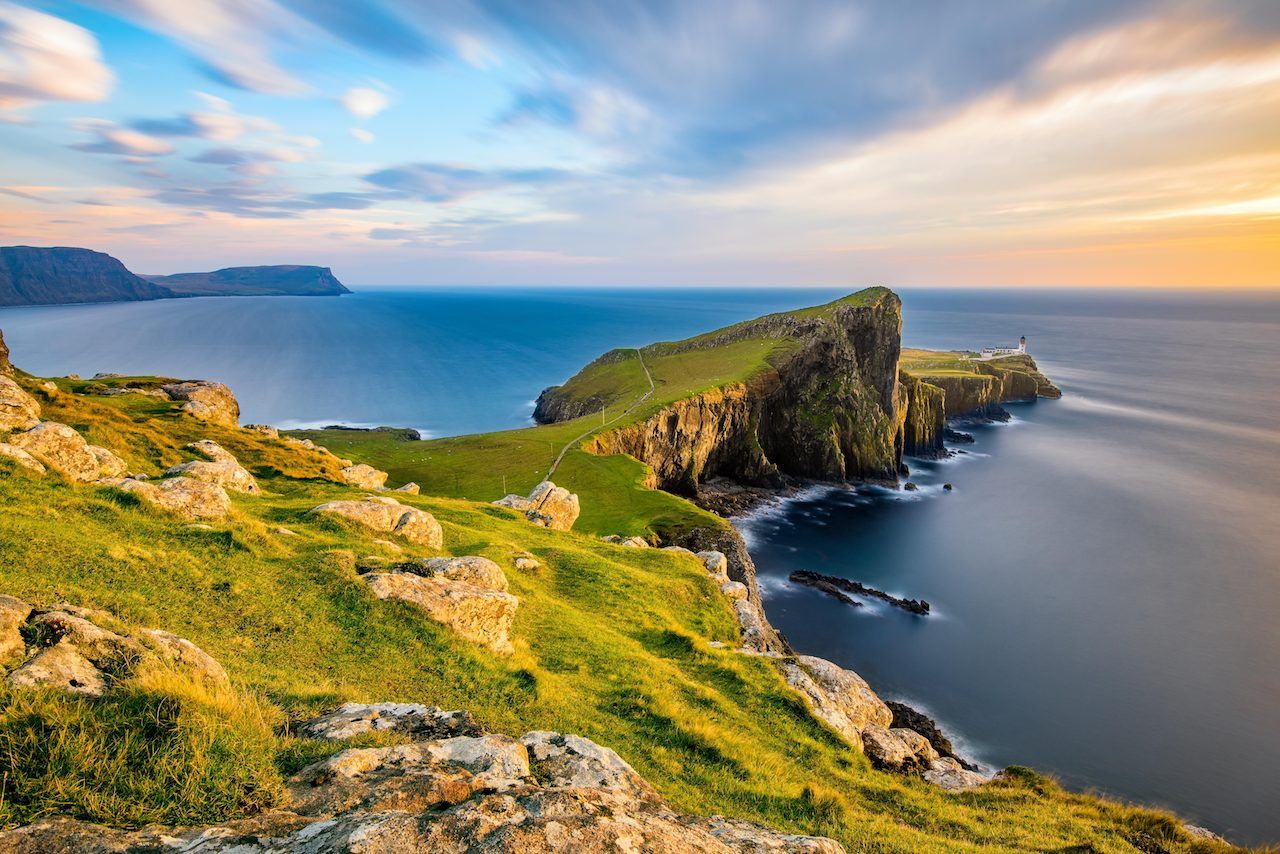 Neist Point is a viewpoint on the most westernly part of Skye. It’s one of the best places in Scotland to spot aquatic animals like dolphins, whales, and sharks. You’ll get excellent views over Moonen Bay to Waterstein Head and from the Minch to the Western Isles. The raised, slanted piece of land hides Neist Point Lighthouse from immediate view. Even if you drive there, you have to walk down the cliff and down a bunch of steps; it’ll take some work to get there, but it’s worth it.

7. Sligachan and the Cuillin Mountains 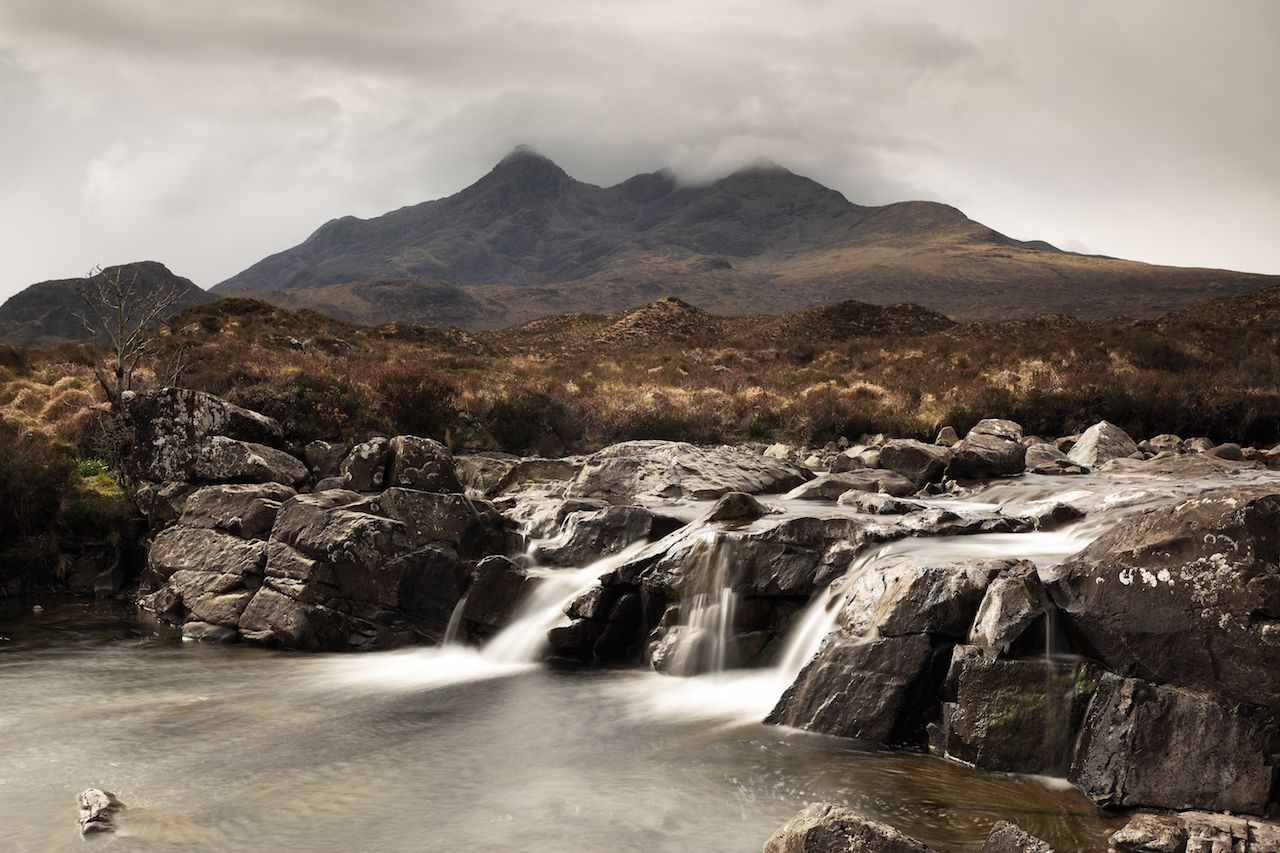 The Cuillins are seen as a large mountain range, but they’re actually separated into two: the Black Cuillin (the main one) and the Red Cuillin, which are separated by Glen Sligachan. The Black Cuillin is the most challenging range in the entire UK, over six miles long with a high point of 3,254 feet at Sgurr Alasdair. It has 11 Munros and 16 other summits. The Red Cuillin is easier to take on, but its highest point of 2,543 at Glamaig is nothing to laugh at.

Sligachan is a small settlement around nine miles away from Portree and close to the Cuillins, making it a great base if you want to pass through in any capacity. If you don’t intend to trek and just want to admire the magnificent mountains, then Sligachan is still your girl. Anywhere you stand in Sligachan, road or sidewalk, provides astonishing angles of the landscape. The best place, however, is Sligachan Old Bridge. Legend has it that the waters below are enchanted because the daughter of Scáthach, a fearsome warrior, was despairing over her mother’s potential loss in battle and was told by fairies to wash her face in the river. Afterward, her mother survived the battle. It’s said that if you wash your face in the river, you’ll be granted eternal beauty. 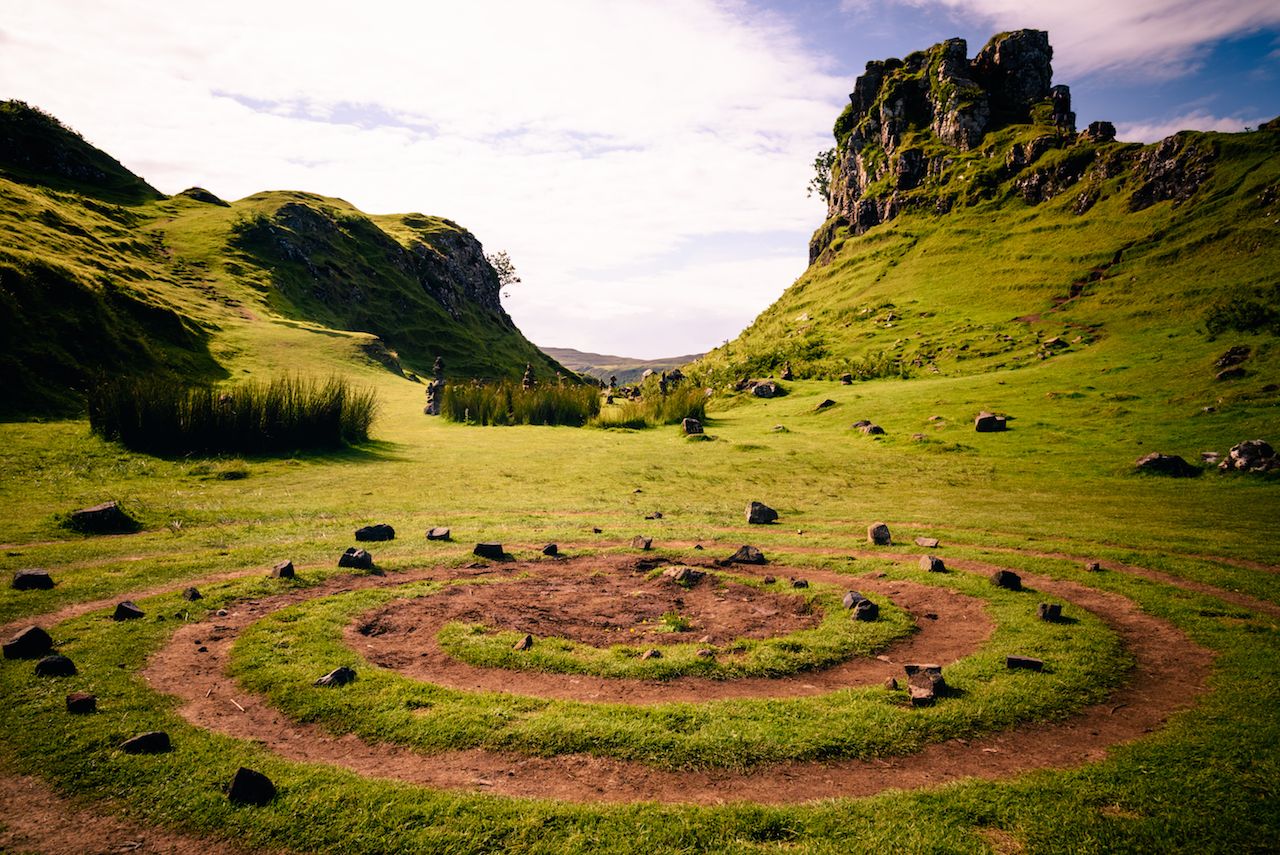 The Fairy Glen is a hidden landscape that’ll really make you feel like fairies are afoot and you’re walking into their home. Unfortunately, there aren’t any legends that tie the creatures to the land, and it was named as such because it’s just so unusual. The area is utterly enchanting, and you can easily lose track of time as you wander through the green hills and tree groves. Visit during the summer, so you can see when the colors of the area really come alive.

Galleries23 Real-Life Settings You Can Visit From Game of Thrones
Tagged
Entertainment Insider Guides Scotland
What did you think of this story?
Meh
Good
Awesome