For an inanimate bunch, garden gnomes have a tendency to travel. Entire colonies have cropped up in the wild, far from the front lawns they were made to decorate, appearing everywhere from the Australian outback to the woodlands of the Pacific Northwest. Liberation fronts, the most notorious of which operates in France, are behind some of their releases, yet others seem to relocate all on their own. However they’re getting around, an entire world of garden gnomes now exists below our treetops. Here’s where to spot a colony out in the wild. 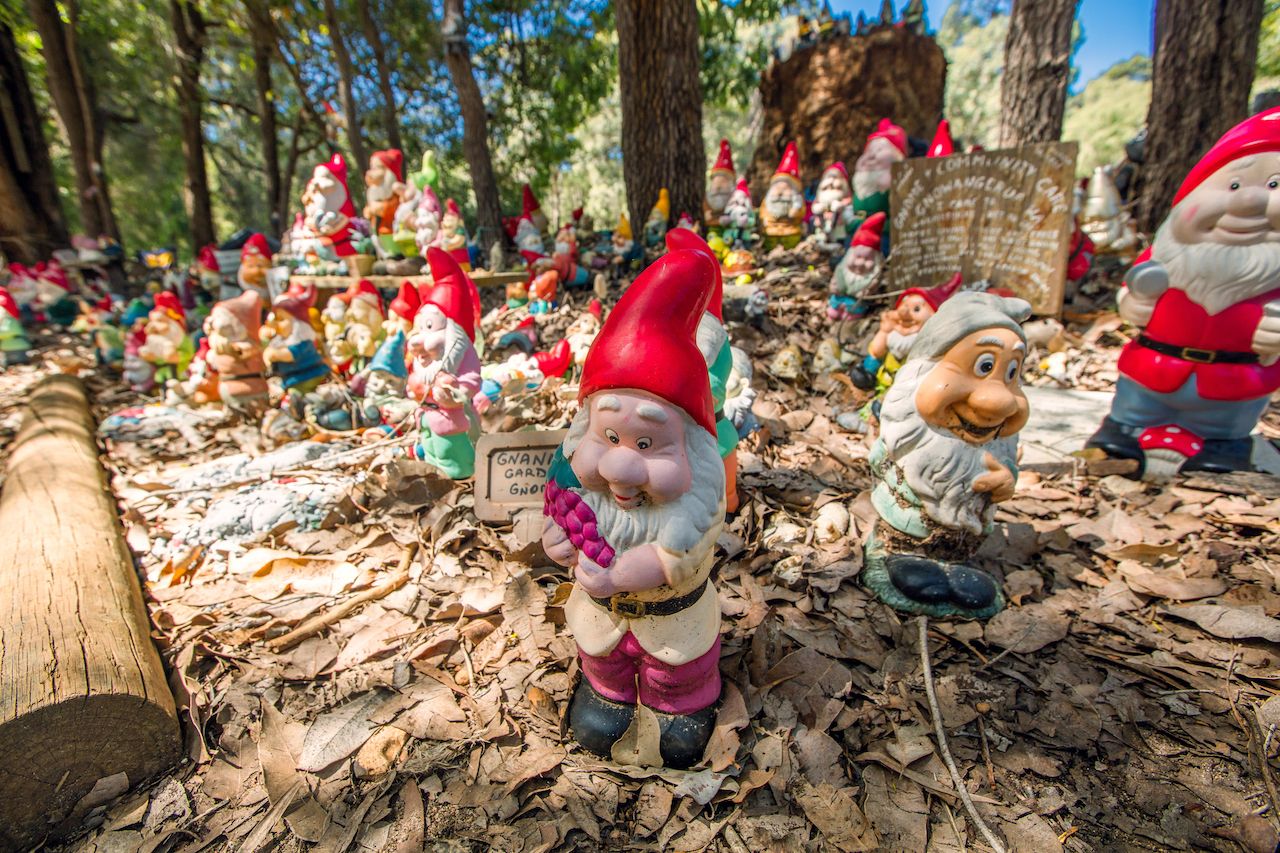 In a small pocket of the Western Australian bush south of Perth, garden gnomes outnumber people. An estimated 7,000 gnomes inhabit Ferguson Valley near the town of Wellington Mill, whose own population hovers around 200. No one remembers how Gnomesville began, but tourists keep the collection going, coming from around Australia and the world to leave figurines of their own.

All gnomes are welcome in Gnomesville: Visitors will see sporty gnomes mingling with artsy gnomes, gnomes engaged in leisure activities, and novelty gnomes dressed like Santa or one of Snow White’s dwarves. There’s even a time-out corner for naughty gnomes.

Garden gnomes are not the woodland creatures one expects to see on a nature walk. For some hikers in Maple Valley about 30 miles southeast of Seattle, however, this unusual fauna is the draw. Gnomes are hidden all along the Gnomes Trail in Henry’s Ridge Open Space. Many are hidden in plain sight, welcoming walkers from tree stumps and hollows. Altogether the trail is a gentle two miles out and back, perfect for exercising young legs and imaginations.

Deep in the forest of Red Feather Lakes, near the Colorado-Wyoming border, lives a community of gnomes and other tchotchkes. Signs reading Gnome Road and Elf Lane mark the colony’s location, where visitors are welcome so long as they’re respectful. “Do not take us, break us, or relocate us,” reads the Elf Lane sign, which also names these gnomes the keepers of the forest. 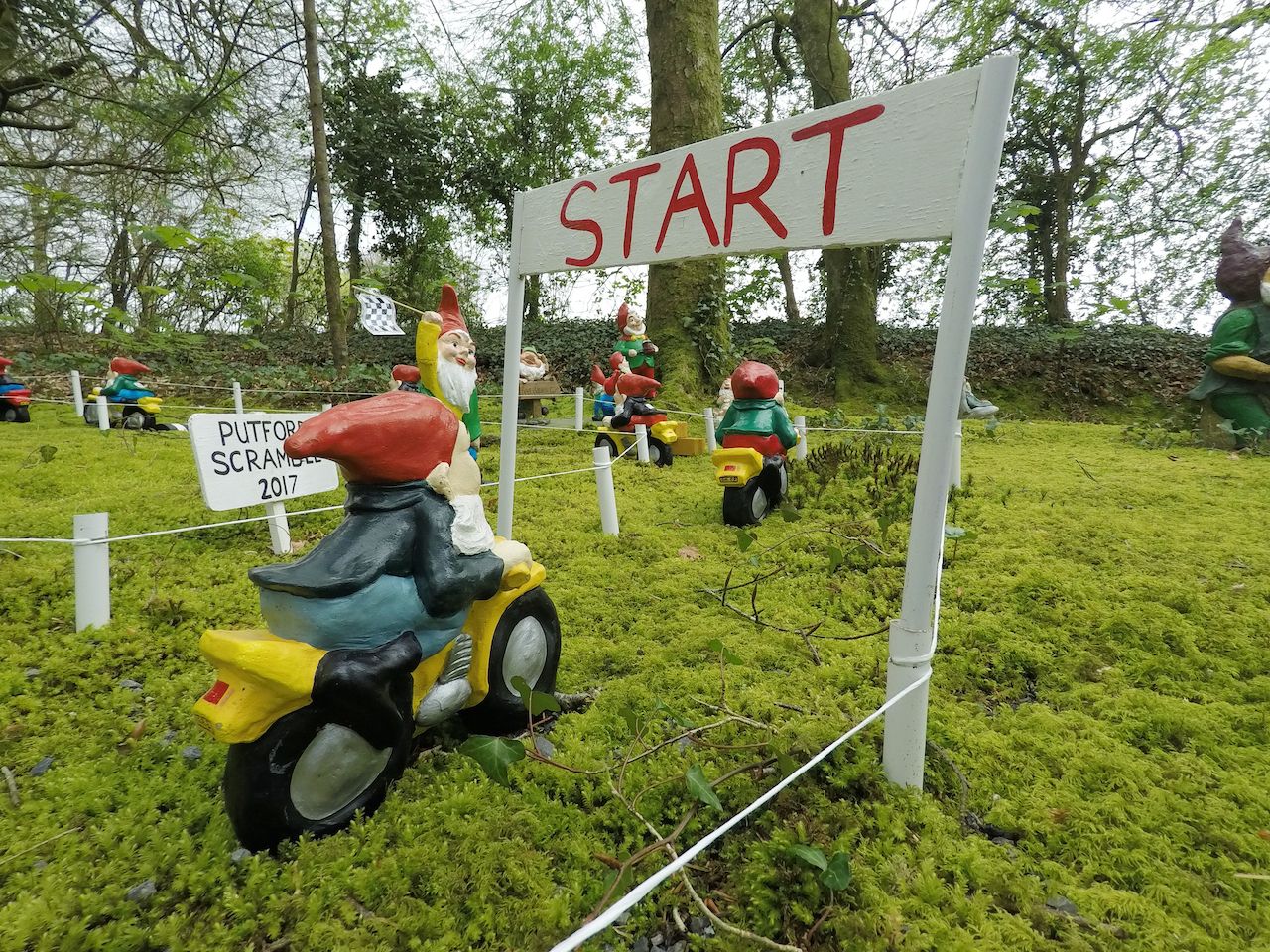 In 1979, Ann Atkin was inspired to start a gnome sanctuary in West Putford, England. Now a tourist attraction, the site covers four impressive acres, making it the largest colony in the world according to the Guinness Book of World Records. Most of the gnomes here are hard at play, whether engaged in a game of chess or busy mooning passersby. Anyone can pay them a visit between March and October when the Gnome Reserve is open to the public, and they can also check out the resident wildflowers.

Gnome-spotting is best left to the true believers in Bonney Lake, Washington. While gnome sightings are all but unheard of, geocachers have been known to visit in search of the gnome homes found throughout the small city. Inspiration for the 10 small doors that now decorate Bonney Lake’s parks and trails came from San Francisco’s Golden Gate Park, where a miniature door installed in a tree hollow became a local landmark. A tip for gnome-home hunters: Don’t miss the bonus tiny door at the Bonney Lake Library.

Yuraygir National Park sits midway between Sydney and Brisbane on Australia’s east coast. There, at the base of a eucalyptus tree leading into the park, visitors will find a collection of not only gnomes but also fairies, bears, birds, dinosaurs, mushrooms, and other miscellaneous figurines. Gnome Holm has been growing for years, with new residents mysteriously moving in and punny signs like “Gnome Sweet Gnome” being erected when no one’s watching.

Overland Park’s Firefly Forest created quite the buzz in 2013 when resident Robyn Frampton began installing miniature doors along the Tomahawk Creek Trail. Behind each one was a domestic scene scaled down to gnome size: tiny bedrooms with tiny beds, tiny tables set with tiny cookware, tiny fireplaces outfitted with flameless candles.

This unofficial city project was immortalized in an award-winning 2015 short film called The Gnomist. Though many of the gnome homes have been removed, locals still leave figurines in the forest, and a similar installation has been added to the Overland Park Arboretum and Botanical Gardens.