The Arctic holds a certain mystique for intrepid travelers. The ultimate adventure, it can sound daunting and inaccessible, but nowadays you don’t have to be a legendary explorer like Amundsen and Rasmussen to see it. There might not be a direct flight from your nearest major city, but the legwork to get there is worth it. Especially if you’re going to Greenland’s west coast.

Although Iceland has been hogging the spotlight of late, its hulking neighbor deserves more attention than it gets. Travelers who want to have a truly rugged Arctic experience, without vying for waterfall Instagram pics with dozens of tourists, should head to Greenland. If you’re willing to endure a layover or two — connecting through Iceland or Denmark — you’ll be treated to an unspoiled Arctic environment steeped in rich indigenous tradition.

Greenland’s western shores, in particular, are defined by dramatic glaciers, sleepy fishing towns, and nautical adventures that will make you feel like a modern-day Erik the Red. Here’s why Greenland’s west coast is the most epic way to see the Arctic.

An indigenous culture tied to the outdoors 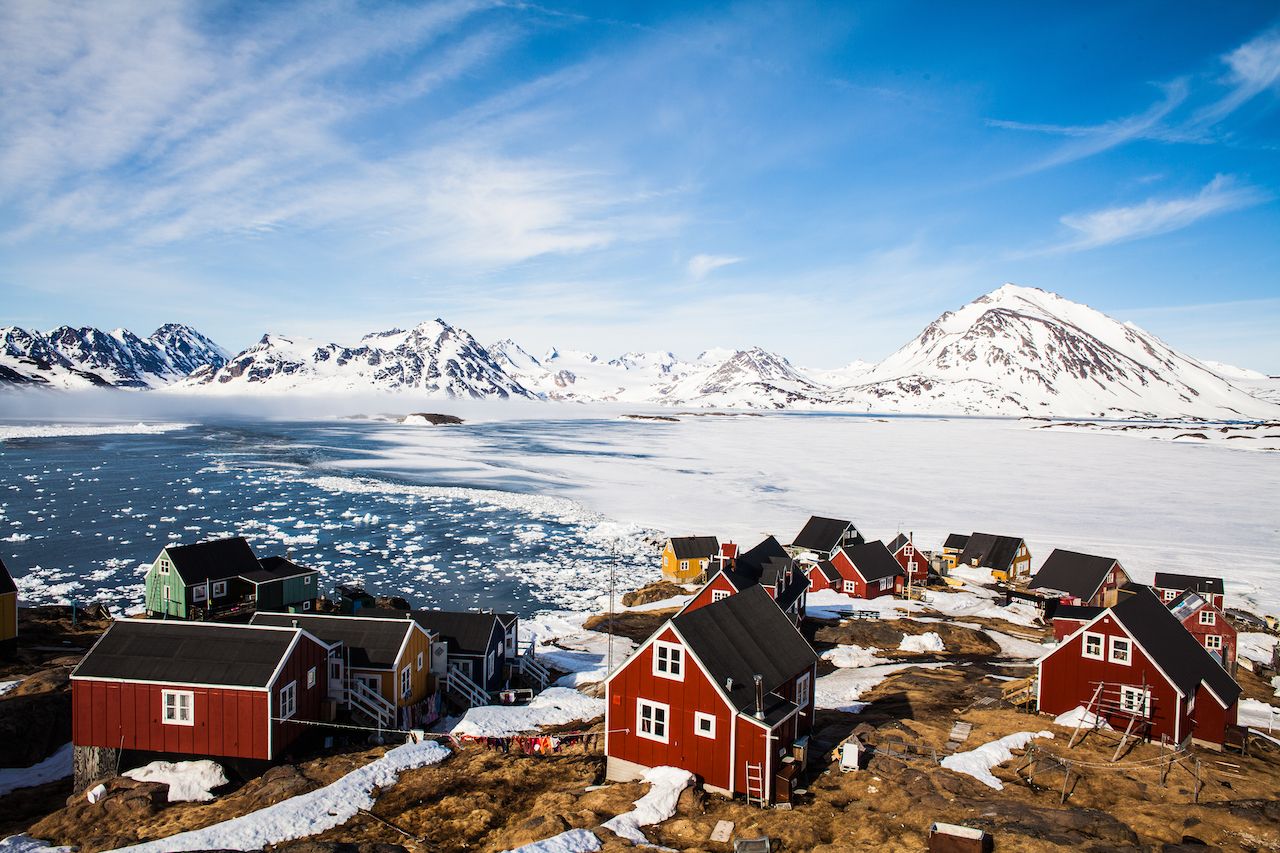 Nowhere is immune from the effects of globalization, not even the Arctic. No matter where you travel these days, it seems like that same Beyonce song is playing through the cafe speakers, and chicken fingers are always a menu option — but Greenland really is more remote.

It may be an autonomous territory belonging to Denmark, but it’s separated from Denmark and the rest of Scandinavia by more than just 1,500 miles. As opposed to Iceland, Europe, and the UK, whose native cultures have been heavily impacted by Western influence, Greenland remains steeped in its indigenous roots, making it a truly special travel experience.

Greenland’s population is about 85 percent Inuit and 15 percent Danish. That means that while the world’s largest island has certainly been exposed to some level of foreign influence, it retains much of its indigenous culture that stretches back thousands of years. The economy is still rooted in fishing and whaling.

Pretty much anywhere food is sold, seafood enthusiasts will have no problem finding locally caught shrimp and seal meat — and maybe some whale meat, although that is admittedly controversial and you’d be forgiven for passing on it. As to seal meat, you might be hesitant to try it, but there’s a reason it sustained people for thousands of years in one of the world’s harshest climates. Boiled seal meat with a side of locally grown potatoes is as satisfying as it gets.

Given the importance placed on the natural land in Inuit culture, it’s no surprise that many Greenlanders choose to spend their free time outdoors, even in unforgiving weather. Whether it’s camping in the wilderness, going on a reindeer hunt, or trekking across a glacier, a Greenlander’s casual weekend pastime is anyone else’s epic, once-in-a-lifetime adventure.

After a day of hiking across Russell Glacier, over an hour from the nearest town of Kangerlussuaq, I asked my guide, Karsten Aagaard, “So, what will you do this weekend when you’re not working?”

Aagaard, who was born and raised in the town of Tasiilaq, spends every day camping with visitors on the glacier and leading multi-day camping expeditions across the ice sheet. I thought he might say, “Well, I’ll probably take it easy.”

Nope. Rather, he replied, “Probably hunt for reindeer. Or maybe I will go back and walk on the Russell Glacier.” Indeed, this inexhaustible energy was evident in everyone I met along the west coast, and it’s infectious. 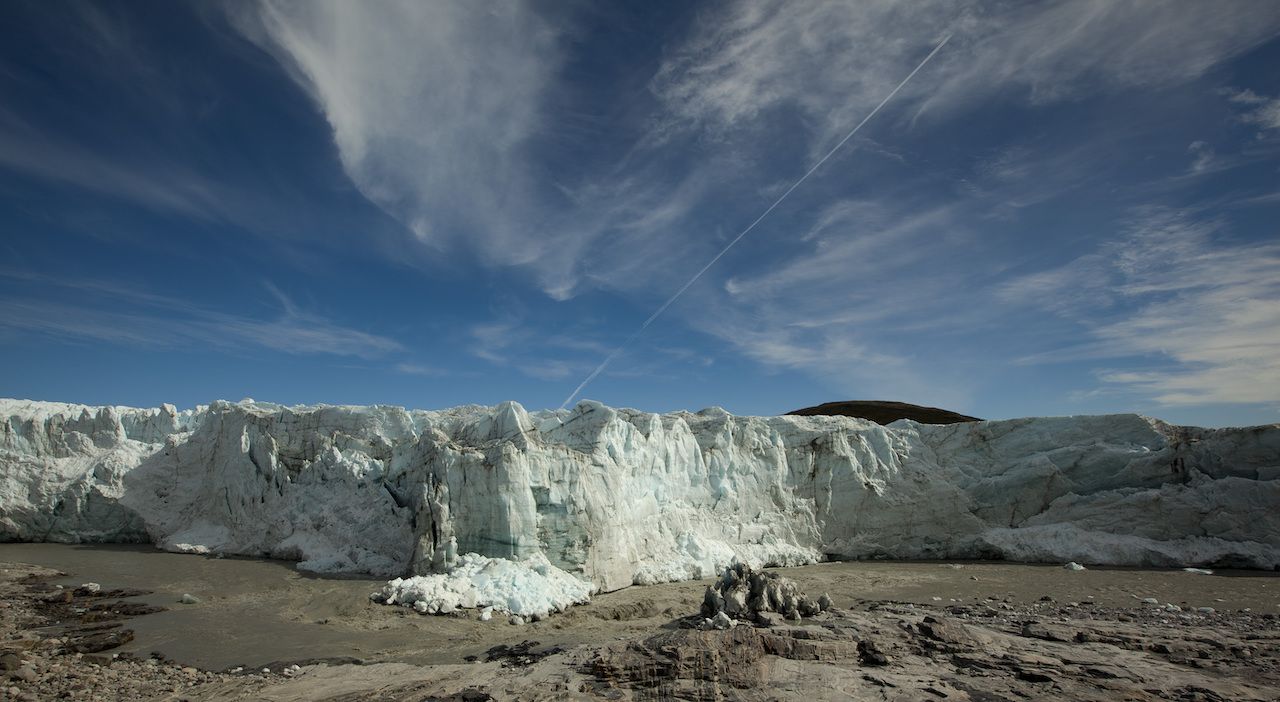 Few things in life will make you feel smaller than hiking across a massive ice sheet, miles away from the nearest source of electricity, not to mention another human soul. In Greenland, you can experience the Arctic environment in utter silence, savoring the tranquility that comes with that. Home to the second largest ice sheet in the world, behind only Antarctica, Greenland gives you plenty of ways to strike out into the wilderness and write your own glacial adventure.

Accessing this dramatic landscape is easier than you might think. Simply fly into Greenland’s largest airport of Kangerlussuaq, on the west coast, and book a tour with one of the local experts. Albatross Arctic Circle will pick you up at the airport and drive you about an hour and a half to Russel Glacier. There, you can choose excursions that range from casual sightseeing tours to ice fishing, multi-day dog sledding expeditions, and wildlife safaris. If camping for multiple days on the ice sheet sounds a bit daunting, go for the Full Day Ice Sheet Adventure. You’ll be outfitted with crampons, poles, a helmet, and a harness, and spend the day exploring the expanse of ancient ice. 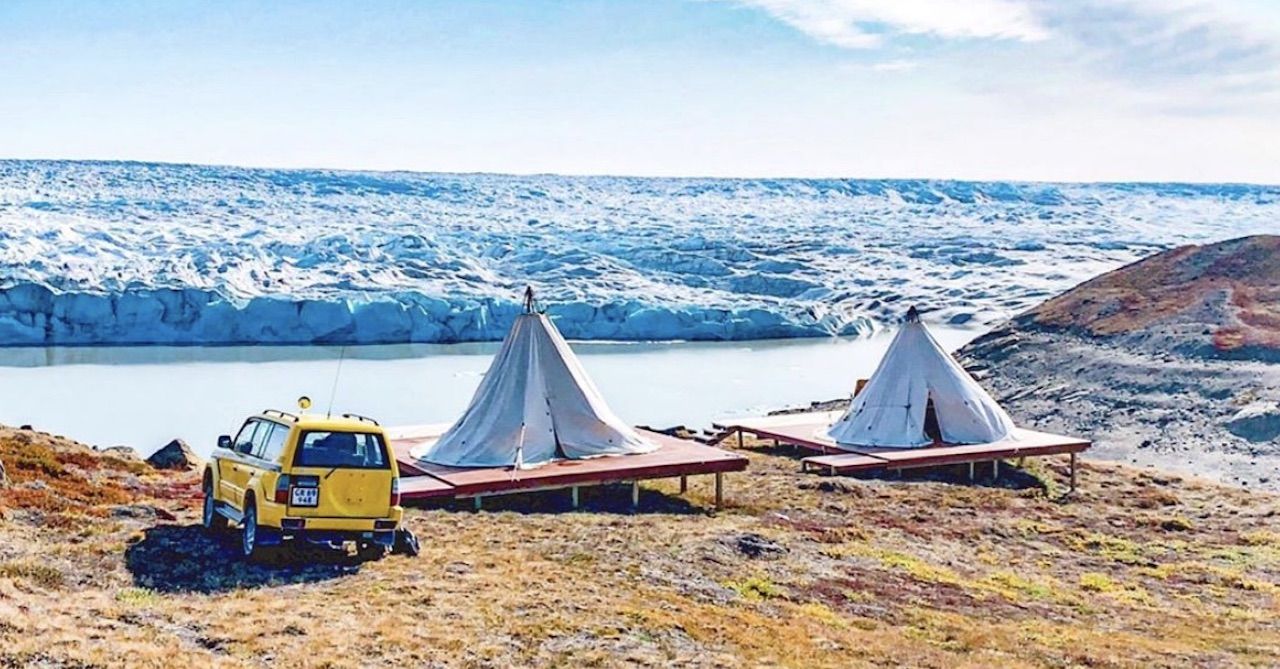 If you’re planning a 2020 trip, you’ll even be able to take advantage of the Greenland Glacier Camp. While only in the testing stage right now, the camp is situated on an overlook with a magnificent view of the glacier. It’s not exactly a luxury hotel, but you’ll have running water, bathrooms, and heated tents to keep you comfortable while you enjoy the peaceful surroundings. There will even be a restaurant which, if you’re lucky, will whip up some muskox sausages and lamb shank.

Small towns where the sea is a way of life 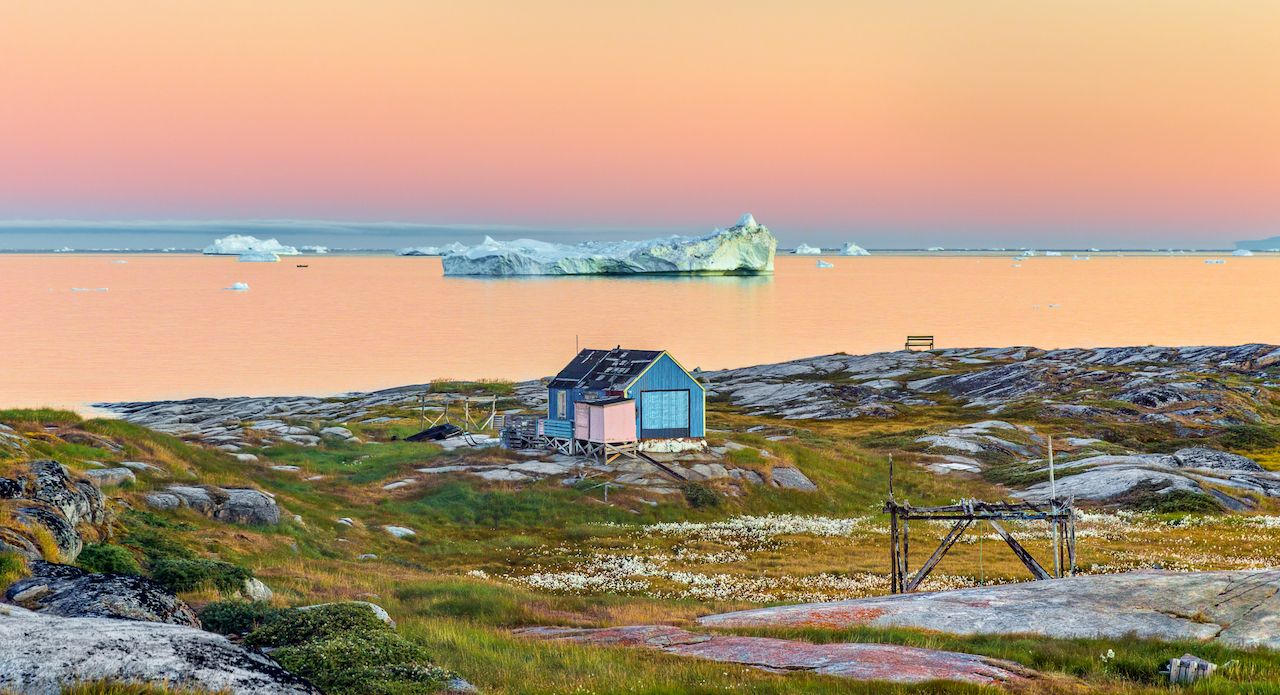 Exploring Greenland means getting acquainted with its many colorful fishing villages. Because there are no roads between towns, villages are relatively isolated from each other, meaning each has really developed its own unique character. From Kangerlussauq, take a short 45-minute flight to the even smaller airport on the island of Aasiaat on the edge of Disko Bay.

When talking to those who’ve spent their lives here, it’s clear they take a great deal of pride in their little town of 3,000 people, and though they can only access the rest of Greenland via plane or boat, no one seems to mind.

To Lauretz Sveltdson, an Aasiaat native, the sea is a way of life. Although he had traveled to other parts of Greenland, mainly to visit family, he said there’s little need to leave Aasiaat. Prior to his current work as a cook in the Seamen’s Home hotel, Sveltdson spent decades working aboard a fishing vessel. Although he’s traded in his fishing pole for a spatula, it’s obvious that the sea is where he feels most at home. And once you board a boat yourself, you’ll see why.

Sveltdson and I took a small vessel to a whale graveyard, passing shipwrecks, icebergs, and small islands on the way. As if giving me a tour of a house in which he has lived for decades, Sveltdson pointed out every inlet, iceberg, and shipwreck with casual familiarity. When he reached the whale graveyard, filled with dozens of massive baleen skeletons, it was a grim sight at first. As Sveltdson explained it, though, whaling is a way of life in Greenland — a practice done for subsistence, not sport. 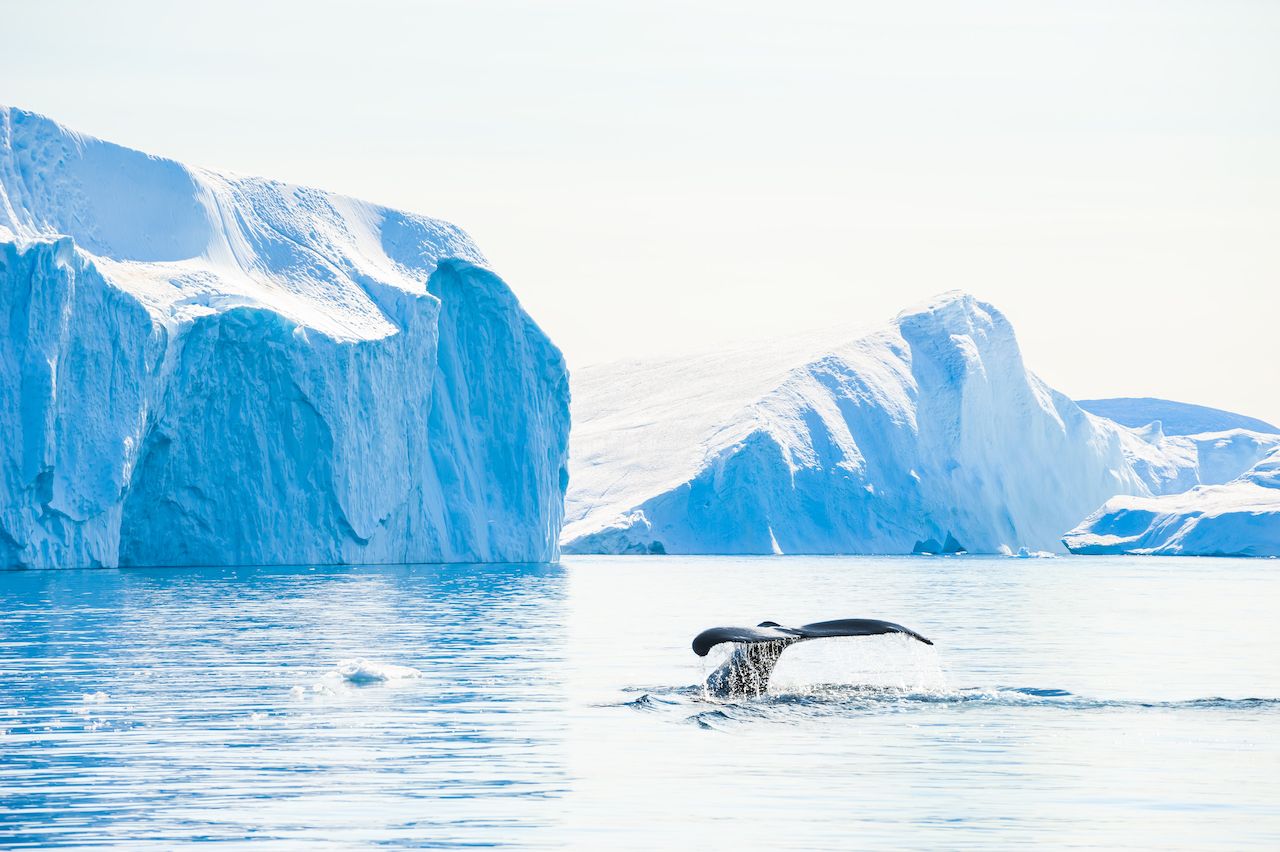 You can sign up for the whale graveyard tour, but if you prefer to see live cetaceans, take the ferry to Ilulissat for a chance to see humpback, minke, or pilot whales. Humpback whales are common in the Ilulissat icefjord, often traveling in groups of three or more, and the boat captains of Ilulissat Tours aren’t afraid to get up-close and personal.

Indeed, Ilullisat’s famous icefjord is home to some of the most epic icebergs in Greenland. Boat tours leaving from the city dock will reach the icefjord in under 10 minutes, and you can spend hours floating among the towering icebergs, watching massive chunks of ice calve.

Stepping into another world on Disko Island 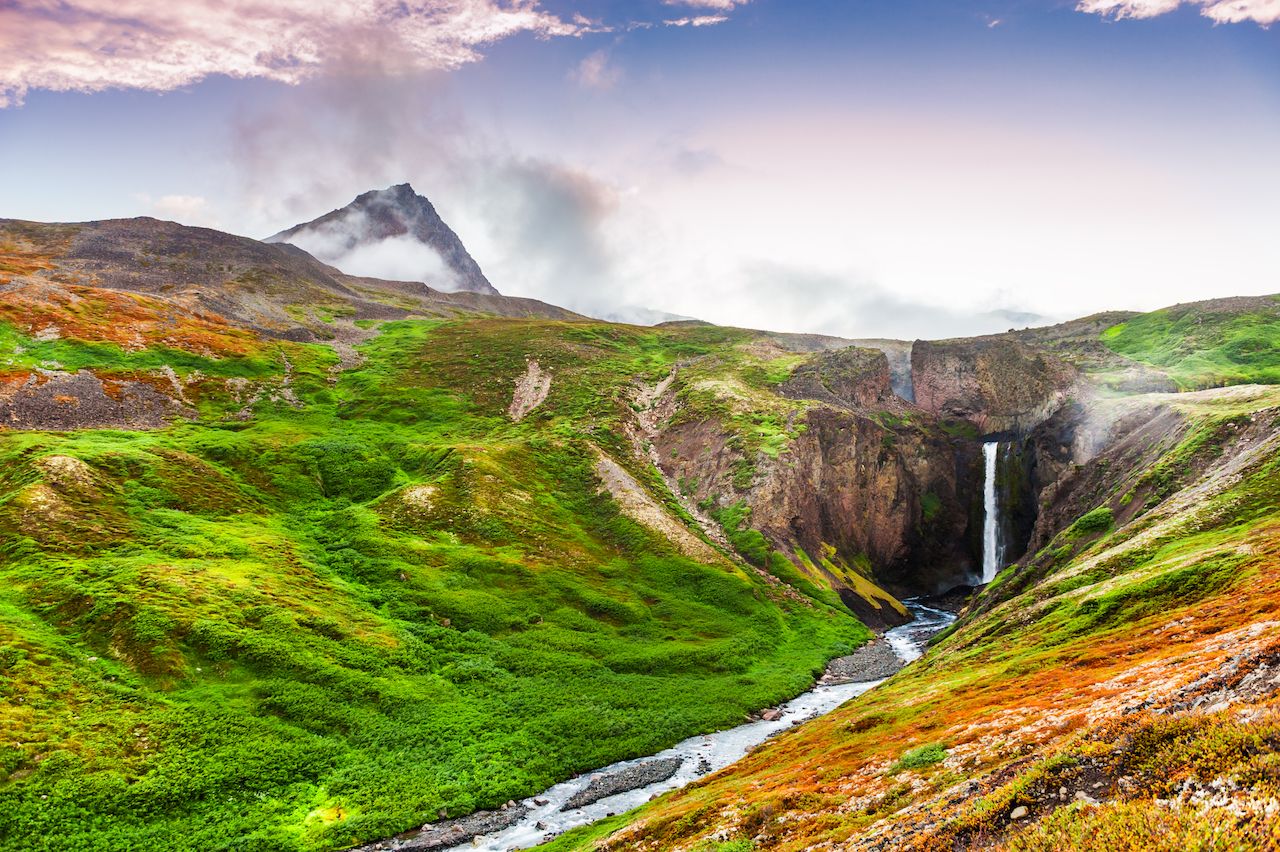 The most authentic way to experience Greenland, particularly the west coast, is by ferry. Since there are no roads, ferries are how Greenlanders get from one village to the next. But they’re more than simple modes of transportation — they can be adventures in themselves. Once you’ve explored the small islands of Disko Bay, take a ferry from Aasiaat or Ilulissat to Disko Island.

Disko Island is the biggest island in Baffin Bay, which is more like a massive arm of the North Atlantic Sea in which Disko Bay looks like a tiny inlet. The two-hour ferry ride isn’t the smoothest, but it brings you through a field of small icebergs that will keep you clutching your camera — and when the looming, primordial cliffs of Disko Island fade into view, you’ll realize that the choppy voyage was worth it.

Named for its disc-like shape, Disko Island is 3,300 square miles and home to sharp basalt mountains created by ancient volcanic activity. It’s also where you can find the Lyngmark Glacier — one of the only places in Greenland you can go dog sledding in the summertime due to its elevation. You will arrive at Qeqertarsuaq, the only town on the island and home to 845 permanent residents. Spend a few days in Qeqertarsuaq and you’ll learn what it feels like to live in one of the most remote and beautiful places in the Arctic. 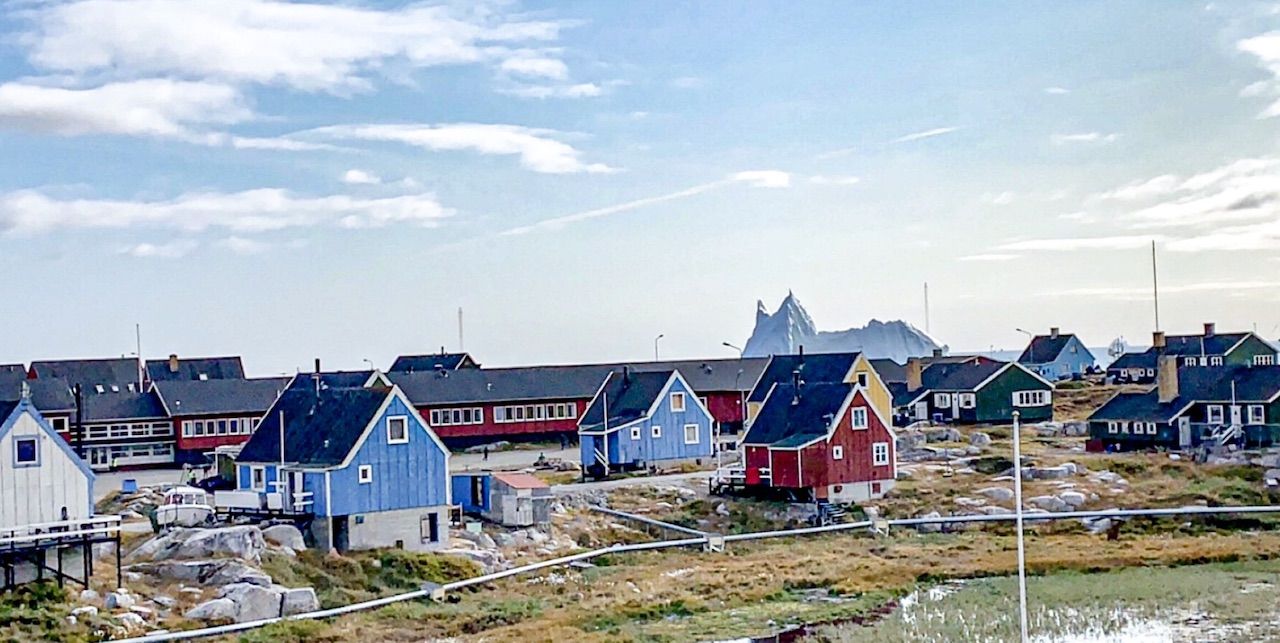 Nestled cozily on the bay, in the shadow of the towering mountains, the town is typical of Greenland’s colorful fishing villages. Relatively isolated from mainland Greenland, Qeqertarsuaq has a sense of community that you feel the moment you step ashore. Locals never fail to nod hello on the street, and everyone seems to be intimately familiar with one another. The Hotel Disko Island offers a range of excursions for exploring the vast island, including trips to the Lyngmark Glacier.

The Lyngemark Glacier hike takes about four hours each way, along a marked trail leading through the basalt mountains. One you’ve reached the top of the glacier, you’ll be rewarded with sweeping views of Disko Island and the surrounding bay. You can also choose to stay overnight in the hotel’s mountain lodge or take a dog sledding excursion on top of the glacier.

If you’re looking for a more casual trekking experience, you can walk from Qeqertarsuaq to Kuannit — an area with impressive basalt rock formations and an abundance of mosses, lichens, flowers, and angelica plants. During the walk, which is only about three hours round-trip, you’ll pass a volcanic black sand beach, iceberg-filled waters, a waterfall, and empty, rugged hills that feel as though they have been untouched for thousands of years.