As reports flood in from across the country of toilet-paper shortages and grocery store shelves picked clean, it’s difficult to not feel disheartened by inconsiderate neighbors. Food shortages created by panicked shoppers add more unnecessary stress for those who are especially vulnerable, like elderly, pregnant, and immunocompromised people. And then there are the people who simply can’t afford to stock up the one month’s worth of food they’ll need during shelter-in-place edicts, like service industry workers and freelancers who face shorter work hours, layoffs, and closed restaurants and bars that were once a source of their entire income. But there’s hope for humanity yet: Community-led, grassroots efforts are providing much-needed staples from fresh produce to toilet paper for people in need. One such effort is taking place just a short distance from my home, in Jersey City.

David Trotta founded Whealth Kitchen in Jersey City’s Journal Square neighborhood in 2014. Trotta has always had an eye for social outreach (he has opened up Whealth Kitchen to Jersey City’s homeless on Christmas, for instance). On March 14, Trotta came to the difficult decision to close Whealth to the public to help stymie the spread of the virus, but he couldn’t stop at closed doors to keep the virus out. He would have to find another way to use his resources not just to feed people — but to keep his restaurant in business.

“We felt the need to do something for the community that has already supported us, and given us so much,” Trotta tells me.

On March 15, Trotta posted a message to Whealth Kitchen’s Instagram page announcing that, though the cafe itself would be closing, the meal delivery service would continue. He urged anyone hoping to support Whealth by subscribing to a meal plan, then in a subsequent post wrote that his farm partners, who provide produce to the cafe, had donated food for additional meals. “If you know someone in need we will feed them, no questions asked, DM us,” he added. 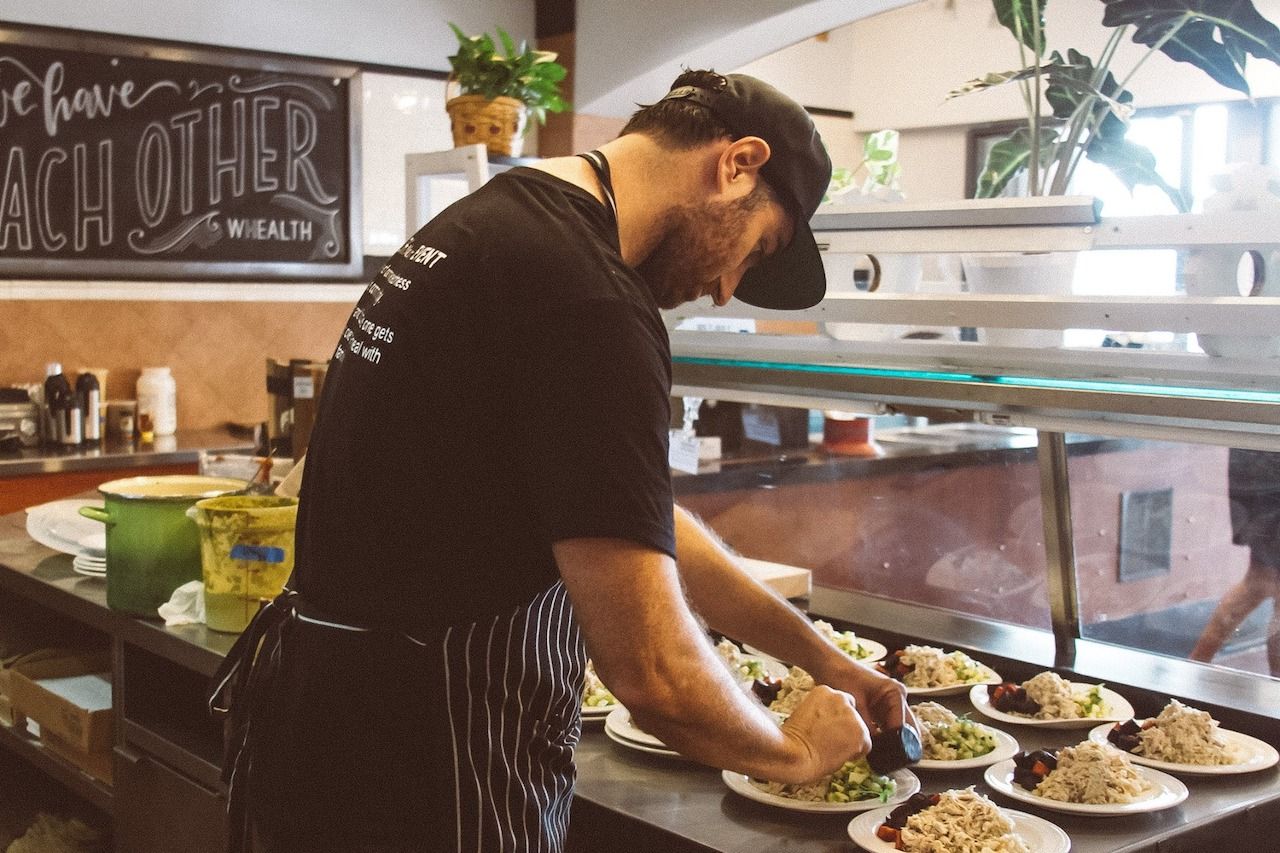 Trotta launched a meal delivery service eight months ago. Now, with a curfew in place in Jersey City and most restaurants only offering delivery anyway, it seemed more important than ever to use the service not just to help keep Whealth afloat but also to help people without the resources to shop or leave home.

“People want to help,” Trotta says. “They want to give me money for food to give to people, and I have been saying why don’t you just buy a meal plan and just add in the allergy section, ‘this is a donation.’ That helps us stay in business.”

Since March 15, Trotta has been posting messages to his Instagram account encouraging service industry workers, freelancers, and anyone else afraid to spend their savings to DM him with their needs, and he’ll send over a meal kit, free of charge (he offers options like shepherd’s pie, lentil salad, chili, and veggie burgers). Before the outbreak of the virus, Trotta typically made as many as 35 orders per week. In the last two weeks, that number has increased to 50.

It might not sound like much, but it’s a life-saving measure for families facing dire straits. He’s received messages from teenagers, saying, according to Trotta, “Hey I heard I can get food from you. My mom just called because they’re cutting her hours, and the whole family is stressed out.” He’s in the midst of finding volunteer drivers to deliver meals to women who are nine-months pregnant, one in Greenpoint and another in Williamsburg, who can’t leave the house.

This project doubles the benefits to small businesses like Trotta’s: Donations feed people without the resources to buy groceries and also give Trotta a much-needed revenue stream while the cafe is shuttered. Restaurants across the country are in an alarming position: As restaurants continue to shutter in the interest of public safety, The National Restaurant Association predicts the loss of between five and seven million jobs over the next three months, putting chefs out of business when they can’t pay rent and leaving hospitality workers with no source of income with which to support themselves.

Small but impactful acts of support might be the best way individuals can keep their local restaurants afloat for the time being, and they’re popping up all over Jersey City: In downtown Paulus Hook, breakfast spot Sam A.M. sold fresh produce and toilet paper out of its storefront for one day before becoming concerned that lines would needlessly expose people to the virus. In The Heights, Italian restaurant Corto is offering pick-up and delivery of pre-made pasta kits, which include sauce and homemade pasta that families can assemble at home.

Trotta plans to keep the delivery service going for at least six months, ramping it up especially in the next three months. But he believes the situation will only worsen as people return to work, repay debt, and potentially be required to pay back rent. So far, Trotta says the response from his community has been enthusiastic. His farm partners in the Hudson Valley have eagerly donated produce like boxes of carrots and tomatoes, but charitable individuals have really stepped up to improve the lives of strangers.

“The craziest thing to me is people that started buying meal plans to support me, to support the community,” Trotta says. “People have been coming out of the woodwork with products that I can prep or products that I can give people, and I have just taken it upon myself to feed literally anybody that comes our way.”

Food + DrinkThis Italian Grandma Is Holding Virtual Pasta-Making Classes To Keep Us Connected
Tagged
Restaurants + Bars
What did you think of this story?
Meh
Good
Awesome

What It’s Like To Eat at Iceland’s Hotel Flatey, One of the Most Remote Restaurants in the World