Curry isn’t actually a spice. Granted, in America, we’re used to strolling up to the spice aisle and picking between a few different jars of curry powder. Or, for the more adventurous, going to the local farmers market and picking between two dozen different curry “blends.” Yet curry on its own isn’t an actual spice but rather a mix of spices. And if you associate curry with India, well, curry powder doesn’t exist either. Curry around the world, from India to Thailand, is a spicy, creamy, and tangy dish loaded with vegetables and meat.

“Back home, we don’t have anything called curry powder; that doesn’t exist in India,” says Meherwan Irani, chef and owner of Chai Pani restaurant in Asheville, North Carolina. “Curry is a dish, by itself, that’s specific to South India. We don’t just go to the store and buy a mixture of spices and call it a curry.”

The name comes from the Portuguese, who used the word carel to describe the spicy, fragrant dishes they found after arriving in India. That became “curry” when the English adopted the word, and over time, it’s turned into a generic term for almost any Indian dish with a sauce.

As those countries formed trade routes and colonized the globe, curry went with them. And today, you’ll find curry around the world, everywhere from Japan to Trinidad — none of which are the same. Additionally, none are really a “curry” in the Indian sense of the word either.

Though “curry” is a vastly inclusive term, to clear up confusion around some of the more common ones you’ll find in America, we talked to some chefs to find out what makes a Thai curry different from a Jamaican curry different from an Indian curry. Here is everything you need to know about curry around the world.

Note: These are by no means the only curries in the world. Trade and colonization brought curries throughout much of Asia, giving us Singapore street noodles, Malaysian kari ayam, and other coconut-and-peanut-based curries. You’ll also find curries in Japan and parts of China, though the curry flavors aren’t nearly as prevalent as they are elsewhere. Even Norway has some curry dishes, like curried lamb and curried salmon. And, really, with enough turmeric and garlic, you could add curry to almost any cuisine. Though the name is used almost generically now, it still makes one’s mouth water any time you hear it. Just know that not everything that’s a curry is the same, nor should be your expectations. 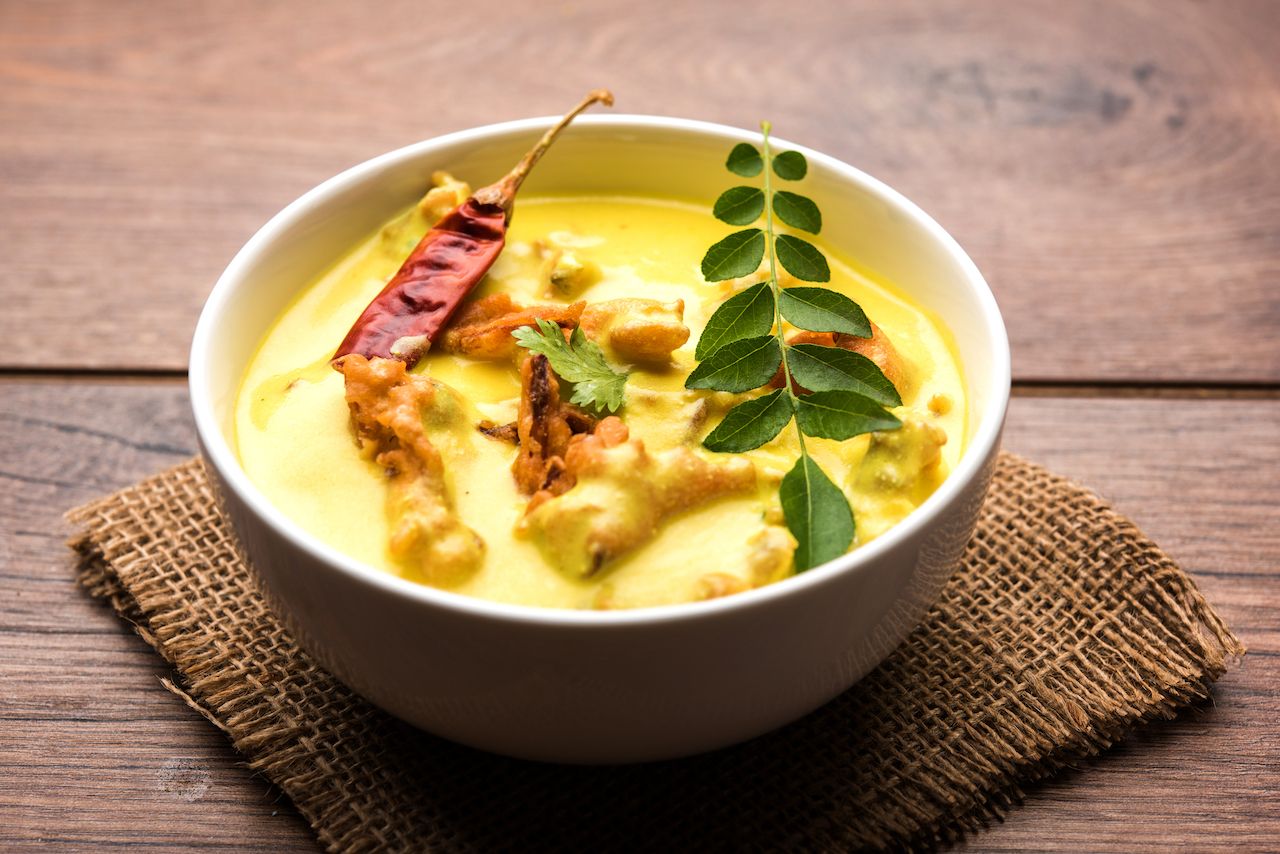 Characteristics: Traditional Indian curries are generally based on coconut milk with a salt or acid component like lime juice, garlic, ginger, tomatoes, onions, and two spices, usually turmeric and curry leaves, sometimes cumin. Further inland, dried coconut replaces coconut milk, and you’ll find other meats like chicken used instead of fish. Coastal Indian curries will be more coconut milk and turmeric based, with a yellowish color. Inland curries use more tomatoes and are redder in color.

“Though even in India,” Irani warns, “you’ll find three different people arguing over what a curry should be.”

Origins: Curry was primarily developed in southern parts of India, and though you might see recipes for North Indian curries, this is more just a generic term for sauce-based dishes from that region. As Irani said, it’s really only one dish, not an entire collection of dishes. And definitely not a spice blend. Initially, it didn’t have much in the way of tomatoes, onions, garlic, or ginger, but when Europeans came to India, they brought those ingredients, simultaneously borrowing and helping to develop food in another land. 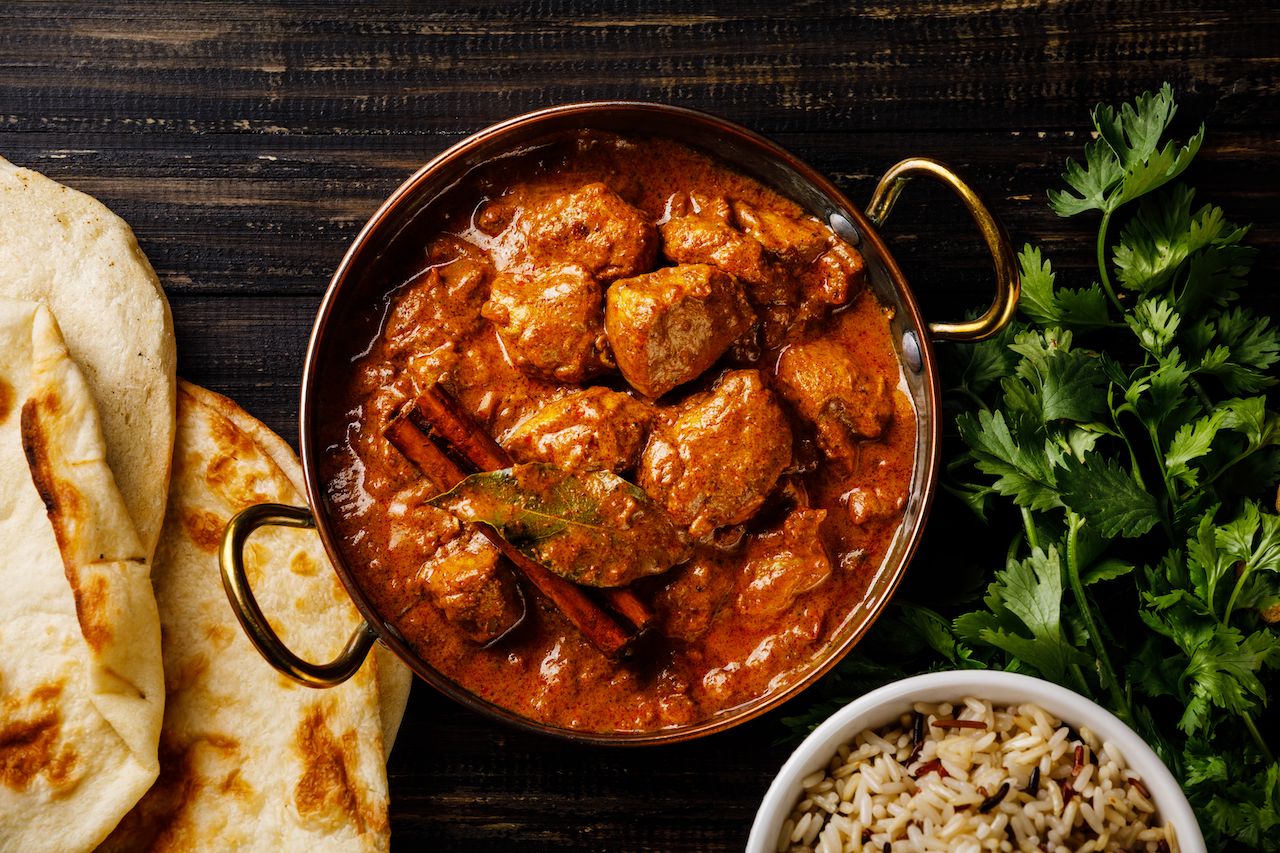 Characteristics: British curries are, for the most part, Madras curries, which are heavy in tomatoes, onions, garlic, and ginger. They’re also often spicy and still have a coconut milk base. Because of the abundance of tomatoes, curries in England also usually redder than other curries.

Origins: The British East India Company had a trading post in Madras (now Chennai), so the style of curry they learned was the one native to that region. There are a number of popular legends of how, exactly, the spices came to be used in the UK, but as Irani put it, “Some enterprising businessman must have figured out a way to get the spices that made up the curry in Madras — usually turmeric-based — and made up a powder.”

That powder was then exported back to England, and housewives who wanted to cook in the Indian style would use the powder, add it to milk or coconut milk, and call it a curry. That’s changed over time with immigration, but the original British curry falls along those lines.

Jamaica and the West Indies 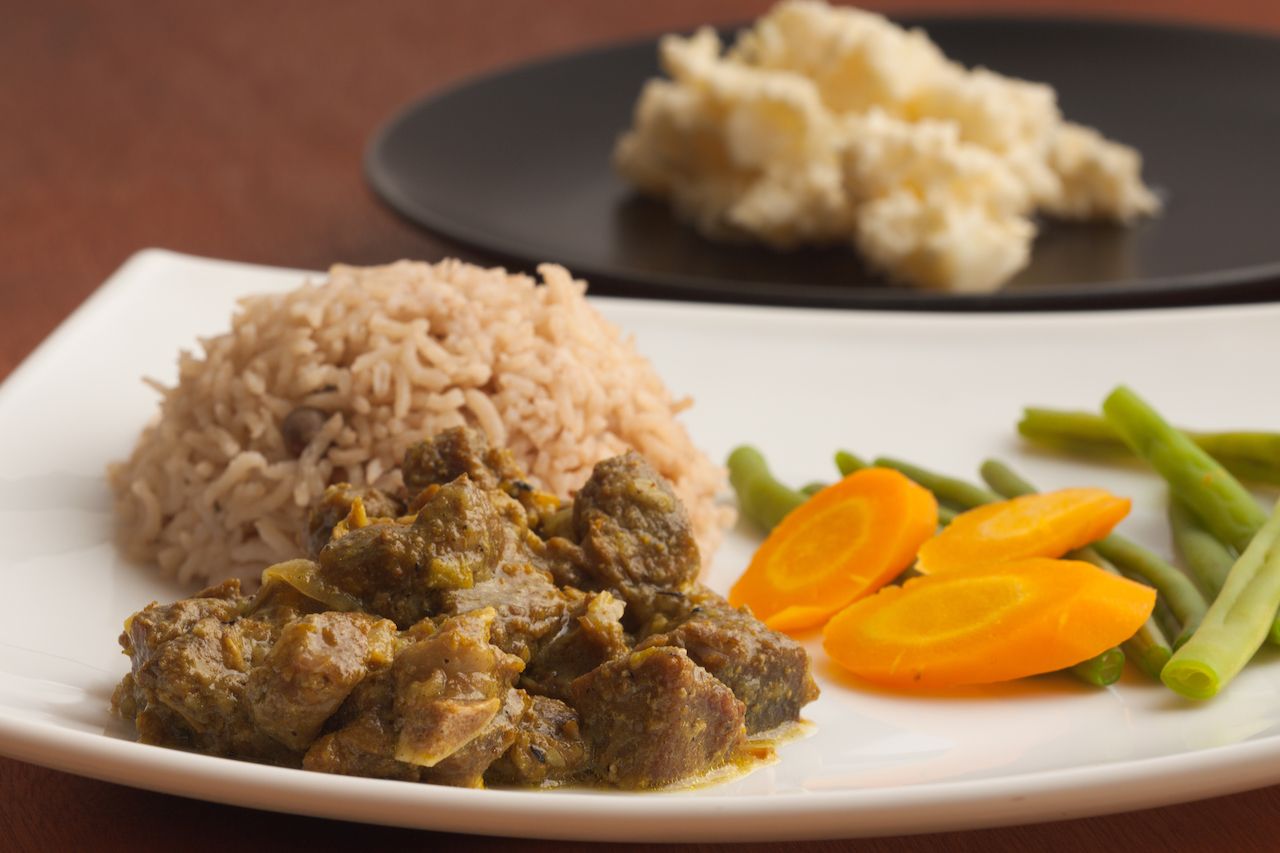 Characteristics: Caribbean curries, unlike in India, are generally prepared with pre-made curry blends high in turmeric. They often include cumin, paprika, cardamom, garlic, and fenugreek. Those are then made into a paste or powder that’s added to a protein and set to marinate before cooking. The powder is also added to the pan before cooking, creating popular dishes like curry goat and curry chicken.

“Jamaicans, we like to see that bright yellow,” says Hugh Sinclair, a native Jamaican who goes by Chef Irie and hosts “Taste the Islands” on public television in South Florida.

You’ll find this style of curry throughout the British West Indies, varying slightly from island to island. But places like the Cayman Islands (which used to be part of Jamaica) and other islands nearby will have very similar styles.

Origins: Jamaica’s curries were heavily influenced by British colonial rule, and as such, they’re based more on pre-made curry mixes than anything families make themselves. That said, once slavery was abolished and Indians came to the islands to work in the sugarcane fields, more Indian-style curries became prevalent. So while the traditional Jamaican curries are more popular, you can find Indian styles throughout the country.

“In Jamaica we have a large Indian population, and in Indian households they’re making their own curries,” says Sinclair. “They’re mixing the spices in real time when cooking the dishes like they would in mainland India. 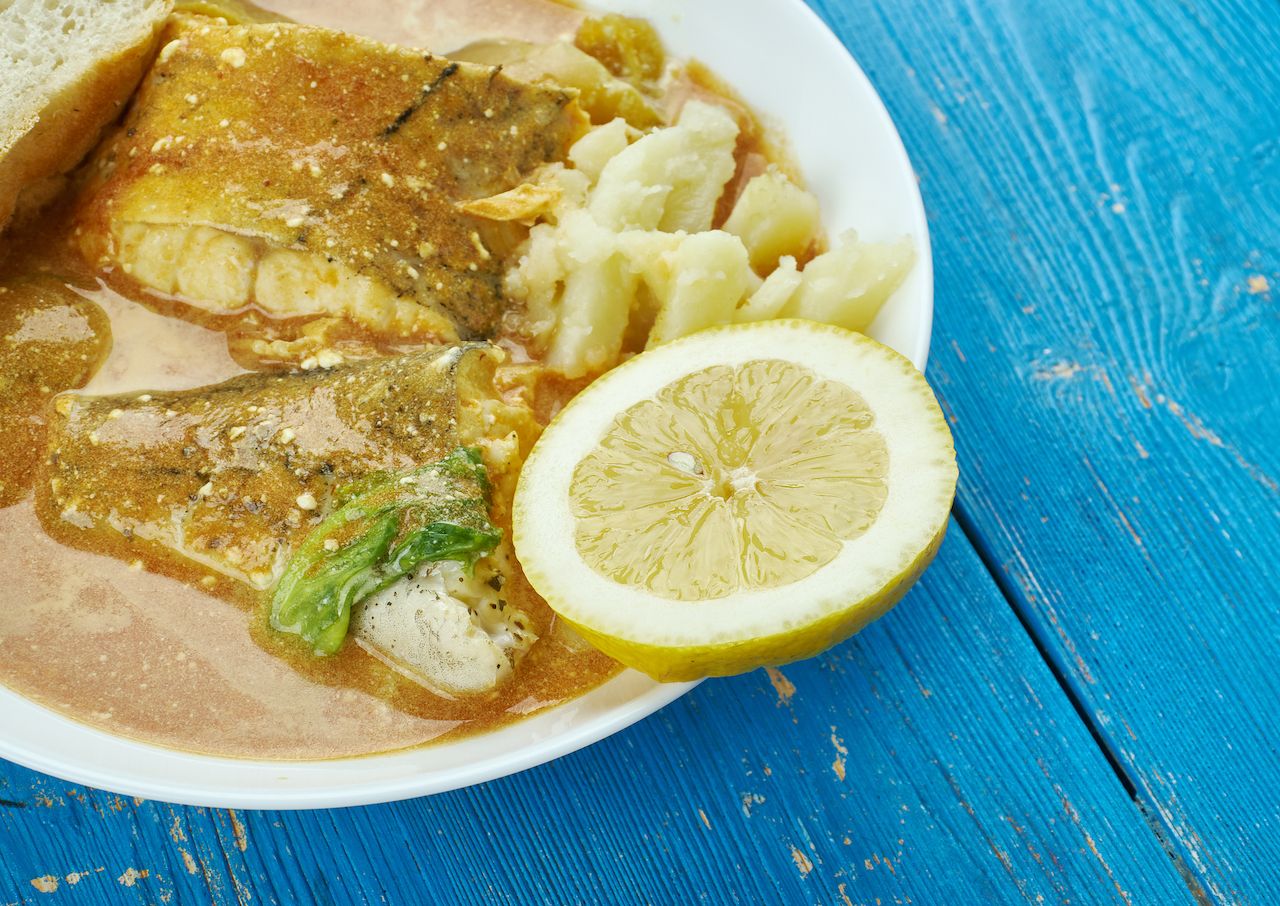 Characteristics: “Tridadian and Guyanese curries are darker in color from the beginning, before they get applied to the protein,” says Sinclair. “They add masala ingredients, often times jeera, and ground or roasted cumin. This is totally different than Jamaican curry, really only people who are Indian make curry with jeera.”

Because these former colonies in the southern Caribbean have far more Indian influence than islands farther north, you’ll find curries served with roti, potatoes and curry goat, lobster, chickpeas, duck, and other proteins native to the islands.

Origin: Though Trinidad and Guyana were also British colonies, the main curry influence came with the wave of Indian immigrants who arrived in the mid-19th century. This is why curries in this region are more like traditional Indian curries, where Jamaican-style are more British. 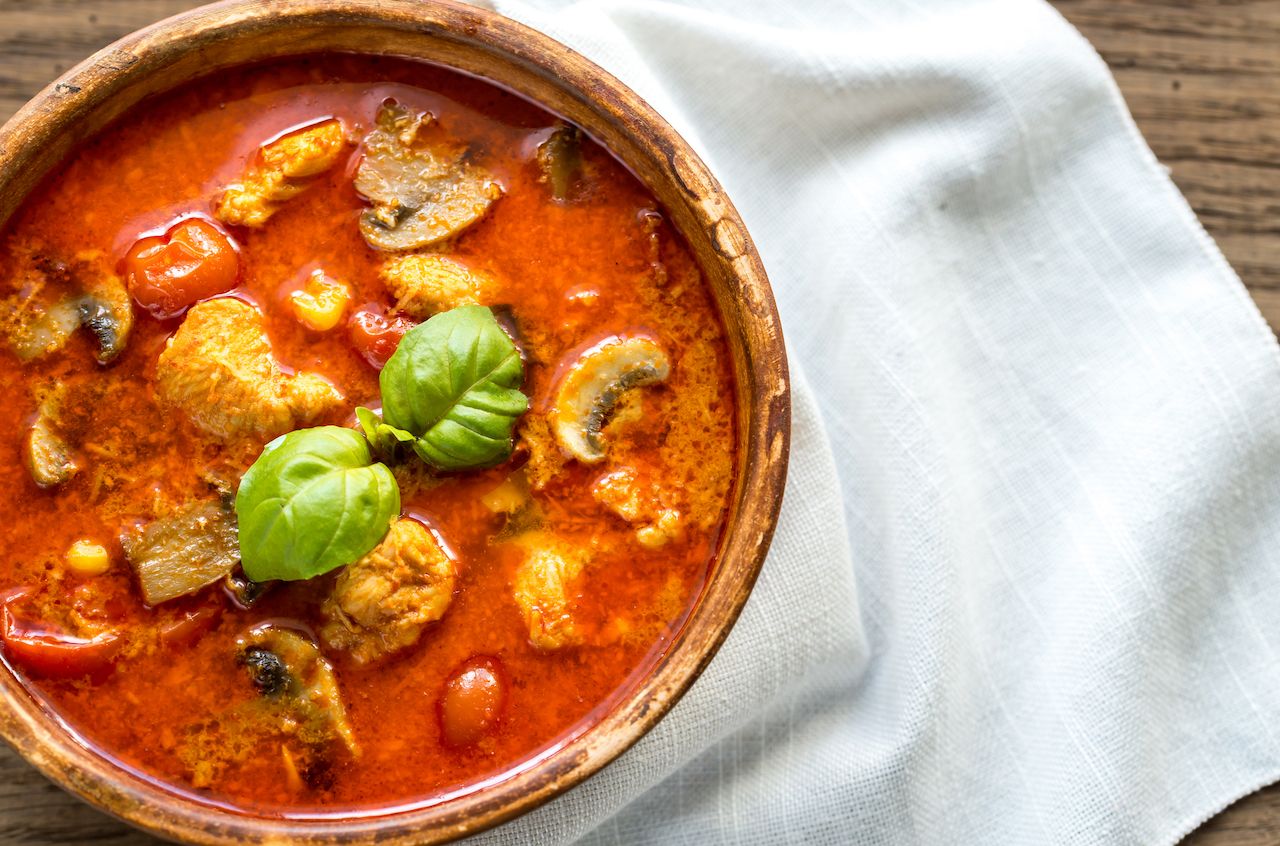 Characteristics: Thai curries are generally soupy, coconut-milk based dishes made with a curry paste and some kind of protein. The three main varieties are red, green, and yellow, originally only differentiated by the types of peppers used to prepare them. Over the years, though, that has changed, and the general makeup of Thai curries are as follows:

Origins: Before the British made their way through on trade ships, Thailand had its own native curry dishes called kaeng. But as the opium trade in Asia grew, curry powder became a popular “cover” cargo, and ingredients like turmeric, cumin, and coriander began to find their way into Thai curries. That addition was the main advent that created the Thai curries we know today.

Food + Drink11 Indian Curries That Are Infinitely Better Than Chicken Tikka Masala
Tagged
Food + Drink
What did you think of this story?
Meh
Good
Awesome