Before every match, the men of New Zealand’s national rugby team, the All Blacks, have a ritual: They assemble on the pitch facing their opponents; assume a low, squat-like stance; and perform a haka, or traditional Māori dance.

It’s a scene spectators around the world have witnessed, rugby fans or not. Recordings of the All Blacks performing the “Ka Mate” or “Kapa o Pango” haka have racked up millions of views on YouTube and social media. Videos of schoolboys, wedding guests, and even actor Jason Momoa performing a haka with members of Auckland’s Ultimate Fighting Championship team at the premiere of his Aquaman film have also gone viral. Yet despite the growing global awareness of the Māori custom, those less familiar with New Zealand’s indigenous culture or national sport may be surprised to learn that the Black Ferns, the women’s rugby union team, also perform a pre-game haka, or that Māori women traditionally participated in the practice at all. 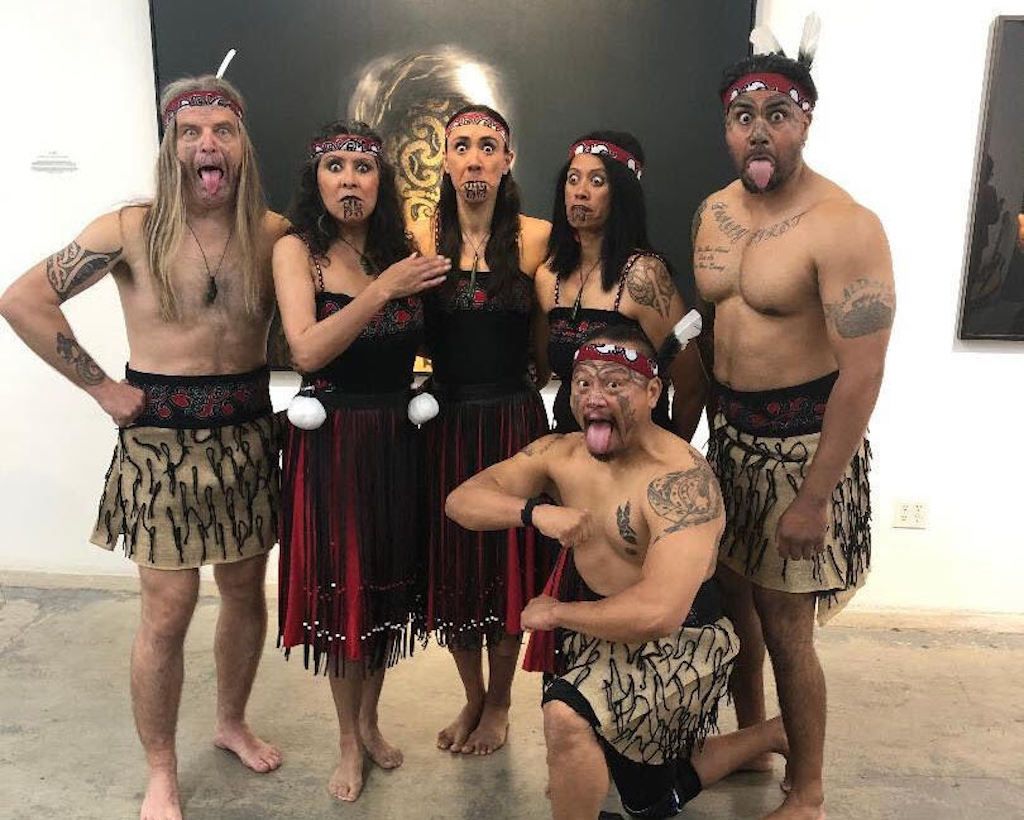 The practice of Haka for Māori women

That haka are reserved for men is a common misconception, says Learn Māori Abroad founder Amelia Butler. Raised in Auckland and a longtime resident of Los Angeles County, Butler initially founded the company to share the Māori language and culture with people outside of New Zealand before incorporating haka workshops into her programming. She now teaches workshops to communities across the United States, from the world arts and culture department at UCLA to corporate employees as a team-building exercise.

On more than one occasion, Butler has been approached after a demonstration by an attendee who had never seen a woman perform a haka. Though thousands of haka exist in Māori culture, some of which were written expressly for women like the “Ko Uhia Mai” haka that was composed for the Black Ferns by Māori elder and rugby legend Te Whetū Tipiwai, the practice is often identified with male warriors as a pre-battle ritual, a display of masculinity that the All Blacks ritual seems to perpetuate. Yet, ironically, the “Ka Mate” haka that the team popularized is “actually about the power of a woman.” 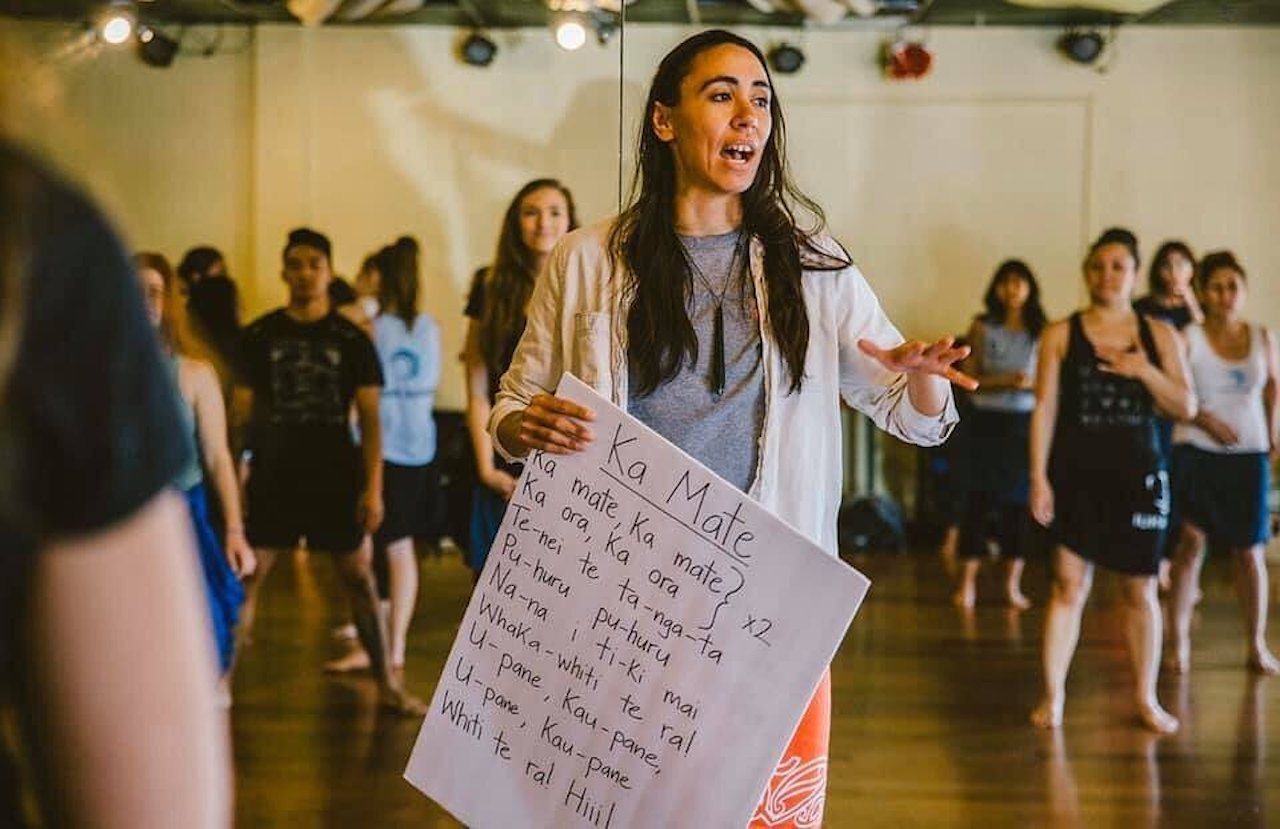 The most widely recognized haka, “Ka Mate” was written by Ngāti Toa chief Te Rauparaha around 1820. According to the Ngāti Toa tribe, one of two tribes primarily credited with originating the haka practice, “Ka Mate” chronicles the tale of Te Rauparaha seeking support from the Tūwharetoa tribe during a period of conflict. Fellow chief Te Heuheu agreed to help, sending Te Rauparaha to a relative who had the Ngāti Toa chief climb into a pit that his wife would then sit atop as attackers advanced. As the lyrics tell, it was her womanly energy that ultimately weakened the opposing forces and “caused [the sun] to shine again.”

Haka do differ between men and women. Rather than assume a wide, low stance with bent knees, women perform haka in a more upright, neutral position with their feet roughly shoulder-width apart. Facial expressions, or pūkana, also differ: While big, bulging eyes are customary for performers of both sexes, men also stick out their tongues while women traditionally purse their lips and turn down the sides of their mouths in a sort of frown.

In part, Butler attributes these variations to New Zealand’s colonial history. “When the British came they brought with them a lot of their own systems, including the patriarchy,” she says, imagining that prior to Western influence Māori women were “getting down and dirty just like men.” Yet growing up in Auckland, Butler remembers instances when she and her female peers were expected to dance poi, another Māori dance, on the occasions their male counterparts would dance haka. “So even as a woman teaching the haka, I had to confront my own internalized patriarchy growing up in a Western context,” she says. 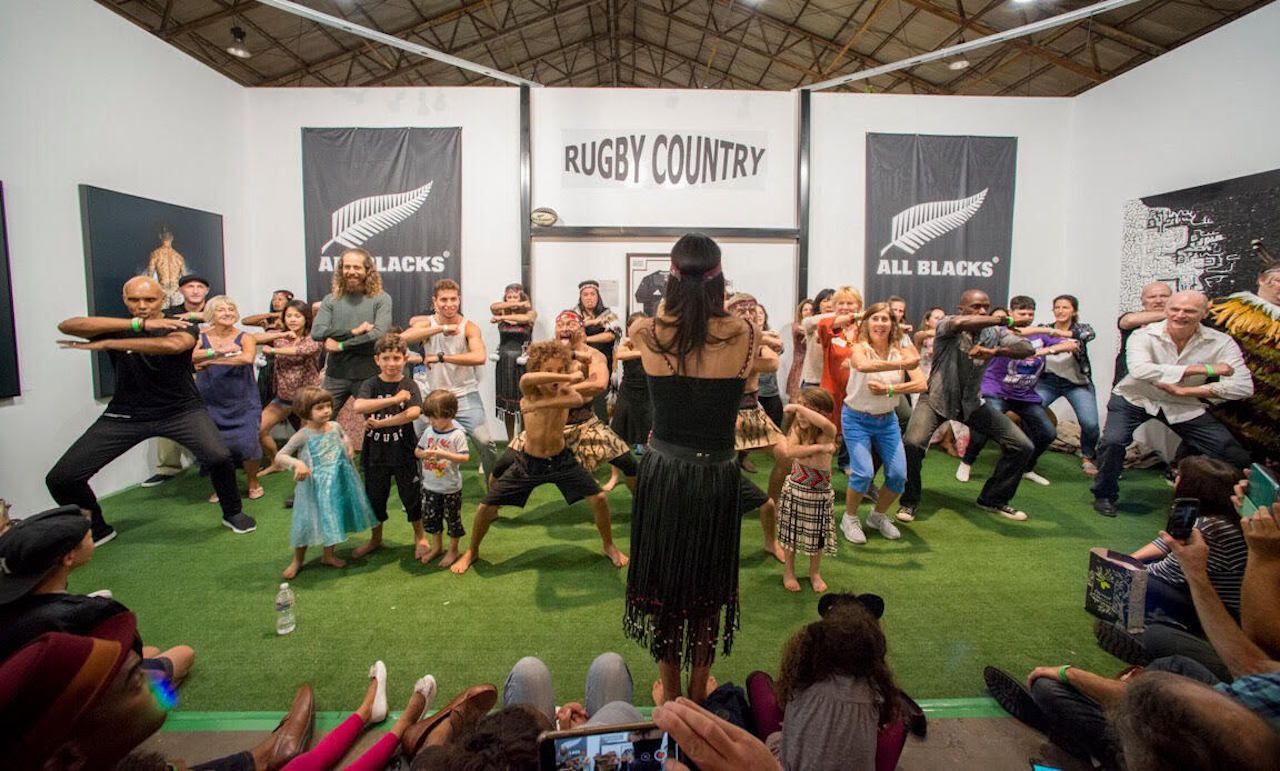 Her decision to teach haka has raised a few eyebrows from women back home. But as one of few Māori people sharing indigenous practices in the United States, and to her knowledge the only woman in the country currently teaching haka, Butler believes that spreading Māori culture can help empower others, not just women but Americans at large.

Māori culture places a strong emphasis on identity through ancestry, a concept that’s muddled for many Americans. “It’s very important for us to know who we are and where we come from,” says Butler, explaining that Māori are raised not only to know which tribe they’re from but also which is their mountain, river, or even the canoe that their ancestors arrived on. She’s seen firsthand how impactful this indigenous model of thinking can be to Westerners who leave her workshops inspired to learn more about their own ancestry.

Haka, specifically, can also be a powerful tool. Butler describes it as a “way of tapping into your authentic self” and working through things that are “causing some level of pain.” 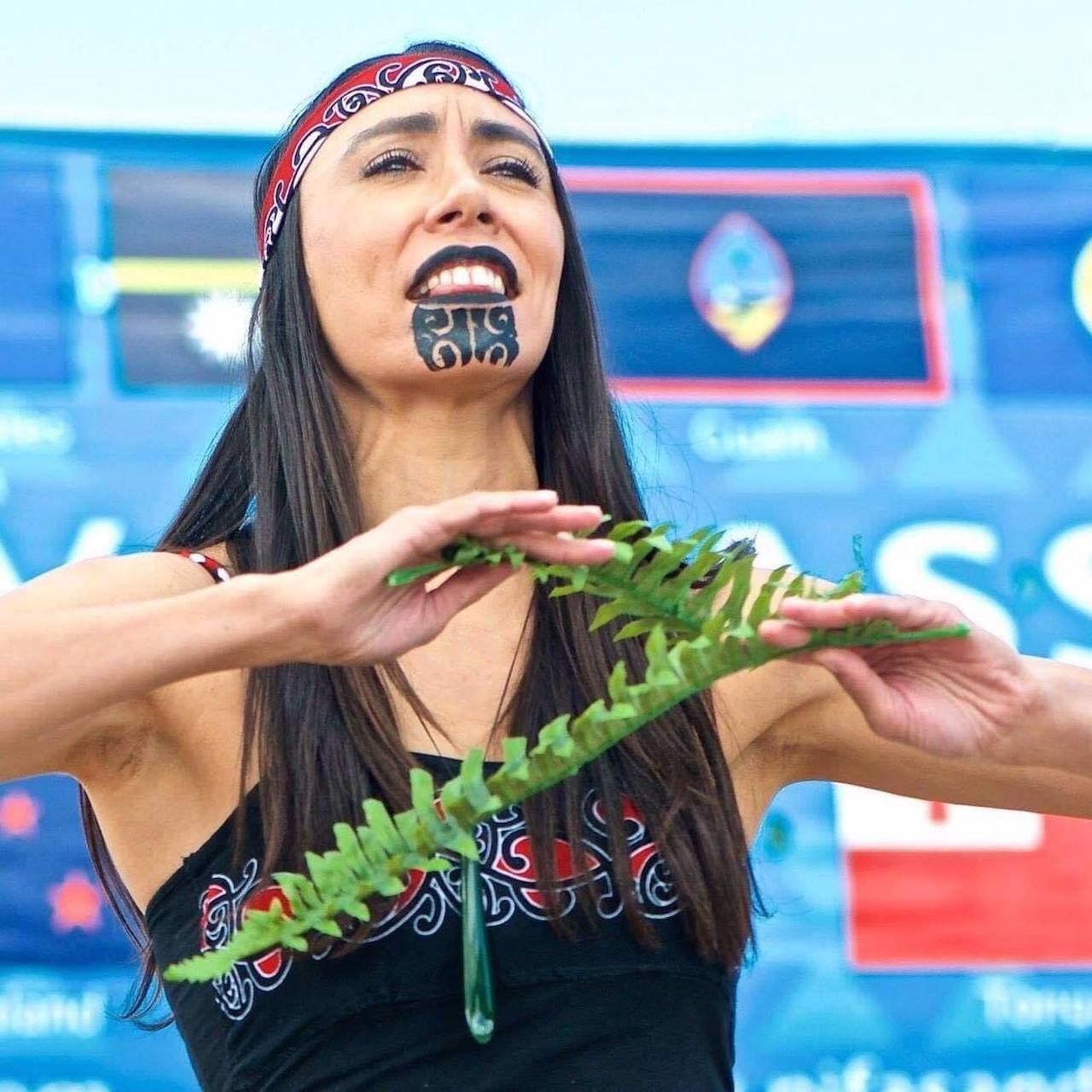 Demonstrations like the haka performed outside the United States consulate in Auckland last summer during a Black Lives Matter rally and the one performed by students in Christchurch following the mosque shootings in 2019 testify to the healing power of the practice. Both were performed by mixed-gender groups. Elsewhere in 2019, Māori artist and activist Mihirangi led an all-female haka workshop in Montreal to unify women amid the Missing and Murdered Indigenous Women and Girls (MMIWG) crisis that plagues Canada and the United States.

A sacred, spiritual, and emotional exercise, the haka is not inherently more powerful for Māori men, women, or even children. But clarifying the misconception that women are excluded from the practice and encouraging haka as a means of self-expression can be especially empowering for women. This is particularly true for women who have been conditioned by patriarchal norms. Butler, who counts herself among this group, has witnessed this many times in corporate settings where the majority of the employees are male. 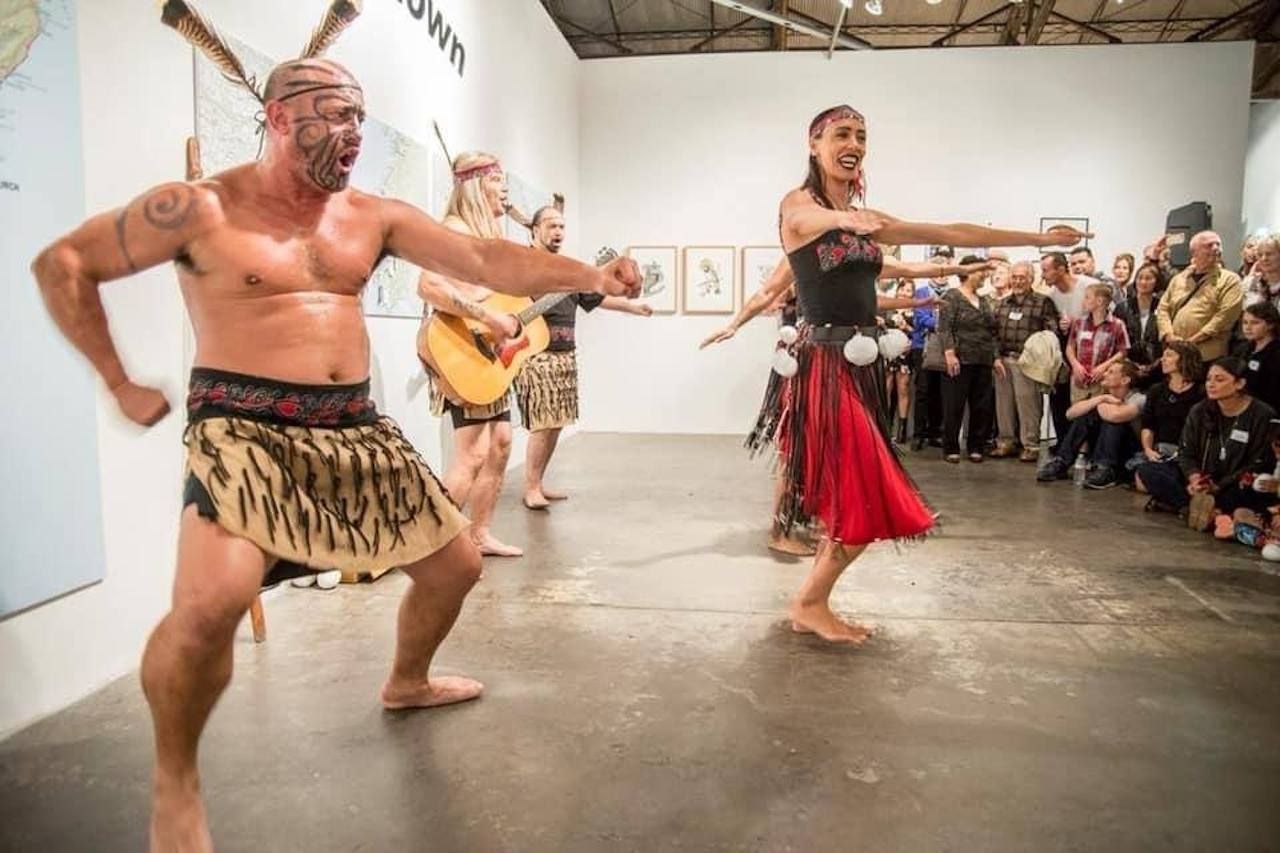 Regardless of whom Butler is teaching haka, poi, or the Māori language, she views her ability to share these indigenous practices as a gift she’s able to give others, albeit one she gives carefully. In an era that’s sensitive to cultural appropriation, Butler takes seriously her responsibility to both dispense and protect her heritage. Haka are sacred dances, after all, that should only be taught, and in many cases performed, by Māori. Whether those Māori teachers are male or female, on the other hand, is equally respectful of the tradition, a fact that Butler is proudly proving at every workshop she leads.

CultureHow Native Arctic Women Are Taking Back the Art of Inuit Tattoos
Tagged
Culture
What did you think of this story?
Meh
Good
Awesome